With the advent of possession-based football, many of the top teams have adopted a model that allows them to have greater possession. However, possession has to have a purpose – an output. As Pep Guardiola put it, “I loathe all that passing for the sake of it, all that tiki-taka. It’s so much rubbish and has no purpose. You have to pass the ball with a clear intention, with the aim of making it into the opposition’s goal. It’s not about passing for the sake of it.”

With that being said, let’s do a data analysis of the passing of the top 5 Premier League teams to see whether their passing is just being made for the sake it or if it has some real quality. 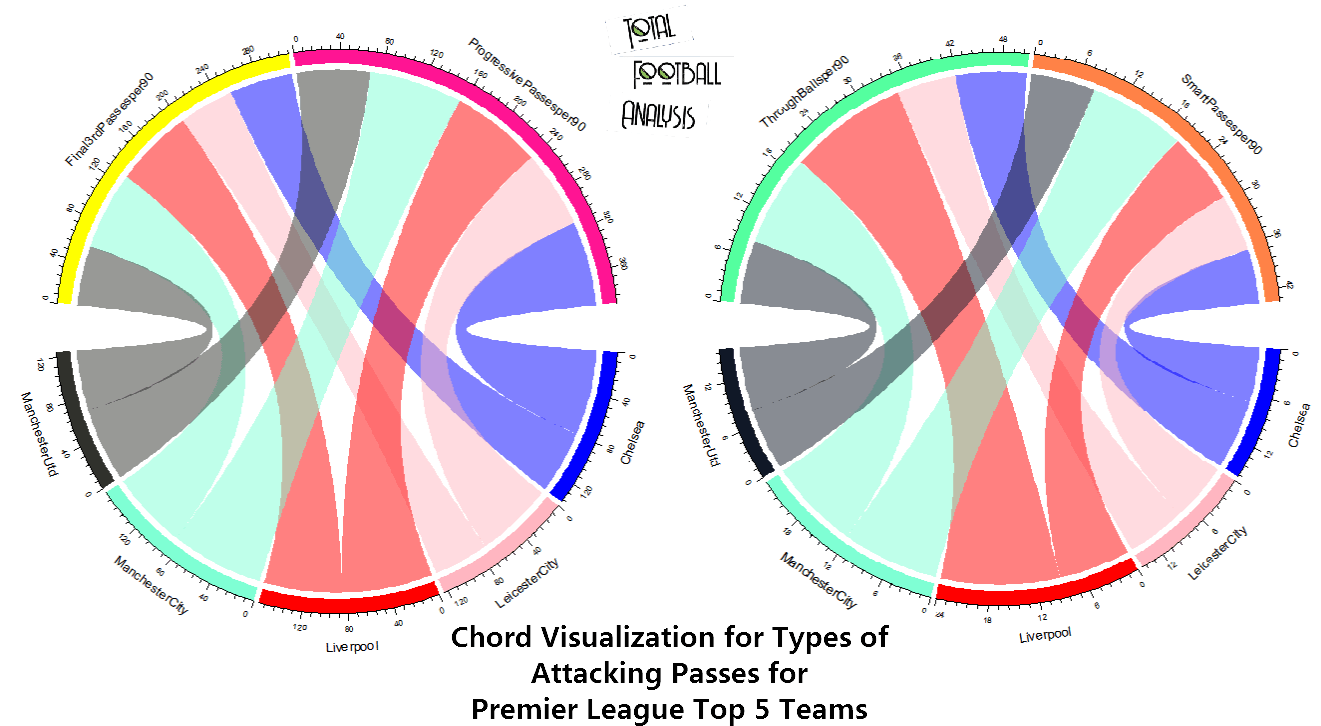 Here we have something that is called a chord visualization. It looks complicated at first but upon inspection, it becomes relatively easy to understand. Each team has a different colour and streams – those are the ribbons that divert. For example, you’ll see Liverpool’s red being diverted into two clear ribbons. These streams have a size attached to them and they end up in a metric – which is graphed in the upper hemisphere. The size and the location of these streams tell you the team’s performance in that statistic.

So as an example, let’s analyze Chelsea. They are in blue in both the chord visualizations. Let’s look at the first chord visualization – the one on the left. You’ll see two streams of blue. The first one leads to the metric Final 3rd passes per 90 – highlighted in yellow – while the second stream leads to the metric Progressive Passes per 90 – highlighted in dark pink. Let’s look at the size of the streams. The second streams is bigger in width than the first one. This indicates that Chelsea, as shown by the data, play more progressive passes than they do passes to the final third per 90.

These chord visualizations are helpful because you can look at a metric and clearly see which teams make more of these passes. So as an example, let’s look at the second chord visualization and let’s look at the metric “Through Passes per 90” – highlighted in green. In that metric, we see all the teams with their respective streams. Can you identify the team that plays the most through passes per 90? If you said Liverpool, you’d be right! Looking at Smart Passes per 90, we see that the same Liverpool take up a smaller area indicating that Liverpool play more through passes(passes that put a player through) than smart passes(those that break lines to gain a significant advantage).

Apart from seeing which team performs the best, you can see the differences in how one team players. Let’s continue with Liverpool. In the first chord visualization, we see Liverpool performing relatively good in the category final third passes per 90. However, the same Reds perform relatively poor in the category of progressive passes per 90. Using this, and the second chord visualization, we conclude that while Liverpool are more clinical passers. They record a high amount of final third passes per 90 of which a high amount are bound to be through passes. This makes sense because Liverpool are a hybrid team – they aren’t defined by a singular philosophy other than to win and play intensely. This is in contrast to Manchester City that stands out in every attacking category as Guardiola’s coaching requires City to play a more defined and structured play.