Pep Guardiola, the Manchester City manager, believes in passing but not in ‘passing for the sake of it’.

The above words are extracted from the book Pep Confidential: The Inside Story of Pep Guardiola’s First Season at Bayern Munich.

The Catalan’s current team Manchester City certainly live up to these words. Manchester City are known for scoring some excellent team goals since Guardiola took over, through their brilliant fluid movement & patient passing moves. In 2018, City scored a 44-pass (the most at that time since September 2015) goal against rivals United. The move also took 2.13% of the entire match time to create. Guardiola values players who are good with the ball at their feet (even for the role of reserve goalkeepers) and he believes that by passing the ball, rather than passing to keep the ball moving, the passes have purpose: to move the opposition, which the passing profiles look to portray. 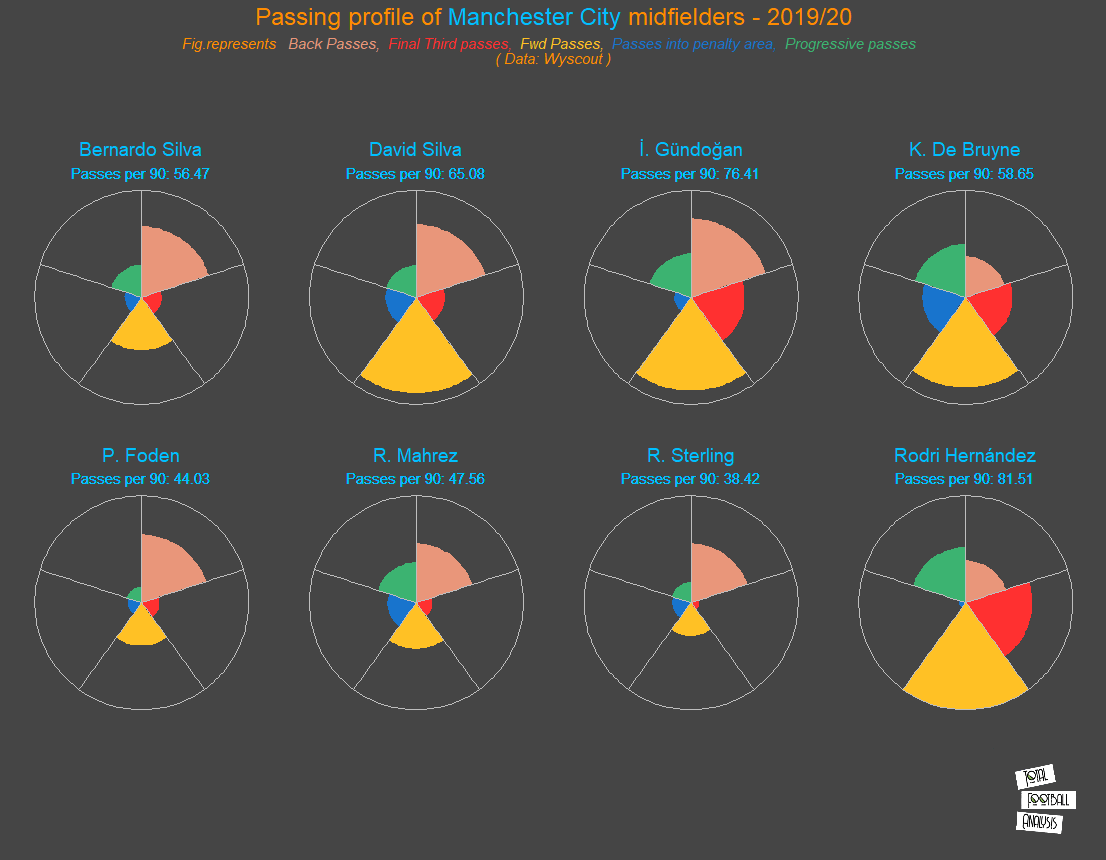 The above visualisation is called a pie chart. Looking at the visualisation, we come to realise who are the key players in Guardiola’s philosophy – the players who keep the Catalan’s passes ticking. For reference, different types of passes are indicated by different colours. It is no surprise that Rodri is top of the pile for passes per 90 and forward passes per 90 given how desperately Guardiola wanted him at Manchester City last summer. Gundogan is a close second for total passes per 90 but passes backward more often than his Spanish midfield partner. No surprises once again though, as the German midfielder was Pep’s first signing in 2016, and someone who Pep admires. The chart is also reflective of the fact that how difficult the job is for Phil Foden to replace David Silva’s shoes in the City line up. Kevin De Bruyne also seems to be the most diverse passer of all the City midfielders.

Manchester City are top of the table for almost every passing metric this season. One can also say that they have been one of the best in the world in passing and build up play since Guardiola took over. The Catalan has been very specific in what kind of players he wants at City and the common attribute in almost all of his signings is that every player is good with the ball at his feet , including the keeper. One can say, all these City midfielders have put up a passing show over the last few years and the show is not going to end anytime soon with Pep at the helm.