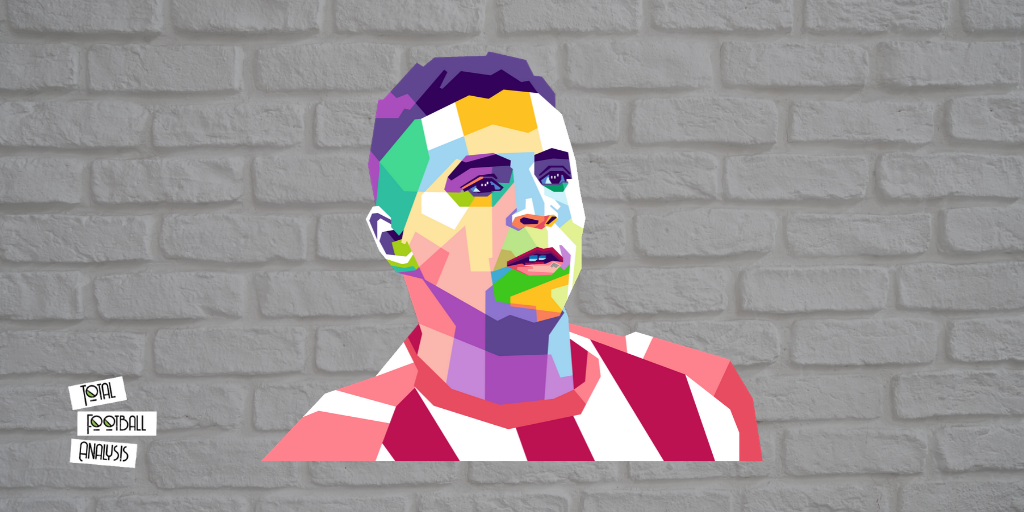 PSV’s sensational prodigy Mohamed Ihattaren is quickly gaining fame after months of consistently impressive performances in Eredivisie. The Netherlands youth international only made his debut with the senior side of PSV last season, coming in very late in the game in a 2-1 home win against Groningen. He then made a couple more substitute appearances. Finally, he made his first start in an away game against Excelsior in fixture 24 of Eredivisie 2018/19. Despite failing to register a single goal or assist last season, Ihattaren always performed magnificently, making good impressions every time he entered the pitch.

This season, Ihattaren is pretty much an ever-present figure in PSV, cementing his place in the first-team already and sitting above a few other senior members of the squad in the pecking order despite still being only 17. Though PSV are currently struggling with an inconsistent run of form, Ihattaren is still showing his brilliance in every game he plays in. In this tactical analysis/scout report, we will take a closer look at how Ihattaren is doing this season and why he should be among the ones to watch in 2020.

How is he doing so far this season?

Ihattaren has been playing very well and in an impressively consistent manner this season. The Utrecht-born midfielder has so far scored seven goals and registered nine assists in a total of 24 games in all competitions which is a splendid tally for a 17-year-old who’s currently spending his first full senior season at a rather high level of football. We’ll take a little peek at how well Ihattaren is doing so far in the 2019/20 season in all competitions through his statistics. Stats, of course, may not give you the full picture of how good of a player he actually is, but can serve as a preview before we go into more detail in this tactical analysis/scout report.

The Dutch prospect has also recorded a total of 5.2 xG (0.22 per game) and 8.7 (0.36 per game) xA so far, showing that he has managed to get himself high-quality goalscoring chances per game whilst also being able to fashion high-quality chances for his teammates.

Passing is key in his game and the stats also show that he’s doing well in this department. Ihattaren records an average of 43 passes per game with 76% accuracy. This may not seem like an extraordinary number at first, however, due to his advanced positioning in the game, which means he often has less time and less space to be able to shape up and execute passes comfortably, these numbers are actually very much acceptable.

Ihattaren has so far also been PSV’s most creative player, creating at least 1.5 goalscoring chances per game and 3.5 key passes (57% success rate) on average. He ranks third in chance creation, below Steven Bergwijn and Donyell Malen. However, the 2002-born advanced playmaker ranks first in key passes, with Bergwijn and Ritsu Doan trailing.

Ihattaren also ranks second when it comes to successful dribbles, averaging around 2.8 per game while Bergwijn once again tops the ranking with 3.2 per game despite having the same amount of average attempts with 5.5 per game.

Aside from dribbling, Ihattaren also shows good ability to retain the ball in a 1v1 attacking duel, averaging 10 attacking challenges per game with a success rate of 54%. He ranks second in this department, once again below Bergwijn who also has been in a monstrous form this season. The latter registers an average of 14 attacking challenges per game albeit with a lower success rate of 42%.

Style of play and role in PSV’s tactics

Ihattaren is a technically proficient player that possesses attacking flair and high level of creativity, making him very much an ideal player to play in a central advanced midfielder role. His elegance, explosiveness, technique, tactical intelligence, despite having rather poor overall physicality, actually make him quite similar to Anderlecht’s Yari Verschaeren – who’s apparently also on the list of many top clubs around Europe.

Ihattaren is exceptionally proficient in playing in tight spaces and under intense pressure. Although the 1.82m (5’11”) tall midfielder lacks strength to shield the ball and can often visibly be outmuscled by bigger players, he uses his superb touch and ball control, intelligent body orientation, excellent body balance, coordination, and agility, as well as explosiveness very well to be able to combine or avoid pressure.

The 17-year-old wonderkid is very effective in his movement. He tends to try to receive the ball with an open shape by receiving with the inside of his back foot, therefore not only allowing him to get a greater vision of the pitch, but also allowing him to manoeuvre towards any other direction quickly. This is, of course, a prominent sign of his tactical understanding and awareness which is already at an unbelievably high level at his age.

Despite being played as a central attacking midfielder, Ihattaren tends to sit in the half-space rather than staying central, most often sitting close to the right flank. You can see his tendency in his positioning from the heatmap below.

From the picture above you can see that Ihattaren is highly active in the opposition area, mainly involved in attack of course, but helps his team press too. Ihattaren is fairly disciplined in maintaining the team’s shape when defending, for example. When playing as an attacking midfielder, he’d quickly move to the half-space to help his team stay narrow when the ball is on the flank and create an overload on one side. However, he doesn’t always drop deep when in the defensive phase.

By sitting in the half-space, this allows PSV to create a triangular shape on the wing with Ihattaren and the wide players involved (full-back and winger). Though PSV’s tactics mainly rely on combination in central areas and around the half-spaces, the flanks are usually where they are the most dangerous due to the sheer pace and technique of their wide players who are able to deliver the ball into the box from the byline or make a deep penetration before cutting inside and taking a shot or deliver a low, pacey cross across the goal.

Ihattaren is very good at spotting space and his teammates’ runs, a testament to his excellent vision and awareness. Not only that, his ability to direct, time and hit his passes with perfect weight are also extremely crucial in his role as the advanced midfielder who often acts as the last pass in midfield.

His quick thinking and decision making as well as intelligent positioning are also very important and certainly some of his strongest attributes in the game. 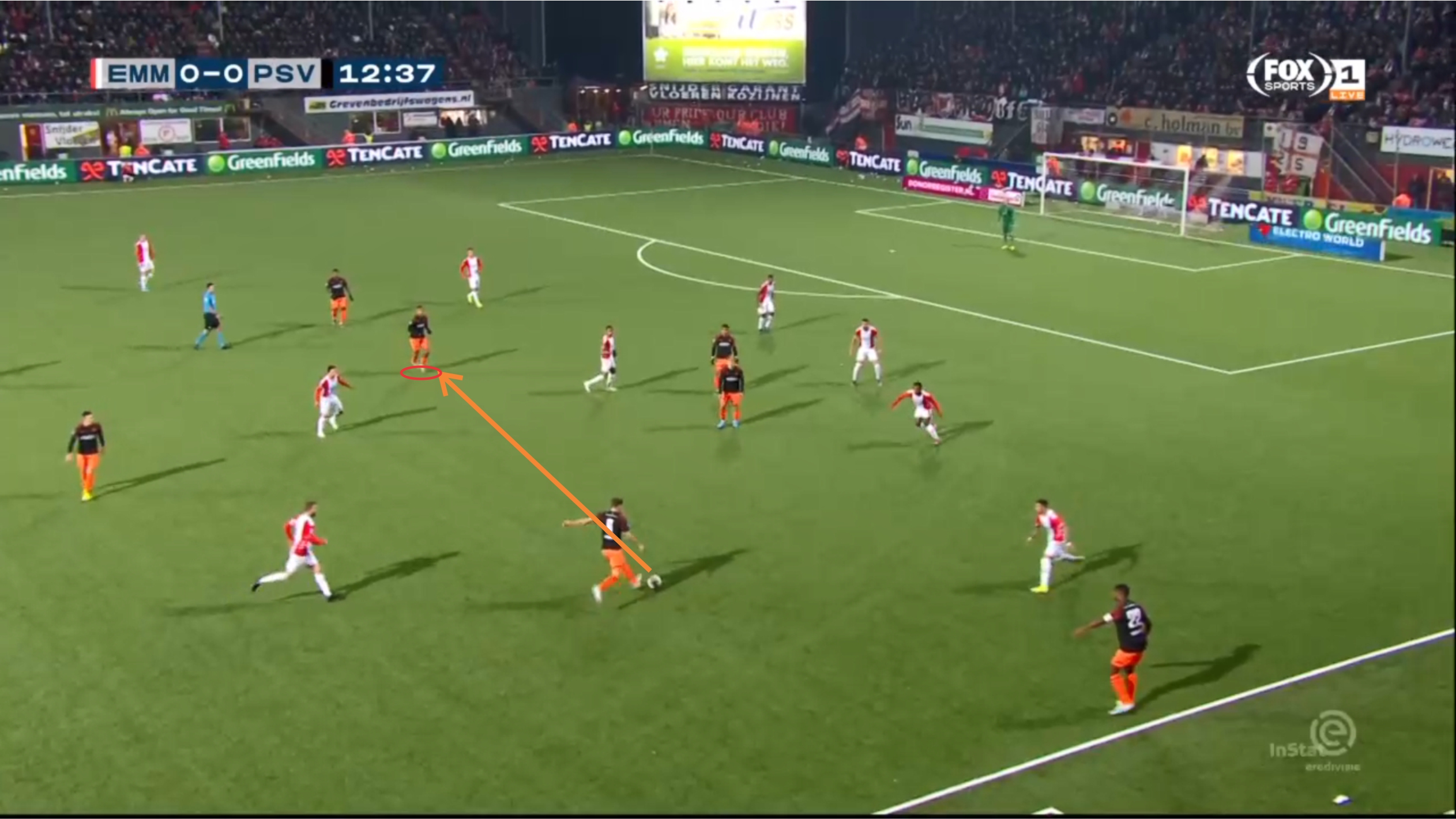 In the picture above, for example, Ihattaren saw the opportunity to receive the ball in a pocket of space and quickly moved into position. Schwaab spotted him and played the ball towards him. 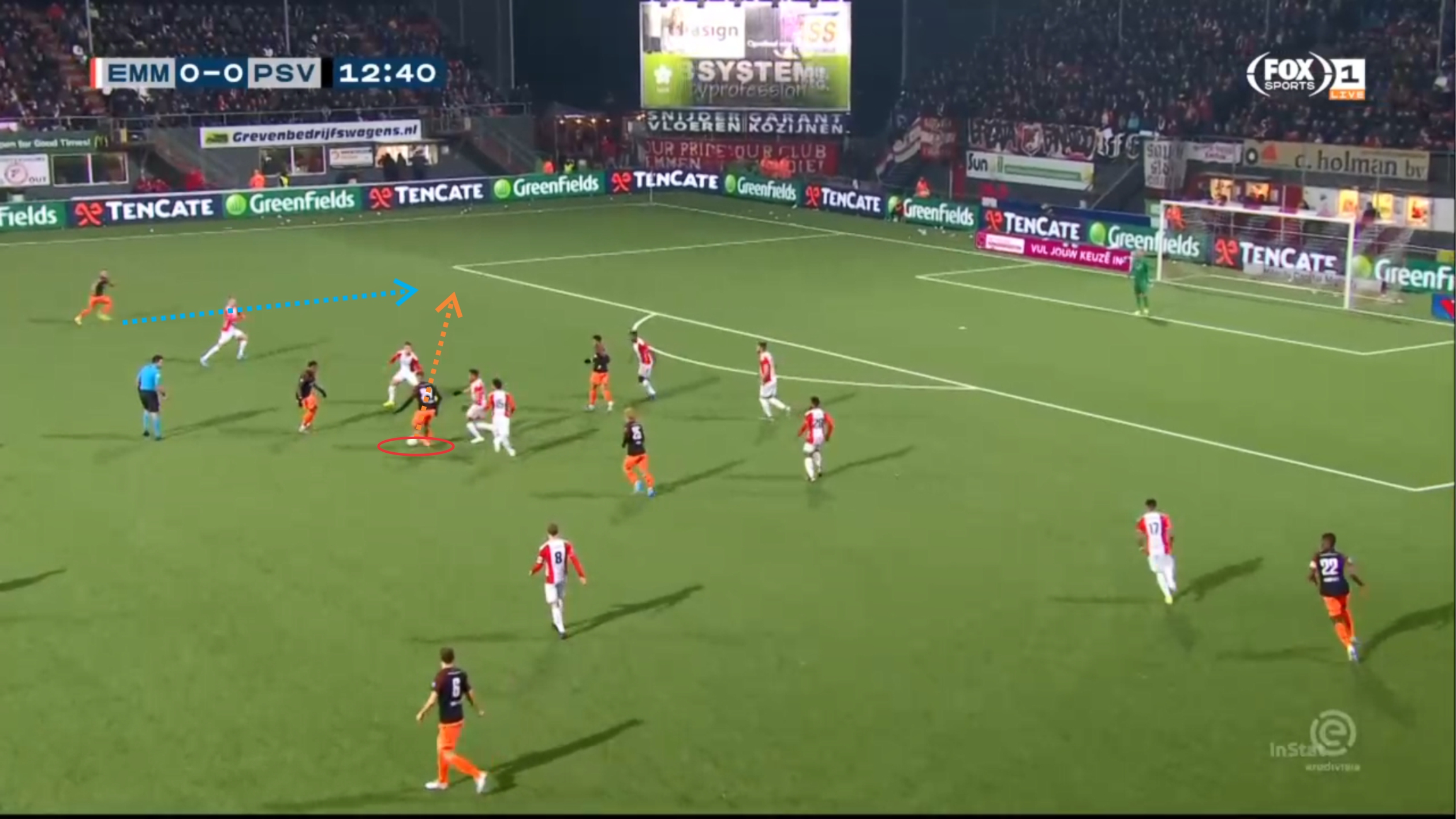 Ihattaren then received the ball and used his excellent mobility to quickly turn and try to slot one through into space and onto the path of Michal Sadilek who’s driving forward. He doesn’t even need to take a lot of time to see Sadilek’s run and the space behind the defence and he doesn’t take a lot of time to think. It’s as if he already knew what to do next even before the ball was played to him, making him one step in front of his opponents.

His smart off the ball movements also prove to be extremely useful in attack. Ihattaren’s a very clever player. He’s always focused, aware, always in the game and actively moving, looking for spaces to move into and spaces he can exploit.

He tends to position himself in a pocket of space and receive on the half-turn as explained previously, but when the ball is in the final third he likes to arrive late in the box.

Above we can see Ihattaren’s movements when the team are already in the final phase of attack. In this situation, Ihattaren initially delays his run, allowing Malen to drag the Sporting defender deep, thus creating a gap and space to exploit around the edge of the box. Ihattaren then utilises his explosiveness and bursts into position and takes a powerful and accurate first-time shot which is straight into the gloves of the goalkeeper.

As mentioned previously, his main weaknesses are his physicality, mainly his lack of strength and stamina.

His lack of strength can often be masked by avoiding physical challenges and pressure and relying on using his technical proficiency and tactical intelligence. His low winning rate in defensive duels (31% from 3.38 attempts) and aerial duels (33% from 1.6 attempts) are some clear indicators of his lack of physical strength.

When it comes to endurance, there are some indicators that we can see too. The first one is his body language. Often after a long-distance run after a transition (attacking or defending), Ihattaren is visibly tired, with his hands on his hips. Sometimes when his team loses possession in the opposition half, he also starts his run very slowly, seemingly uninterested to track back.

The second one would be his apparent drop of performance in the second half. As mentioned previously, Ihattaren would occasionally refuse to track back or tracks back very slowly. He also seems to be a bit less interested to contribute and less disciplined in defence, especially in the latter stages of the game. In a bid to save his energy in a game, Ihattaren tends to be more “calculated” when pressing rather than aggressively running around all the time. He tends to keep his distance from a potential passing option and will only start pressing when the ball is played towards him. Again, using his intelligence despite his lack of physicality.

Ihattaren is truly an amazing player. One that can definitely grow to be a world-class midfielder someday if developed properly. The 2002-born prospect is still so young but has shown so much. 2019 has been a brilliant year in terms of development for Ihattaren and he can only get better next year.

PSV are currently struggling domestically and in Europe, and the team had to say goodbye to coach Mark van Bommel despite delivering a brilliant campaign last season. Hopefully, the next man that takes charge will be able to maximise Ihattaren’s ability and realise his potential.

Interest is high for the 17-year-old wonderkid with Barcelona and Chelsea rumoured to be in the race to sign him. Though it is unlikely for PSV to want to sell Ihattaren in January, we might as well see him in a different jersey in the summer of 2020. Regardless of where he plays though, he is definitely one of the most exciting players that you should watch in 2020.