This week’s set-piece analysis again looks at a free-kick goal scored by Everton, but this time the defending of the opposition having a much larger effect on the chance being converted.

We can see the scene starts like this below, with Everton more or less lined up in two pairs and a player at the back post. The players in the pairs stay fairly close to their respective partners in order to benefit each other’s movements. We see at the front post, Richarlison and Doucouré overload the same link in the zonal chain, while in a more central area, the pair of Dominic Calvert-Lewin and Michael Keane are staggered one behind the other. 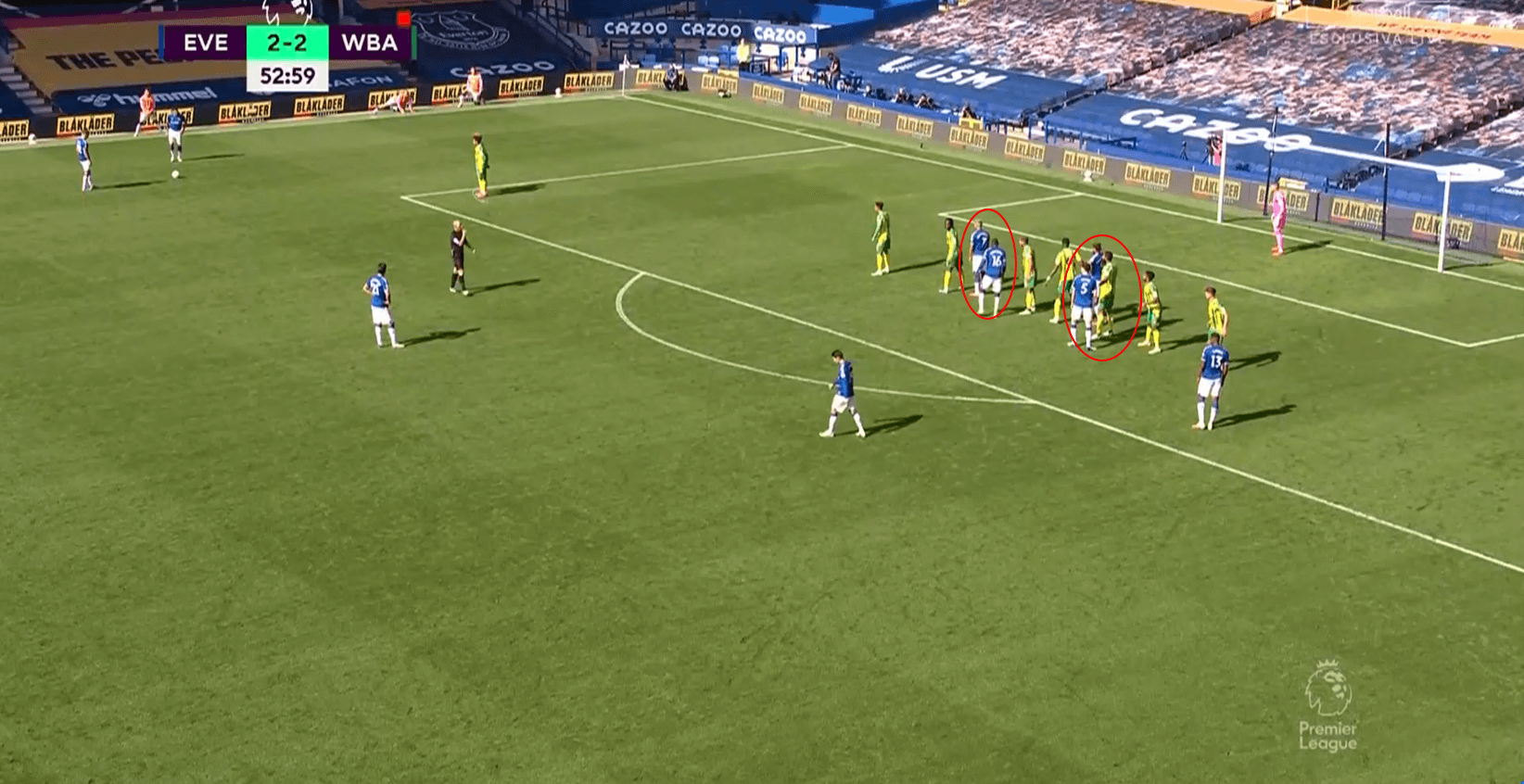 This staggering from Calvert-Lewin and Keane means that Keane can start behind the striker and curve his run around him. Calvert-Lewin starts higher and closer to goal, and so when Keane runs around him from a deeper area, it allows him to place a block in the direction of Keane’s run. As a result, if West Brom were to try and follow Keane, Calvert-Lewin would block. As it happens though, Calvert-Lewin’s marker just stays with the striker, and Keane’s marker stays zonal and sticks to his position.

Something very interesting about West Brom here is that they are almost defending the free-kick backwards, as often defenders mark the player closest on the near side of them (right side in this case) by standing on the far side. Instead though, we see Calvert-Lewin has far side positioning on his marker, and so spaces open up on the near side. Traditionally we would see Calvert-Lewin’s man mark Keane here, and vice versa.

As a result, Michael Keane is allowed a free run unmarked on the near side of Calvert-Lewin’s marker. Furthermore, if we track Richarlison’s runs through the screenshots, we see Richarlison’s marker also marks him from in front initially rather than staying behind and on the far side, and so Richarlison simply drifts off his marker and into the space behind. Usually, this space would be contested by a marker following Richarlison from his far side, but West Brom’s marking is strange.

As a result, Richarlison is allowed a free header and Keane is also in a position to head the ball. Richarlison heads the ball and Keane scores from the rebound, and so those initial movements allow Everton to score and make the score 3-2.