On Sunday Spurs played against the Saints and it was a goal festival which ended with 2-5 on the scoreboard. Both Harry Kane and Heung-min Song were absolutely amazing. Son scored four goals while Kane assisted Son for all of his goals and scored one as well. Son showed clinical finishing in front of goal, shooting four times and scoring four goals. In the Fantasy Premier League, more than 485 thousand players transferred Son out after the first gameweek, which backfired quickly and his 24 points were the most in the second gameweek. 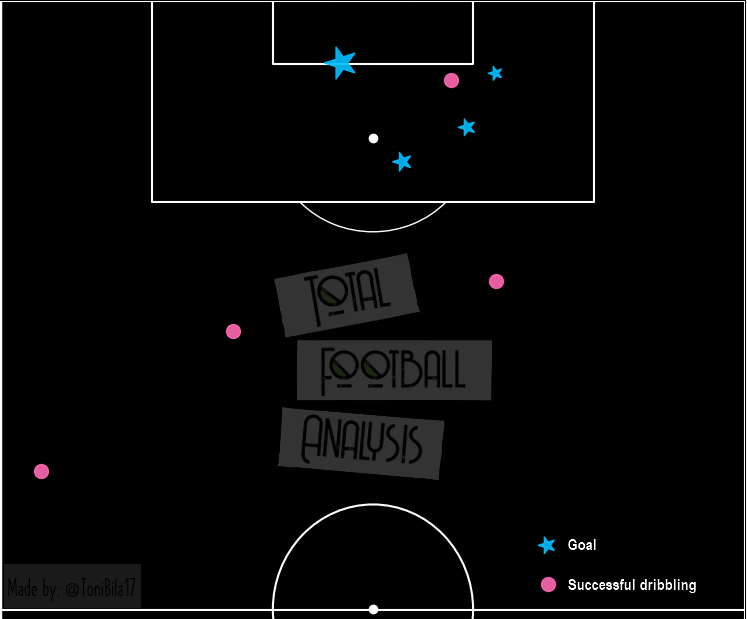 The map above shows from which positions Son scored his goals. The bigger the star means a bigger xG value of that shot. Pink dots show us positions where Son made successful dribbles. It is impressive that he was 4/4 in that department too. All of his dribbles in the match were successful. Once again Son displayed his amazing ability to shoot with both feet equally well. The partnership between Kane and Son was extraordinary. Son’s off the ball movement and Kane’s precise through balls were an unsolvable issue for the Southampton defence.

Son showed early in the season that he is at his peak and this is a good start for him to try breaking his best goal-scoring performance in the Premier League, which was 14 goals during the 2016/17 season. It is hard to expect this kind of performance on a weekly basis, but this performance left us wondering whether this will be Son’s best season of his career.

This week’s set-piece analysis again looks at a free-kick goal scored by Everton, but this time the defending of the […]