Bayern Munich arguably made one of the most underrated signings of the transfer window in Marc Roca. The  €15 million price tag is a bargain for analysts that have been tracking the Spaniard. The 23-year-old, deep-lying regista stood out in La Liga in contrast to his club Espanyol, who were ultimately relegated.

Left-footed and 1.84m tall, Roca’s elegant ability on the ball with a straight-backed posture is characteristic of the many great number 6s produced by Spain. Bayern Munich have had a history of scouting metronomic Spanish midfielders that have brought their fans a ton of joy. This scout report aims to answer the question, “Where does Marc Roca place in the pecking order of the state of the art laboratory that is Bayern’s midfield?”

We provide a tactical analysis of how Marc Roca’s attributes fit into Bayern’s midfield. We first conduct an analysis of his passing and defending repertoire. After an overview of Bayern’s tactics, we compare Roca with Bayern’s centre midfielders through key statistical metrics. His transition shall be in phases. At first, he will come in as an understudy, filling a spot in the squad originally vacated by Thiago’s departure to Liverpool. Consequently, we believe that he would provide a new dimension to Bayern style of play.

Roca’s most developed attribute is undoubtedly his long-passing. He routinely plays 40-yard cross-field balls whilst maintaining a straight back, This is indicative of a strong ball-striking technique and raw power. Consider the following illustration:

Roca normally opts for the line-breaking, progressive pass when he can.  He had an 81.3% pass completion rate to his progressive passes last season. More impressive is his pass success rate of 90.7% for passes further than a distance of 40m.  This underlines the point that his long-passing is the bread and butter of Roca’s natural game.

In 2019/20, the average long passes made per 90  in the Bundesliga was 3.3 as compared to La Liga’s 3.5. Roca’s penchant to move the ball in a more direct fashion adds value to Bayern Munich during transitions. Especially in a league known for its pressing, a quick cross-field long ball may likely give Bayern serious options on the counter.

Roca is no stranger to being pressed. Traditionally, a regista may need protection from his fellow midfielders in order to assume a deeper position and dictate the tempo. However, beating the press through good ball control is a fundamental trait required from a modern number 6. Consider the following position:

Espanyol are trying to get the ball out of danger from their opponent’s set-piece. With three players pressing him, Roca’s balance and ball control allow him to slip past and dribble the ball five yards. Furthermore, his passing abilities permitted him to send a perfectly weighted lob onto the flank under pressure to trigger a potent counter.

In addition to the said raw talent, Roca possesses a mature in-game IQ. Unlike the previous position which was a transition, Espanyol have sustained possession for a while in the following position.

Roca has two options for playing a shorter pass and the opponent’s left centre-back presses to mark his teammate on the right. His teammate on the left makes a diagonal decoy run. Roca’s reading of the flow of play, in conjunction with his intuition on when to release the pass, permit him to play a disguised lob to the furthest striker. The opposing right centre-back is deceived by Roca’s body positioning and line of sight as his target man is suddenly afforded a ton of empty space in front of goal.

The Spaniard notably shows a strong understanding of players around him. He applies this understanding in his pressing aimed at disrupting his opponent’s build-up play from the back. Roca is a number 6, but routinely ventures further up the pitch to trigger a duel with the opposition’s number 6. 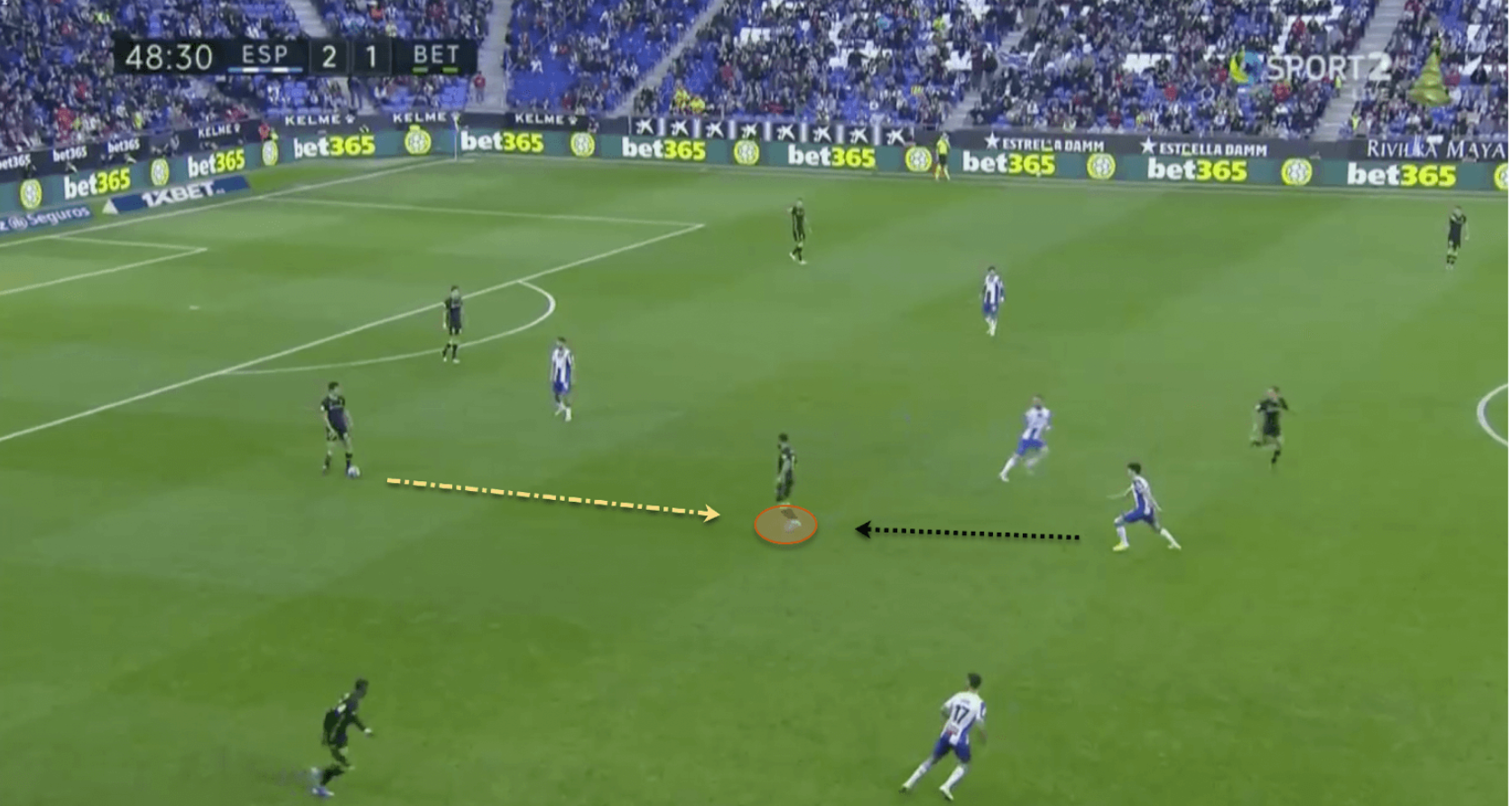 In the above image, Roca’s charge at the opposition midfielder’s blindside is unanticipated. He then imposes his physicality to lunge in and win the ball high up the pitch. His positional awareness in this situation is relevant, as he commits to the challenge knowing that his teammates are well-positioned to win the second-ball.

For a regista, Roca has a well-rounded skill set equipped to fit into a variety of systems. This is especially true for a Bayern team that normally enjoy the majority of possession, have a high defensive line and more importantly, have world-class attackers. Regardless, a smooth transition from a relegated Espanyol to the champions of Europe is over-optimistic.

The champions of Europe would not have been able to run riot in Europe without a metronomic backbone. With Thiago’s departure this season, Bayern play their signature 4-2-3-1 with Joshua Kimmich and Leon Goretzka as the double pivot.  In addition to the high standards of pace expected from every Bayern player, their centre-midfielders have distinct roles. Kimmich is an orchestrator whereas Goretzka is box-to-box number 8. The unique roles of Bayern’s double pivot is observed in the following sequence: 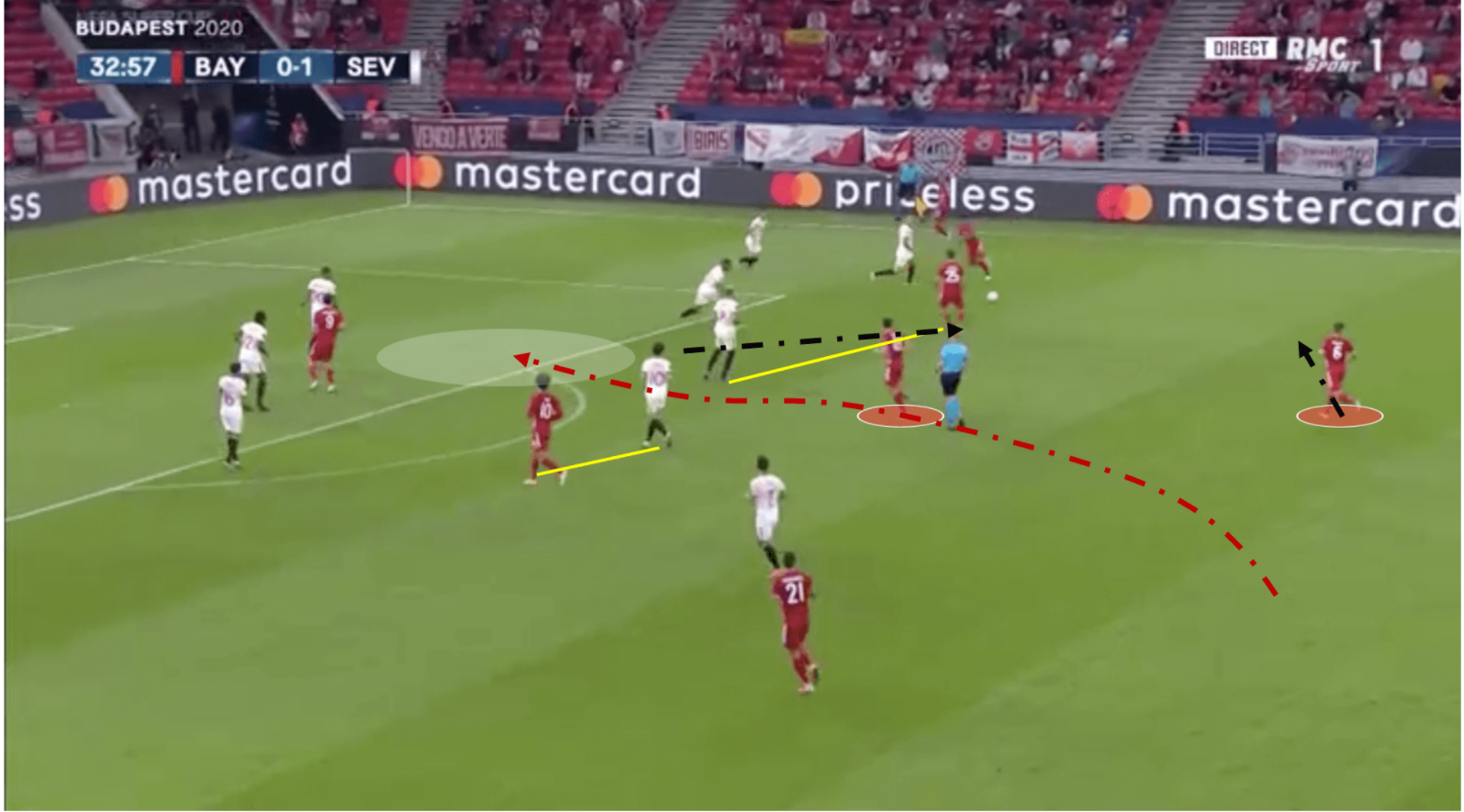 Kimmich’s pass initiated an overload on the right. Mueller’s decoy run drew the defender out of his position leaving an ounce of space behind him. This allows Goretzka to drive into the box becoming the target of the passing sequence.  A neat interplay with Lewandowski thereafter led to a model Bayern goal. Therefore, Bayern’s 6 routinely initiates overloads on one flank and their number 8 overloads the centre to pose hard questions to the opposition’s marking.

Roca’s profile is distinct. But in the aforementioned stencil, he’s more similar to the playmaker role. Considering that Kimmich is the first name on Hansi Flick (or any manager’s) team sheet, Roca would realistically be in contention for the playmaker role in a rotated team. Alternatively, Flick could potentially utilize him whenever Kimmich slips in at right-back.

After integrating into Bayern’s style of play, Roca could bring a different dimension to their game as he’s a different type of playmaker -unlike what Bayern already have. While it’s still early to make substantial claims, his debut against FC Duren was an assuming glimpse into what can be expected. He displayed a mature performance- saw a good amount of the ball and didn’t misplace a pass. Equally, he played the double pivot like a single pivot. His relative positioning to Javi Martinez was more vertical than horizontal.  There were certain occasions where his positioning for a short pass was an inch overeager. 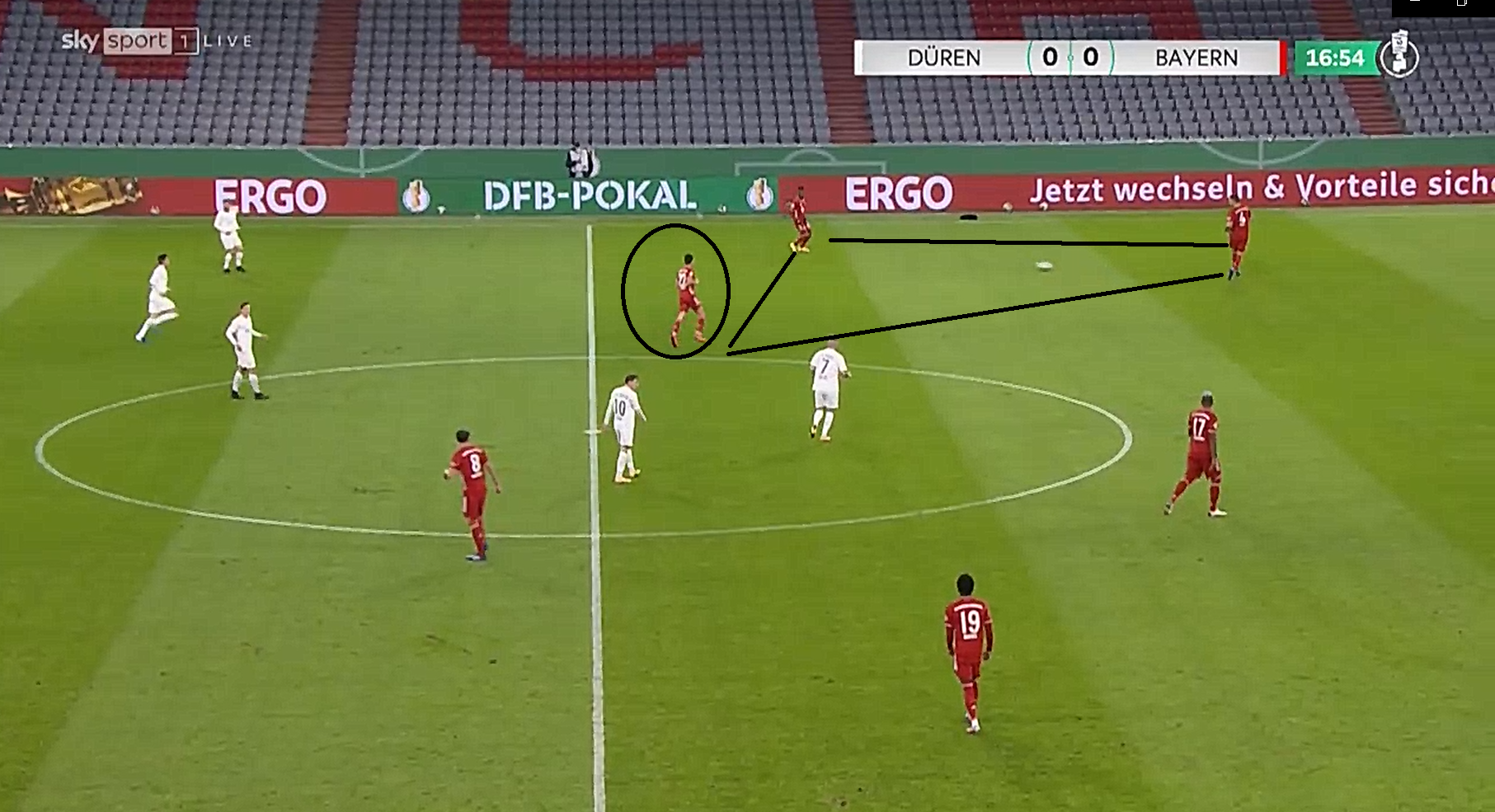 In the above image, aside from the fact that he’s the left pivot, he presents himself as an option at an excessively short distance. Bouna Sarr ultimately chooses another pass in lieu of the same. When on the ball, though, we were able to see glimpses of his understanding of the tempo required from the play. 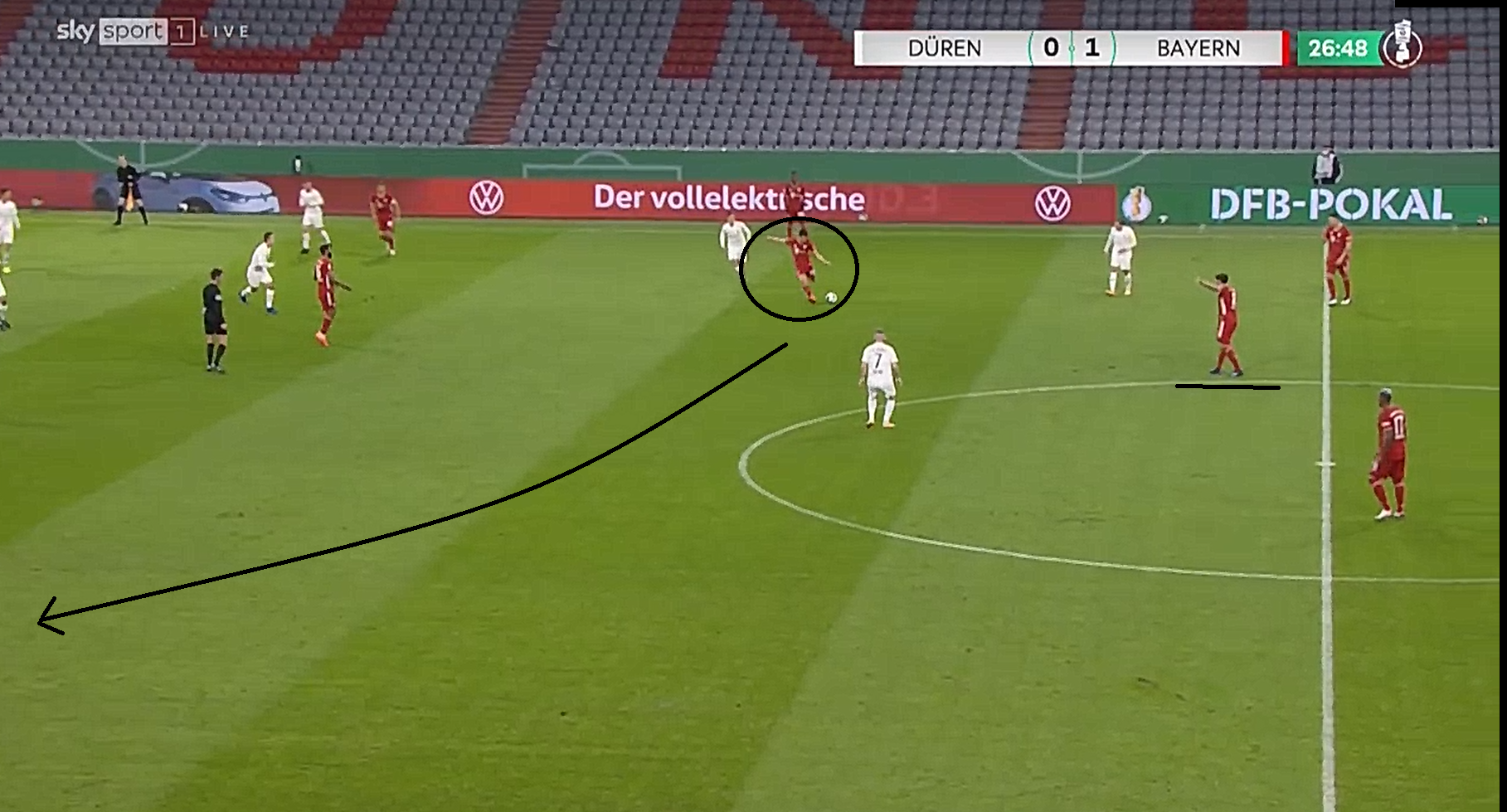 Roca intuitively ventures forward to be the tail of the diamond on the right-hand side. Seeing as the opposition team have players concentrated on the right, he effortlessly changes flanks onto Alphonso Davies initiating the start of a Bayern attack.

Hansi Flick appreciated his positional play as he subbed Niklas Sule for Angelo Stiller. With Martinez moving to centre-back, Bayern played a 4-1-4-1 in the second half with Roca as the single pivot. The 4-1-4-1 could be a fresh weapon Bayern could employ from time to time. For the time being, it complements Roca’s qualities as a modern regista.

In his cameo against FC Duren, Roca had the demeanour of a player trying to do a bit of everything from his half. This could be a potential side-effect after playing for a team that would require that sort of initiative. His transition from Espanyol to Bayern Munich must not be ignored in his first season of development in Germany.

Consider the effect of the team styles onto his defensive profile. In 2019/20, he averaged 2.4 tackles per game. In addition, his foul-card ratio suggests that he is quite adept at tactical fouls i.e. fouls in specific zones that are not enough to get carded but are aimed at halting the opponents’ tempo. This implies that Roca is a confrontational instead of preventative in his defensive performance. Consider the following graph that visualizes defensive metrics of La Liga midfielders last season. 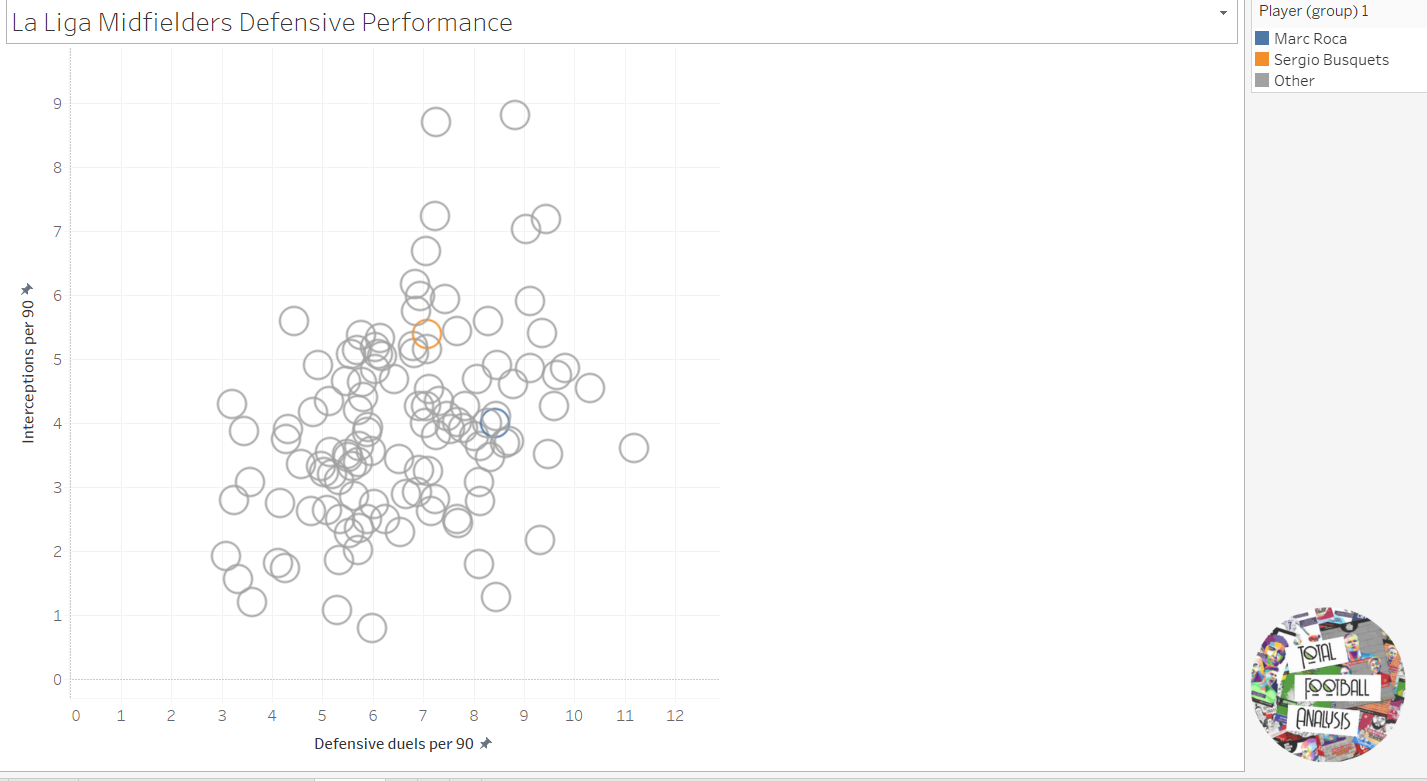 Barcelona‘s Sergio Busquets prevents attacking scenarios of opponents by having over five interceptions per match last season. Roca on the other hand engaged in more duels per 90. It is noteworthy that Roca will not engage in as many duels at Bayern Munich due to how they defend as a team. This is corroborated by the following image. 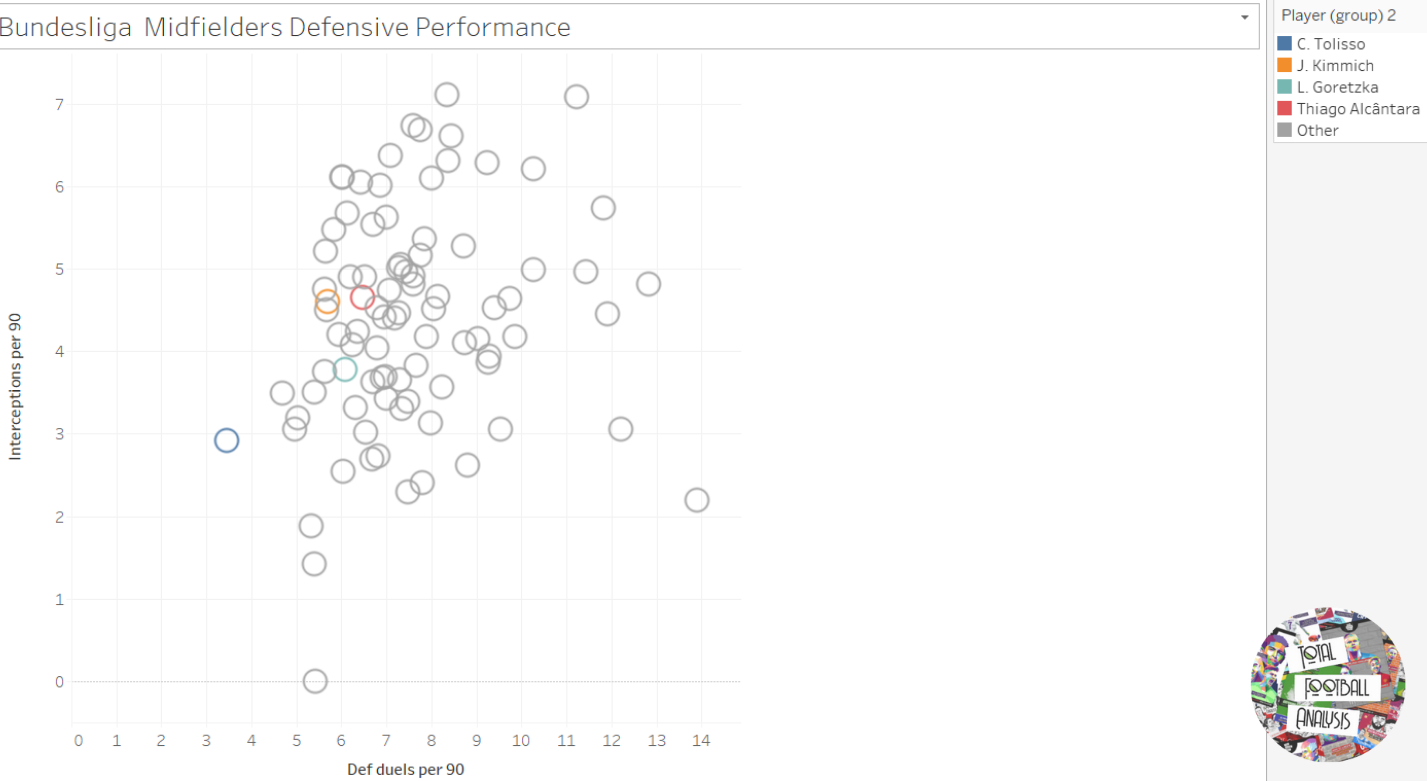 Interestingly, Kimmich and Thiago are more versatile in their way of defending due to a close duels to interceptions ratio. Whether or not Roca’s higher duels per 90 transfers from an Espanyol that were forced to defend a lot, to a Bayern Munich that have most of the ball, is yet to be seen.

We believe that despite the widespread acknowledgement of Roca’s defensive abilities among analysts, he may find it difficult to adapt to the defensive pace of Bayern Munich at first. In particular, he’d have to significantly improve his presence in the air- a trait that his counterparts Goretzka and Martinez excel at.

Conversely, in terms of distribution, he certainly makes the cut. The difference in styles of teams across leagues further underlines the talent. 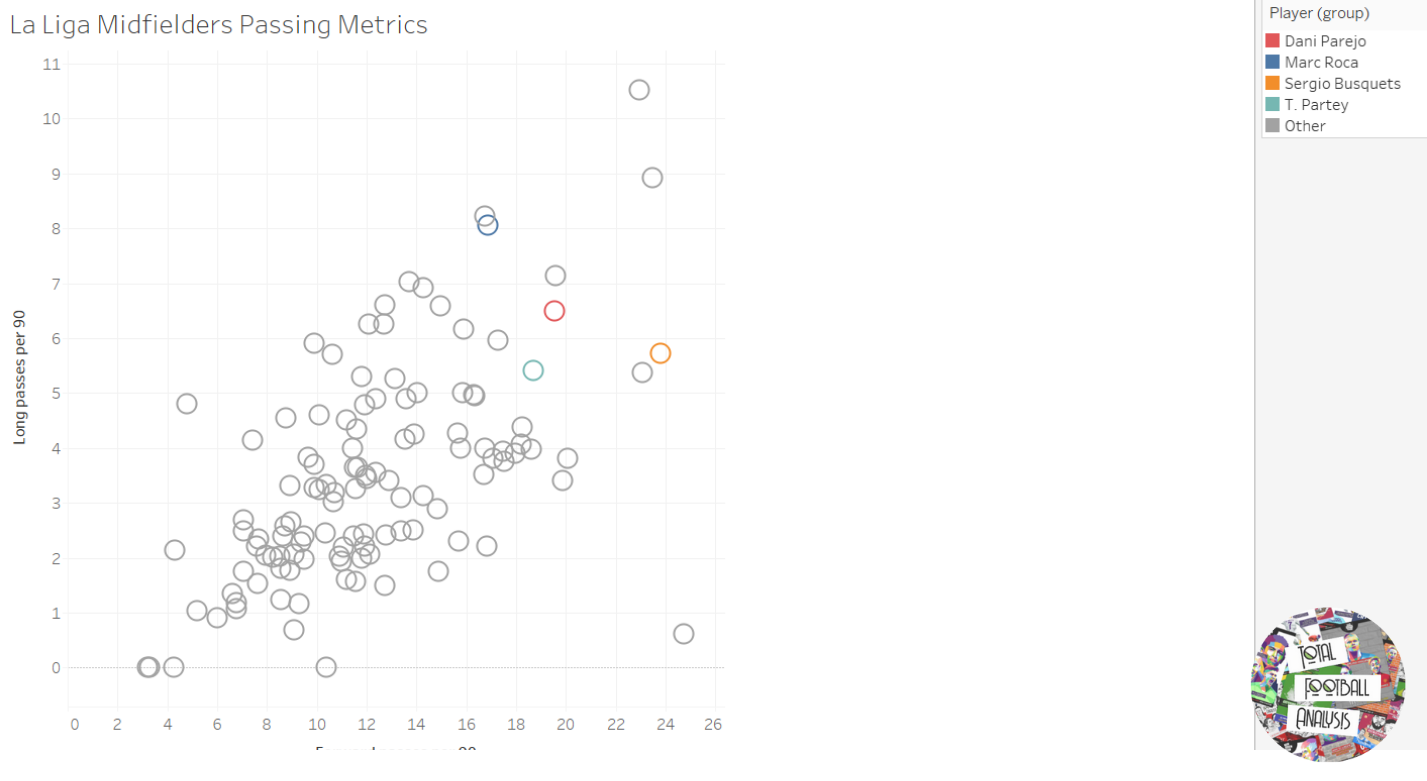 In terms of forward and long passes per 90, Roca was in the top cohort amongst the best midfielders in La Liga. The final position of Espanyol only reiterates these impressive numbers. His passing range stands out even amongst key Bundesliga midfielders visualized in the following image. 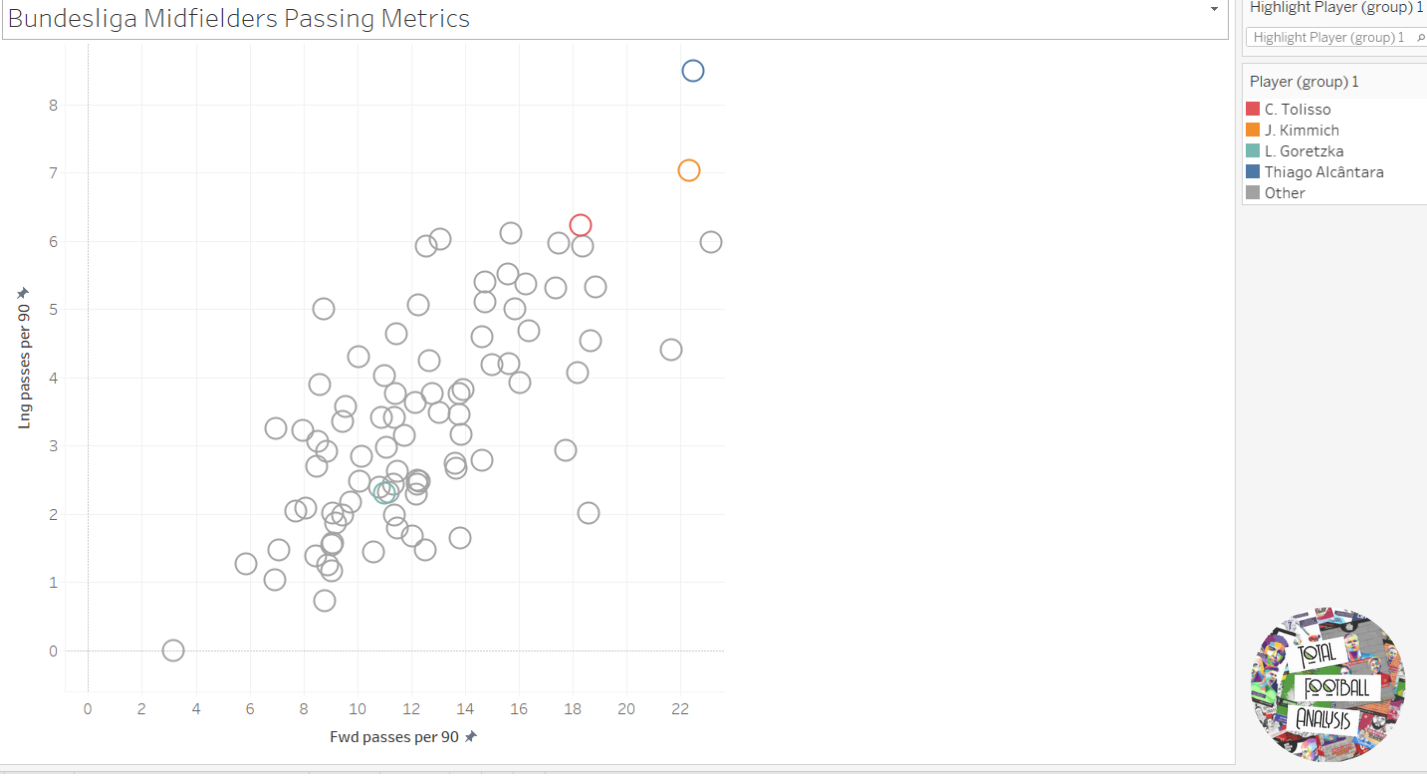 Considering the aforementioned passing metrics amongst midfielders in both leagues, Roca’s long passing is almost identical to Thiago’s. Furthermore, his forward passing numbers are more similar to Corentin Tolisso.

Overall, Roca already displays the technical qualities and passing range required to excel at Bayern’s midfield. While his defensive numbers are certainly present, the difference in leagues prompts us to exercise caution in making decisive claims.

For a  €15m price tag, Roca’s transfer is good business on paper for a club like Bayern Munich even if he warms the bench for most of the season. His integration, then, is one to monitor. His on-the-pitch IQ was certainly there on his debut. Moving up the pecking order from there will be his longest stretch.

In this scout report, we transposed Roca’s regista-like profile with Bayern’s elegant and industrious centre-midfielders. Furthermore, we conducted a simple data analysis to note that Roca’s defending and distribution has the potential to succeed in the Bundesliga.

We conclude that despite getting game-time in a rotated team, Roca has a skill set that is unlike any player Bayern have at the moment. His long passing resembles Thiago’s, and his physicality resembles Martinez’s. If he shows progress in the training ground, then there is no reason why Roca could not succeed at the pinnacle of European football. 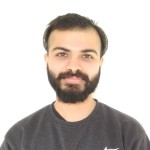