From ending the previous season at the bottom of the table, to being one of the competitors for a play-off spot this season, Hyderabad FC has gone through a complete transformation in the Indian Super League. Their new head coach Manuel Márquez Roca has played a significant role in the team’s success and is being widely praised by fans for his tactics, team selection and the general difference in the team’s environment this season.

The 52-year-old Spanish coach has a wealth of experience, having coached teams in the Croatian first division, Thai first division and in the lower divisions of Spanish football, before becoming a success story in the Indian Super League. He has also managed UD Las Palmas which has been in the spotlight recently for having brought through current La Liga giant Barcelona‘s prodigy Pedri.

In this tactical analysis piece, we will be performing analysis on Manuel Márquez’s tactics, both in and out of possession, and attempt to explain the reasons behind Hyderabad’s superb performances this season.

Hyderabad have moved to a 4-2-3-1 formation under their new head coach, having usually lined up in a 4-3-3 last season. This switch seems to have worked wonders, as they have scored the second highest number of goals (20) in the ISL this season at the time of writing,, behind only Mumbai City FC, with an expected goal (xG) total of 22.3, which is the third highest in the league. 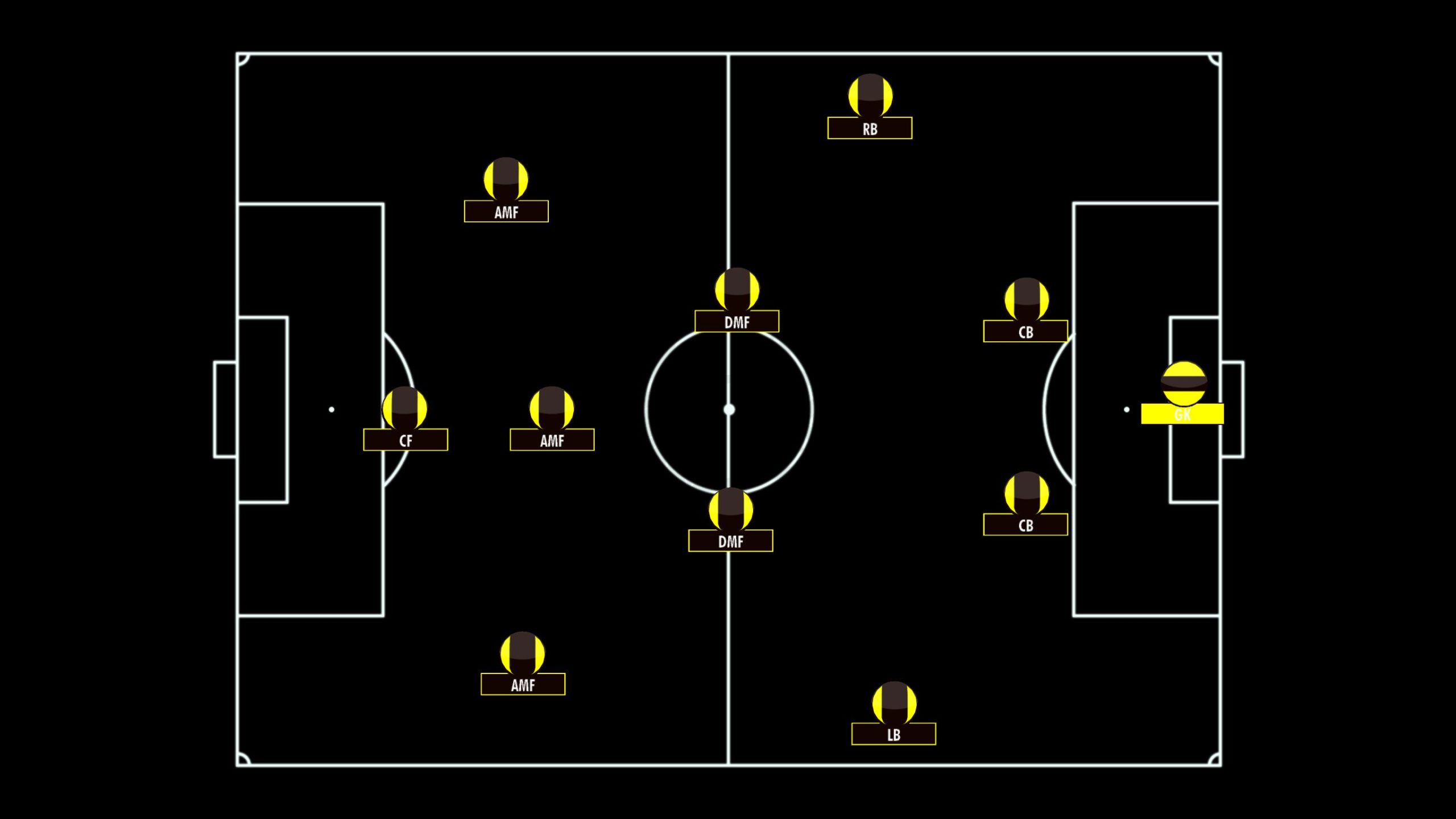 Although the line-up sheet suggests they play in a 4-2-3-1 formation, they keep shifting their formation during different phases of the game. During the build-up phase, they form a 3-1-5-1 formation, while moving to a 4-4-2 while defending. We will  break these changes down in this piece, and try to analyse how this way of playing has influenced the team’s performance.

Márquez’s defensive tactics are something to admire as they keep changing during different parts of the game. When the ball is in Hyderabad’s attacking third, the team looks to press high and immediately to recover the ball as soon as possible. 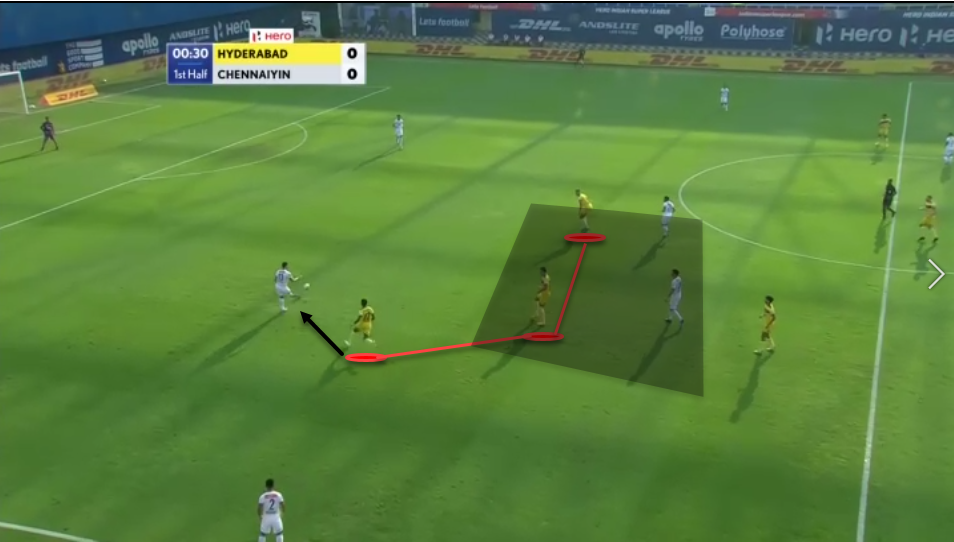 As said earlier, they switch to a 4-4-2 while defending, to make the centre compact and also have the flanks covered. While the two players up front cover passing lanes in the centre, the wingers press the player in possession, depending on which side the ball is, with the ball-far winger tucking infield.

As a result, opponents are forced to go long, which allows the Hyderabad defenders to win the ball back and then begin to build-up from the back. Hyderabad, as a team, have a success rate of 51% for aerial duels, the third-highest in the league, which shows their ability to win those duels. Their pressing efficiency is at 51% at the time of writing, with a PPDA of 4.00 signifying that they look to press extremely hard and in an intense manner. 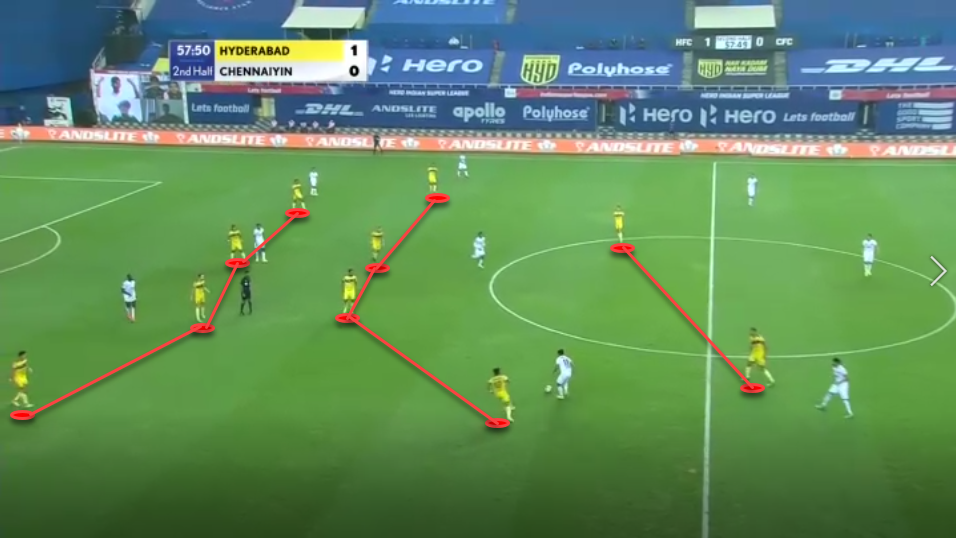 However, if opponents are able to escape the high press and enter the middle third, Hyderabad drop off and try to form a compact block to make it difficult to play through them. We can see in the image that the team stays compact in a 4-4-2 formation, where the ball-near winger is intelligently forcing the opposition infield, from where it will be more difficult to progress the ball into dangerous areas.

One of the most important aspects of their defensive structure is their ability to quickly fall back during transitions. While watching Hyderabad, we can see how the player closest to the opposition player on the ball will try to hold and delay the pass, thereby allowing his team time to get back in shape. Hyderabad are also not shy in making tactical fouls to break up the flow of opposition transitions and therefore give themselves time to recover

Hyderabad are one of the teams which prefers to build up from the back. During the build-up phase, either of the defensive midfielders drops in between the centre-backs to gain control of the game. As a result, the full-backs are now free to push high and occupy the flanks in higher positions, with the centre-backs moving wide, in a back three with one of the central midfielders having dropped in. 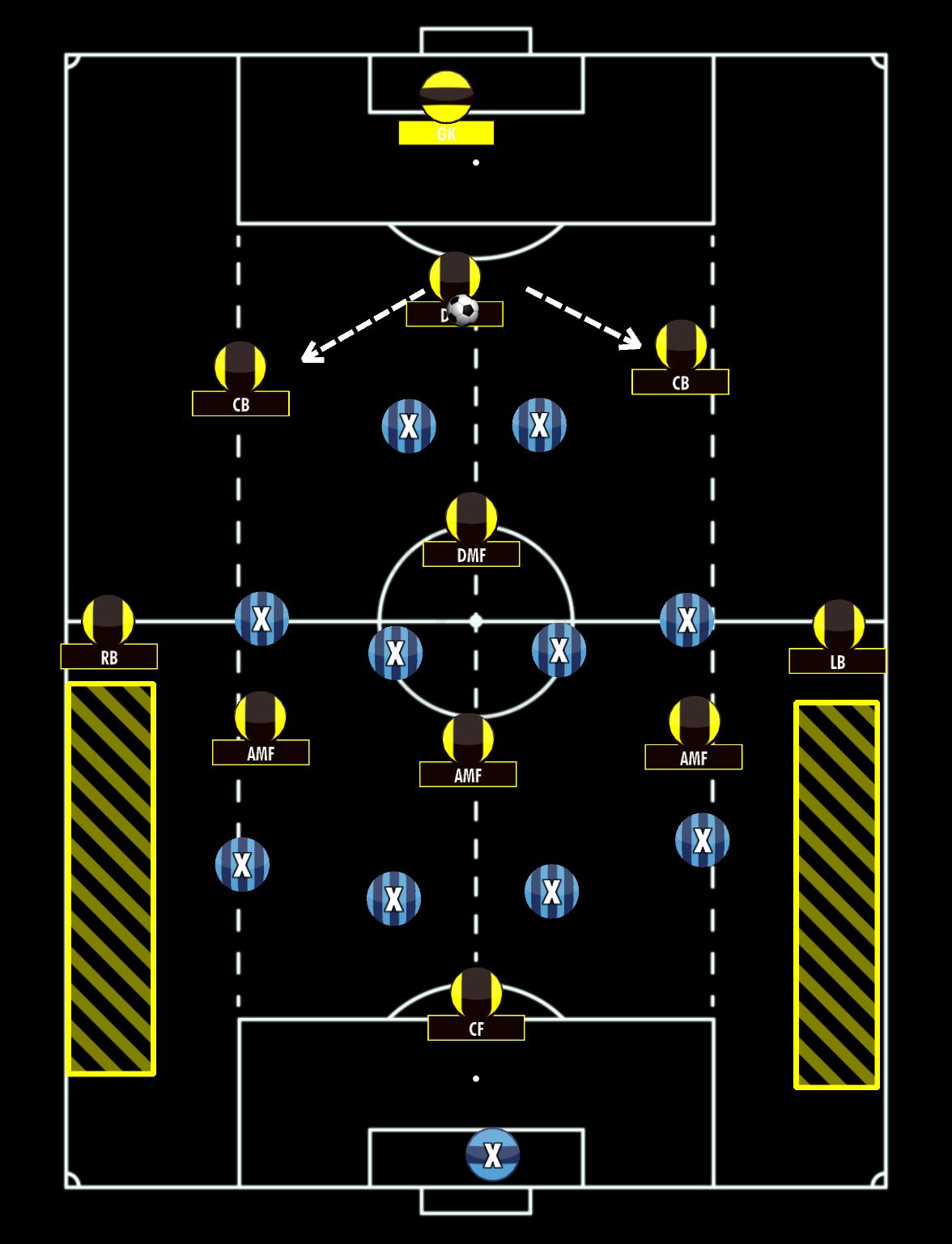 This image shows Hyderabad’s positioning when in the build-up phase. As stated earlier, the defensive midfielder drops in between the two centre-backs while the full-backs push up. If the player on the ball manages to find the pivot in the centre, then the ball is played through the centre and if not, he has passing options out wide to exploit the space. 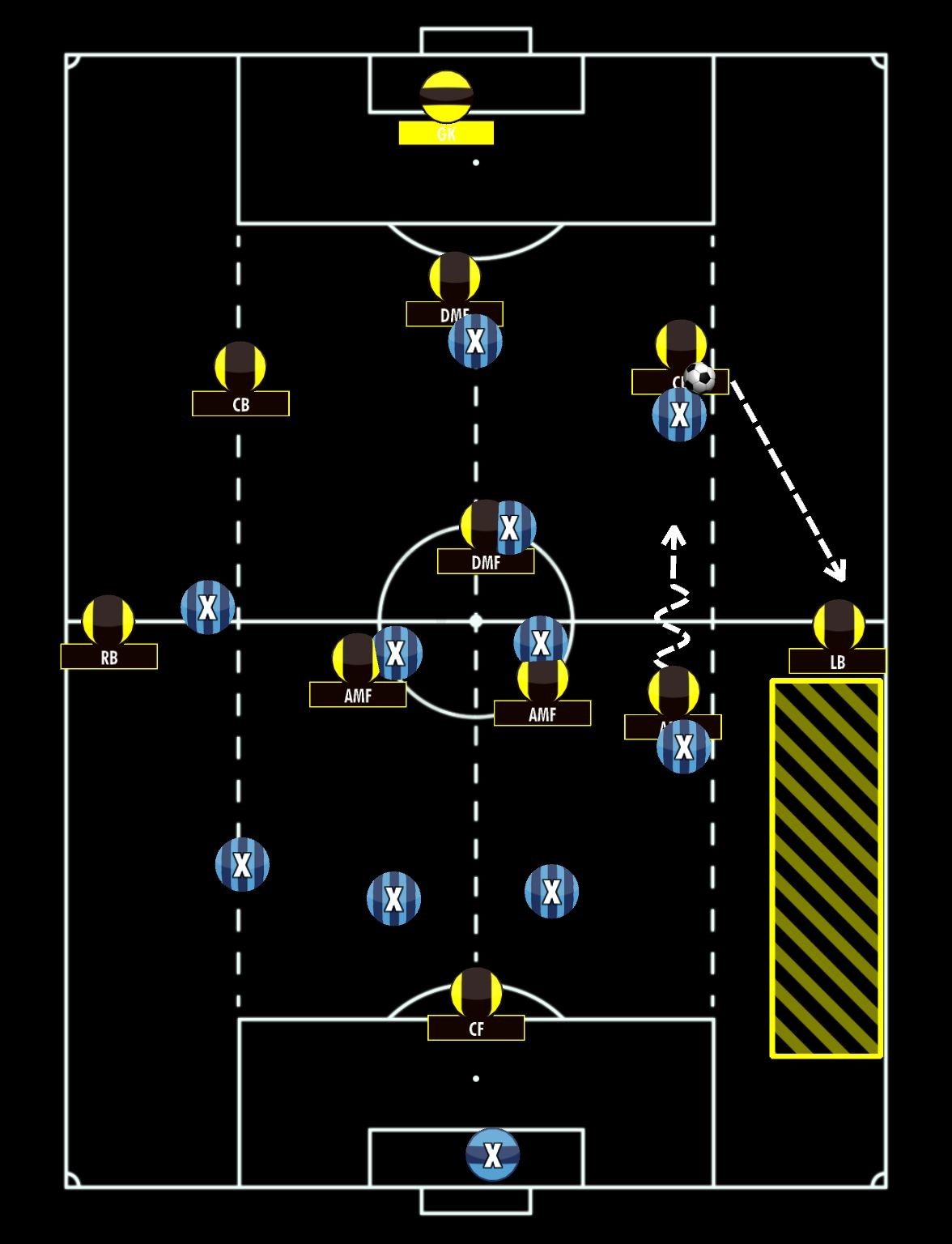 When opponents are pressing well, they look to switch the ball between their defensive line, with excellent movement from those ahead of them to escape the opponent’s marking schemes.

In the image, we can see how a midfielder drops back, dragging an opponent with him, which, as a result, creates space on the flanks for the full-backs to exploit.

They become even more dangerous when they are allowed to progress centrally. Their midfielders and attackers have a very good positional sense which allows them to pick up positions in space. 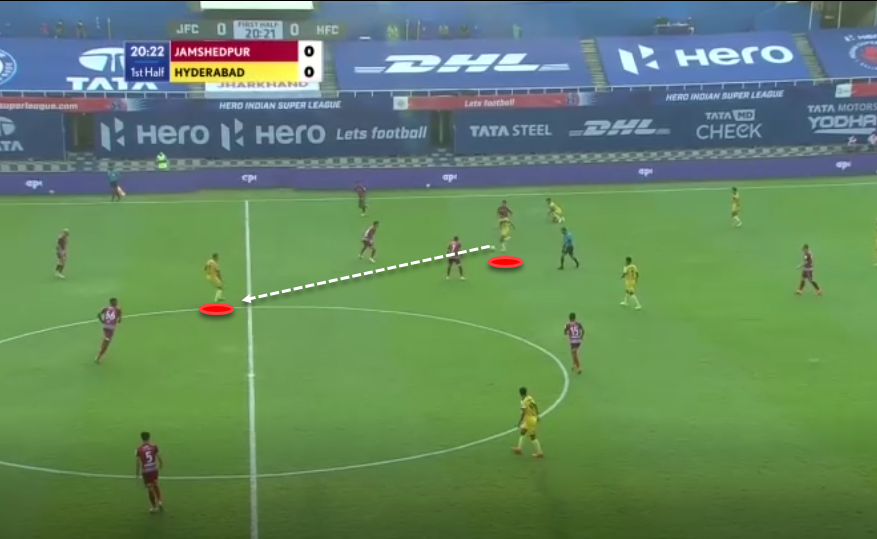 Upon receiving the ball in the middle, they are quick to attack. Their efficiency of progression through the centre stands at 16% which is the highest in the league along with FC Goa. However, although they look for central progression whenever possible, their penetration in the final third usually takes place from wider areas, which we will see next.

Hyderabad have created 77 chances in total this season and have a good conversion rate of 26%, thanks to their strikers who have been clinical in front of goal. A lot of credit for this should go to the Indian players in the side who have been putting up strong performances.

We did see that Márquez’s men are more efficient when progressing through the centre, but their favourite trait is undoubtedly to progress down the flanks 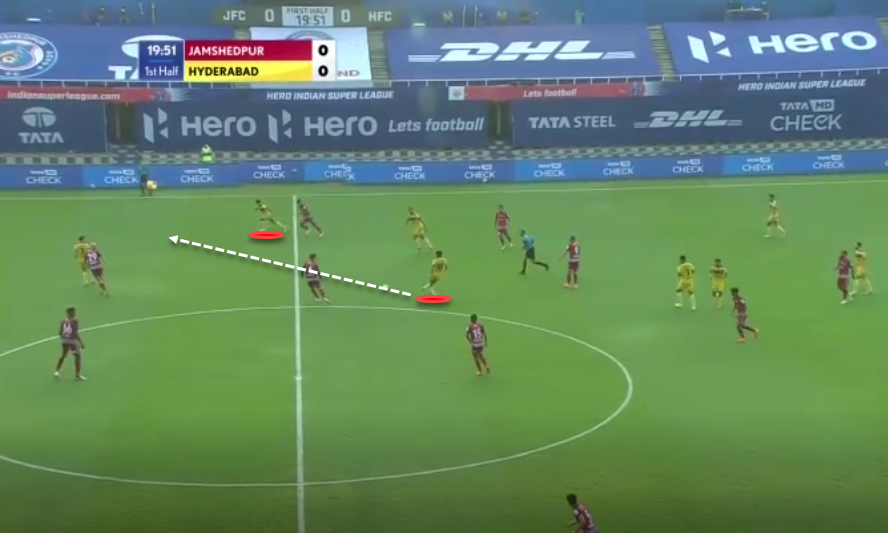 When they build-up from the back, we will often see the attacking midfielders drop deep, dragging a player with them and thus creating space for the full-backs on the flanks. However, teams that are good defensively make it difficult for Hyderabad to progress in this manner, why their efficiency when progressing through the centre is high when compared to the flanks (right flank -10% and left flank – 8%).

Against teams who do not give up space on the flanks, Hyderabad look to force those spaces by constantly overloading the central areas. 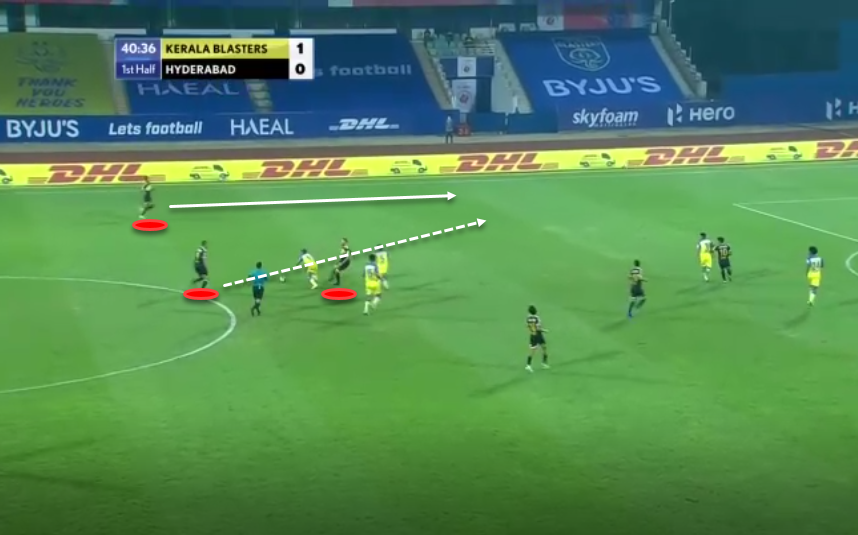 As a result, enough space is created for the full-backs to penetrate and they are supported by the midfield as well.

One of the most noteworthy areas of this is how they organise themselves when attacking down the flanks. As any good team should be doing, they provide the player on the ball with multiple passing options. 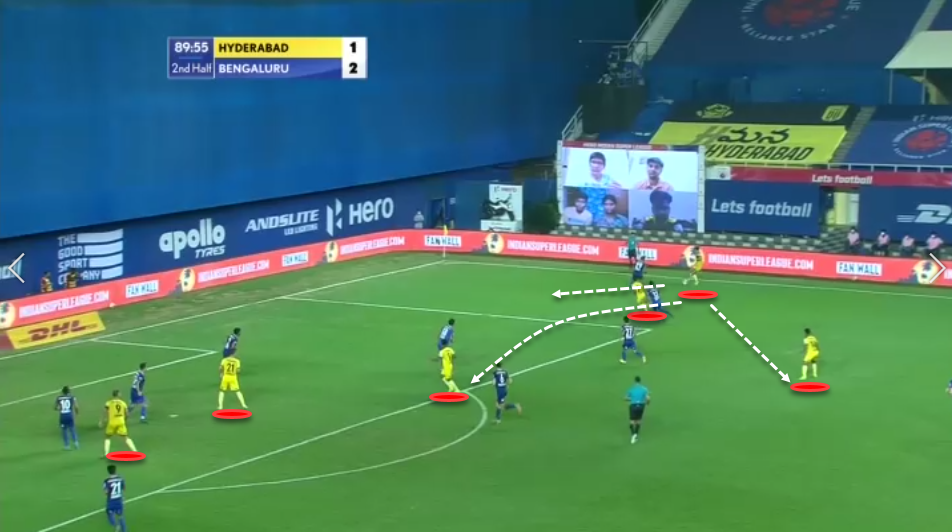 We can see that Hyderabad have multiple players giving the wide man options, which not only helps him, but also puts immense pressure on defenders as it is difficult to predict who the player would be passing to. Secondly, this organisation also helps them to win second balls and make recoveries quickly in the event of a turnover in possession.

The work rate of the entire team has been brilliant this season. While other teams are complaining about decisions, signings and other matters, Hyderabad have set an example to the rest by making sure their game does all the talking!

Head coach Manuel Márquez Roca has clearly been a standout coach this season for his tactics, decision-making and the results that Hyderabad have been getting. With them currently in the top four, it will be interesting to see how far the team goes in the current campaign and what they can achieve. They have already given fans a lot of memories to cherish, and no matter where the season ends up, Márquez Roca has already made an indelible mark in Indian football.