Luka Ivanusec is a versatile midfielder who made a name for himself in the 1.HNL in recent years with the 2020/21 campaign being a breakthrough season, as he shone for both club and country on the European stage. The 22-year-old was part of the Croatia U-21 side for the U-21 European Championship, and then also made it to the senior squad for EURO 2020 as well. While he made his debut for Croatia back in 2017, when he also became the youngest goalscorer for the national side, this marked a significant step up in his career and has already led to his transfer value tripling, according to Transfermarkt.

This scout report will contain a tactical analysis of Ivanušec attributes and his playing style. Through the analysis, we will try to mention his strengths and weaknesses.

Luka Ivanušec is a 22-year-old attacking midfielder, and Transfermarkt values him at €13.5 million. Ivanušec is listed at 175 cm and he is predominantly right-footed. This season he played in multiple positions for Dinamo Zagreb and looked impressive no matter where he played. Ivanusec usually played as a winger on the left flank, although he was also used on the right as well as a central midfielder on occasion. When playing as a CM, he tends to drift to the left to combine with the winger and full-back to create overloads. 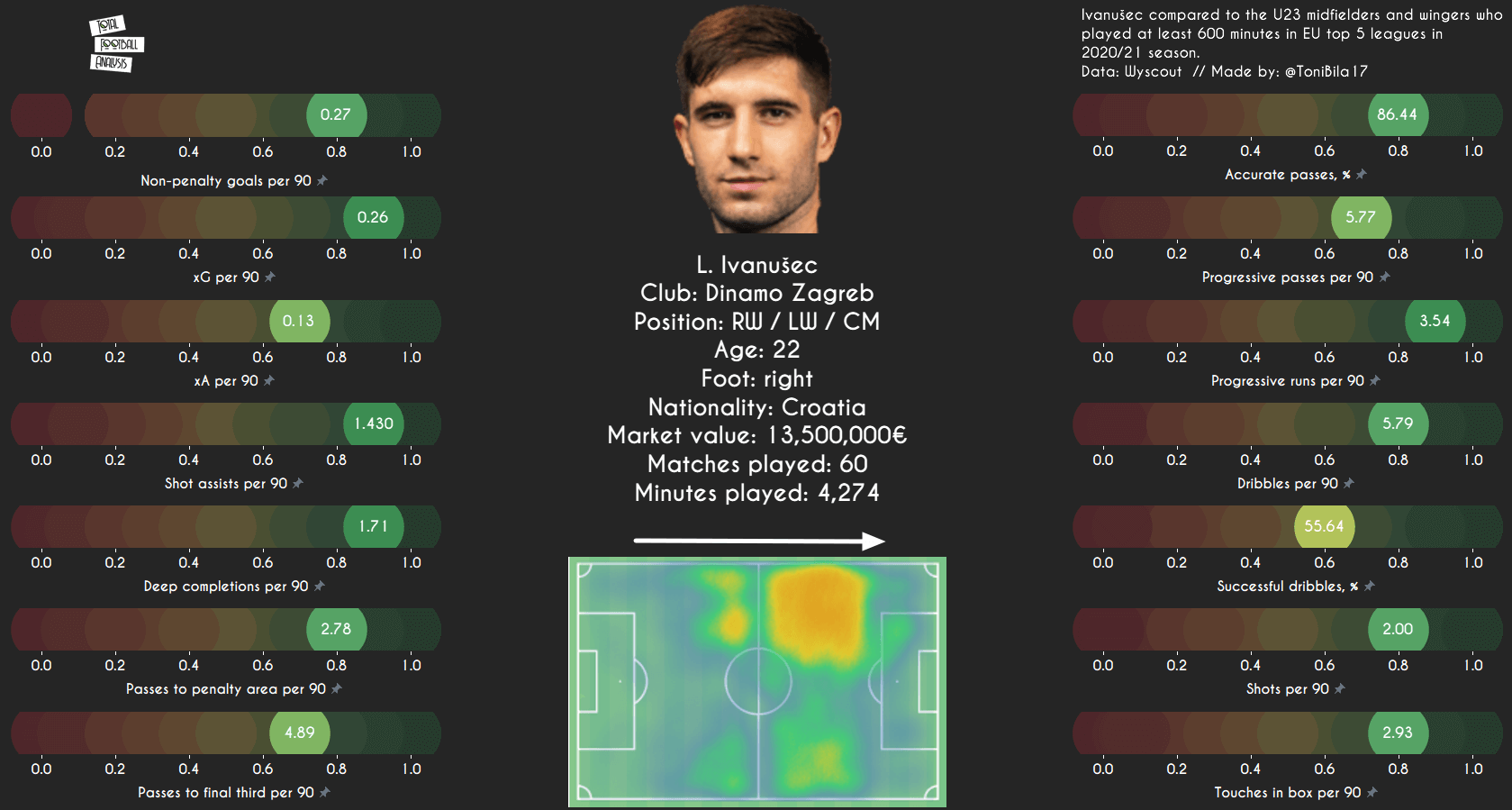 His statistical profile is a comparison with other U-23 wingers and midfielders from the top five European leagues who got at least 600 minutes on the pitch. This also includes any playing time in European competitions. While the 1.HNL is a lower-quality league than these competitions, this is still a decent starting point to understand his strengths, weaknesses and traits.

What this visual shows us based on data is that he is a player with good all-around ability, especially in the attacking phase. He averaged 2 shots per 90 and 2.93 touches in the box per 90 last season which led to him having a relatively high xG of 0.26 per 90. Ivanušec’s ability to create space to shoot in the penalty area is one of the biggest reasons for this. He is also excellent at ball progression through carrying the ball, having averaged 3.54 progressive runs per 90 and attempted 5.79 dribbles per 90 with a 55.64% success rate last season. Through all of the passing metrics in the visual, we can see that he can create for his teammates as well which rounds off his attacking skillset quite well.

After a quick overview of his profile and looking at his qualities from a data perspective, in the next sections we will have a detailed analysis of his playing style and his strengths.

Attacking phase – on and off the ball

In this section, we will see how Ivanušec looks when his team is in possession. 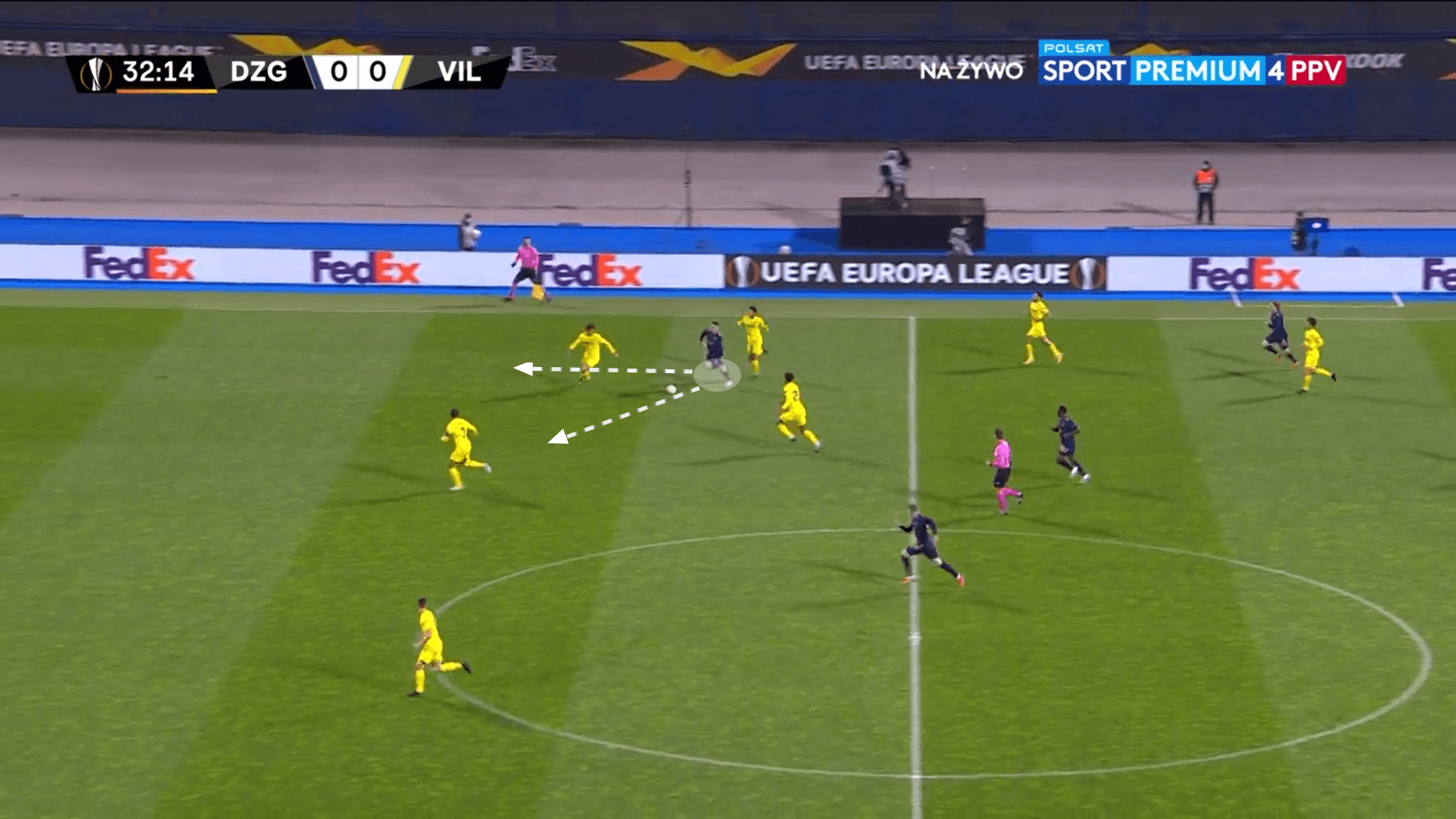 Ivanušec has a low centre of gravity, he is strong and shows good balance while running at full pace. In the previous frame, we can see a situation where Ivanušec made a run with the ball from the touchline towards the central area of the pitch. He was surrounded by multiple opposition players, but his tight ball control and agility helped him to keep the ball. Even though he is directed towards the central area he made a quick change of direction to get on his right foot. Given the fact he is a very good dribbler, it is hard to predict his next move when he is running at defenders with pace.

The next example is about Ivanušec’s spatial awareness and the ability to play one-twos. 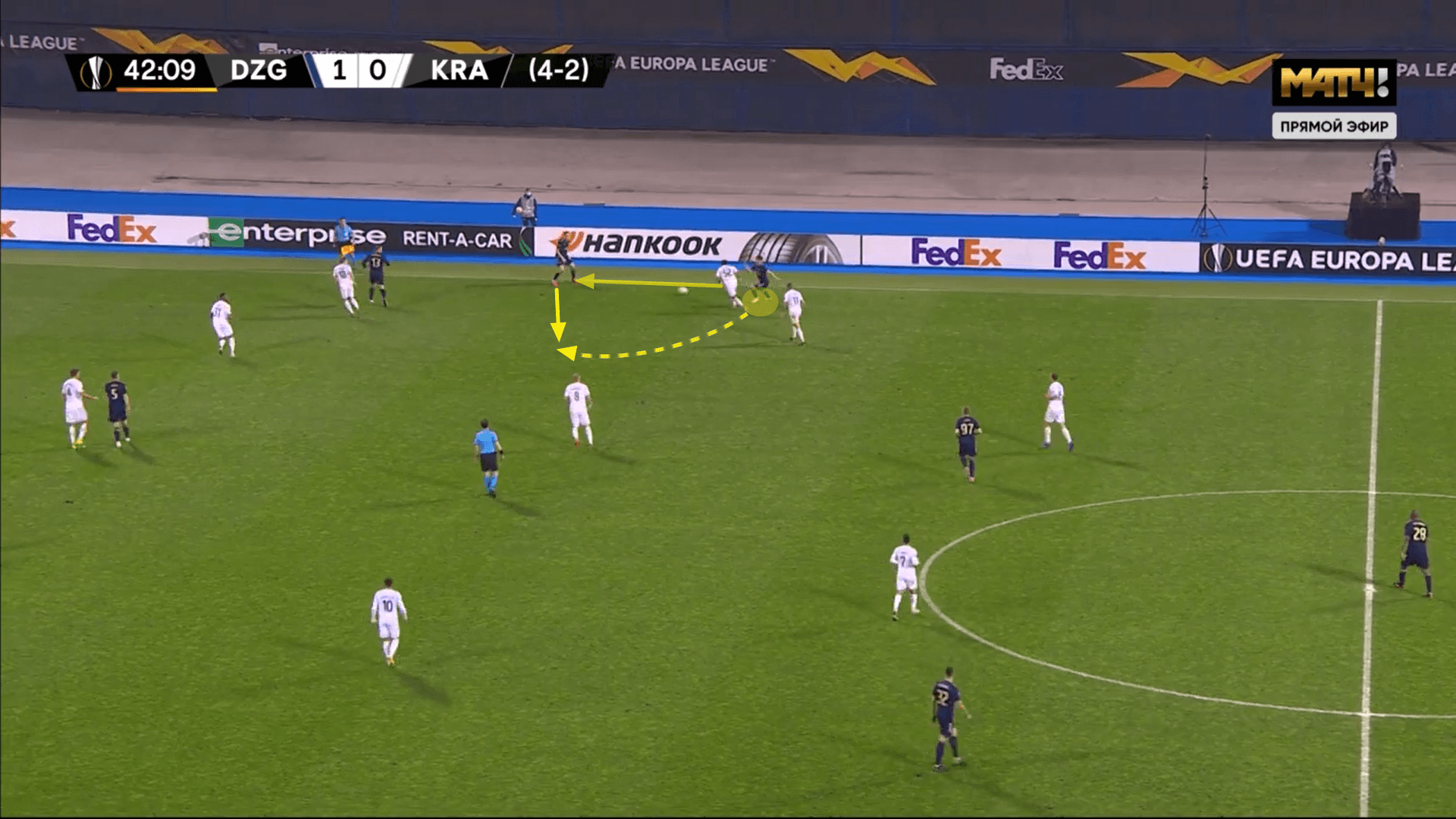 We can see how Ivanušec makes a pass down the line and moves around the opponent making himself available to receive the ball instantly and progress further. He likes to have the ball at his feet, but he has the ability to recognise situations where he should play with fewer touches and it helps him get closer to the goal without too much time on the ball. This situation perfectly shows that when he receives the ball back from his teammate he will go directly at the opponents’ defence. 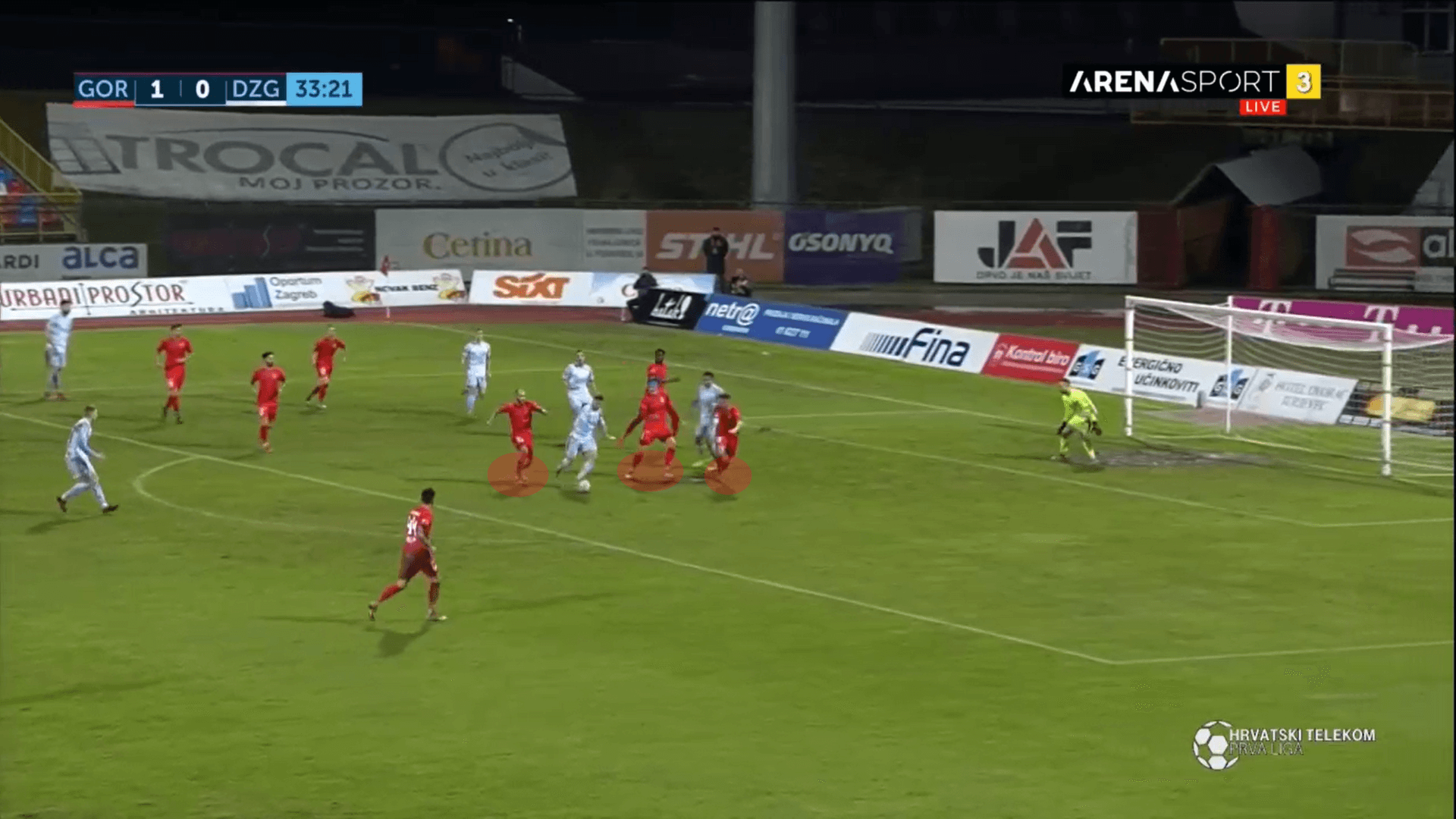 Ivanušec shows good finishing skills and can score goals from inside the penalty area. What is impressive about him is that he can control the ball and keep composure in tight areas to create space to shoot on goal. In this frame, he faces pressure from behind and has two defenders in front of him who are trying to block his shot. Ivanušec manages to move defenders enough to create space between them which enables him to score a goal. It is very hard to dispossess him in those situations because of his agility and ball control, and defenders going in aggressively could end with a penalty since he can beat them in tight 1v1 situations. 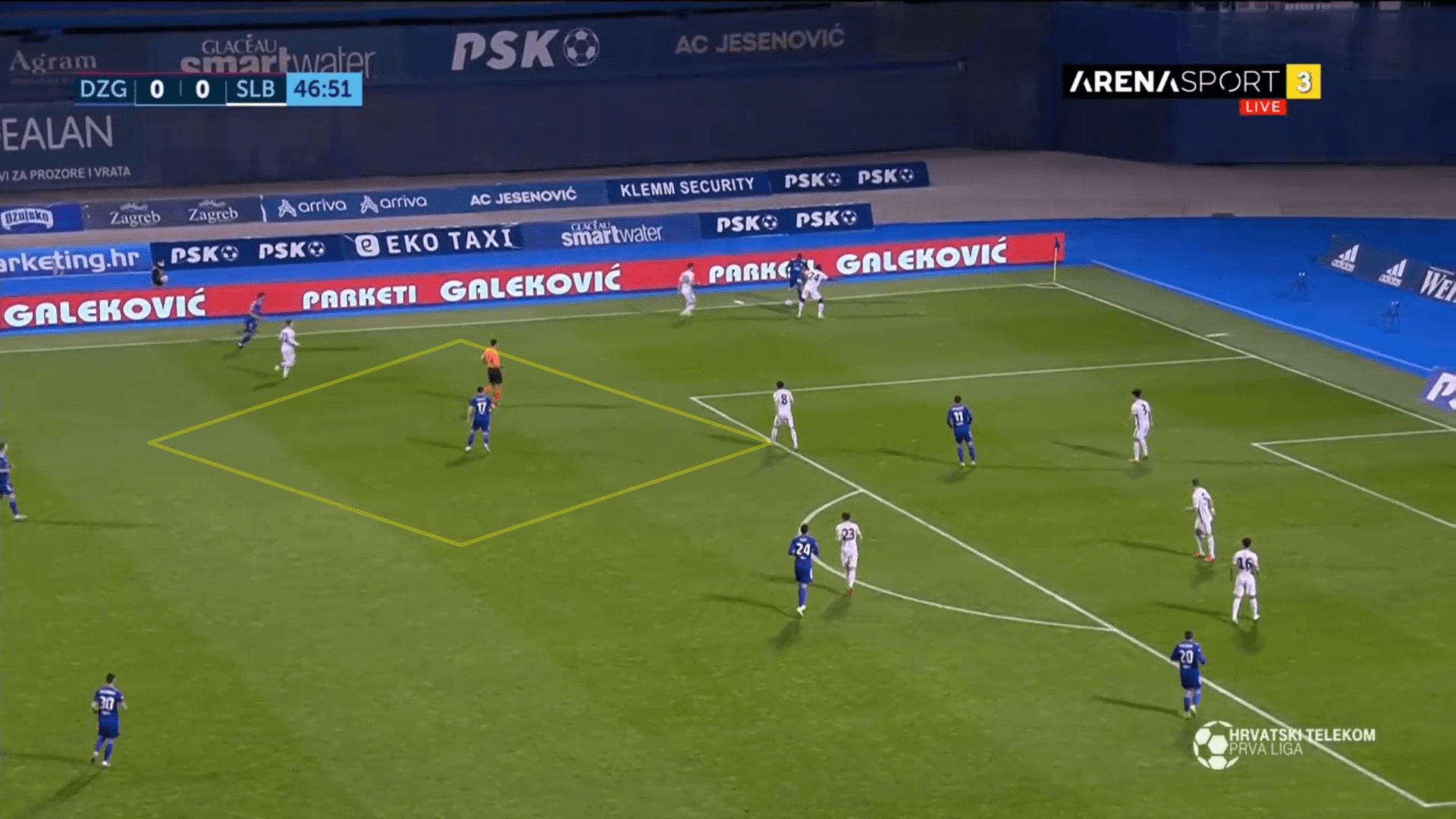 In this situation, we can see Ivanušec’s movement off the ball to receive possession in the left half-space. His smart off the ball movement to receive the ball in dangerous areas and turn quickly towards the goal is one of his biggest qualities. This is the area where he usually operates when playing as a central midfielder trying to make overloads on the left flank. We can see how he has a lot of space around him to receive the ball from the winger and turn towards the goal under no pressure. 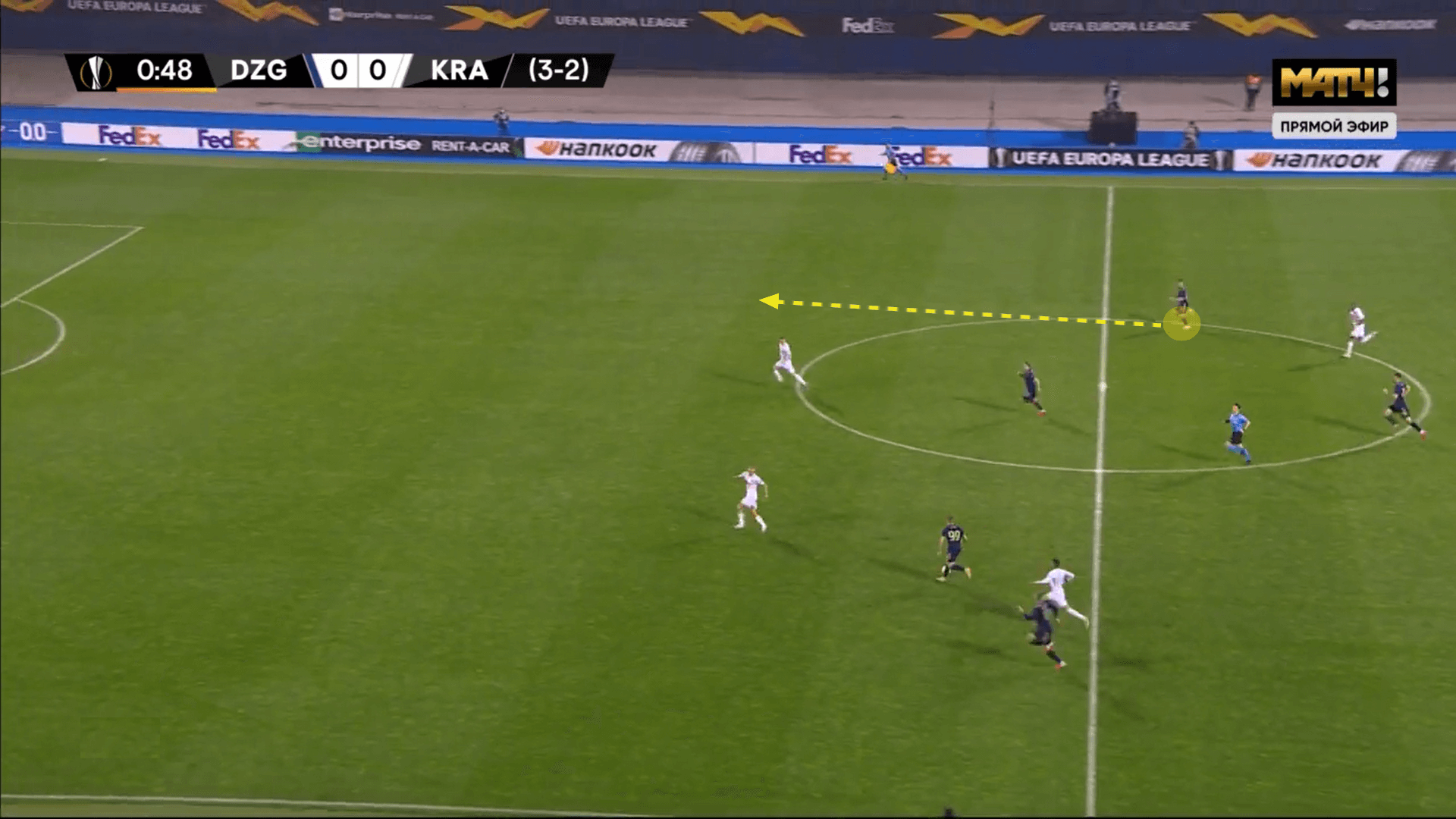 Dinamo started a counter-attack on the left side with Mislav Oršić progressing with the ball towards the goal. Ivanušec reacted quickly to join the attack with a forward run and created an overload in the final third. His run spread the two defenders and because of his run, Oršić had more time and space on the ball. In the end, Oršić made a decision to pass the ball towards Ivanušec. He often makes these kinds of forward runs which makes him very useful in attacking transitions. Playing for Lokomotiva Zagreb before joining Dinamo helped him a lot to develop in counter-attacking football since Lokomotiva were a very transition-based side.

In the next two images, we can see Ivanušec’s reactions in defensive transitions and his counter-pressing. 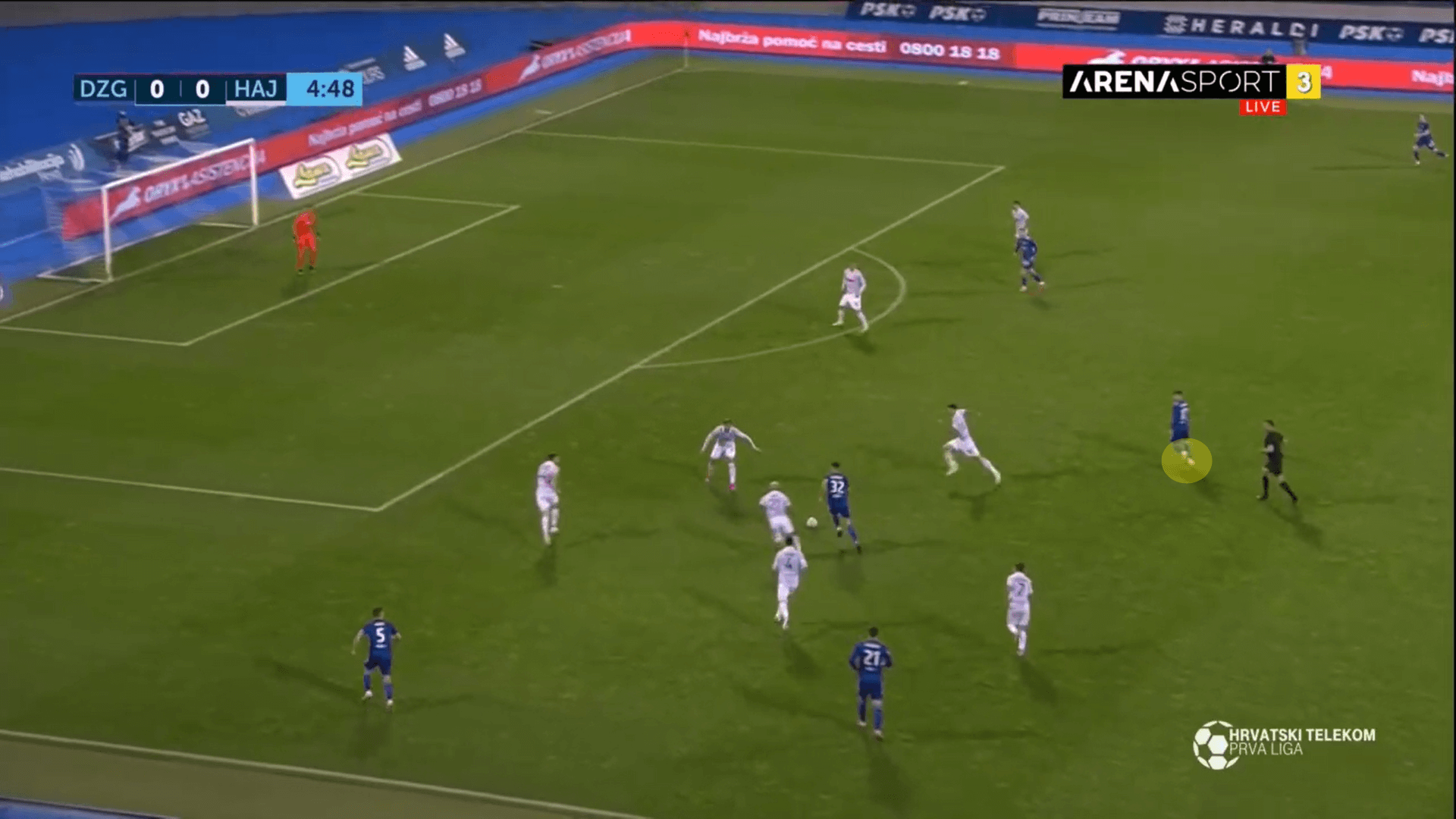 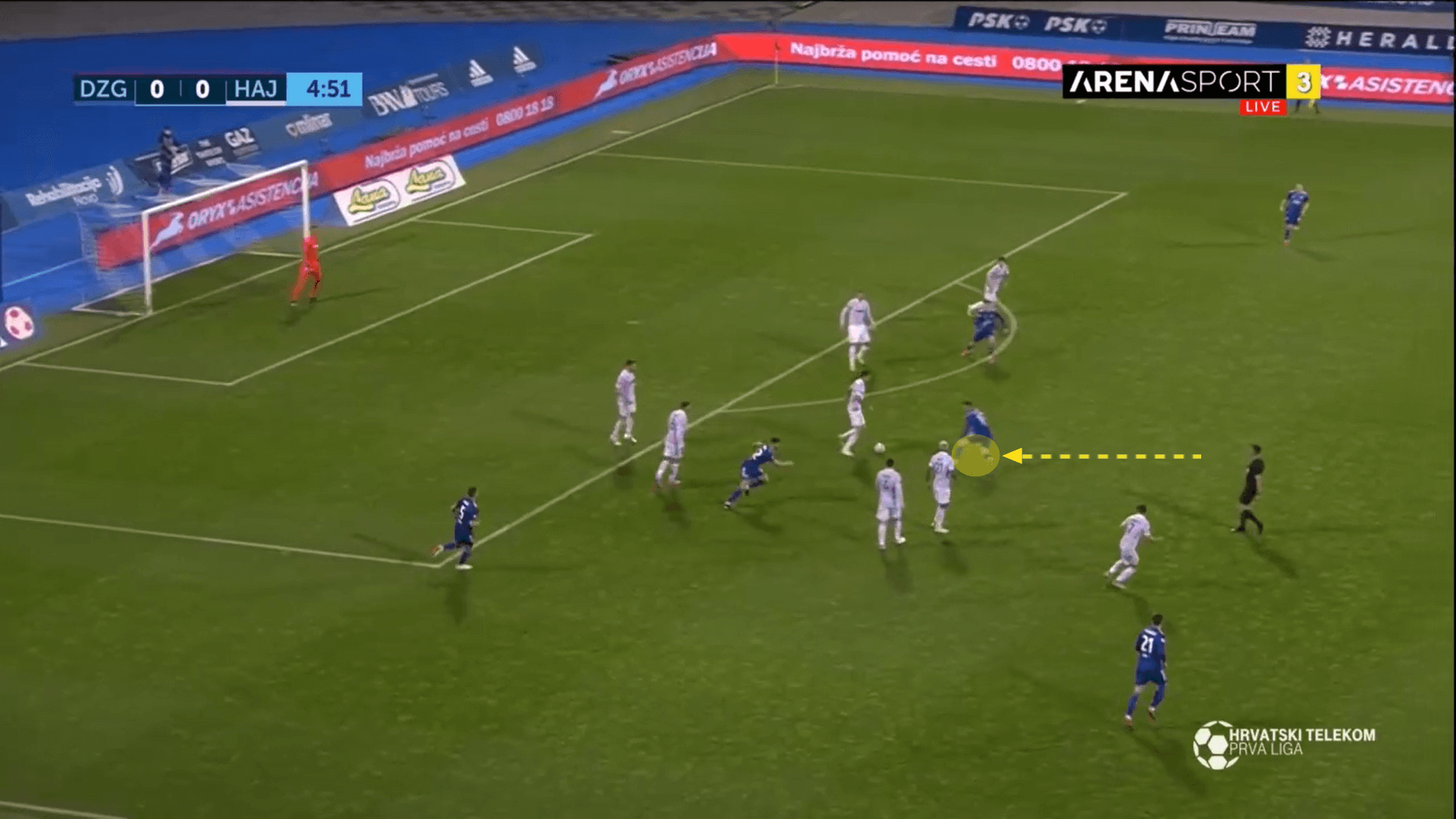 In the first frame, we can see that Ivanušec is anticipating the pass from his teammate, but it ends with an unsuccessful dribbling attempt. In the second frame, we can see how he instantly accelerates to press the opponent in order to prevent him from progressing forward quickly. His ability to react quickly to a change of possession is something that every coach desires from his players. Looking at his reading of the game and quick reactions it is easy to conclude that he would not have a problem adjusting to the tempo in the top European leagues.

It is very hard to find weaknesses in his game, but if we had to highlight areas to improve it is his aerial ability, along with his tendency to rush forward, which can leave the team a little vulnerable to counter-attacks at times. Of course, it is difficult for him to be competitive in the air with his small frame so we can label it as a weakness that will probably not be improved. What is meant when talking about his tendency to rush forward is that he tends to look for advanced and risky options and sometimes forces going forward when retaining possession with a safer pass would be better. His trait of progressing with the ball is his quality, but he should sometimes make a better judgement of when to go forward and when to pass laterally or backwards.

This analysis gave us information on Ivanušec’s abilities and how valuable an asset he could be for top clubs given his versatility to play multiple positions at a very high level. His performances in the Europa League matches against Villarreal and Tottenham Hotspur indicate that he can cope with EPL and LaLiga stars equally.  His agility and mobility help him to react quickly in transitions which indicate that he can play in better leagues where the tempo is quicker. This breakthrough season is a good indicator of his work rate and determination to develop and reach his potential, and it will be interesting to see if and when he manages to get a move to a bigger league. 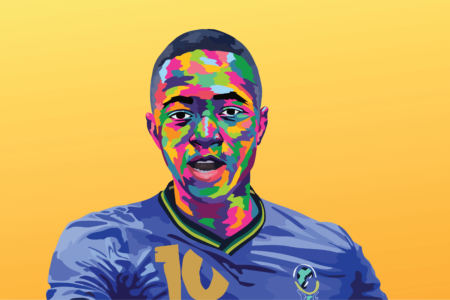 There are many ways for young players to get into the professional game. Going through a pro academy is the […]