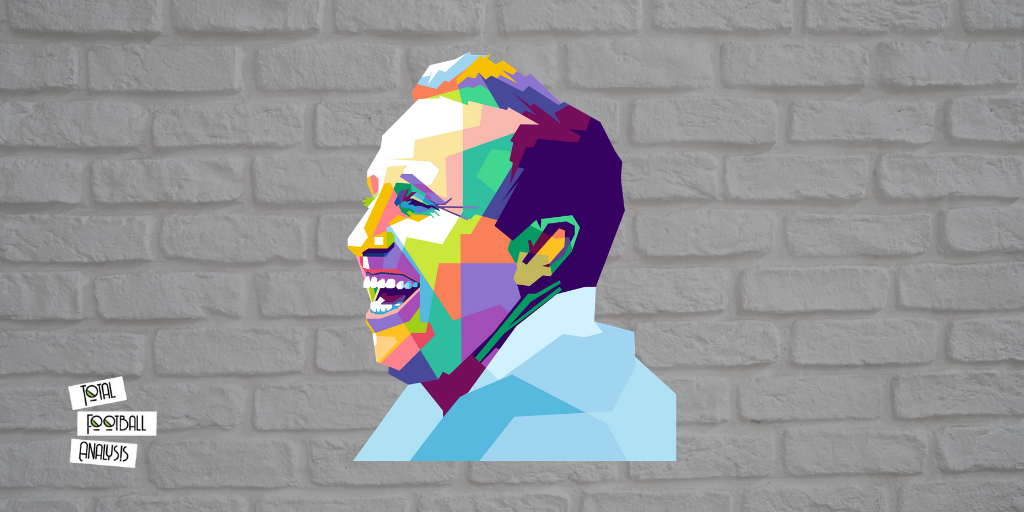 FC Zürich start the game with a kick-off. After a pass to one of their defenders, the ball is played long towards a forward running attacker while the rest of the team moves up the pitch as a compact unit. This scenario often happens when Zürich have a kick-off under their current manager Ludovic Magnin. And although this situation obviously only displays a fractional part of Zürich’s games, it offers a pretty good insight into what style of play Magnin prefers.

Magnin’s philosophy revolves around direct play, fast (counter-)attacks and domination within the opposition half of the pitch. In the following tactical analysis, we are going to take a more detailed look at the tactical tweaks of Ludovic Magnin at FC Zürich.

The double pivot in their 4-2-3-1 or 4-4-2 gives his side extra protection and strengthens the rest defence. As the two defensive midfielders are usually positioned very centrally, together with the central defenders there is enough defensive cover. That allows the full-backs to move up the line and support the attack. Zürich’s typical attacking shape can be seen in the image below. 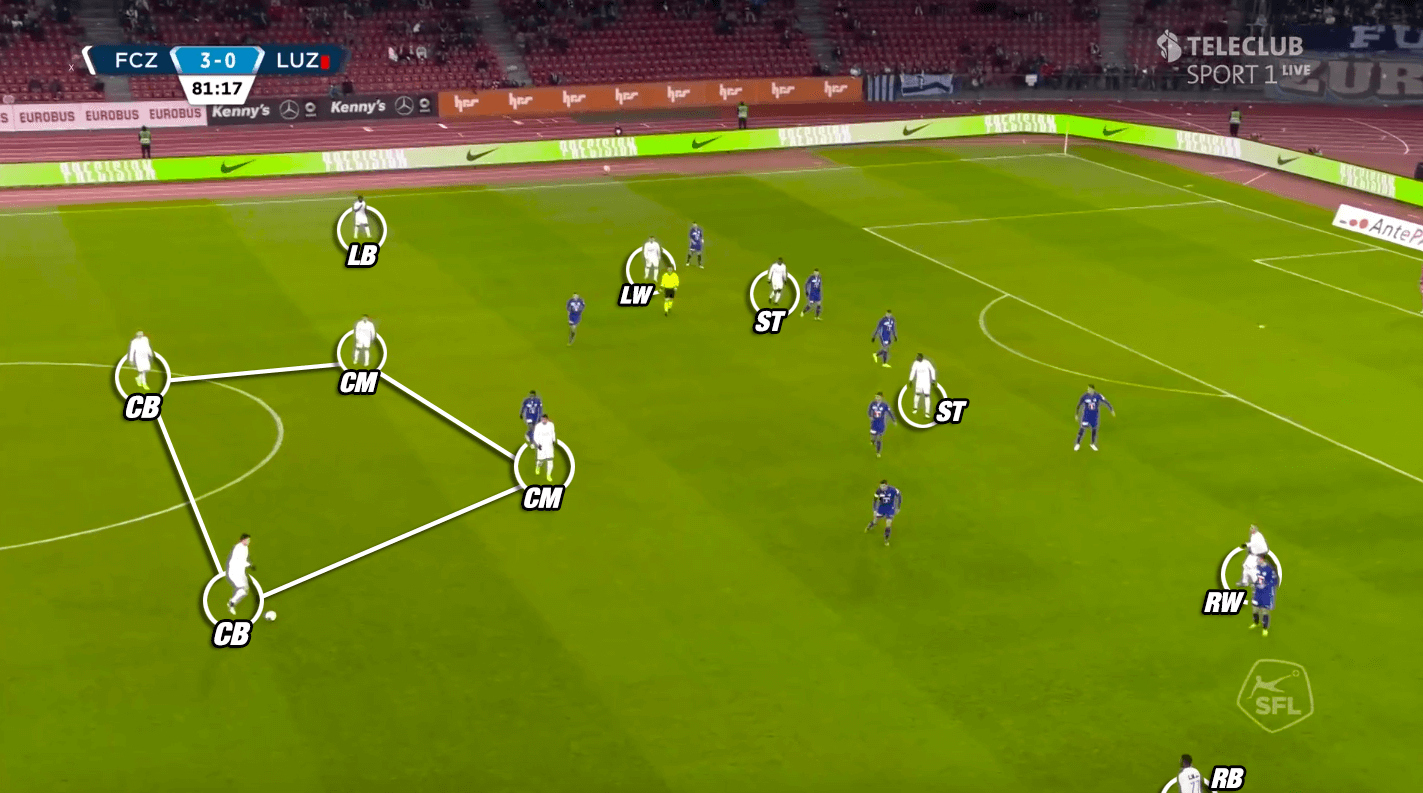 Their wingers will often tuck inside and use a narrow setup to attack the half-spaces. Note the narrow positioning of their attacking trio in the average position graphic below. 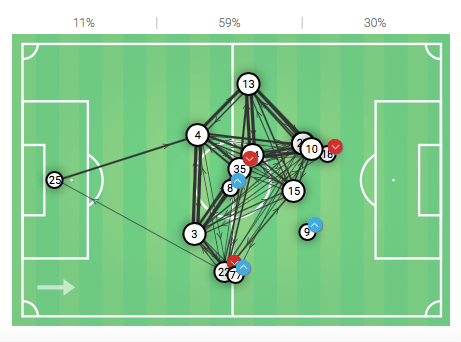 In general, Magnin wants his team to dominate ball and opponent within the opposition half. As a consequence, most of the action takes place in the middle third, or the attacking third whereas the defensive third is rarely used as an area of action for Magnin’s side.

Watching the matches of FC Zürich under his reigns, it seems that Ludovic Magnin favours a high tempo game with a lot of verticality. His side play 14.4 passes per minute of possession which is the highest value in the Swiss Super League. This underlines that Magnin wants quick actions from his players. They are supposed to use only few touches to play to the next teammate and therewith circulate the ball as quickly as possible. In contrast to that, their attacking department is also allowed to use 1v1 situations always with the purpose to get towards the opposition goal as fast and efficient as possible. With 536 1v1’s and dribblings so far this season, Zürich rank fourth in the Super League.

Magnin’s team like to control the game and therefore play a relatively low number of long balls. Long balls are only utilised to quickly progress up the pitch or to switch sides and therewith change the angle of attack. 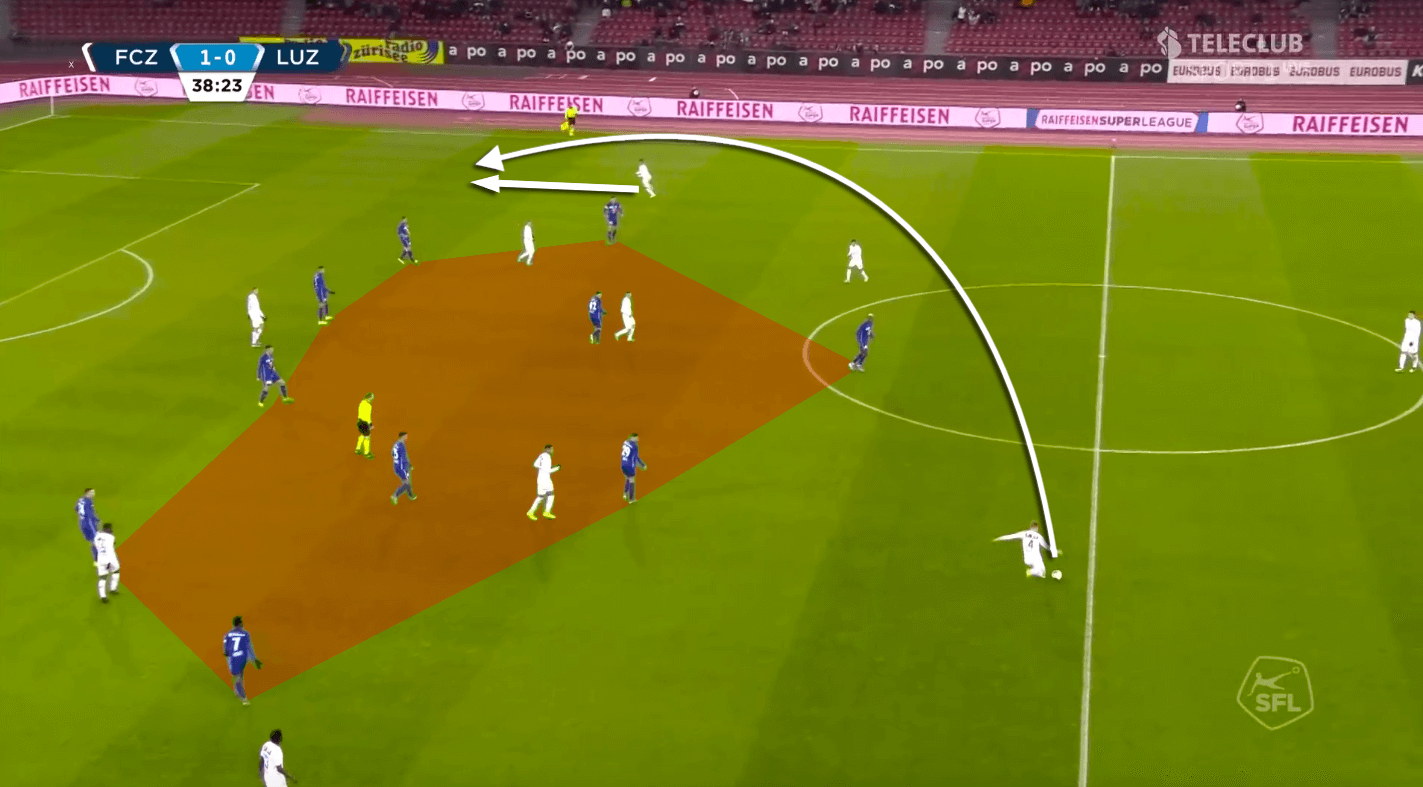 That way, Zürich attempt to penetrate compact defensive blocks as in the situation above. With the help of the offensive contribution of the ball far full-back, they switch sides.

When Magnin’s side play vertical long balls, there is mostly a clear purpose than just to hit the ball out of their own defensive third. Often there is an attacker offering an option to exploit the space behind the opposition defence with a deep run. Alternatively, one of the strikers offers the opportunity to receive and control the ball to do a lay-off ball back into midfield. This strategy enables Zürich to skip a man-oriented pressing approach in midfield from the opposition. This is possible due to the fact that man-oriented pressing attempts often create space behind the midfield as there is no covering midfielder in most of the cases. With their midfielders quickly following the ball, they are also capable of winning second balls if opposition defenders can clear the first ball.

If Zürich are forced to build-up calmly though, they try to create overloads on either flank in order to breakthrough. 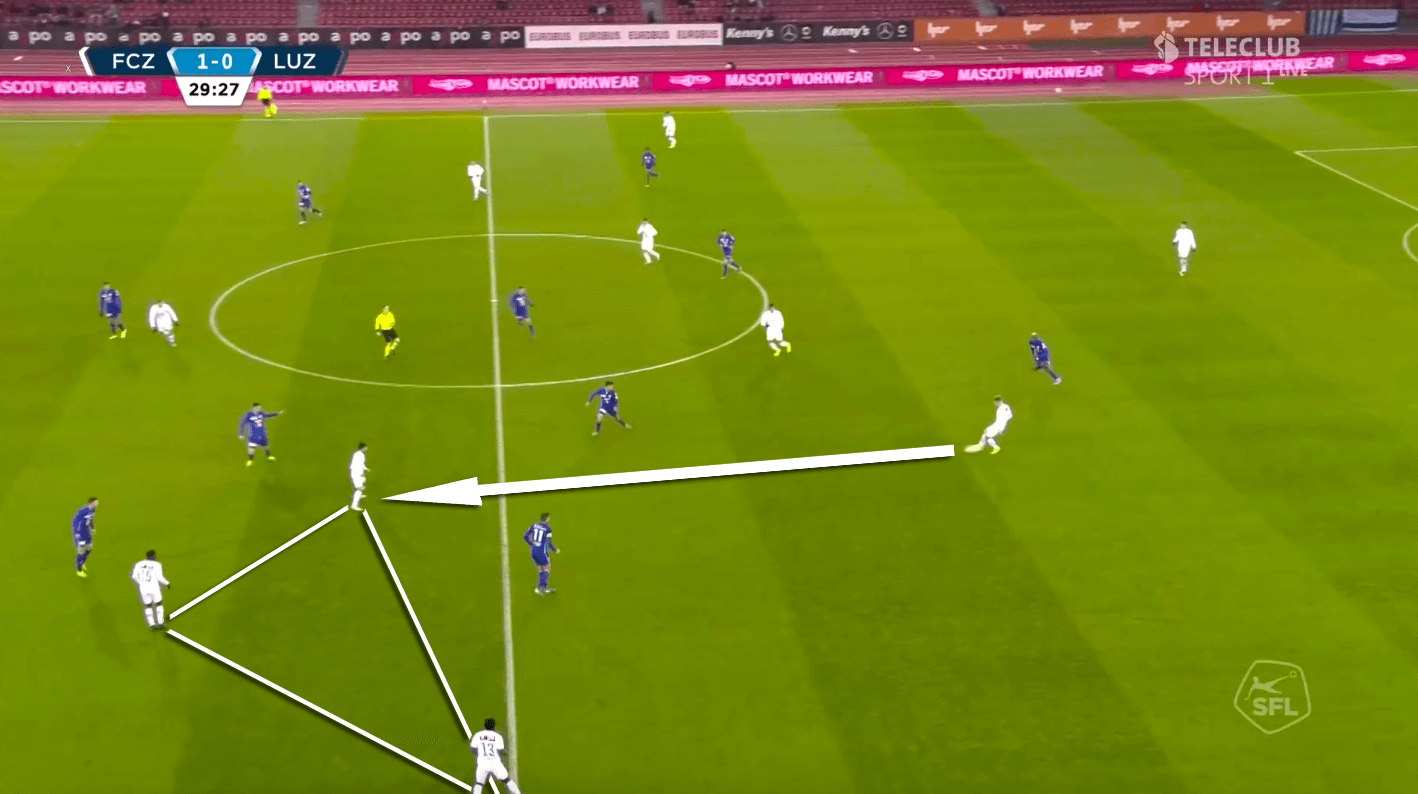 By creating a triangular shape on the left side of the pitch, Zürich enable their centre-back to play into the half-space. From there, full-back, winger and advanced midfielder use one-twos or third man combinations.

In wide areas, their full-backs support the attack. Meanwhile, the wingers often tuck inside. The main goal of many teams using high full-backs is to get them into crossing positions. For Magnin’s team, however, this is only a secondary goal. This can be proven by the fact that Zürich only cross 14.45 times per 90 minutes on average which is the third-lowest value of the league. Instead, they prefer their wingers to receive the ball in the “Assist Zone”. These are the right and left areas of the opposition box (marked red in the image below). 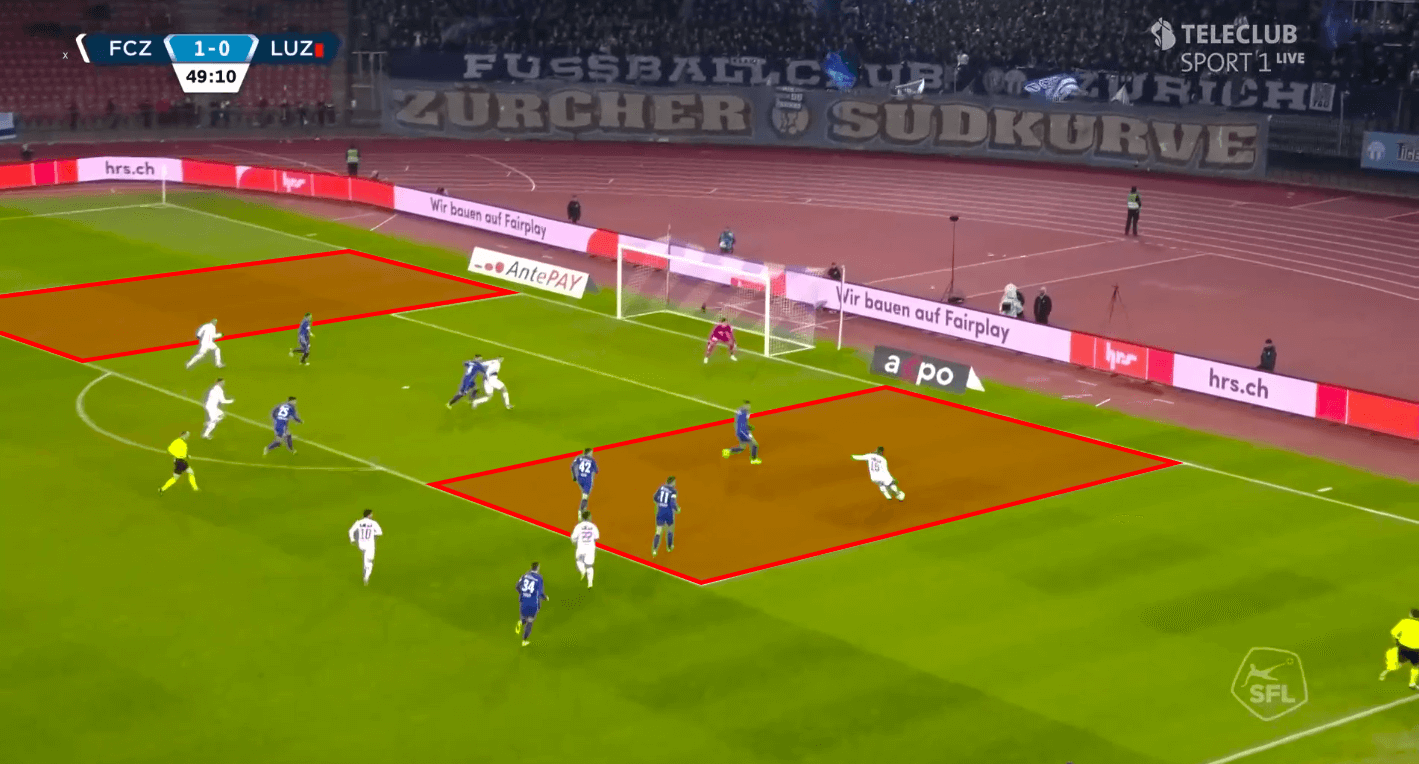 Often their goals and shots on target are assisted from these zones as in the situation above. From the “Assist Zone”, it is more likely to be able to play a ground ball instead of sending in a high cross. This increases the probability of scoring the goal as it allows for more control. Moreover, due to the shorter distance of the passes towards the attackers, it is more difficult for the opposition to defend these balls.

When counter-attacking, Zürich only provide as much width as needed. Often they will play to their widest option to stretch the opposition defence. 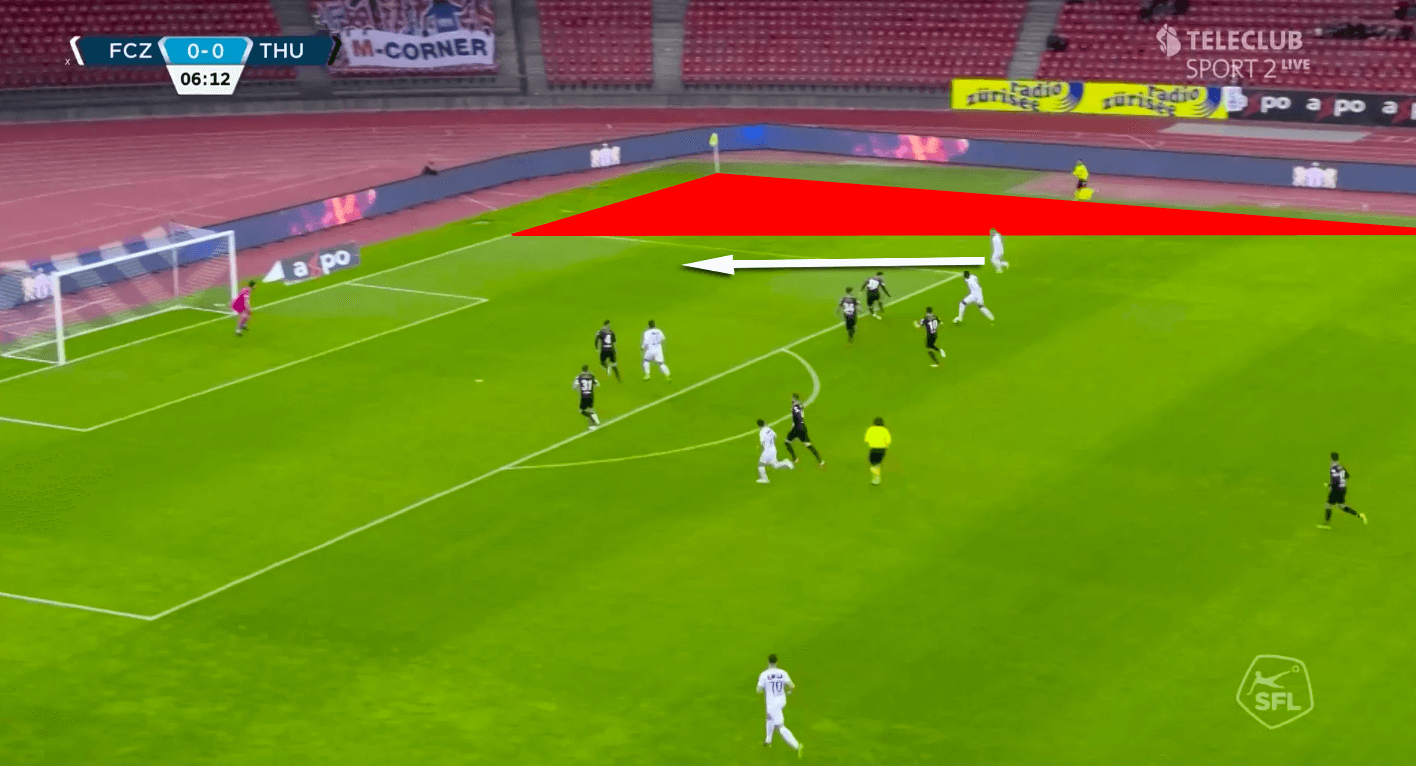 Depicting the pressing style of Magnin’s side, it becomes clear that Magnin aims at regaining the ball in midfield to quickly counter-attack and take advantage of the opposition disorganisation.

The higher up the pitch, his side is supposed to pressure the opposition, the more man-oriented becomes their press. 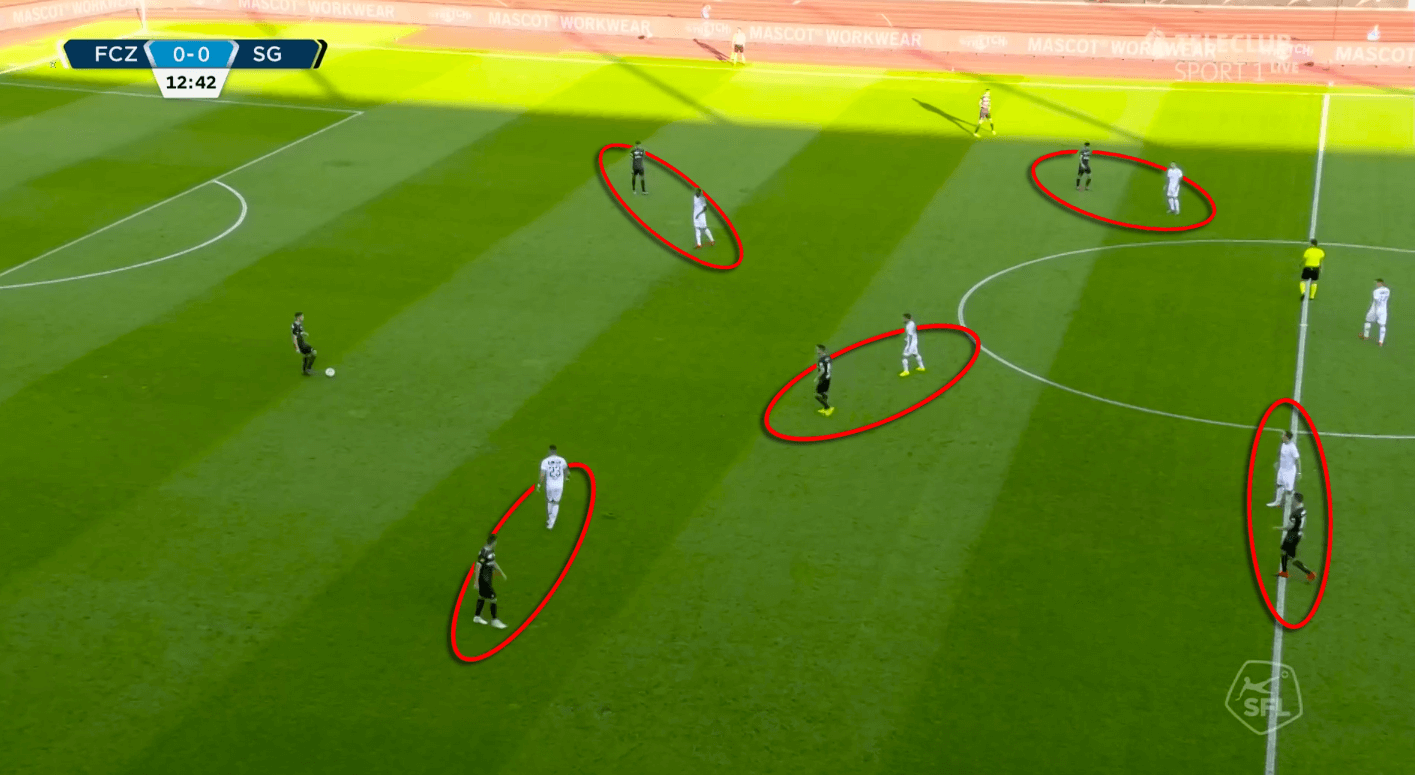 While the strikers and midfielders often press man-to-man, their back four remains relatively narrow in order to defend central spaces and avoid offering any gaps for through balls. Especially when taking a closer look at the back four, verticality becomes a key factor again. The backline is supposed to ensure a high vertical compactness of the defensive block by staying as close to the midfield line as possible, while still being able to defend any balls played in behind. Therefore, the short horizontal distances between the defenders are advantageous to cover each other.

Magnin’s side like to guide the opposition midfielders into uncomfortable situations which they use as pressing triggers. One common theme, for instance, is their principle to press opposition players receiving the ball with a closed body shape (turned backwards to Zürich’s goal). The lack of pre-orientation is being utilised by Magnin’s team in these scenarios. Their players then prevent the opposition from turning, press from the blind side and attempt to win the ball as displayed below. 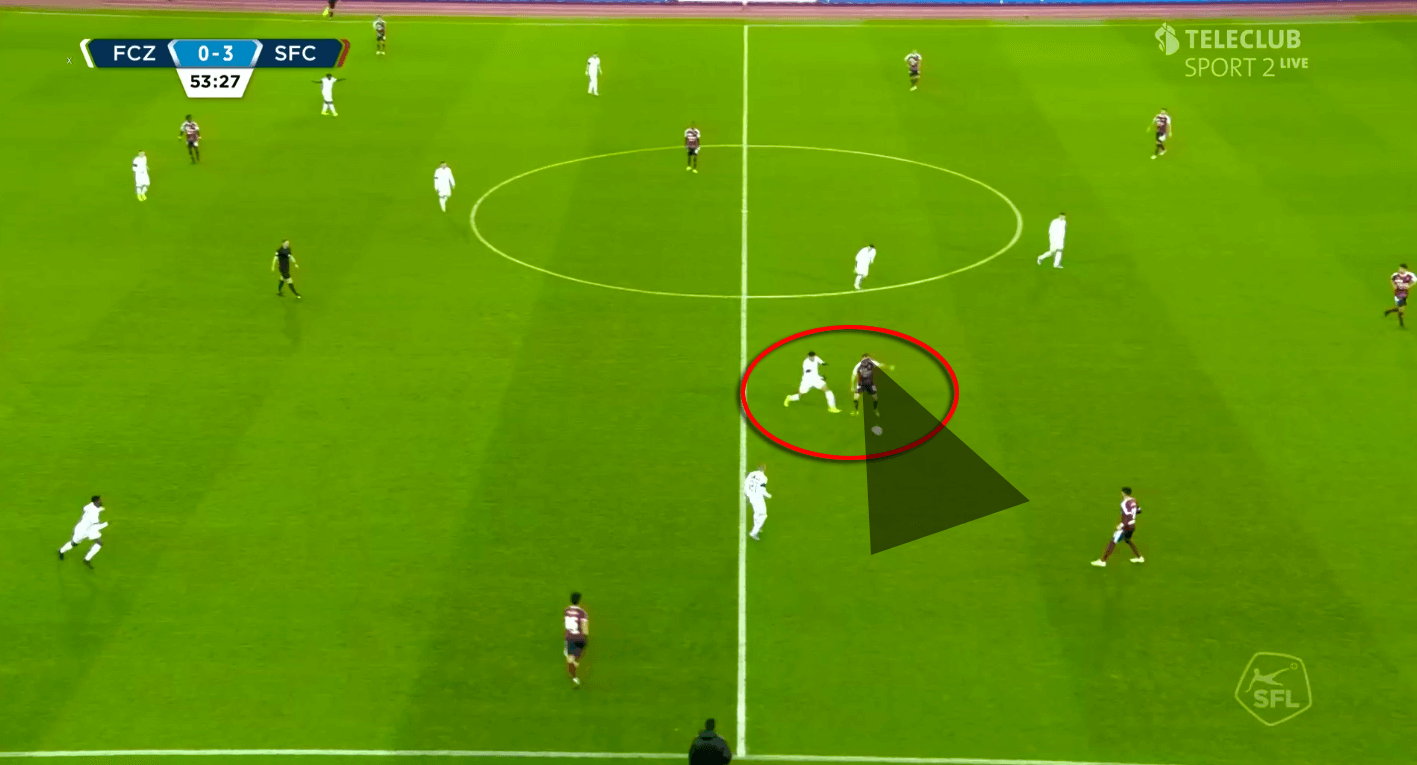 Since not only the central players use this kind of pressing but also the full-backs, the ball near full-back often moves high up the line to defend the opposition winger. Situationally, this leads to a narrow back three in the centre as the ball far full-back shifts inside. 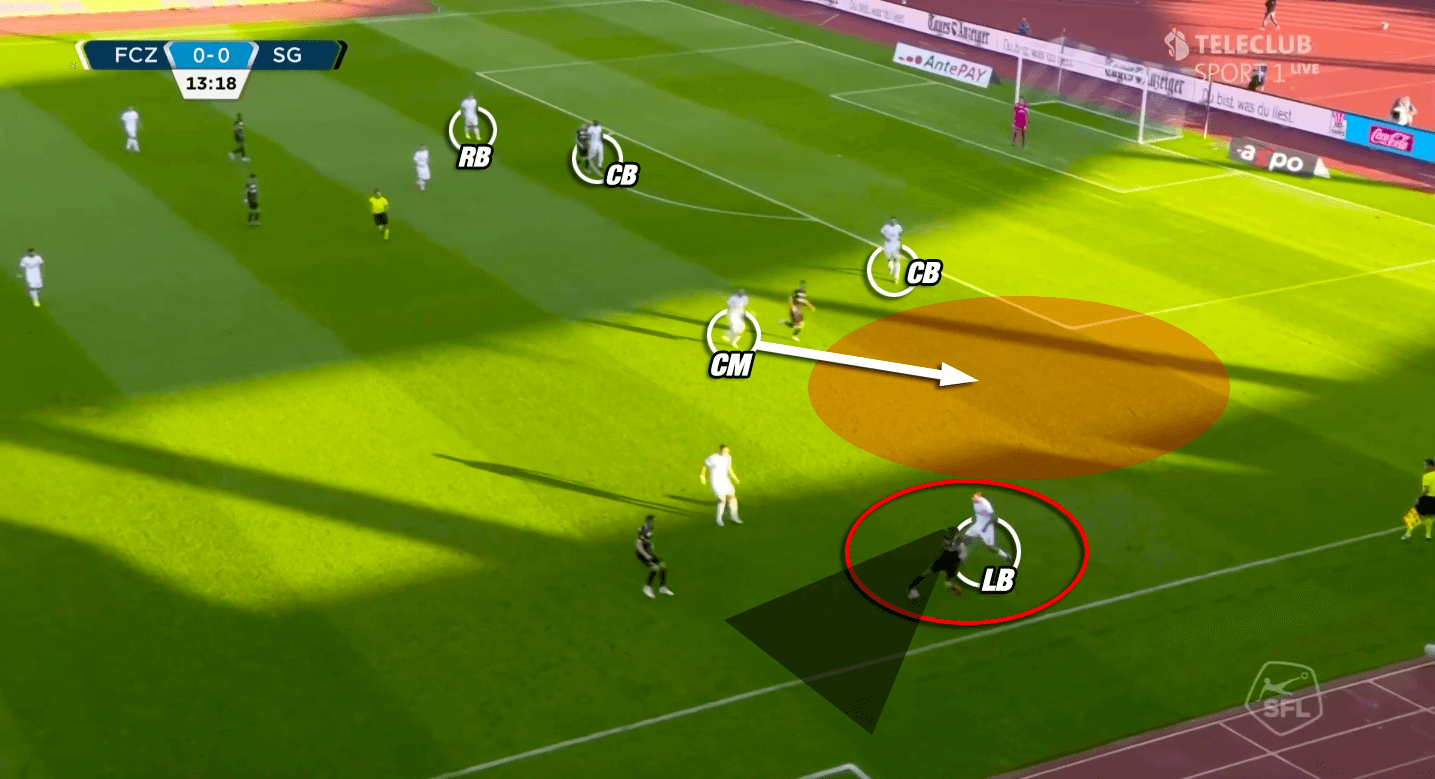 Note how Zürich’s left-back presses the opposition winger from the blind side above. This leaves a line of three defenders in the back. The defensive midfielder fills in the gap between full-back and centre-back.

If an opposition attacker drops and receives the ball in a central area, often one of Zürich’s centre-backs would step out like displayed below. 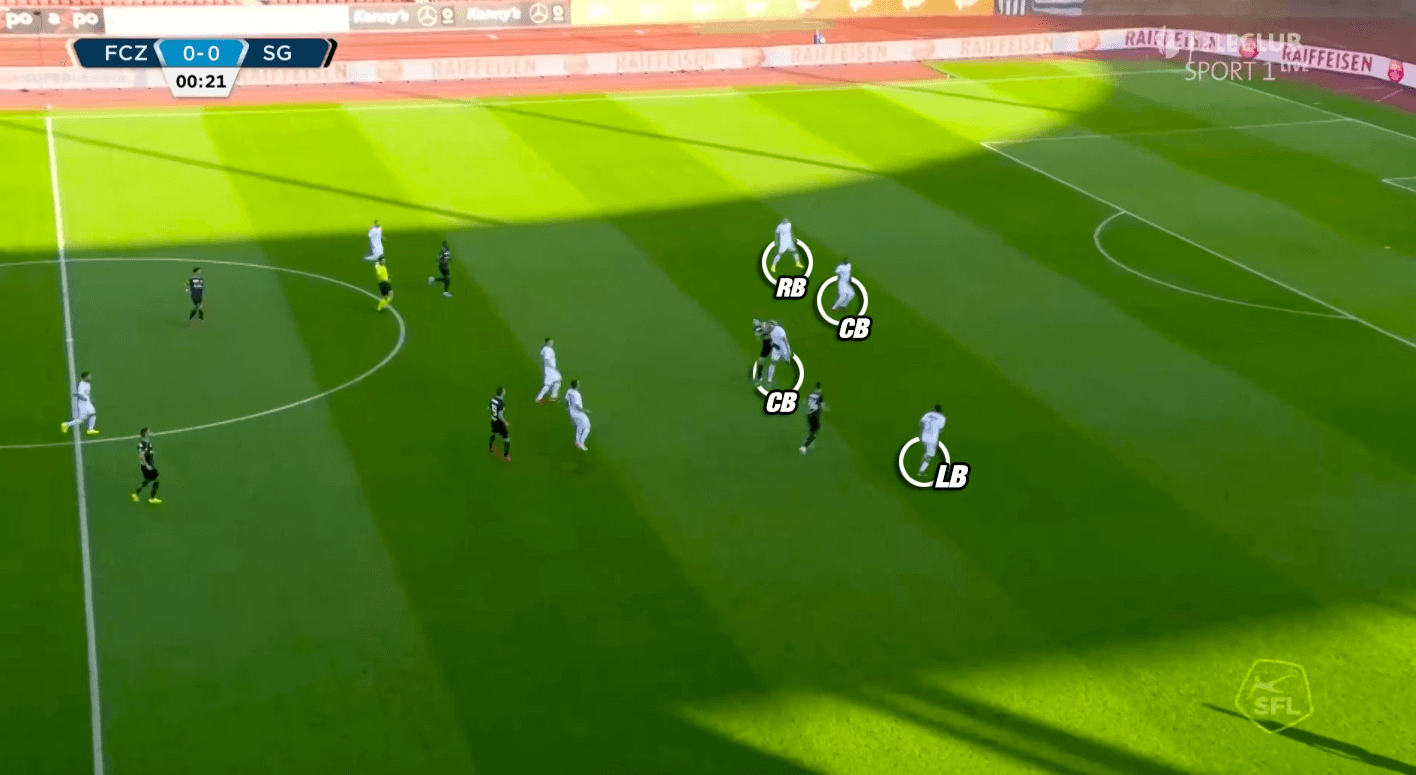 That is different from many sides which want their midfielders to stay in a more defensive position to take over the opposition attacker. Magnin’s strategy to deal with these situations enables their midfielders to focus on defending the space in front of them which makes their pressing more aggressive. Due to the narrow positioning of the defenders, there is still a backline of three players in case one moves out to press.

Their active press in midfield allows the attackers to take in positions from which they can quickly exploit gaps within the opposition defence once having regained possession. Below it is clear to see how well Zürich are set up to start a dangerous counter-attack. 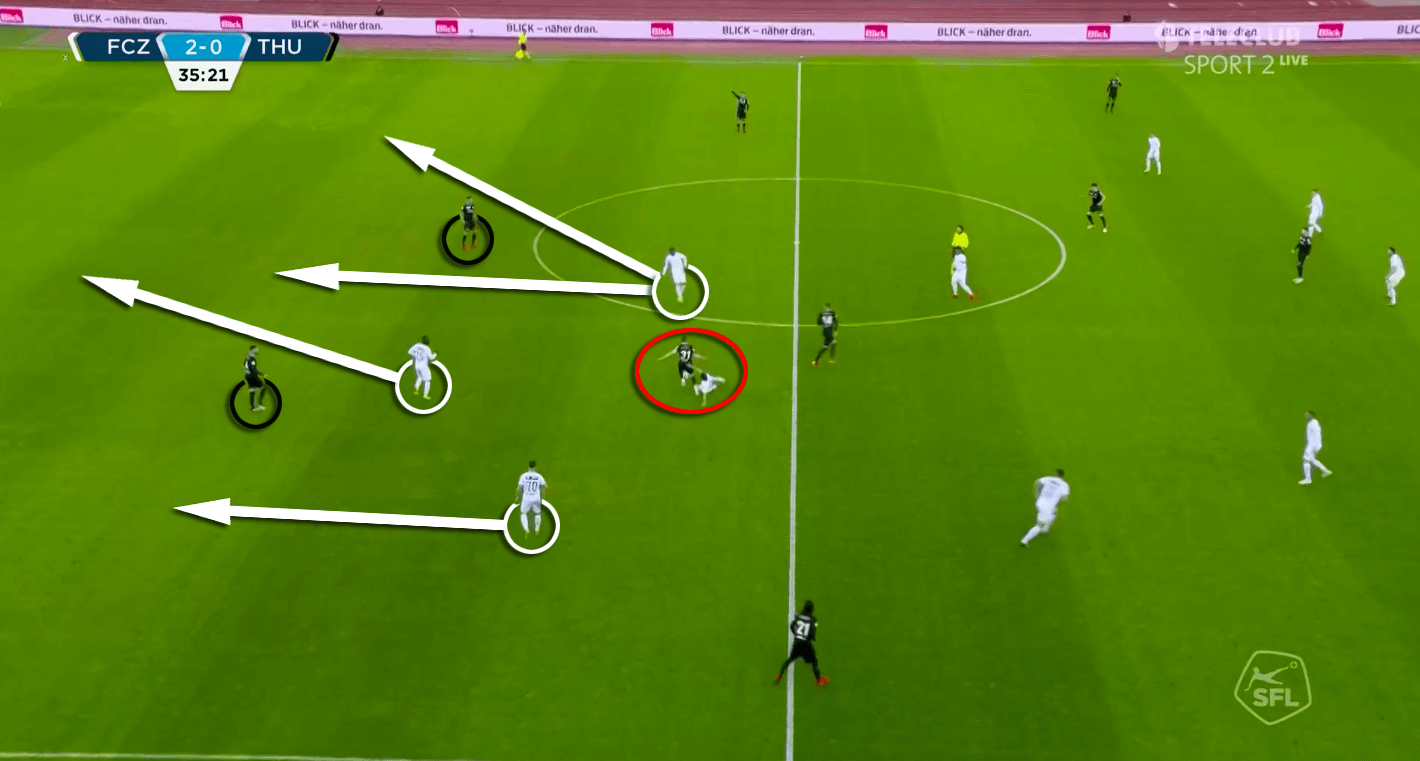 The fact that the whole team moves up the pitch after playing forward also holds another advantage besides the support for their attackers – it allows for a quick counter-pressing after losing possession. In the situation below, seven players are high up the pitch and quickly counter-press the opposition. 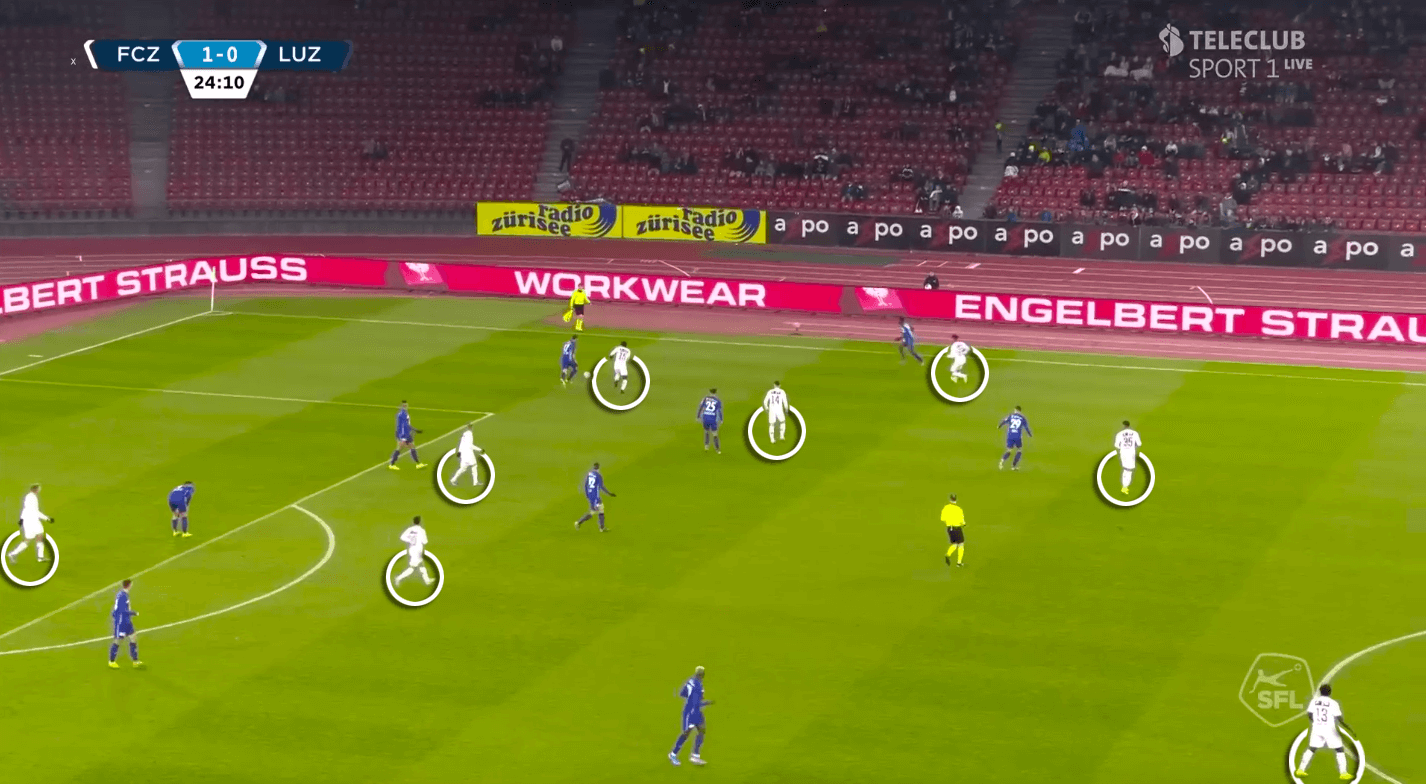 The counter-pressing is also facilitated by the rare usage of long balls during possession phases. To play their preferred short passes, they need to keep shorter distances to each other. Therewith, their shape entails a compactness which is helpful for their counter-pressing.

Weaknesses of Zürich under Magnin

One of their weaknesses of Zürich under Magnin clearly is their defensive behaviour in the penalty area. As said before, their back four defends space-oriented during the press. This is a reasonable defending approach. Defending within the own box though, it is important to stay tight with the opposition attackers. Zürich’s defensive department sometimes failed to switch to this rather man-oriented way of defending in goal near areas (see below). 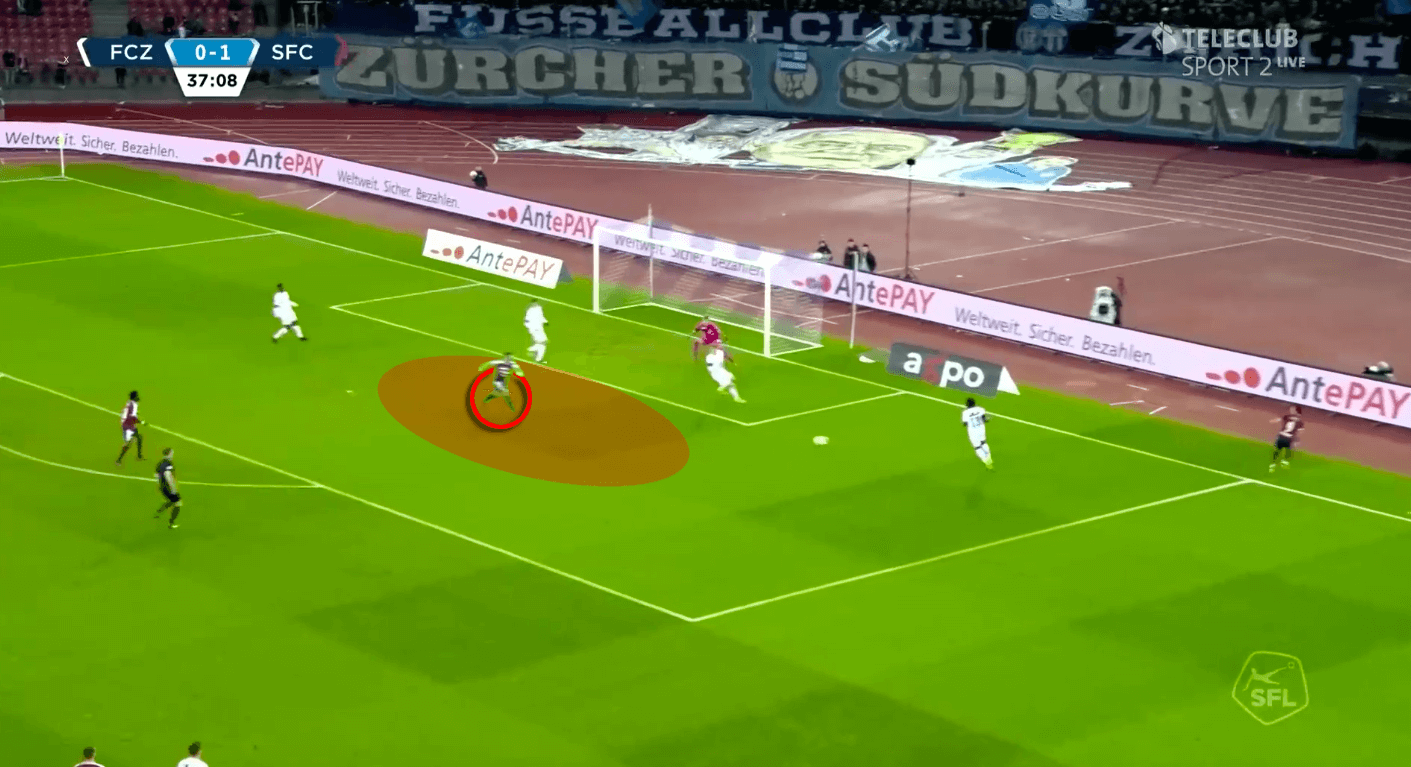 And at the moment, Magnin’s side concede too many goals from opposition wing attacks.

In addition to that, the forward movement of their defenders also includes some defensive risks. When their defenders lose defensive duels after moving out of position, Zürich are vulnerable in the back. Although they can still close central gaps most of the times, the opposition can exploit the wide spaces which are left vacated by the full-backs who move inside to fill in the gaps (see below). 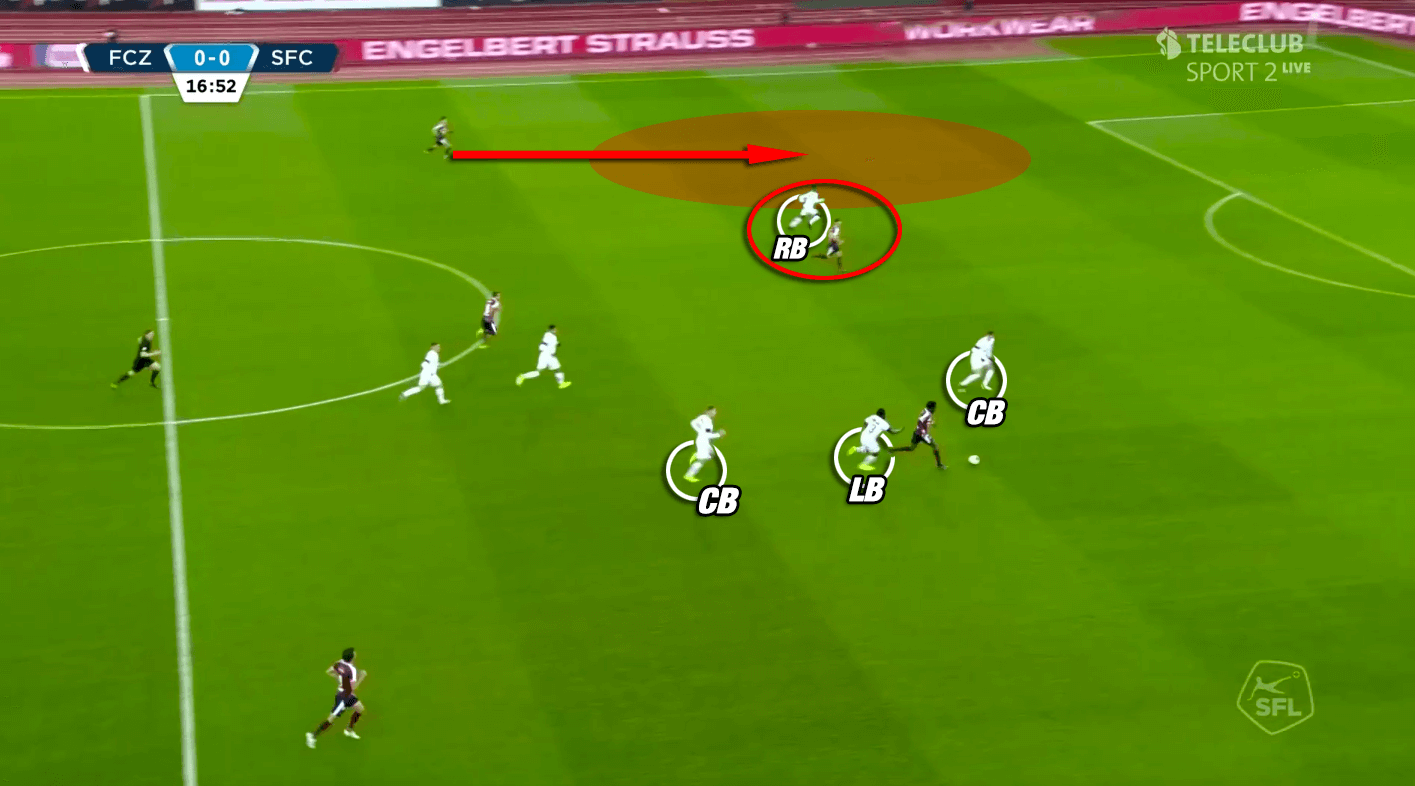 Nevertheless, any way of defending also comes along with certain disadvantages. Under Magnin, Zürich take risks in order to execute a proactive way of defending. The Swiss manager will just need to make sure to keep the right balance between chances and risks.

As shown in our analysis, Ludovic Magnin prefers an energetic style of play. The possession phases always need to be purposeful while the press is supposed to prepare for dangerous counter-attacks. Nevertheless, despite these clear tactics, there are obviously still some issues which should not be overlooked. Especially their defensive department seems vulnerable and will need to gain more solidity in the future.