Among the four clubs in contention for the Meisterschale, Borussia Mönchengladbach were arguably the most unexpected heading into the season. With the third-most expected goals at 50.76xG and eighth-lowest expected goals against at 35.66xGA, the club’s overall output initially looks relatively familial. Yet when it comes to tactical acumen and style of play(among many other factors), Mönchengladbach have proven themselves time and again as one of the most difficult teams to play against in Germany. One weapon Mönchengladbach have utilised well this season is the squad depth available to the coaching staff, and one sound example of a key rotational player at the club is young Slovak international László Bénes.

With an early end to the 2019/20 season being a very distinct possibility, this tactical analysis scout report will focus on Bénes’ style of play this season and examine how Mönchengladbach can utilise his strengths next season.

Bénes generally occupies the central midfield areas of the pitch on either side of the centre circle in Mönchengladbach’s 4-3-1-2 and 4-3-3 formation variations. This season under manager Marco Rose and co. that has primarily meant the advanced midfield zones in the right half-space. 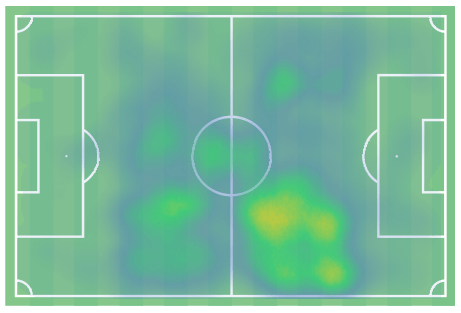 In the heat map above, we can clearly see the areas Bénes occupies. While there is occasional movement into deeper or more advanced areas including the attacking midfield spaces, Bénes typically maintains his positioning in the midfield half-spaces.

With Mönchengladbach in possession, Bénes takes up the right half-space areas, with the full-backs moving forward in the wide areas alongside the midfielders. This along with the defensive drop-back of the central defensive midfielder in Mönchengladbach’s midfield three creates the 3-4-3/3-4-1-2 structure commonly seen via teams that play a 4-3-3/4-3-1-2 in possession. 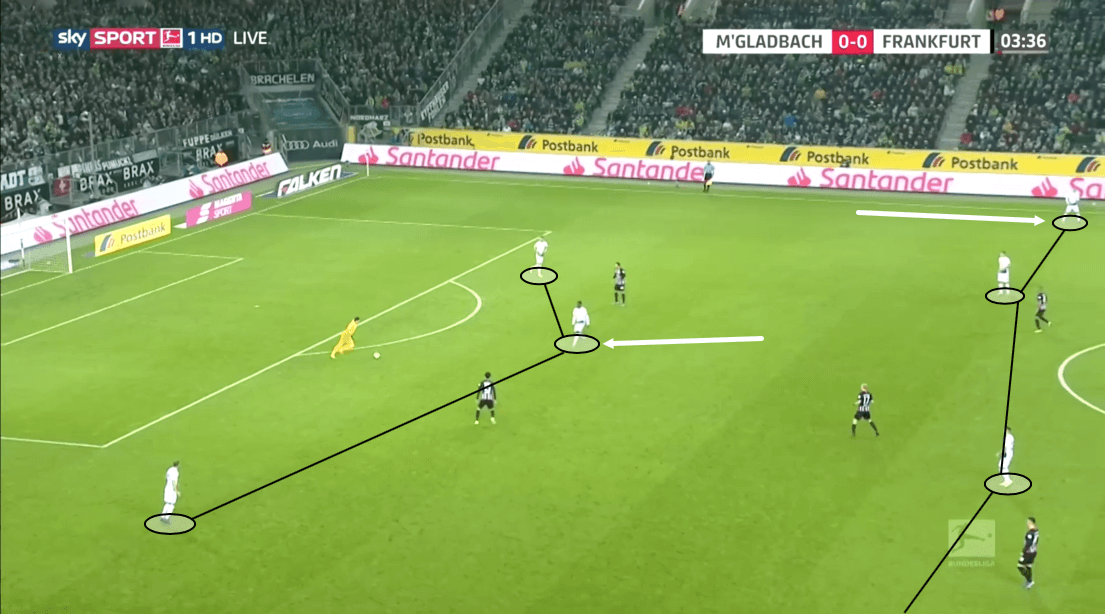 The specific example above shows central defensive midfielder Denis Zakaria drop deeper to aid in distribution from the back creating a 3v2 numerical advantage, while left-back Oscar Wendt pushes forward into the left wide areas alongside midfielder Florian Neuhaus. Bénes is positioned as the other, more attack-minded central midfielder.

When out of possession, Mönchengladbach’s front six either counter-press or drop into a defensive structure in their defensive half depending on the opposition’s ability against specific defensive tactics. 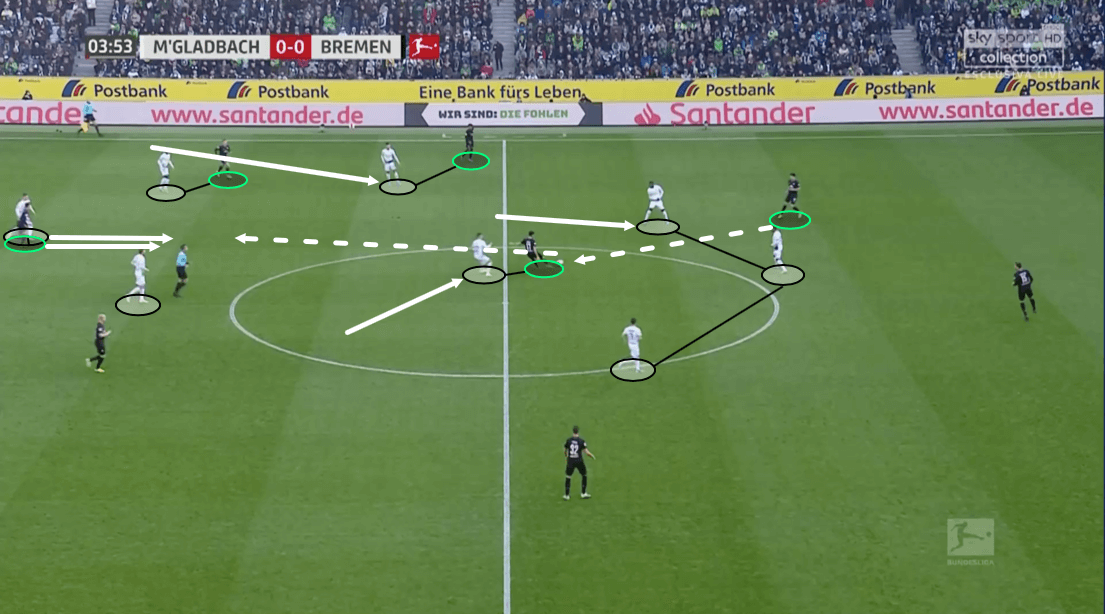 In this match against Werder Bremen, Mönchengladbach focused on shutting down Bremen’s quick attacks through organised pressing, seen here. The ball-side winger in the front three, in this case Marcus Thuram, pressed the ball directly. In turn, Bénes moved forward as the more attacking central midfielder to press the receiving player. While both these presses were theoretically late to their man, the body angle Bénes used on his press forced the receiving player to limit the following quick pass to that side, which Mönchengladbach had overloaded with a 5v4 numerical advantage defensively. This combined with the aggressive pressing by the centre-back forced a turnover.

As with many teams in the fast-paced Bundesliga, Mönchengladbach’s possession and ball progression is highlighted by quick, line-breaking attacks using two methods: buildup from the back, and long balls over defensive pressing or structures. In the image below, centre-back Matthias Ginter hits a long aerial ball over Bremen’s aggressive diamond midfield. The pass reaches striker Alassane Pléa, who has dropped back centrally to bring down the ball. The Frenchman taps it timely to Bénes, who has beaten the opposing central defensive midfielder at the bottom of the midfield diamond and is making a run into the opposing half. 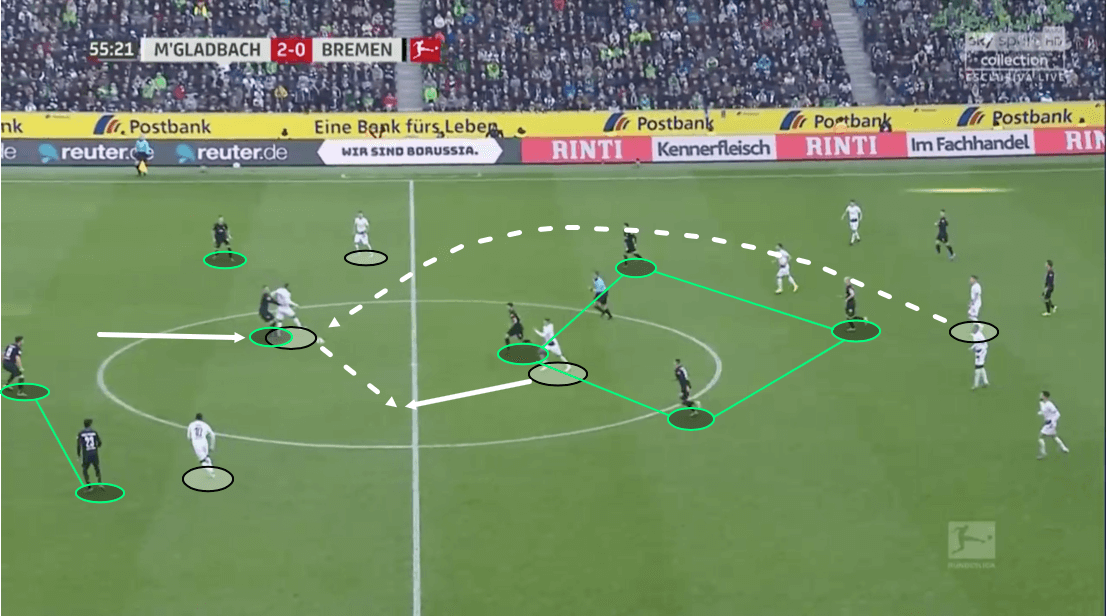 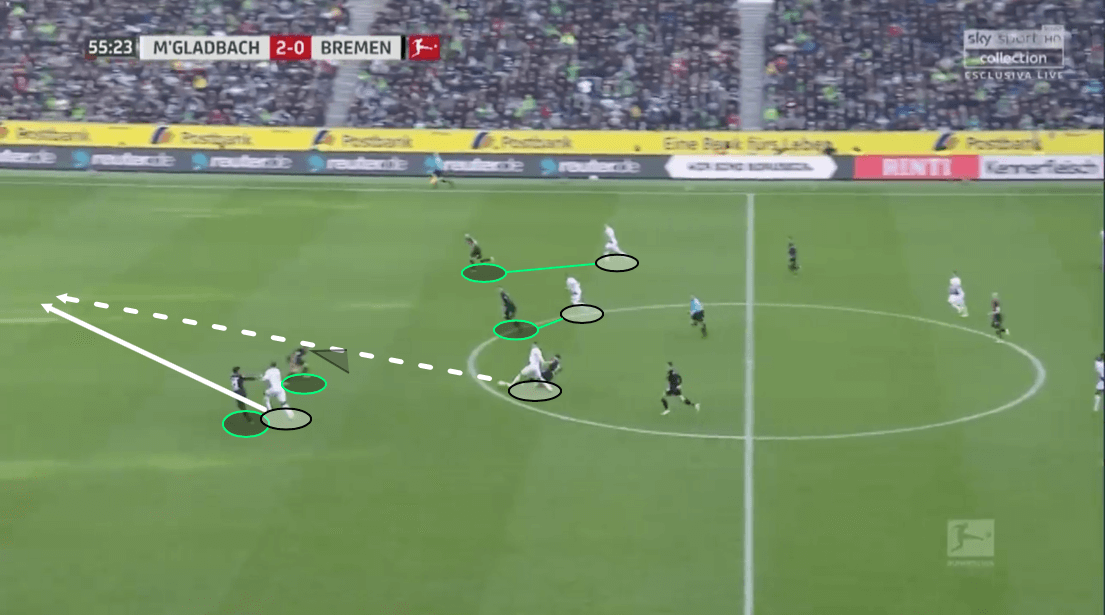 Benes is also considerably involved in Mönchengladbach’s progression from the back, as he excels in getting into spaces between the lines. We can see an example of this below against Wolfsberger in the Europa League. He receives the ball from the back and completes a one-two passing move with Thuram, who has dropped back from his second striker position to aid in the buildup. This movement on the ball-near side of the pitch has lured the ball-far midfielder in Wolfsberger’s diamond midfielder towards the central spaces, which left Wendt open down the left side of the pitch. Bénes turns in space after moving past the opposing central attacking midfielder at the top of the diamond and completes the long pass. 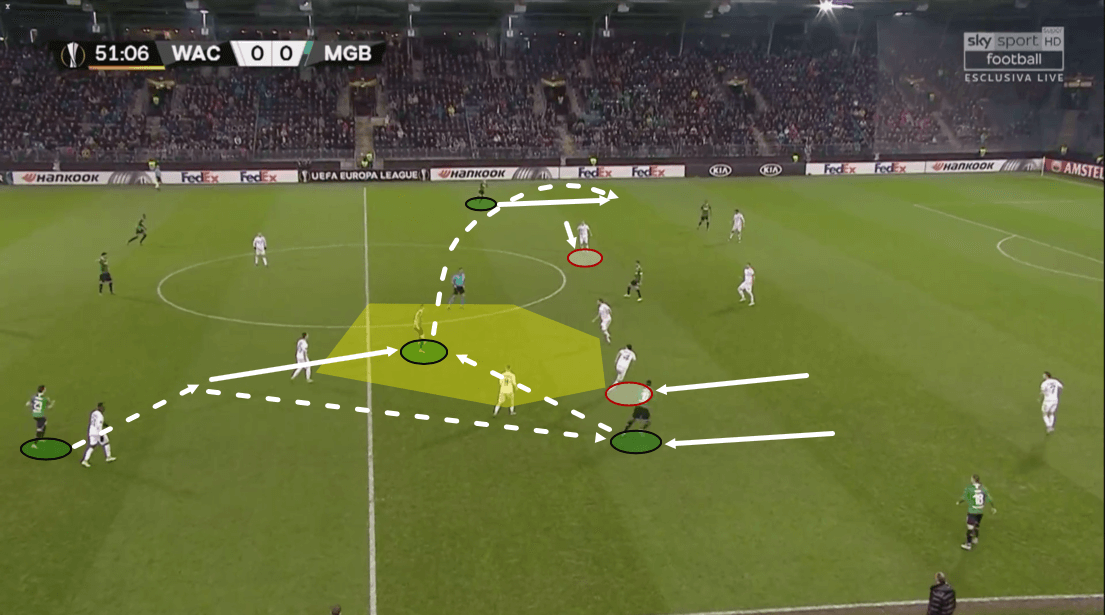 In the attacking areas, Bénes again specialises in the advancement of possession using quick, line-breaking passes. Off a throw-in, Bénes recognises the empty space in the right half-space between Wolfsburg’s lines. He progresses into that space and receives the ball off a turn from Breel Embolo. 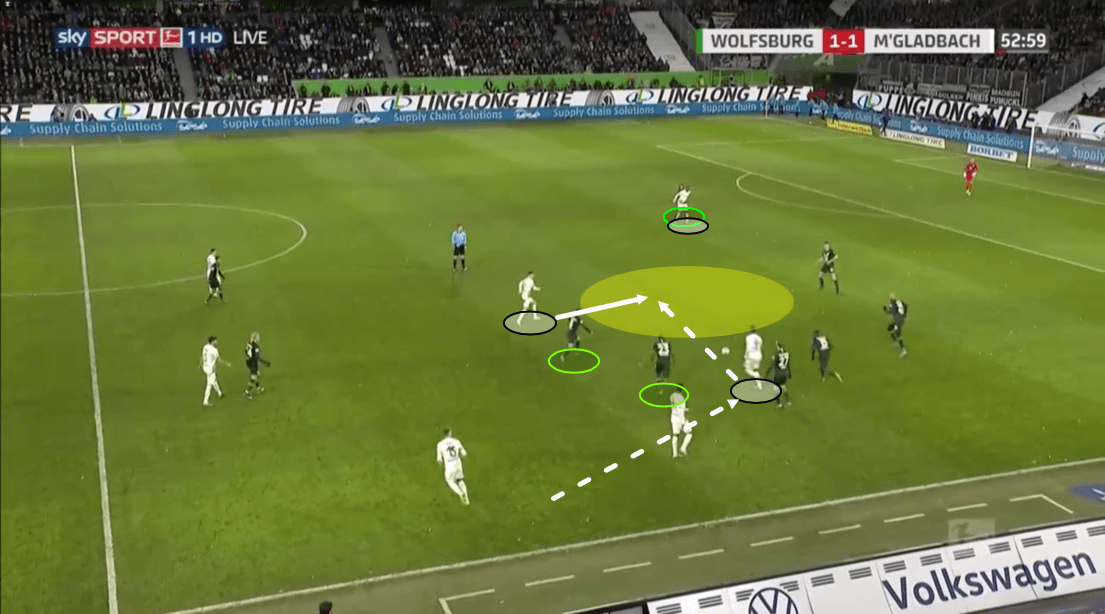 Bénes is then able to complete a pass through the last defensive line to connect with Thuram, who hits his shot on target. 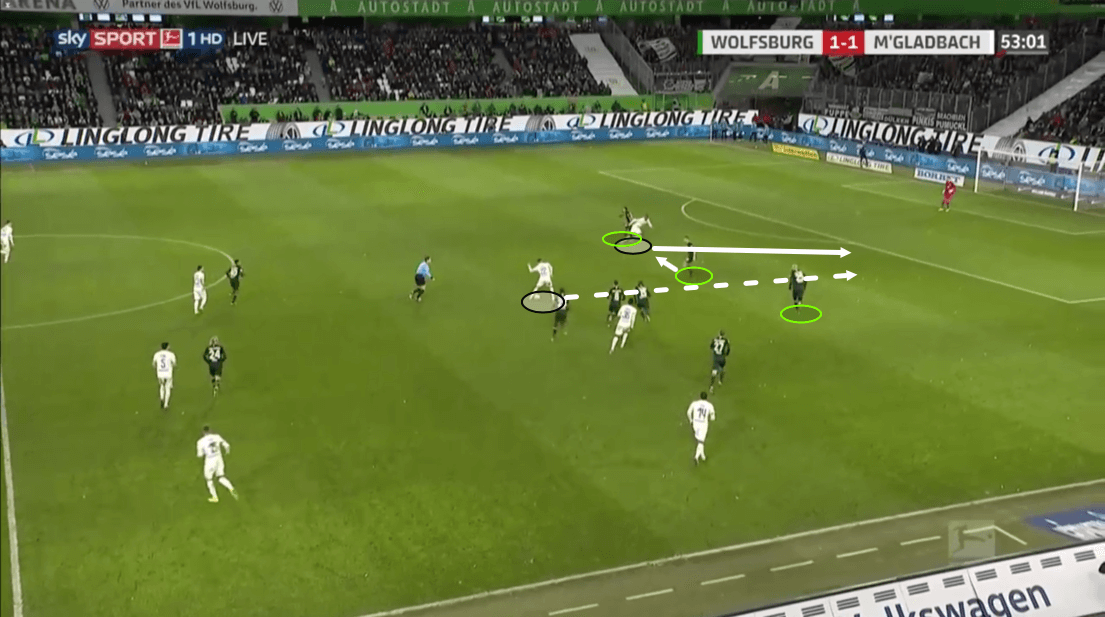 Despite seemingly playing second fiddle to the front two or three attackers in final third progression, Bénes actually leads Mönchengladbach in a number of passing statistics(among players with more than six appearances). The 22-year-old currently tops his side in key passes per 90(2.31), accurate final third passes per 90(12.78), and accurate opposition half passes per 90(24.24). Below is a pass map of Bénes’ key passes over the past year. 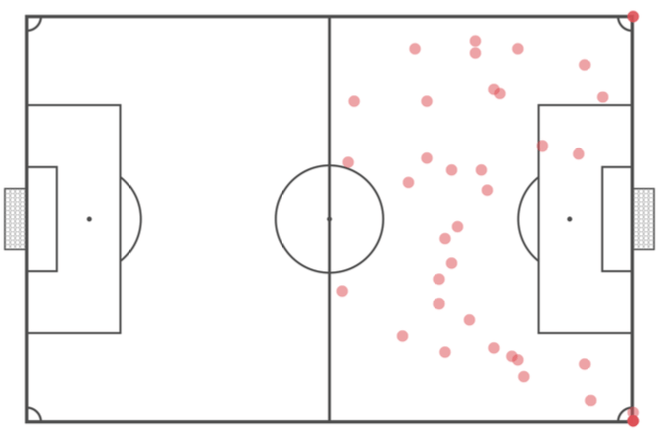 Notice a number of these key passes also come from the corners, as Bénes has proven himself a valuable set-piece taker, both on free kicks and corner kicks. On the set-piece play below, three of the Mönchengladbach players in the box drop forward and near, which relieves defensive pressure on the man behind them. Bénes reaches this open man on the free-kick and receives an assist for his efforts. 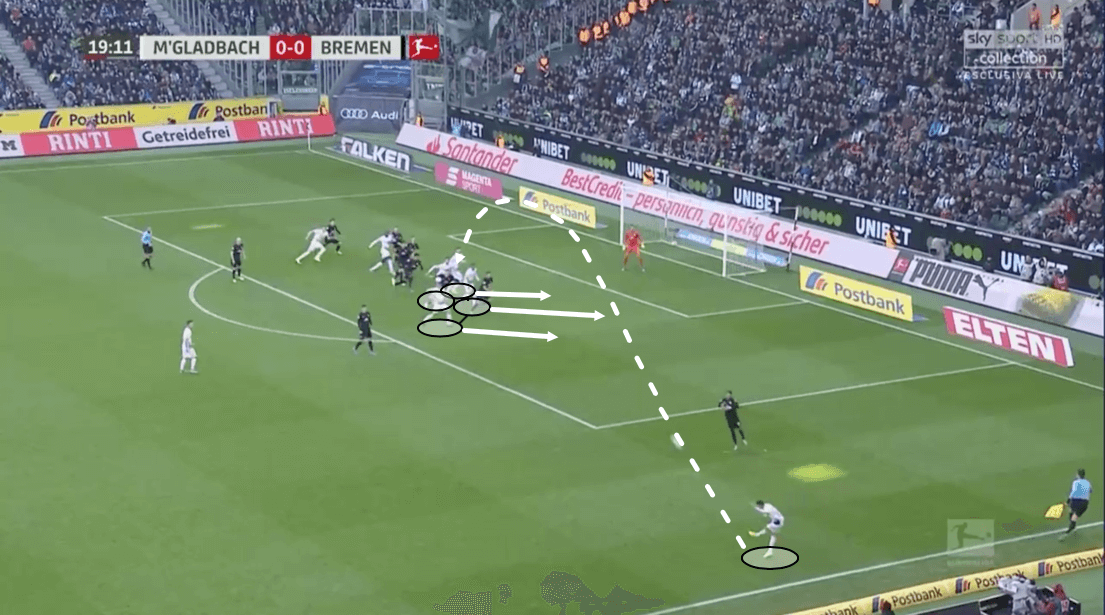 Lastly, Bénes contributes very little when it comes to finishing, only averaging 0.8 shots per match this season, but this is largely down to the style of play Mönchengladbach and the midfielder’s positioning.

Defending with the press

The primary flaw in Bénes’ playing style is the lack of effective pressing ability. The figure below explains Mönchengladbach’s pressing in a 4-2-3-1 positioning against Bremen. As Bremen look to progress quickly from the back, the striker presses the ball-side centre-back while the central attacking midfielder, in this case Bénes, presses the opposing six. This leaves the wide ball-side midfielder to press the ball-side full-back and the ball-side deeper midfielder to press the Bremen’s ball-side central midfielder, with the deepest Mönchengladbach midfielder holding his position to cut off any remaining central passing outlets or dropping back to intercept press-relieving long balls. In this scenario, the press ultimately forces a turnover farther down the pitch. 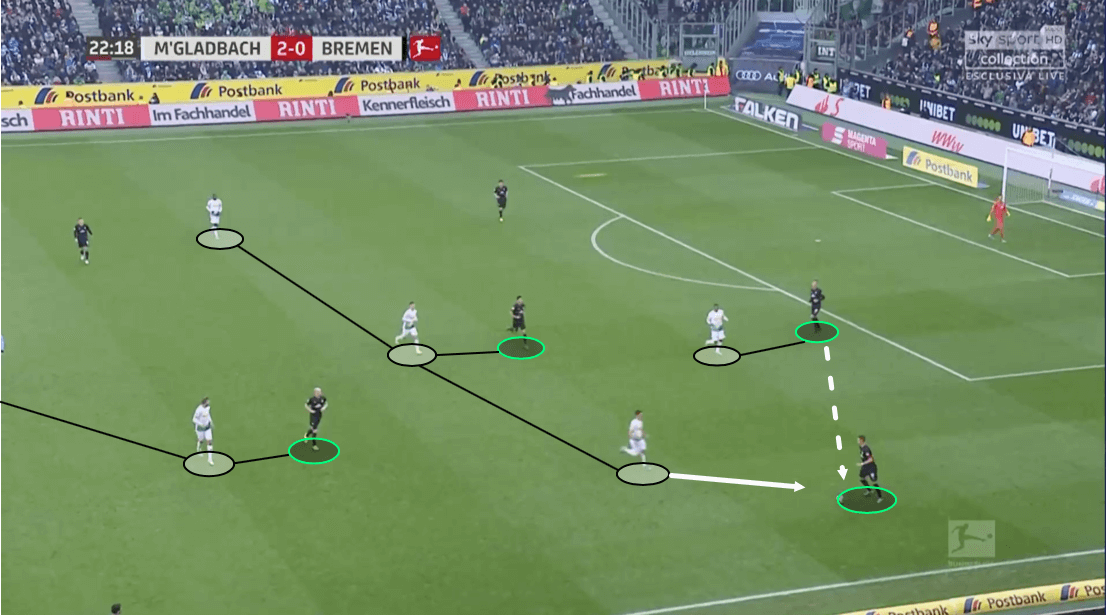 In a number of pressing situations, Bénes can be seen arriving too late to his man or caught in no man’s land between multiple opposing players, leaving passing lanes open for the opposition to progress in midfield. Below against Frankfurt, Bénes presses at an indecisive angle. Dropping into this empty space defensively allows the opposing diagonal pass to be completed into the half-space and congruently opens up a 3v1 scenario against his teammate behind him, giving the opposing receiving player multiple passing options. 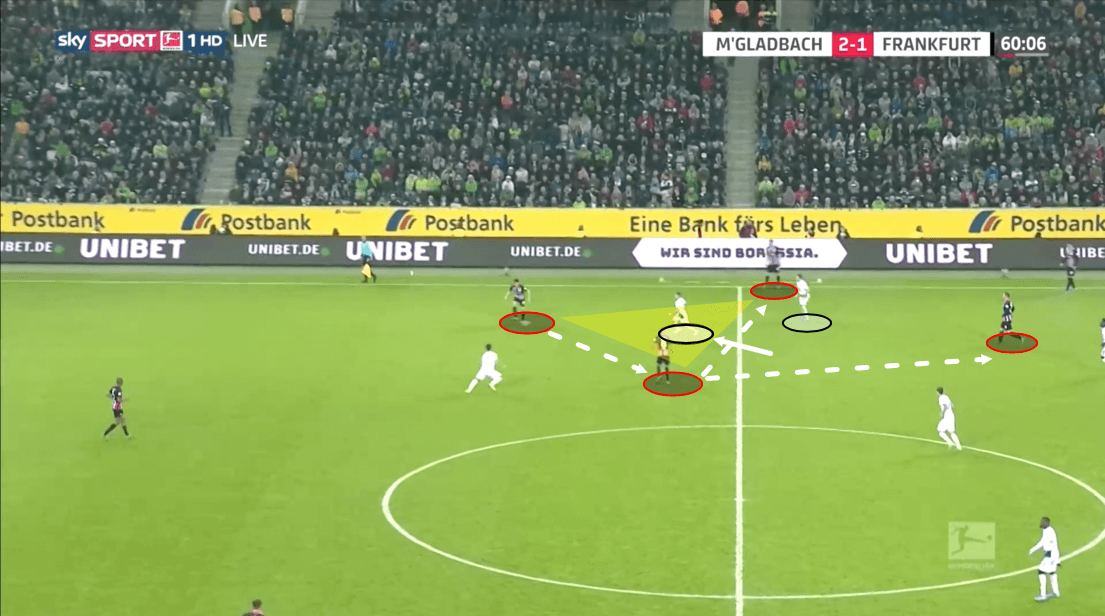 Pressing angles and press positioning can certainly be taught, but with a number of Bundesliga sides focused on pressing schemes Bénes could look to improve in this area.

At Borussia Mönchengladbach, Bénes has played periodically this season, starting in 14 total matches in all competitions and averaging 63 minutes per league match. One tactic that Bénes has seen an improvement in, and something Rose has implemented lately this season upon analysis, is his presence closer to the front attacking lines. This doesn’t mean simply moving Bénes to the 10 position, but rather giving him more freedom forward from his half-space midfield position. 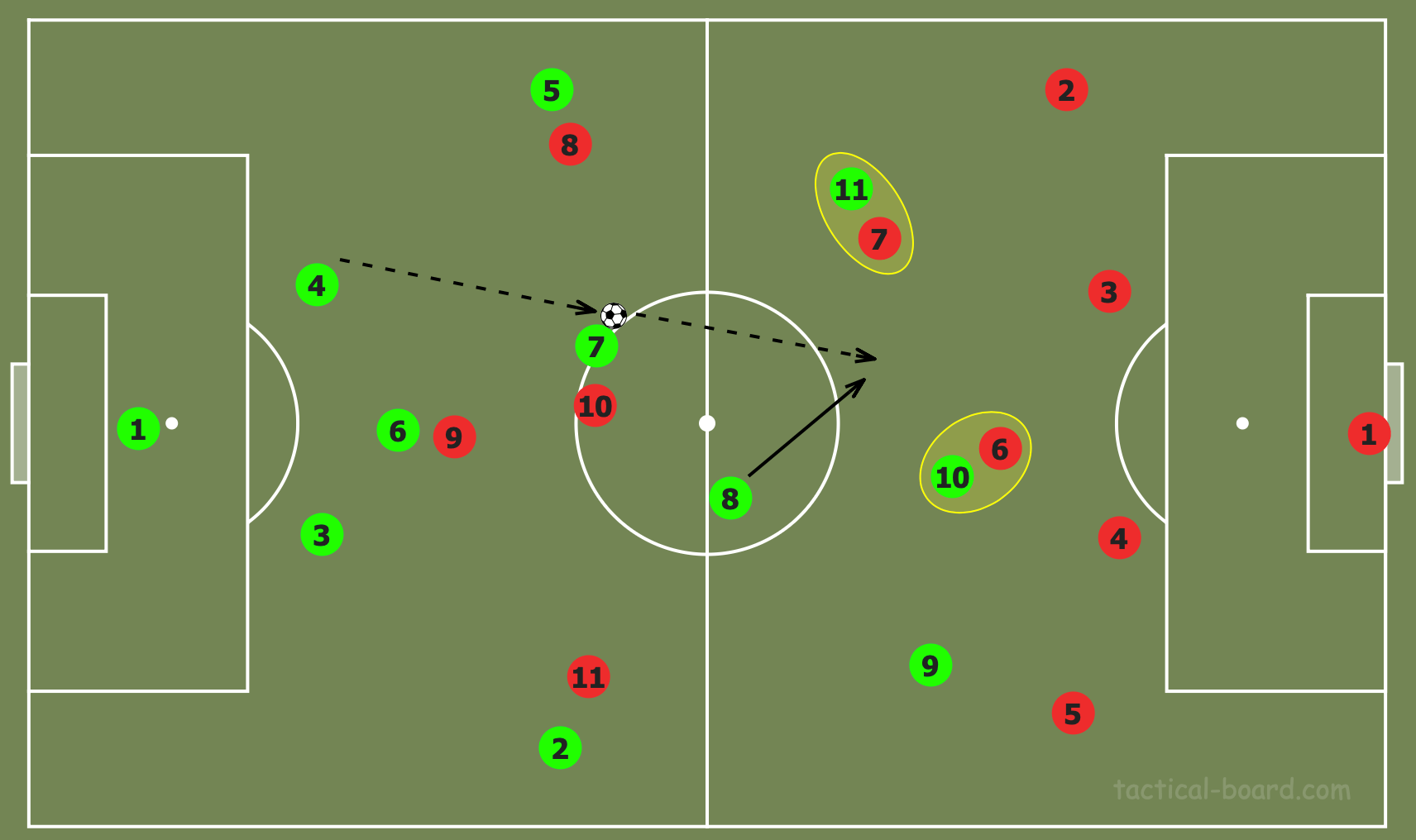 The diagram above is one instance in which Bénes can be utilised moving forward, specifically against a structured side such as Borussia Dortmund. Building up possession from the back, the centre-back can either progress through the other central midfielder or using a long ball past him towards Bénes. With the ball-side winger and the striker occupying the two deeper opposition midfielders, Bénes has space in the advanced central area to receive the ball and create an attacking play in the final third. This scenario would, of course, require a pass-oriented centre-back, but with one of the better passing centre-backs in the league with Nico Elvedi, continued utilisation of long balls into Bénes’ advanced areas could improve Mönchengladbach’s scoring output.

Bénes has shown he can operate from the advance midfield areas into the front line of the attack smoothly. In this example below, Lars Stindl, playing as the striker, dropped back and towards the touchline to receive the ball. This spread out Frankfurt’s back three defensive line, and Bénes saw this and took advantage. He made an aggressive run forward into the gap in the backline, thus resulting in a 2v1 man advantage for Mönchengladbach. Unfortunately in this case winger Patrick Herrmann took a poor touch on the ensuing pass from Bénes, ending the attack. 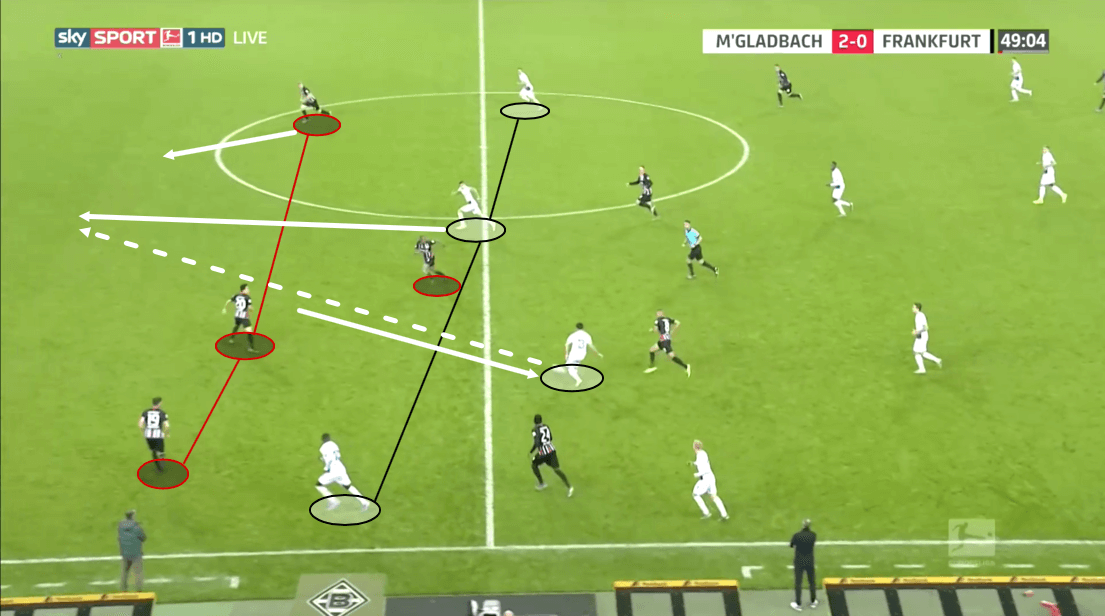 Again, this doesn’t necessarily require positioning Bénes as a 10 to begin with, but rather opening that space for him to create. Thuram, generally regarded as the classic 10 in Mönchengladbach’s starting lineup, has seen a shift into the wider or more forward areas of the pitch and has thrived regardless.

Even against a more aggressive pressing opponent, such as Bayern Munich, Bénes could take advantage in more advanced spaces. Once again we see the opposing striker press the six, and the opposing six press the most attacking midfielder, in this case, Bénes. The Slovak whoever has shown he knows how to complete quick manoeuvres behind the press, and does so here. With one of the opposing centre-backs pressing the striker, Bénes’ possession of the ball in this advanced area would make it difficult for the defending backline to adapt, and could potentially create a 2v1 attack against the last man. 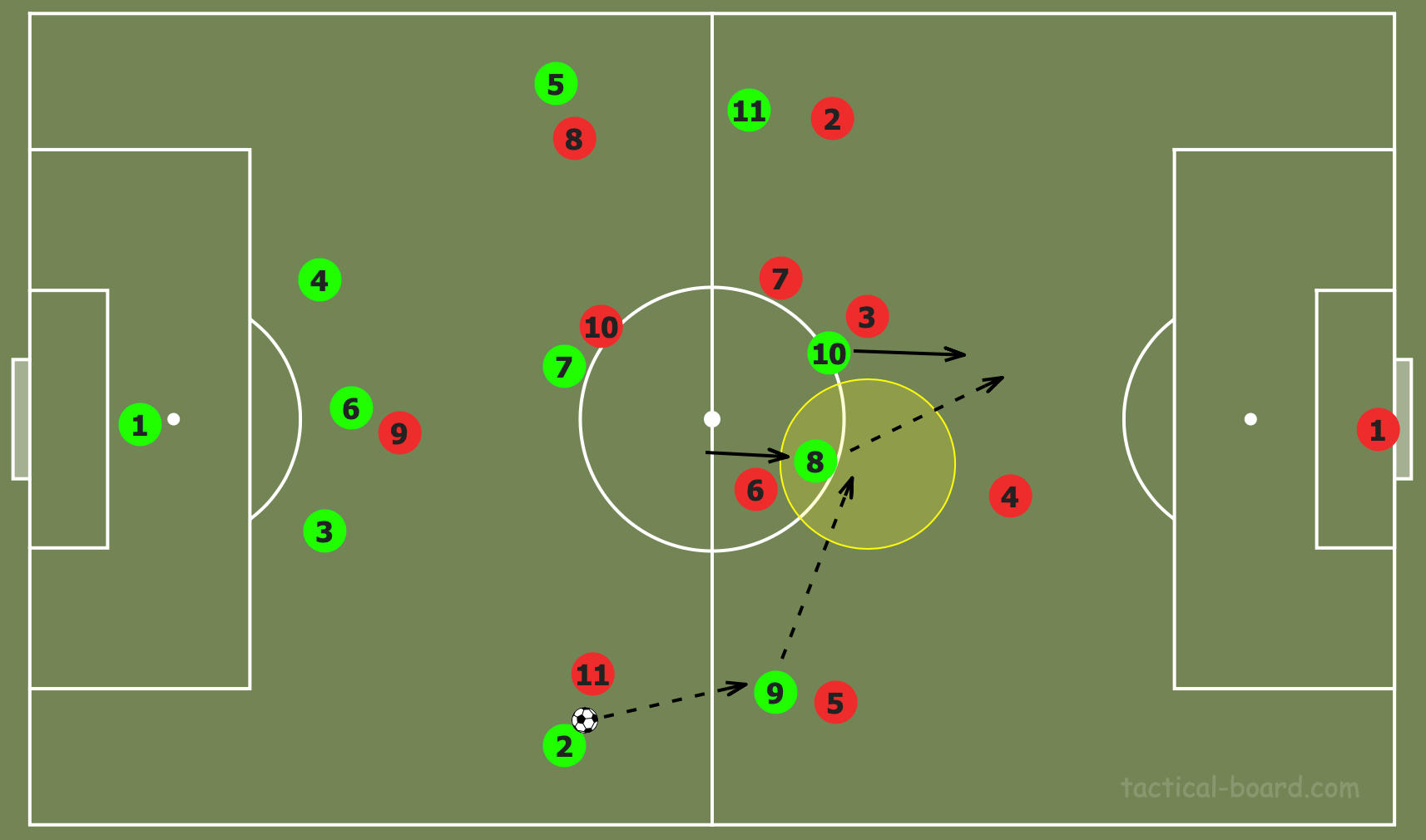 Squad rotation, particularly in the midfield, is a highly valuable tool for Mönchengladbach, and with an average player age of 26 years old, many players at the club are in or near their prime regarding ability. This along with his struggles in the press are valid reasons to rotate Bénes, but what he could provide in attack if used more frequently is considerably advantageous. These positions emphasise Bénes’ attacking and creating ability while minimising his shortcomings in the press through numerical advantages via his teammates behind him.

As previously stated, whether completion of this Bundesliga season comes to fruition is uncertain. Regardless of whatever the eventual decision may be, Borussia Mönchengladbach can hold their heads high in what has been one of the best seasons in recent club history. The coaching staff along with the team-focused squad have proven they are greater than the sum of their parts, and László Bénes has played a rather under-appreciated if not significant role in that.

Next season, Mönchengladbach can utilise Bénes’ attacking strengths in more advanced areas. There is little doubt the 2020/21 Bundesliga title race could be as close as this season, and with the depth and types of players the coaching staff have at their disposal, supporters of Die Fohlen could be in for another intense and exciting campaign.