For the first time since 2013/14, a team other than Barcelona or Real Madrid were crowned champions of Spain last season. However, both the teams are in bigger troubles, mostly financial, going into the 2021/22 season. The 2020/21 season saw some young players from both teams make a name for themselves in the big stage. The stand out performer among the youth was Pedri who followed up his good performances in the La Liga with his heroics at the Euros. For Madrid, the performances of Federico Valverde and Vinícius Júnior stood out.

The 2020/21 season also saw the best of few other young players from La Liga including Alexander Isak of Real Sociedad, Marc Cucurella of Getafe and Jules Koundé of Sevilla. All these players are linked with moves away from La Liga. But the one player who will definitely stay in La Liga for the upcoming season is Éder Militão of Real Madrid. This is a big season for the centre-back, who turns 24 in January, signed from FC Porto in 2019 given that Sergio Ramos has already moved out of Madrid and Raphaël Varane is also set to move to the Premier League.

The following is a visualisation of Éder Militão’s numbers from last season. Centre-backs aged only 23 or under at the start of 2021/22 season were considered for this analysis. 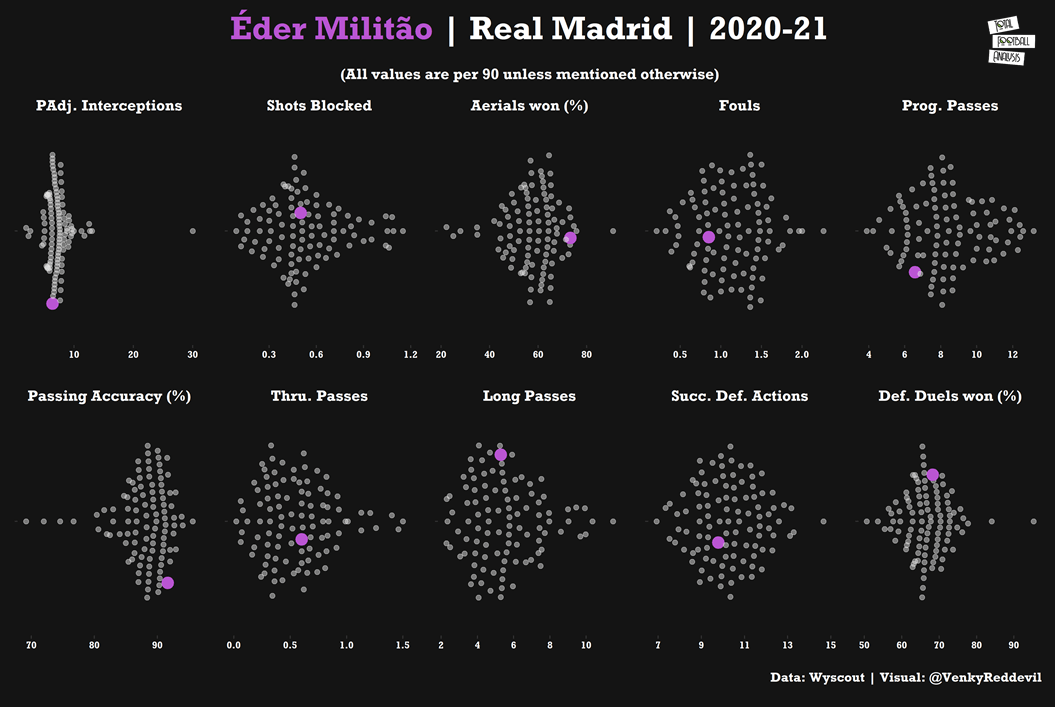 Militão played only twelve 90s last season. However, the departure of Ramos and potentially Varane should see the Brazilian feature more regularly in the upcoming season. In fact, in his two seasons at Madrid, he has not played more than 1500 minutes.

Militão is very good aerially and only three other centre-backs aged 23 or under had a better aerial success rate than the Madrid defender. His 1v1 defending is also better than most with the centre-back’s duel success rate at 69%. Militão’s passing needs to improve and he often needs to look forward to facilitate the attack for his team but, with consistent gametime, it is something he can definitely improve.

Injuries and form have curtailed Militão’s first two seasons at the Spanish capital but departures mean that Militão will be definitely getting his chance now and he will be looking to impress manager Carlo Ancelotti and stake his claim at centre-back for the years to come at Real Madrid.