You wouldn’t have thought that any teams would have a better record than Liverpool this season, however, the Jersey Bulls had a historic first campaign in English football as they won all 27 games in the league and they even stayed unbeaten in the cup competitions. This saw them break the Combined Counties League record for the most consecutive wins after beating British Airways 2-0 in their final league game and this result gained them a mathematical spot into step five. However, due to COVID-19 the FA expunged the season for non-league football and cancelled all the achievements for the club.

There have been numerous reports on The Bulls but in this tactical analysis in form of a scout report I will give a different perspective which showcases their play-style and tactics implemented that helped achieve what no other club in England could.

This season Gary Freeman has used two main formations, the first being 4-3-3. This is primarily used when Karl Hinds is out of the team as Hinds will normally drop in between the lines in the number ten spot. In this formation, Daryl Wilson has been the favoured striker who keeps his central role and is deployed as a target man who holds up the ball for players to play off him, this includes one of the midfield three to make deep runs to help support in attack, in the image below, we can see them in possession in their 4-3-3 formation. In the defensive phase, the players maintain their positions but the wingers will come deeper to keep a solid 4-5-1 compactness making it harder for teams to play through them.

Nevertheless, the preferred formation for The Bulls has been 4-2-3-1. In possession this turns into a 2-4-1-3, club captain James Queree and vice-captain Luke Campbell have both been rigid at the back and this defensive cover allows both full-backs to advance forward. At left-back, Jay Giles has played all 30 games this season and his input hasn’t only been defensive, he has been a focal point in attack for The Bulls. Both of the full-backs will move high up and create a midfield four with the two centre-midfielders and Hinds will stay in the number ten-hole, looking to link up play through the thirds. Finally, the two wide attacking midfielders will keep their width but if the full-backs come into the final third they will come narrower and allow space out wide. 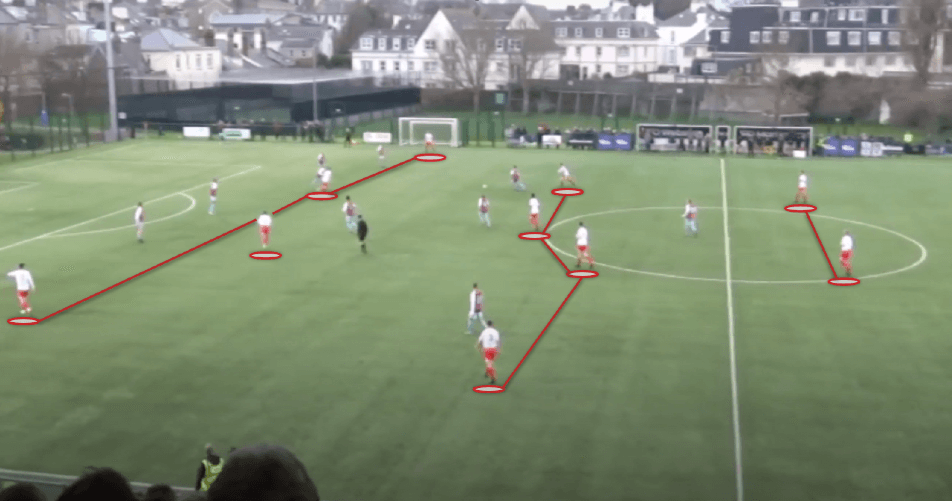 In the image above, we can see The Bulls in possession and both the full-backs advancing whilst the two centre-backs hold their position and Hinds will look to find pockets of space in between the opponents’ defence and their midfield. 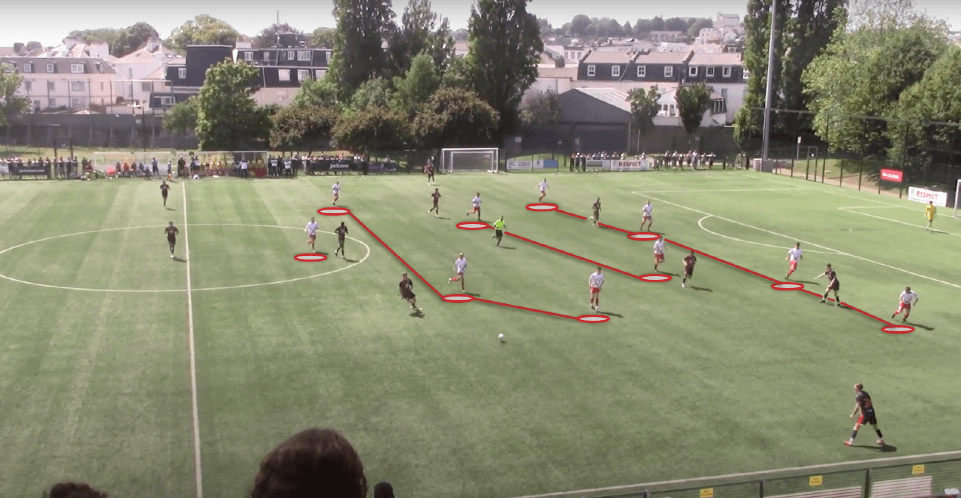 Out of possession, The Bulls remain compact by shuffling as a unit to the ball side. This stops teams playing through the middle of them and creating chances in central positions which are deemed to have more options for a player in possession. In the image above, we can see The Bulls keeping their starting 4-2-3-1 shape and they are all relatively close to their teammates which stops balls easily getting played through the lines.

As mentioned above, The Bulls full-backs a key part in their build-up play and they will push forward; this will pin back teams as the opponents’ wingers need to cover or there will be an overload. This benefits the defence in some aspects as well because the opponents’ striker will be isolated due to the wingers dropping back into a deeper position. In the image below, we can see both of the full-backs in wide and high positions and this has resulted in the opponent’s dropping which leaves space for The Bulls to drive into. 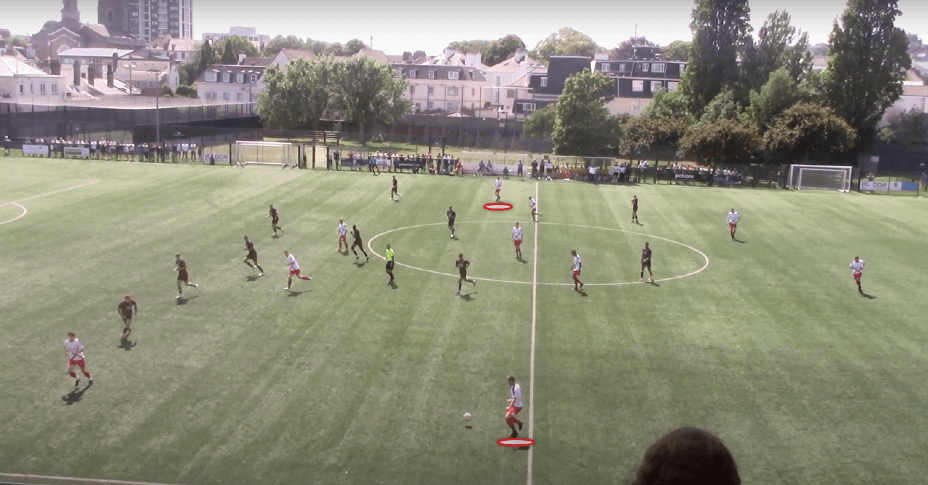 With the full-backs high width this stretches the opponent and allows the wingers to operate in the half-spaces, due to the opposition coming across to close down The Bulls progressed full-backs. In the image below, Giles has the ball out wide which allows his teammate to come into the half-space and allow movement for other players to get in behind the lines. 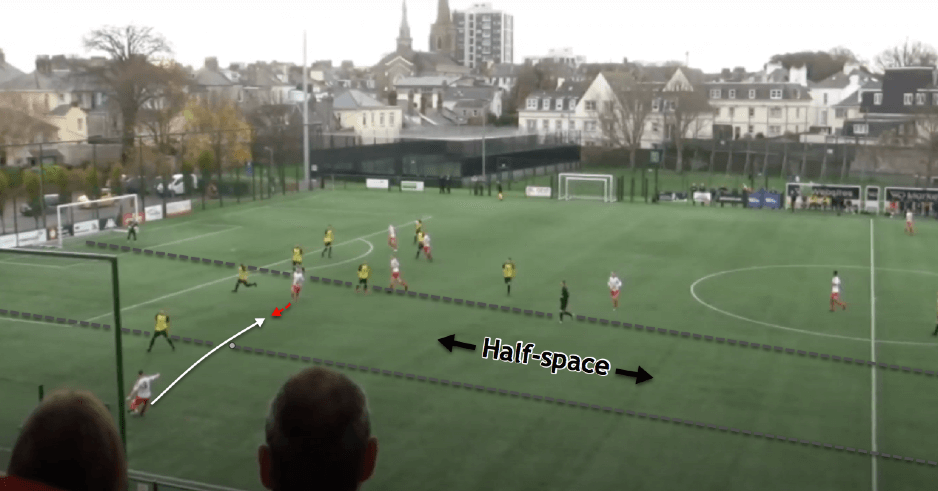 The passage of play continues in the image below as the player in the half-space can turn out and find Hinds who has made a darting run behind the defence. This works successfully because if the opposition doesn’t close Giles he has a quality cross which he can use if they give him time out wide and he can find his teammate. However, if the opponents do come out to press him then he can link up with an attacker and allow them to play in the half-space. This can be seen as a more effective play due to the player having more options in a more central area with 360 degrees of options, rather than being limited to fewer in an out wide position which only has 180 degrees of options. 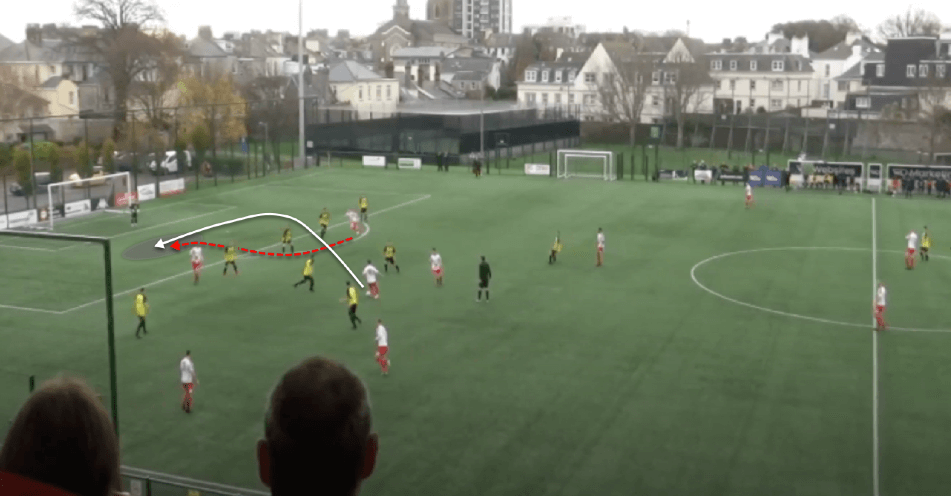 Consequently, by the full-backs maintaining a high position this can leave vacated space in the channels and leave both Queree and Campbell alone at the back. In the image below, Giles and Gabbiadini have both been caught out in the transition phase with no cover from both of the centre midfielders. Nevertheless, The Bulls have been able to cope with this as Campbell and Queree are both great at delaying opponents and making last-ditch tackles. In this play below, they were calm under pressure and kept the team at bay. Plus, if they manage to get past them two they still have to get past Euan Van der Vliet. This season The Bulls have only conceded seven league goals, which is the fewest in across all tiers in England. 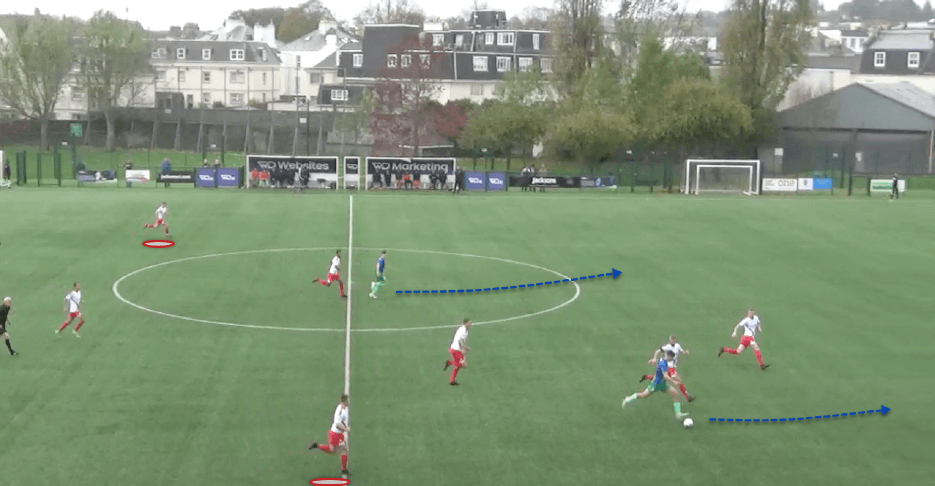 In the defensive phase, The Bulls will look to pounce on bad touches/poor passes and by doubling up on opponents to regain possession. In the image below, Kamen Nafkha has left his position in central midfield and closed down after the opponents play a slow ball into their teammates’ feet. Here they recover possession in the final third and they quickly take advantage as he slides it across to Fraser Barlow who slots it away. 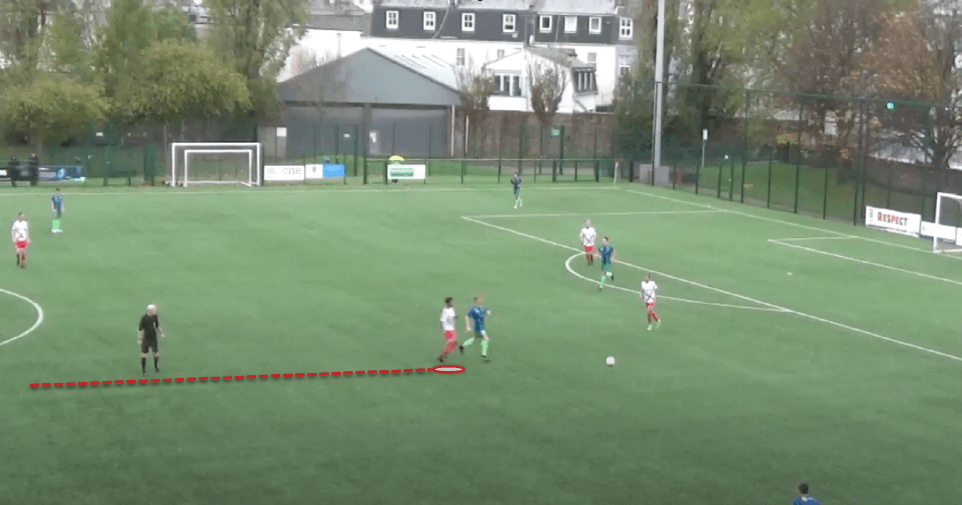 The initial press is normally started from the heart of the team at centre midfield. In the image below, Adam Trotter leaves his position to help double team the opponent. Zeljko Martinovic who is closest to the ball is assisted with Trotter and they force the opponents away from goal. 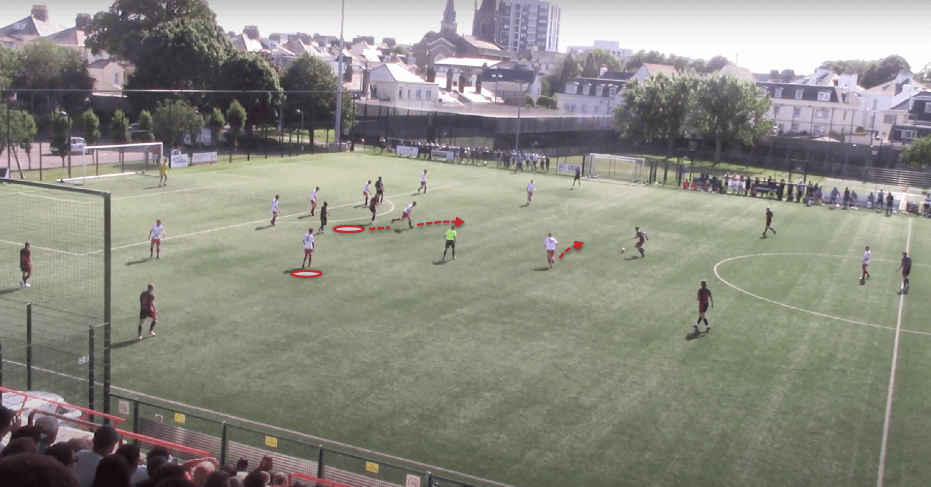 This works effectively because the press from the centre midfielders will only be one of them and the other teammate will hold their position. In the first image, Nafkha pressed whilst Trotter dropped and in the second image the roles reserved and Trotter pressed and Nafkha held the central role.

Once the ball is recovered both the centre midfielders will drop into a deep position to receive the ball. Here The Bulls will play out from the back, essentially starting their attack from the defensive third. In the image below, Van der Vliet who is comfortable on the ball calmly passes the ball out into Trotter and here they can spread the play wide and continue the attack. 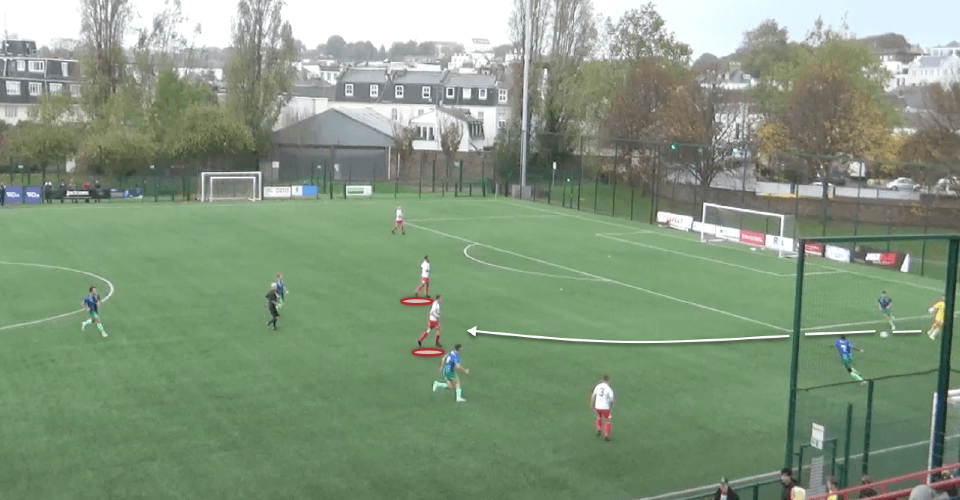 As we highlighted earlier, Hinds will often move in between the lines of the midfielder and defence, this helps transition from defence to attack for The Bulls. In the image below, Hinds has come into the pocket of space to get the ball fed directly into his feet, here he flicks it onto Sol Solomon who makes his run in behind the opponents’ backline. This effective third man run by Solomon stays untracked as the opponent gets drawn into Hinds and this allows Solomon to break free on the wing. 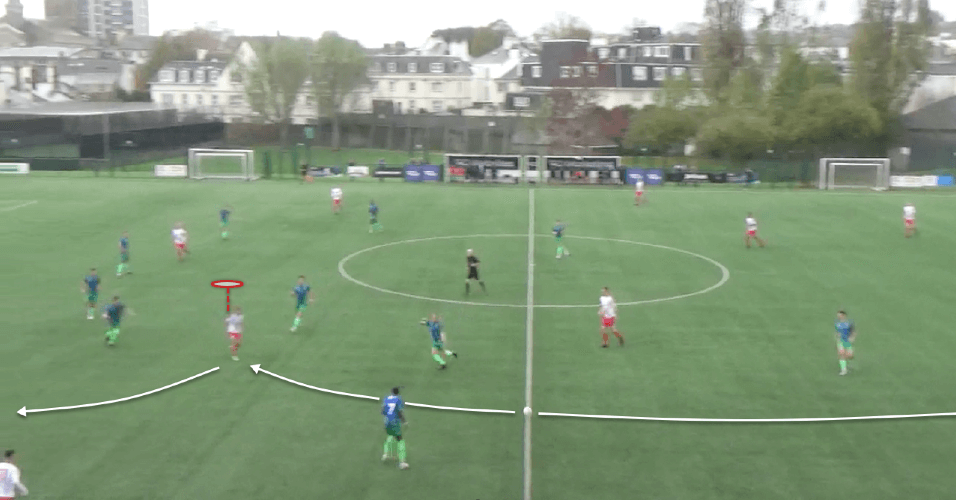 However, The Bulls aren’t limited to one game style. One thing this season shows is their ability to attack early and catch out opponents, they have done this by attempting to take out as many players via one pass. This style is called ‘Packing’ a system designed by Stefan Reinartz and Jens Hegeler. In the image below, we can see Giles play a long ball over the top which takes out ten opposition players with one pass. In this play, they go through on goal and score via the long ball over the top. This saves them playing it sideways and taking no opposition players out of the game and that would be considered to be ineffective if he passed it sideways due to him taking zero players out of the game, whereas, Giles successfully took ten opponents from one pass which is very effective. 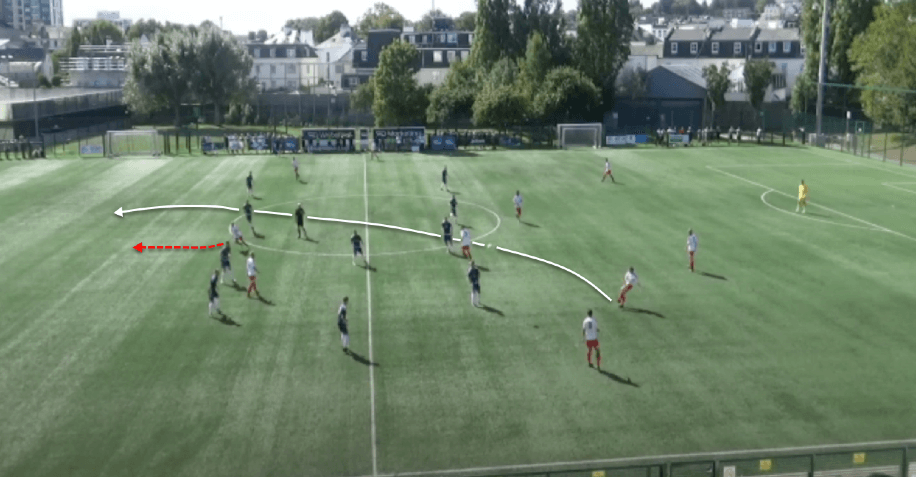 This is a new addition into the tactics but it is mainly implemented for the back four and Van der Vliet as they are in the best position to take the most opponents out of the game with one pass. It needs to be played within reason and realism because it is playing a risker pass but it has higher rewards.

The last part to cover is The Bulls adaptability to game situations. Firstly, when teams sit deep it allows Van der Vliet to step up into a back three and the full-backs to keep the width. Often Van der Vliet will look for the switch onto the wide left flank to Giles but if the long pass isn’t on then he will opt for the short passes and retain possession. In the image below, we can see Van der Vliet is shown high in the back three and both of the full-backs are pushed aline with the midfield. 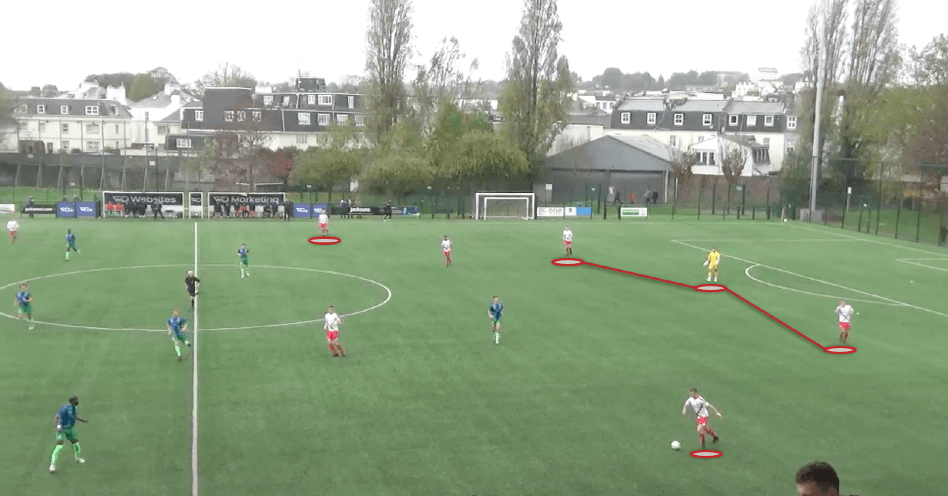 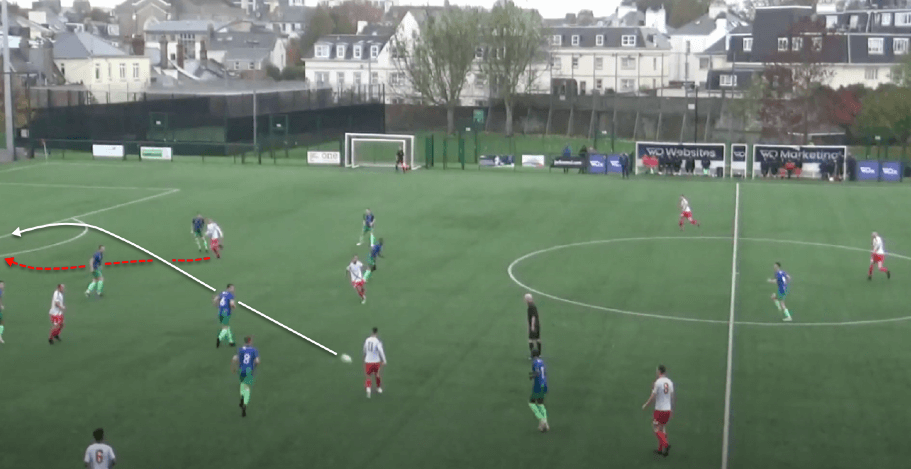 On the other hand, if teams step up and try to press The Bulls then it leaves a gaping gap behind the defence to exploit. In the image below, the opponents have tried to step high and play The Bulls offside, this leaves a massive space in behind between the backline and their goalkeeper and one simple over the top ball is easily played to create a goal-scoring chance. 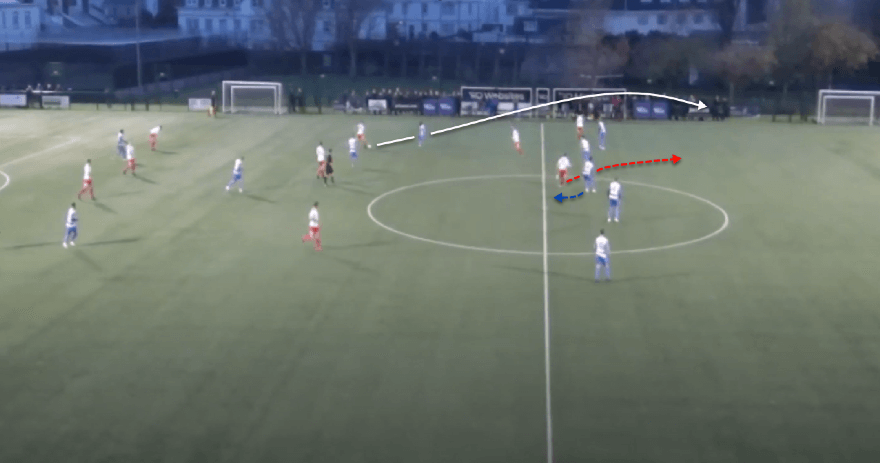 This time the opponents have pressed as a team disjointedly and this leaves a 2v2 for The Bulls attackers, one long ball opens up the opposition and it takes out eight players who are in front of the player in possession. 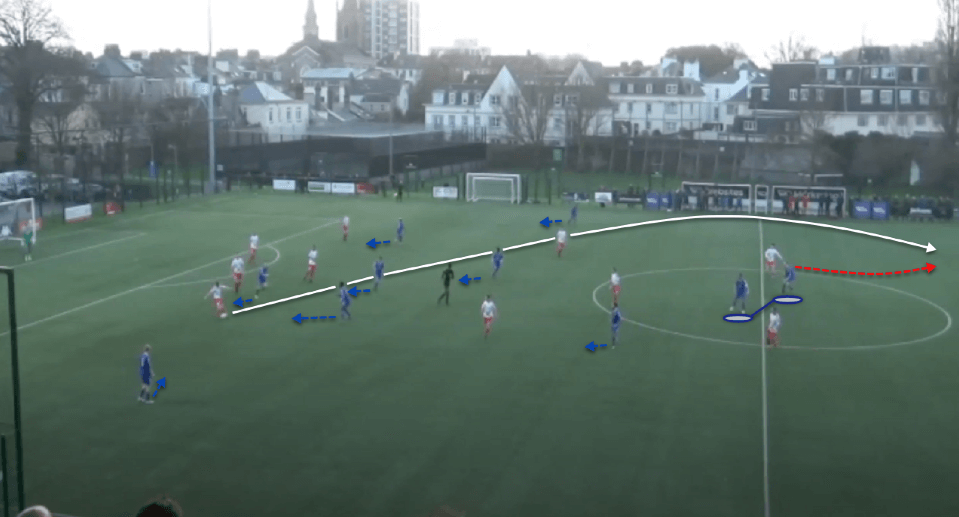 This tactic has been introduced to be positive with the ball even though it is deemed to be a long ball and direct, it is still effective as the player will be able to take out a higher amount of opponents in one pass instead of playing sideways and safe it this doesn’t take any opposition out of the game.

This analysis has shown the first in-depth analysis on The Bulls and their tactics implemented by their manager Freeman. This season has shown us that The Bulls are a level well above this league and they have the capabilities of flying up the English pyramid and gaining on rivals, Guernsey FC and even reaching the English Football League. The Bulls have quality players throughout their squad and this has generated their success, their compactness in defence and their effective attacking abilities in all areas of the pitch have been pivotal. Statistically speaking they have six players who have scored ten plus goals this season. We can conclude that their dominance is due to a few aspects; with their versatility of play-style and their quality of players compared to the leagues standard.