Another season, another Ligue 1 title for Paris Saint-Germain more or less wrapped up by early March. Everyone knew that going into this season, it was all about the Champions League for the French champions, and multiple signings were made in the summer to better their chances of winning the competition, especially after the embarrassing fashion in which they were eliminated by Manchester United last season.

One of these signings was Mauro Icardi, who joined the club on a one-season loan deal. The signing came a bit out of left field, because based on results from previous seasons, it was clear that more strength was needed in midfield and defence. On top of that, PSG are seen as having one of the best attacks in world football, with Neymar, Kylian Mbappe, and Edinson Cavani. When Icardi was announced as a new signing, it was difficult to imagine how Tuchel would fit him into the system with that front three along with players like Ángel Di María, and Julian Draxler who would also be expecting sufficient playing time throughout the season.

Tuchel has always been a coach who has experimented and tried different formations, both at his time at Mainz and at Borussia Dortmund. At PSG, that has not changed. However, with the signing of Icardi, we have seen Tuchel experiment with formations that involve two strikers, and formations that involve one. These different approaches not only affect PSG’s attack, but their midfield and defensive display as well. It seems like Tuchel has experimented with these different formations solely for the reason of figuring out what works best so that he can utilize them in the Champions League. This tactical analysis will explore these options.

Tuchel has lined his side up with two strikers 42% of the time this season. More often than not it is a 4-4-2 shape.

The front four of this formation at its best is Neymar on the left-wing, Di María on the right-wing, and Mbappe up front, alongside Icardi.

Tuchel employs this shape for multiple reasons. The first is so that the space in between PSG’s lines is at a minimum, making it difficult for a team to employ players there, and exploit that space. A 4-4-2 while in defence is great, because it allows for the team to be compact, however, if PSG are in possession and then lose the ball, the gaps in between the defensive line and offensive line make it easy to be exploited by the opposition.

Another reason Tuchel asks his players to employ this 4-2-2-2 shape is simply because it gives the opposition’s midfield more work to do whilst out of possession. It is much easier to defend against a stable bank of four rather than two banks of two, as you constantly have to be aware of what’s going on both in front and behind you.

The two-striker approach in attack

The biggest advantage of having two strikers in attack is how much easier it is to pin back and occupy the opposition’s central defenders, especially if they are playing with two centre-backs (rather than three in a back five). It does not matter which two of Cavani, Icardi or Mbappe are playing. They have the role in essentially playing up against the two centre-backs. This will then allow the two wingers to cut inside, and the opposition’s fullbacks then make one of two choices. The first is that they either follow the two wingers, giving PSG’s fullbacks ample space on the flanks to exploit. The fullbacks will then utilize this space and, if done correctly, the opposition can find themselves in a 4vs6 battle, with the two PSG fullbacks and the four attacking players, who are now in and around the box. 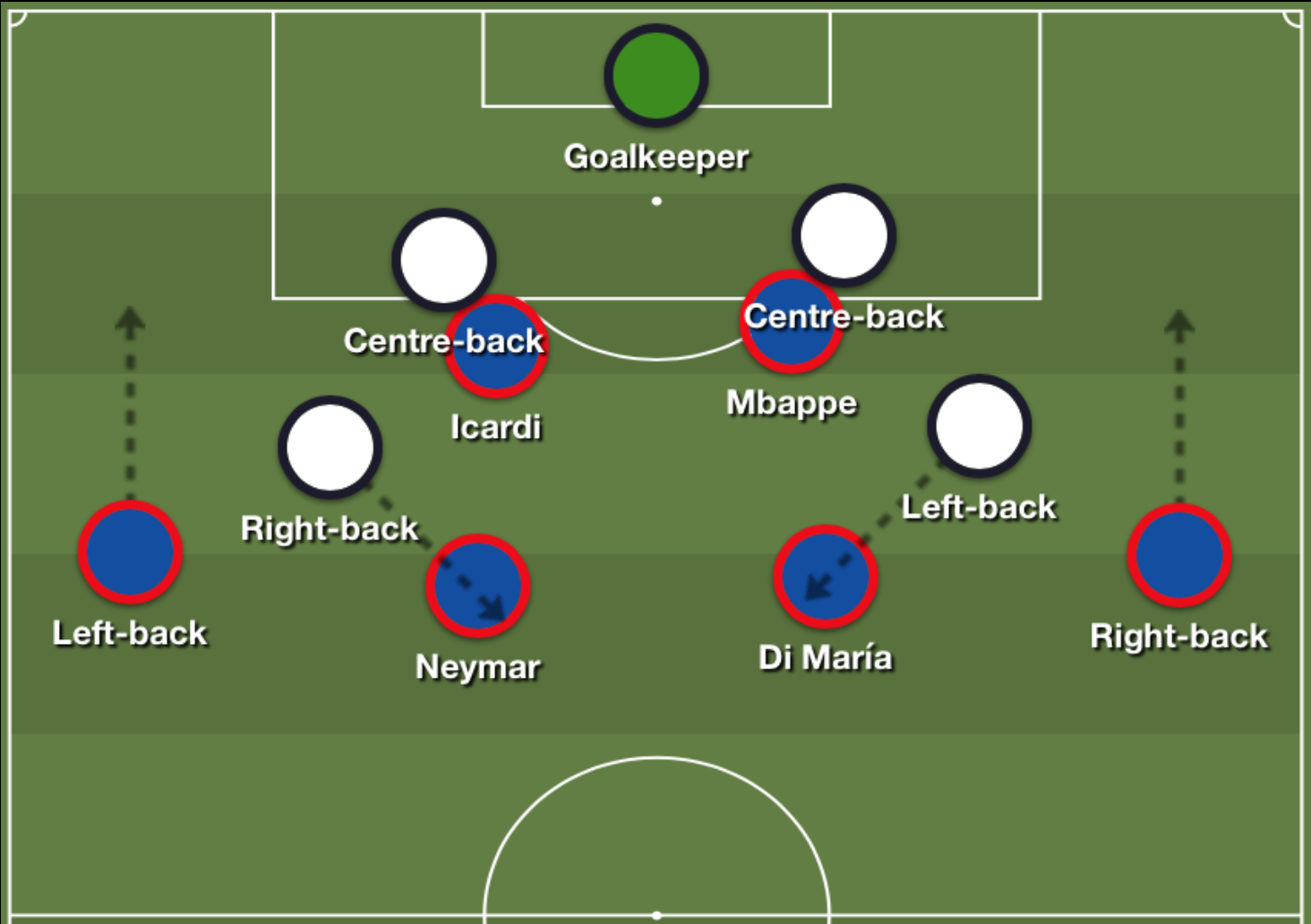 The second choice is that the fullbacks choose not to follow the wingers who cut inside and position themselves narrowly. This then allows PSG’s fullbacks to come and pin the opposition fullbacks, occupying them. The wingers will then use quick interplay and their ability to pick passes to find one of the strikers. 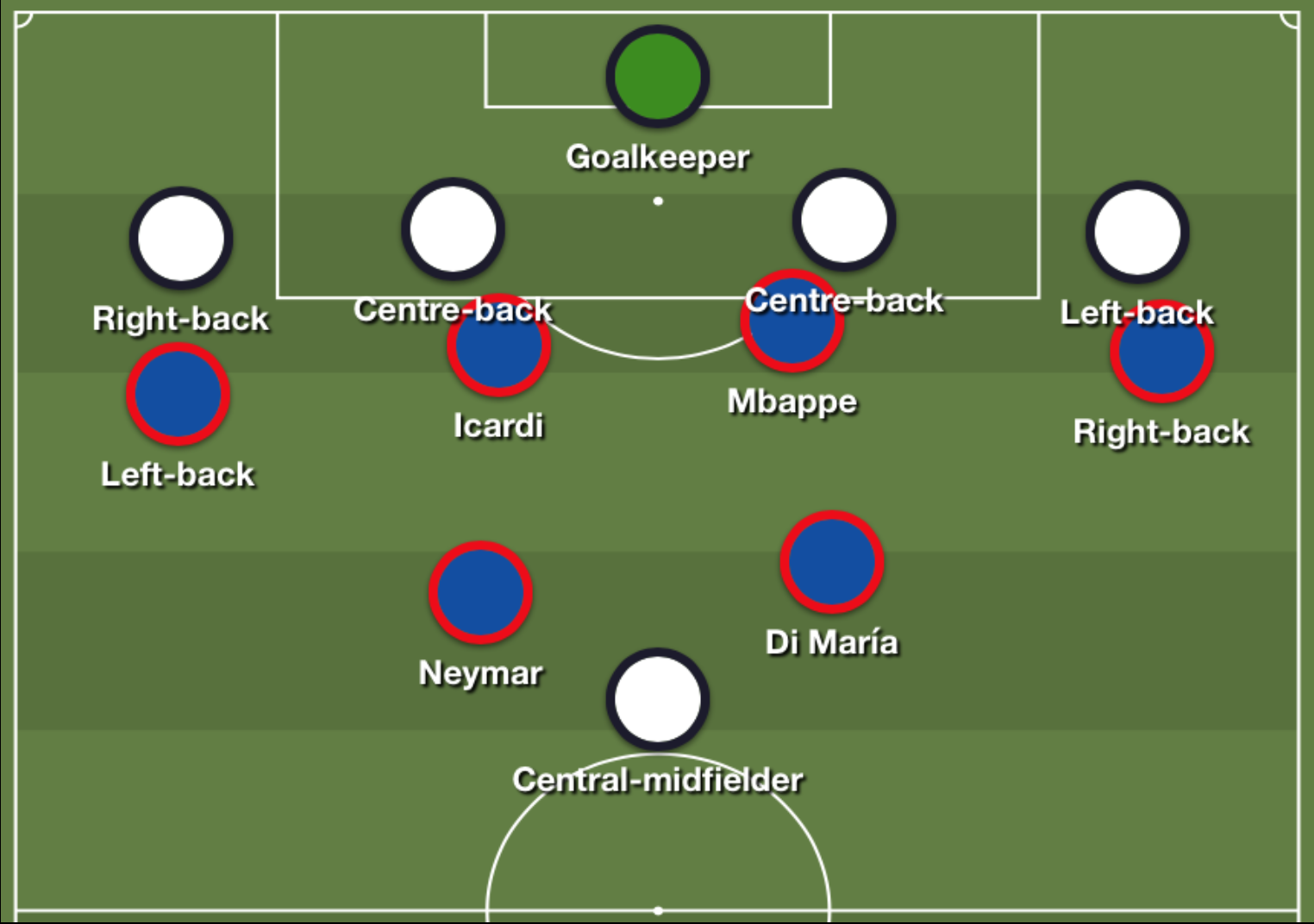 Cavani, Icardi, and Mbappe all have different skills that make them excellent strikers, but one of the things they share in common is their finishing skills. More often than not, regardless of the angle, and the defenders’ position, once they get into the box with the ball at their feet, it’ll likely end up in the back of the net.

The two-striker approach in defence

As mentioned earlier, PSG will remain in a 4-2-2-2 when they lose possession, and deal with offensive danger. Once the transition is complete, and there is less danger, they will fall back into a 4-4-2. Unlike a lot of top teams, PSG are not always pressing to attempt to win the ball back as quickly as possible. Instead, they will slightly shift their 4-4-2 shape higher up the pitch, as a collective, slowly forcing the opposition back into their own half. PSG will then rely on the opposition’s mistakes to counter-attack.

Tuchel has lined his side up with one striker 58% of the time this season. More often than not it is a 4-3-3 shape.

The 4-3-3 sees one striker up top, combined with two more traditional wingers, rather than two strikers and two wingers in attacking midfield roles. The 4-3-3 also sacrifices an attacker for a more complete midfield three, rather than a pivot of two in midfield.

The aggressiveness in the one-striker approach

PSG are often much more aggressive when playing a 4-3-3. A 4-3-3 almost always guarantees very strong attacking play from the start. PSG already almost always dominate possession when playing, and the 4-3-3 takes that up to another level. By having control in midfield, they can go full throttle in attack and essentially overwhelm the opposition rather than focus on forcing the opposition into areas and dragging them out of position. That combined with the large amount of possession PSG have, almost guarantees plenty of goal scoring opportunities.

PSG are much more willing to press while in this formation, their passes allowed per defensive action (PPDA) is significantly lower whilst in a 4-3-3 shape, rather than a 4-4-2. The PPDA is calculated by dividing the number of passes the team allows by the opposition in their own half by the number of defensive actions taken (interceptions, attempted tackles and fouls). The average PPDA in their 4-3-3 shape is 8.06, whilst in a 4-4-2 it jumps up to 15.10. When out of possession, PSG will automatically attempt to win the ball back, as quickly as possible.

Playing out from the back in the one-striker approach

PSG also tend to play out from the back more when playing a 4-3-3. The capabilities of both the fullbacks and the wingers allow for very smooth transitions from deep into PSG’s own half to the opposition’s half. The centre-backs will combine with the fullbacks, as they slowly move up the pitch. Once space is found, the ball will go to the midfield or out wide to the wingers. If it is the first option, then the midfield will use their passing abilities to attempt to find the front three. Usually, it is Veratti spraying long passes forward, he completes 86% of his long, forward passes.

The second option will often see Mbappe receive the ball, who then uses his speed to bypass his man. Defenders often get so close to Mbappe, which is often a mistake, as he can so easily feint, turn, and outrun them. From there, it is just a matter of getting the ball into the right player’s feet, to create a goal-scoring opportunity.

One of Paris Saint-Germain’s biggest matches of the season came mid-February: the first leg against Borussia Dortmund, Tuchel’s old club, in the Round of 16 in the Champions League. Any Champions League match is important, especially the knockout rounds that come after the group stages, but there was definitely added pressure on PSG. The French Champions have struggled a lot when it comes to this competition and are known for crashing out in spectacular fashion, either by losing a marginal lead from the first leg, losing against a much weaker team or both. Coming into this tie, PSG were seen as favourites because of their domination in their own league, Dortmund’s inconsistent form as of late and the fact that PSG are just seen to have better players overall. However, none of that seemed to matter, as Dortmund were able to beat PSG 2-1. And while a one-goal deficit is not a bad result to take back to the Parc des Princes, knowing PSG’s history in this competition, it is nerve-racking for them.

Tuchel decided to line his side up in a 3-4-3 formation. A system he has only used in 3% of Paris’s matches this season, so far. The 3-4-3 is essentially a combination of the 4-4-2, and the 4-3-3 discussed above. The three attackers are present, but so is the midfield bank of four. It seemed like Tuchel wanted to combine the strengths of both elements. The analysis shows that it did not work. Why? It was clear the players were not 100% used to the old system and kept going back to old habits.

As mentioned earlier, the 4-4-2 system often changes to the 4-2-2-2 because of the two wide players tucking in. This play cannot work then there is a bank of four behind the two players tucking in – the pitch becomes too congested. However, Neymar and Di María kept doing it, and as a result, all of PSG’s players were way too compact and narrow.

This made it incredibly easy for Dortmund to defend against these tactics, as essentially, PSG were just getting in each other’s way. They could not maintain possession in the final third, because the ball either kept easily being cleared away by a Dortmund player or would awkwardly bounce of the PSG teammates.

Tuchel needs to turn this around in the second leg by playing either the 4-4-2 or the 4-3-3. Tried and trusted will be the way to go for this match, as Paris Saint Germain cannot afford to be knocked out this early in the competition again.