2019 saw many young footballers break through and come into the spotlight, but one name truly shone brighter than the rest. Erling Braut Haaland burst into the limelight this year like nobody else has in a long time, and with good reason. He first came to widespread attention earlier this year at the 2019 FIFA U-20 World Cup, where he scored nine goals in Norway U20’s 12-0 win over Honduras.

Yes, you read that right, if you did not know it already – Haaland scored nine goals in one match. Haaland also came under greater scrutiny due to his surname – he is the son of former Nottingham Forest, Leeds United and Manchester City defender Alf-Inge Haaland; the same player whom Roy Keane had infamously tackled viciously in a Manchester derby as supposed retribution for comments made by the Norwegian to him a few years prior to the incident.

The younger Haaland is a striker, though, and his goalscoring exploits for Red Bull Salzburg have been extraordinary this season. At the time of writing, he has 28 goals from 22 appearances in all competitions, including becoming the first teenager to score in five consecutive games in the Champions League.

He has also made his debut for the Norwegian senior team this season, and has been linked to almost every big football club across Europe. The most recent speculation suggests that a January move to either Borussia Dortmund or RB Leipzig is on the cards, while Manchester United have also been strongly mentioned as a potential destination for the 19-year-old.

One thing is certain; he is not going to remain at Salzburg beyond the end of this season, at the latest, and this analysis will look at why he is definitely one of the players to watch in 2020.

What strikes you immediately when you watch Haaland for the first time is his size – he is 6’4” already, at the age of 19. One would expect him to add some bulk to his frame as he grows older, but he is already quite imposing physically. The tendency would be for such a player to be used as an aerial threat, with long balls played towards him so that he could use his height and physical attributes to win headers and hold the ball up for his team. However, Haaland actually prefers passes in behind the defensive line for him to chase – he is deceptively fast, and this fits in perfectly with how Jesse Marsch sets up his Salzburg side to play with quick, direct attacks. While he is good in the air as well – he has a success rate of 41% for aerial duels this season – his primary weapon is his pace and movement to get in behind defenders. 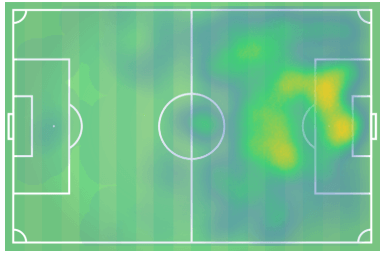 His heat map from Wyscout for this season

His heat map is more or less what one would expect from a striker – most of his work is done in the penalty area, but a significant amount of it is outside as well, with the map showing that he likes drifting out to the left flank. This shows Haaland’s adaptability and intelligence, as the youngster moves out to the flank quite often in search of space before making a run into the box from out wide. This is also due to the system used by Marsch at Salzburg – they have usually played in a 4-2-2-2, which means that Haaland has played as part of a strike duo. This gives him the freedom to go out to the flank as the left-sided striker, especially when the attacking midfielder comes inside.

One of Haaland’s best attributes is his movement off the ball. He is constantly on the move looking for space, and usually tries to make runs off the shoulder of the last defender to go through on goal. Allied with his pace, this makes him a fearsome proposition for opposition defenders. 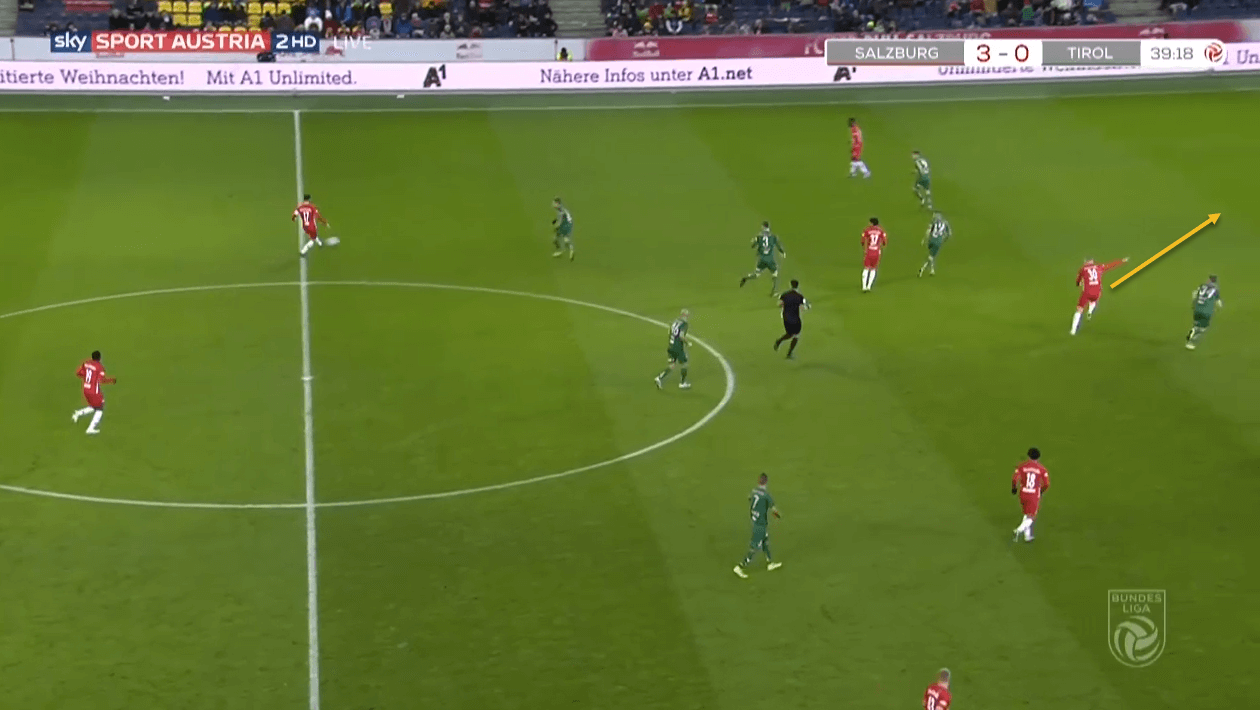 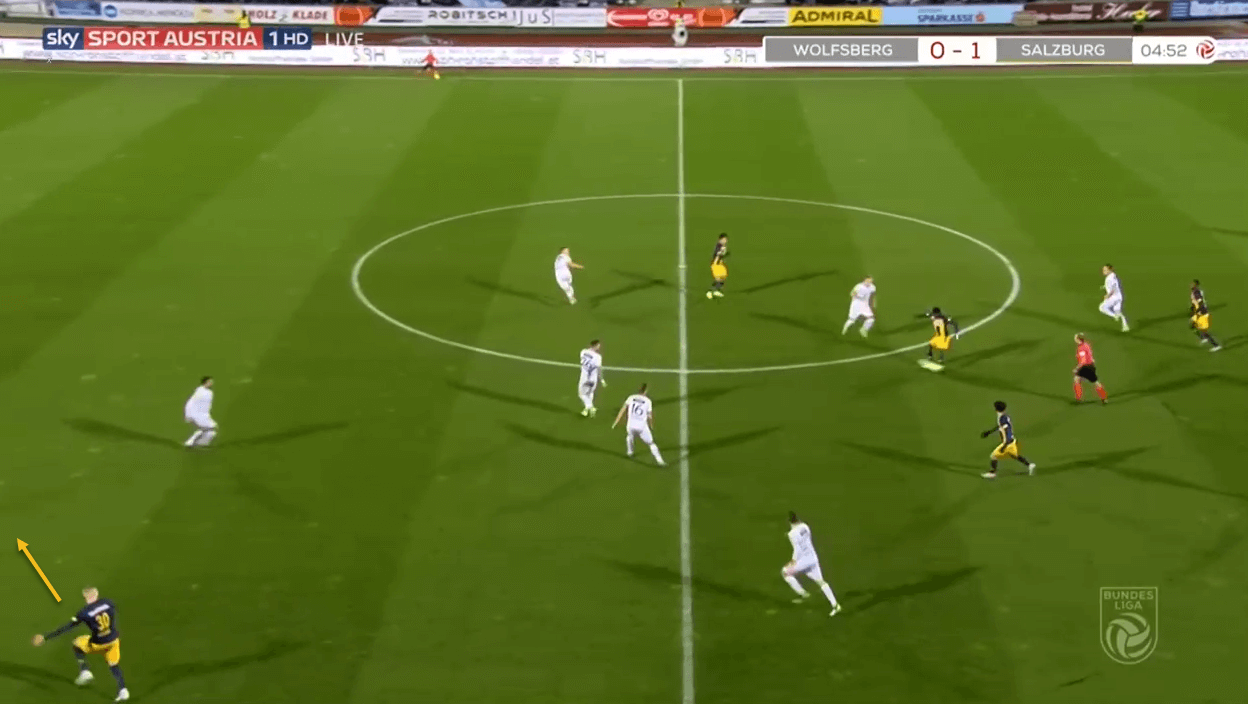 As the images show, Haaland usually sets off on a run behind the opposition as soon as possible to try and create the opportunity for a long pass to be played to him. Failing that, his movement does force the defence back and creates space for his fellow attackers. However, that is not the only string in his bow – 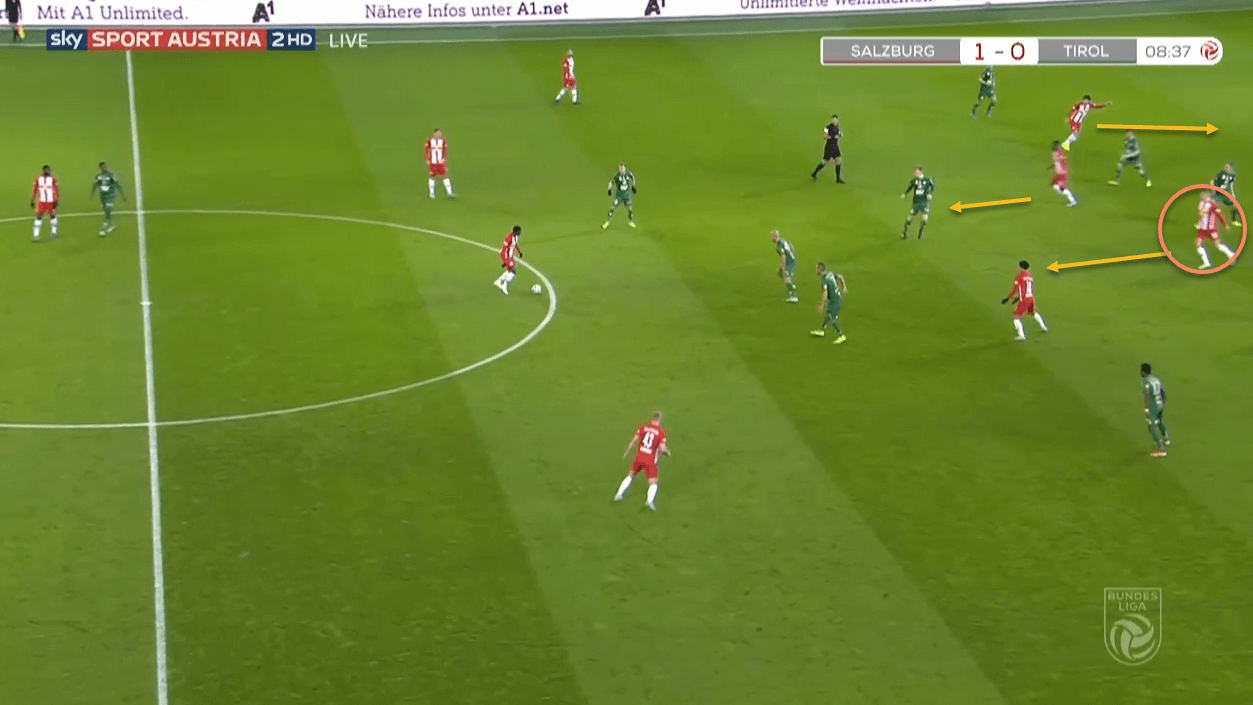 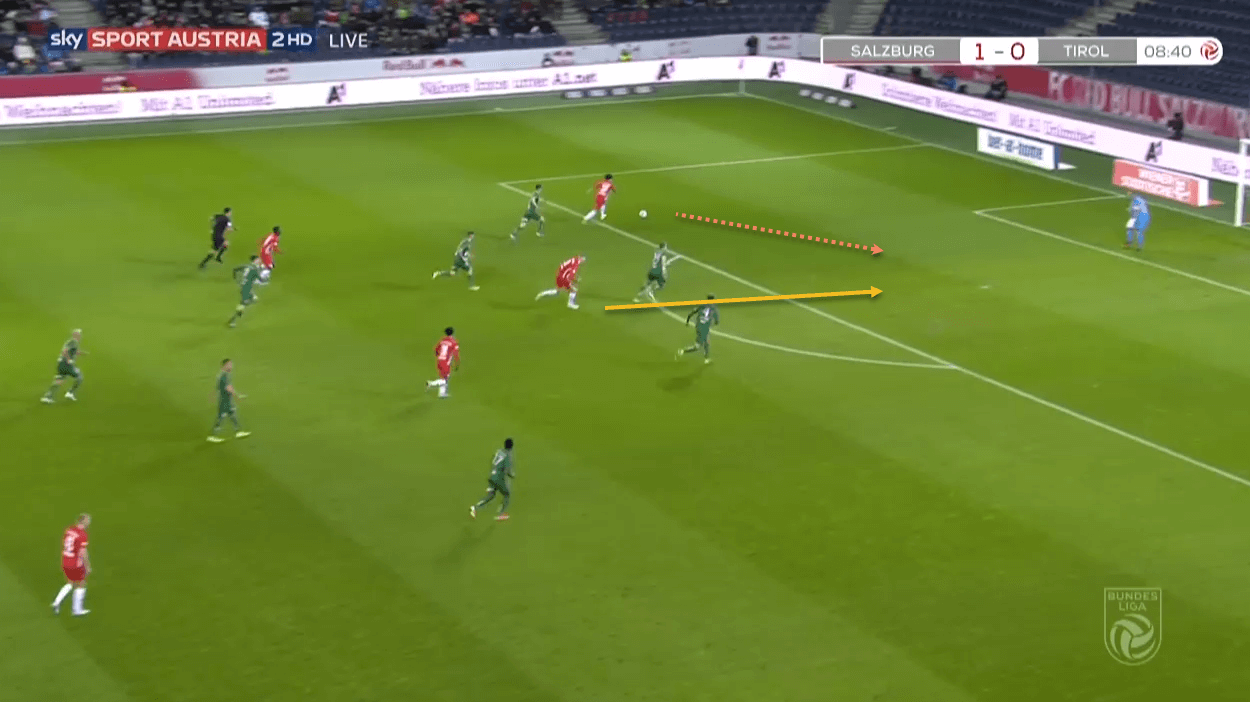 …who then squares the ball for the Norwegian to score from 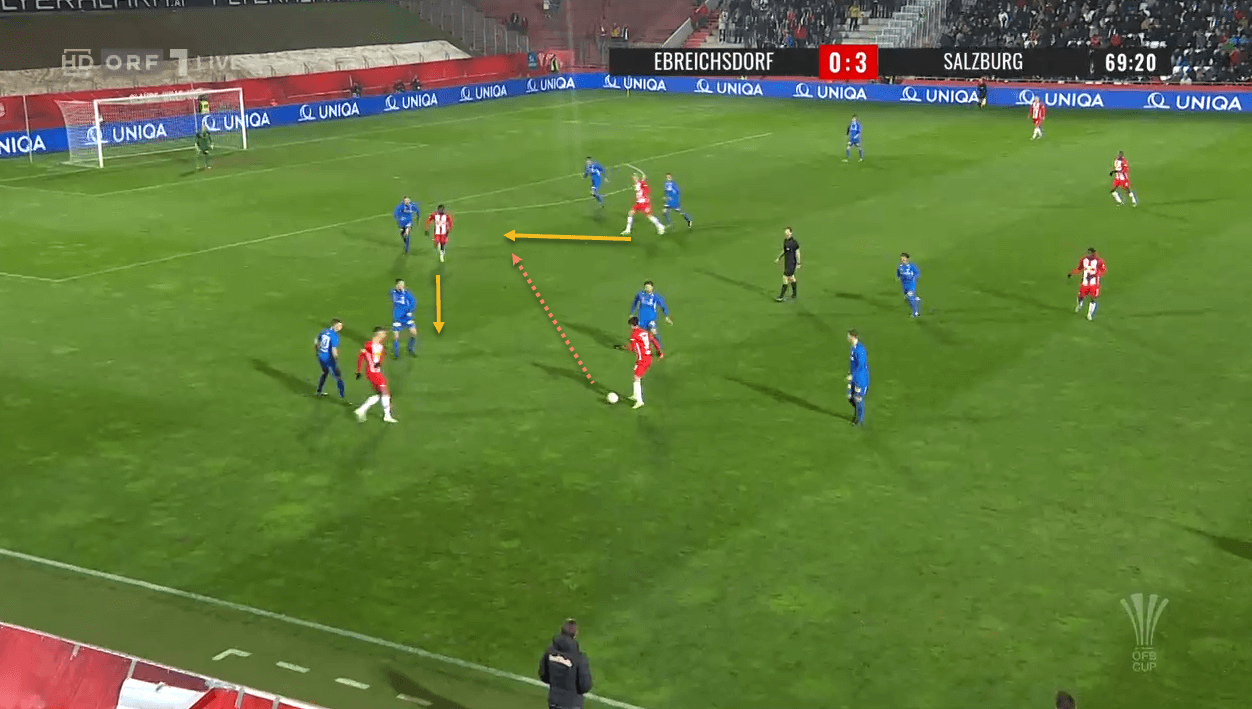 Here, Haaland is quick to move into the space created by his strike partner’s movement towards the flank, thus giving his teammate the chance to play him through on goal

As seen in the examples above, the Norwegian is capable of being more subtle with his movement and positioning as well to create space for his teammates. Salzburg’s twin striker system means that his movement is often geared towards dragging markers away to open up space for his strike partner or other teammates to move into.

Allied to his movement is his creativity – both on and off the ball. In addition to having scored 28 goals so far this season, the Norwegian also has five assists, pointing to his ability to fashion chances for his teammates. 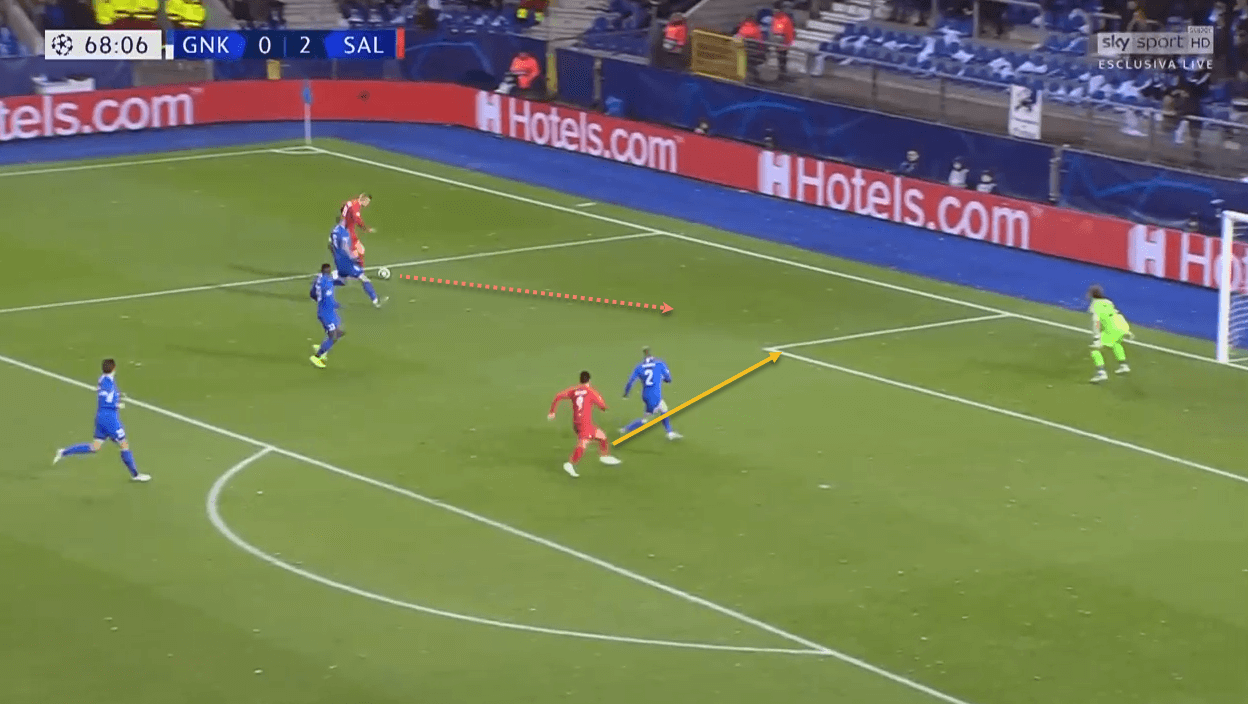 Haaland crossing the ball for Hwang Hee-chan to score, having gone out to the left flank

Haaland’s movement helps him create chances for his teammates, as defenders are drawn towards the Norwegian which opens up space – 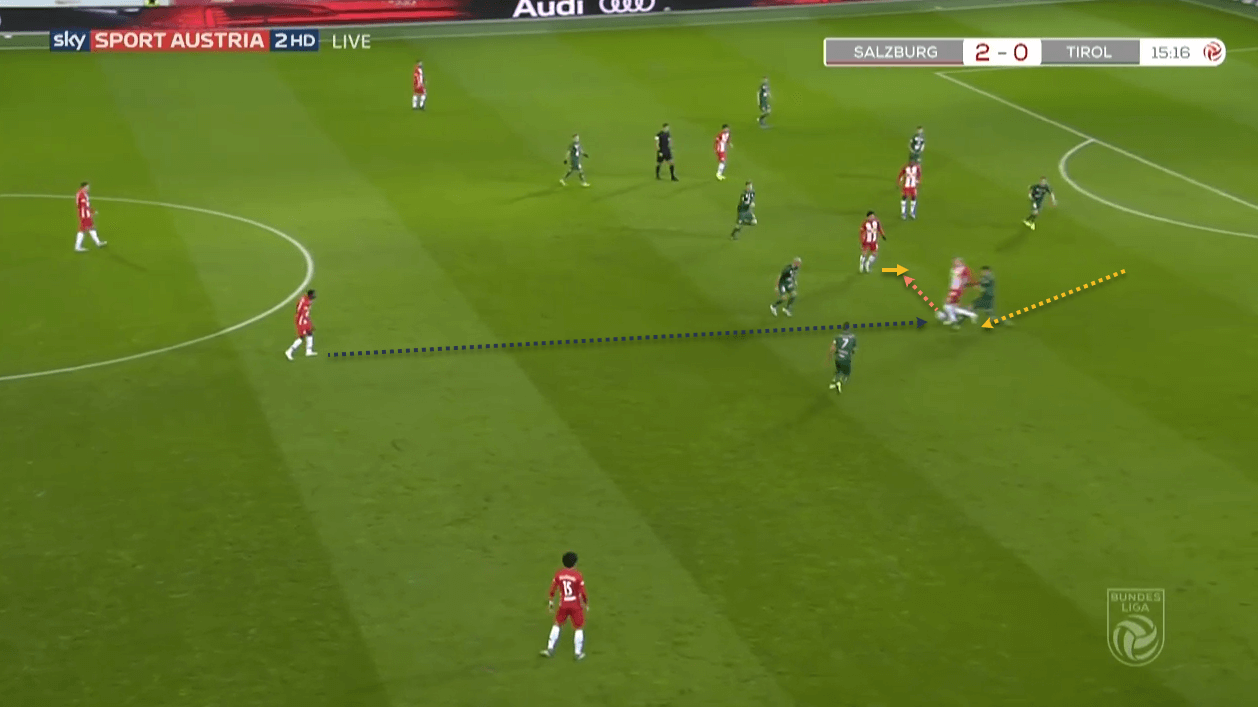 Here, Haaland receives the ball having come short, which has dragged a defender out of position, and he plays a first-time flick to Hwang which puts the Korean through on goal

His passing statistics are extremely average – he has a success rate of 66.7% – which is largely due to the nature of his passes. Most of them are first-time flicks or layoffs like the example seen earlier, as teammates play the ball quickly to him. Such passes are much more likely to be intercepted or to go wrong, but Haaland’s role in Salzburg’s setup allows him to get away with this. Furthermore, when he does have the time to pick out a pass, he usually does find his intended target – 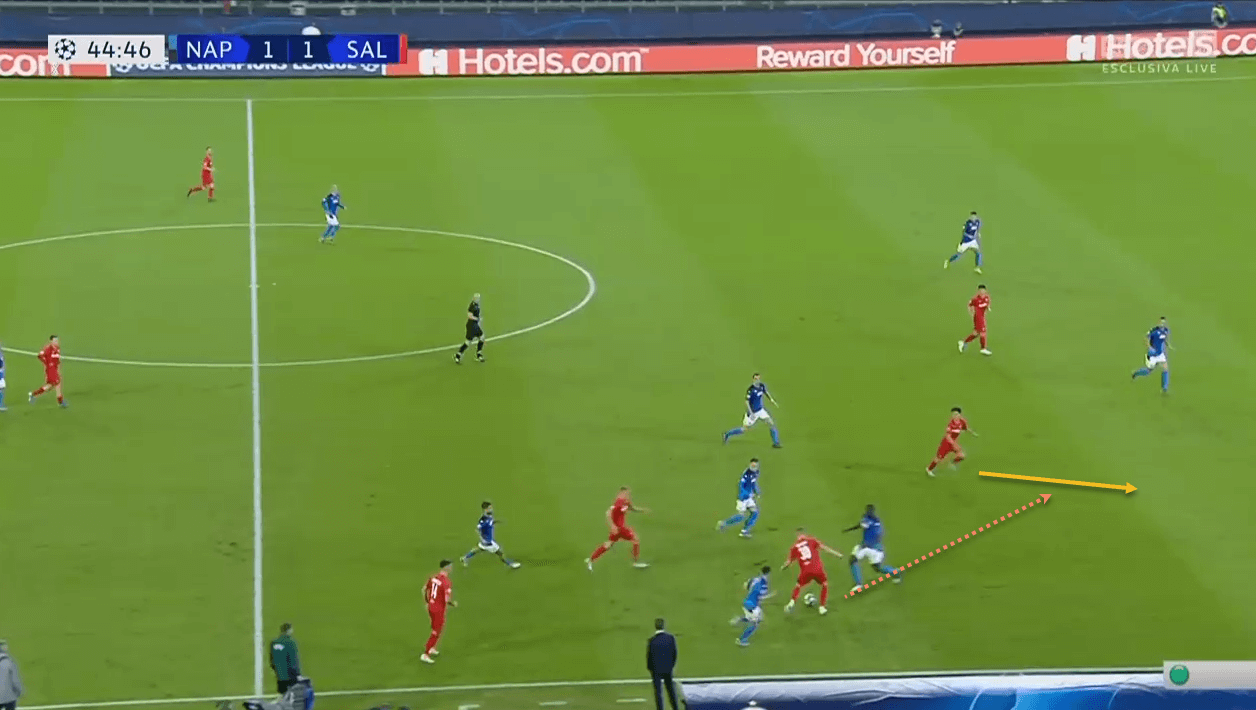 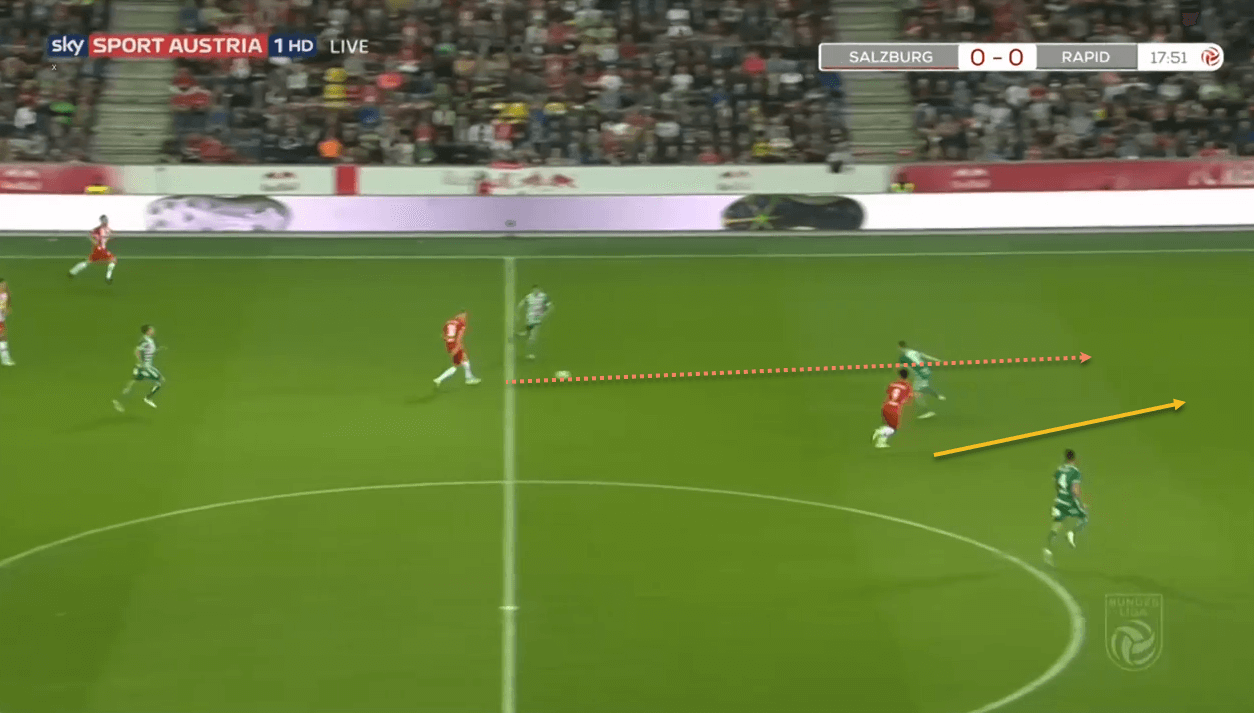 On the counter-attack, Haaland is able to play a through-ball for Hwang

This is undoubtedly Haaland’s strongest suit. The numbers make the case themselves – as stated earlier, he has 28 goals from just 22 appearances so far this season. These have come at an astounding rate of 1.55 goals per 90 minutes, and from just 37 shots on target. Haaland has taken 73 shots in total this season, meaning that he has been on target with almost 51% of those shots, and giving him a stunning conversion rate of 34.25%. All of these numbers should be enough to underline his supreme finishing ability, as is also borne out by the fact that his xG total for the season so far is at 17.5. That is an incredible outperformance, and while one would expect a reversion to the mean, it also illustrates how good he is in the box. Another statistic will further help make this point – the Norwegian only makes about 6.8 touches of the ball in the box per 90 minutes – which demonstrates his efficiency and ruthlessness in front of goal. Haaland is only 19, but is already one of the best finishers in Europe, certainly in his age group.

Erling Haaland has quickly become one of the most sought-after players in Europe this season, with all of Europe’s elite clamouring for his services. As mentioned previously, Borussia Dortmund and RB Leipzig are thought to be the frontrunners for a January transfer, while Manchester United have also been mentioned as having a strong chance of landing the Norwegian wonderkid.

His attributes and style of play would lend themselves well to Julian Nagelsmann’s Leipzig side – they too play with a similar 4-2-2-2 shape, and of course are part of the Red Bull footballing group, making a transfer quite likely. Dortmund, on the other hand, are crying out for some attacking reinforcements, especially as backup for Paco Alcácer, and Haaland would fit in well here too, with Die Schwarzgelben’s fast, attacking tactics suiting him.

Finally, were he to move to Old Trafford, he would find himself shouldering the goalscoring burden alongside another prodigious talent in Marcus Rashford, while Ole Gunnar Solskjær’s side have also done well when employing a fast, counter-attacking brand of football. Any of these potential moves could work out well for Haaland, but it is almost certain that he will be one to keep an eye out for in 2020, irrespective of where he ends up. 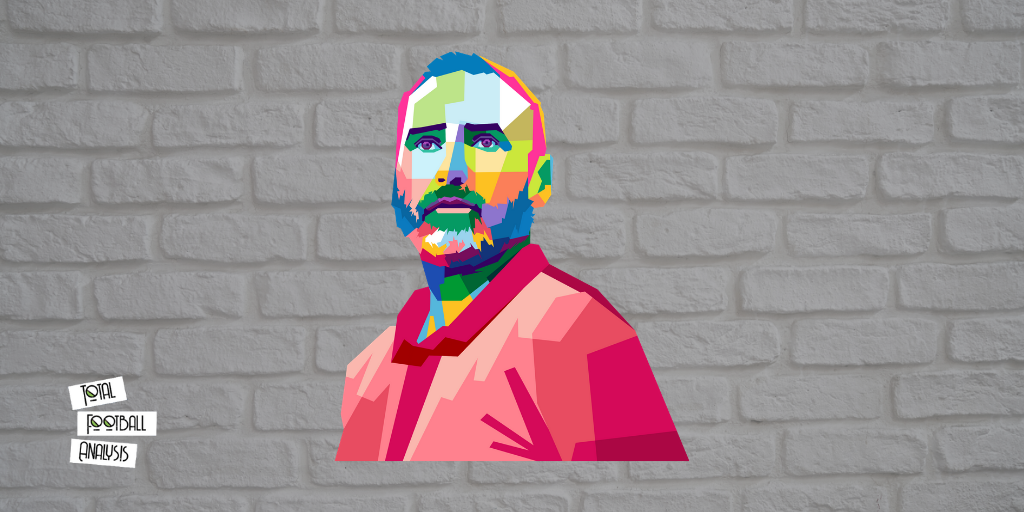 Tim Walter caught global attention last year during his time in charge of 2. Bundesliga side Holstein Kiel, where he […]