At the age of 20 we are seeing the French forward Georges Mikautadze enjoy something of a breakout season in the Belgian second tier. Indeed, after joining RFC Seraing on loan for the 2020/21 season the young forward, born in France but of Georgian descent, made quite the impact on his debut as he scored four goals to lead his side to a 5-3 win over Lommel United. Since then the young forward has barely looked back. He has, however, enjoyed something of a circuitous route to reach this point.

He was initially a part of the youth-system at the prolific Lyon academy before leaving before getting anywhere close to the first-team setup. He spent a year on the lower tiers of French football with AS Saint-Priest before moving back to a well established academy to join Metz, a club with a fantastic reputation for youth development.

He typically plays as a forward and prefers to start in central areas although at a reported 5’9” he does not profile as a typical target striker. With that said, however, Mikautadze has already shown signs of an ability to receive the ball with his back to goal where he poses a very specific problem for opposition defenders. He has the ability to take contact from behind and is press resistant, this means that if the defender comes too close they will find themselves rolled and outplayed by the young forward. If, however, they sit off and allow him to receive in space then he can turn and drive at the opposition defensive line at will. He is in essence an extremely mobile forward player who can drift across the width of the pitch to take advantage of weak points in the opposition defensive structure. Indeed, it is no surprise that he has been so effective so far this season. At the time of writing he has played 1364 minutes with 1.06 goals per 90 minutes from 5.08 shots per 90 and 7.59 attempted dribbles per 90. In short, Mikautadze is a genuine attacking threat.

In fitting with his profile as a mobile forward Mikautadze displays excellent movement in a variety of situations. He is capable of creating separation from defensive players despite not having top level pace. Instead he uses movement and positioning on the blind side of opposition defenders to create pockets of space in which he can receive the ball.

It is interesting to note how often Mikautadze finds himself positioned horizontally between opposition defenders. He seeks out these opportunities and attacks space extremely well. 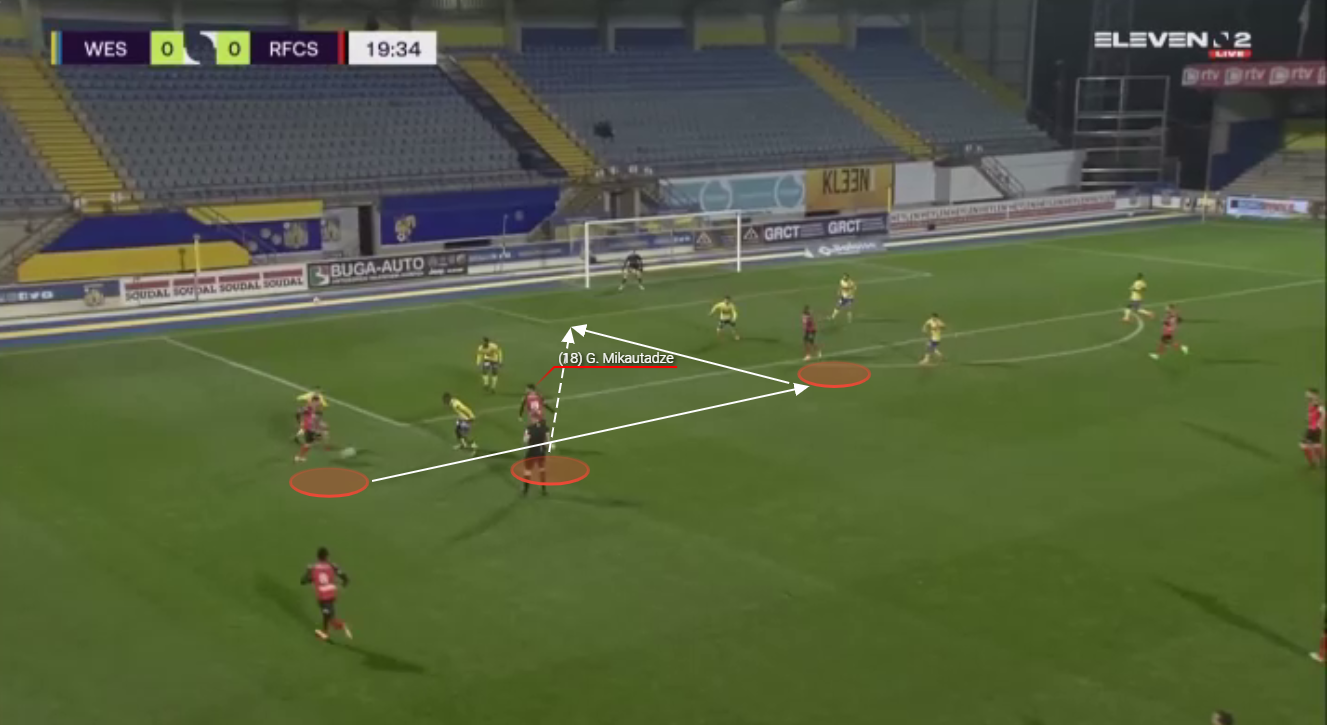 The player who receives the initial pass across the area is then able to play a simple first time pass to find this run and Mikautadze finds himself bursting into the penalty area at an excellent angle to produce a chance on goal. 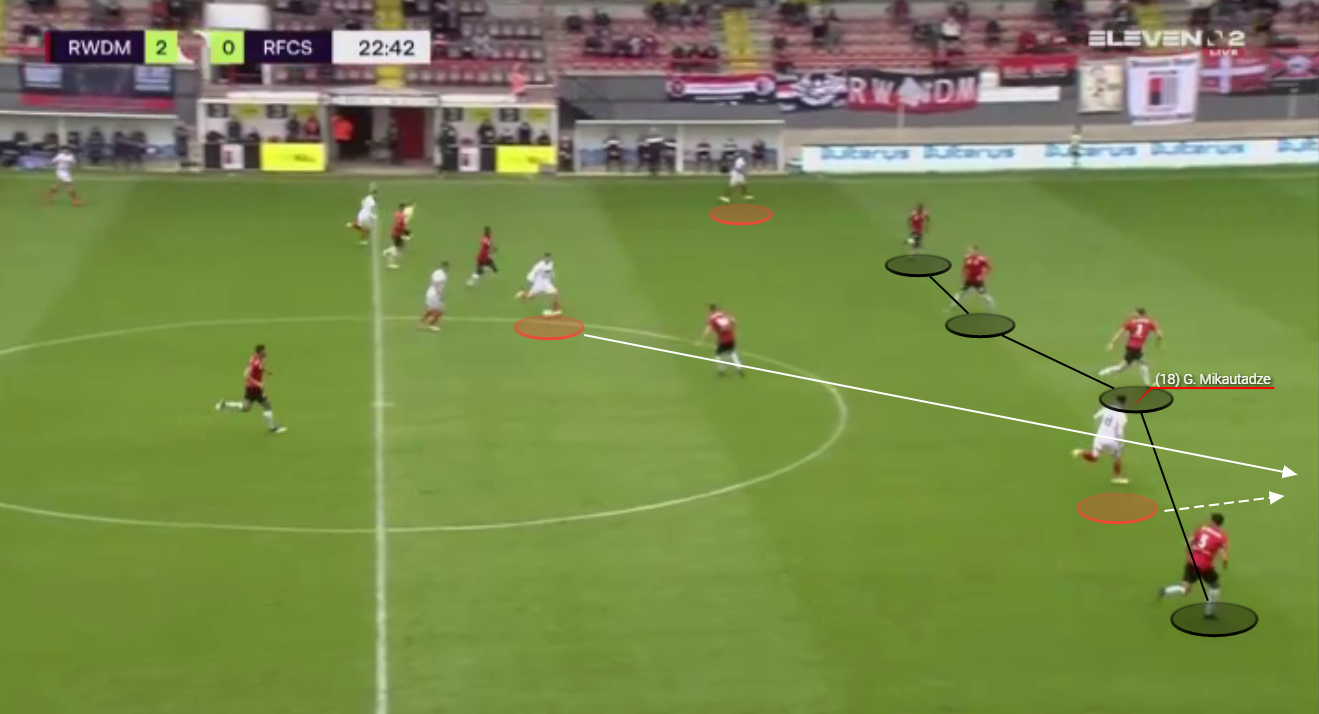 This time we see the movement and positioning that was discussed earlier on in this article as Mikautadze finds himself making a run into the gap between two opposition players and towards the opposition penalty area.

The young forward is able to drift intelligently into areas of the pitch in which he can have the maximum effect. This is clear in this example as the positioning of the forward provides an excellent angle for the through ball to be played in and behind the defensive line of the opposition.

Mikautadze is then able to collect possession of the ball while moving at momentum to break towards the penalty area. 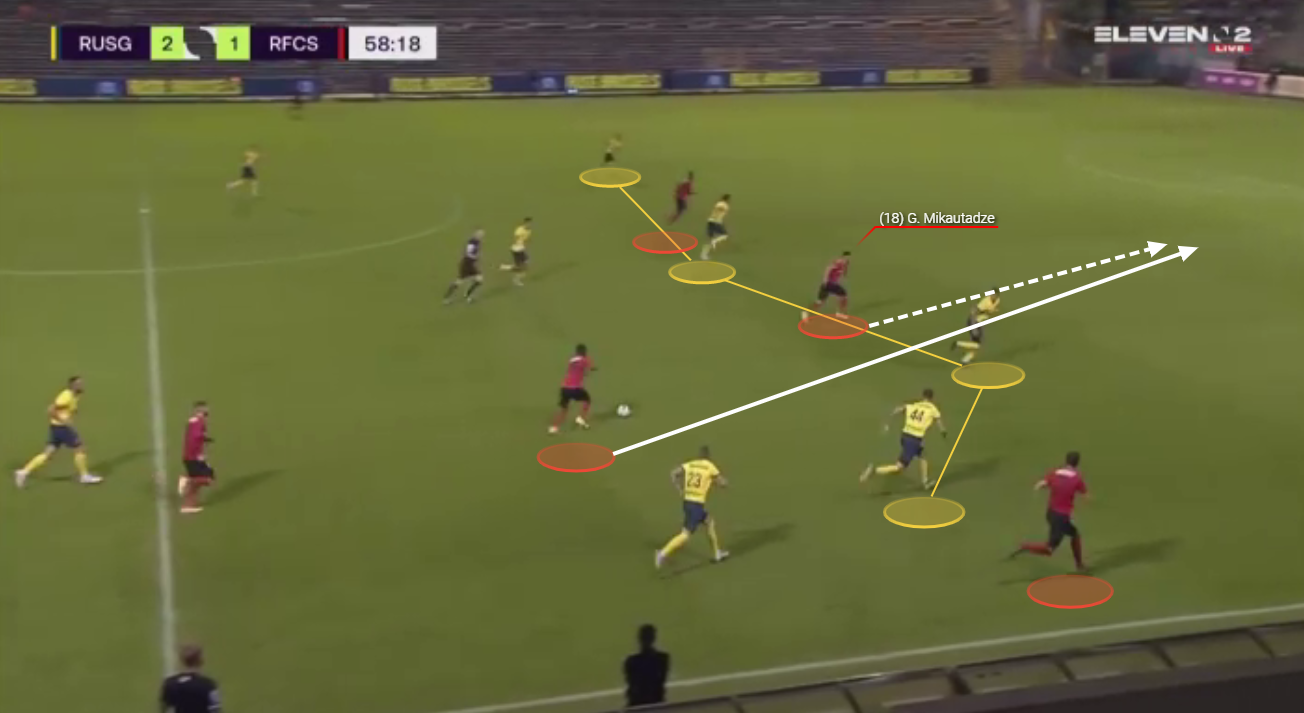 A similar situation here as Mikuatadze finds himself in a strong position between the two central defenders of the opposition.

Once again the midfielder then has an angle to play a simple through pass that accesses the run of the French forward. Time and time again we can see Mikautadze making these runs and positioning himself intelligently to help his team to progress the ball into the final third of the opposition and then, in turn, to push forwards into the penalty area.

Georges Mikautadze is a player with excellent balance and agility. He has the capacity to quickly change direction while moving at pace or to receive the ball when static before then starting to move in a variety of directions to take advantage of any poor positioning from his direct defenders.

His first-touch is generally excellent and when he takes possession he has the capacity to then outplay his opponent through speed and intelligent movement. 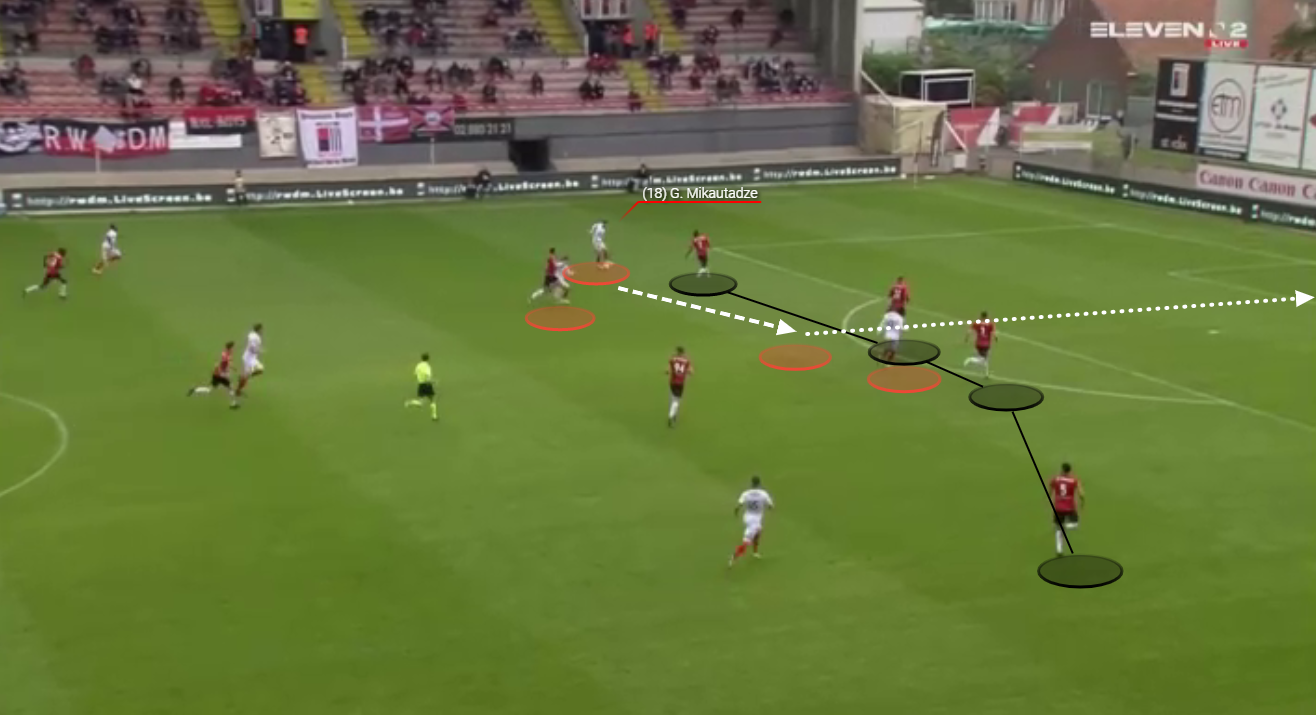 In this example we see a situation in which Mikautadze uses his balance and his ability to quickly change direction. He receives the ball on the far corner of the penalty area and is able to turn to face the opposition goal.

As a defensive player moves to engage him and apply pressure then we see Mikautadze simply shift to the left before dropping his right shoulder and attacking inside past the defender. As he moves across goal he gains the space to shoot low and with power into the near corner of the net.

The initial movement is what made the opportunity. 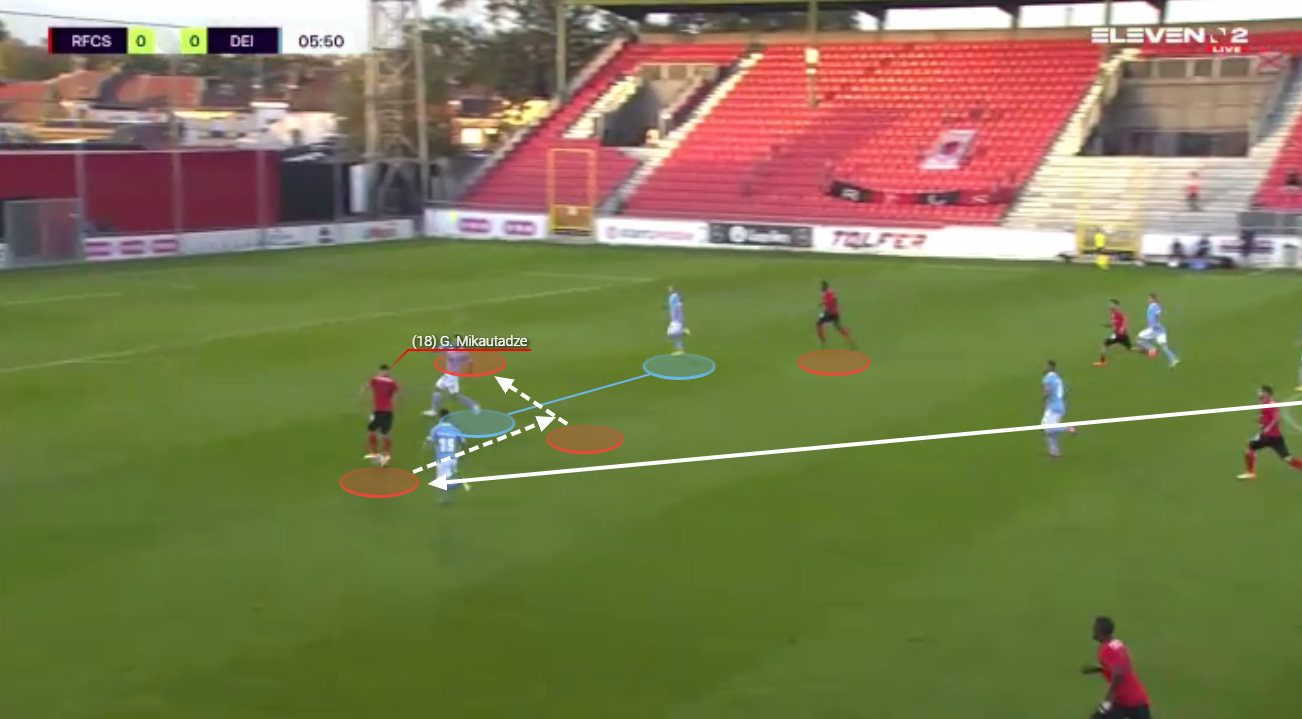 A similar situation here as Mikautadze this time collects possession of the ball just inside the final third. The opposition has not yet set their defensive organisation and when the young striker takes possession the immediate defender has to shift across to try to close down the space and not let Mikautadze have a clear run at goal.

The young French striker takes possession but uses the momentum of the opposition player against him. As the defender moves across Mikautadze displays his quick feet in shifting the ball inside, in the first instance, and then forward towards goal. 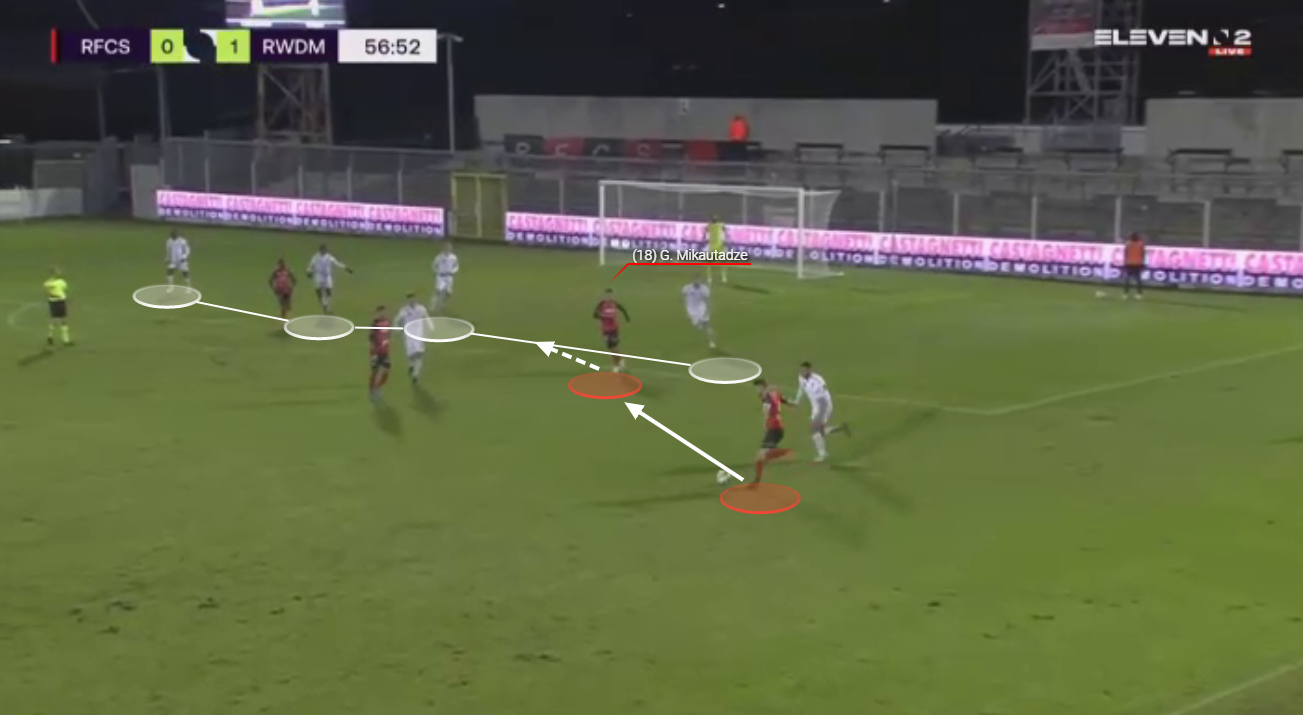 This time we see a situation when Mikautadze receives the ball with his back to goal. The opposition are well set and Mikautadze has moved just off of the defenders in order to give himself a cushion with which to receive the ball.

As the player in the wide area makes the pass to find the feet of the French forward we see him take a touch and then shield the ball as the defender immediately behind him applies pressure to try to regain the ball. As the defender gets too close we see Mikautadze pin him by leaning back before rolling around and creating an opportunity to strike at goal.

In keeping with his profile as a striker who uses movement and intelligent positioning in order to help his team progress the ball into dangerous areas we also see Mikautadze using his passing range and vision to play his teammates through into dangerous areas.

The young striker is comfortable dropping deeper towards his own half in order to receive the ball and then when he turns he has the vision and range of passing to access runs that are made by his teammates. 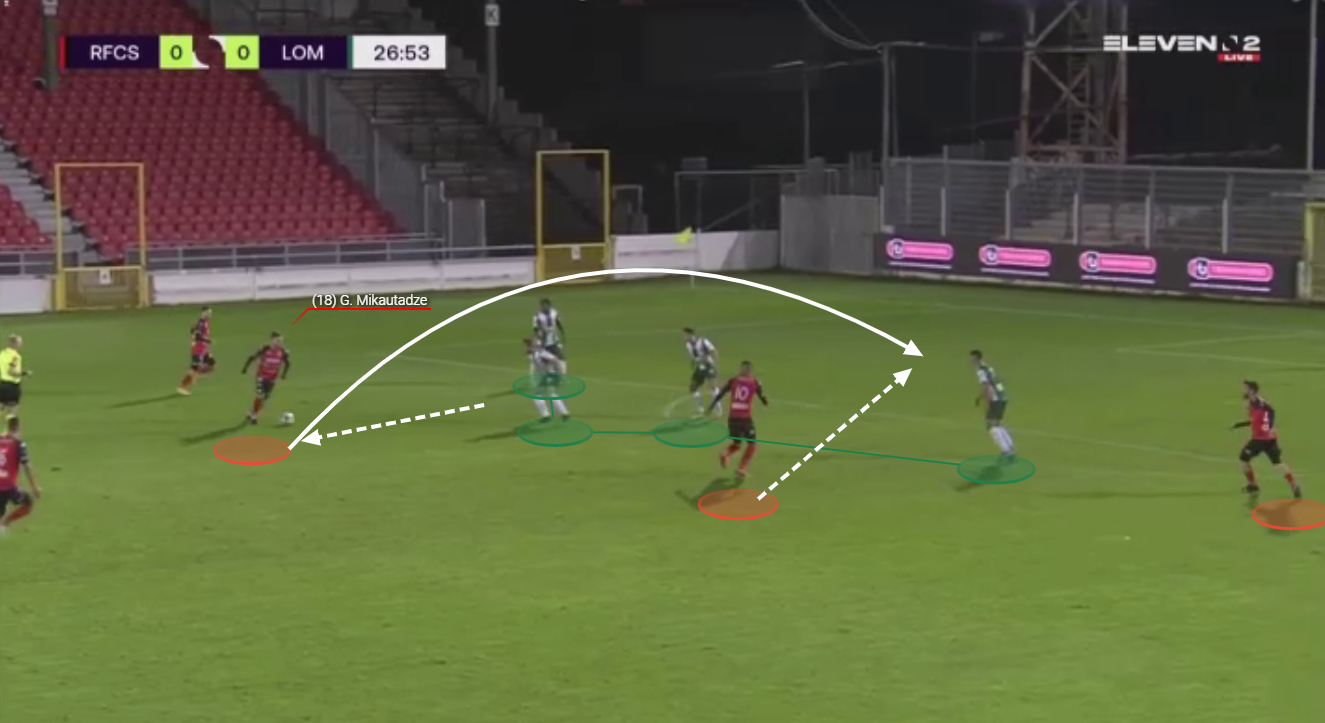 In this example Mikautadze had initially been driving forward towards the opposition penalty area but, in keeping with his ability to quickly change direction, he has dropped back and created separation from the defenders. As he does so there is a player in a central position who is moving vertically towards the opposition area.

As the run develops the young forward has the vision and technical ability to connect a pass perfectly over the top of the defensive line and into the penalty area. 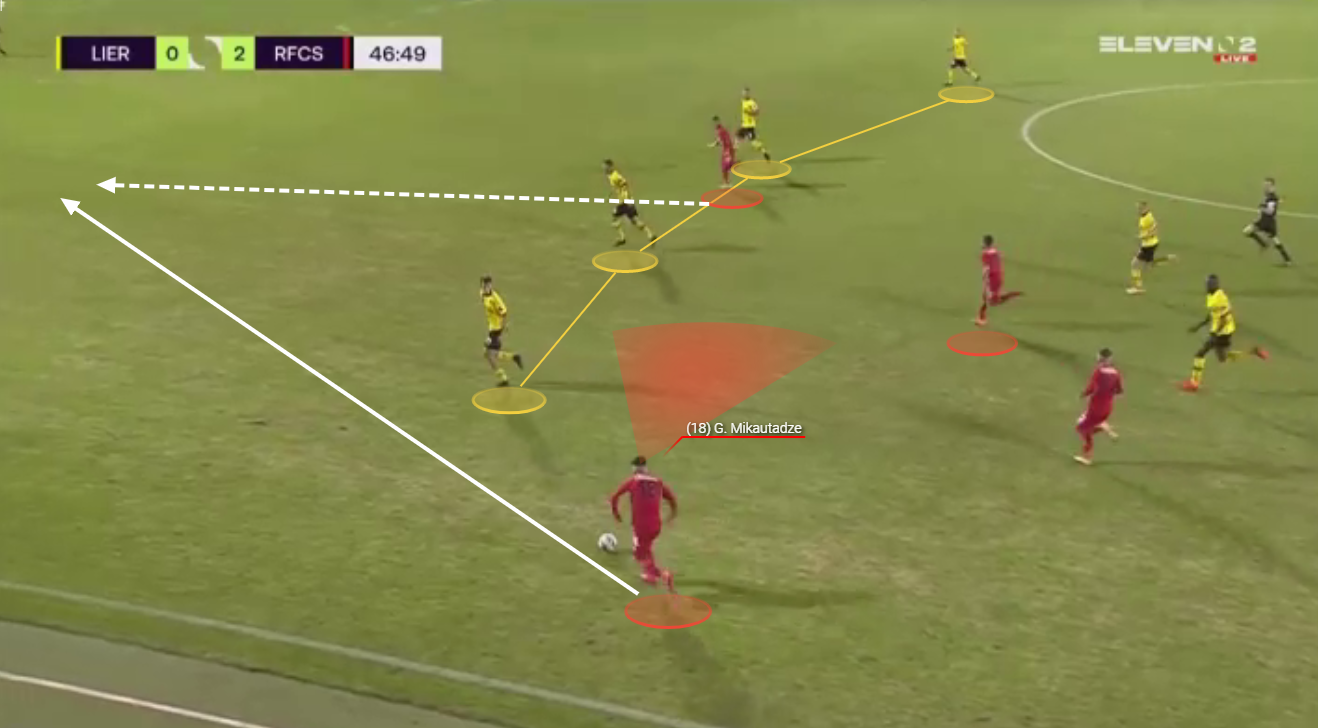 Mikautadze is also excellent when it comes to helping his side to progress the ball through the thirds with his passing range and vision. We can see an example of this here as the young forward has collected possession of the ball wide on the left-hand side.

You can see immediately that there are other options that Mikautadze could use. He could drive inside into central positions, a move that you may expect to see from young forward players.

Instead, he sees the run developing centrally as a teammate looks to break beyond the defensive line. He plays a well weighted ball into the half-space to find this player making the attacking run before he then follows the pass to support the man taking possession in the final third.

This is likely to be the only season that Mikautadze spends away from Metz on loan. He will return to his parent club at the end of the season and attempt to break into their first team. This season has been a difficult one for the French side with injury robbing them of their most effective attacker in Ibrahima Niane and the injection of energy and desire of Mikautadze to the squad will be welcome.

Make no mistake. If the young forward carries this form forward with him and replicates it in the French top-tier then top clubs across the continent will be paying very close attention. 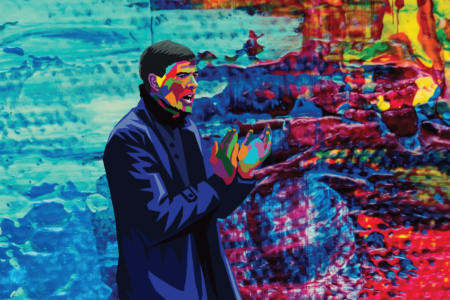 Steven Gerrard: How he has improved Rangers’ defensive efficiency

The Scottish Premiership has been quite one-sided over the last few years, and it looks like it will be the […]