“Playing football is very simple, but playing simple football is the hardest thing there is.”

There are very few players in the world who can do great things in the most versatile of ways. They’ll be surrounded by 4-5 players and then they’ll make one touch and all of them will be beaten. They can break lines just by moving from one place to another. They’ll be all over the pitch doing everything that needs to be done, yet you won’t be able to notice them. That won’t be topping statistical charts, yet they’ll be the one because of whom others will bag the numbers.

The subtleties of greatness lie behind the curtains where statistics cannot reach.

You watch the game, you won’t see them. You watch them, you’ll understand the whole game.

One such player who has been doing all these things for Barcelona is Frenkie de Jong, born and trained in the same great nation and the same holy football academy as Johan Cruyff.

De Jong plays in a double pivot system in a 4-2-3-1 as a box-to-box midfielder as shown in Barcelona’s typical starting lineup this season. 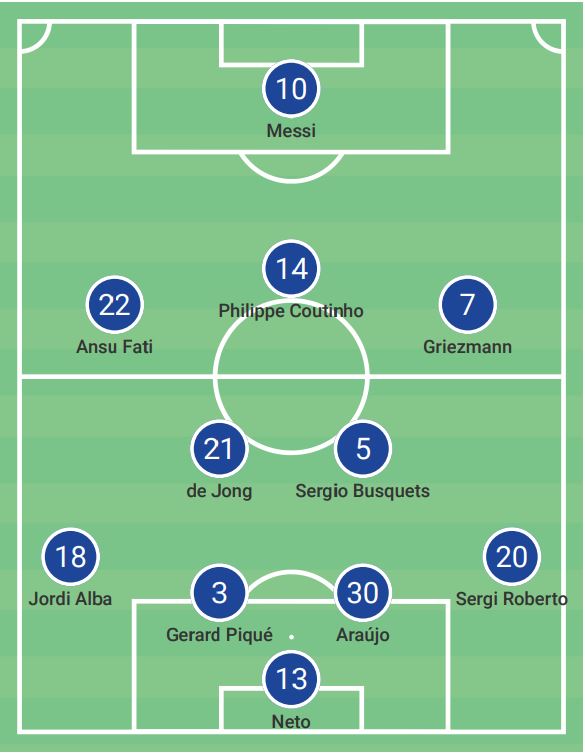 In this system, De Jong operates as a box-to-box midfielder during the attacking transition, and while defending, along with Sergio Busquets and the centre backs, he will create a defensive mid-block with the full backs getting compact and the forwards continuously pressing the opponent in a zonal press trap set up by Ronald Koeman.

This box-to-box role of De Jong is seen in his heatmap below. His movement, as shown, is spread all over the pitch, literally covering the whole field. 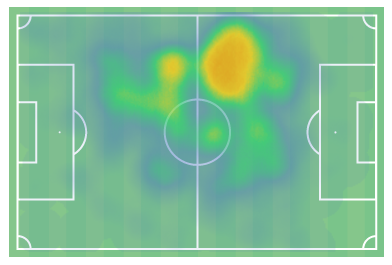 In a team like Barcelona that like to build their attack from the back, De Jong and Busquets become the link between the defence and attack. This is clearly seen if you take a look at Barcelona’s pass map of every game this season. Below is an example from the clash against Villarreal. 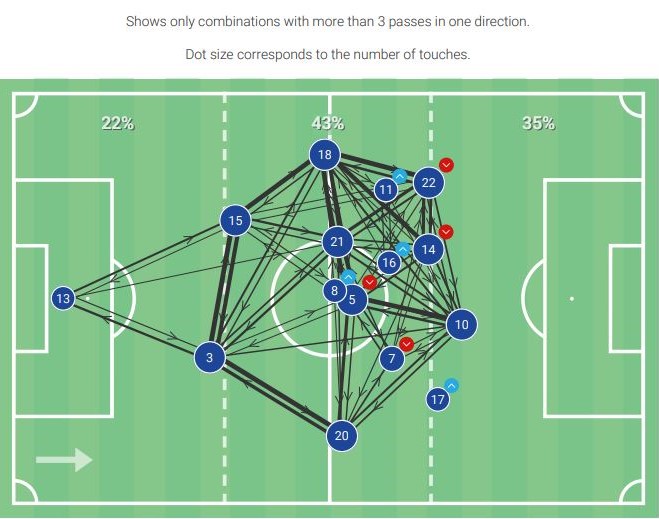 Here is an example of that. Below is the pass map of Barcelona’s worst Champions League defeat in history, the 8-2 demolition at the hands of Bayern Munich last season. Observe that there is no structure at all in passing. No shape. It’s like a swirling ball of rapidly increasing entropy. 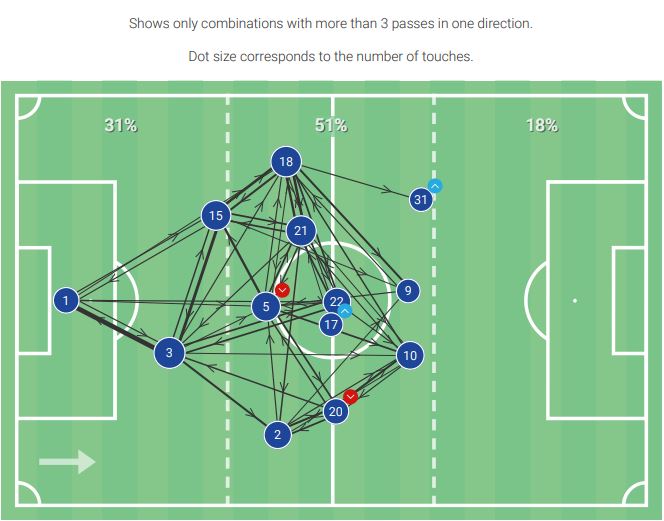 It’s all just a mess. Complete chaos. And observe how every player is out of position and nothing seems to be happening.

The reason for all this is the missing link at the centre of the park, which De Jong provides now in Koeman’s new formation (see the Villarreal pass map above). 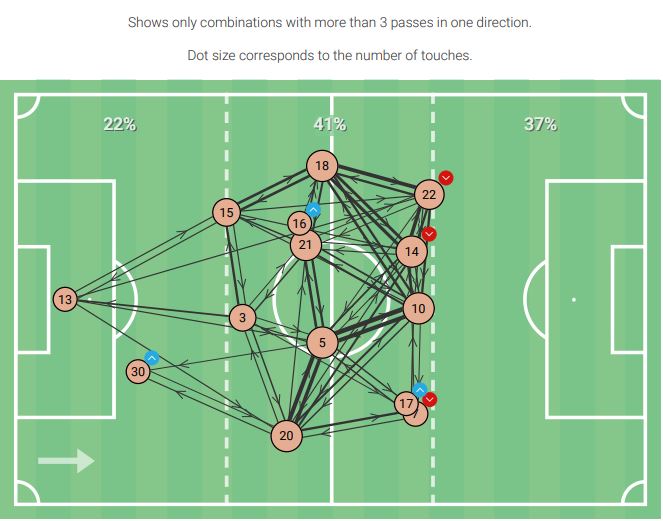 This was one of the most tactically accomplished games that Barcelona have played this season. Normally, the pass map is one regular polygon. Here we see two and not to mention that Barcelona were a man down in the second half and that they hadn’t won a single game against Celta away from home for 5 years since Luis Enrique and Xavi Hernández had left. Here we see a pentagon centered by Busquets and a hexagon, inside the pentagon, with De Jong at the centre as a focal point for the entire team.

And below are the pass maps of the games against Sevilla, Getafe and Real Madrid (in that order). In all the three games, De Jong is out of his central role and the entire tactical makeup of Barcelona fell apart, resulting in Barcelona getting brutally beaten in all the three games, with two heart-wrenching losses against Getafe and Real Madrid and a lucky draw against Sevilla. 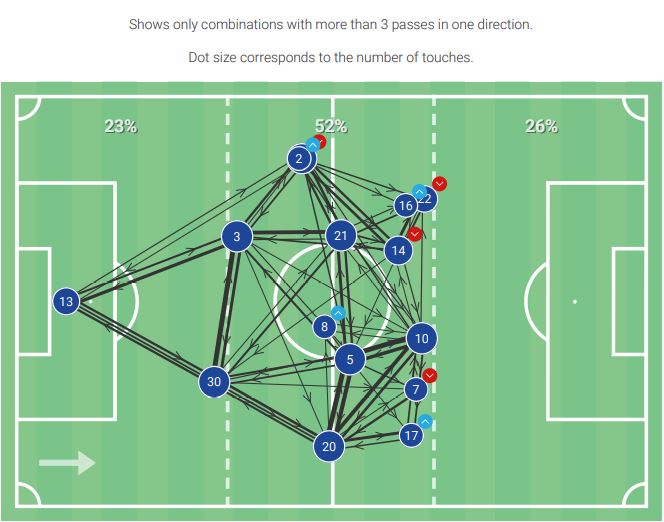 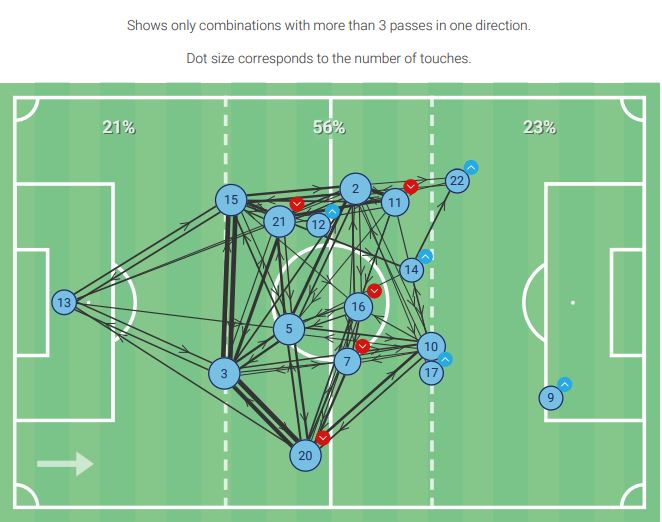 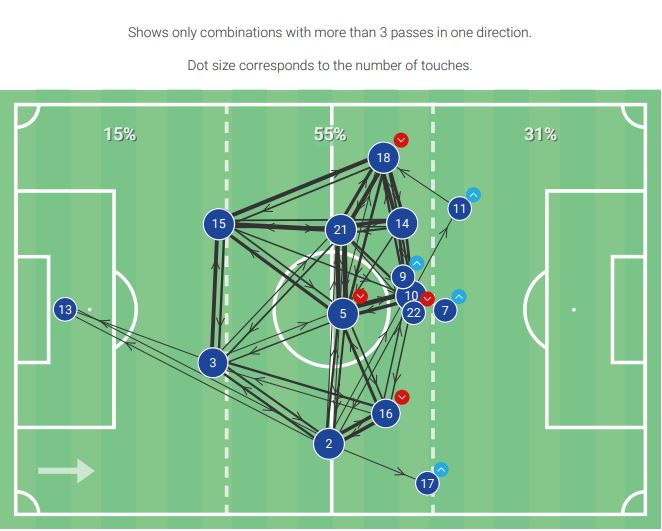 That’s how influential De Jong is for Barcelona. He provides the most crucial thing that is required for a team to dance in the melody of Total Football – a central engine that powers the game for Barcelona by distributing balls.

Earlier this work used to be done by Xavi, alongside Busquets. But since his departure Barcelona have lost the centrality in their gameplay. This was one of the prime reasons why their away form has been subpar; because they might get away with some tactical loopholes at the Camp Nou where the environment is in their favour, but the lack of a link and centrality would hurt them very much in enemy territory where the opponent will be all over them.

This was also one of the prime reasons for the debacles that happened in Rome, Anfield and against Bayern.

This link up play and centrality is what creates the difference between winning, losing and drawing. 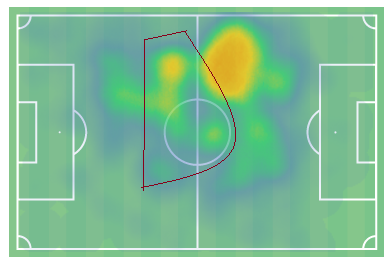 Above is De Jong’s heat map for this season. The marked region is where the mid block is formed. There’s both defensive and offensive advantages to this.

Notice that the colours aren’t actually very intense in that region. The most intensely heated region is on the left flank. It’s because it’s from the left flank where De Jong does most of the running up and down the turf, but the marked region is where he spends most of the time, holding that position to create the mid-block.

This will be understood in a clearer manner when we look at the average positions of De Jong in the five La Liga games that he has played. It’s in the order of Villarreal, Celta de Vigo, Sevilla, Getafe and Real Madrid. 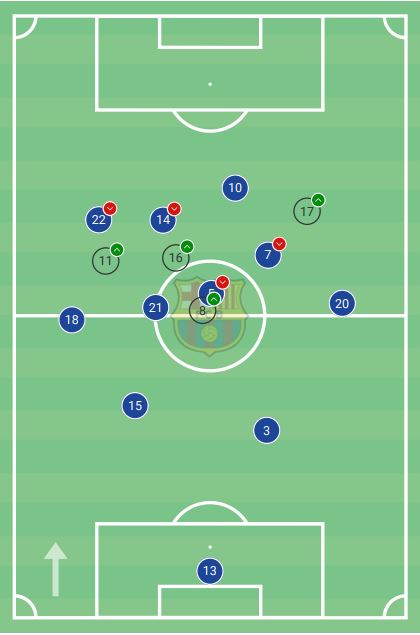 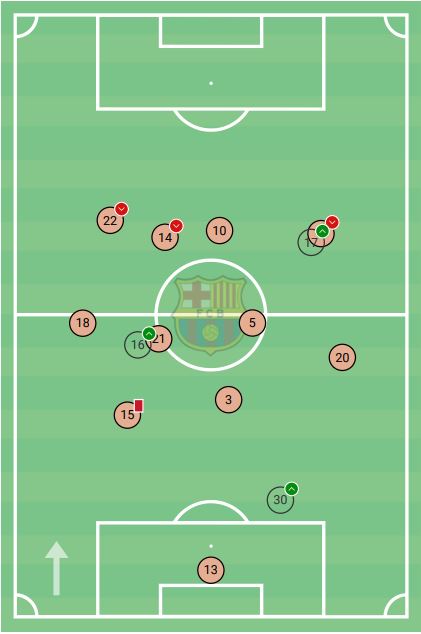 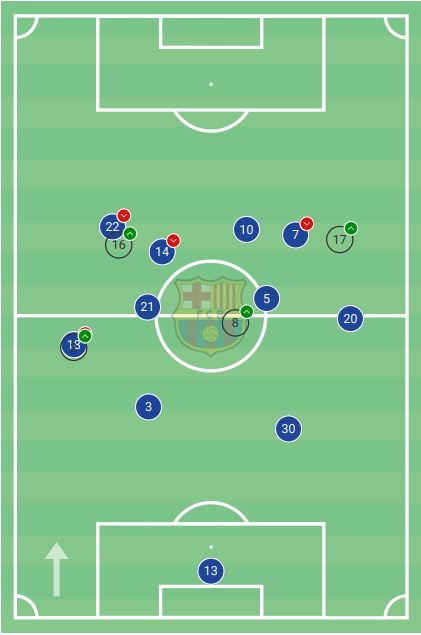 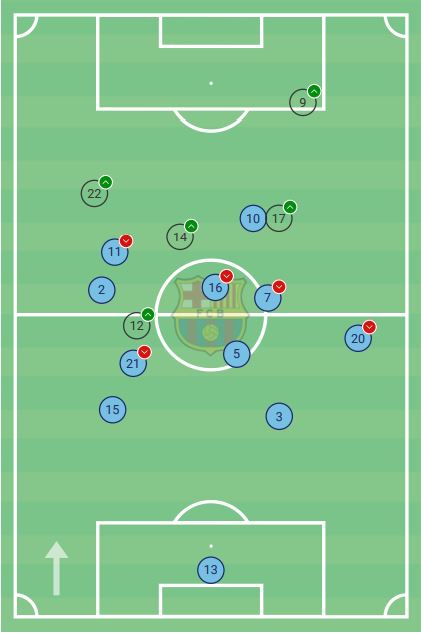 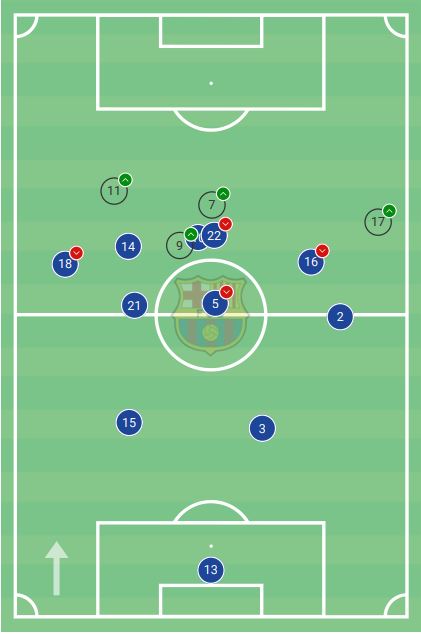 Notice De Jong’s (no.21) average positions in all five games. It is somewhere inside the marked region in the heat map above.

That’s the position where he, along with Busquets, forms the mid-block.

The defensive mid-block is one of the biggest advantages of a 4-2-3-1.

A defensive mid-block arises due to the gap between the pivots and the centre backs. A low block (in a 5-3-2 or 4-4-2 or the old 4-3-2-1) takes away sharpness from the attack as the team has to dedicate a lot of personnel in the defence to create a super compact low block. It can sometimes even require to play as many as five centre-backs.

A defensive high line (in a 4-3-3 or 3-4-3) can be broken in a snap by super fast wingers and forwards, because the defenders are way too high up the pitch.

But a defensive mid-block is very difficult to break. It needs a tactical masterclass from the opposition management to bypass. And the maximum onus to perfect the defensive mid-block lies on the shoulders of the box-to-box midfielder, because he is spread all over the pitch and whenever the block needs to be formed, he has to get back to his position very quickly.

If a team like Barcelona, who look to attack brutally, have to play a 4-2-3-1 with perfection, the defensive mid-block becomes a crude necessity rather than a luxury. Because in a 4-2-3-1, Barcelona are, by default, outnumbered in the midfield because teams, these days mostly, play 4-3-3 or 3-4-3 or 4-4-2.

To overcome this numerical disadvantage the full backs need to move higher up the pitch, and along with the two centre-backs act as one solid unit ready to move out wide and get compact as and when necessary.

So, while doing this if Barcelona lose possession and the opponent immediately counters, then at that time the mid-block plays a huge role. It helps the centre-backs not get exposed because De Jong and Busquets are in front of the defence to stop any attacking threats from the opponent. This gives the full backs time to track back from higher up the pitch to form the defensive line once again.

And if the opponent looks to counter from the flanks, then De Jong along with the wingers (the wingers remain low in a 4-2-3-1) can initiate a man-to-man press which will then give the four defenders time to reorganise themselves and time for the forwards to deploy the zonal trap.

So while defending, Barcelona’s defensive transition and final shape is decided by the movements of De Jong.

As Johan Cruyff used to say, “Attackers are my first defenders.”

Brilliance of De Jong and misery for Barcelona

There’s no doubt about the fact that De Jong is completely bossing the entire pitch for Barcelona. The 4-2-3-1 of Ronald Koeman does wonders for him but is a tactical problem for Barcelona.

Lone striker formations are completely based on the players and their physicality. Bayern have a target man like Robert Lewandowski up top to provide an ice cold finish, a playmaker like Thomas Müller and completely electric players in Alphonso Davies, Joshua Kimmich, Leon Goretzka, Christian Tolliso and Serge Gnabry. These player profiles perfectly suit the tactical demands of a 4-2-3-1.

And with a player like De Jong, fluid formations will do wonders, especially in diamond formations, where he’ll be placed at the apex.

As the popular footballing saying goes, “Football is a game of triangles, of geometry.” And De Jong has certainly mastered the mystical music of footballing geometry and trigonometry.

With proper formations and tactical brainstorming by Barcelona’s management, De Jong’s complex simplicity can be used to reach the same heights Pep Guardiola’s “monsters” of 2009 reached with simplistic geniusness of football’s greatest ever midfield duo, Xavi and Andrés Iniesta.

As Johan Cruyff said, “Football is a very simple game. But playing simple football is the hardest thing there is.” 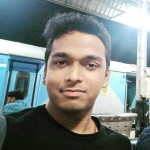 An admirer of the lost knowledge of ancient Bharatvarsha.

A vivid reader and a keen observer.

A fan of Pep Era at Barcelona and a firm believer of Cruyffian Philosophy and the mystical melody of Total Football.