Edinson Cavani is a PSG legend. He joined from Napoli in the Serie A in 2013 and has been at the club for seven years. In this time, he has won the Ligue 1 six times among other things. PSG have found a short term substitute with the signing of Mauro Icardi from Inter. However, PSG will want to have a long term replacement for Cavani, and one who will begin another great career at the club.

This substitute could be an experienced player or a young star. We have made this data analysis to search for a potential replacement for Cavani. This research is based on certain data and statistics and does not evaluate other data. Therefore, this analysis serves to be a starting point to find a suitable replacement for Cavani. More detailed analysis of the players and watching them live would be needed to get a whole understanding of the players.

For this report, we will find potential replacements from strikers in the top five leagues. These leagues are Premier League, La Liga, Serie A, Bundesliga, Ligue 1. We do this because these leagues contain most of the best players in professional football. This is needed as Cavani has been one of the best strikers in Europe these seasons and so the replacement has to be of a high level.

We have also only looked at players who are 29 or younger. PSG will want their striker to be relatively young or to have many more years of football ahead, hence the age restriction. Additionally, the players researched have played a minimum of 1000 minutes this season, to make sure there is a fair comparison between players.

This avoids players having inflated statistics because maybe a centre-back has played fewer minutes and so has better stats, but this does not make him a better player. 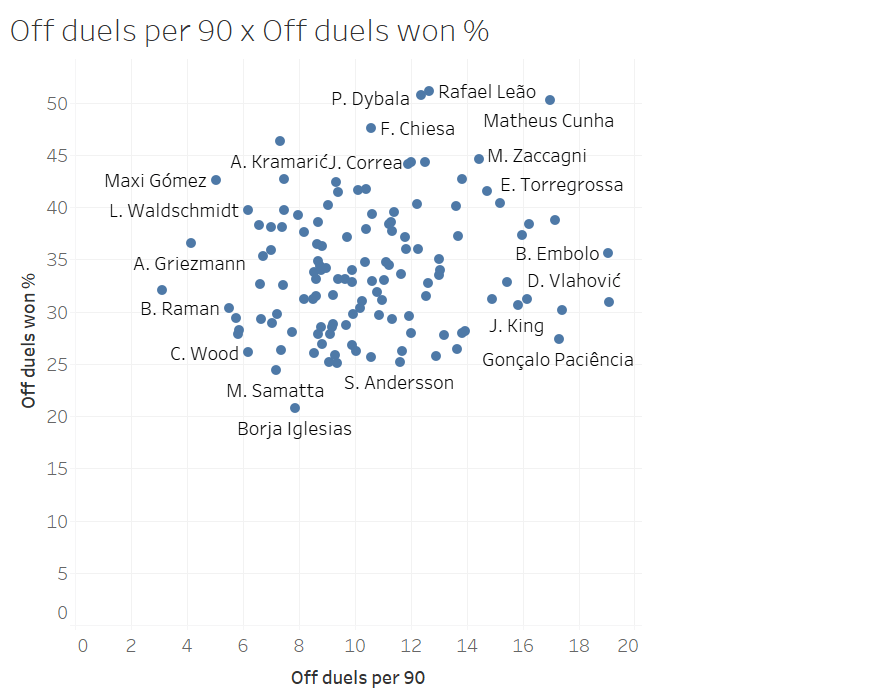 To be at PSG, you have to win your offensive duels. Strikers at this club are expected to play well with the ball at their feet to be able to generate danger by themself.

An offensive duel is when a striker is trying to get past a defender in a 1 vs 1 situation or is guarding the ball. If a striker wins his offensive duels, it means he can create chances for himself and make better use of the ball in possession.

Paulo Dybala from Juventus also has great numbers with his 12.38 offensive duels per game and a success rate of 50.79%. 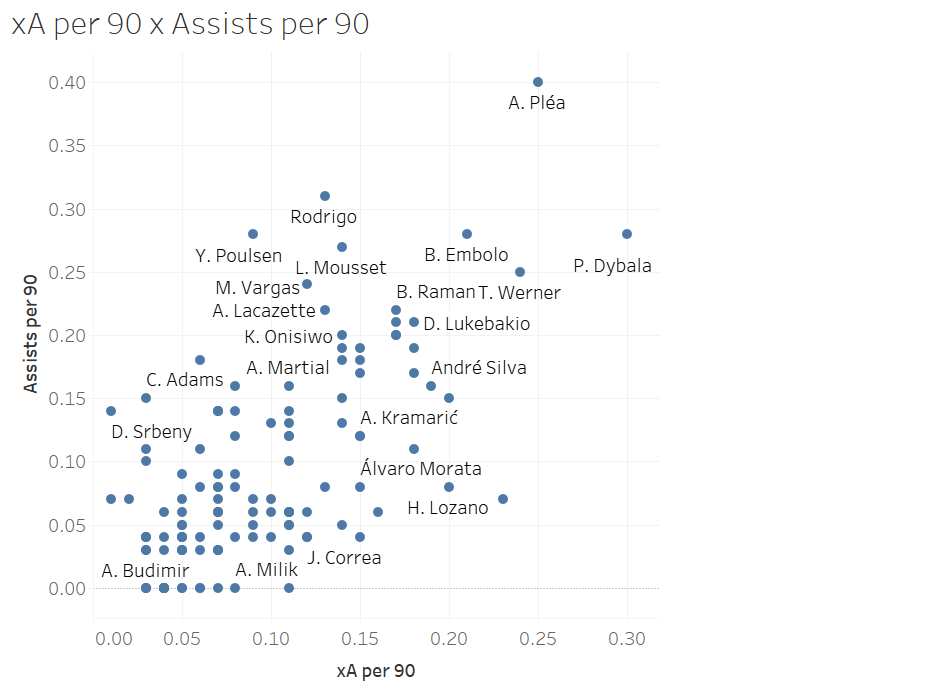 In today’s game, it is preferred if the striker is capable of more than just scoring goals. It is highly valued that he participates in the team’s play and the build-up, as Luis Suarez did in Barcelona. It means he should be able to assist his teammates as well as scoring.

That is why we will look at the player’s expected assists per game (xA per 90) as well as their actual assists per game. We do this to check whether they really have as many assists that they deserve or are actually overperforming in this aspect.

Alassane Pléa from Borussia Mönchengladbach is the clear winner in this category, having 0.25 xA per game and 0.4 assists per game. This means he is actually outperforming, and his teammates are creating more value with his passes.

The next player who stands out once again is Paulo Dybala, making 0.3 xA per game and 0.28 assists per game, proving he is underperforming in this aspect.

Also worth mentioning are Breel Embolo and Timo Werner. Embolo is Pléa’s teammate at Borussia Mönchengladbach, showing how that team wants their strikers to be highly involved in the play. 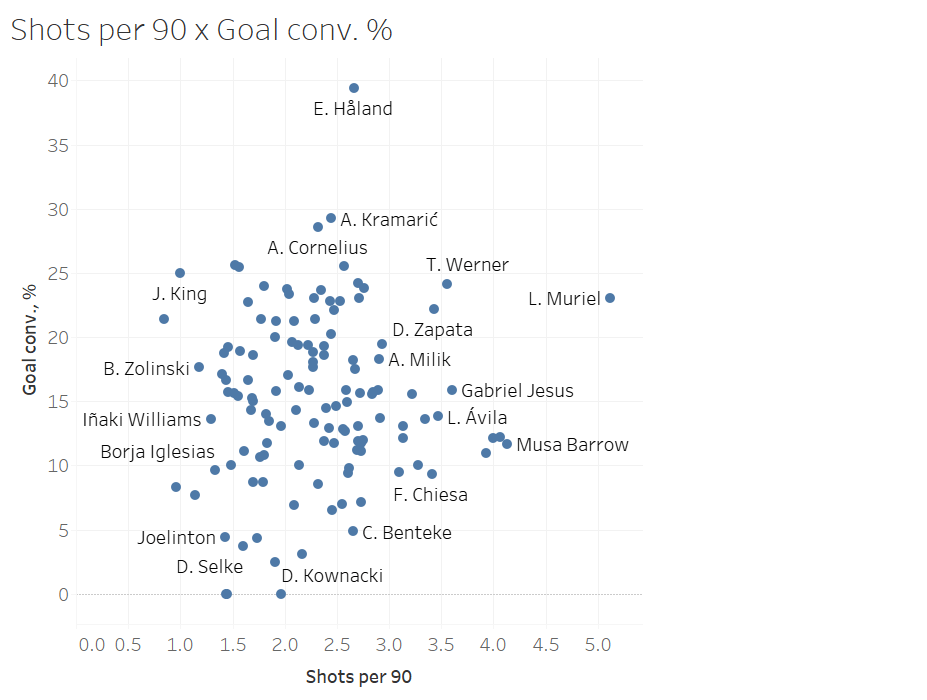 A striker for PSG needs to be efficient in his finishing. When he has the chance to score, the efficiency rate needs to be high at a top club such as PSG. Since PSG are fighting for trophies and if they want to compete for the UEFA Champions League, taking advantage of their chances is the key to success. It is what made Cavani so important at PSG.

It is why we will examine how many times the strikers shoot per game and how many of these shots become goals, through their goal conversion rate.

Once again, Timo Werner shows up. This time he performs well with his 3.56 shots per game and his 24.14% conversion rate. 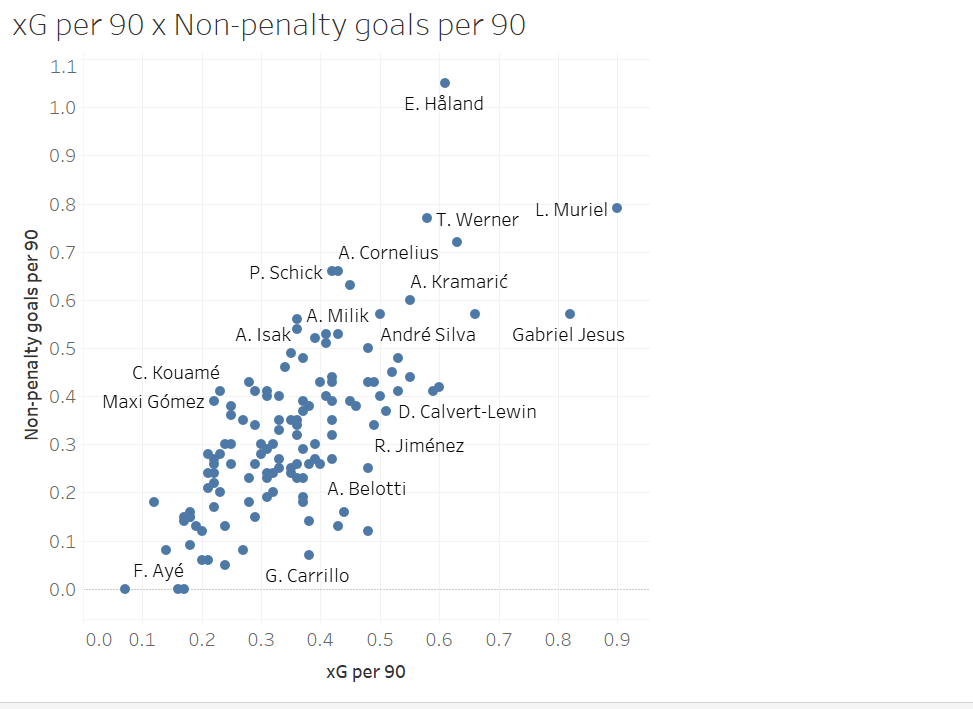 Now we move on to the most important metric to measure a striker by, his goals. In the end, goals win games which means that strikers are usually valued depending on how they do in this statistic.

Therefore, we will look at their expected goals per game (xG per 90) and their non-penalty goals per game. We will use this because maybe a striker is in charge of the penalties for a team and so just goals per game would not give us a correct number of how he does when the ball is in play.

Erling Håland is superior in this metric too, making 1.05 non-penalty goals per game and 0.61 xG per game. This is incredible as it means he is scoring once every game and is actually outperforming, proving his quality in his finishing.

After this data analysis, we have found three centre-backs that PSG could concentrate on to replace Cavani.

Moving on, he proves that apart from scoring, he can also provide his teammates with assists, making 0.3 xA per game and 0.28 assists per game. This shows that he is actually underperforming in this metric.

For his other statistics, he is not the best but still has very respectable numbers. For his goalscoring ability, he has an xG of 0.37 and actual non-penalty goals per game of 0.39. Consequently, these numbers mean that he is scoring at least one time every three matches, which is still great for a striker who can also assist.

The 24-year-old Werner has had a great season, reaching the Champions League semi-finals with RB Leipzig. He actually stands out in 3 metrics: his assists, his conversion rate, and his goals.

He has an xA of 0.24 per game and actual assists of 0.25. These are great numbers for a striker and show he is an intelligent player who can get involved with the play.

His goal conversion statistics were one of the best, making 3.56 shots per game with a conversion rate of 24.14%. In other words, more than one of every five of his shots becomes a goal. Connected to this are his impressive goalscoring statistics, with his 0.58 xG per game and 0.77 non-penalty goals per game.

He is overperforming by a significant amount which shows the quality he has in his finishing, needing chances that are not as clear but which he scores.

For the last metric, he makes 9.33 offensive duels per game and has a success rate of 42.43%. These are very respectable numbers as he has a decent success rate for the many duels he is in.

The 20-year-old Borussia Dortmund striker clearly stands out in both goalscoring metrics by a fine margin. In both graphs, he is the farthest on the top-right by a good amount. He is also the youngest in this list.

He makes 2.66 shots per game and scores in 39.39% of these. This is outstanding as it means that more than one of every three shots becomes a goal, which is truly unbelievable seeing he plays in one of the top 5 leagues and is very young.

The following metric is by far the most amazing as he makes 1.05 non-penalty goals per game and has an xG per game of 0.61. Therefore, he scores once every game and is outperforming by a lot.

He is not that involved in the team’s plays as he does not assist much, with his 0.08 xA per game and 0.16 assists per game. Once again, he is outperforming in this aspect, but these are not high numbers.

Lastly, he makes 7.35 offensive duels per game with a success rate of 26.37%. He needs to improve on his success rate, but so far, he is complementing this low statistic with the number of goals he’s making.

This data analysis has shown us some useful metrics to measure PSG strikers. A PSG striker has to be clinical in front of the goal as it is a high-quality team that aims to win every game. They also need to be involved in the team’s play as they have quality players to link up with to create chances consistently. All these metrics shown need to be at a high level to be able to replace the PSG legend that is Cavani.

This analysis also gave us three potential replacements for Cavani. Evidently, Cavani has been an essential asset at PSG, but if he were to be replaced by any of these three strikers who are all young, the striker position would be in good hands. Paulo Dybala, Timo Werner, and Erling Håland are all top-class players who can step in Cavani’s footsteps.