The end of the 2019/20 season saw Manchester United sneak into the top four after having spent the majority of the season outside the Champions League places. While Leicester City’s indifferent form since the turn of the year was a big factor here, United themselves were also impressive, with Bruno Fernandes’ arrival in January galvanising the entire club. Finishing third in the league, albeit on goal difference, and going out in the semi-finals of three cup competitions (FA Cup, Carabao Cup, and Europa League) constituted a satisfactory season for the Red Devils, but there is a need for significant improvement if they want to challenge for the biggest trophies once again. While the focus has been on United’s pursuit of Borussia Dortmund winger Jadon Sancho, there are other areas which need investment as well, most notably at centre-back.

Harry Maguire established himself as club captain not long after his summer arrival, while Victor Lindelöf served as his regular partner at the heart of United’s defence. Despite finishing the Premier League season with the third-best defensive record, United looked shaky at the back on a number of occasions. Additionally, despite having seven senior centre-backs on the books, Ole Gunnar Solskjær clearly does not trust too many of them, as can be seen from the fact that after Maguire and Lindelöf, Axel Tuanzebe had the most minutes in the league at centre-back, with just 186 minutes of action. Thus, there is a need to bring in quality at centre-back, which will give Solskjær options to rest and rotate. Additionally, both Maguire and Lindelöf were caught out on occasion by pacey forwards, and so a centre-back possessing pace would be a welcome addition. Lastly, United need a centre-back capable of building up through the back, either through passing or by carrying the ball himself, as the team have been vulnerable to being pressed in their own defensive third.

Keeping all this in mind, we believe that RB Leipzig’s French centre-back, Dayot Upamecano, would be the best option for the club to pursue in this transfer window. He turns 22 in October but has already shown his ability at the highest level, starring for the German club in the Bundesliga and the Champions League over the last couple of seasons. This scout report will have a look at his attributes and style of play, to demonstrate why he would be a good fit for Manchester United.

Upamecano is a pacey centre-back who also possesses good ability on the ball. He has featured as part of a back four as well as a back three for Julian Nagelsmann’s Leipzig side, which shows his versatility and ability to slot into different roles in the backline. His heatmap, shown below, displays this – 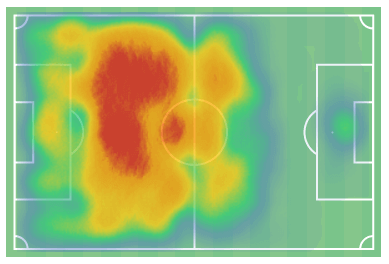 As we can see, Upamecano covered the width of the pitch in his role as centre-back, while the majority of his actions came midway in his own defensive half, and even higher up the pitch, showing how the Frenchman was comfortable playing in a high line for Leipzig. This is important for United, as Solskjær has also shown that he wants to deploy a high line wherever possible, while Upamecano’s recovery pace would make him better suited to this than Maguire or Lindelöf. Upamecano usually played as the central player in Leipzig’s back three, but also as the left-sided or right-sided defender when Nagelsmann played a back four. This shows his positional versatility which will be handy for Solskjær as the Norwegian has shown a willingness to use a back three at times.

Before moving on to some of the visual evidence, it is instructive to have a look at some statistics to further highlight some of Upamecano’s attributes.

When compared to the rest of the centre-backs in the Bundesliga, Upamecano ranked 12th for recoveries (13.5/90 minutes) and 26th for counter-pressing recoveries (5.22/90 minutes). These numbers show how proactive he is while defending, as we will see later on in this analysis as well. The Frenchman engaged in 7.09 defensive duels/90, with a 76.65% success rate, which is again a very good indicator of his ability to stop the opposition from progressing into dangerous areas. There is a slight weakness in the air, as seen by his numbers for aerial duels (2.92 duels/90; 62.96% success rate), but this is also a function of the way Leipzig play.

His ability on the ball and capability to start attacks can be seen from the following metrics. Upamecano ranked fifth among all Bundesliga centre-backs for offensive duels (3.67/90; 46.08% success rate) and 11th for dribbles (1.33/90; 70.27% success rate). The youngster is already proficient at being able to progress the ball up the pitch – with 2.02 progressive runs/90, he ranked sixth among Bundesliga centre-backs last season, and 11th for progressive passes, with 11.95 such passes/90. 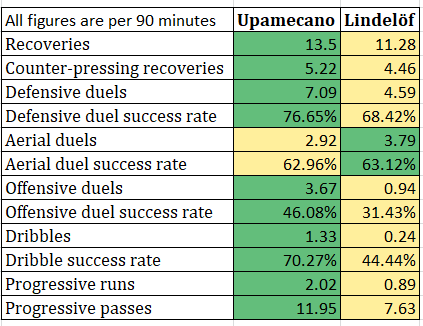 Upamecano does better on all the metrics, except aerial duels. While this is not a perfect comparison since United and Leipzig have different styles of play, it is still indicative of both players’ ability to an extent. With Maguire having been brought in at considerable expense last season, as well as being the club captain (for now), it will be the Swede who will make way for Upamecano should he arrive at Old Trafford, and the stats show that United would be getting an upgrade in almost every regard.

While the game may have evolved to an extent where centre-backs are expected to be comfortable getting involved in build-up play, their primary role still is to protect their own goal. Upamecano is extremely proficient in this regard, as he has both the physical and mental attributes needed to perform his role well.

While he may not be the tallest centre-half at 1.86 m (6 ft 1 in), Upamecano is powerful and has the upper body strength to shake off opponents. At the same time, he is incredibly fast, managing to keep up with the fastest strikers and wingers he has faced so far. These attributes make him the perfect candidate to play as part of a high defensive line, as he is comfortable stepping out to tackle and dispossess opposition players, knowing that he has the pace to recover in case of a mistake or misjudgement.

Thus, it is no surprise to see that the Frenchman is generally a proactive defender, looking to nip in front of opposition forwards to intercept the ball. He is generally happy to get tight to players, and only backs off to hold his position when there is no cover available, or when caught out on the counter-attack.

A map of his recoveries shows how proactive he is, with a number of defensive actions in the middle third, and even in the final third on occasion, beyond the half-line – 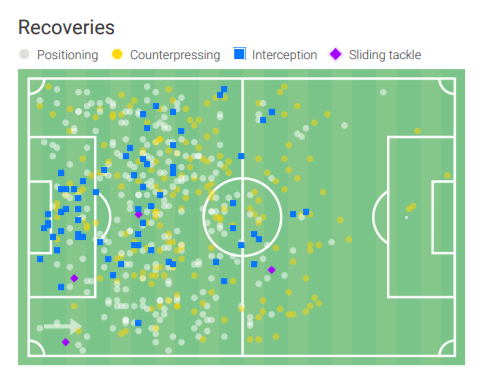 This can be seen in the examples below as well –

He is also extremely good at anticipating passes and cutting them out. Upamecano does not always charge towards the ball; he is capable of holding his position if needed to win the ball back, while he is also intelligent while defending the box, often spotting threats early and then moving accordingly to snuff them out.

We have already spoken about Upamecano’s recovery pace. This has allowed him to get back and regain possession even after making a mistake high up the pitch, or simply to cover when an opposition forward has broken through RB Leipzig’s defensive line.

These examples only go to show how Upamecano could be extremely valuable as a defensive asset for United. If played alongside Maguire, he could be the proactive centre-back while the Englishman drops deeper to deal with aerial balls as well as to cover behind Upamecano. His blend of speed, strength, and anticipation would be a good mix for United to be able to consistently play a high line and put opposition teams under pressure.

The statistics mentioned earlier showed how Upamecano has been extremely effective at starting attacks as well. He possesses extremely quick feet, along with the ability to drop a shoulder and get away from opposition players. The France U-21 international is also capable of finding teammates in space with a pass. Both of these attributes, taken together, mean that Upamecano is often the one starting attacks for RB Leipzig from the back.

Another example, this time against Atletico Madrid, shows how he has the sense to know when to lay off the ball.

A map of Upamecano’s progressive actions (both passes and runs) shows the frequency with which he makes these actions, along with the result that they move the play forward – 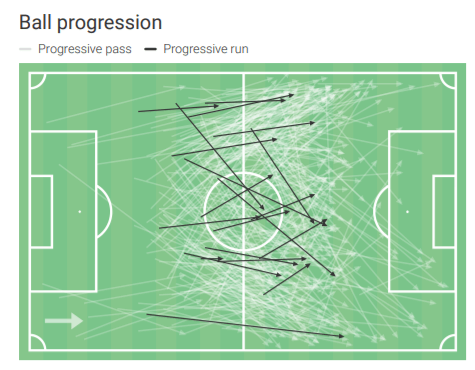 As a centre-back, he often keeps things calm at the back and plays simple passes to his defensive partners, or back to the goalkeeper. However, he does have a pretty decent passing range, and can be relied upon to switch the play or provide passes which find his teammates between the lines, even when he is under pressure from opposition players.

These examples demonstrate how the Frenchman could add value to United’s buildup play. There were many occasions in the 2019/20 season where Maguire and Lindelöf failed to progress the ball, only playing it between each other or out wide to the full-back, and then back again, in that dreaded ‘U’ pattern. It would often take Paul Pogba (when he played) or Bruno Fernandes dropping extremely deep for United to bring the ball out from the back. While we saw a somewhat successful variation on this after the restart, where Nemanja Matić dropped in to form a back three in possession which aided ball progression, the flip side of this is that it created a defensive line without too much pace to recover, if caught in possession. Upamecano would instantly solve both these problems, as he can progress the ball through his passing and dribbling, and if caught out, has the recovery pace to get back and prevent a dangerous situation from developing.

Dayot Upamecano has rightly become one of the most sought-after centre-backs in world football at the moment. He has the perfect blend of athleticism, strength, and ball-playing ability, along with anticipation and intelligence, which make him the perfect centre-back for most teams and styles of play. However, he is best suited to playing in a system with a high line, while we also have already explained why he would be a very good option for Manchester United. Given that he has just signed a new contract at RB Leipzig, the Frenchman will not come cheap, but he has all the attributes needed to ensure that United can become a much more solid defensive unit, while also contributing to their build-up play in possession. 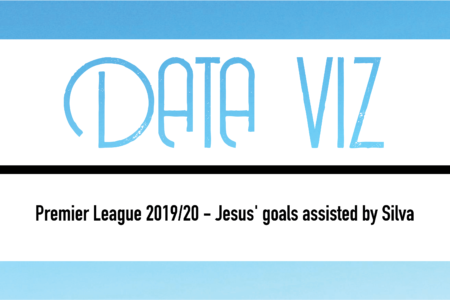