While club competitions are reaching the business end of the season, the Euros are right around the corner having been pushed to this year owing to the COVID-19 pandemic. Despite the change in the footballing calendar this season, with congested fixture lists and a larger scope for injuries, some players have looked to make full use of this year to push for a spot in their respective national sides. While most of the major national sides are filled by players hailing from top clubs like Manchester City, Liverpool, Manchester United, Barcelona, Real Madrid and so on, in this data analysis we are going to identify a few players outside the big clubs in England who could try to stake a claim to be in the squad. Our data analysis will focus on the winger position as we potentially seek to discover, using statistics, England’s best winger outside its ‘Big Six’ clubs.

Before we begin our analysis, it is important that we have a few parameters set-up to identify a list of players to take into consideration. The most basic prerequisite is that the player should be English and outside the ‘Big Six’. Apart from that, we are also looking for pure wingers or players who have played in the winger position in games this season. As a result, full-backs or wing-backs who have perhaps operated further ahead in certain phases of the game will not be considered. Finally, we are looking at players who have played a minimum of 500 minutes this season. Following these parameters, we have a list of eight players that we would be looking at. The players, along with their minutes played this season, are as follows.

A few players like Murphy and De Cordova-Reid have in fact occupied full-back or wing-back roles this season but for our analysis, we will be looking at them in their primary winger role. We also understand that from the offset, Grealish does appear to be the most obvious choice owing to his performances this season but through our analysis, we aim to uncover any other crucial data that could bring up other interesting players. Having cleared this up, we will now get started with our data analysis. The wingers will be judged according to their passing, movement (progressive runs, movement into the box and dribbles), shooting and their defensive contributions as well. 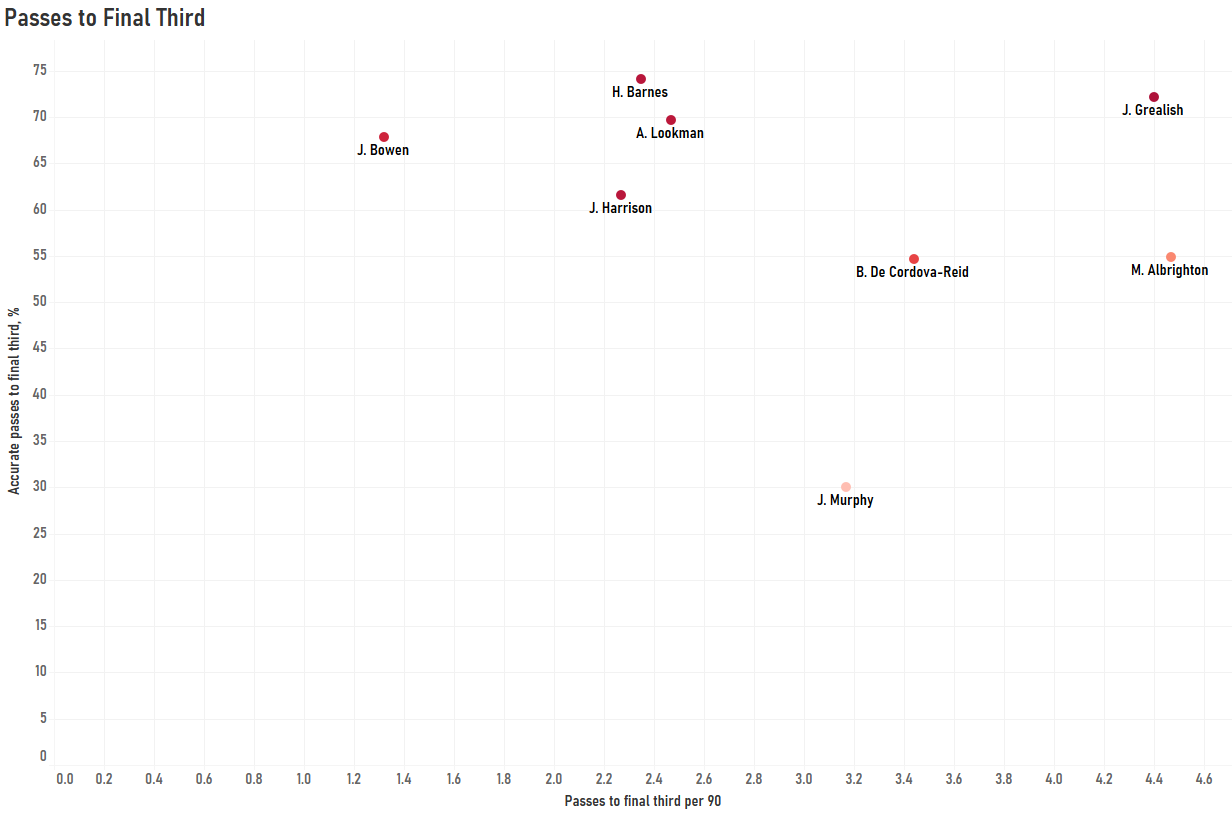 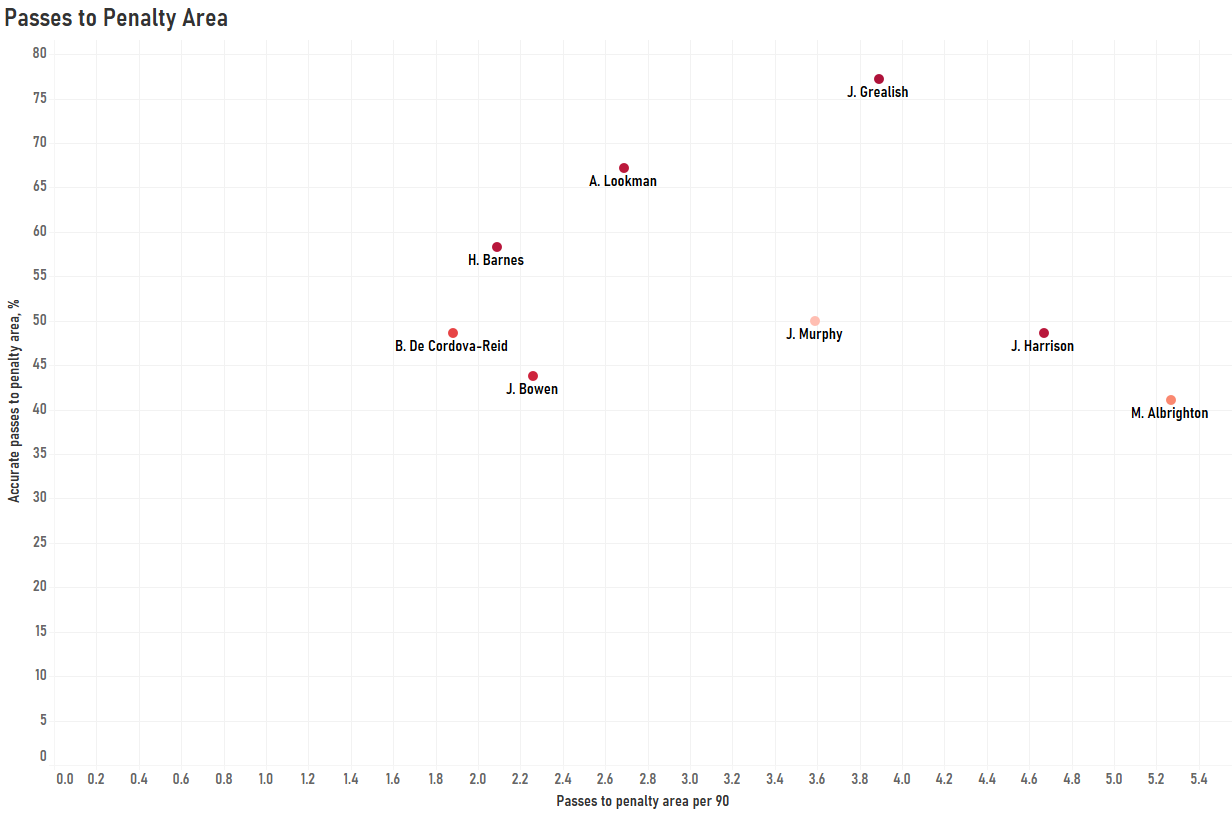 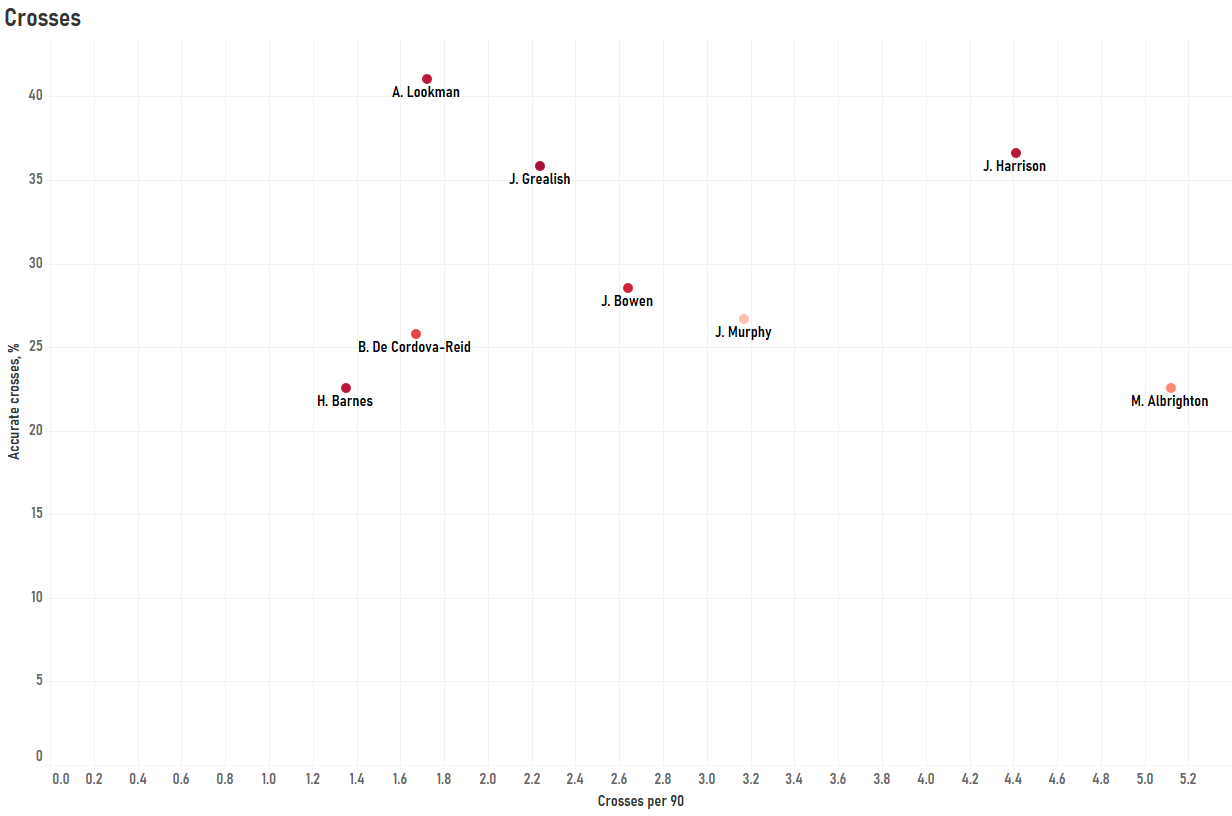 The next passing metric we will look at are the crosses. Albrighton tops this metric as well with 5.12 crosses per 90 and his ability to cross the ball into the box is a characteristic trait of the Leicester man. However, the stats show that despite being a high-volume crosser, his success rate is poor, with just 22.54% of his crosses being accurate. His teammate down the other wing is no better in terms of accuracy, however, with 22.58% of his crosses being accurate. In terms of volume though, Barnes finds himself on the other side of the spectrum with just 1.35 crosses per 90. 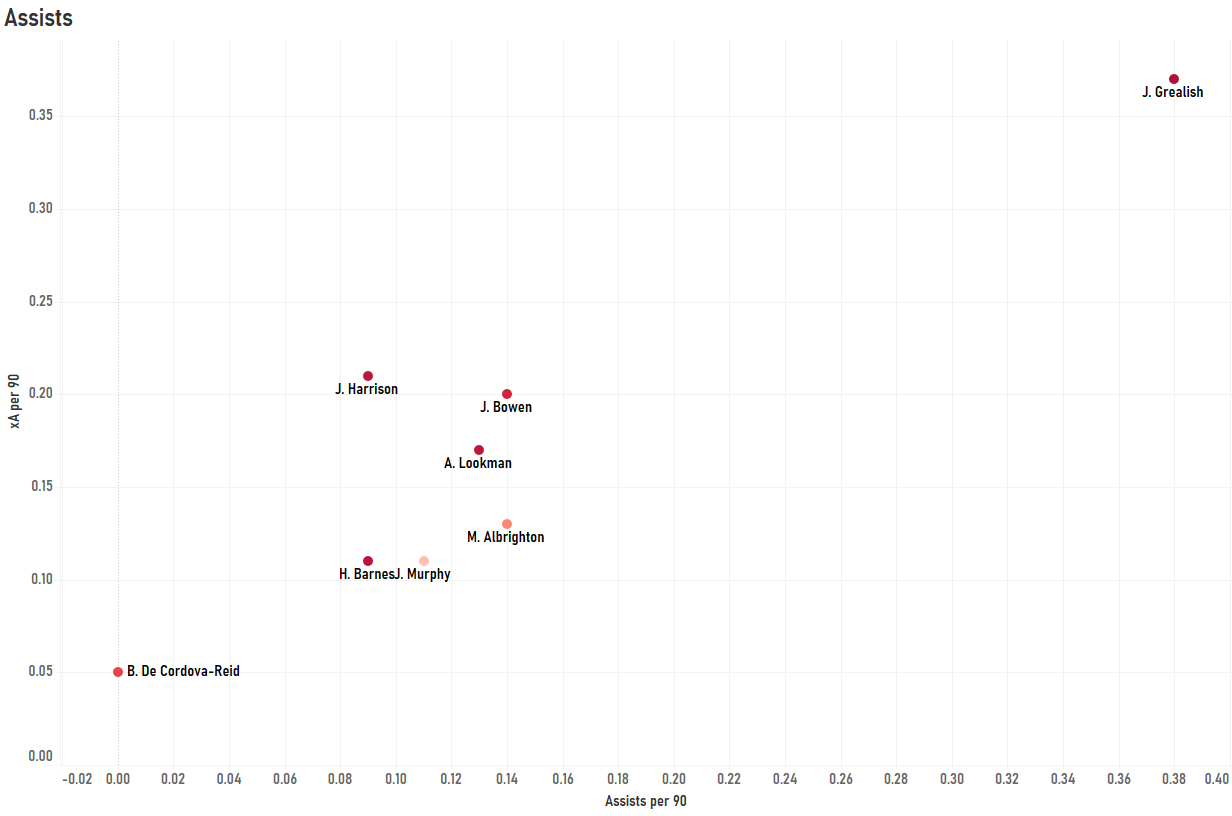 The obvious metric to look at as well is the assists, and we compare the wingers’ actual output to their expected values. Grealish has been exceptional this season and has arguably been one of the best wingers in the league, with his 0.38 assists per 90 being slightly higher than his expected value of 0.37. It’s more of a best of the rest scenario behind him and we see Bowen win this little battle, featuring highly despite not particularly impressing in the passing metrics. His 0.14 assists per 90 is below his expected value of 0.2 as well, indicating that he could in fact have more assists to his name as well. 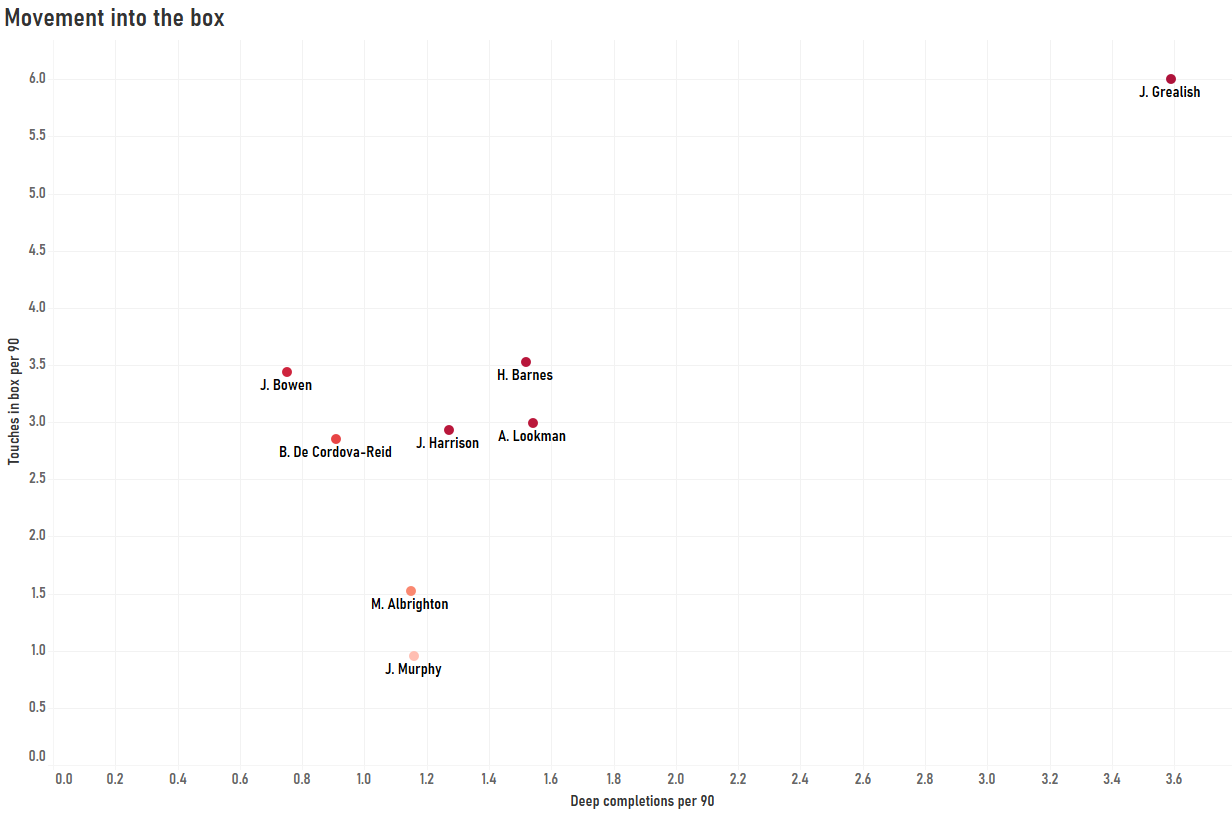 Having looked at the passing metrics, we will now go into the wingers’ movement and ability to attack. We will omit their goal-scoring record, however, as each team would have different goal-scoring capabilities in the league and while we looked at their assists, it was to potentially identify any creator who may have been making chances that have not been converted by their teammates.

Murphy has sometimes operated as a wing-back and this sees him record much lower values in these metrics. Apart from him, the likes of Bowen and De Cordova-Reid have a decent number of touches in the box but their deep completions per 90 is low. Albrighton is the only remaining player and his values for both metrics are much lower than the others. 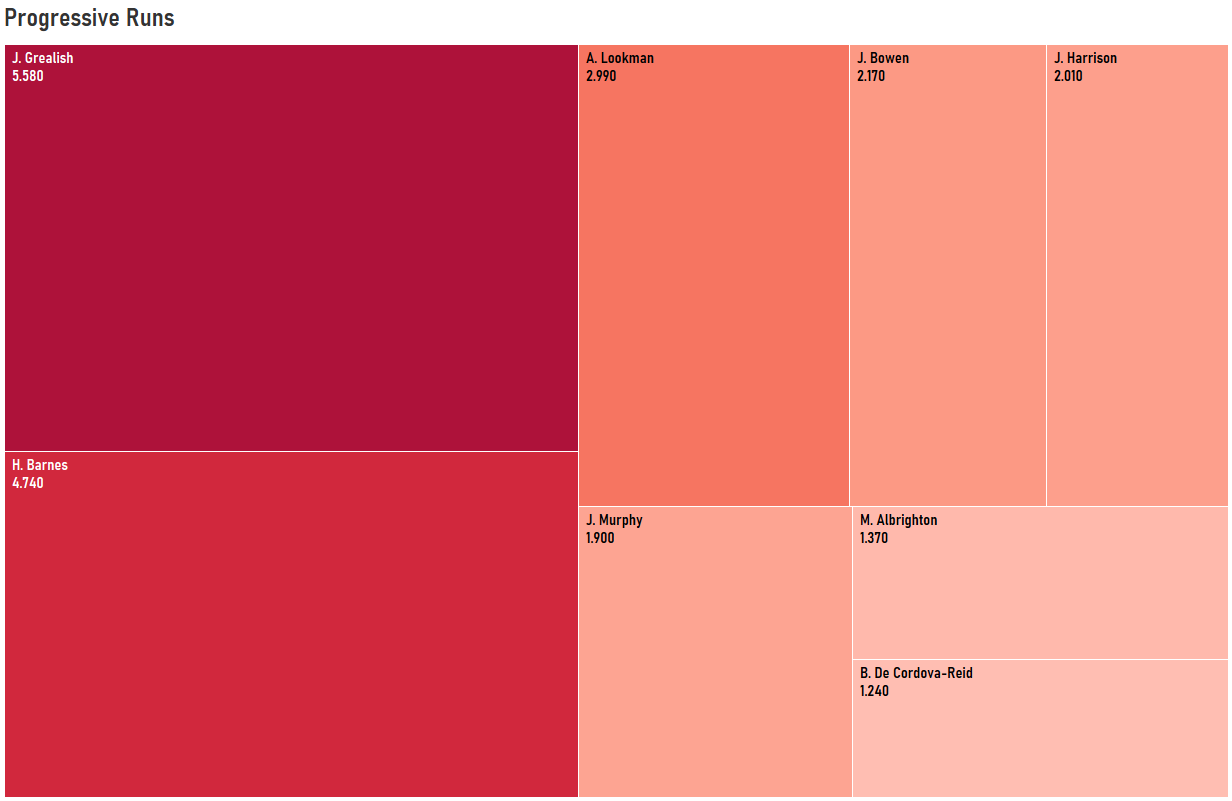 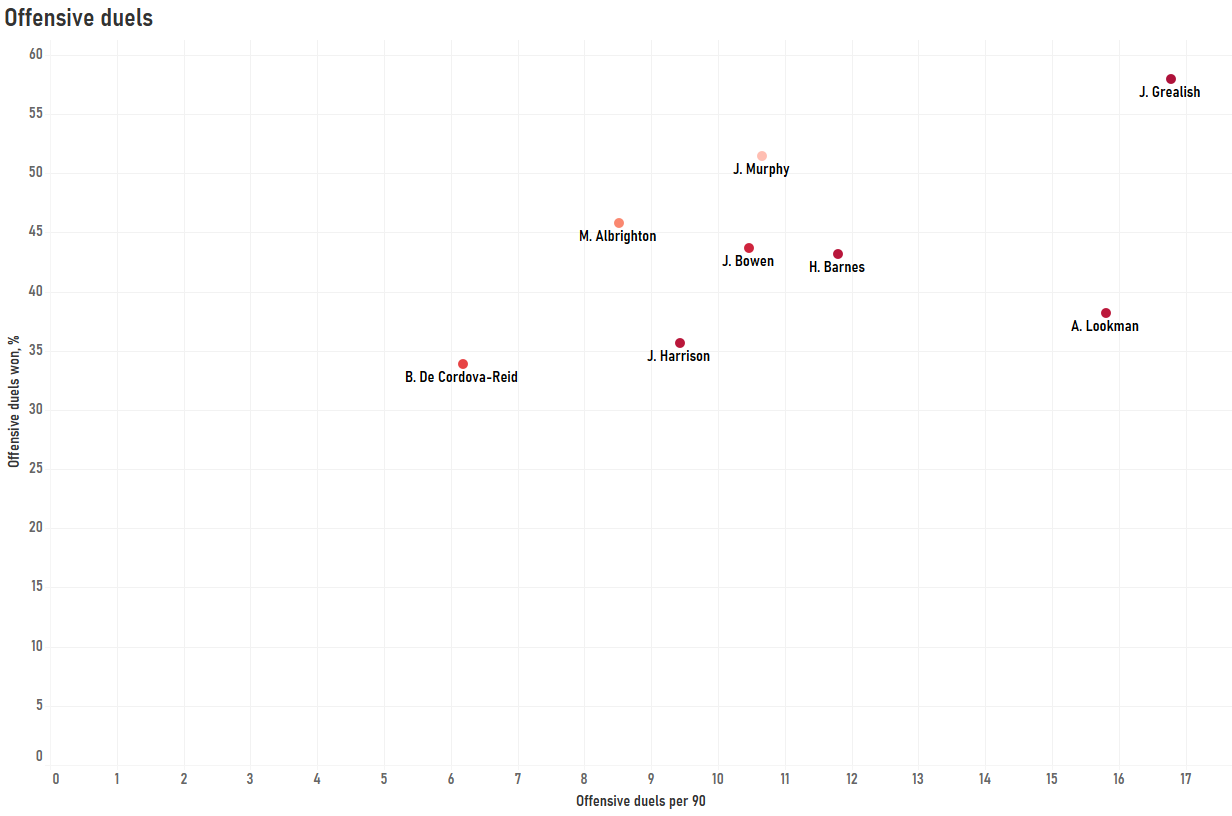 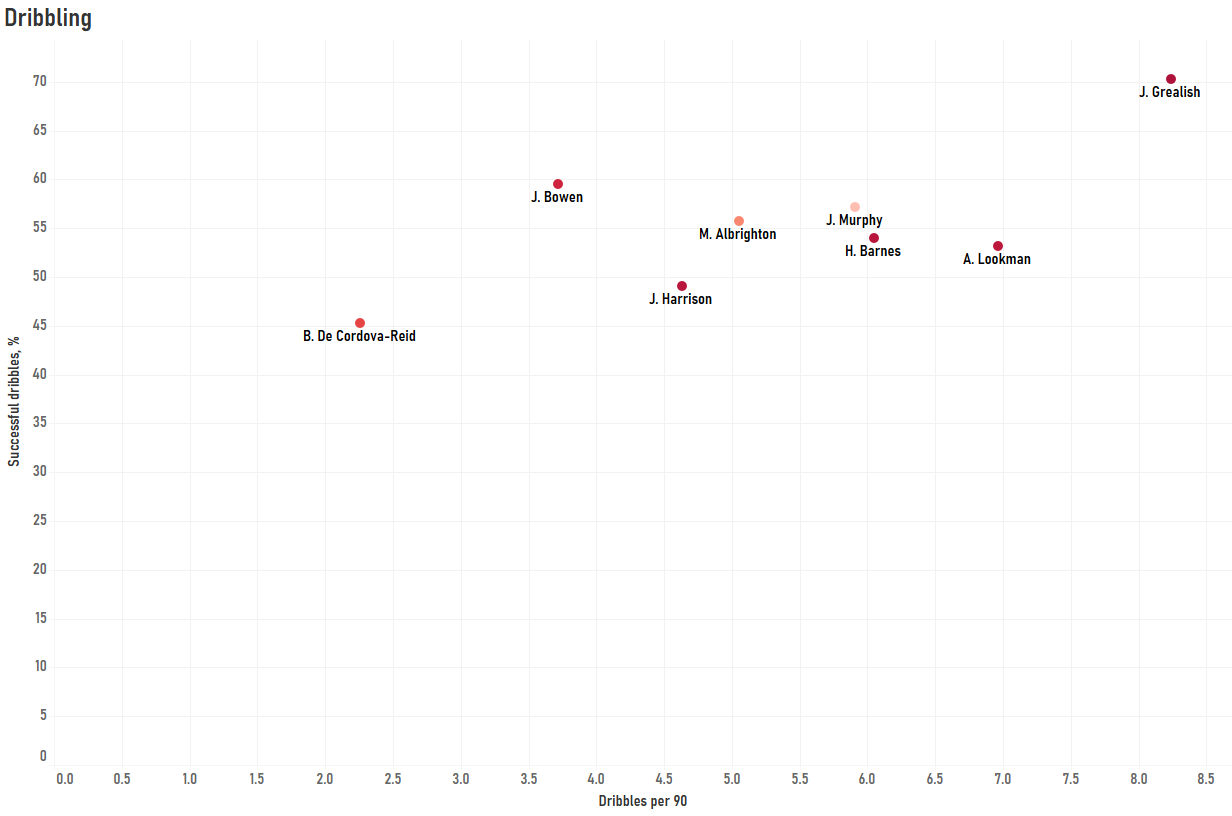 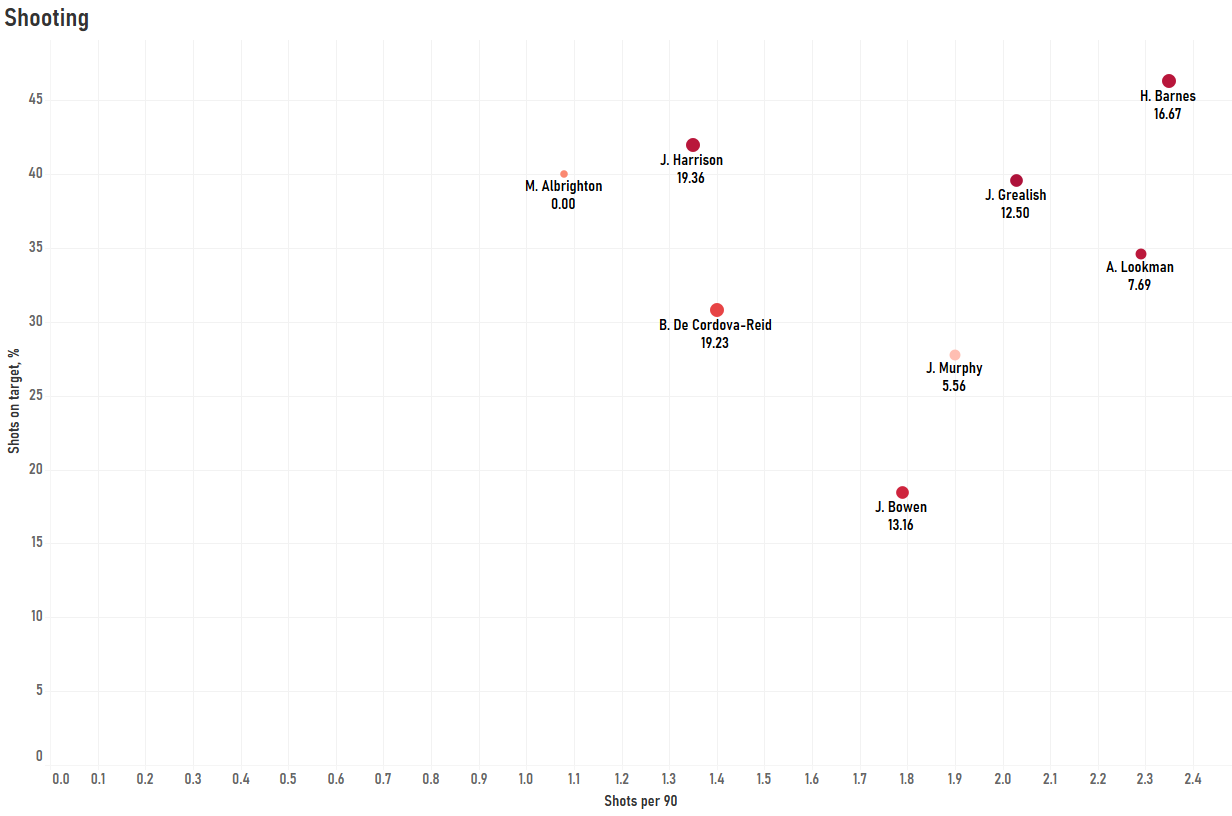 Our final attacking metric is shooting and it is the first metric that Grealish fails to top. Barnes 2.35 shots per 90 along with a 46.3% shot on target percentage sees him top both metrics, along with a good goal conversion rate of 16.67%. The Leicester man has found a purple patch of form and his shooting ability is clearly the best out of the group. Lookman is next in terms of volume, with 2.29 shots per 90, although only 34.62% are on target and his goal conversion rate of 7.69% is poor.

Grealish is only third on the list, with 2.03 shots per 90 and 39.58% of them being on target. His conversion rate of 12.5% is decent as well. Bowen has an interesting case, however, taking 1.79 shots per 90 with 18.42% of them being on target. His goal conversion rate of 13.16% is then impressive, showing that he seems to score often as long as he hits the target. However, he does not do that very often, unfortunately. De Cordova-Reid and Harrison are by far the more clinical wingers on this list, with goal conversion rates of 19.23% and 19.36% respectively. They do not rank very highly in terms of volume but fair decently in terms of shots on target. 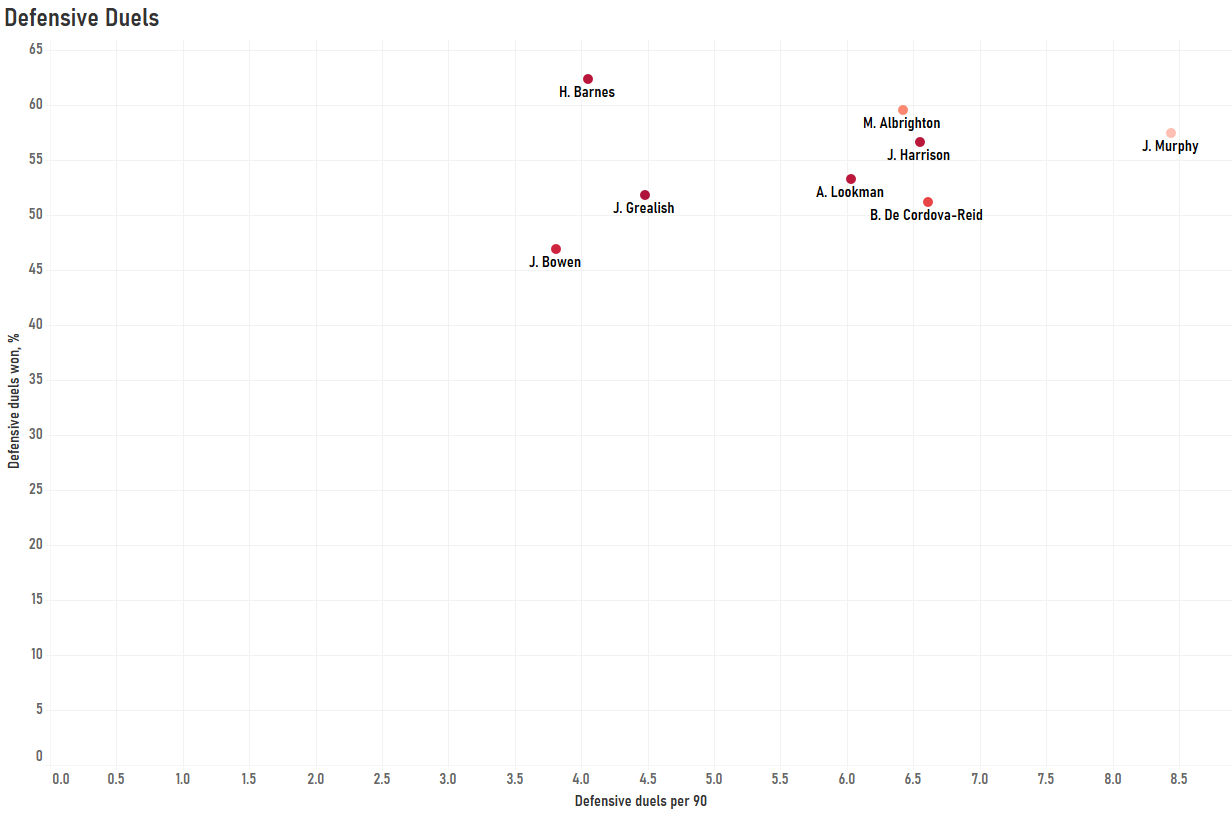 The others do not fare pretty well and find themselves lower down the order. 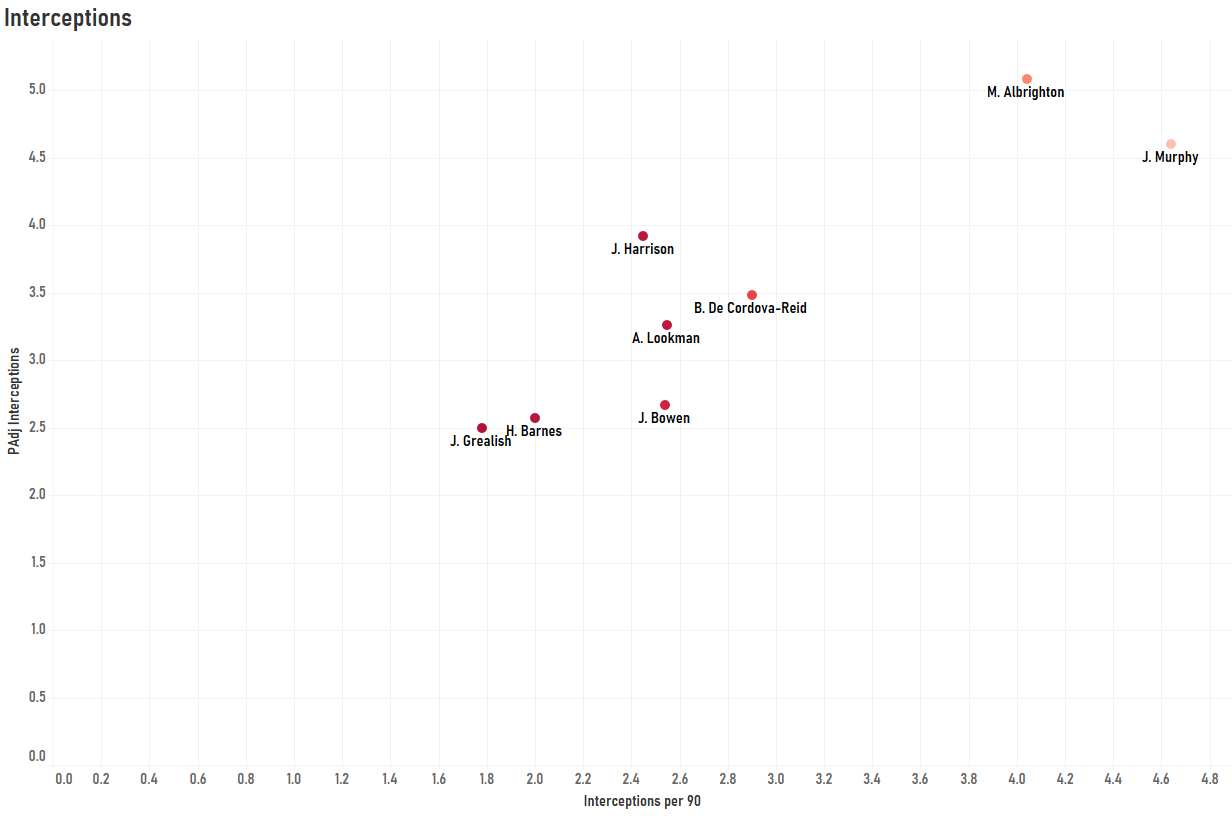 The rest all well behind, with Harrison the leader of the trailing pack with 3.92 PAdj interceptions. The likes of Barnes and Grealish, who performed fairly well in the attacking metrics, rank bottom here. With this, we conclude our data analysis and shall move on to identifying the top players.

If it already wasn’t clear enough, Grealish is the standout performer on this list, dominating most of the attacking and passing metrics. The Aston Villa captain has been on another level this season, and if calls for him to start for England were loud last season, they are even louder now. Grealish has continued to impress and has made Gareth Southgate’s decision all the more difficult heading into the Euros.

However, it would be unfair to stop with him and not look at the others either. Barnes is another interesting player who is arguably the best of the rest of this group. He has chipped in with crucial performances as Leicester fight for second in the table and continue their push for Champions League football next season. Barnes has found his purple patch of form and after having been called up to the England squad late last year, he may just be an outside contender for a spot at the Euros.