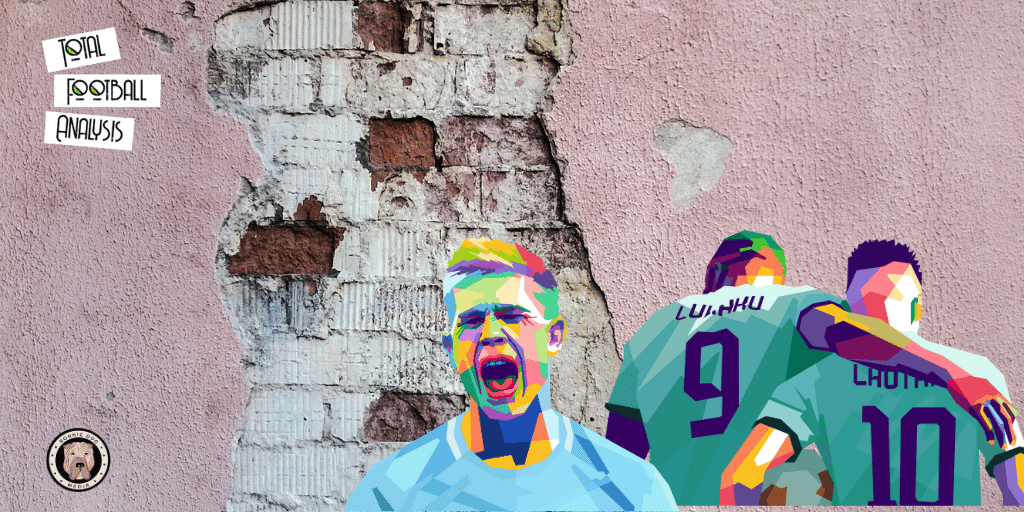 A topic that is very rich in detail and coaching points for coaches working with elite youth to the highest level. The very heading itself ‘crossing’ and ‘finishing’ is made up of two words, which by there own right are technical components. Establishing the priorities is paramount for such a topic, such that understanding that the technical supersedes the tactical element is vital when a coach brings his ideas to the training ground. The player’s technical proficiency in executing different cross types and finishing off of one-touch will give the coach licence to go deeper into this subject.

Attacks generally graduate into the wide areas in football, attacking from wide areas along with crossing is in the DNA of the game. Whether crossing into a potential goal-scorer is a primary or tertiary part of your teams’ style of play, identifying the window of opportunity and having the ability to execute with accuracy is crucial. Below we highlight the various technical and tactical aspects to successful crossing and finishing. Formations and style of build-up play can differ from team to team, here we focus on the key characteristics that are present in any team that get success from crossing.

For every position related to the cross and the subsequent attempt on goal, there are unique qualities attributed to each player depending on their position. For the crosser of the ball, whether that be a winger or a full-back, we can account for a few technical and tactical capacities. Tactically, the player must have positional awareness and quickly take up the best position to deliver an effective cross. Sometimes wingers and full-backs will stay narrow, this would be in times when they can receive a pass and still have the time and space away from pressure to deliver a cross. Typically narrow crossing positions are a result of good counter-attacks or penetrating passes made into the half-space behind the opponent’s defensive line.

Should a crosser opt for a wider crossing position, then with sufficient distance away from his or her immediate defensive pressure the crosser must start wide such that when receiving the ball they are facing forward and slightly in the view of the attack. The crosser should take a view of the opportunities ahead of the cross relative to the opponent. To decipher based on the organisation and position of the opponent as well as of his or her own teammates where best to aim the cross. Technically, perhaps this sounds like a cliché, but a good first touch cannot be overestimated. A first touch that offers the opportunity for an excellent cross on your second touch along with the angle and opportunity to deliver is the primary aim. 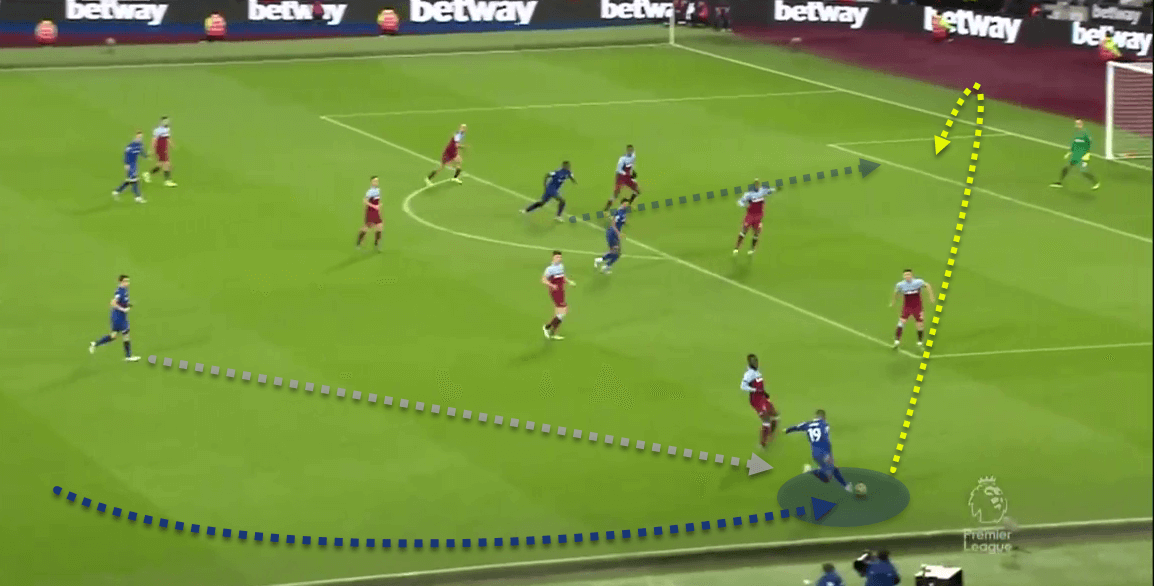 In the image above we see Djibril Sidibé for Everton deliver a dangerous cross into the box for Moise Kean to attack. In this moment, Sidibé starts in a wide position away from the defender such that he has ample opportunity to control the initial pass and deliver a cross into the box. Sidibé’s first touch is good, allowing him to look up and measure an accurate cross before he is under pressure. The Everton full-back has played some excellent crosses this season and has a significant assist record due to crossing ability.

When we speak of striker movement in relation to crosses depending on the moment in review the guidance may vary. It is the slightest details in timing and movement that make all the difference for strikers. Generally, by principle strikers will want to have good movement and have the ability to meet a cross perfectly on their run, such that they evade the defender and simultaneously beat the defender to the ball to finish on one-touch. One principle we can establish is that good strikers know the importance of the goal-mouth. Connecting with the ball between the posts is fundamental to attacking success. Should the striker drift slightly wide of the goal then the angle to convert is more acute and the chances of scoring are dramatically reduced.

Secondly whether working in pairs or as a lone striker, crossover movements allow the attacker meeting the ball to lose their defender and arrive in a better scoring position when they connect with the ball. This means if the attacker is on the same vertical line as the far post to the cross while on the edge of the box, he can then make a diagonal run forward towards the front post. Such that he has got in front of his defender and has a better chance to meet a cross at the front post without any pressure momentarily giving him a better opportunity to convert. A final point to emphasise, ‘body shape’. Naturally, players will remain square to their view. If the player slows their run they will take a front-facing view to the point of the cross. The body shape has to be trained, such that the body is angled 50/50 to the goal and the ball. This is to allow the vision of both the ball and the goal as well as to allow the player to convert effectively.

In the above image, we see Everton’s centre-forward Dominic Calvert-Lewin lose his defender to meet the cross about to be delivered from his teammate and score. If you follow the journey of his run into the box you will see Calvert-Lewin attacks the vacant space between the width of the posts, not before the young English striker moved to the defender’s blind side with a quick change of pace.

Calvert-Lewin’s lateness in this change of angle was key to his success, as had the striker made a straight line run from outside the box across to the goal we may well have stayed in the defender’s vision and made himself easier to defend. This way, the sporadic movement behind the defender moments before the cross was key to creating and executing a chance on goal.

Regardless of the formation, for the team in attack, the cut-back options and second ball contest are usually reserved for the central-midfielders. Central midfielders need to make themselves available as an attacking option and be prepared for a ‘cross & no-finish’ as there is high value in the second ball.

The cut-back option is mainly a realistic option on low-crosses or crosses at a shorter distance. Like most targets in the box, the central-midfielder or player occupying the cut-back option is generally an option for a short window. Therefore the crosser must also identify and use his or her advantage wisely. As for crosses that are not converted, the central-midfielder on the edge of the box must try to first create another attempt on goal or If denied re-circulate the ball away from pressure to allow another crossing opportunity. In the transition to defend the central-midfielder must apply pressure to the opponent in possession immediately. Not only to deny a counter-attack but in the hope that they may regain possession and create another chance to convert from.

In the image above we see Manchester City mount a good attack along the left side inside the opponent’s box. David Silva who is in possession is about to deliver a cross to the awaiting strikers. If you see the three Manchester City players outside the box reserve their option to run into the box. This is because in reading David Silva’s options as well as the cut-back option being neutralised by the Crystal Palace central-midfielder the point of making the run is redundant in this phase. Still in keeping with their precaution and anticipation central-midfielder Kevin De Bruyne, right-back João Cancelo and left-midfielder İlkay Gündoğan maintain a high but low-pressure position to meet the loose ball otherwise to deny the opponent an opportunity to transition to attack.

The training session below is a three-part session on Crossing & Finishing.
In this session, it starts as a closed technical practice, all unopposed to help the players establish the principles and get some success. Gradually we introduce the Goalkeeper and then defenders.

Work at the pace of your team’s progress and do not force the progressions if the players are not ready, players must be allowed to own this aspect of their game and develop their confidence in it. This session is designed around the 4-4-2 formation however its principles are mutual to most formations. 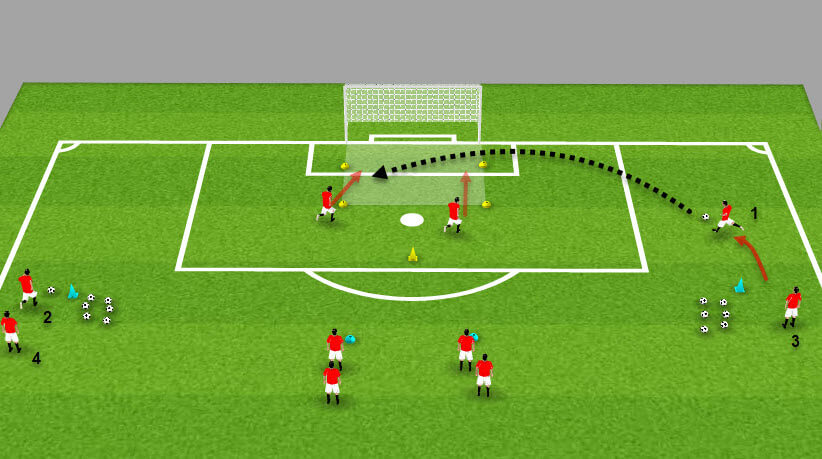 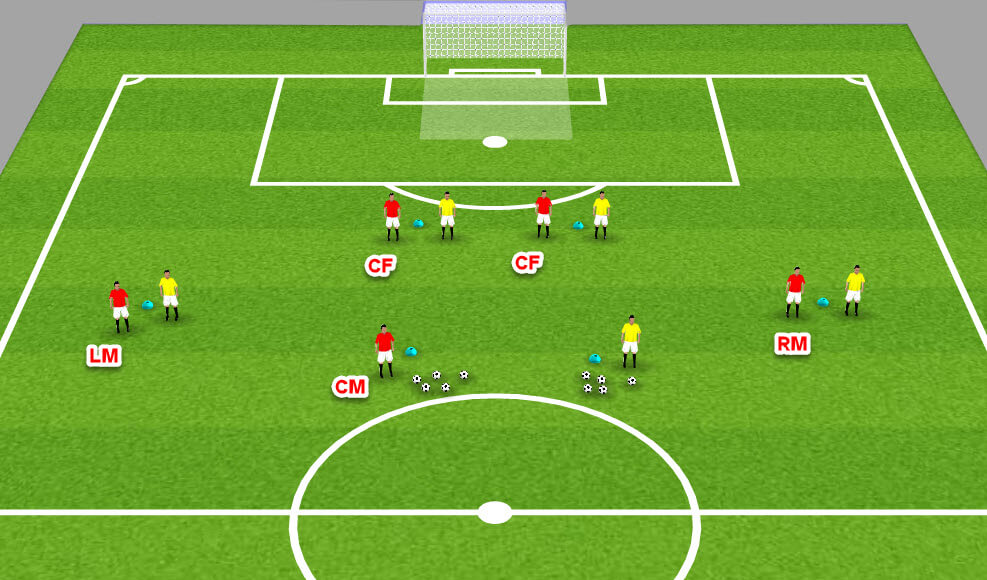 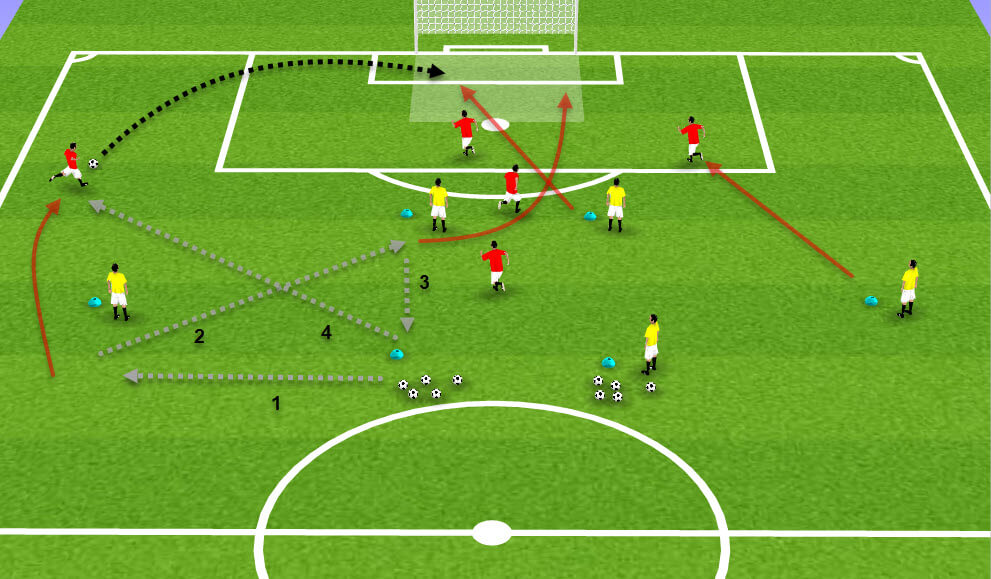 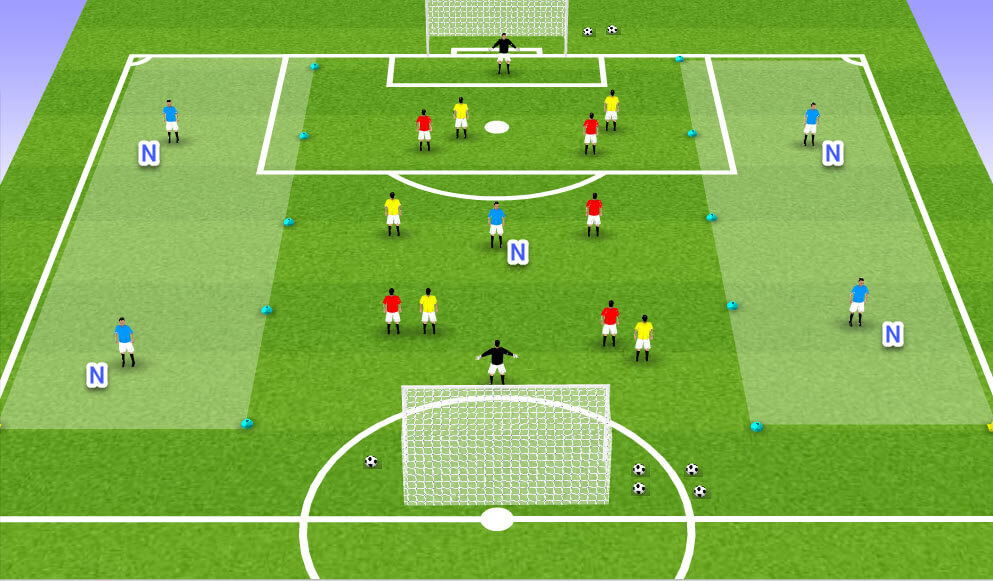 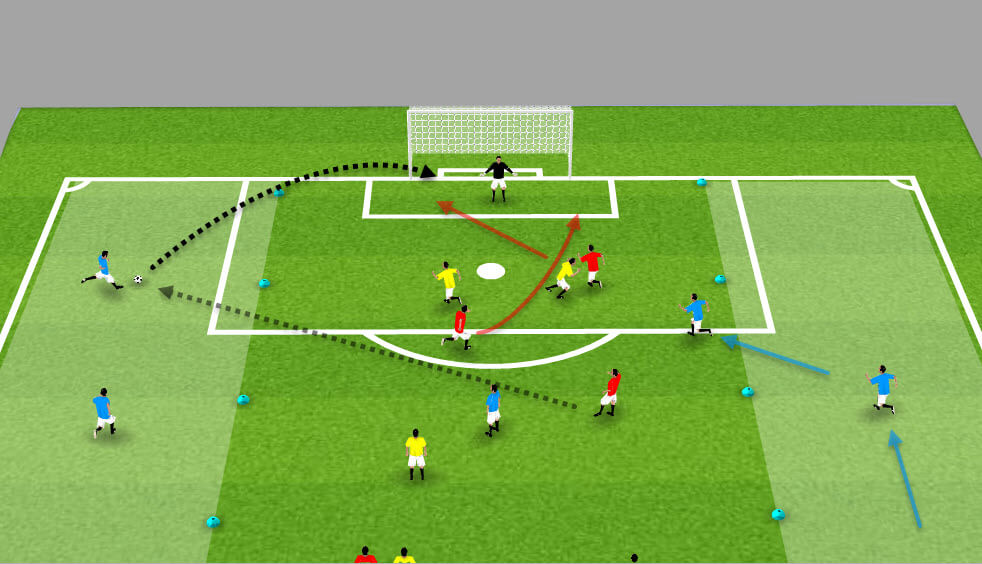 To get success in this topic, it may take some time. Allow the players to enjoy it and own it, yes the topic will offer a coach many chances to step in and coach, however, try to limit your stoppages to the bare minimum unless there is a repetitive gleaning error. Players will learn from their mistakes if we let them allow the players the opportunity to discuss and share in their groups during and at the end of each session what they were doing right and what they can do to improve in certain aspects.

There is a high degree in skill involved in each component to crossing and finishing, so long as we take care of the technical capacities first the tactical aspect will follow with ease. A useful strategy with players is to give them targets of improved conversion rates in the unopposed practices and games over a course of time. Whether that is seeking marginal improvements in the same session or improving conversion by 10-30% over the entire training block is at your discretion.