It was the talk of the town when Hugo Boumous left Mumbai City to join ATK Mohun Bagan in the summer. The player, without any doubt, was one of the best foreigners in the Indian Super League and also had a mammoth influence on Mumbai City’s title-winning season. Cássio Gabriel is the player chosen to fill in the void left by Boumous.

In this scout report in the form of tactical analysis, we’ll analyse Cássio Gabriel’s performance so far this season and see whether or not he’s been able to create the same impact that Boumous had on the team last season.

Cássio Gabriel, aka Cassinho, is a 29-year-old attacking midfielder with a wonderful skill set and the ability to add creativity in the final third. The right-footed player stands 176cm tall and began his professional career for Fluminense. In 2013, the player spent one year on loan in Croatia with Hajduk Split. Now, Mumbai City is his second destination outside Brazil in his career, as the player has spent most of his professional days in his native country. 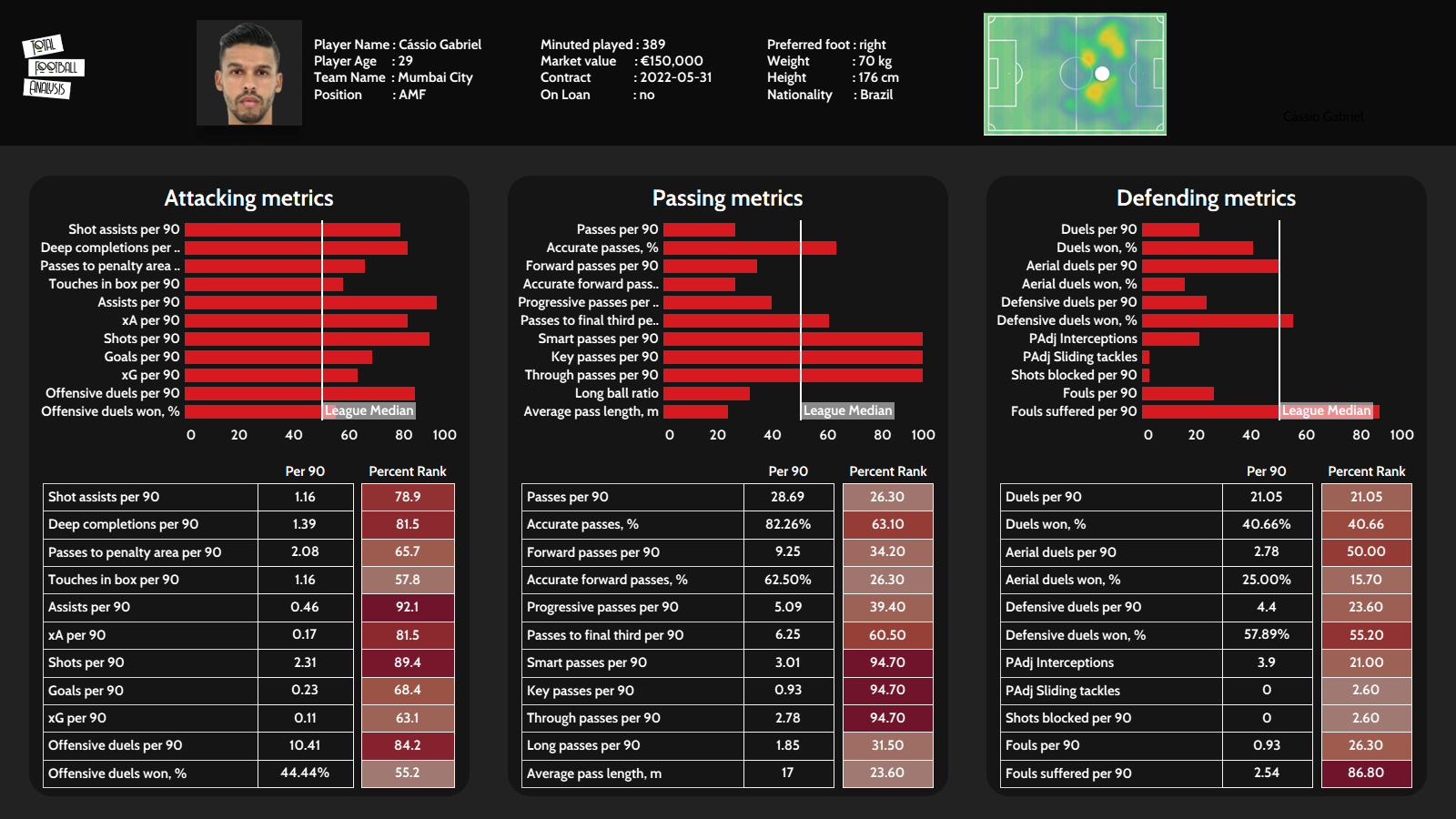 So far, he has played 389 minutes for Mumbai City and has been in the starting XI for all their matches. On looking at the player profile, we can easily say that the player’s numbers are impressive in the attacking phase of the game. He has an average assist per 90 of 0.46 and a goal per 90 of 0.23, which is really good. The player is also dominant in other attacking metrics.

He has high percentile values in smart, key and through passes, which ensures that the player is dangerous in the final third. His pass accuracy is also high, indicating that he’s able to execute what he wants perfectly.

In the upcoming sections, we’ll see how Cassinho has been vital this season for Mumbai and also look at areas where he plays a crucial role. We’ll look to compare this with Boumous’ numbers from this season and try to answer the question ‘Have Mumbai found themselves the right replacement?’. For the ease of identification, Cassinho will be in red and Boumous in yellow in all the scatter plots used and the data includes only players who have played a minimum of 150 minutes.

It’s important to note that in this analysis all the data used is right at the time of writing this piece and the actual data could have changed when you are reading this.

Influence in the final third

In his last five games for Mumbai, the player has recorded two assists and one goal. However, the truth is that these final output numbers don’t justify the impact the player’s made for the team in these five games. 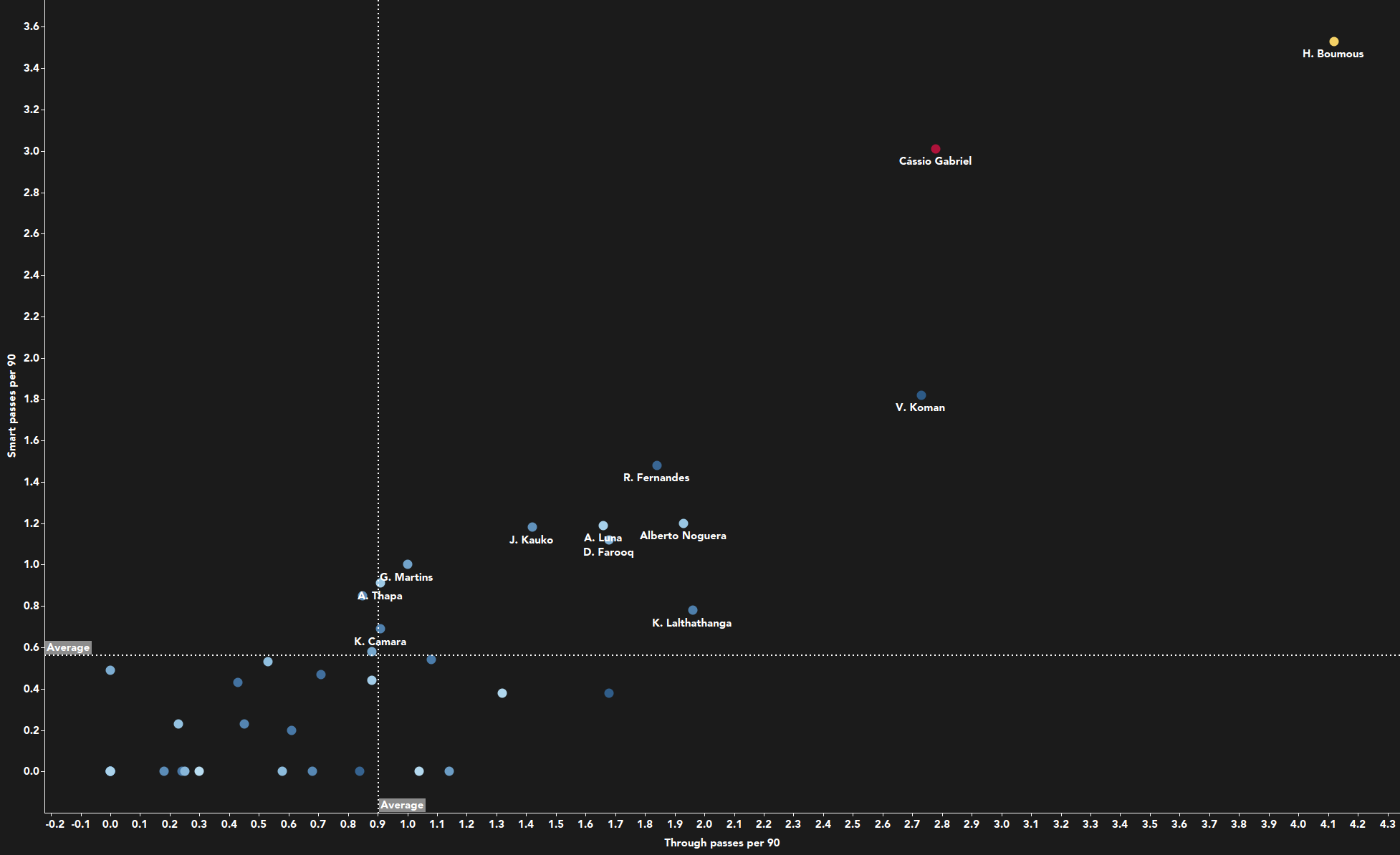 In the scatter plot, which depicts through passes and smart passes per 90, we can clearly see Cassinho has been impressive and stands second in both these metrics with an average of 2.78 and 3.10 respectively, falling just behind Boumous who is currently the best in these metrics. But taking into account the experience that these two players have had on Indian soil, it’s remarkable Cassinho has managed to produce these numbers in just five games.

The coach relies on his creativity in the attacking third, his vision and also his technical strength. One of Cassinho’s greatest assets is that he has a wonderful vision but also the ability to execute it. Equal credit goes to Igor Angulo, who is able to complement his passes and keep making runs to bring out the best in Cassinho. 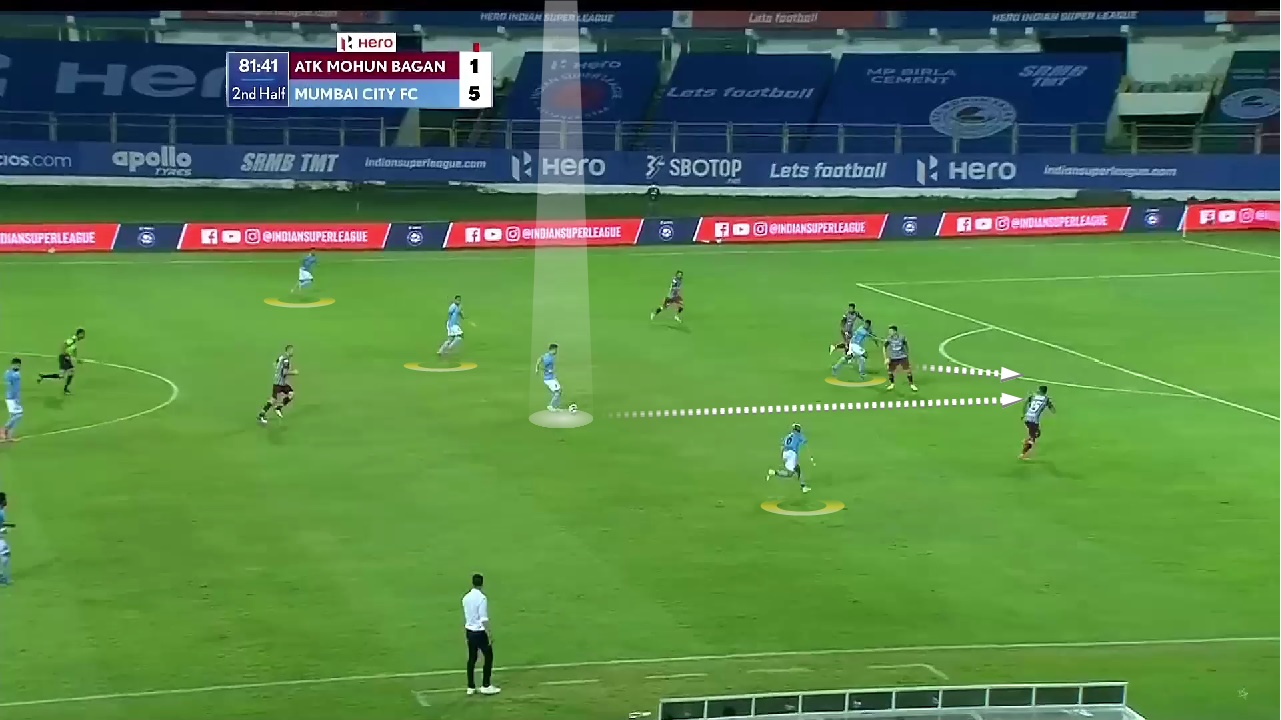 In this match image, we are able to see how Cassinho looks to play the best pass available on the pitch. He could have easily opted to pass to any of the three free players available, especially when the team was winning 5-1 against ATKMB. But rather, we can see that he opted to acknowledge the run from the attacker and he also timed the pass perfectly so that it did reach the striker. He has an overall pass accuracy percentage of 82.26%, acting as proof of his execution ability.

Apart from his threatening passes, the player also constantly attempts to score goals by taking shots, indicating that his passing is not his only weapon. 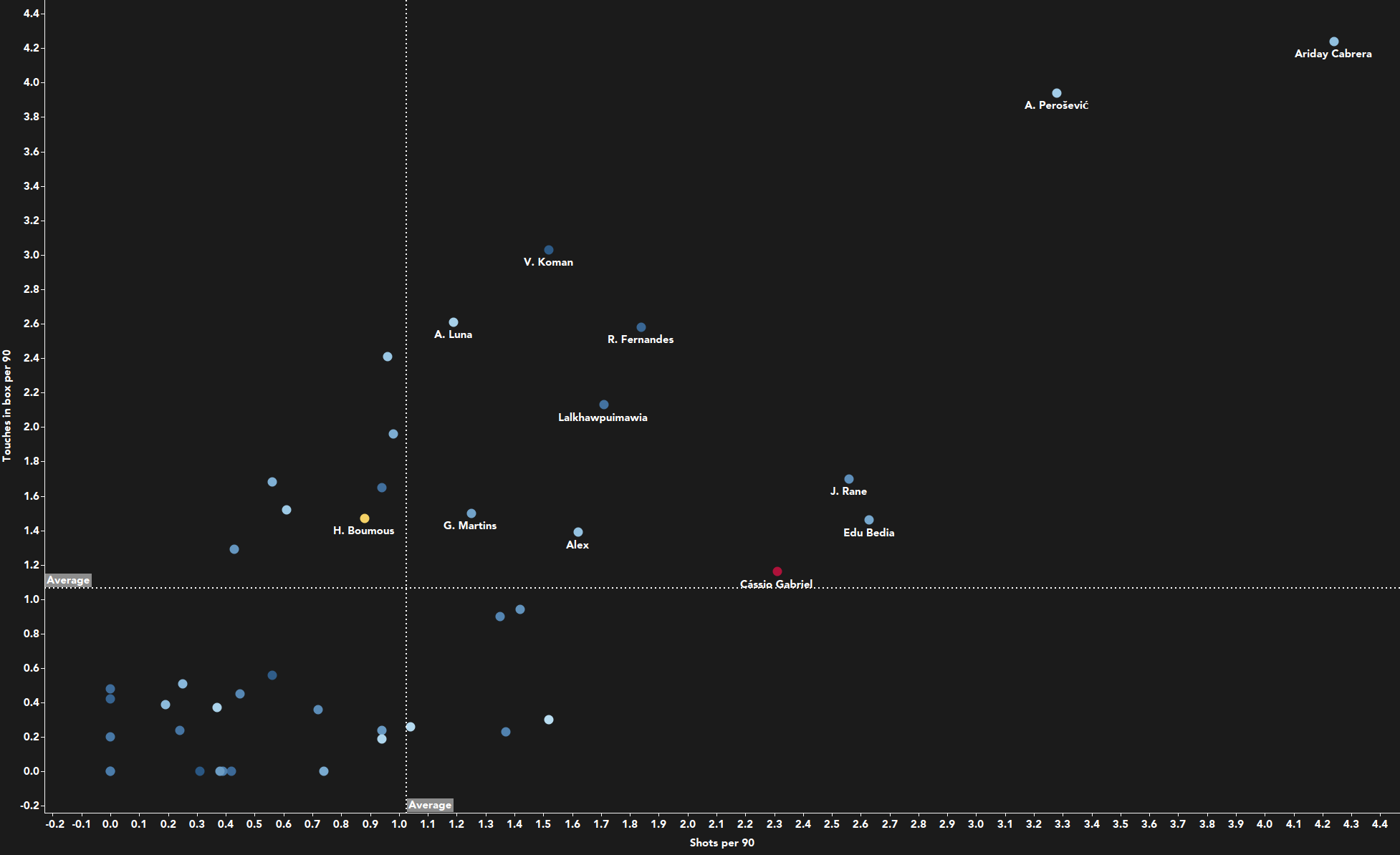 Again, the reason for this is the player’s vision and ability to make decisions. Cassinho is very clear on his roles and also knows how he can impact the flow of the game. At the same time, he follows the tactics laid out by the coach. In short, he acts as a wonderful bridge and plays a vital role in connecting the defensive play and the offensive play.

Acting as a bridge

He is one of the most vital players in the attacking phase of the game. One can easily figure out the fact that the player has a wonderful understanding with his strikers and defenders. In any given situation in the build-up of play, the players are easily able to find Cassinho in space. This is because of Cassinho’s ability to identify and occupy space. 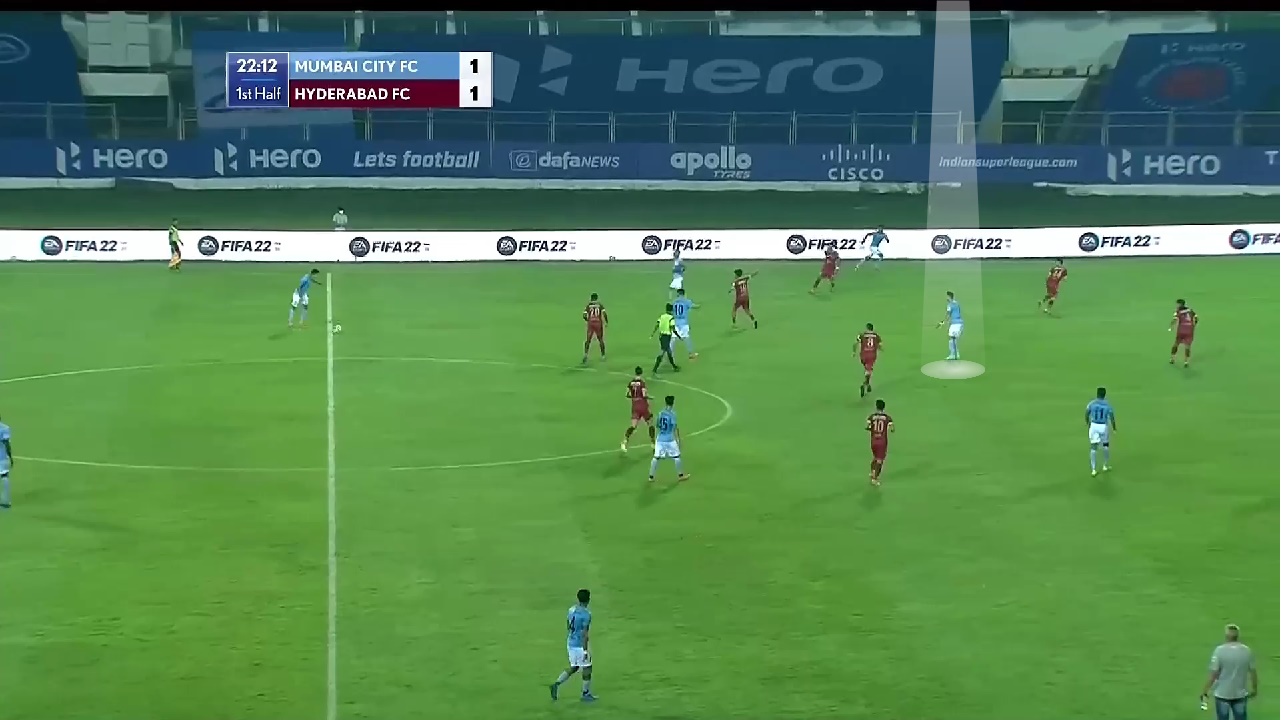 His ability to play in between the lines is the major reason why the player is able to position himself in space the majority of the time. In the match image, we can see how free he has positioned himself right in the centre. Equal credit goes to the coach’s tactics, which have them outnumbering the opposition by pushing up the fullbacks into the attacking third. Due to numerical superiority created by Mumbai City, Cassinho is left unmarked the majority of the time, giving him enough space and time to create a threat.

On the other hand, the player also has the ability to read the game. When he sees no opportunity to progress, he drops back to help in the build-up, and at times, makes quick sprints into open spaces asking for a pass in difficult situations. 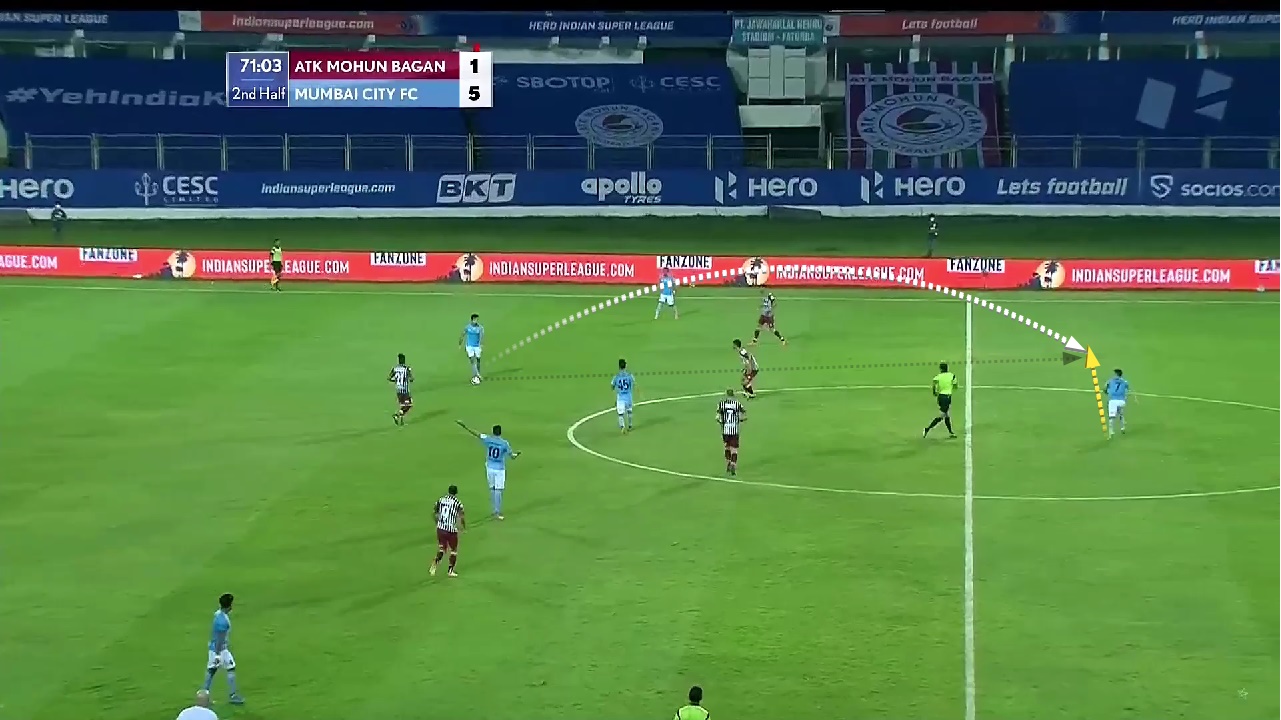 Upon realising that his passing lane is blocked by the opponent, he’s quick enough to move into an open area to ask for the pass. His presence in the mid-third is what really makes the progression of Mumbai City look flawless and on point. It’s also because of the understanding that the player has developed with his defenders and attackers in such a short time. These runs are often made by him on the flanks at the time of throw-in. Upon receiving, the player now perfectly executes a final pass, creating some very good attacking moves in the attacking third.

One of the player’s best assets is his ability to dribble. He possesses good pace and skill to dribble, and the player uses this ability of his wisely. Depending on the situation, he uses it to progress the ball, exploit a free space or, at times, to attract defenders to open up space for the wingers. This also helps him in taking down the defenders. He averages 3.93 dribblers per 90 with a success rate of 58.82%. This influence can be seen in his offensive duel ability. 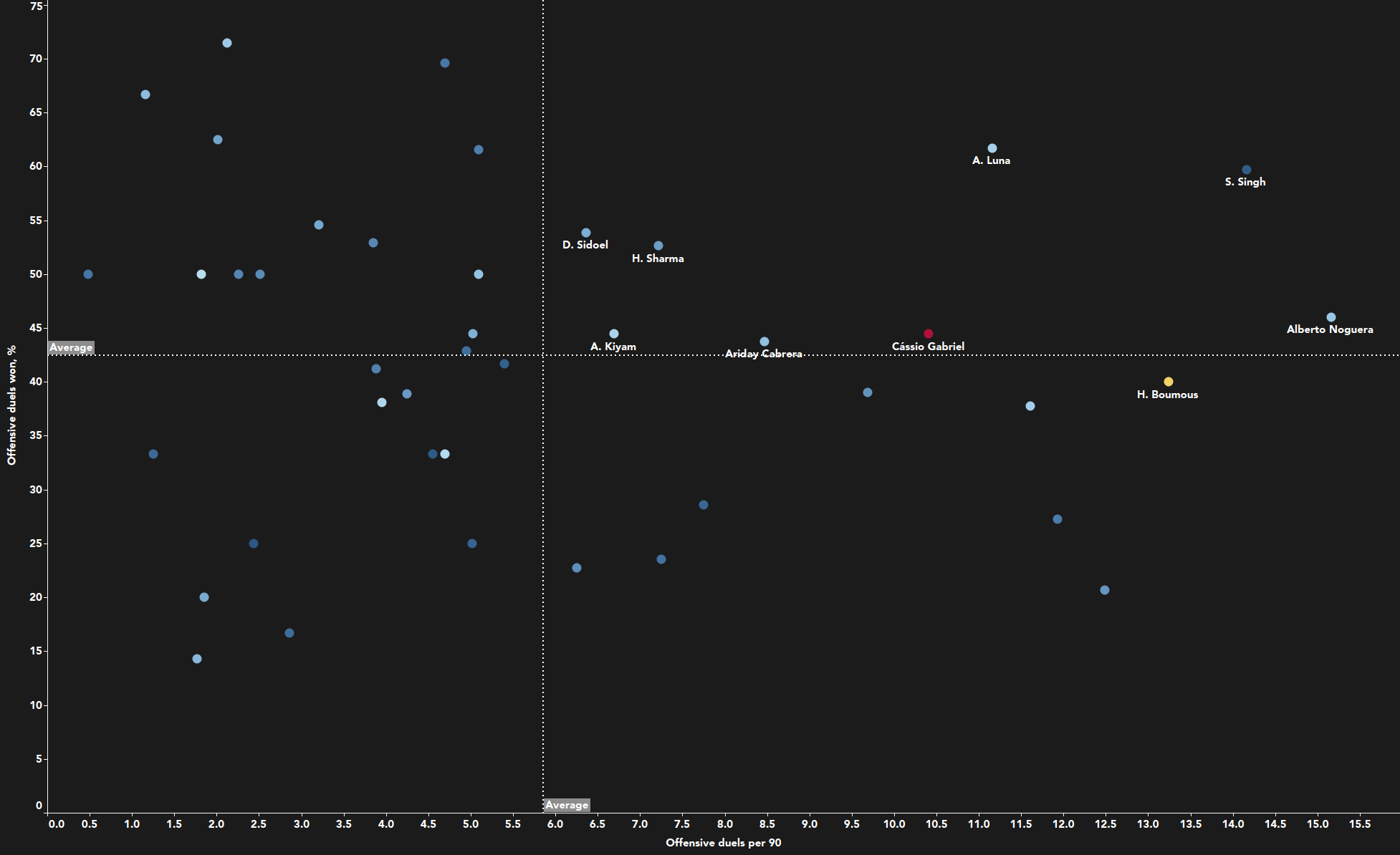 Cassinho is among the few who have made it above average in both involving himself in an offensive duel and also winning them. He averages 10.41 offensive duels per 90 with a success rate of 44.44%. He has the highest offensive duel involvement within the Mumbai City squad, indicating that the player has taken up the responsibility of taking down the opponents. 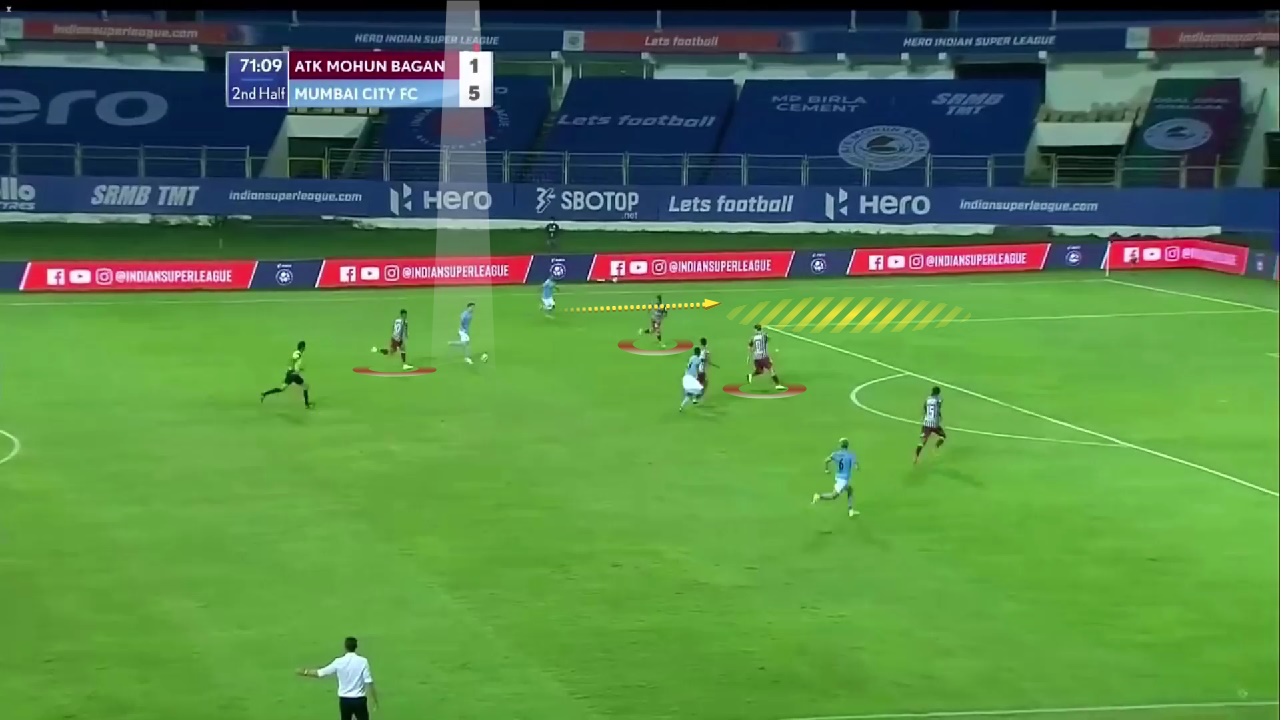 Upon progressing, we can see that he tends to attract opponents. A defender is trailing behind Cassinho while we can see that the fullback also converges inside to avoid the through ball and stop his progression. The highlighted centre-back too will now move towards Cassinho but this is where Bipin becomes dangerous. The space created by the fullback will now be exploited by Bipin, who is one of the fastest in the league. Since the supporting centre-back has halted his run, it’ll be difficult to close down Bipin the first time.

Every footballer has their own strength, but Cassinho stands out because he knows how to utilise these strengths to benefit the team; it’s as if the player has been part of the team for many years and doesn’t look like his debut season in India. 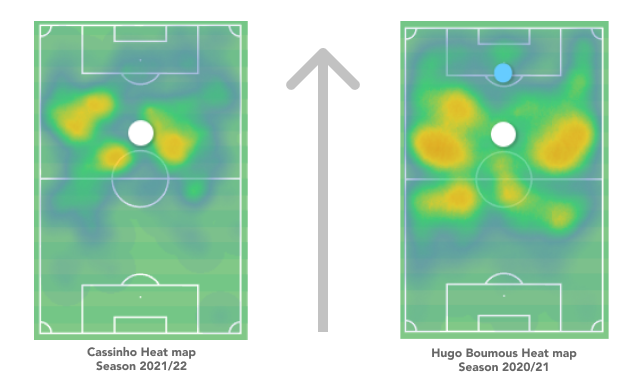 On comparing Boumous and Cassinho, first and foremost, we shall look at the areas in which they operate. On comparing Cassinho’s heatmap from this season to Boumous’ heatmap from the previous season, we can see they tend to operate in similar areas.

Next, we’ll be comparing these two players in terms of data. Although it’s too early to compare their numbers, this can give us a fair idea of how these two have performed this season so far. On the radar, the percentiles are calculated among the other midfielders in the league who have played a minimum of 150 minutes. 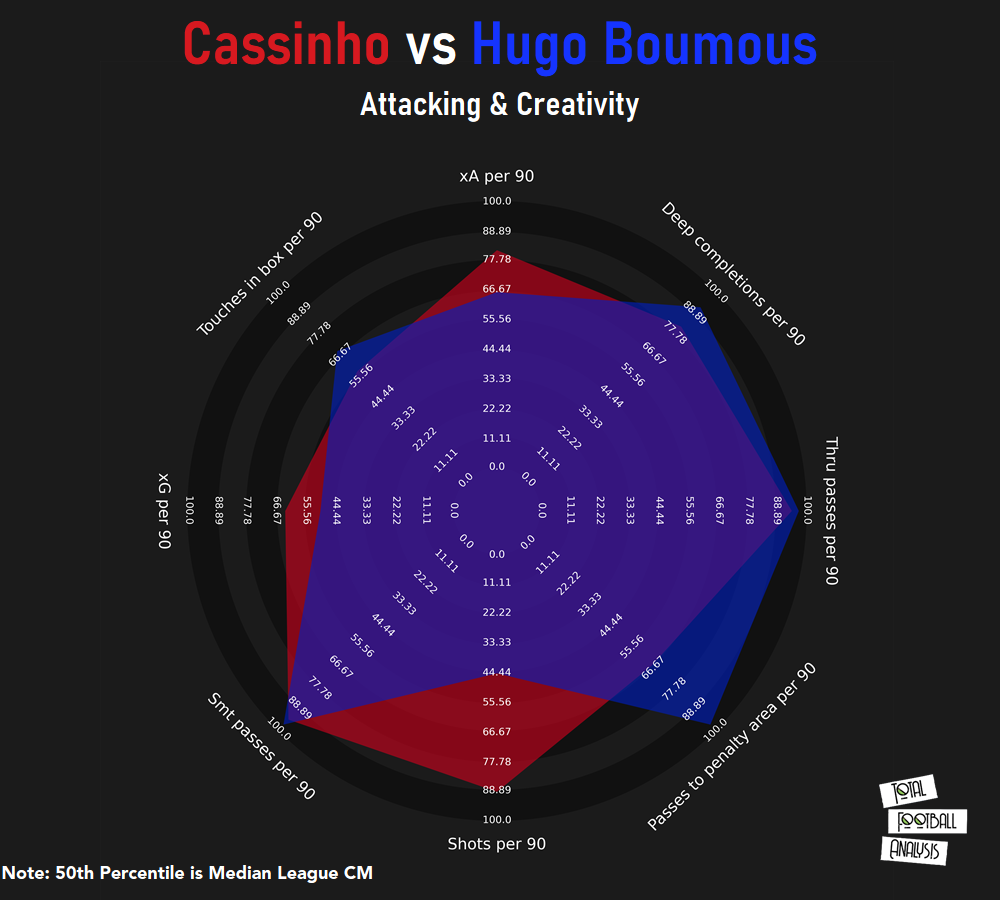 On comparing these two players’ attacking metrics, we can see that they have performed similarly so far this season. Boumous looks to have made more passes than Cassinho into the penalty area and also has made slightly more touches than Cassinho inside the penalty area. Whereas Cassinho has better percentiles in shots per 90, xA per 90 and xG per 90. On a whole, these two players have performed relatively similarly with no big differences.

Cassinho surely is the driving force for Mumbai in the attacking third and perfectly fitted into the void left by Boumous. He has been able to create the same impact so far for the team and has been performing consistently which is impressive. Equal credits to the players and the coach, Des Buckingham, for bringing out the best from the player.

With so much expectation on his shoulders, one thing that we can be sure of is that Cassinho will likely only become better with each passing game and will surely go on to play a vital role this season for the islanders.