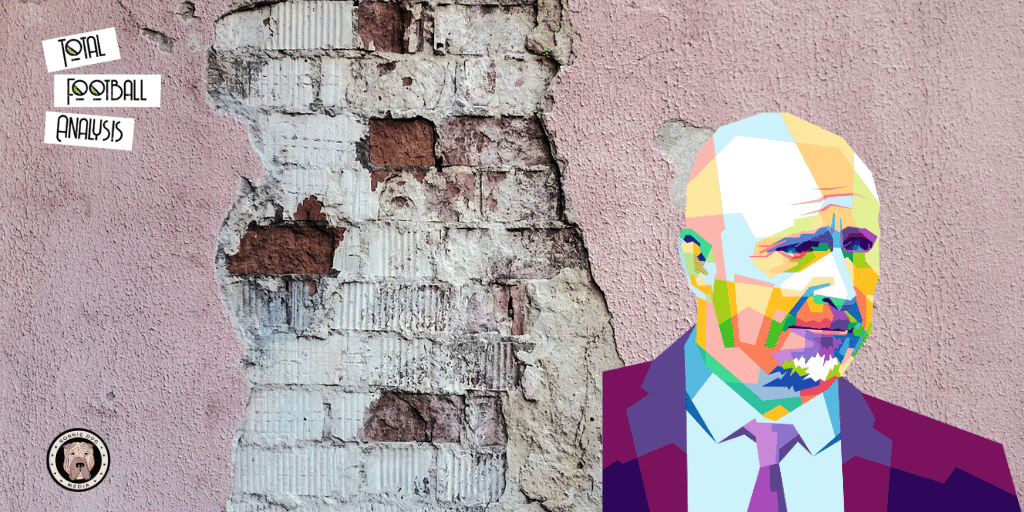 The 2019/20 season in Serie A has been an exciting one so far offering some surprising contenders for the European football spots and having a pretty tight fight for the leading positions. A team that started surprisingly well are Cagliari, who have arisen from 15th place last year to contending for the top-six this term. Buying Radja Nainggolan from Inter turned out to be their best decision and combined with some clear strategy it resulted in some impressive wins in the first half of the season.

It wasn’t until the mid-December when the team started to look tired and out of ideas, resulting in a noticeable drop in results, despite there being no noticeable drop in their overall performance on the pitch. With the new year on the plate though, they started showing inconsistency and some negative patterns appeared.

This tactical analysis in the form of a scout report aims to look into the reasons behind Cagliari’s drop in performance as well as into the manager’s ability to use analysis and find a solution to the current situation.

Going into the second half of the season, the physical factor started to appear, especially in teams with consistent starting XI’s. One of these teams are Cagliari. The coach Rolando Maran relied on pretty much the same starting XI in every game, which combined with the lack of squad depth starts to affect the team’s performance. Competing against teams that not only have fresh players to come off the bench but are equal in quality of starters becomes really hard.

Their tiredness and the lack of versatility hit hard on Cagliari’s attacking performance since there are no options upfront. The attacking duo of João Pedro and Giovanni Simeone has been responsible for converting the chances into goals since the start of the season, without any particular player to replace them and give them some time for rest. Pedro has been a starter in all 21 games in Serie A so far, followed by Simeone, who has taken part in 20 games. Whilst the Brazilian is the top goalscorer with 13 goals yet, his teammate has struggled to take advantage of his opportunities and has scored five times, experience troubles in creating goalscoring opportunities at all.

What made the difference throughout the campaign is the immense amount of shots that the team executes, which has tortured their opponents to exhaustion. Having the support of the full-backs and the impressive contribution of Nainggolan allowed the team to attack both using the flanks and through the middle, managing to expose the opposition. Using crossing frequently when working in the flanks and sending long balls behind the defence when attacking through the middle has been effective enough to allow them to become one of the surprises in the league this term.

With the second half of the season’s start, though, their explosiveness and focus upfront decreased with a few factors that affected their attacking performance. The lack of options on the bench, the lack of creativity and in-game changes (which made them pretty predictable) and the drop in quality of individual performances both in midfield and attack resulted in them being defeated in five of their last seven games.

They kept their consistency when it comes to creating shots, but their accuracy decreased especially against teams that employed considerably high defensive lines and compact shapes. That’s a result of their slightly changed strategy when it comes to possession. They tried to control the tempo and retain possession for longer periods of time, which took from their explosiveness and isolated the attacking players, forcing them to drop deeper frequently to be able to get the ball. Their tendency of sending lots of long balls somehow faded away and it affected the way they perform in the final third.

The poor finishing has decreased their efficiency on a counter, too. The team are creating four counter-attacks on average per game, with 34.1% of them ending with shots, but the poor finishing and work under pressure didn’t allow them to convert these opportunities into goals.

Overall, Cagliari’s midfield performance is solid but the individual performance of some of the players became inconsistent, which affected both their attacking and defensive actions.

One of the players that had a decrease in their performance is Nández. Due to his position as a right central midfielder, he has to be rational both in creating chances for his teammates upfront, but also providing defensive support and retaining possession.

When playing against teams with high defensive lines Nández is often forced to send the ball back which often transforms into putting more pressure on the defence, hence claiming more risks. He loses the ball in key areas quite often, which makes the midfield a breaking point for the team’s defensive ventures. The Uruguayan rarely sends balls to the final third too, leaving most of the attacking support to Nainggolan.

His regular substitution Ioniță doesn’t perform any better and he most frequently doesn’t fulfil his role coming on as a creativity outlet, who also needs to offer defensive support due to the active full-backs contributing to the attack.

The Bosnian is often challenged to be the biggest creativity source of the team, lacking support in advancing the ball to the final third. This, as mentioned, has resulted in the team being pretty predictable for their opponents. One of the regulars in the central area, Marko Rog, is Cagliari’s key man since he is the only strong passer and the main man responsible for helping in the build-up and bypassing the press along to Nainggolan. He also contributes perfectly to their defensive actions and counter-pressing. Their build-up is often troubled since their strategy and in-game changes ability are not very flexible. They experienced difficulties in switching their tactics and positioning regarding their opponents, which is a must in the competitive modern football.

Losing the youngster Pellegrini who was one of the regulars in defence due to injury in November was considered to be a huge blow for the team. They somehow managed to get over it and achieve a balance between the lines in his one-month absence. Once he came back though it was hard for him to reach a better level. Cagliari’s defensive record dropped drastically conceding two or more goals in seven of their last eight Serie A games. The left-back is responsible for many of the times the team lose possession having the worst possession loss record – 10 times on average per game.

Two of the team’s regular starters in defence – the goalkeeper Olsen and the right-back Fabrizio Cacciatore saw red in the game against Lecce which has also affected their performance. The problems started in the next game with Sampdoria where they conceded three goals and had to get back from losing positions, managing to do it thanks to Pedro’s flair and strong positioning.

The drop in Cagliari’s performance could be blamed on their huge dependency on the full-backs. Once the regular starters in that position were absent or didn’t perform well either defensively or offensively it would result in the team decreasing their effectiveness in both phases.

Their inconsistency when it comes to winning aerial duels in key areas is also an important factor in their games, especially when defending in and around the box. Six of the goals they conceded in their last nine games in Serie A were directly or indirectly a result of lost aerials and the lack of adequate reaction after them.

Rolando Maran was praised for his work at the beginning of the season, but he has failed to meet the expectations lately. The coach tends to stick to the 4-3-2-1 and 4-3-1-2 formations and switch to other ones on very rare occasions. He fails to provide different game plans against the different teams, which is also amongst the reasons for the team’s drop in performance. Their opponents are slowly finding ways to resist their attacking ventures, and it turns out that Maran couldn’t come out with an in-game decision that might tilt the scales in their favour.

He just recently took a risk and opted for a 3-5-2 set-up, including some players that are not on his day-to-day list. The team managed to get back from losing positions against Inter and secured a point, despite another unsatisfying performance by the attack and Simeone in particular. They created 13 shots and only two of them were on target, showing the importance of their frontline and being able to convert the chances into goals.

It seems like the Italian needs to work on his versatility and look more into different build-up strategies, so they are prepared to react better in different situations and against different defensive approaches. Getting some of the attacking players back on track is much needed as well, as is splitting the responsibilities between the players, instead of relying on one or two players in the most important phases of the game.

Maran needs to find a way to include more players in his plans and give them the right roles depending on their strengths. Giving a rest to the regular starters is important and giving more players the chance to contribute even more. This would give the team some options and increase their versatility. Continuing to rely on the same strategy from now on could only make it worse. Finding a new role for Simeone, using his pace and positioning in a better way, and providing stronger support for Nainggolan in advancing the ball could have an immediate effect on their performance.