With the official Premier League restart dates coming in, Arsenal will (re)start their campaign against the heavily favoured Manchester City at the Etihad Stadium. We decided to have a look at Arsenal’s tumultuous PL season which saw plenty of lows and few highs. 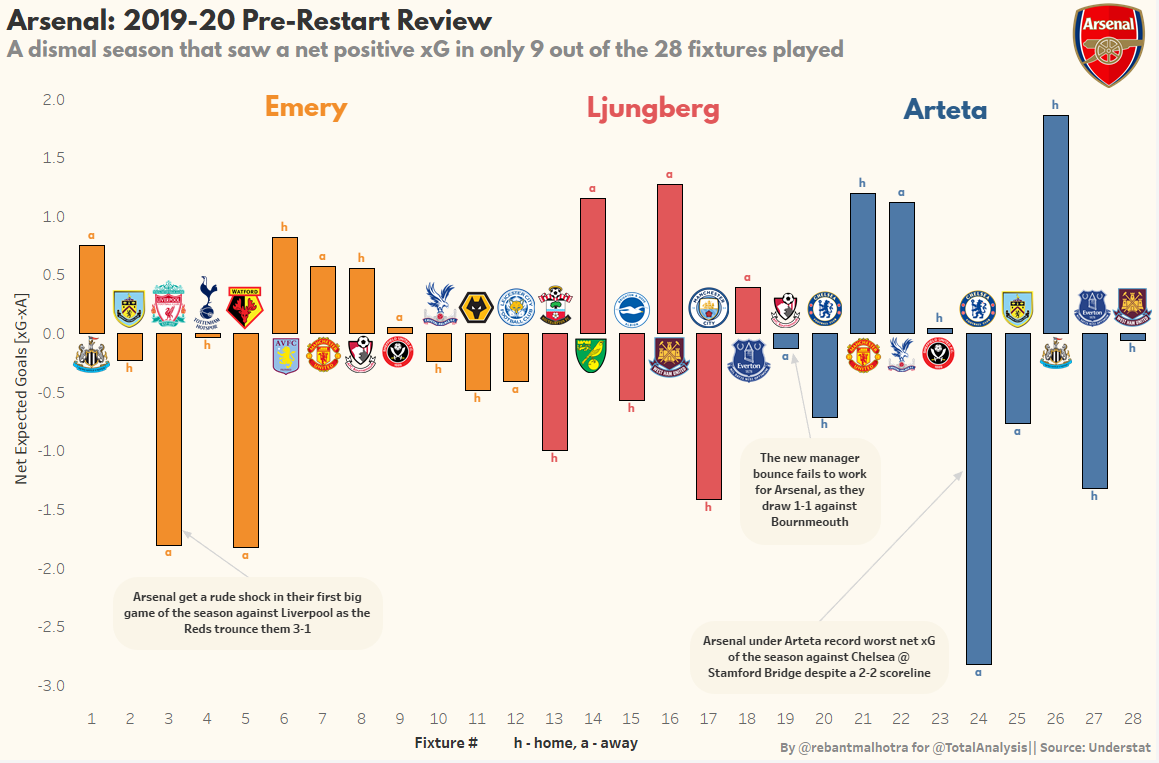 The season started off similar to the end of the 2019-20 run as Emery’s team maintained their “chameleon” style with plenty of tinkering. Arsenal continued to concede a lot of shots which put an already shaky backline under more pressure. With a spate of poor results coming their way and eventually getting knocked out of the Europa League, it was clear that Emery was on his way out.

Is there hope for redemption?

Freddie Ljungberg according to club sources was a different personality. While Emery had a conservative mentality (despite seeing minimal success on that front), Ljungberg was talked about as someone who wanted his players to be more expressive and play the game the “Arsenal Way”. Despite the change, Arsenal won only a single game from the five PL matches where Ljungberg was the interim head coach.

Football quality and spirits were positively impacted after Mikel Arteta’s appointment. Fans were excited at the prospect of having someone who had studied under two of the biggest footballing brains in Arsene Wenger & Pep Guardiola. However, there was natural nervousness as well, since this was Arteta’s first stint as a head coach. Arsenal once again got off to a rocky start as they could only scrape a draw against Bournemouth, a team that has had their own share of woes this season.

The much-needed buzz and excitement came off the back of a 2-0 win over Manchester United where Arteta’s game plan clearly worked against the opposition. While this win followed multiple draws and some frustrating games for the team, the Arsenal faithful could see the positives. Despite some unconvincing performances, Arsenal recorded 3 consecutive wins for the first time in the season before the league got suspended on accord of the pandemic.

Not much can be said on how Arsenal will perform once the PL starts again. A 6-0 friendly win against Charlton Athletic, may point towards an upbeat team roaring to get back into the game with a bang. But, with minimal team training and reduced match fitness, it’s difficult to predict whether the same enthusiasm will be witnessed when the Premier League officially starts. Star forward Aubameyang’s contract status continues to be a point of contention and him putting pen to paper will be critical in ensuring the Arsenal dressing room remains lively.