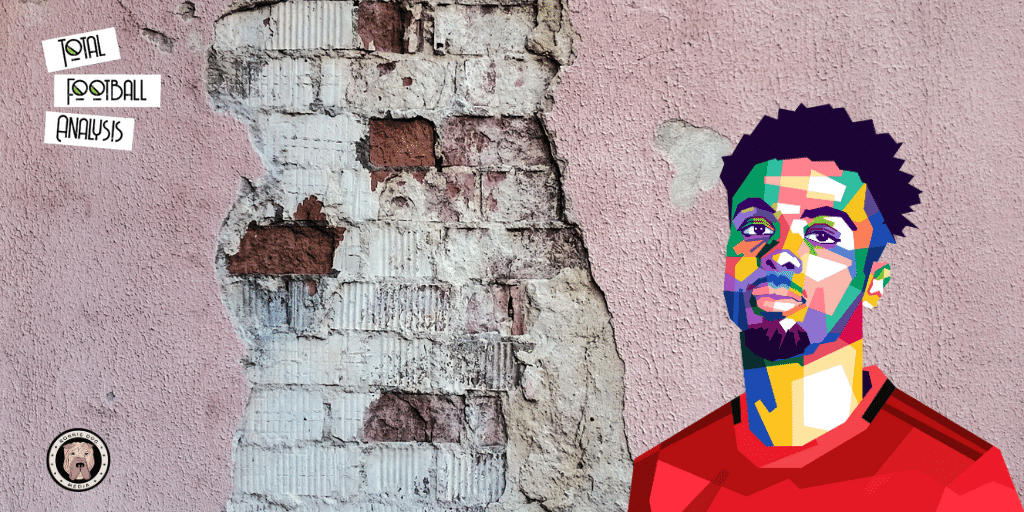 21 May 2017, Angel Gomes was first introduced to the world aged just 16 years, 263 days old. On that day, he etched his name on Manchester United’s history book by being the second-ever youngest player to ever play for the club since Duncan Edwards back in 1953. Not only that, but Gomes also put his name in the record book as the first-ever player to be born in the 2000s and play a Premier League game.

Just four months after his historic senior debut, Gomes captained England to their first-ever U-17 World Cup triumph after beating Spain in the final. As a very young attacking midfielder himself, Gomes hasn’t played a lot of minutes for United this season. However, recent sub-par performances from the likes of Jesse Lingard, Andreas Pereira, and Juan Mata should at least make Ole Gunnar Solskjær turn his eyes to the youngster. This tactical analysis will inform you how Gomes can be a useful alternative for United’s attacking department.

In this analysis, first, we are going to see Gomes’ main characteristics. Gomes is originally an attacking midfielder and prefers to play in behind the main striker. However, he is also capable to play wide as a left-winger. In fact, this season Gomes has only started one game in his favourite position; twice in the left flank.

The 19-year-old is mainly right-footed. When deployed as a left-winger, Gomes often cuts inside to use his stronger foot; either to cross the ball or make a shot for himself. Gomes’ crossing ability is shown by the average stats of 2.2 successful crosses per 90 minutes he made in the Europa League.

Gomes is also known as a dead-ball specialist. In the Europa League — where per statistics he spent most minutes this campaign — Gomes is often given the responsibility to take United’s set-pieces. From short-range free-kicks, corner-kicks, to wide-areas dead-balls mostly will be taken by the London-born. Looking at the statistics so far, Gomes averaged 5.4 corner-kick attempts per 90 minutes; which 3.6 of them went accurate.

Gomes prefers for the ball to be played into his feet rather than sprinting beyond the defenders. He also likes to rotate with his attacking partners to confuse their opponents. Naturally an attacking midfielder, Gomes likes to tuck inside when being deployed as a left-winger.

The academy graduate is very active to seek the ball when United have the possession. He often drops from his position to deeper areas; alongside the defensive midfielders. When dropping, he would open himself in the space and give another passing angle for the on-ball player. By doing so, he would his on-ball teammate more options to pass; therefore allowing United to progress the ball swiftly.

In advanced areas, Gomes also likes to come nearby his on-ball teammate. Gomes would often drift away from his position to the ball-playing side. By doing that, he would offer link-up alternatives and combination options; thus helping his team to attack in the final third.

In addition to that, composure is also one of Gomes’ trait. The Englishman is quite agile in tight space and won’t lose his calm easily even when facing multiple opponents. By the stats, on average Gomes got fouled 2.2 times per 90 minutes in the Europa League this season; third-highest among all United players so far. This particular trait is useful to win free-kicks in dangerous areas; something he likes to execute.

Another interesting trait from Gomes is his spatial awareness. Gomes is very smart in noticing space inside the opponents’ block. He would often free himself from his marker to appear in between the lines to offer a progressive passing option for his teammate. In between the lines, most likely Gomes would try to combine with his partners rather than making a shot for himself. Not only that, being in that zone is making Gomes more dangerous. The main reason is that his composure and good agility could force the defenders to commit a foul.

Not only that, but Gomes also likes to drift wide from his position; especially when he notices a space outside the opponents’ midfield. By drifting wide, Gomes would offer himself in a clear passing lane for his teammate. As a result, United can progress the ball through utilising the half-space. Either sending the ball wide or playing it centrally, Gomes’ presence in the half-space could make United’s attack more unpredictable.

In this part of the analysis, we are going to look at Gomes’ potential issues. Offensively, Gomes is not gifted with lightning-quick pace like another Solskjær’s forwards; like Daniel James, Marcus Rashford, or Mason Greenwood. Gomes would rather opt to start the transition rather than punish the opponents with trail-blazing counter-attacks.

Not only that, but the teenager is also not blessed with supreme physicality. Standing in only 168 centimetres and 62 kilograms, Gomes is most likely won’t be capable to win physical duels; particularly in the air. However, he is still very young and surely can grow more in the upcoming years. On top of that, he possesses a high football IQ that compensates for his physical weaknesses.

Defensively, Gomes is not very active; especially when playing as a left-winger. When deployed there, Gomes rarely joins the press from the ball-far side. This would hurt transition-heavy United, who would like to force a turnover from their opponents’ area of playing. Oppositely, this would give the opponents a space inside United’s pressing block; allowing them to progress the ball rather easily.

On top of that, he’s not quite sound in defensive duels either; even when played in his favourite position. For a fact, he attempted 2.2 tackles per 90 minutes in the Europa League; with only 0.7 successful tackles on average.

As mentioned in this scout report before, Gomes is a talented player with a very good football brain and superb agility. Not only that, but he also has elite composure and dead-ball ability in his locker to help his team’s tactics. These alone would make him a good attacking option for any team. However, he still lacks the diligence and willingness defensively; as well as physicality issues he has.

Nevertheless, he must wait for a little longer to play in his preferred position since the Premier League giant just secured attacking-midfielder Bruno Fernandes from Sporting CP. For now, Gomes’ best chance is to play in the left flank because regular-option Rashford is injured for the upcoming months. Before that, Gomes must work as hard as possible to improve his game. Will Solskjær give him the much-needed faith? Let’s wait and see.