After enjoying a fine comeback season at Villarreal, ‘The Magician’ Santi Cazorla is on his way to Qatari side Al Sadd SC to complete the last spell of his career. The former Arsenal man was already given a red-light following a horrific injury, but against all the odds, the 35-year-old impressed everyone throughout the season to make a comeback to the Spanish national side as well. The midfielder was an impressive performer in the struggling Villarreal side in the first half of the season and was one of the key figures in the Yellow Submarine’s 5th place finish in the La Liga table.

In this scout report, we’ll examine Santi Cazorla’s performance and individual traits that he has shown at Villarreal and analyse whether he fits in at Al-Sadd or not. Similarly, this tactical analysis will have a look at how Santi Cazorla will be an addition to Xavi’s tactics and will look at all the traits he’ll bring into Al Sadd’s midfield.

Cazorla was considered to be one of the best attacking playmakers in the league during his time in London. In his comeback spell at the Spanish top-flight, Cazorla again showed how his abilities to control and supply the ball tend to penetrate defences and establish control in the middle of the pitch. Villarreal often preferred to opt to a 4-1-4-1 formation, occasionally shifting to a 4-4-2 as well. Cazorla often occupied the left-hand side of the midfield, as his heatmap indicates. 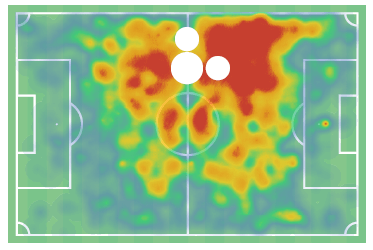 We already see Cazorla’s left-side preference in the midfield. If we look at his vertical coverage, it is fair to say he’s been a deep-lying playmaker as well as an attacking midfielder for Villarreal. Hence, in addition to a four-man midfield, Cazorla can also be seen adapting to a three-man midfield in a system like 4-3-3.

Teamed up with defensive-minded Vincente Iborra and illustrious Manu Trigueros, Cazorla was relieved of his defensive duties. Hence, the job of creating balls for the attack and maintaining the midfield control and shape was well-done by the Spaniard, including the fixture against Barcelona.

Talking about Al Sadd, Xavi has been flexible with his formation ever since he turned into a coach at the Qatari side. 4-2-3-1 and 4-1-4-1 are the most used schemes, which look to match Cazorla’s trait very well.

Al Sadd play with a double-pivot of defensive midfielders in a 4-2-3-1, allowing the advanced line of midfielders to attack without worrying too much about the defensive aspects. Hence, Santi Cazorla playing on the left side of the three-man midfield looks to work good as well. We can expect Cazorla to take the left-side and make it more lively, which we’ll discuss as the analysis progresses.

One of the best players of the 2019/20 Villarreal side, Cazorla was the heart of midfield whenever he appeared in the yellow jersey. He managed to score 15 goals combining the league and cup, followed by nine assists in the process. In addition to that, Cazorla managed 9.02 progressive passes per ninety while attempting 53.68 passes per ninety with 86.93% accuracy. What this goes to show is Cazorla’s heavy involvement in the link-up and progression of attacks, which were important in the build-up and creation from the midfield.

Most of Cazorla’s link-ups and passes were based on releasing the attackers, hence frequently creating goal-scoring chances for Villarreal. A major share of Cazorla’s passes were either forward or towards the other side to switch play.

As we can see in the sonar, Cazorla’s passing pattern is either tilted towards the opposite flank or towards the advanced side of the pitch. He used his technical abilities to find spaces and pass the ball to those very spaces, making him an ideal character in Villarreal’s link-up.

His forward passes were in the form of through-balls to either of the forwards, releasing them on the spaces that the opposition defence opened. In the instance against Eibar shown below, a similar trait incident is seen. 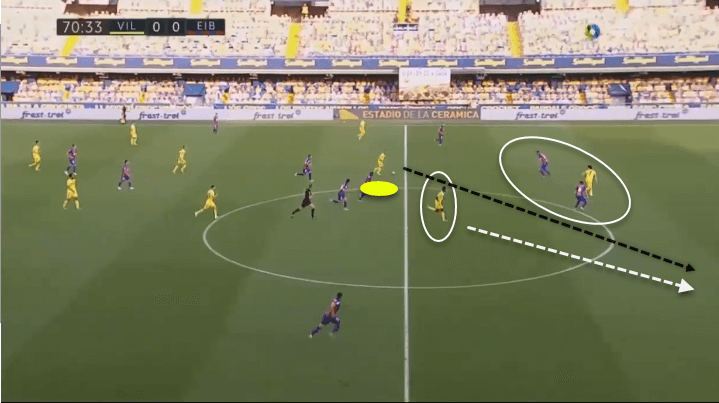 As we can notice, Cazorla has the ball in the middle of a transitioning attack. The more advanced forward, right in front of Cazorla, seems like a more rewarding option to a normal eye. However, the option is surrounded by two defenders closely, making him vulnerable to losing the ball once Cazorla opts to pass. However, Cazorla, seeing the movement of both the defenders closing towards the man, spots a void created towards the right side of the pitch. He detects Samu Chukwueze’s run towards the void and instead, passes according to his run. This awareness lands Chukwueze a free run and Villarreal create a dangerous threat on goal.

This kind of awareness in a midfielder is useful to any side in the world, however, Al Sadd will look to use it to their advantage more than what Villarreal did.  Playing Gabi as the defensive midfielder that supplies the ball to Cazorla, they can quickly exploit spaces created by the opposition movement and capitalize on them. Roaming just in front of the defence and slightly deeper than midfield, Gabi-Cazorla link-up will be one fascinating thing that Xavi will look to work on. 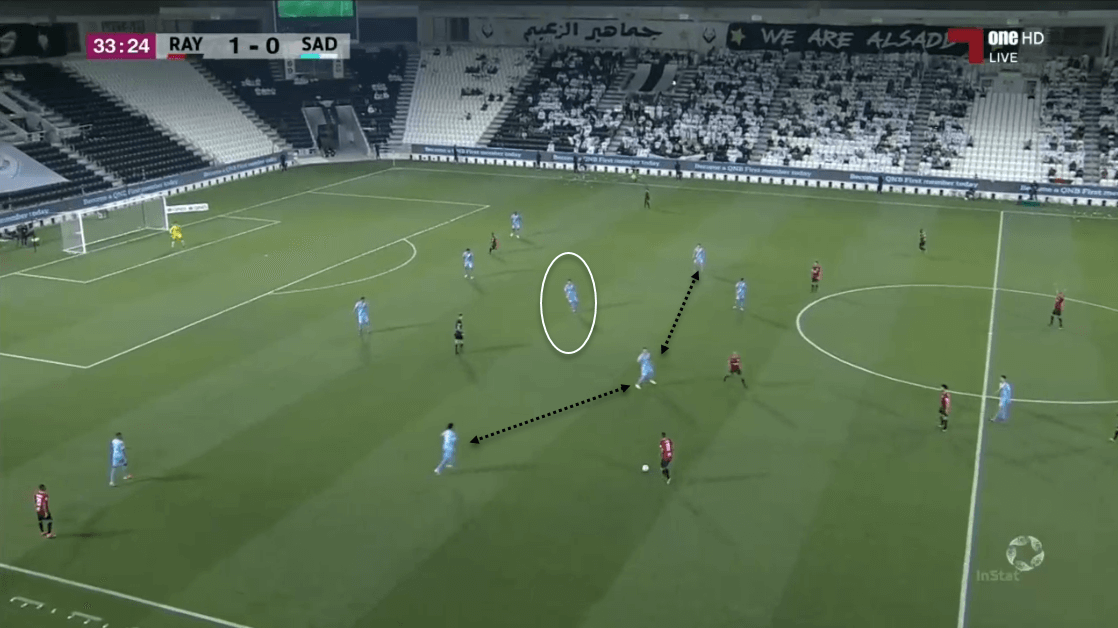 As we can see in the instance above, this might be a more common sight next season in Al Sadd midfield. With Gabi dropping deep, Cazorla will be relieved of his duties and not worry about tracking his man back. Cazorla will also be facilitated by two of the most accurate passers in the Qatari league – Gabi and Woo-Young Jung. Both of them possess passing accuracy above 90%, making them reliable companions to Cazorla’s liking.

Similarly, when Al Sadd advance forward, Cazorla can now act as a link between Al Sadd’s overhaul in the final third and the deep-lying midfielder (Gabi in this instance). In this manner, Al Sadd can always have the area covered, as well as depend less on Gabi’s through balls to proceed centrally. 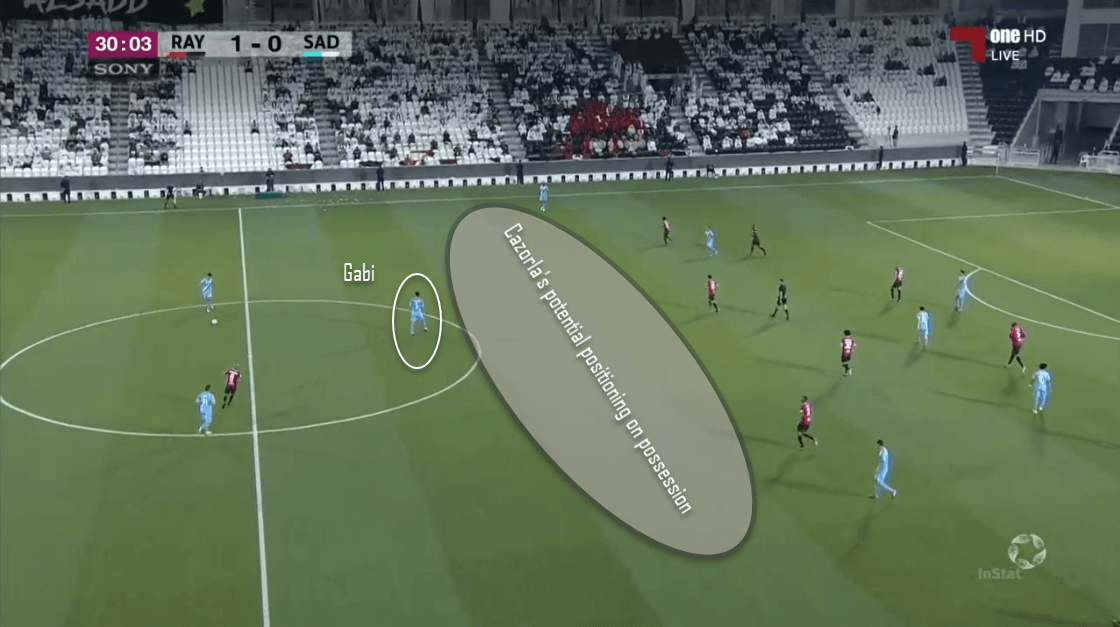 We can see in the above instance, placing Cazorla in the space indicated makes more sense, and makes Al Sadd’s attacking shape more practical and solid. Cazorla’s movement from the left towards the centre to aim at the potential link-up options forward will make the Al Sadd team rely less on individual traits and will help on making a functioning midfield system. Cazorla will be able to use his ability to detect spaces from the middle if he places himself in the middle to receive from Gabi, like shown below: 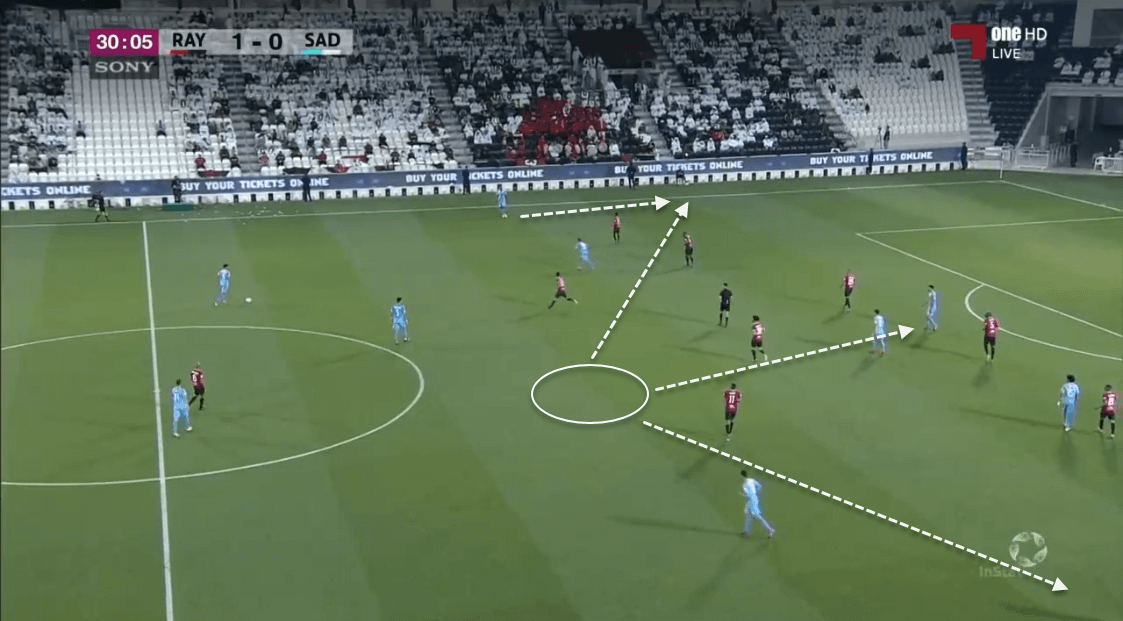 As we can see, the central position will open up more options under Xavi’s tactics and will allow a midfielder with Cazorla’s level of awareness to create and pass into spaces more liberally. Similarly, this will ease a heavy work rate off of 35-year-old Cazorla’s shoulders, making him able to use his technical prowess more often.

At Villarreal, one of Cazorla’s stand-out points was his ability to deliver diagonal long balls with astounding accuracy. Not only did this helped Villarreal to switch plays, but to create 1v1 opportunities on the other side of the pitch. His presence helped both sides of the attacks – his corresponding attacker got good through balls to proceed forward and a very good link-up midfielder, whereas the other attacker got someone who could detect the space ahead of him to create a 1v1 opportunity with a quality long ball. The later attribute facilitated Villareal more, as they were able to make use of Chukwueze’s pace more often.

Al Sadd would be delighted to have Cazorla in this phase, as they’re looking for a profile who can compliment the left-winger well, as well as switch play in spaces. Playing in a 4-2-3-1, the double pivot is usually tucked centrally for Al Sadd, relying on left-winger Akram Afif to create chances from the deep. As a result, Afif, skilled enough to make runs inside runs, has to drop deep to create opportunities and in the process, swaps his place with the left-back Abdelkarim Hassan. This not only puts a compromise on Afif’s run-making abilities but his ability to cut inside and score. Hence, to utilize the left-winger to his peak, a left-midfielder who can create channels from the left is more than ideal in this line-up.

If we put Santi Cazorla in this bracket, we can sense the system working fairly well. Similarly, Cazorla’s presence will make the cover for left-side more stable as the left-back will have balanced offensive and defensive duties. Similarly, Afif can get through balls to make wide runs, as well as have someone whom he can always pass to ease the pressure off him. This will add another dimension to Al Sadd’s attack, as their left-side progression is too predictable right now. 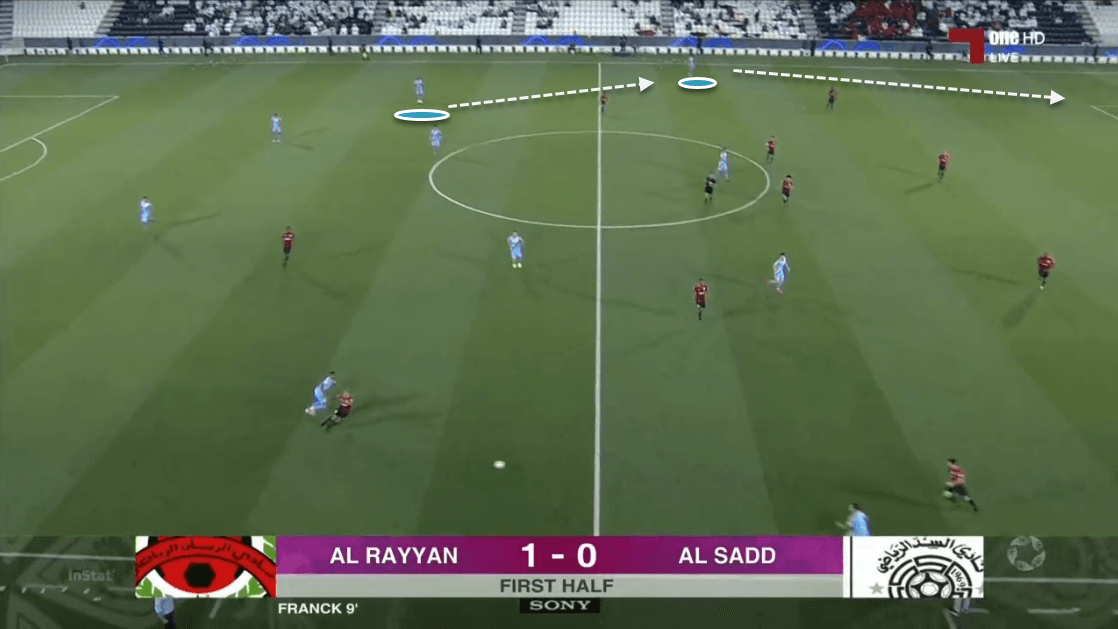 In the instance above, I’ve tried to denote how Al Sadd’s attack progresses from the left. As soon as Hassan gets the ball, he passes it to deep-lying Afif, who makes a run himself and passes it to Hassan, who manages to run towards the centre. In Cazorla’s presence, the left side will have more dynamism, as he can switch plays, or trigger the run of Afif in as his next move. Al Sadd will be able to use Hashim Ali, on the right side of the pitch. This will help Al Sadd create more spaces and operate on them to build-up more attacks with the ball.

Will he get the glory for Al Sadd?

First things first, Cazorla will be a great addition to Al Sadd’s attack and midfield department. With local star play-makers and goal scorers like Hasan Al Haydos and Akram Afif already in the side, Cazorla will only enhance the quality of chances that Al Sadd create. While Al Sadd have been the top-scoring side and an elite team when stats are concerned, their defensive lapses have limited them to the third position in the league table. With Cazorla’s stability, their defence can benefit as well.

In addition to all the things we discussed above, Al Sadd are bringing in a skilled set-piece taker, who can equally create threats from free-kicks and corners, also providing very good penalty-taking ability. Hence, with minor tweaks in formation, I personally think this midfield maestro will spend the last spell of his career on a high under Xavi.