The game ended with a 2-2 draw. This game might hugely affect the final ranking in the English Premier League of this season so both teams did their best to prevent losing points in this game. 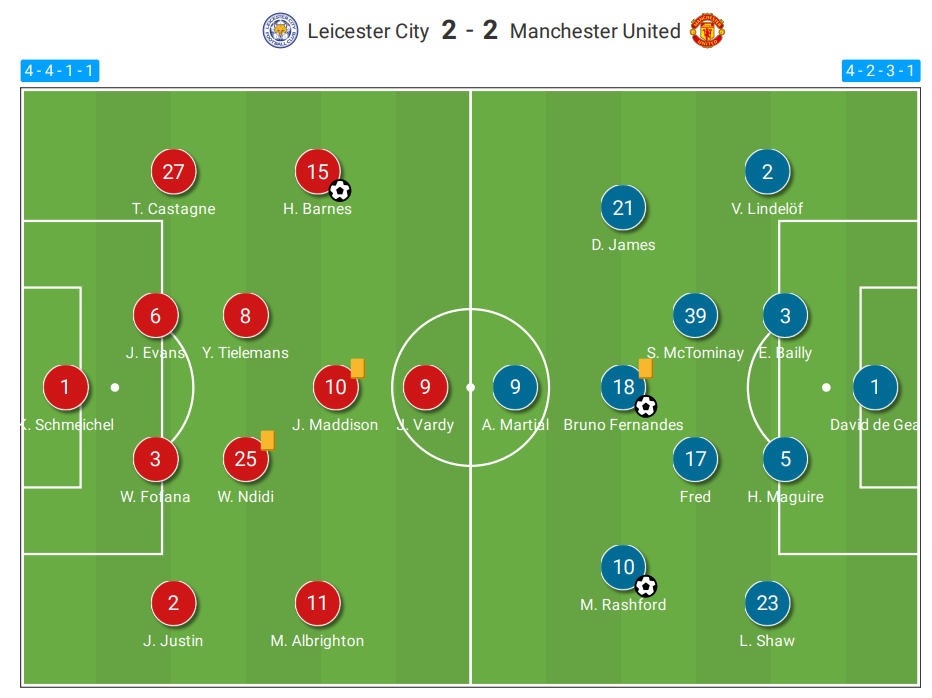 In this match, the defensive tactics deployed by Manchester United were quite intriguing. They utilised a 1-4-2-3-1 system to restrict Leicester City’s offensive 1-4-2-3-1. In general, they tried to prevent Leicester from accessing the centre in building up as their pivot Tielemans was top class in receiving and turning with his half-touches to escape the pressure to face forwards and dictate the play. Once the passing lane to Tielemans emerged what they could do was to foul or being bypassed by the Belgian. Thus, the essential concept for United’s defending was to forbid the use of centre for Leicester and the ball should be forced to the outside-back. To achieve this, United deployed a 1-2 pressing scheme to control the ball circulation between two centre-backs and forced the ball to the full-back.

As the ball travelled to the full-back, United set trap intending to recover possession on the flank. The passing lane to the dropping winger, who was marked by one of United’s shifting pivots Fred or McTominay was allowed while United’s attacking midfielder would mark the ball-side pivot to close the channel to pick him. As the ball was released to the dropping winger, United’s pressing winger on the same side would drop to double-up with the pivot and challenged the ball.

The first image above manifests how United restricted Leicester to access the centre. The striker Martial and non-ball-side winger Rashford stepped to match up with the centre-back-duo. All passing lanes to the centre was closed and no circulation between two centre-backs was allowed. The ball was forced to the flank.

The second image shows us how the pressing trap of Manchester United worked. A passing channel to pick the winger was allowed while the near pivot Tielemans was restricted. When the ball was released to find the winger, the pressing winger James dropped quickly in full speed to challenge the ball with McTominay who shifted to the side to prevent Leicester’s winger from turning. The ball was recovered by James in this scenario.

Though the tactics seemed quite effective, an issue emerged as the pressing front two were sometimes not getting in their pressing position on time. The holding zone was overloaded by two pivots as there was only one player (attacking midfielder) to cover that zone. If the front two did not fulfil their responsibility to restrict the centre-backs from playing out, the pivots could be picked easily and they could cause decisional dilemma for the attacking midfielder and turned. You could easily see the overloaded scenario from the first image above.

As we’ve mentioned above, Leicester have a top-class pivot in Tielemans. He is the key player in the squad and most of the tactics were built around him. When Leicester played out from the back, they would catch United’s mistakes of not controlling the centre-back-duo well and directly find Tielemans who could turn in the overloaded holding zone. This was the basic playing out to midfield model for Leicester. If Tielemans could not be picked vertically, a third-man would be employed to activate the status of Tielemans receiving the ball facing forwards.

The third-man could be the dropping number ten Maddison. He would initially position between lines and dropped in front of line to pass back to Tielemans. Also, the full-back could pick Tielemans in open body shape if the lane to him was allowed due to the errant positioning of the opposition.

After Tielemans received the ball, two patterns would be activated according to the direction of his touches. If he faced to the same side (he was the left pivot), a combination of third-man run would be activated. The left-winger Barnes positioned invertedly and dropped to create a passing option to activate Tielemans facing forwards, as well as creating spaces for the left-back Castagne to run onto. As Tielemans pre-decided on the direction on his touch with his body shape suggesting the direction of the play, Castagne would do a third man run into the space (crossing position) created by Barnes. Tielemans would then pick Castagne to send him to cross and created chances.

Above is a manifestation of the attack on the left side. Left centre-back Evans picked Barnes who dropped to activate Tielemans facing forwards. As the back pass was launched, Castagne rushed a third-man run into the space created by Barnes’ dropping movement. Tielemans then one-touch passed to send Castagne to the crossing position to create a scoring chance.

On the other hand, if Tielemans decided to take his touch to the right to switch the play, the other pattern would be started. The receiver of switching play would normally be the right-winger Albrighton. He would drop to the middle third area to receive the ball and free spaces upfront. As the ball was transmitting, the right-back Justin would underlap to reach the gap between United’s left centre-back and left-back. This helped clear spaces for Albrighton to cross early as well as a passing option in the crossing zone. On this side of the pitch, they wanted to cross early to exploit the space between the goalkeeper and the defensive line. 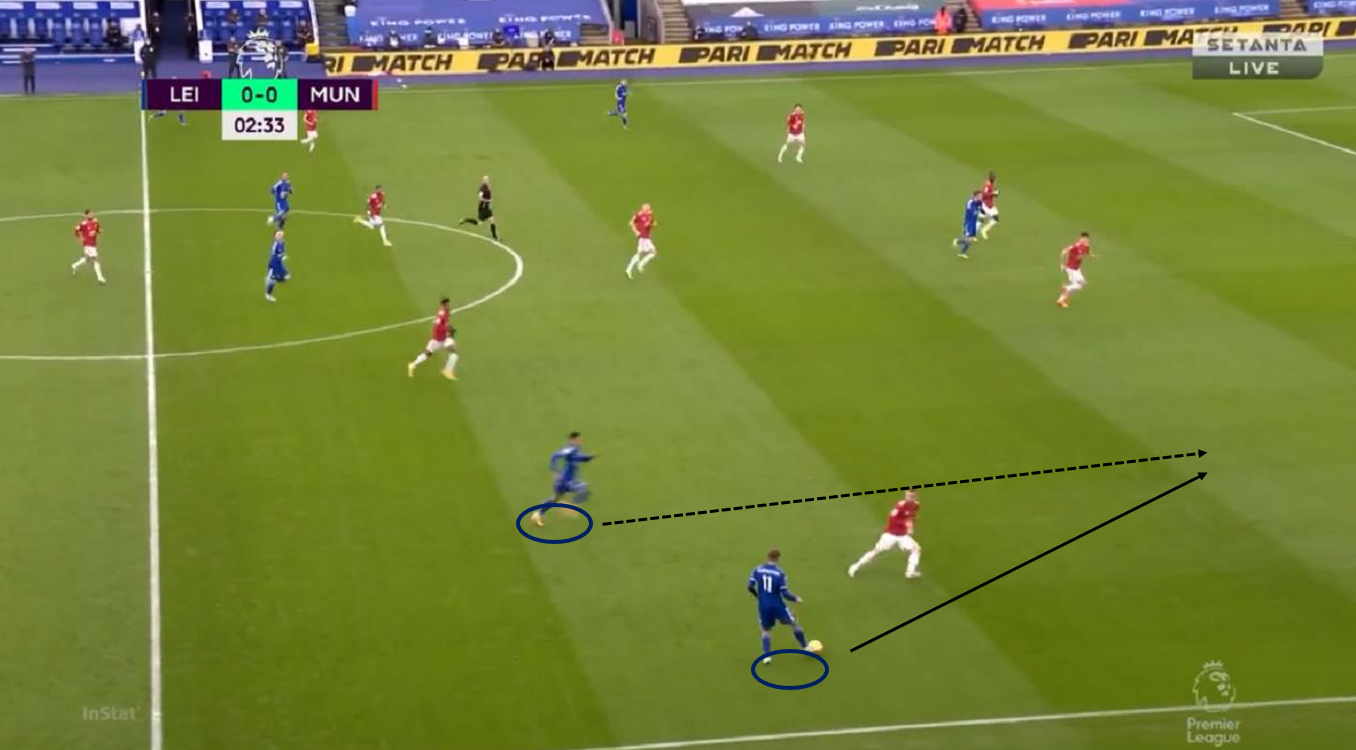 You could see the example from the above image. Albrighton latched onto the ball in the middle third of the pitch while Justin did an underlapping run to create a 2v1 numeral superiority scenario. United’s left-back was overloaded and Justin received the pass from Albrighton and crossed early as soon as he could make contact on the ball.

To break down Leicester City’s defence, Manchester United attack the defence straightly from the midfield area. Once they had the chance of facing forwards and pass the ball forwards, they would be determined to put the ball behind the defensive line to find runners like James, Martial or Rashford. Leicester City’s centre-backs were slow and not anticipating enough to pre-drop a few steps to secure the space. 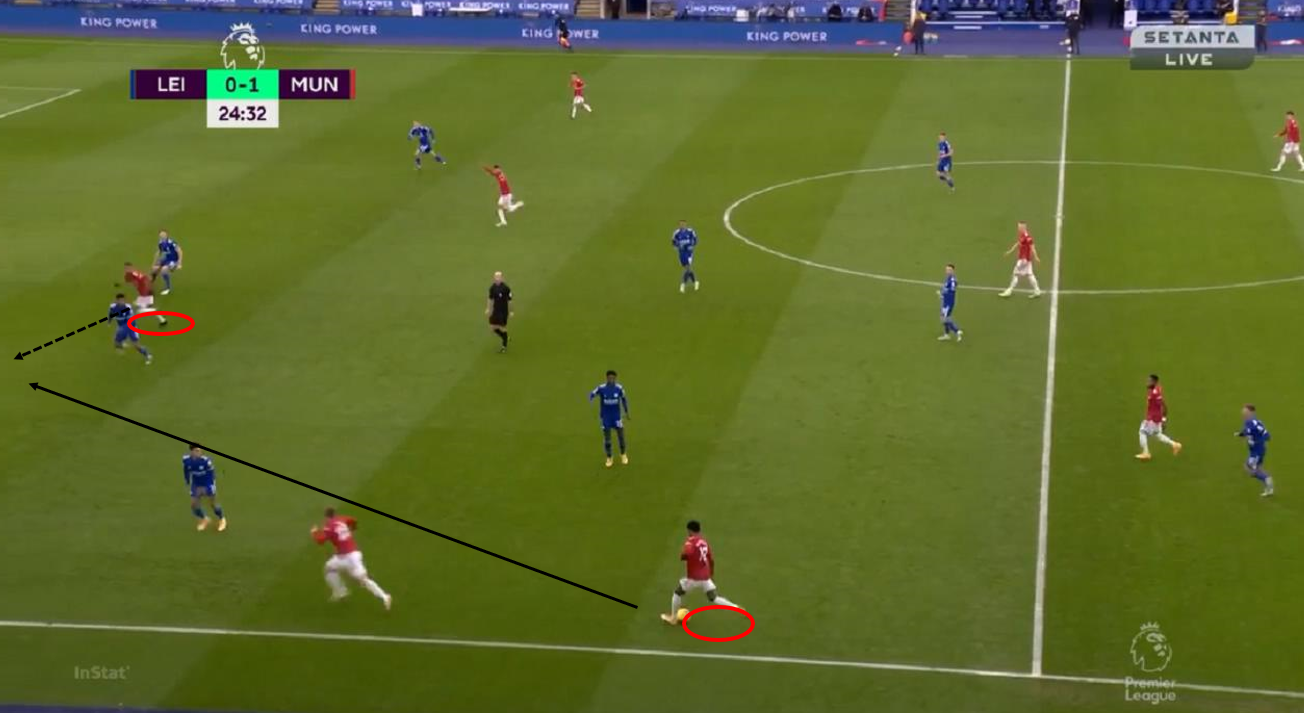 The above image showed us how Manchester United attacked the opposition when they sat in the mid-block. Rashford possessed the ball unpressed on the flank facing forwards in the middle third. On this occasion it was Martial who ran behind the defensive line to received the ball in the space and he easily latched onto the ball in that space. Leicester’s centre-backs did not recognise the game enough as this was a typical scenario called ”threatened, no pressure on the ball”, and a textbook solution would be to drop a few steps before Rashford pulling his leg, leaving 1-2 yards from the runner. Then as Rashford pulled his leg, ready to hit the ball, they should drop in full speed to secure the space behind the line.

On top of this, to take advantage of Leicester’s weak ability in shifting block, a simple pass from one centre-back to the another centre-back would create spaces for giving a diagonal forward pass to find winger. Then the winger would one-touch pass to find the number ten and a combination of one-two might be executed. In this sequence of passes, the pace of the pass to find winger and one-touch pass were essential in taking advantage of Leicester’s slow shifting block. 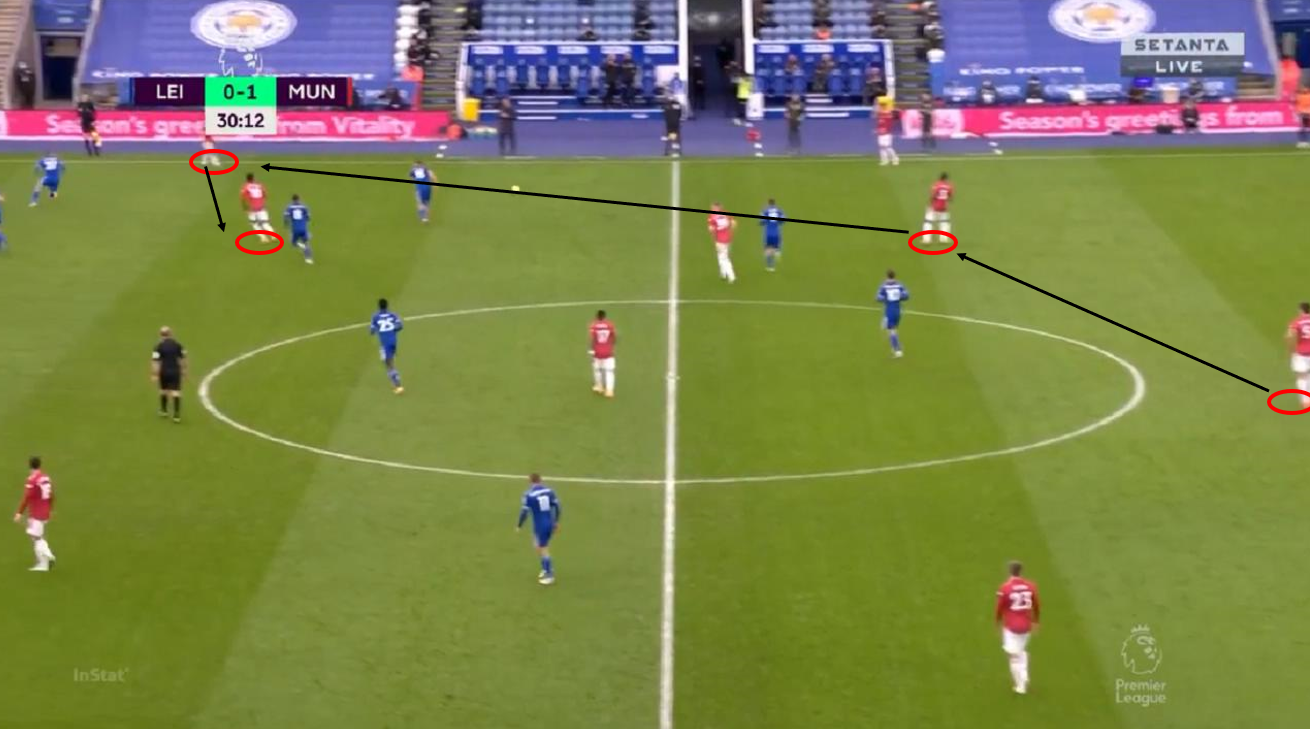 The example above manifested this sequence. First Maguire picked Bailey and it forced Leicester to move the block. However, they were not fast enough to cover the passing lance from Bailey to the right-winger James on this occasion. The diagonal pass was launched and James then one-touch passed to find Rashford who rotated as the number ten. They played a one-touch and got into the crossing position.

This is quite an interesting match. The tactics deployed by both teams were intriguing. We shall expect to see how both teams would improve over the course of this season with competing with opposition like Chelsea and Liverpool.