In the latest MLS match week, San Jose Earthquakes hosted Minnesota United. The Earthquakes were hoping to find their first win of the season after making a comeback against Toronto FC in their opening game week to level the scores 2-2. Minnesota United, on the other hand, were looking to extending their positive start to their season after winning their opening fixture against Portland 3-1.

The match ended with Minnesota smashing San Jose Earthquakes by a score of 5-2. However, the scoreline didn’t necessarily reflect the script of the game. The home side dominated possession. At the end of the day, though, set pieces and aerial dominance won Minnesota United the game after they took advantage of the opportunities they were given. This tactical analysis will identify exactly why the match ended the way that it did. 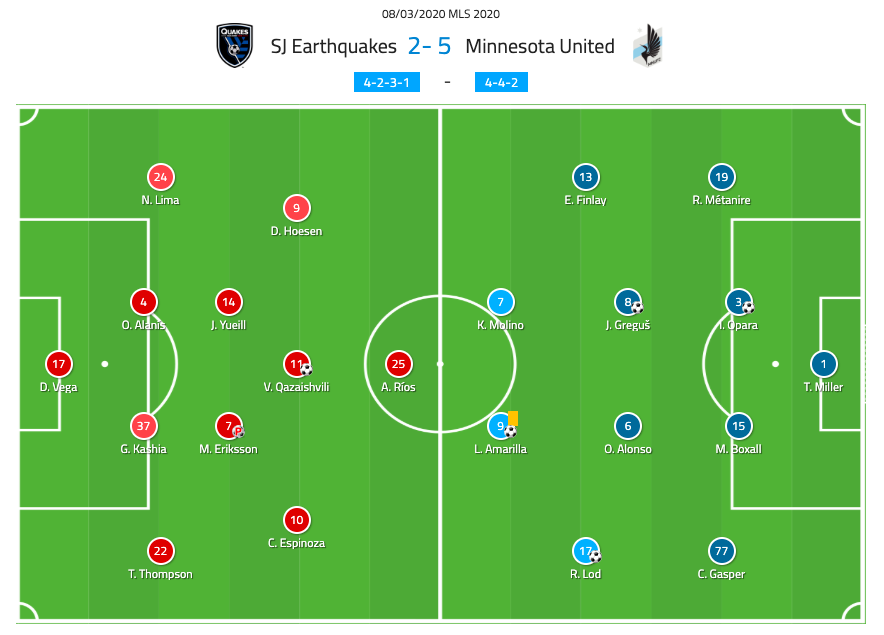 San Jose Earthquakes’ head coach Matías Almeyda sent out an unchanged starting eleven from his match against Toronto FC in the opening match week. The Argentine manager stuck with his 4-2-3-1 formation that saw his side make an impressive comeback against Greg Vanney and the 2017 MLS Cup winners.

Adrian Heath also trusted his starting eleven that beat Portland in their first match. In their 4-4-2 formation, Luis Amarilla acted as the highest attacker, with Kevin Molino dropping slightly behind his partner.

As mentioned in the opening section of this analysis, San Jose Earthquakes dominated 61.4% of the possession. They kept possession by circulating the ball across the width of the field, switching the play to target isolated players on each flank. Their fullbacks played an important role in their possession, but in an asymmetrical way. Left-back Nick Lima can be seen hugging the touchline on the left side of San Jose’s attack, while right-back Tommy Thompson can be seen tucked into the halfspace. This caused Cristian Espinoza to stay close to the right touchline, while Danny Hoesen was more central that his full-back partner. We can see this shape in the image below. 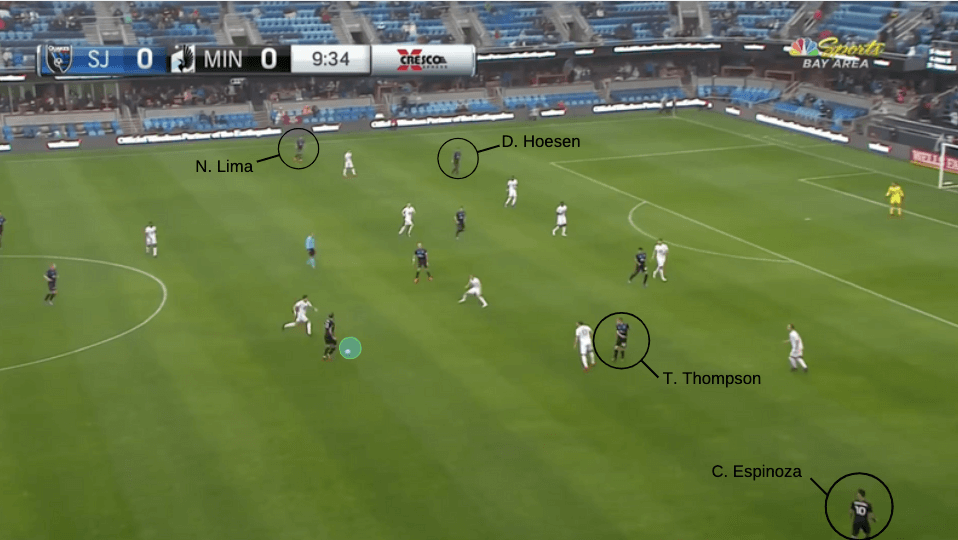 As well as circulating the ball across their backline, San Jose linked up in Minnesota’s half to quickly switch the play as well. We can see, in the image below, how Jackson Yueill and Thompson linked up on the right side of the field to quickly switch the play. We can see centre-back Guram Kashia play the ball back to Yueill. Yueill quickly looks to find Thompson with a progressive pass. 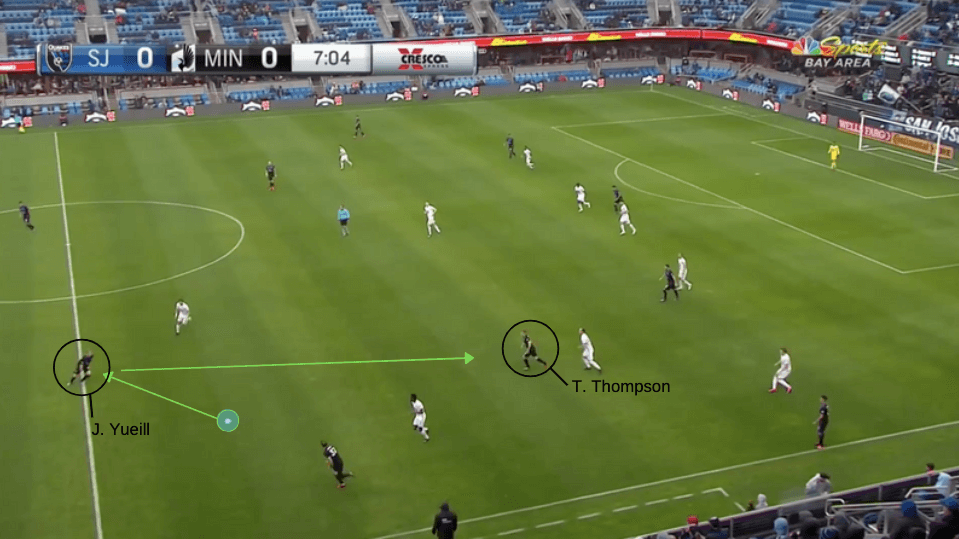 Yueill then quickly moves into a more central position to receive the ball back from Thompson before hitting Lima on the far left touchline. Lima has time and space to take a touch and whip a ball into the Minnesota box. Unfortunately, for the home side, Lima’s cross failed to beat Ike Opara at the near post. 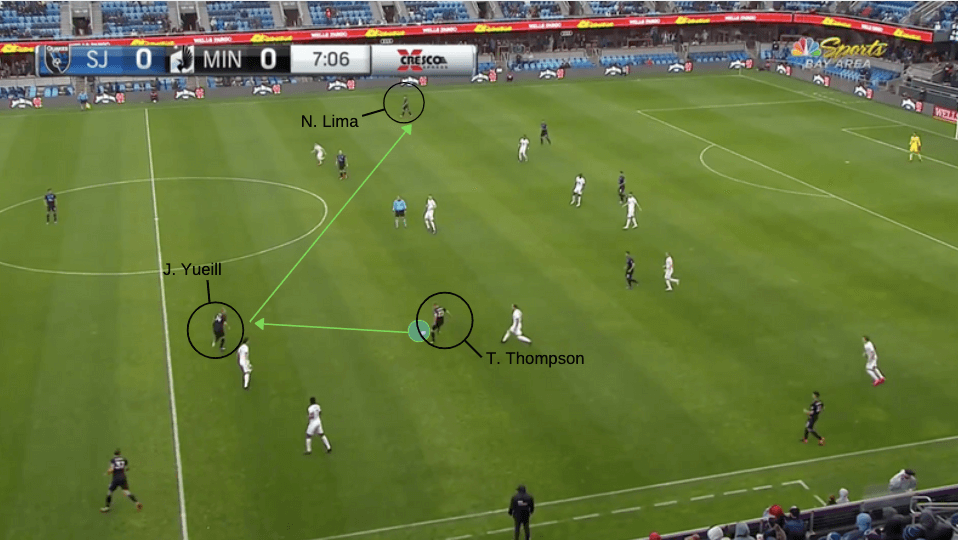 The possession of San Jose was matched by disciplined defending by Minnesota’s defenders and midfielders. They kept their 4-4-2 formation, forcing San Jose to beat two blocks of defensive lines during their buildup. We can see an example of their defensive structure in the image below. 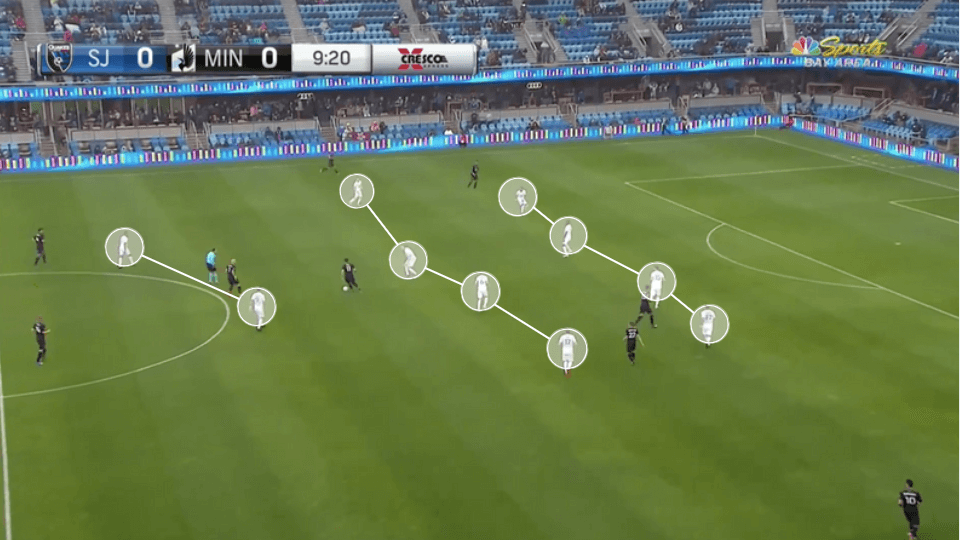 Once again we can see the San Jose wide players finding space in isolation during their buildup. Minnesota were happy to leave the San Jose wide players with space, closing them down quickly when play was switched. They also appeared to deal with any deliveries into the box from wide areas with ease. We will discuss why Minnesota were so effective at dealing with deliveries into their box from wide areas in a later section of this analysis.

A frequently used tactic from the Earthquake was to see Thompson overlap Espinoza from a central area. This happened multiple times during the match. In the image below we can see Thompson passing a ball from the half space into Espinoza in the channel. 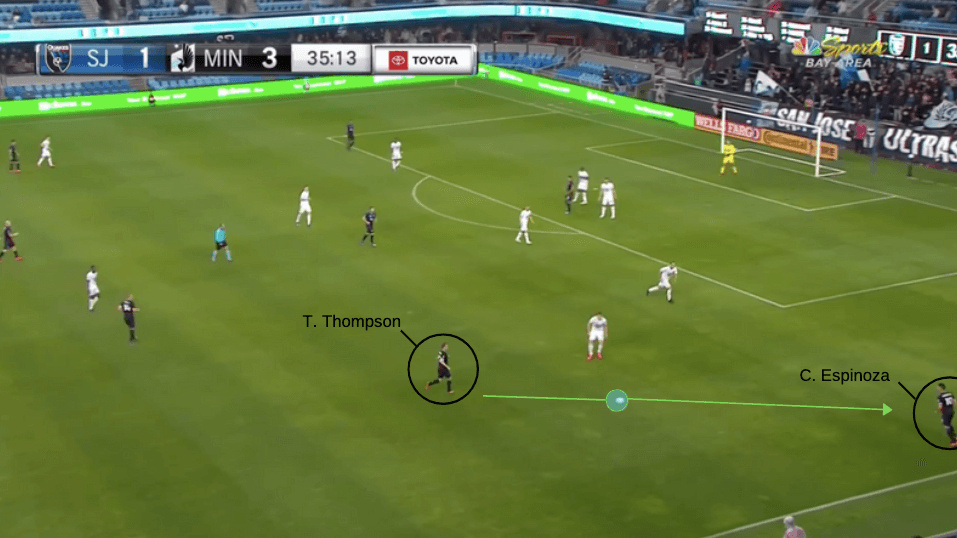 After playing the ball into Espinoza, Thompson followed his pass, overlapping his teammate. This pulled Robin Lod from his position tucked in with his defensive block, forcing two players to defend the wide area. This subsequently opened up passing lanes into a central area, as well as freed up space in the middle of the park. 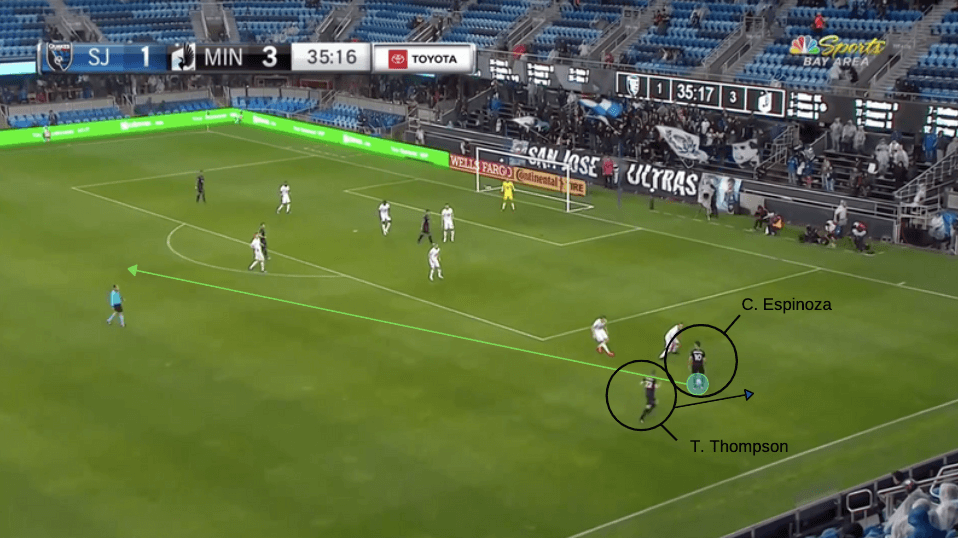 Ultimately, Minnesota United won this game by dominating their aerial battles. This was a combination of their physical dominance in the air, as well as San Jose’s poor marking of Minnesota players. Of Minnesota United’s five goals, two were scored directly from corner kicks. Another goal was a rebounded shot from a penalty that was won after Opara was fouled in the box during a Minnesota corner. United’s second goal was a free header scored by Luis Amarilla who was left unmarked in the box.

Let’s take a look at the first example of San Jose’s poor marking during set-pieces. We can see Kashia position himself goalside of Opara before the ball is delivered into the box on the corner before the Minnesota defender scored the first goal of the match. This is a decent position for the San Jose defender, who appears to be solely focused on keeping himself laser-focused on marking Opara. 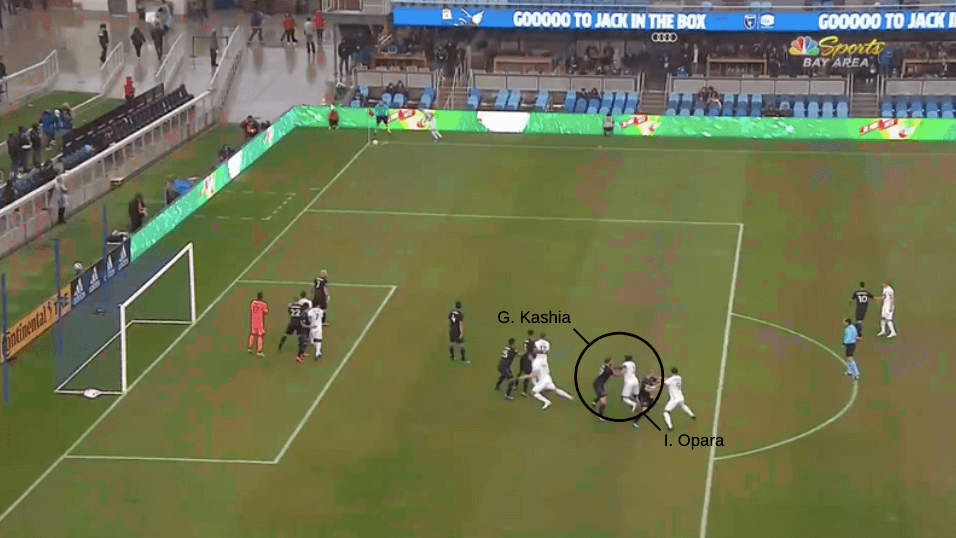 However, we can see, in the moment right before Opara makes contact with the ball, Opara has completely lost his man. Kashia let his man run off him, into the path of the ball before Opara scored. We can see this in the image below. 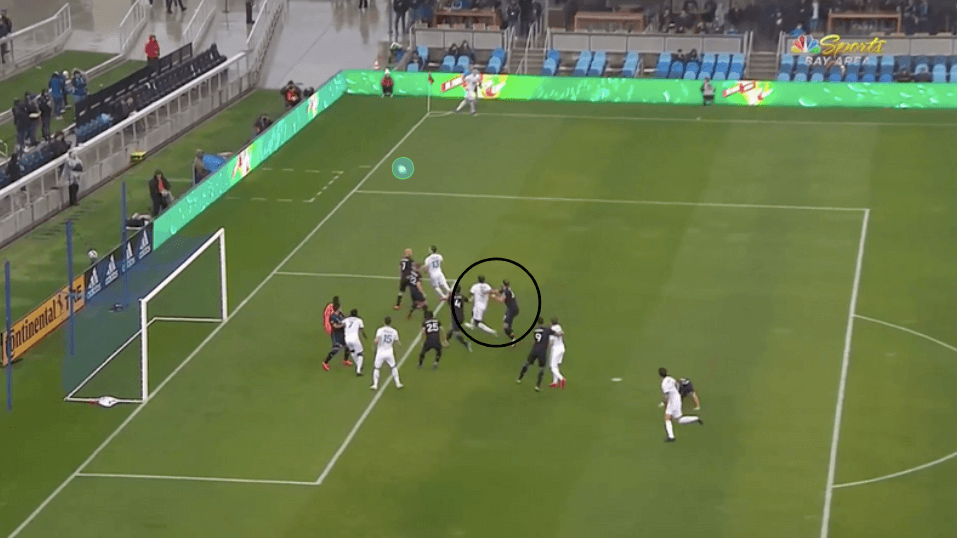 Kashia was also responsible for fouling Opara when Minnesota conceded a penalty at the end of the first half as well. Minnesota also swapped up their attacking routines on corners, with the players taking up much different starting positions when Opara scored his second goal in the 70th minute.

Opara was key to his side’s victory, scoring two goals from corners and winning a penalty for his side as well. He was dominant in the air, and was clearly too much for the San Jose defenders to deal with in the box. Interestingly, statistics suggest that San Jose won 56.25% of the 16 aerial battles during the game. However, Opara won 75% of his aerial battles, showcasing his strength in the air.

It became apparent to San Jose that they weren’t going to win the aerial battle both defending corners or attacking from them. In the first half, the side won a corner on the right side of the field. Instead of delivering a ball into the crowded box, Espinoza floated the ball to the edge of the box where Oswaldo Alanís had a free shot at the net. The side-footed volley just skimmed past the post. 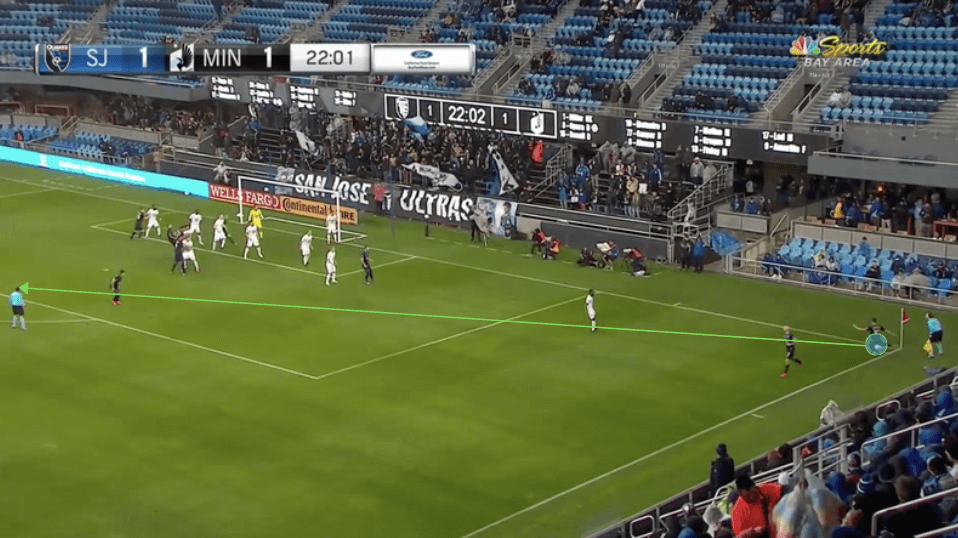 At the end of the day, this game was won on set-pieces. With three of their goals coming directly from set-pieces, Minnesota heavily relied on dead ball deliveries to capitalise on their side’s strengths.

With the MLS facing a shutdown due to the ongoing global pandemic, both Adrian Heath and Matías Almeyda will have time to look at their team’s tactics. Heath will be thrilled with his side’s ability to capitalise on their chances, scoring from five of their 10 shots on target. Almeyda, however, will be shaking his head as to how his team were unable to make use of their possession more effectively. However, with them scoring two goals, despite Minnesota’s impressive defending, San Jose surely be looking to improve their set-piece defending before the season picks back up again.