We are into the first international break of the 2021-22 season. With various top-flight leagues taking a skip, the EFL League One delivered some great club football action across England with Wimbledon against Oxford United being among the best ones.

Wimbledon came into the match on a 4 game winless run after registering an opening day vitctory. Oxford United, on the other hand, came into the game following an impressive win against Lincoln City last week.

This tactical analysis discusses the tactics deployed by both teams and how Wimbledon executed an impressive victory against their opponents. Let’s begin the analysis.

Wimbledon made 3 changes to the lineup that drew against Ipswich Town. Alexander, Assal and Pressley made way for Guinness-Walker, Rudoni and Mebude as Robinson decided to ring in the changes to put Wimbledon’s season back on track. 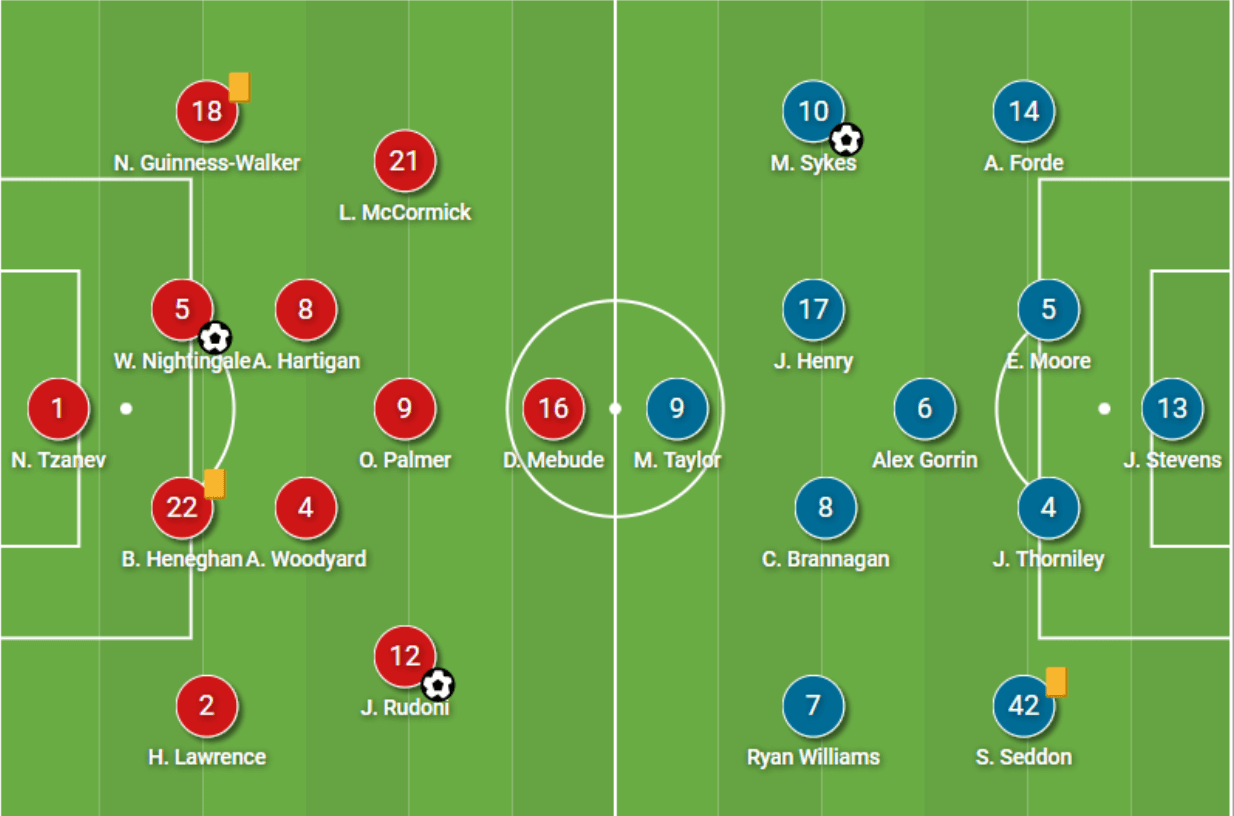 Oxford United made one change to the lineup that beat Lincoln City 3-1 last weekend with Ryan Williams coming into the lineup for Gavin Whyte.  Despite the changes in personnel, both of them went with the same formation into the game.

Oxford United are one of the very few teams that have used 4-3-3 shape extensively both with and without possession. A system assumed to be only useful for the elite clubs like Manchester City, Liverpool, etc in the world, is put forward to good effect at the 3rd division by Karl Robinson. They play with the same structure both in and out of possession. The structure does shift into a 4-5-1 without possession if they decide to defend in a mid-block.

Though the 4-3-3 offers great stability with the ball, without it can be troublesome if not successfully executed or the opponents exploit with their quality. The presence of a single forward pressing two centre-backs already gives the opposition a 2v1 advantage. But most of the team’s using this system do not worry a lot about the CBs but their main priority is to cover the deepest defensive midfielder to stop him from receiving the passes. But Oxford didn’t do that in many situations and often let the Wimbledon DM, Woodyard to receive the ball. We can see an example of that in the image below as the striker, instead of covering the DM decided to press Wimbledon CB covering the other CB. But their RM is slightly wider and he cannot reach the DM in time to press him. 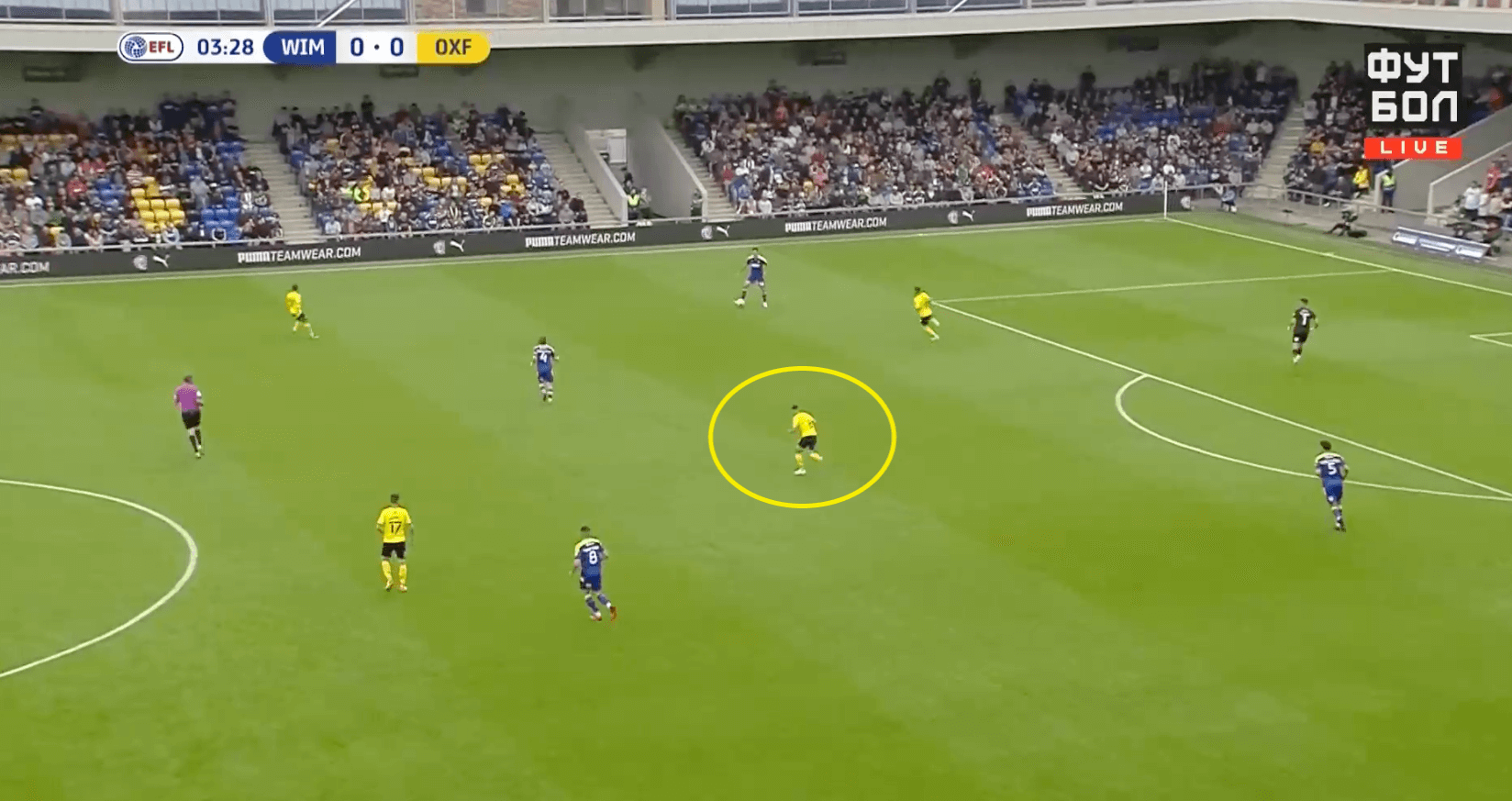 We can see another example of them making the same mistake where the forward is pressing the CB with his cover shadow not proper in line with the direction towards the defensive midfielder and also he has much space ahead of him if the pass was to be played to him. 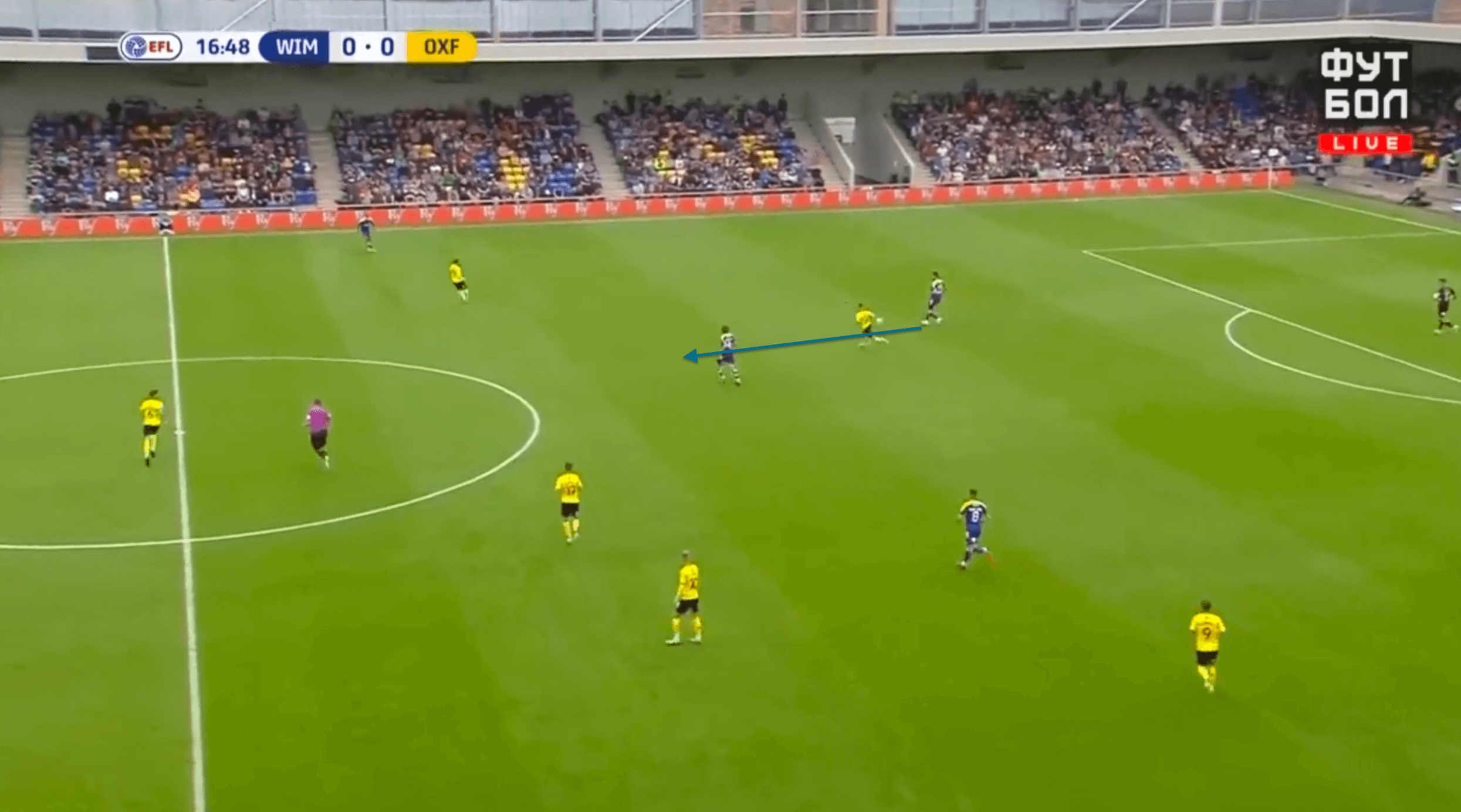 The basic defensive principle for any team is to block the progression of the ball, especially through the central regions. The coverage of these are prioritized by all the teams across the globe. But if a player is to unnecessarily step out and leave his space centrally then that would cause a domino effect of the opposition using that space to exploit. We can see that in the image below, where Henry has stepped up tp press while Sykes gets dragged out of position which causes space inside for Wimbledon. 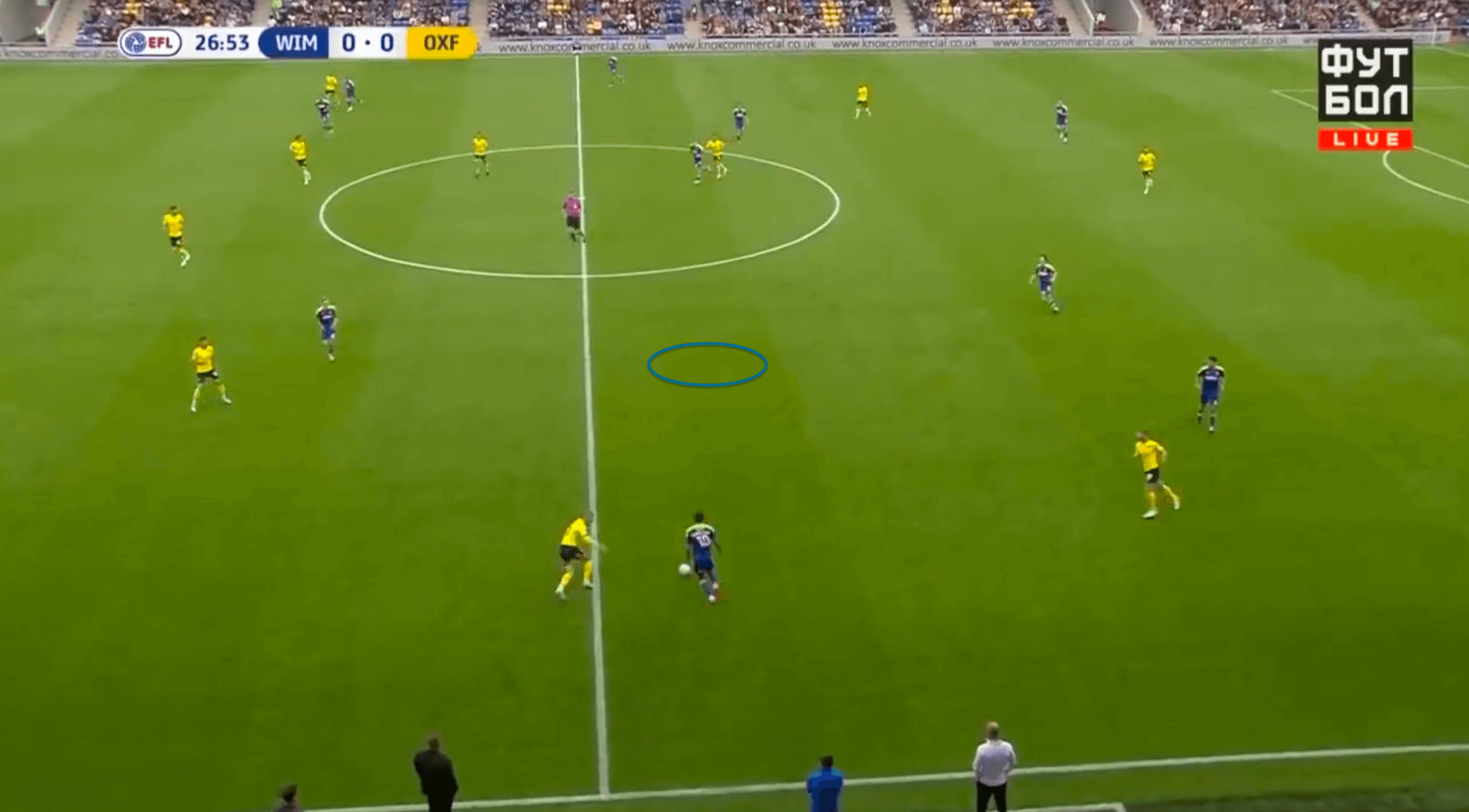 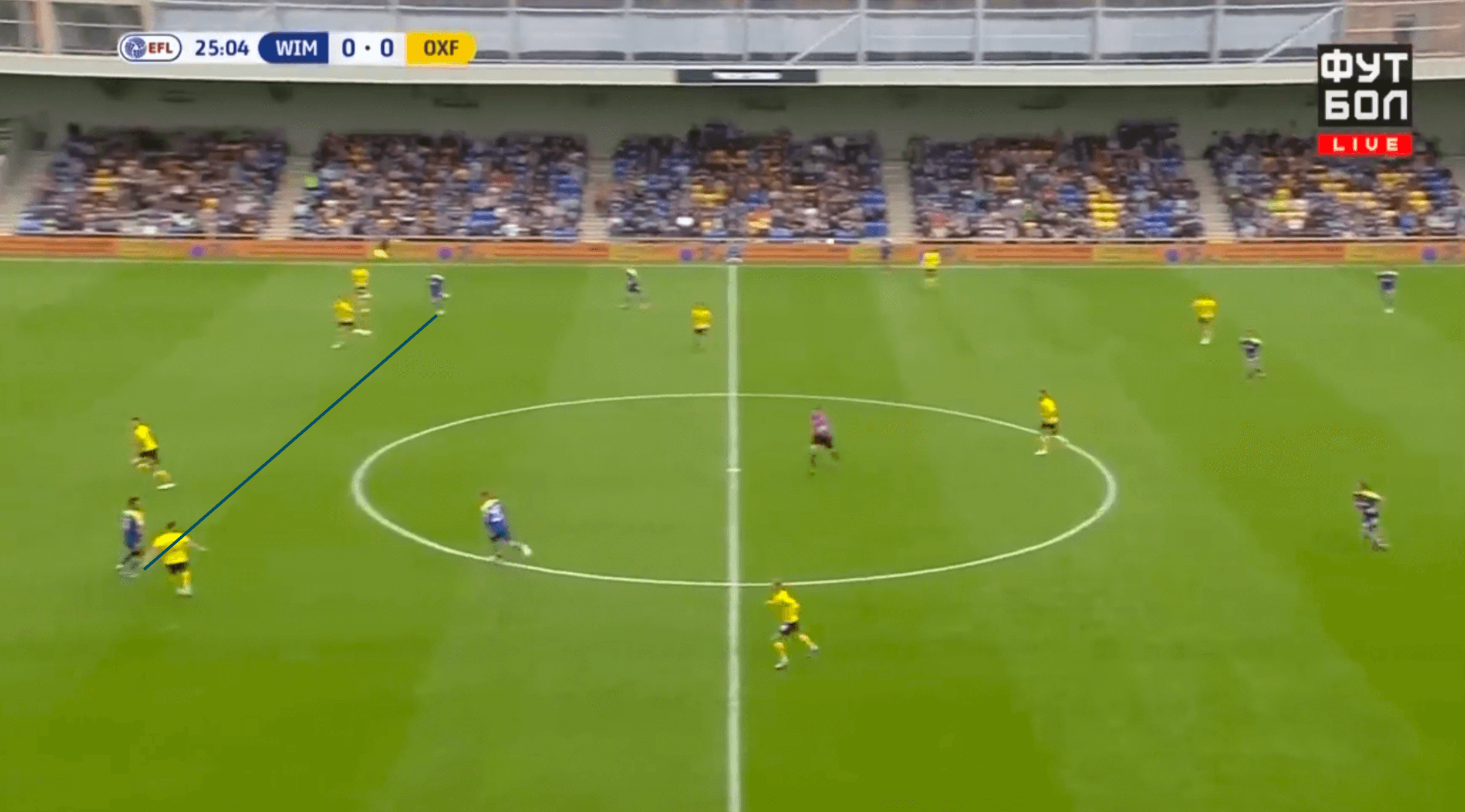 Though the 4-3-3 structure does have its own share of issues without possession, with the ball it’s probably the best formation for teams looking to play due to having the players in good angles from each other and ability to aid rotations seamlessly while also shifting into a 3-4-3  / 4-5-1 swiftly. Oxford did use its system and structure to cause Wimbledon some issues. They predominantly attacked through the right flank as most of their attacks came from that flank. We can see the threat they generated with their actions in the match as most of them come from the right flank with a dark red zone in the wide region. 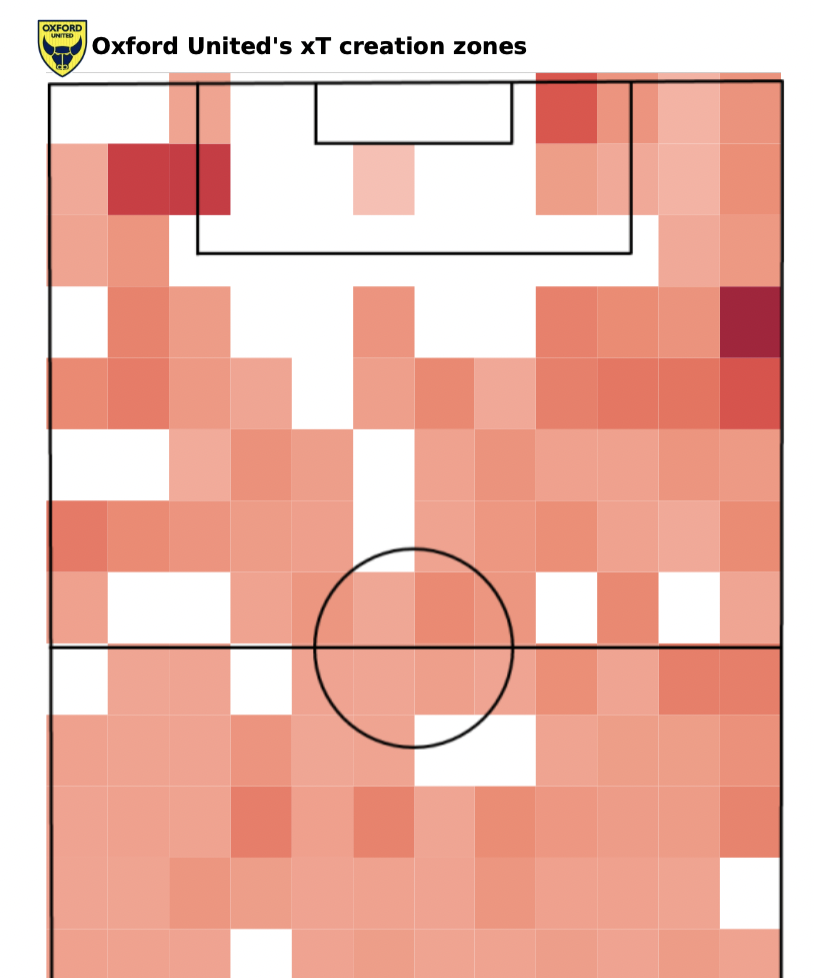 The average positions of the Oxford United players tell us that most of their forwards especially their striker seems to be drifting towards the right flank to combine with their teammates and by rotating their positions constantly on the pitch. 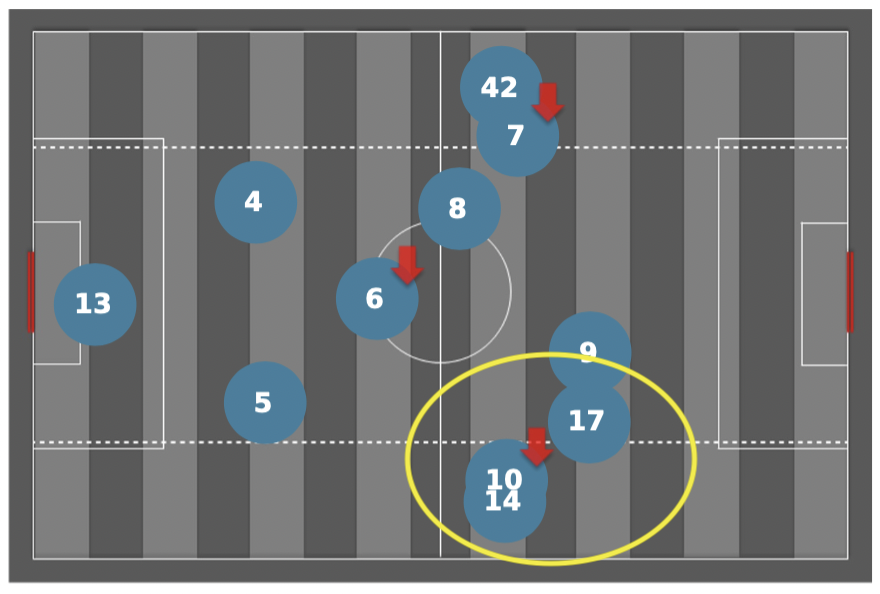 Wimbledon prioritized defending the central regions by looking to block the central spaces. Palmer who played as a CAM would often step up to press the CB or stay deeper to cover Rodriguez. This meant that Oxford had no other choice but to move the ball to the flanks to build their play. The aim was to win the ball in the flanks. 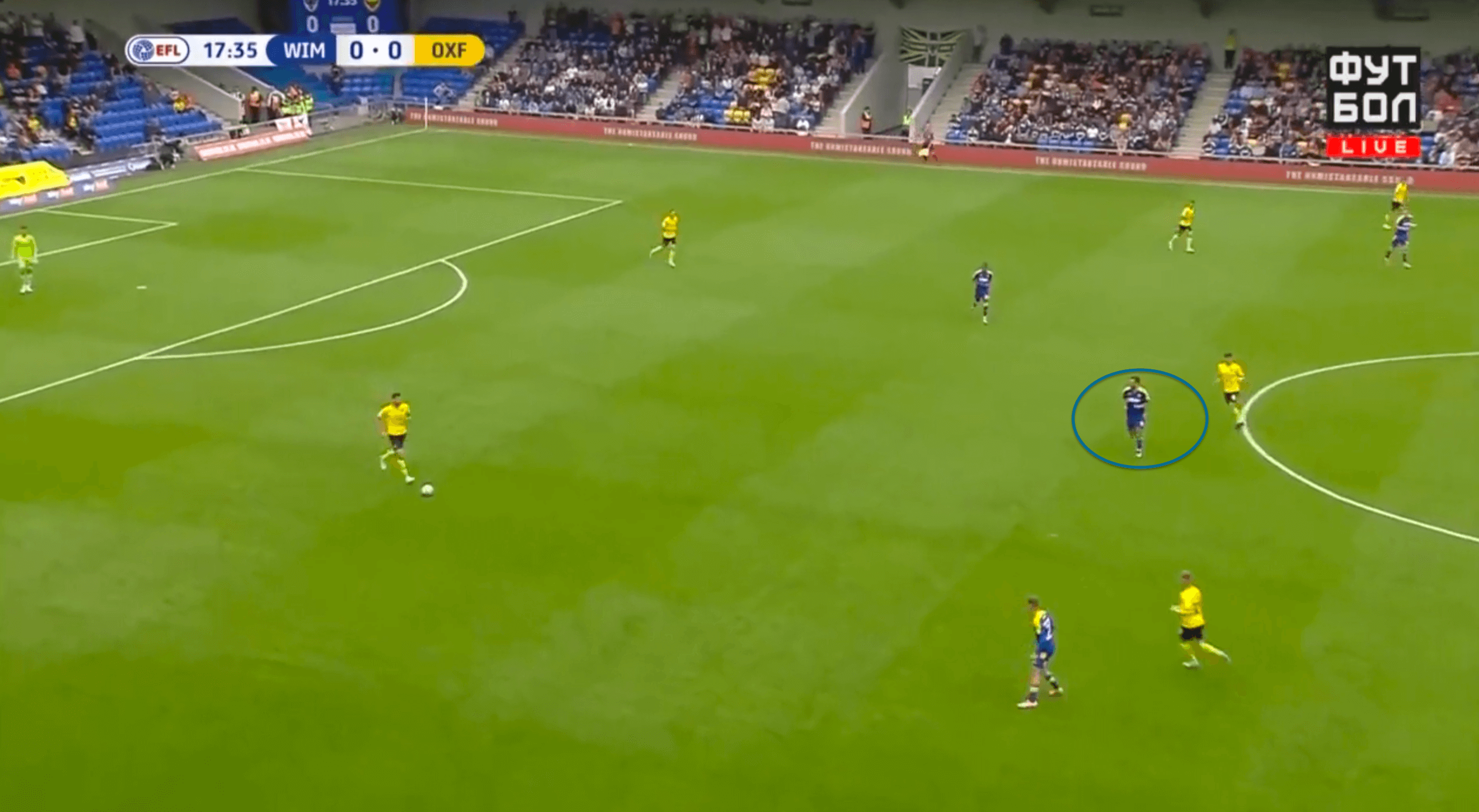 The rotations deployed in the flanks had to be smooth and swift and Oxford United got it right on more than one occasion. The interchanges between Henry, Stykes and Forde was efficient as they were able to combine well and progress the ball upfield. We can see an example of that in the image below where sykes drops deep initially to receive the ball and plays a wall pass back to one of his teammates. Henry meanwhile moves inside and drags the Wimbledon pivot with him which opens the space into which Stykes makes a run into. 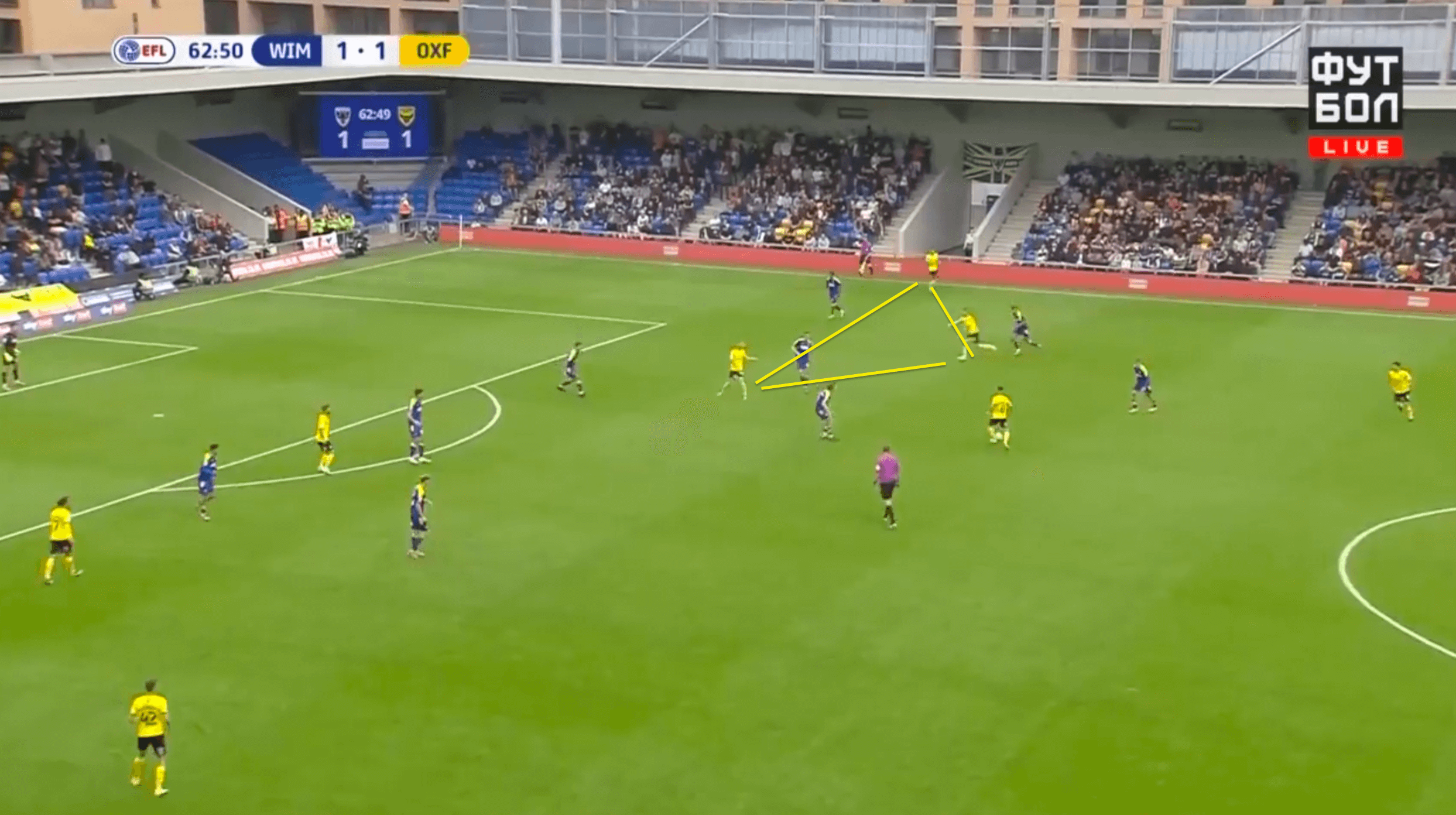 A recurring trend from Oxford United’s games this season has been their response during set-piece situations. They had already conceded goals to dead ball situations which would have definitely caught the eye of Mark Robinson, who decided to expose Oxford’s frailties in these situations and take advantage of that. Their first two goals came from set-pieces and both of them had some unique details in which Wimbledon approached their set-piece.

The first goal came from a free-kick where we can see Oxford playing a mid-line here with a good distance between the line and their keeper. But Wimbledon made a small change to the way they approached the freekick. First, they positioned their tallest players and CBs Nightingale and Heneghan at the far end and with two shorter players of Oxford. Secondly, they had Rudoni (circled) make a run from the deep just when the ball was about to be punted. He made a well-timed run in between two markers as the ball was aimed for towards the far post. Nightingale won his header and played it onto Rudoni who continued his run and nudged the ball into the goal. The deep run from Rudoni and Oxford’s decision to place two short players at the far post were the main reasons behind the goal. 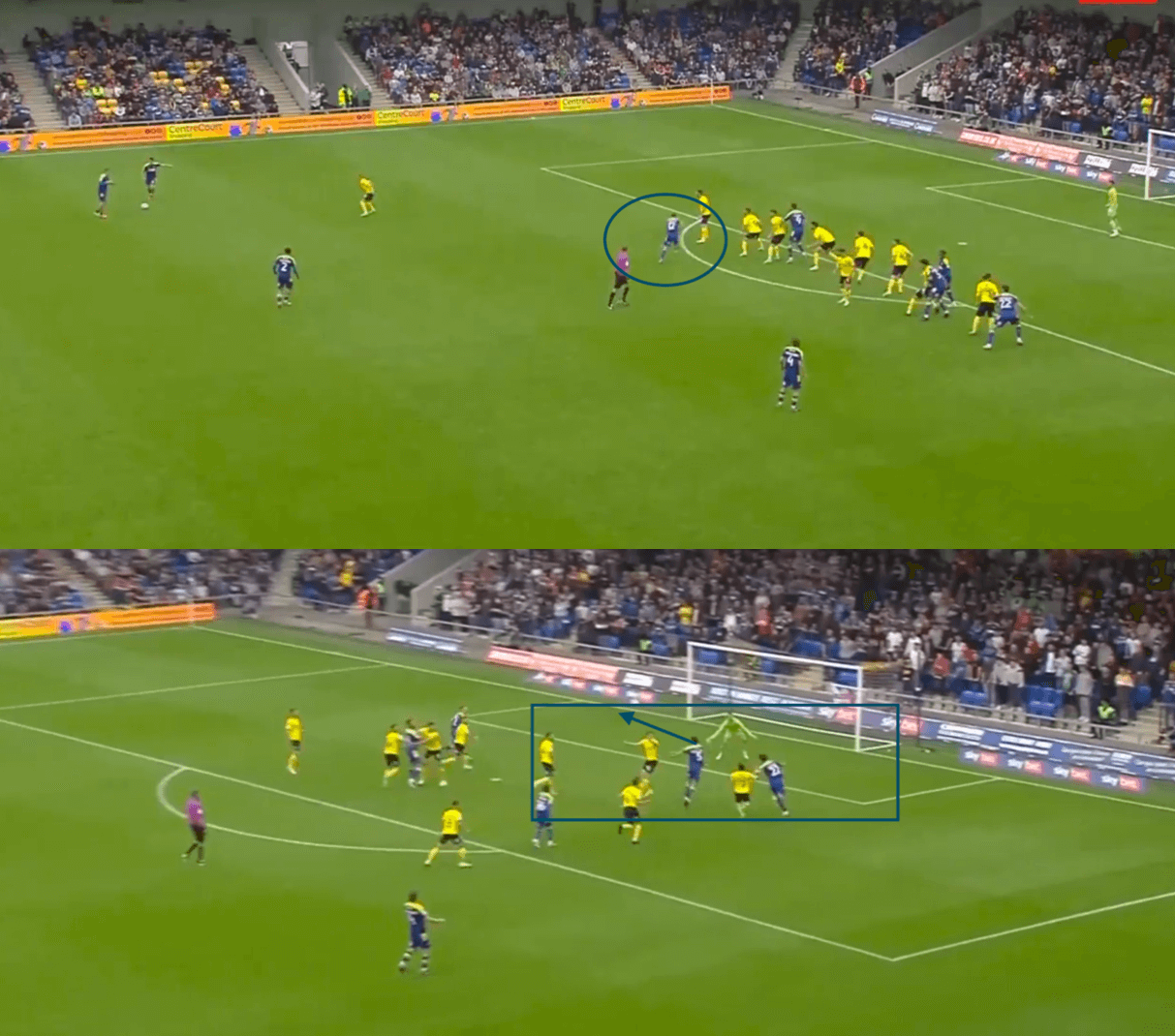 The second goal came from a corner and had another minute detail that indirectly leads to the goal being scored. We can see Oxford United having 4 zonal players and 4 man-man players. Wimbledon used a mix of screeners and blockers for releasing their target man, Nightingale into a good position. The first one of the screeners makes a curved run into the far post that distracts the marker who was keeping constant tabs on Nightingale. Then the other Wimbledon players made runs towards the near post to drag players there and to free the central regions for one of Nightingale or Heneghan to attack. Nightingale eventually won the header to score the goal. 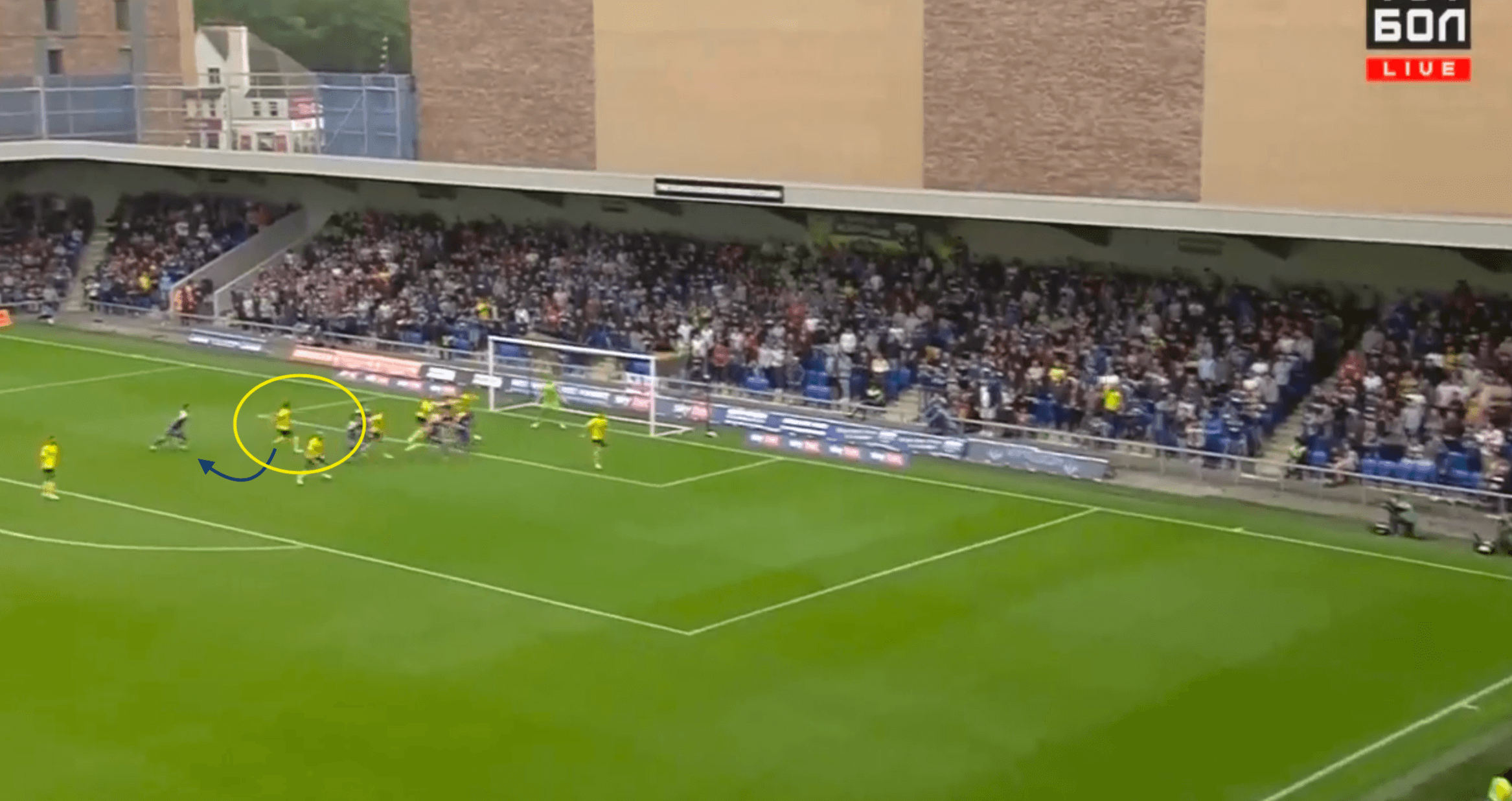 Though both the goals had minute strategies deployed by Wimbledon, it can also be said that the Oxford United players should have done better to be focussed and have maintained much better concentration.

As they were chasing the game now, Oxford United shifted their system by introducing Nathan Holland and Sam Winnall and shifted to a 4-3-1-2 system. This was to add more forwards into the setup and also control the midfield better. 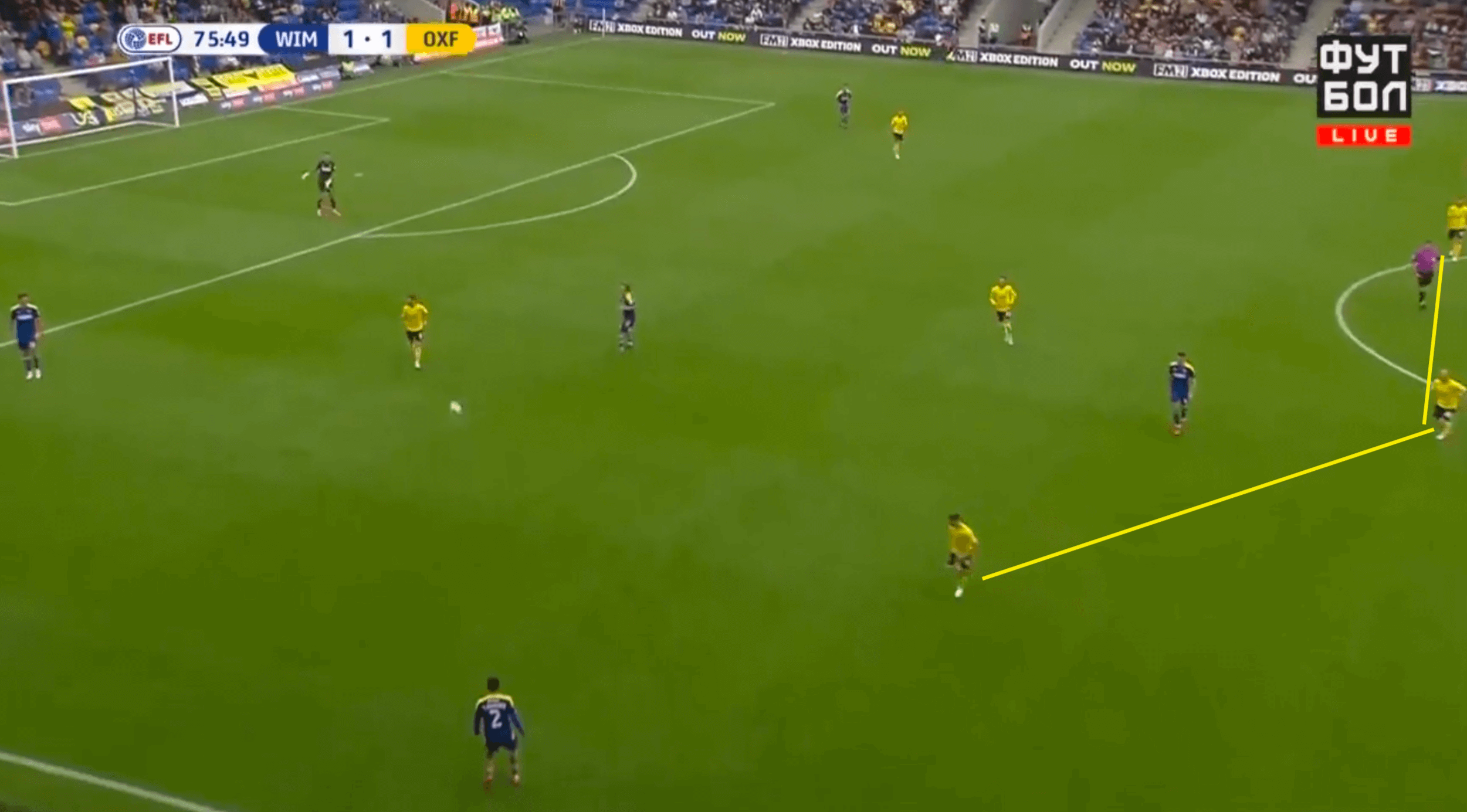 But this gave them another issue as the flanks were exposed due to the higher positioning of the full-back, who now had to provide the width. Wimbledon used this to very good effect and attacked the spaces left behind Oxford’s defence and that even resulted in their final goal.

It was a clinical display from Wimbledon as they came from behind to win the game against Oxford United and also end their winless run. Oxford, meanwhile, have suffered their 2nd defeat in 3 games in the league and would look to get back to a consistent winning run in the league.