Scout report: Is Filip Kostic the key to Allegri’s Juventus reviving their attack?

Juventus started the rebuild of their attack with the signing of Ángel Di María from PSG, whose arrival had an immediate impact on their actions in front of the goal. The Argentine increased the explosiveness in the final third, however, the Bianconeri still looked a little blunt in their efforts.

While he fit the squad well and his partnership with Dušan Vlahović started to show, the team needed better coverage in certain areas to be creative enough and expose their opponents in different ways.

That led to the signing of the winger Filip Kostić from Eintracht Frankfurt who has been described as one of the most prospective attacking players in the last few years. While his name was linked to many big names over the years, he remained in Germany and just now made the move to Juventus in Serie A.

The Serbian arrives after another successful season, scoring seven goals and assisting 15 more in Bundesliga and Europa League combined. His consistency has been impressive and is something that Juventus have lacked in their attacking positions lately. His tactical intelligence and movement could immediately impact their performance on the left and increase Juve’s efficiency upfront.

He made his first appearance in the starting XI in the second round against Sampdoria and despite the 0-0 draw, the Bianconeri stood out with their attacking efforts on the left where Kostić was constantly involved.

In this scout report, we examine Kostić’s strengths through tactical analysis and explain how he can help Juventus achieve consistent attacking performance and fit their tactics.

How can Kostić impact the actions in possession?

The 29-year-old’s movement in the wide areas has had a huge impact on Eintracht’s actions in possession and more specifically their build-up-play. It is expected that he will get increasingly involved in Juventus’ ball progression as well and he will be responsible for carrying the ball to the advanced areas as he did against Sampdoria. Massimiliano Allegri’s team had difficulties exposing their opponents through the wide areas as they mainly relied on the full-backs to join the attack and cross the ball.

Kostić’s pass completion rate isn’t his biggest strength, but he does impact the play with his ability to take on the opposing players and deliver the ball to the advanced areas through his progressive runs and dribbling. Last season, he averaged 3.24 progressive runs per 90 which led to his increased contribution in the final third and often defined the team’s attacking performance.

His 5.76 dribbling attempts would disposition defenders and allow him to reach key areas which will increase Juventus’ chances to have more crossing attempts from the left. He can supply the box with more quality balls which will increase their chances in front of the goal, as they won’t be relying only on creative passing to disrupt the opposing backlines. His technique allows him to escape pressure and get the ball out of danger, which will decrease the number of balls Juventus lose in the advanced areas.

Juventus would often lose possession on the flanks due to the lack of composure in their offensive duels. Kostić’s presence there will provide better coverage of these areas and increase their efficiency. His pace and precision make him difficult to defend against.

His movement also decreases the risk of having Alex Sandro exposed defensively due to his attacking involvement. The Serbian often drops back to pick up the ball so he will be able to combine with the full-back and give the team more confidence to roam forward. Once he carries the ball to the final third, his distinguished crossing could make the difference for the team in a split second. His frequent crossing attempts combined with Vlahović’s strong positioning could have an immediate impact on Juventus’ goalscoring record. 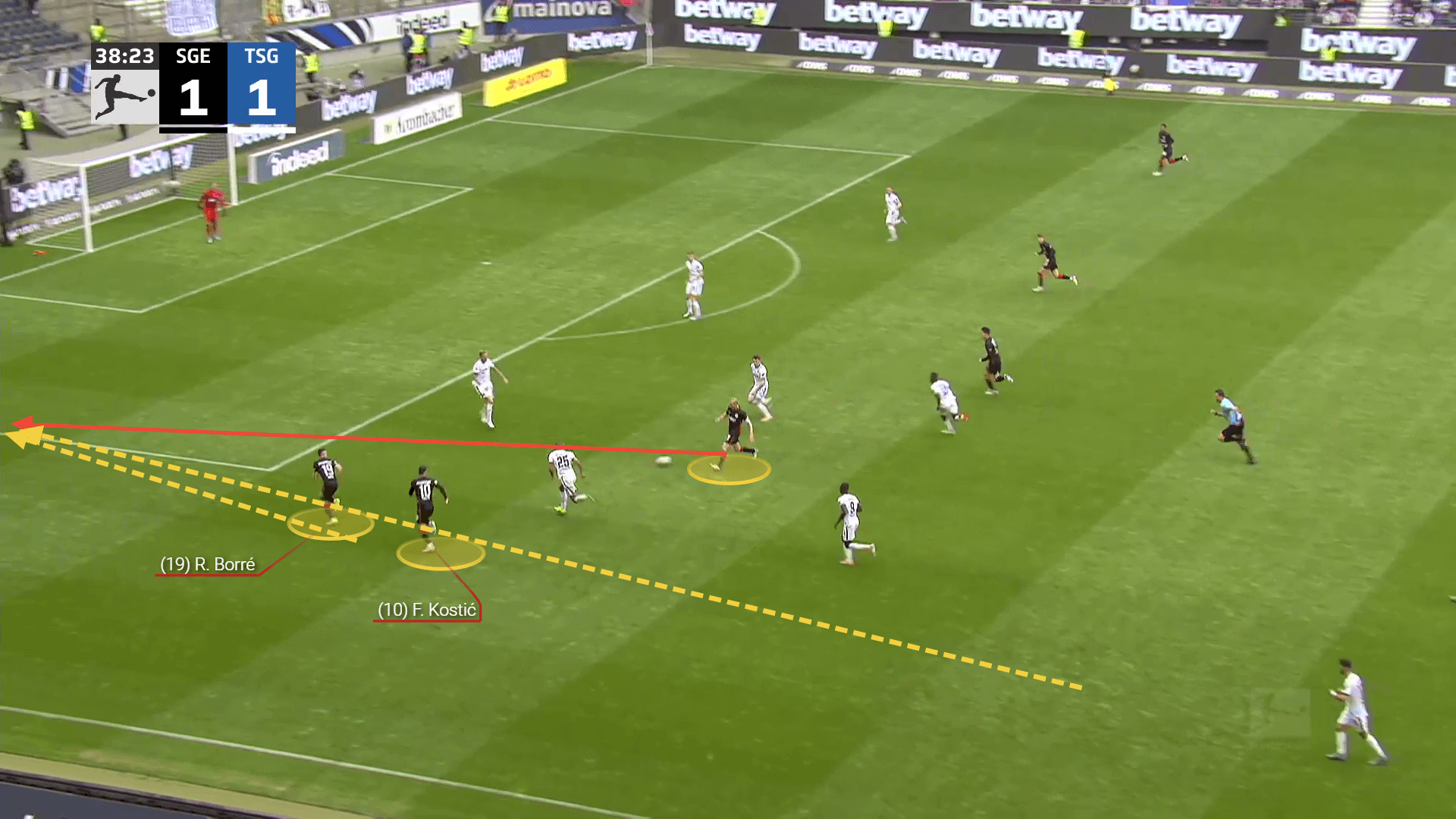 He then demonstrated his pace by quickly reaching the edge of the box so he can receive. 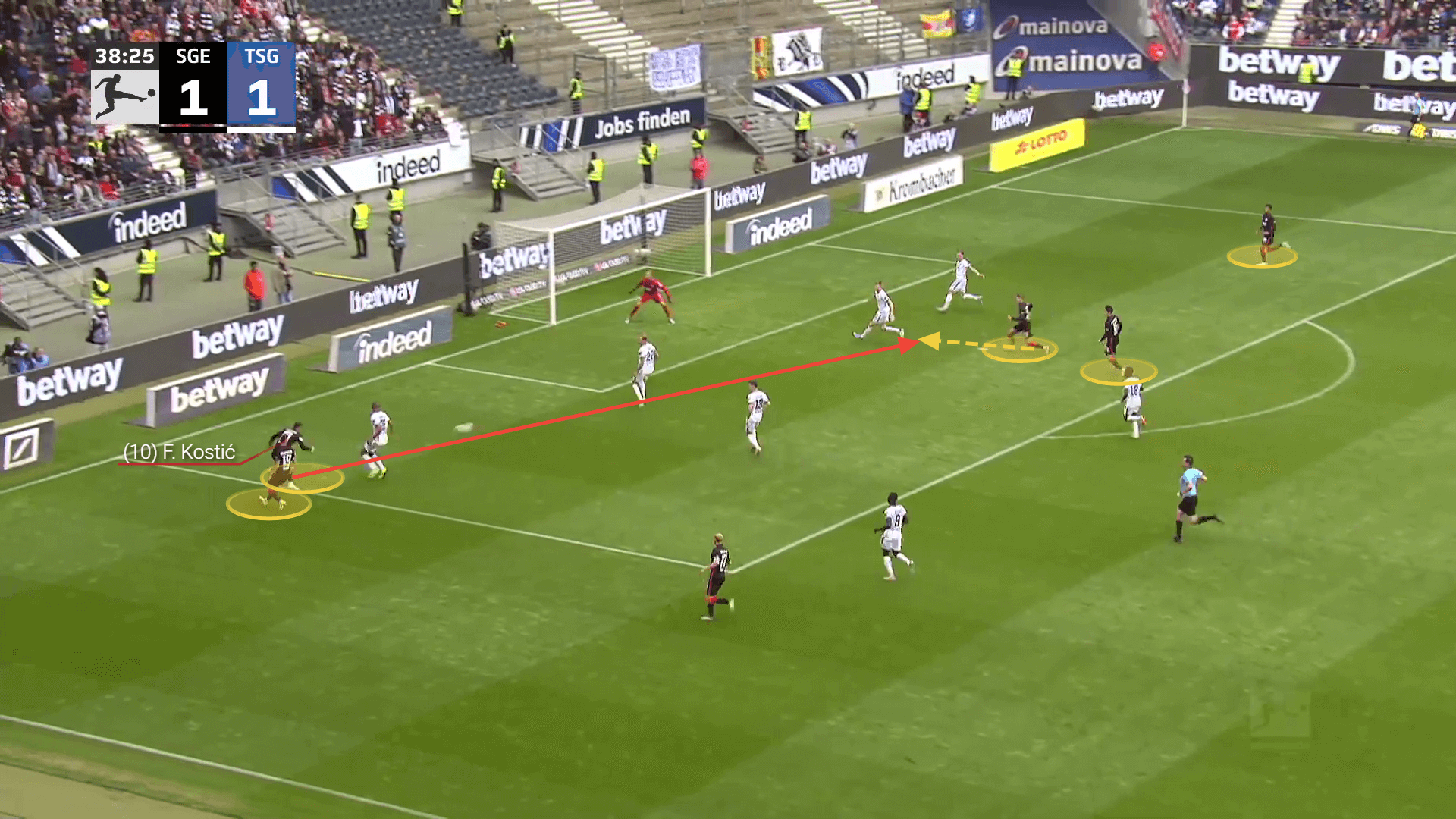 Once he received he opted for a sharp cross directly to the unoccupied central areas and eventually assisted the goal.His successful contribution is a result of an underlined spatial awareness and judgement as he is always aware of his teammates’ positioning and can easily identify the best attacking solution, being a cross, a smart pass or cutting inside with the ball. His decision-making is what might set him apart at Juventus as he is able to take advantage of the opportunities created.

He likes to stretch the ball out to the flank in order to engage opposing players and open spaces for his teammates centrally, where he can deliver the ball and support the attacking actions. He can easily adjust to the other attackers’ movement and complement their actions and while he can also be a direct threat, he prefers to support them through his key passing and create opportunities for them.

Apart from his supporting role, Kostić can also provide a direct threat to the goal. While the frequency of his shots is not too high, his movement to the half-spaces can help the team overload the box and engage players, which certainly helps in freeing up spaces.

His occupation of the half-spaces shows his positional awareness as well, as he often moves into quality positions to be able to score. He produces shots both from distance and from close range, although he has been more efficient from the penalty area.

Whenever the team are trying to expose the opposition through the right side, he moves as an additional body around the box so he can eventually make a run off the ball and threaten the goal. He can also expose the opposition on speed making him a great option for a switch of play. Whenever he is in the underloaded area and receives the ball, he tries to quickly progress it to the box and score.

He is a tricky player to defend against and often catches the defenders off guard by shooting from a difficult angle. He would often reach the edge of the penalty area on the left and surprisingly shoot, instead of passing to his teammates.

The Serbian can also increase Juventus’ efficiency in attacking set-piece opportunities. His precision and confidence often result in creating goalscoring chances through free-kicks and corners. He can easily identify his teammates’ movements and supply them with quality balls but can also directly score.

Can he contribute defensively?

The 29-year-old’s main defensive quality is his ability to retain possession and carry the ball forward through multiple defenders. His composure will allow the team more time on the ball as they have often struggled under pressure. Juventus’ highest percentile of lost balls was exactly in the left-sided areas, making Kostić a valuable addition to the squad. Not only because of his own actions but because his presence will provide players like Sandro with more time to move defensively.

Last season he averaged a 56.9% success rate in his defensive duels which shows his determination to support the team off the ball as well. While the Bianconeri are not an intensely pressing team, Kostić can support their actions through his ball recovery efforts, especially if they involve in high pressing. The player averaged 4.9 recoveries per 90 last term, which is a rather high number having in mind his attack-minded role.

He often forces the opposition into mistakes through his smart positioning and ambition to win the ball back. His recovery efforts can be equally as important for their attack as for their defensive actions, as thanks to them the team can quickly transition and create goalscoring opportunities by catching the opposition off-guard.

As our analysis shows Kostić’s presence in attack could be extremely valuable for Juventus. The team have often been lacking efficiency in the left-sided areas, which makes the Serbian’s arrival a much-needed one that will help them have better coverage in the opposition half and increase the frequency of their actions in the final third.