The 2022–23 campaign is the 124th season in the existence of AC Milan and the club’s 89th season in the top flight of Italian football. In addition to the domestic league, Milan are participating in this season’s editions of the Coppa Italia, Supercoppa Italiana and UEFA Champions League.

As their Serie A rivals attempt to turn back time, champions Milan are looking to the future. Romelu Lukaku, Inter’s 2020-21 Scudetto hero, and Paul Pogba, the winner of four straight championships at Juventus, have returned to their former clubs following ultimately unsuccessful Premier League stints.

Of course, this is a move that worked for Milan last season, as Zlatan Ibrahimović had played for three different clubs in three different countries between featuring in the Rossoneri’s two most recent title-winning campaigns. Ibrahimović, soon to turn 41, has signed up for another season, but there is a young, exciting core to the Milan team who secured that latest title and will now bid to defend it.

In this data analysis, we will screen Milan’s squad structure. Adding to that, we will take a closer look on the statistics and data of some key players in Stefano Pioli‘s current team in this analysis.

Milan had the fourth-youngest average age of their starters in Serie A last season (25 years 337 days), older only than Empoli (24 years 325 days), Spezia (24 years 334 days) and Torino (25 years 189 days). And this average was dragged up significantly by Ibrahimović and Olivier Giroud.

Among the 10 outfield players to start 20 or more league games for Milan in 2021-22, nine were below that average age at the end of the season, with Giroud (35 years 233 days) the exception.

Giroud scored 11 goals, including two the day the Rossoneri won the title at Sassuolo, but even he made only 22 starts as Stefano Pioli showed faith in his young charges.

Pierre Kalulu (21 starts) was 21 years of age on the final day; Rafael Leão (31 starts), Sandro Tonali (31 starts), Brahim Díaz (25 starts) and Alexis Saelemaekers (22 starts) were all 22; Theo Hernández (30 starts) and Fikayo Tomori (30 starts) were both 24; and the now-departed Franck Kessié (25 starts) was 25 years old, along with Davide Calabria (24 starts). Of those, only Díaz was not in the starting XI against Sassuolo, with the 28-year-old Rade Krunić preferred.

That this young Milan side held their nerve on that day – needing to avoid defeat to ensure they could not be pipped at the post by Inter – justified Pioli’s approach, and the club have seemingly sought to get even younger ahead of their title defence. 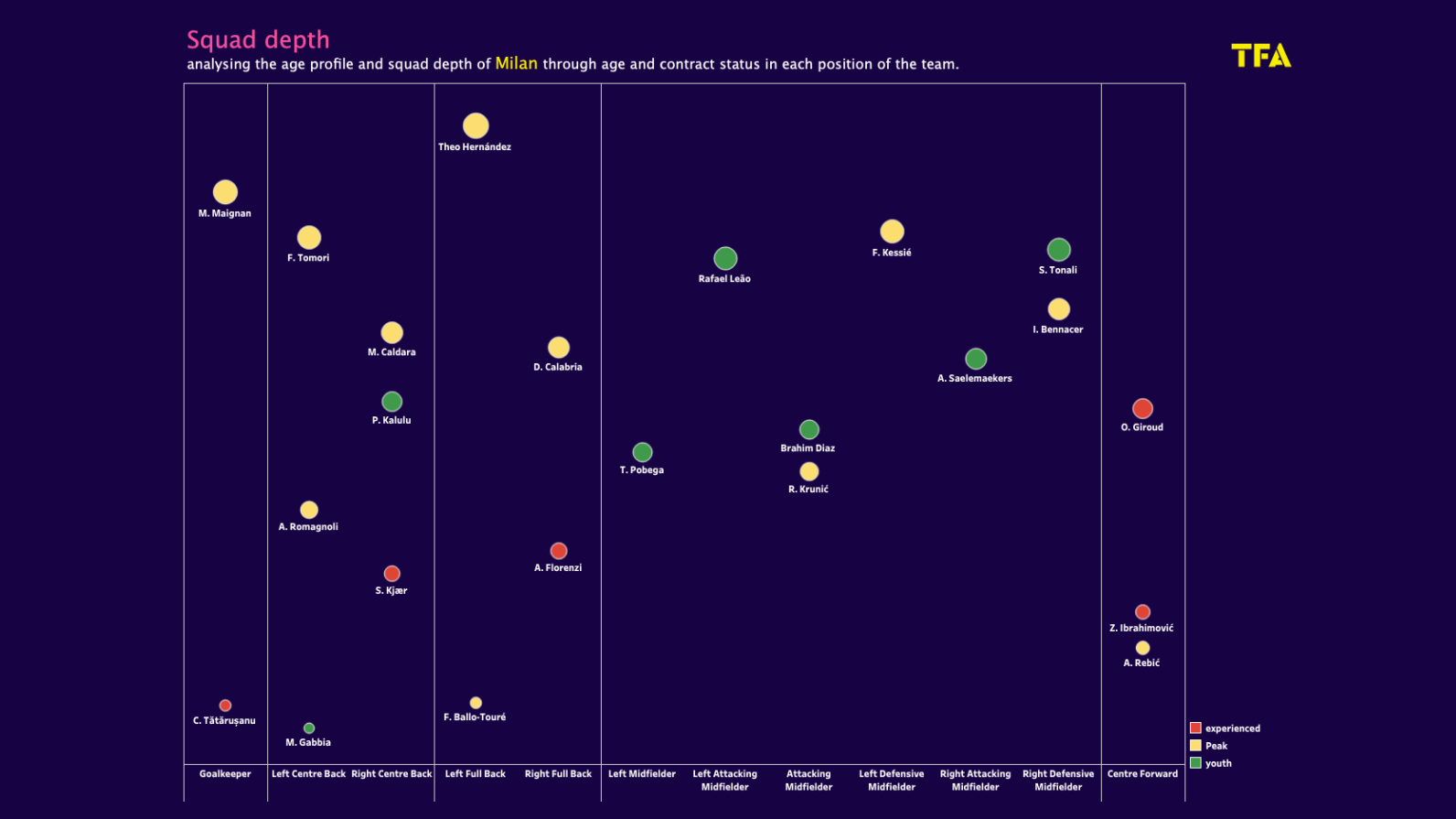 Milan’s title winners will undoubtedly benefit from their 2021-22 experiences, too. Leão (85), Tonali (60), Díaz (47), Saelemaekers (45), Tomori (34) and Kalulu (13) had each played comfortably fewer than 100 games in Europe’s top five leagues heading into the previous campaign. Kalulu had tallied a mere 727 minutes prior to his breakout year.

In the Champions League, they were even greener. Besides Giroud, who had played 41 games and started 25, those nine other Serie A regulars had made just 11 combined appearances and five combined starts in Europe’s elite club competition up to that point.

Milan’s European campaign did not pan out as they would have hoped, losing their first three group stage matches and finishing bottom of the table in a punishing pool, but there was a dramatic away win at Atlético Madrid, and the Rossoneri twice took the game to eventual finalists Liverpool.

Realistically, given the financial power of other clubs across Europe, Milan have had little choice but to pay for potential rather than proven performers.

Yet their early moves in this offseason sought to find a blend of the two, as Milan chased on two stars of Lille’s shock 2020-21 Ligue 1 title success. Centre-back Sven Botman, only 22 years of age, was a favourite of Paolo Maldini, while Renato Sanches, somehow still 24, appeared a good fit for a midfield set to be robbed of Kessié following his move to Barcelona as a free agent. Unfortunately, Newcastle United and Paris Saint-Germain – backed by Saudi Arabia’s PIF and Qatar’s QSI respectively – outmuscled Milan in both cases.

Instead, Kalulu is set to start regularly again alongside Tomori, and Tommaso Pobega, returning from a loan at Torino and now 23 years old, is a likely replacement for Kessié.

With a height of 179 cm and a weight of 69 kg, Kalulu is not a typical centre-back. As already mentioned, before his arrival at Milan, he mostly played as full-back. This is a disadvantage that shows up in his defensive statistics. However, while his general duel rate and his aerial duel rate are way below average, the Frenchman excels in defensive duels. With 8.98 defensive duels per 90, he completes more than 89.3% of all Serie A centre-backs. Adding to that, he wins 71.92% of his defensive duels. 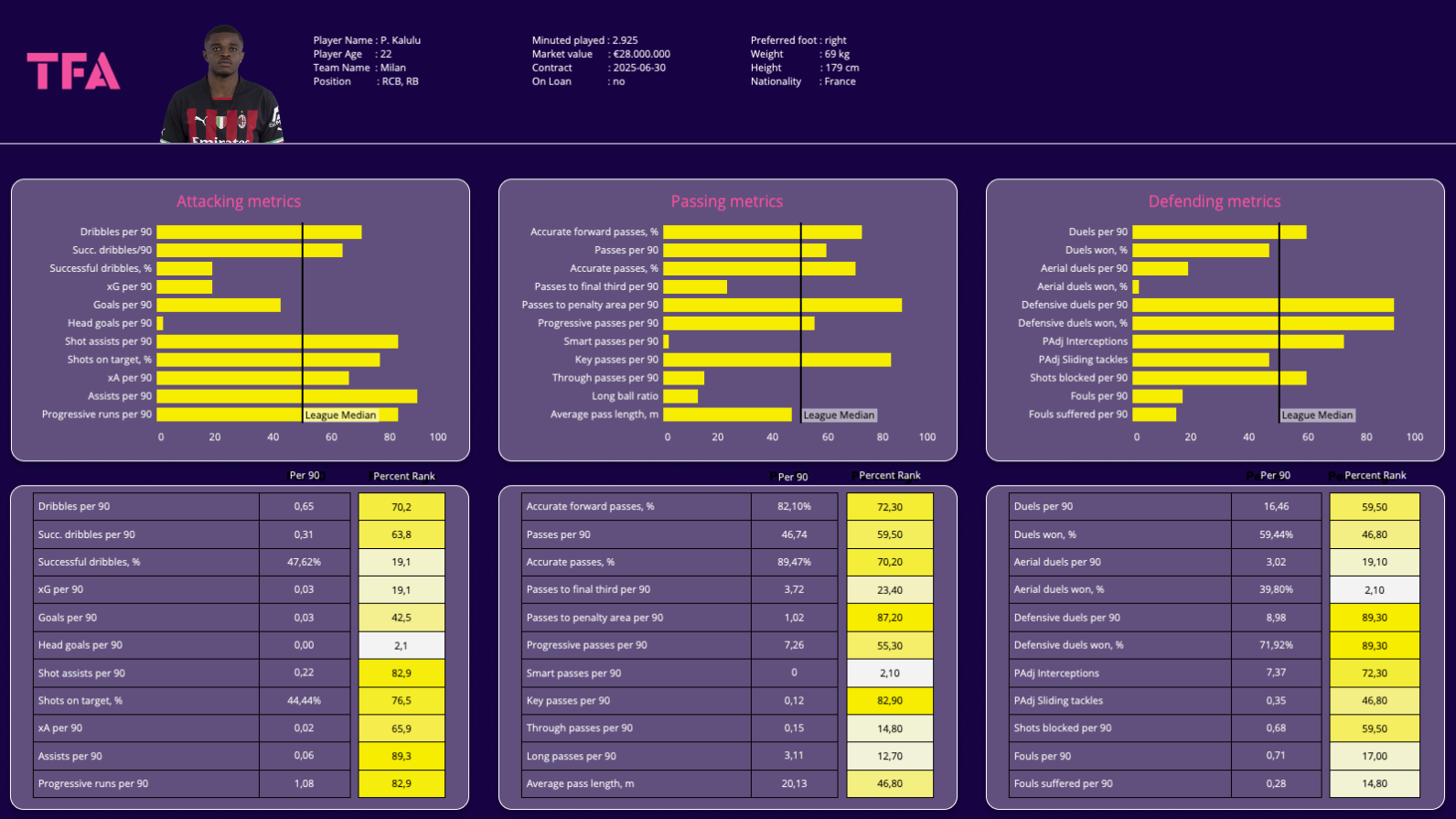 Milan have preferred to focus their limited budget on the attack, successfully holding off rival interest to sign Charles De Ketelaere. The Belgium international, who turned 21 in March, contributed 14 goals and nine assists in 39 First Division A matches for Club Brugge last term. De Ketelaere was the second-youngest player in the Belgian top flight to tally at least five goals and five assists for the season – after Anderlecht’s Bayern Munich loanee Joshua Zirkzee (16 goals, nine assists). He will now link up with Leão (11 goals, eight assists), who was the second youngest to achieve that feat in Serie A in 2021-22 – after Sassuolo’s Giacomo Raspadori (10 goals, five assists).

De Ketelaere is a versatile player as you can see on his heatmap below. Milan see him as a player that can kill several birds with one stone. They would like to upgrade at right-wing and Number ‘10” positions because head coach Stefano Pioli typically uses a 4-2-3-1 formation, and De Ketelaere has played in both of those roles for Brugge. Playing as number ‘10’ or number ‘8’ in Pioli’s 4-2-3-1 might be the best positions for De Ketelaere. He is a highly versatile player that is yet to reach his peak and find his strengths, while Pioli now has the freedom to mould him into a player that is a perfect cog in his system. Besides his long list of impressive attributes, young De Ketelaere has also racked up priceless experience in the Champions League. 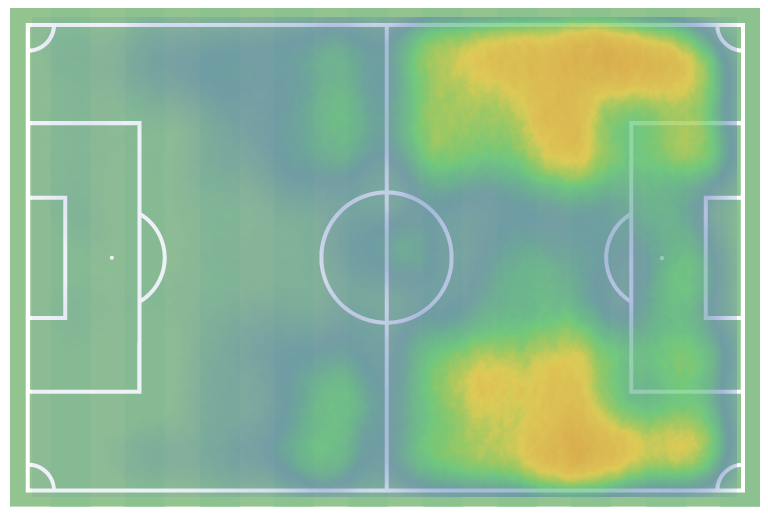 Even De Ketelaere’s Belgium team-mate Divock Origi – another new forward signing and set to become Milan’s latest experienced option up front – is only 27 years old. He is a player who lives for the big occasions, 11 of his 41 goals for Liverpool have been game-winning goals. Origi is a versatile forward who can play anywhere across a front three. However, he is the best whilst deployed as a striker. He has good size (185 cm), pace and intelligence.

He might also need some time to get into the Italian way of football, Milan’s system, and the overall culture in Italy which differentiates itself from the culture in England – but when all that is accomplished Origi will show his class in the Rossonero shirt.

The signing of Origi, an elder statesman in the Milan dressing room, would actually have made Serie A rivals Juventus (27 years 319 days) and Inter (29 years 73 days) younger. Indeed, Inter were the third-oldest team in Serie A last season – after Sampdoria (29 years 212 days) and Lazio (29 years 217 days) – with their squad already in need of regeneration a year after winning the Scudetto.

There is no danger of Milan being in the same position, with their young side getting younger and extending their window in which they can expect to contend for further titles. The Rossoneri were comfortably the youngest champions across Europe’s top five leagues last season, with La Liga and Champions League victors Real Madrid (28 years 95 days) the oldest.

AC Milan are on an excellent way to get back to old days – but with young players. They definitely have the squad to defend the Serie A title this season. However, with rivals Internazionale, Juventus and also AS Roma, the competition is big again. With more demands in this year’s UEFA Champions League season, there is an increased pressure on the young squad full of potential. It remains to be seen whether they can handle it or not.

There may be departures along the way – and Milan will hope to receive a fee, unlike in Kessié’s case – but this team should continue to grow together. If Milan’s players progress as they have done so far, there will be plenty more title challenges – and perhaps even a tilt at an eighth European crown soon enough.