Despite it being a very aggressive battle with many fouls and failures under pressure, the Copa Libertadores final between Palmeiras and Santos offered some interesting tactical decisions.

Due to the lack of precision from both teams and their aggressive defensive actions, they didn’t manage to score in the full 90 minutes, but Palmeiras took advantage of their opportunities in the stoppage time and won the competition.

Abel Ferreira’s team dominated the game and despite Santos’ efforts to keep up with the tempo, they reached the wanted result and lifted the cup.

Extremely committed to their defensive actions, both teams were constantly aiming to recover the ball and expose the opposition immediately. While their attacking strategies were different, the ends result was almost the same – a few imprecise shots that could’ve decided the outcome of the game a lot earlier if the attackers were more solid under pressure.

The press intensity from both teams was impressive and while Santos were dominant in that indicator and had more of the ball, they didn’t manage to use this advantage and capitalise on their chances.

In this tactical analysis, we examine both teams’ tactics and follow the tactical decisions that led to Palmeiras’ triumph.

The 42-year-old Abel Ferreira relied on Weverton on the goal, with Matías Viña, Gustavo Gómez, Luan and Marcos Rocha in defence. The central areas were covered by Zé Rafael and Danilo while Rony and Gabriel Menino were responsible for the wings, although they would often tuck in and occupy the half-spaces. Raphael Veiga supported Luiz Adriano in attack. Veiga was one of their key players in attack and managed to threaten the goal on a few occasions. This was mainly possible thanks to Danilo’s ball progression involvement and long ball efforts.

They were main figures in their build-up and attacking movement which resulted in Palmeiras creating most of their positional attacks through the right flank or the central areas. Their positioning in the half-spaces was beneficial for their efforts in the final third. Even the ex Juventus and Inter player Felipe Melo got some playing time at 37 years of age.

On the other side, the experienced Cuca picked John as the goalkeeper and a four-man defensive line of Felipe Jonatan, Luan Peres, Lucas Verissimo and Pará, who despite their successful performance throughout the game, fell victim of their own mistakes and allowed a goal in the 99th minute of the game.

The centre-midfield was constructed of Sandry, Alison and Diego Pituca, while Yeferson Soteldo and Marinho joined Kaio Jorge in attack. As we will discuss later in the analysis, Santos’ press intensity allowed them to steal the ball quite frequently which resulted in having a higher share of the possession. That didn’t result in many opportunities though as their connection between the lines as well as individual skill weren’t enough for them to score. The ex-club of the PSG star Neymar did take the initiative in the second half but their efforts were too inaccurate and didn’t result in many shots on target.

Initially, Palmeiras were the team to press high and try blocking the passing lanes. They would put efforts in troubling Santos’ build-up from the back and push back their considerably highly positioned backline. This would often result in Santos involving the goalkeeper as a ball progression option, in efforts to bypass the press and advance the ball.

As they tried to break through the wide areas, Palmeiras would overcommit to their defensive actions on the side and make sure they limit their opponents’ space for movement, immediately trying to win the ball back. This forced Cuca’s side to seek other options in their build-up, which resulted in relying on a switch of play so they can bypass the press and exploit the spaces on the other side of the pitch that occurred from their opponents’ movement.

While Palmeiras were quite aggressive in their defensive actions, their narrow positioning allowed the opposition a few chances where they were able to drag players out and create some gaps. Despite their structure being risky though, allowing a lot of crossing attempts by Santos, it helped them in keeping their opponents away from the box and they secured their goal quite well.

While it was expected that their high press would aim ball recovery in the advanced areas, but they focused their aggressiveness on the edge of their own third, where they would push the opposition and gain back possession. Their energy and movement off the ball were crucial for blocking Santos’ creativity and stealing the ball from the opposition. Their aerial superiority was key in their defensive actions too. They won 53.19% of their attempts and managed to clear the ball in dangerous areas quite frequently thanks to their aerial presence.

Santos were lacking the connection between the lines that initiates creativity and this made them ineffective against Palmeiras’ well-organised defence. Although that changed in the second half, where they found their way to the goal on a few occasions, their inaccurate shots would waste those chances.

Imprecise work under pressure cost both teams a lot

It is safe to say that both teams’ efforts to pressurise each other were successful, although it resulted in a lot of interruptions after foul plays. Both teams were overcommitted to their defensive responsibilities and managed to make each other’s efforts on the ball ineffective on many occasions. Not only the players carried the pressure of playing in the final but they also had to deal with the constant pressure by the opposite team, which immediately affected their performance in the advanced areas.

Palmeiras and Santos couldn’t create many opportunities in front of each other’s goal due to the concentration of bodies in those areas, and even if they did, they overcomplicated things and often ended up losing the ball. The attackers were often too hasty in their actions and would hurry with a pass or a shot, resulting in inaccurate efforts. Both team’s passing accuracy rate was rather low which was also a part of their unsuccessful attacking performance.

Palmeiras’ performance was poorer and cost them a lot of lost chances with their 77.39%. They were keen on delivering the ball to the advanced areas as soon as they win it back which expectedly led to more risky long balls or quick passes that wouldn’t always reach the destination.

Santos had more of the ball but that didn’t help them in calming down and being more precise. They saw a few failed attempts in attack as a result of their inaccurate crossing or long ball efforts.

Santos time on the ball (61% of possession) wasn’t gifted to them. It was a result of their continuous and intense pressing efforts that saw Palmeiras lose the ball quite frequently. They wouldn’t hesitate to dive into a defensive challenge and physical contact which helped them in gaining back possession and compensating the disadvantage in the individual skills between them and the opposite players.

The Black and Whites finished the game with the insane PPDA rate of 4.54, which clearly shows their press intensity and aim to win the ball back as quickly as possible. This means they allowed Palmeiras only 4.54 passes in possession on average before challenging them with defensive actions. Seeing that it would be hard to advance the ball and create quality chances that way, Verdão had to adjust and find a way to attack effectively avoiding the opposition’s press.

While that press intensity helped Santos a lot throughout the game, it turned out as one of the main reasons for Palmeiras’ successful attacking actions. It forced them into direct play, which turned out to be beneficial for the team. They were looking to advance the ball as quickly as possible, relying on long vertical passes to the attackers in aim to dismiss Santos’ defensive efforts and exploit the final third successfully.

A combination of inaccurate finishing actions and rather solid last line of defence kept Verdão away from converting their chances into goals. In fact, they did get tired by the opposition’s constant pressing and allowed them to expose them in a similar manner on a few occasions in the second half. That didn’t stop them from sticking to that strategy and they were rewarded in the 99th minute when one of Santos’ very few failed pressing attempts resulted in a perfectly measured cross from Rony, who provided his eight assist in the competition and helped Palmeiras win the game.

Both Palmeiras and Santos had their moments throughout the final, and while Santos started more hesitantly, they did build their confidence and had good chances in the final minutes. An eventful stoppage time and the loss of concentration resulted in them being defeated after another Palmeiras’ long ball efforts that finally found the net.

The game was frequently interrupted by both teams’ defensive aggressiveness but despite being far from a beautiful game to watch, it was an example of how your high press intensity and ball possession rates don’t mean that you control of the game. 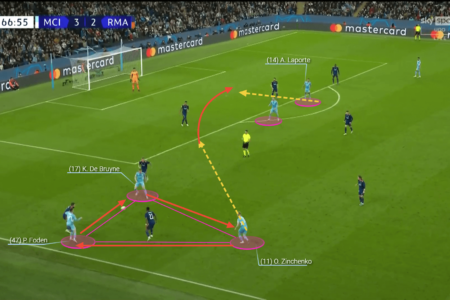