Much of Everton Women’s limelight has been hogged by players like Chloe Kelly, Simone Magill, Inessa Kaagman and Lucy Graham. The star signings of Izzy Christiansen & Hayley Raso will no doubt challenge other teams of the FAWSL as a lineup studded with big names. However, in this scout report, I shall focus on Chantelle Boye-Hlorkah, a hard-working player who isn’t a highlight of the lineup, but has been pivotal both offensively and defensively to Everton’s campaign this season.

In my previous tactical analysis of Everton Women, I focused on their pressing and how their defensive organisation and tactics play a major role in managing transitions, playing with a high defensive line and setting up the opportunities for attack. Chantelle Boye-Hlorkah is a key figure from the front who leads Everton’s pressing and runs the inner and outer corridors for Everton Women. She is also a prolific crosser and dribbler of the ball and positionally versatile as a winger. In this scout report, I shall use statistics and moments from previous fixtures for an analysis of the player profile of Boye-Hlorkah.

The 24-year-old English winger is a product of Everton’s Centre of Excellence and was drafted into the first team in 2013 at the age of 17. She has also made appearances for the national team at U-17 and U-23 level. Under manager, Willie Kirk, she has made significant progress especially this season.

She is around 170cm tall giving her a good physical presence against opposition fullbacks. Her key attributes are her defensive work rate, crossing, passing and dribbling. If we take a look at her heat map this season, we see that she mostly operates on the flanks.

Kirk opts to deploy Boye-Hlorkah as a left attacking midfielder as part of the 4-2-3-1 system that has been mostly used this season. Boy-Hlorkah has also played on the right side in the same system, as a left-winger in a 4-5-1 system and briefly as a centre forward against Brighton. She also filled in the role of a right back in the midst of substitutions against Manchester United in her latest game. This shows her tactical versatility in all of the forward positions and the wing.

She is tasked at applying pressure from the top as Everton sit in a mid-block press, awaiting the moment to use her pace and burst forward in transitions. She also covers a lot of ground tracking back defensively with the objective to get as many bodies behind the ball quickly in defensive transitions.

She has strengths in all technical foundations of the game making her an asset in every phase of play and a threat to the opposition. She receives an average of 13.18 passes per 90 and makes 2.42 progressive runs per 90 and 3.94 progressive passes per 90. Besides this, she averages 4.17 interceptions per 90 and 3.23 recoveries per 90. These stats show that she is quite consistent both offensively and defensively. 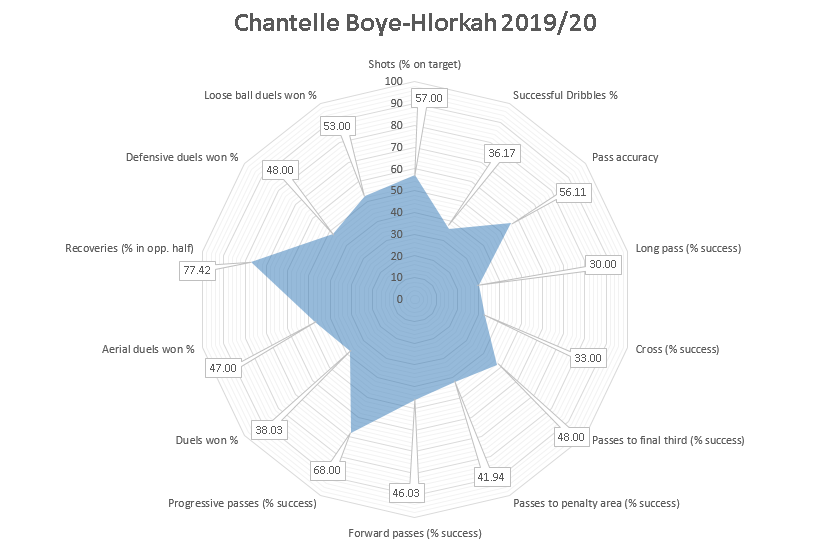 Although she hasn’t added to her goal or assist tally in the FAWSL yet, she carries an xG figure of 0.76 and an outstanding xA of 1.31 because of her actions in the final third. Her crossing and dribbling abilities in the final third are exceptionally good and we shall look into them in detail in the following sections. Below, we also see that she leads Everton Women in terms of dribbles averaging 5.4 per 90.

In Willie Kirk’s system that involves a disciplined and tenacious attitude in the defensive organization to give opponent’s no time to breathe, the forward players are required to have strong defensive assets to lead the press from the front. While the responsibility to score goals falls on players like Kelly and Magill, Boye-Hlorkah provides the defensive spearhead for her teammates to push for every opportunity to transition into attack.

She leads the team in terms of recoveries in the final third as we can see above, and this is because she engages in the highest number of defensive duels from the front, after Magill. 77% of her total recoveries are in the opposition half. She also actively engages in pressing the opponents from behind enabling her to recover the ball and lay it off to her defenders. She is also very strong at winning aerial duels and as we can see in this game against Manchester United. Note how many of them were attempted and won in the opposition half.

If we compare the number of interceptions she makes per game with that of Everton, we see her significant contribution defensively to the team. I’ve picked those games that she has played 90 minutes, and it’s clear how big of a defensive presence she is for Everton. 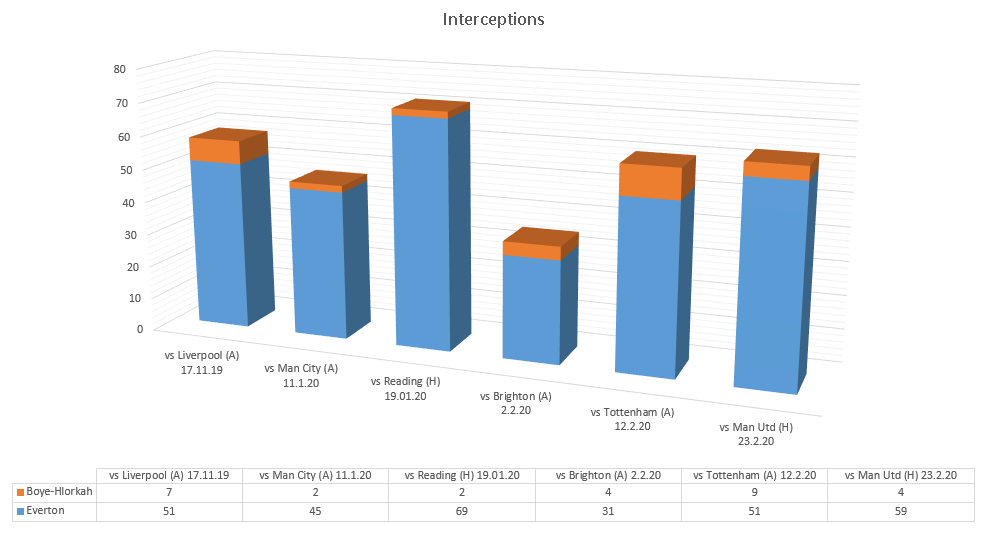 In the next section, let’s examine how her positioning adds to the threat in attacking transitions after winning the ball.

We have already looked at the different positions in which she has been utilised. Most often she plays as the left or right attacking midfielder in a 4-2-3-1 system. This makes her part of a row of three from the top while defending and quickly transition into a wide winger when possession is won.

When out of possession, with Everton sitting in the mid-block, she is positioned compact in the half lane between the opposition centre back and full back. Her positioning in the half spaces while defending, enables the surrounding teammates to get into advantageous positions immediately after winning the ball.

Here we see an instance where Everton are defending in the middle of the pitch against Manchester United. As the pass is made from United’s centreback to the left back, Boye-Hlorkah’s positioned in the right inside channel that enables her to immediately apply pressure. In this case, the left back’s touch was too heavy and Boye-Hlorkah was able to force it out of play. 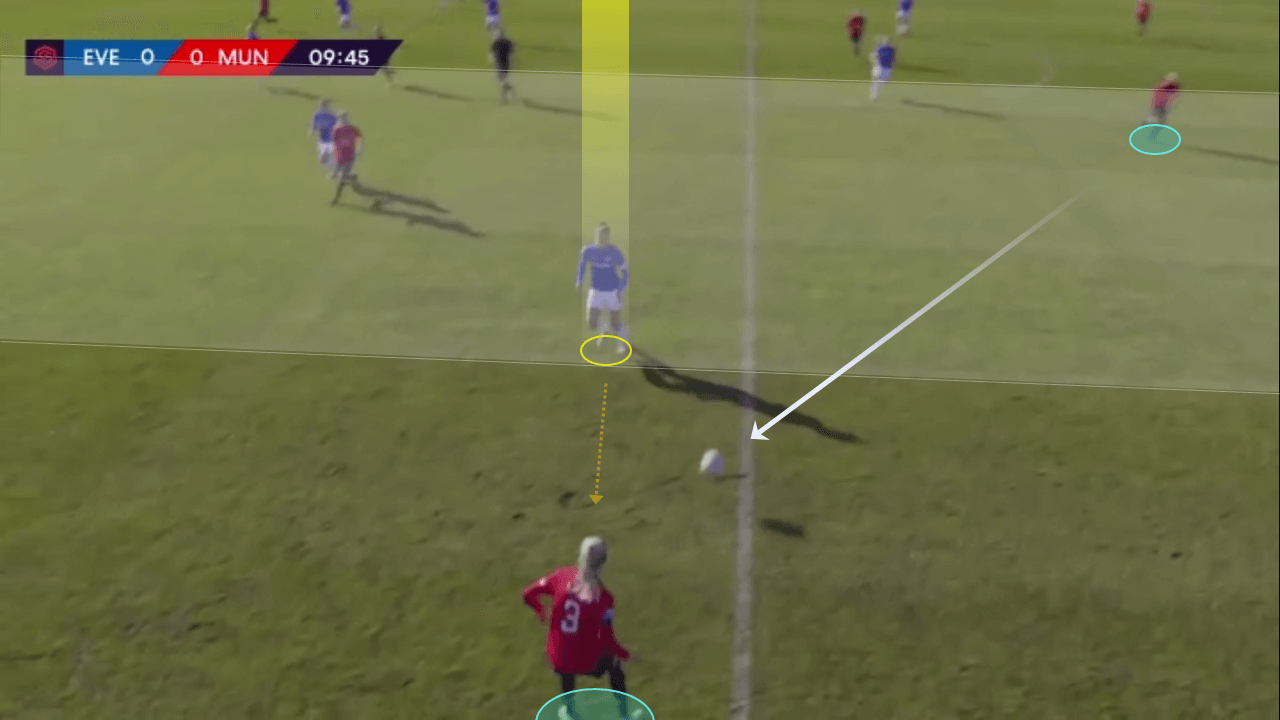 In the same game, we see another instance where the central player under a lot of pressure from Everton’s forwards attempts a similar half-hearted pass. Boye-Hlorkah’s ready and perfectly positioned to intercept the pass and Kelly is able to dart forward at the same time making it a very effective attacking transition for Everton. 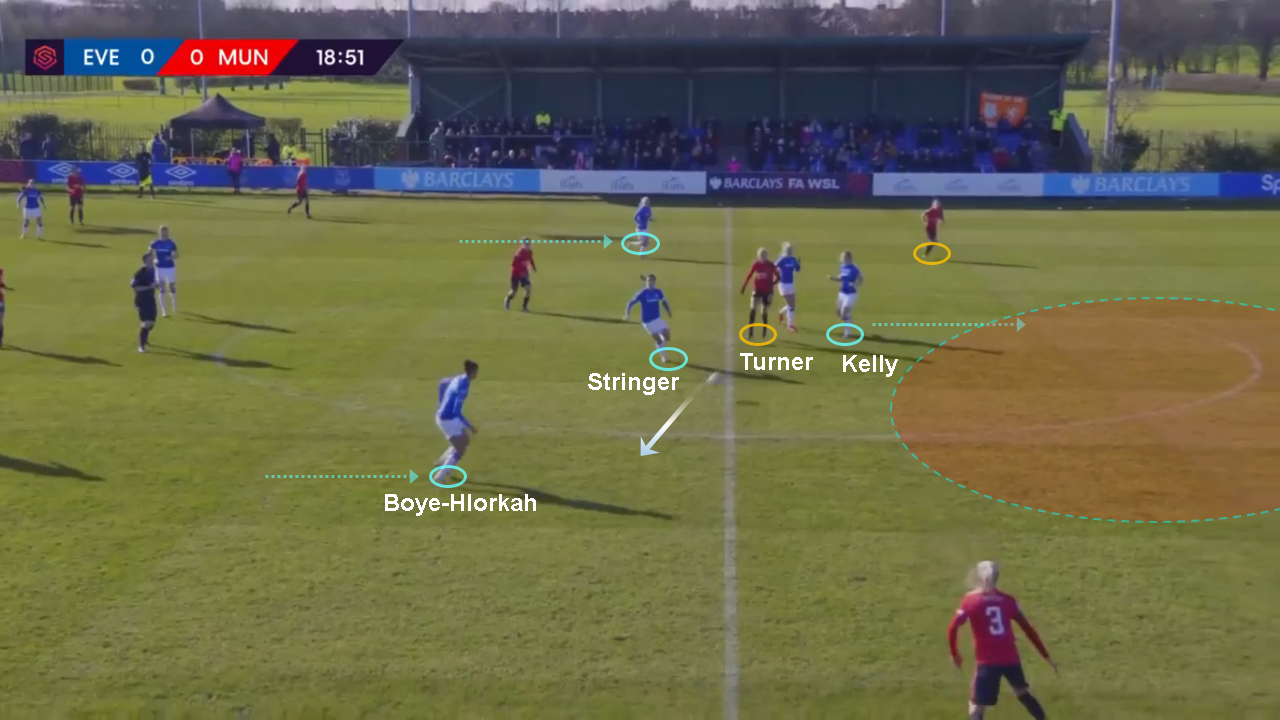 Boye-Hlorkah’s positioning in the inner corridor gives her the flexibility to pick her moment to time the press. She usually presses when the ball shifts to her side of the pitch, and she is sure that she has players behind her wide and in the centre to cover. Let’s look at this example below against Tottenham. We see Boye-Hlorkah waiting in the right half space for the fullback to receive the ball, while her teammates centrally continue to pressure their markers. 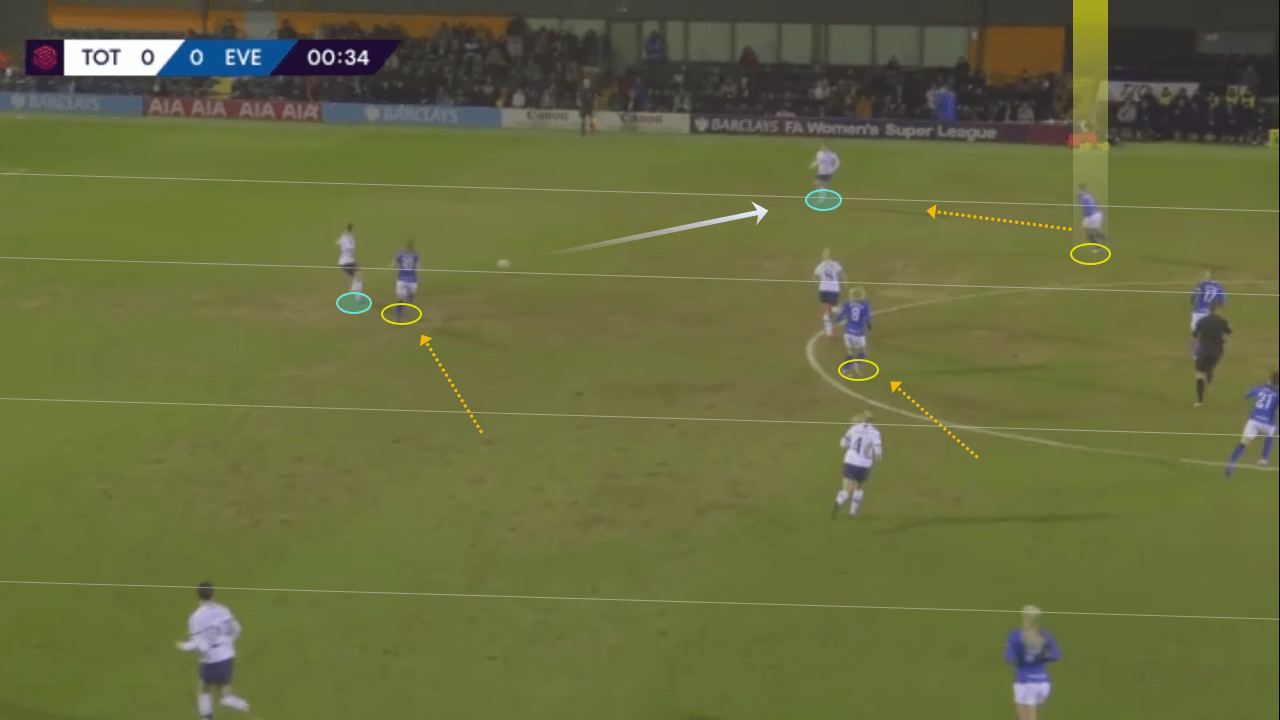 In this case, even if Boye-Hlorkah presses and doesn’t manage to intercept, the cover players behind her go man-to-man and close down the options enabling Everton to immediately win the ball as a team. 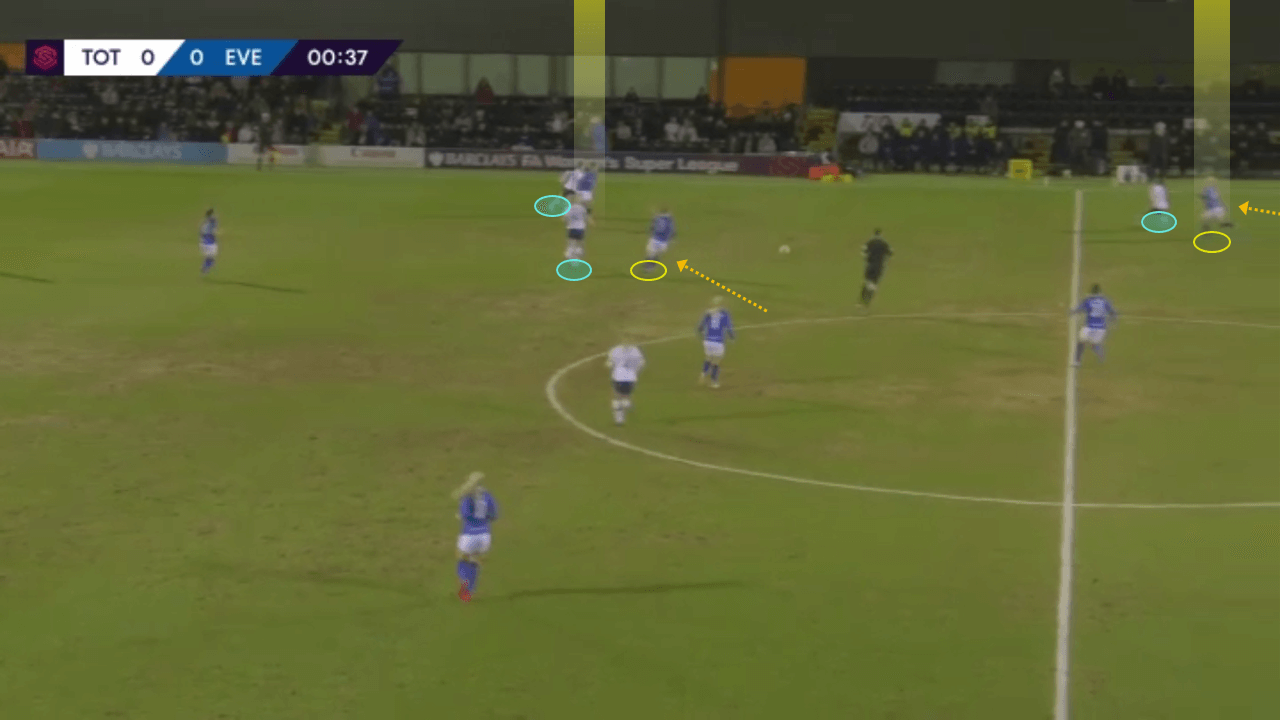 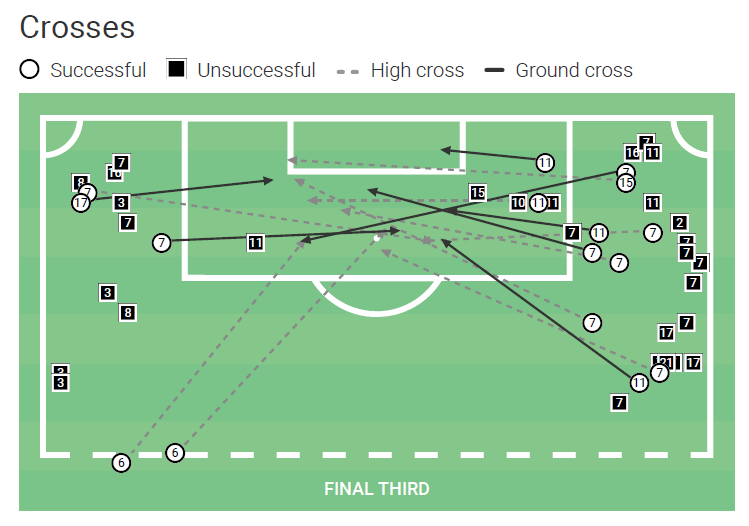 Boye-Hlorkah’s exceptional crossing ability had come more into the spotlight in the later games which added to her high xA value. She has registered 32 crosses in total averaging 4.3 crosses per 90 with 33% accuracy.

In the initial games of the season she played on the left more often, and despite averaging a decent number of crosses from the left, Kirk was able to unleash her ability from the right playing her as a right attacking midfielder. Here we see the cross map against Manchester United where she attempted seven crosses throughout the game from both sides as she started off on the right-wing and then briefly switched to the right in the second half.

This shows that she is adept at delivering crosses from both flanks. Not only are the positions from where she delivers these crosses notable, but also the timing of her crosses are on point putting a lot of pressure on the opposition defence. Here we see an instance against Manchester United, where the player in front of her backheels a pass into Boye-Hlorkah’s path and she is able to whip a high quality cross directly into the box with her right foot. 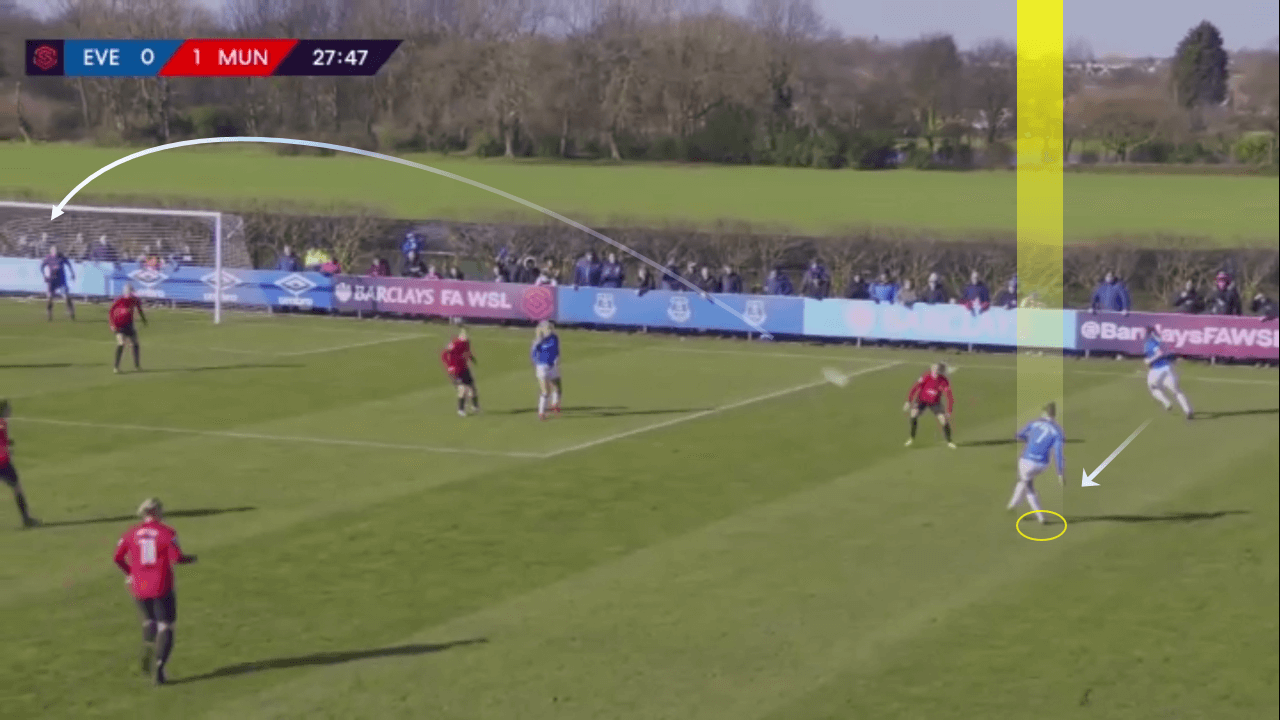 Her technical skill on delivering these crosses is one of a kind. One of the moments that stood out was this case against Tottenham, where she was laid off a pass from the centre to the right, and since she was facing the pass, she nicked it the first time with the outside of her right boot with the perfect weight and power to find Kelly at the far post ahead of the centreback. 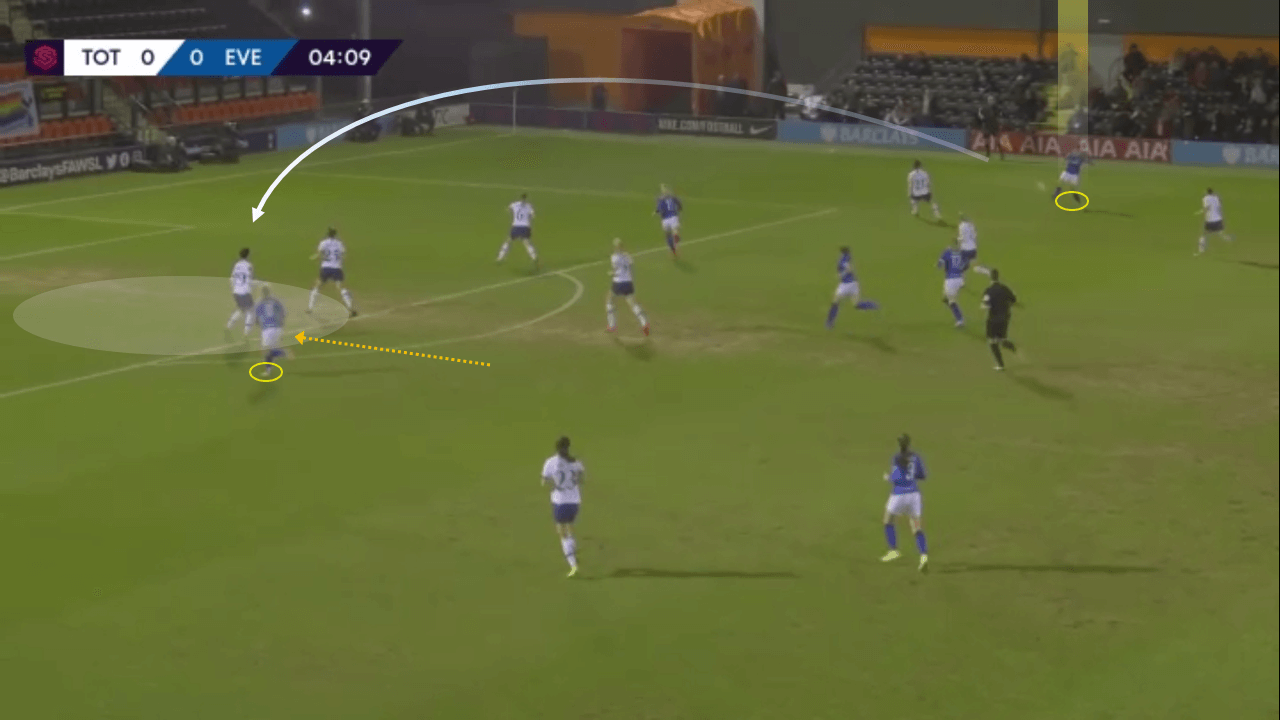 Aside from her technical qualities, Boye-Hlorkah demonstrates excellent forward instincts. Her anticipation and intelligent reading of the game put her one step ahead of her opponents enabling her to win a great deal of loose-ball situations. In fact, she has attempted 17 loose ball duels with 53% of them won.

Because of her central positioning when out of possession there are many encounters where she is required to play the role of a forward when possession is won. Let’s take this example against Tottenham. The centre back is pressed almost to the touchline by the Everton centre forward, Kelly and she attempts a pass across her penalty area. Boye-Hlorkah immediately recognizes the opportunity here that the pass might be a loose one and immediately begins to attack the box for a possible interception or a shot on target. 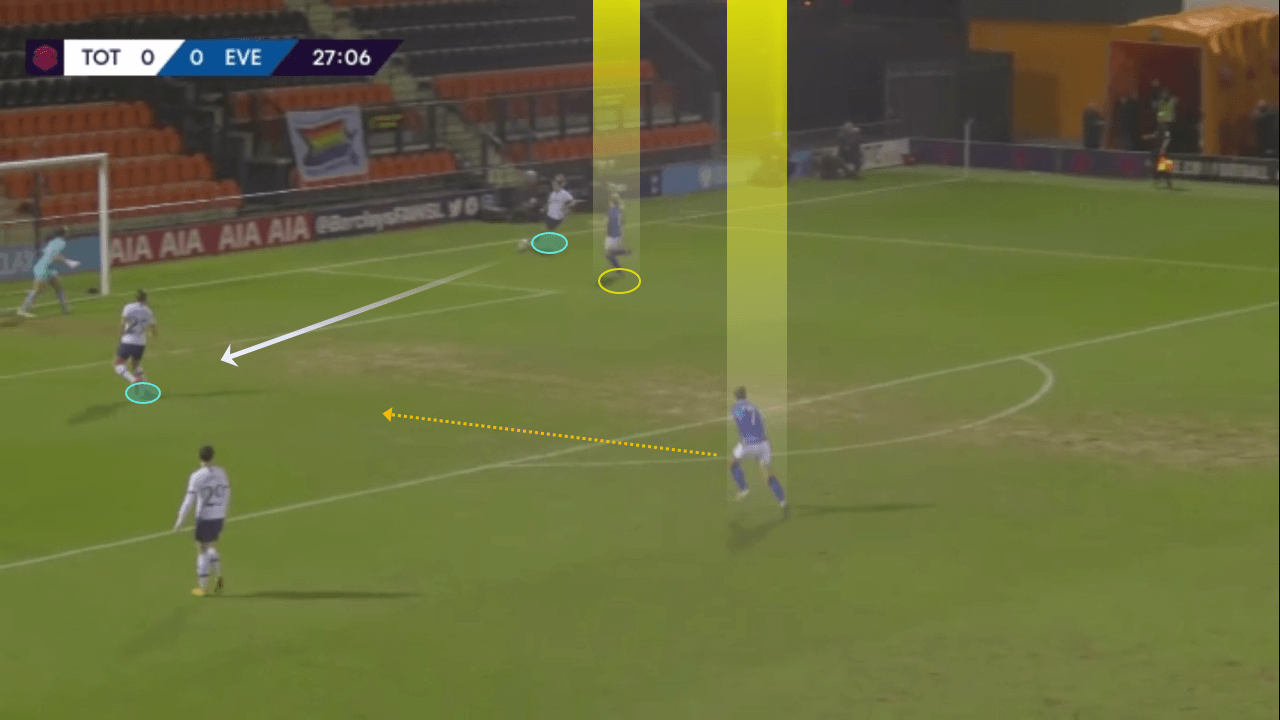 Here we see that the body profile of the other centre half who is receiving the pass, the nature of the pass, which is horizontal and weak, and the proximity to the goal all plays a big factor in Boye-Hlorkah’s decision to immediately press the box. In this instance, she wins the ball but attempts to lay it off to another teammate.

Let’s look at another situation, against Manchester United where Boye-Hlorkah is playing as the right attacking midfielder and her forward, Magill is released with a penetrating pass from deep behind the opposition defenders. Boye-Hlorkah immediately attacks the box, giving a headstart over her marker, for a possibility to tap in a goal from a pass that can be squared by her forward. 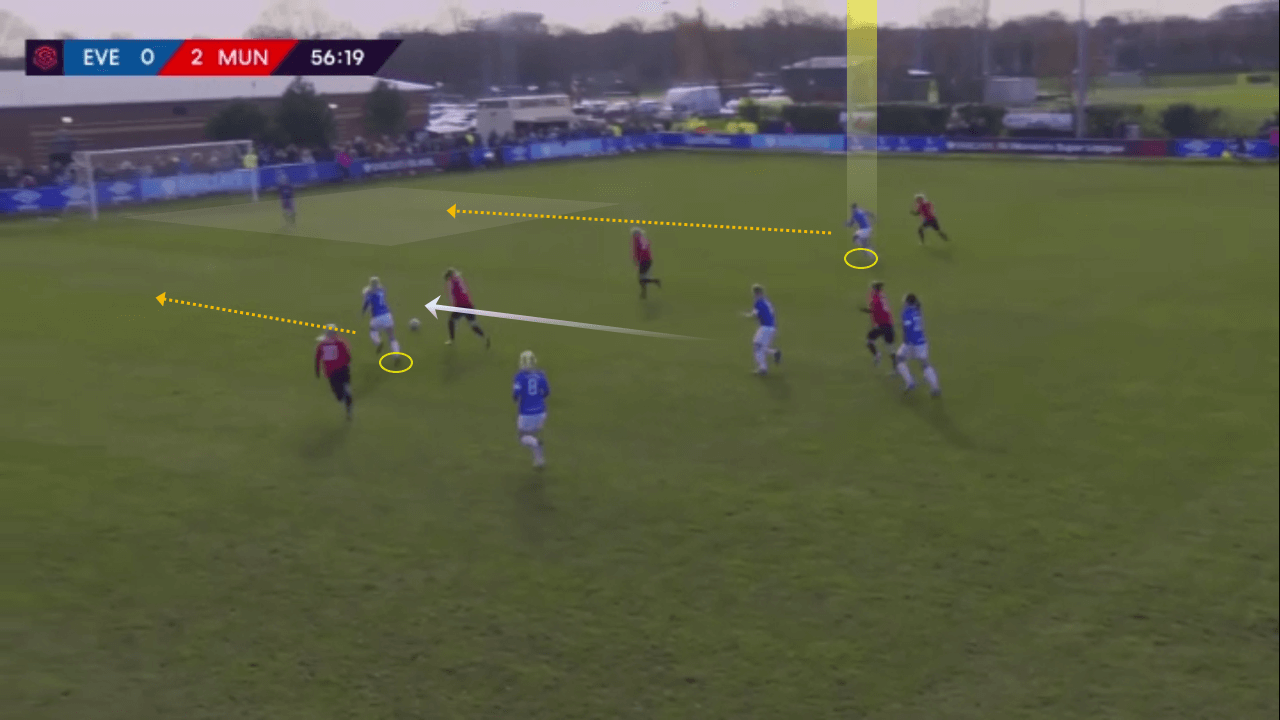 In this instance, the forward did attempt to square the pass but it was intercepted by the defender. Thus we see a typical forward instinct to pick the opportunity to be attracted to the penalty box and pick the right opportunities to pressure the opposition in the final third. This shows why Chantelle Boye-Hlorkah manages to win so many interceptions and recoveries in the opposition half.

Chantelle Boye-Hlorkah has been a utility player for Everton, fulfilling almost any role that she is tasked at and added a lot of value to Willie Kirk’s system. She has progressed significantly throughout this season. What sets her apart is her high work-rate apart from all the attributes that I have briefed in this scout report.

Her role is quite unique in the sense, she is a winger who plays with the mentality of a box-to-box engine. She might not have the goal-scoring abilities of some of the big names in the league but her determination and defensive qualities make her a major cog in the working of this Everton team which is easily one of the best pressing teams in the FAWSL.