Woo Yeong-Jeong is a 22-year-old South Korean international currently playing for SC Freiburg in the German Bundesliga. He is predominantly a winger, but has also featured as a 10 or as a centre-forward for Freiburg this season. He generally prefers to play as a right-winger, but can play on the left, and whilst he is officially right-footed, he is comfortable with both.

Yeong-Jeong came through the Incheon youth academy before signing with Bayern Munich in 2018. Starting out with the U19 side, it wasn’t long before he broke into the Bayern Munich II team, however, he was unable to make the step up into the first-team. After joining Freiburg in the summer of 2019 he initially had limited action in the first-team, and even spent more time with Bayern Munich II on loan. Last season he began to feature more frequently, but was still a bit-part player. However, this season Yeong-Jeong has been given a more prominent role and has flourished in a Freiburg side that have exceeded all expectations thus far, and sit only behind Bayern and Borussia Dortmund in the table at this stage.

This tactical analysis and scout report gives an analysis of Yeong-Jeong’s strengths and his role in Freiburg’s tactics.

Regardless of what position he plays, Yeong-Jeong is talented at timing runs into space to either get into an attacking position where he can shoot from, or to find space to create for others.

He stands at just 1.79m in height, but has a knack for finding space in the area and latching onto crosses with accurate headers.

Yeong-Jeong will wait patiently on the edge of the box and wait for an attacker ahead of him to make an early run. Yeong-Jeong sees his teammate dragging his marker with him and he will instinctively make a run in this position. We can see this in the following two images which come against Stuttgart earlier this season. In this example, where he scored his first of two in that game, Yeong-Jeong is arriving on the edge of the box just as his teammate out wide is making the cross. 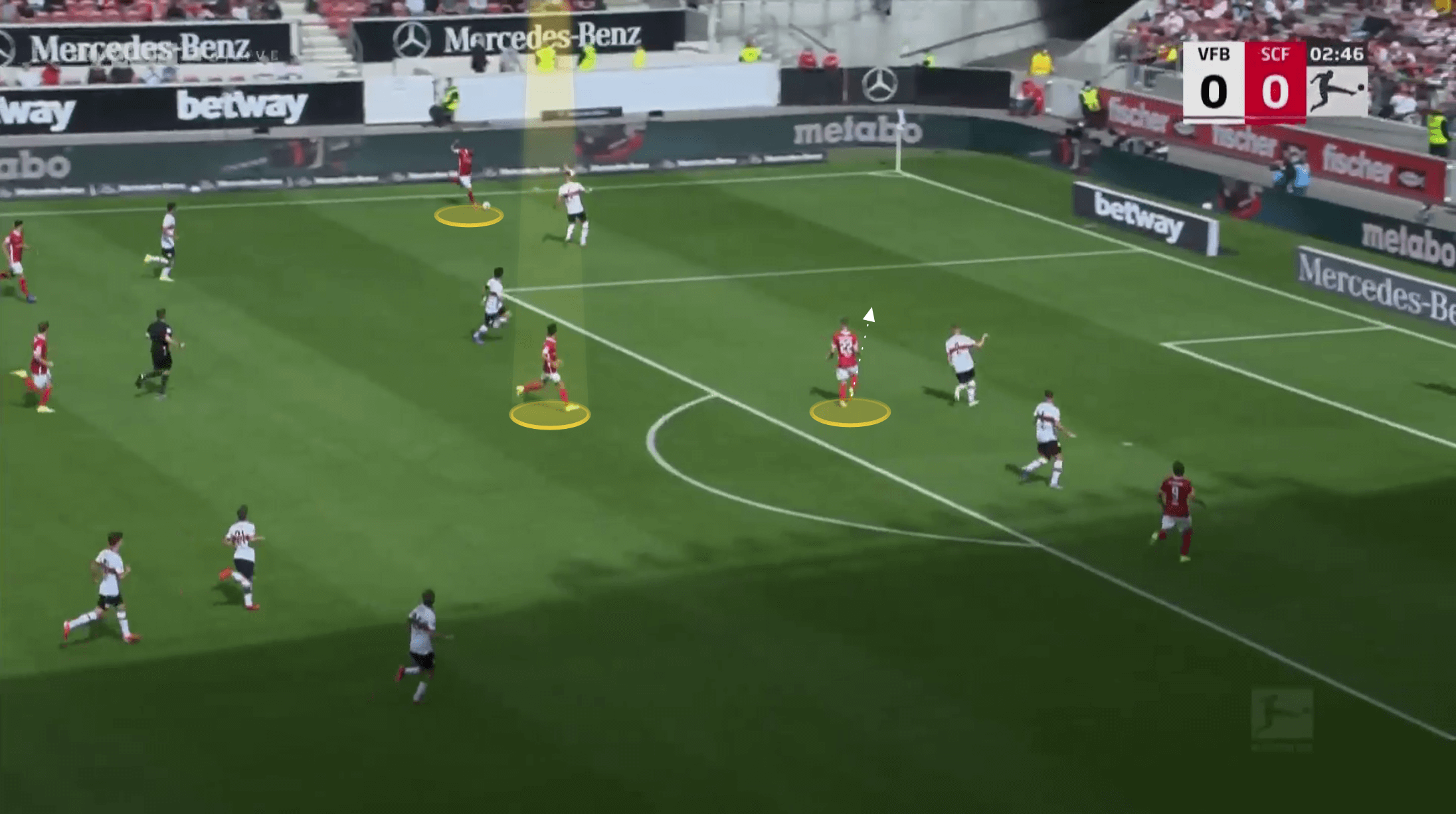 He times his run perfectly, accessing the space left behind by his teammate to meet the cross. Not only is the run excellent, but to be able to finish from this distance with his head shows a high level of quality. 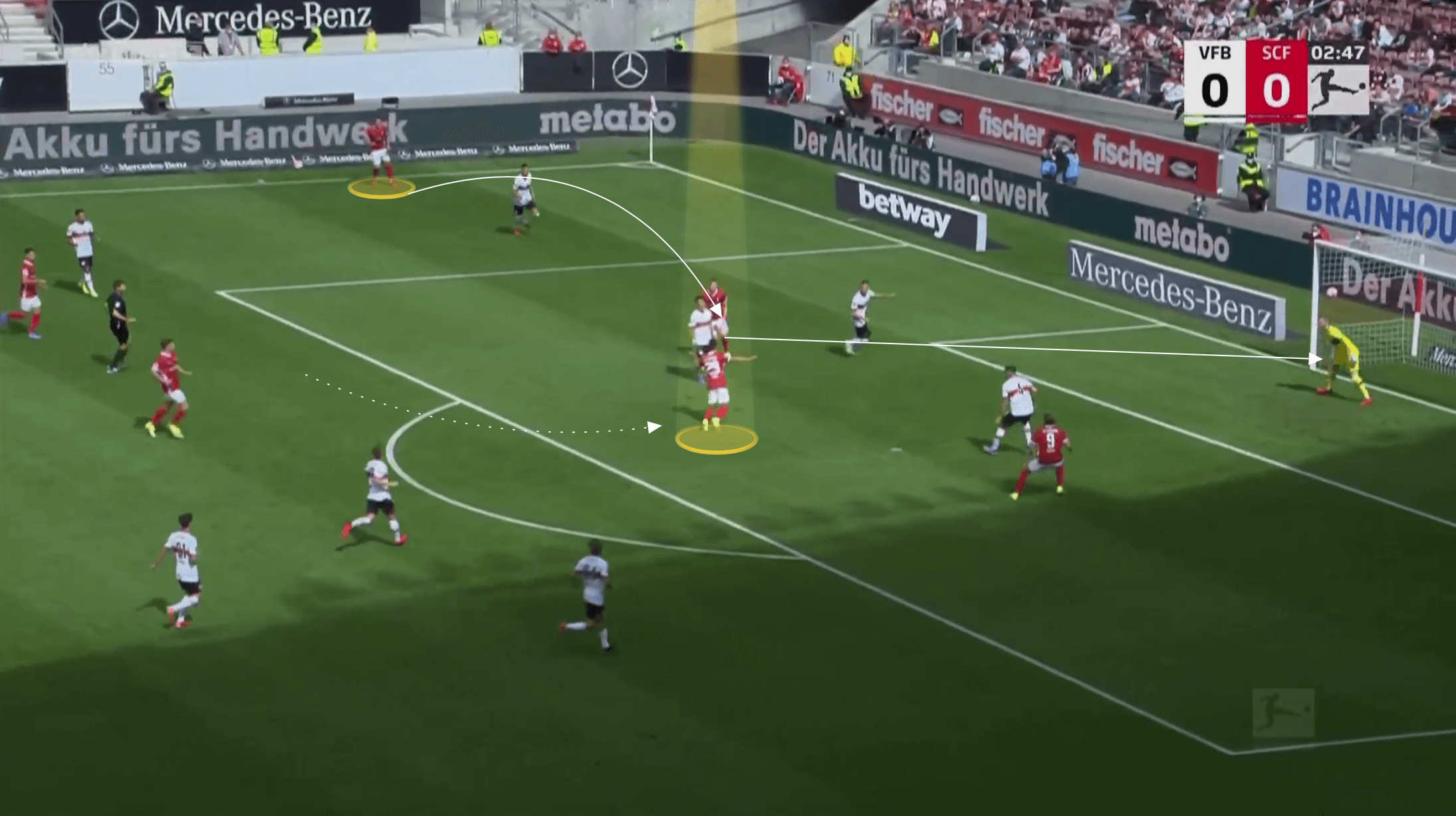 There are times where he doesn’t even need to make the run. Whilst he isn’t small, he certainly isn’t a target man, and perhaps teams underestimate his aerial threat. Again, he scored against RB Leipzig from a header too. We can see how much space he has in the box, operating between the wing-back and centre-back. 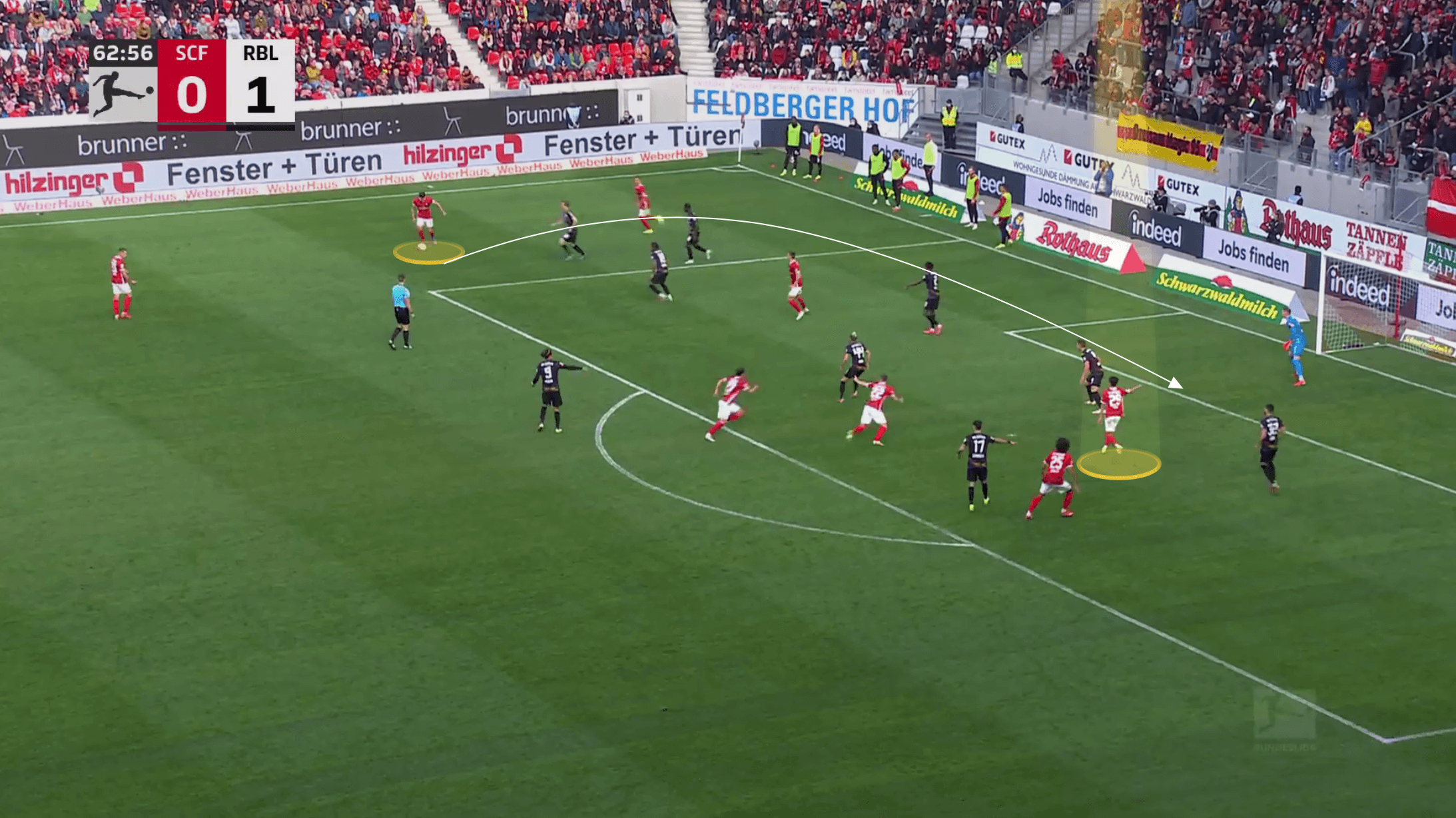 If operating centrally, Yeong-Jeong will look to access space in slightly wider areas, using his central starting position to move unmarked into positions the centre-backs don’t particularly want to go. If he is followed then a teammate is likely to hit the gap between the two opposition centre-backs, or if he isn’t followed then he will take on a shot from a slightly wider area. We can see him recognising the space in the opposition defence in the image below. 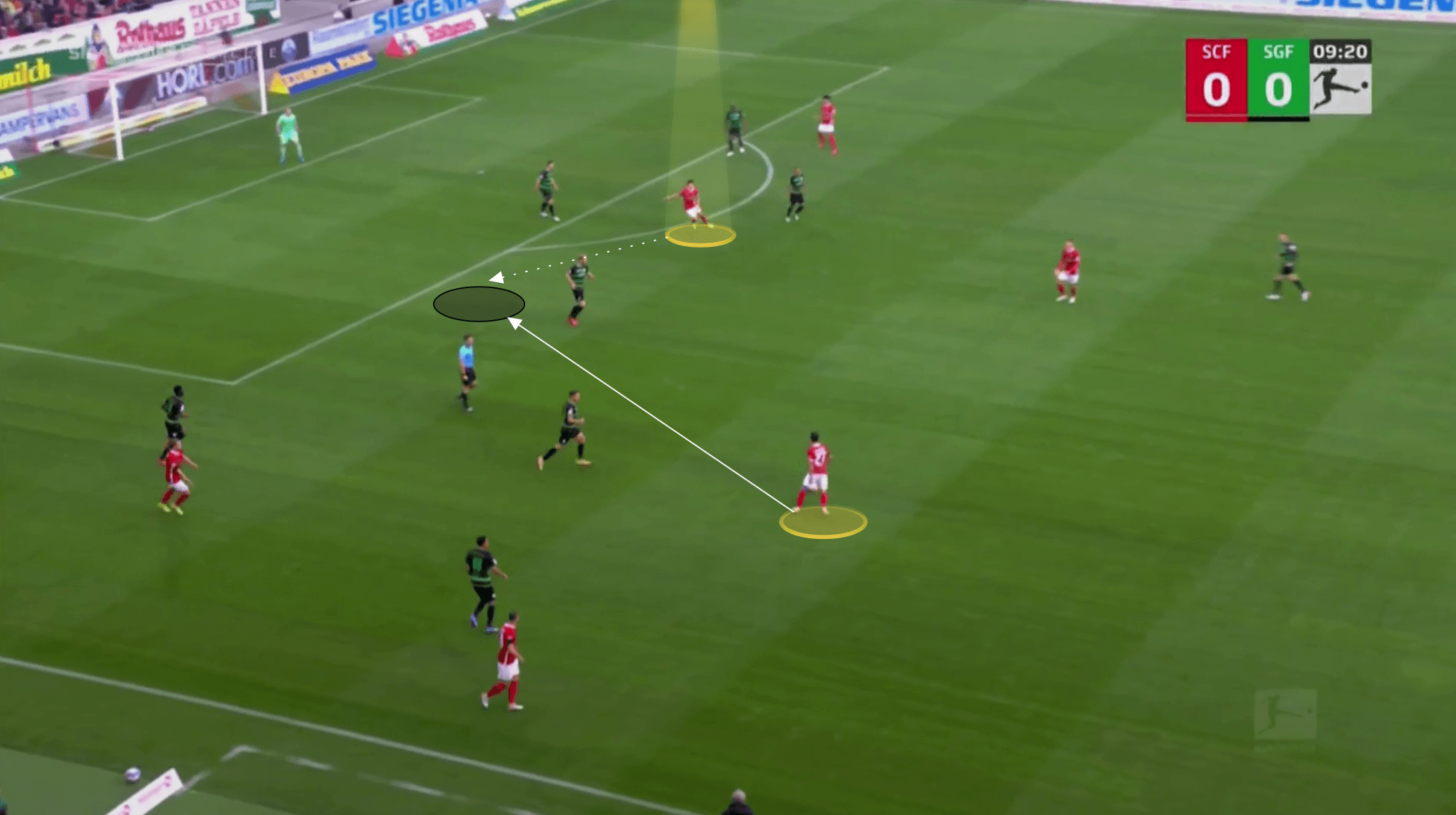 He then shows innovation and superb control to fake receiving with his back to goal, but instead flick the ball with his left leg past the defender, before taking on the shot from the wide angle. 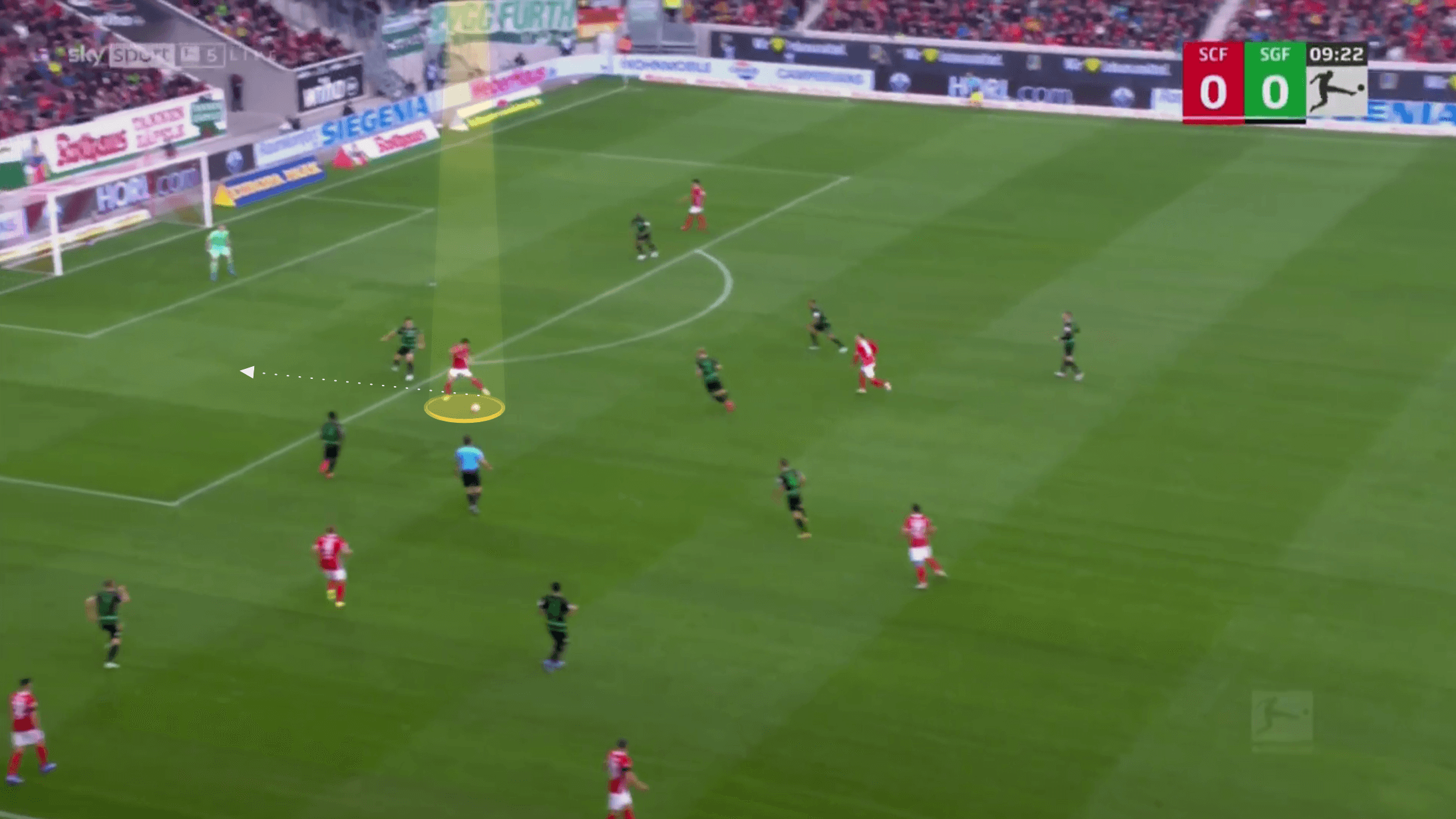 Again we can see another example of a run starting from a central position in the next image. However, this time, Yeong-Jeong looks to receive the ball in the space behind the defence. He is found with a lofted pass, and times his run perfectly, avoiding straying into an offside position, whilst still getting onto the end of the pass and finding space in doing so. 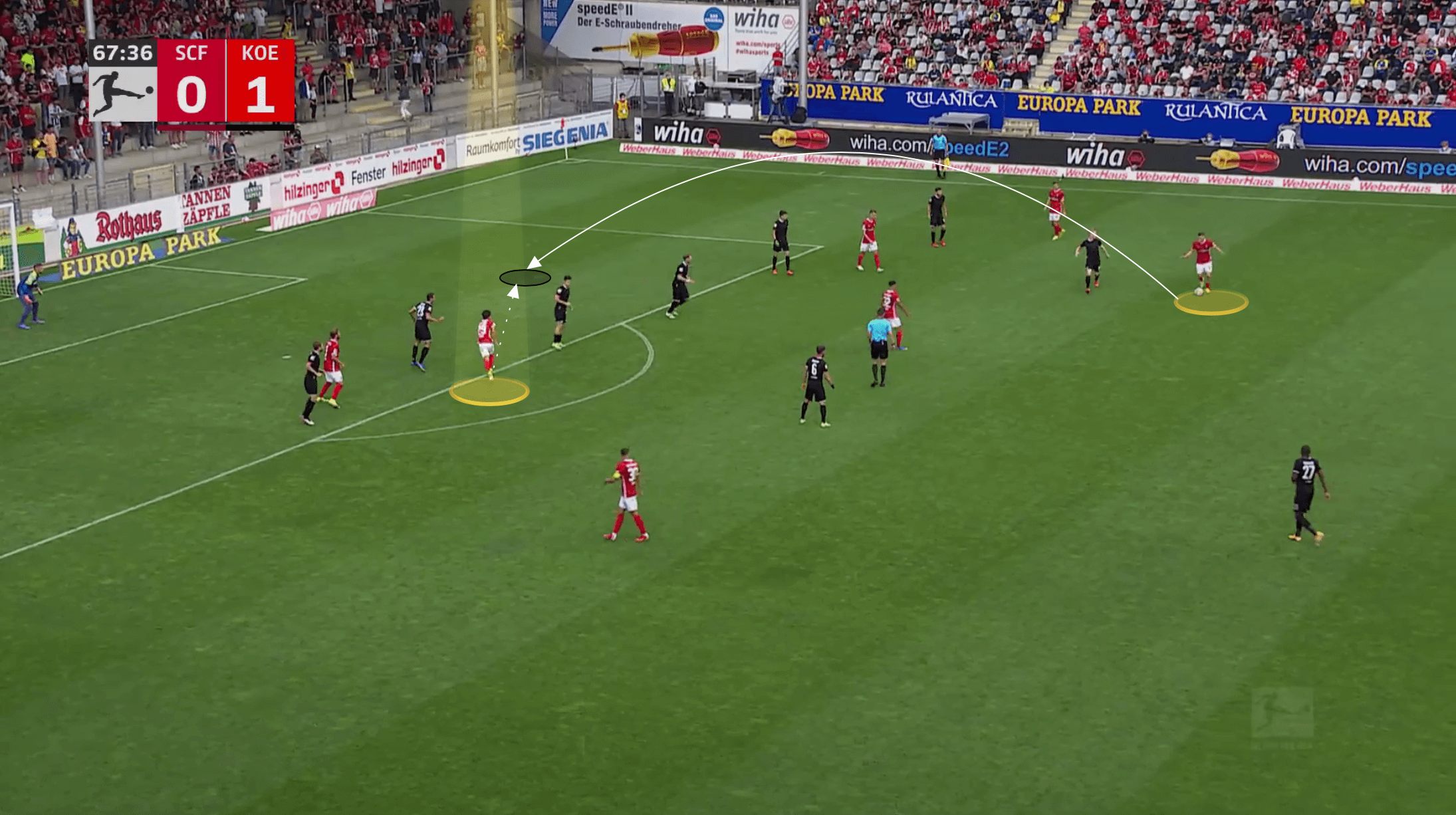 He can still make runs into dangerous central positions when playing wider too. Yeong-Jeong isn’t a passive player. He likes to get on the ball frequently, and is a talented ball-player who plays with awareness and can combine with teammates in tight spaces off of limited touches.

Below is such an example where he flicks the ball around the corner to his centre-forward, before spinning off. 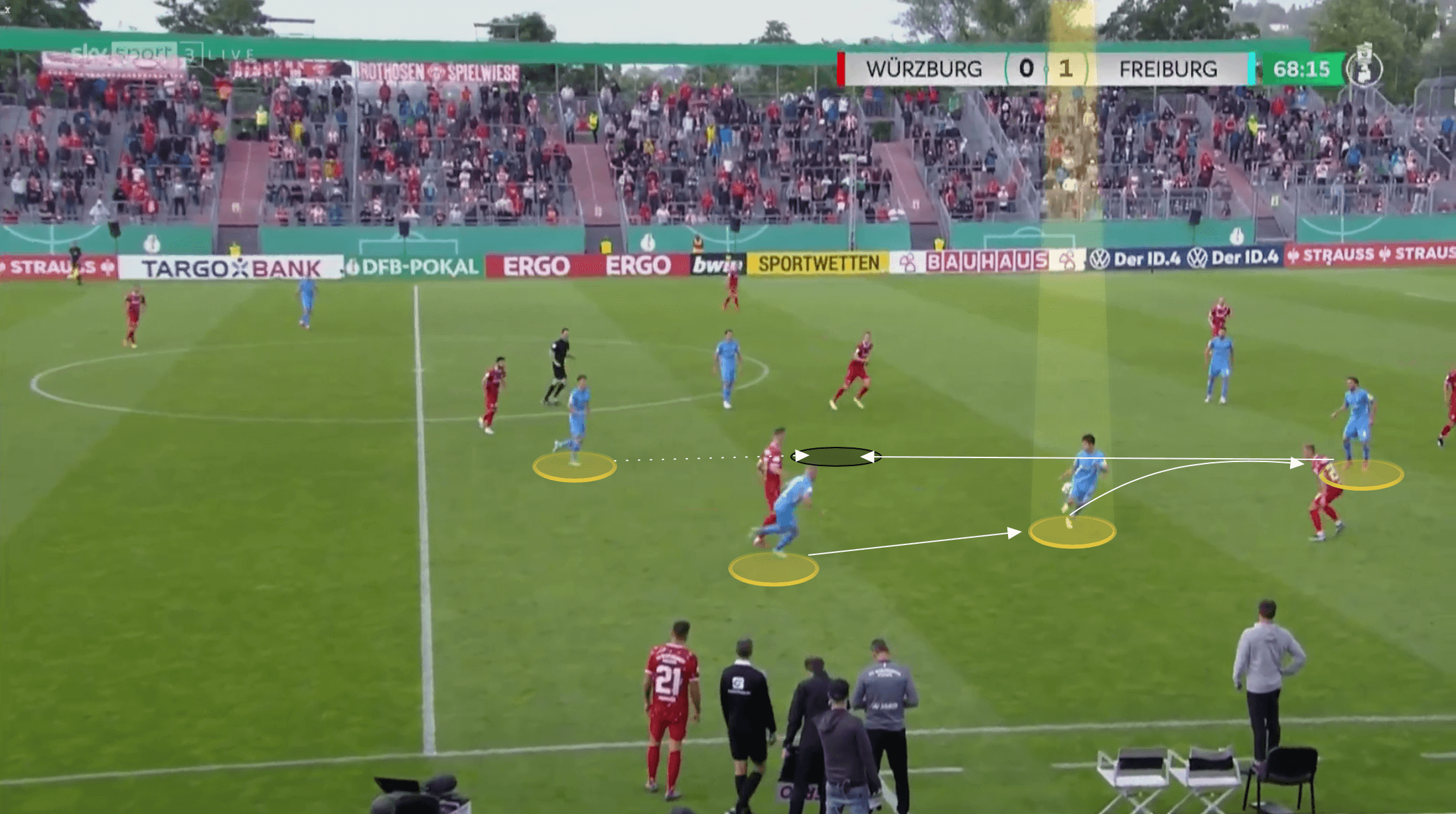 The ball is set back whilst Yeong-Jeong continues his run, and he is able to receive the ball behind the defence as he does so. 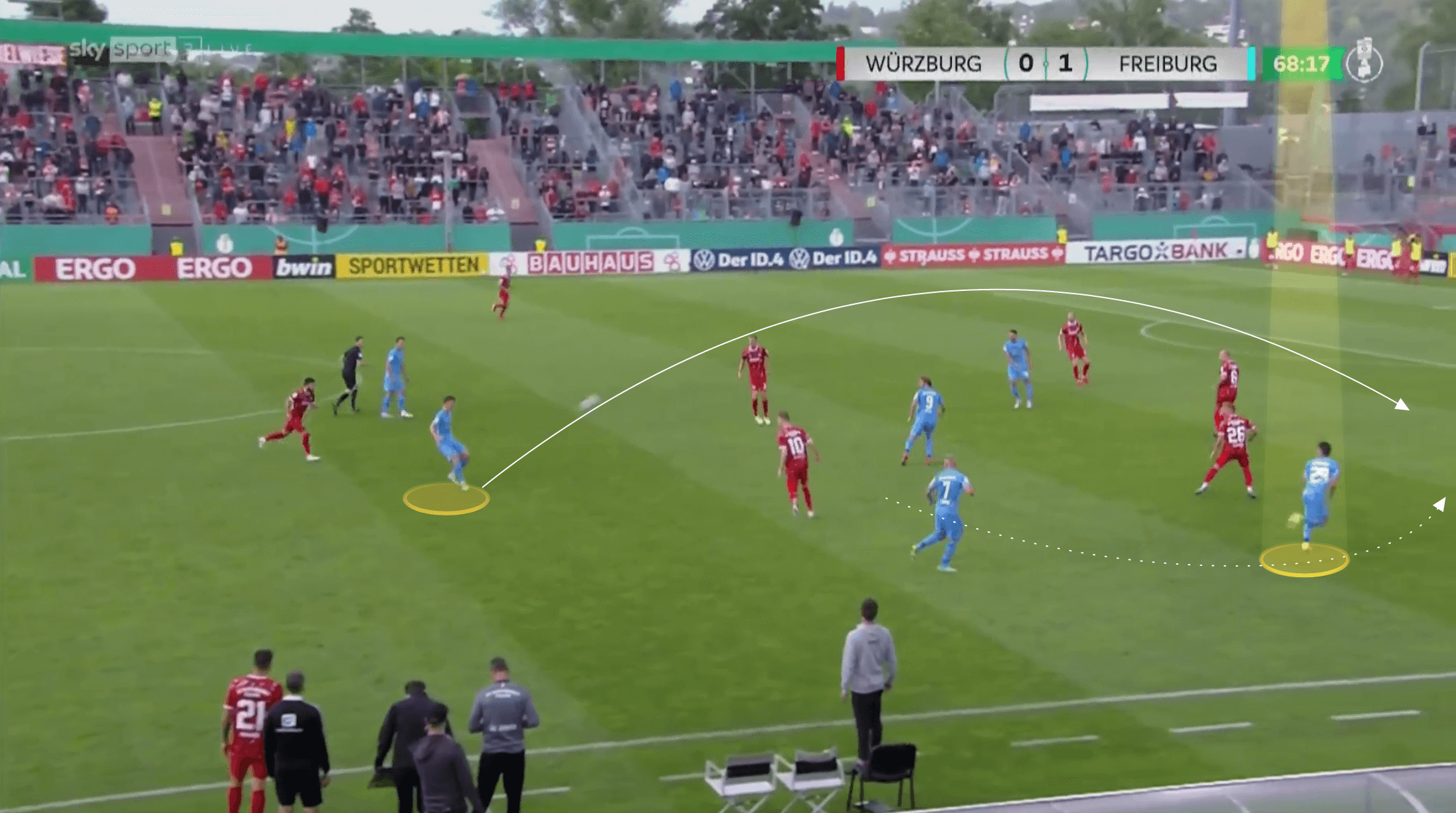 He can get into central attacking positions when involved in more developed attacks too. Once more we can see him combining in a tight area, before moving immediately off into the space ahead of him. 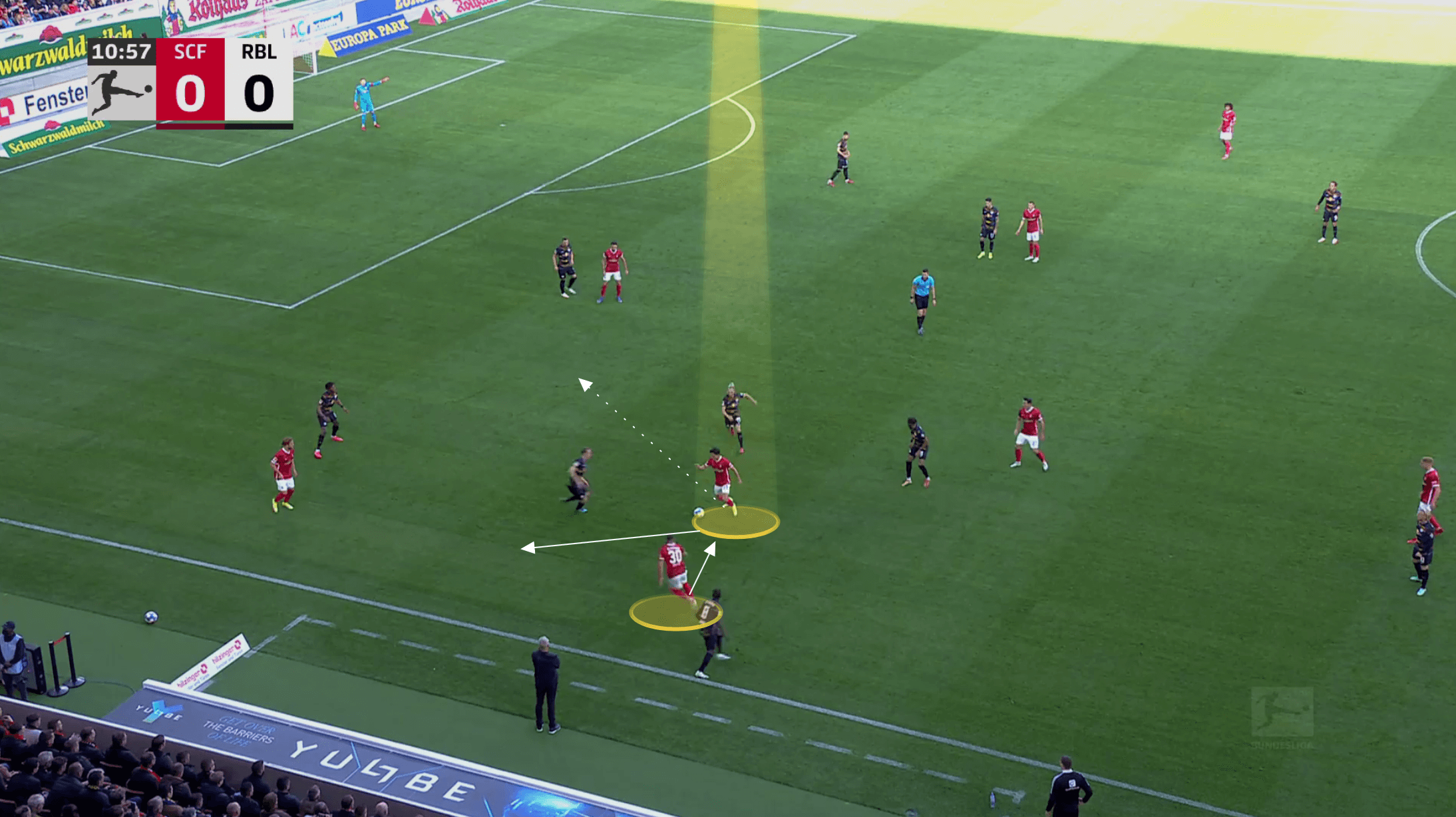 As play develops down the left-flank, Yeong-Jeong continues his run from deep, ghosting into the 18 yard-box before being found with the pulled back cross. 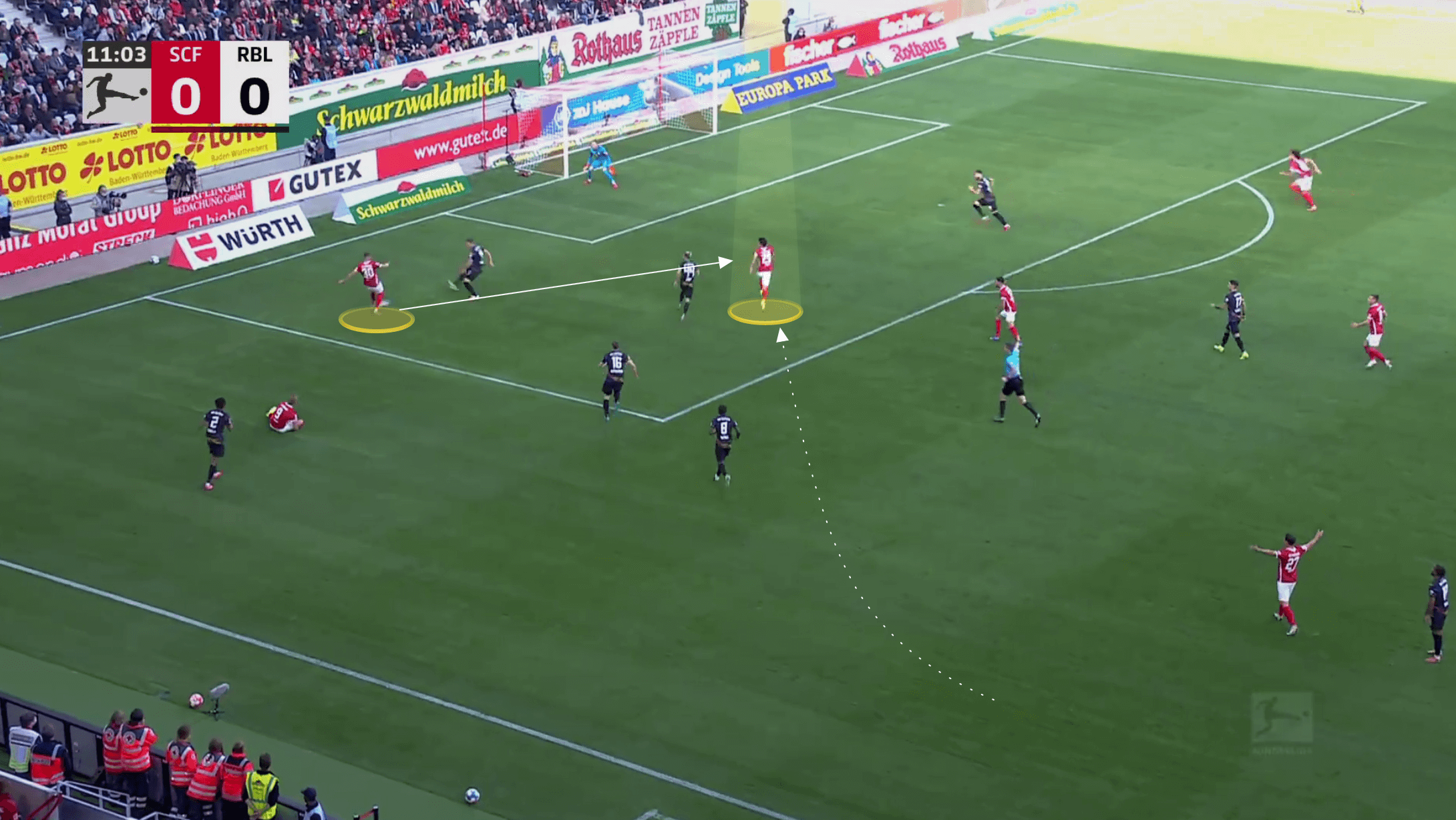 Yeong-Jeong’s heat map from this season is very interesting. He has played 187 minutes as a 10, 249 minutes as a winger, and 333 minutes as a centre-forward. Yet there is a lack of significant action in central positions. When playing as a centre-forward, Yeong-Jeong will still drift into the half-spaces in build-up play, dropping off of the front line. When as a winger, he will drift inside too. Therefore, it makes sense to see large portions of action in the half-spaces on either side of the pitch. 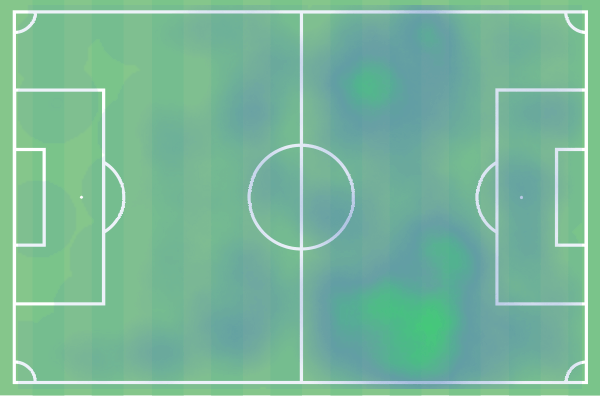 He enjoys receiving in these areas and linking up with players around him. This can result in him making a through pass, dribbling to create a shooting opportunity for himself, or linking up with a teammate who can play him in behind in turn.

We can see such an example in the image below where after receiving in the half-space, Yeong-Jeong combines with an attacking teammate before being played into the space in the area. 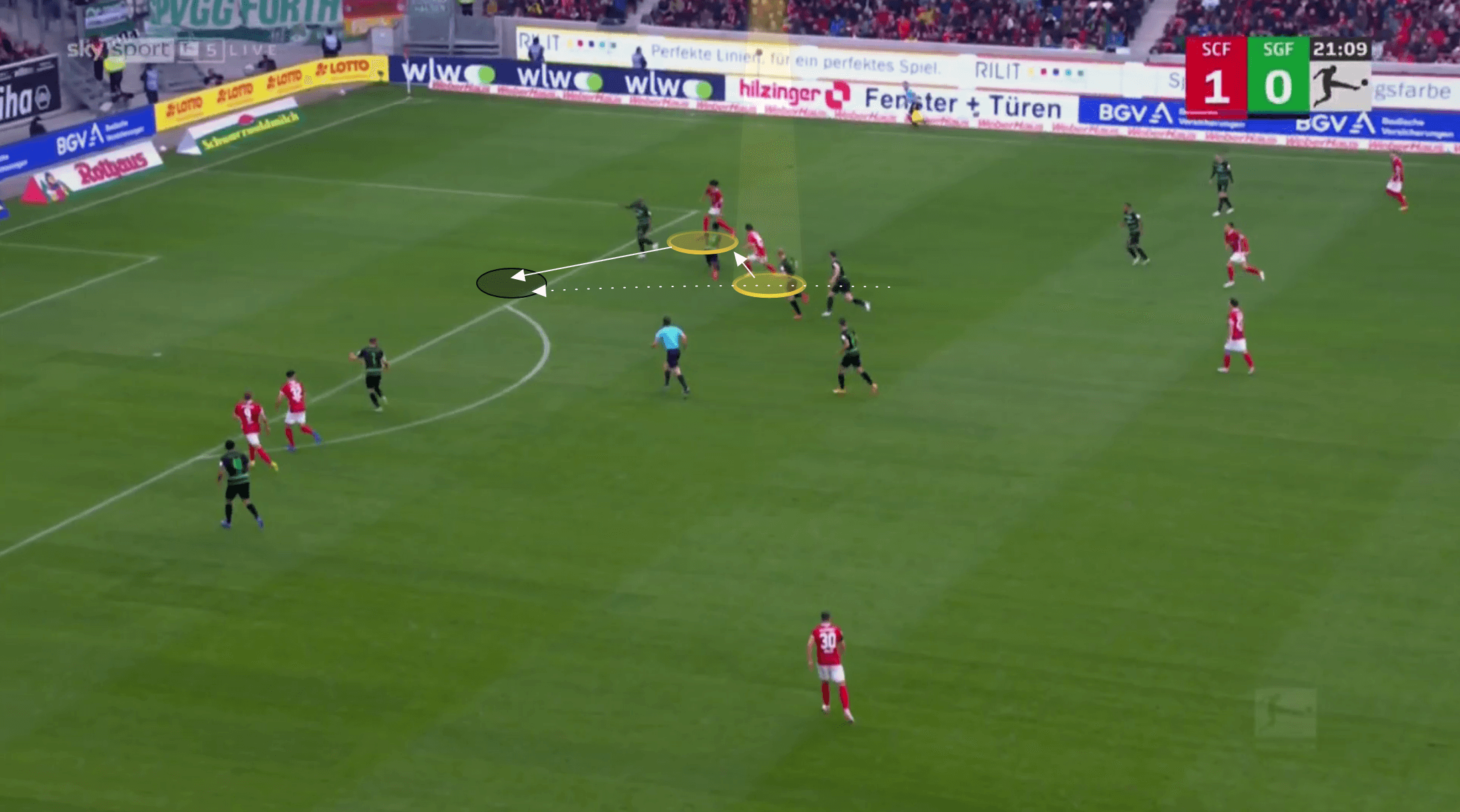 A glance at his heat-map from this season also shows a large number of shots coming from these areas. What is perhaps more interesting though is that Yeong-Jeong is clearly more accurate when shooting from central positions, and perhaps this is an area of his game that needs developing: either to take more shots from central areas, or to improve his accuracy when shooting from an angle. 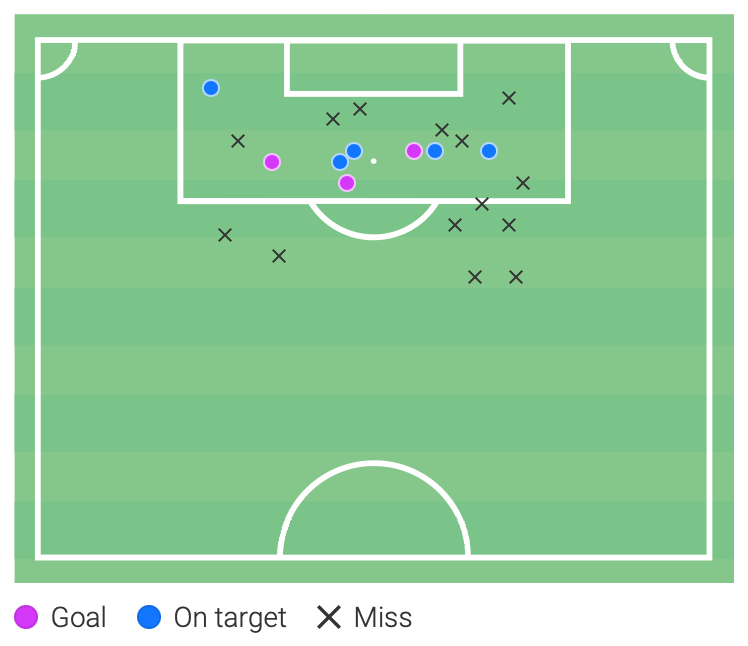 Yeong-Jeong can create for others too. His 1.41 cross per 90 is low in volume, however, he has a 41.75 completion on these which is impressive. His 0.59 shot assists could be higher though, and an increase in volume of crosses and even passes into the penalty area is likely to ensure he begins to add assists to his game.

But as the percentage suggests, Yeong-Jeong is accurate when delivering from wide areas. He has excellent technique and vision and if given the space can whip the ball into a dangerous area. 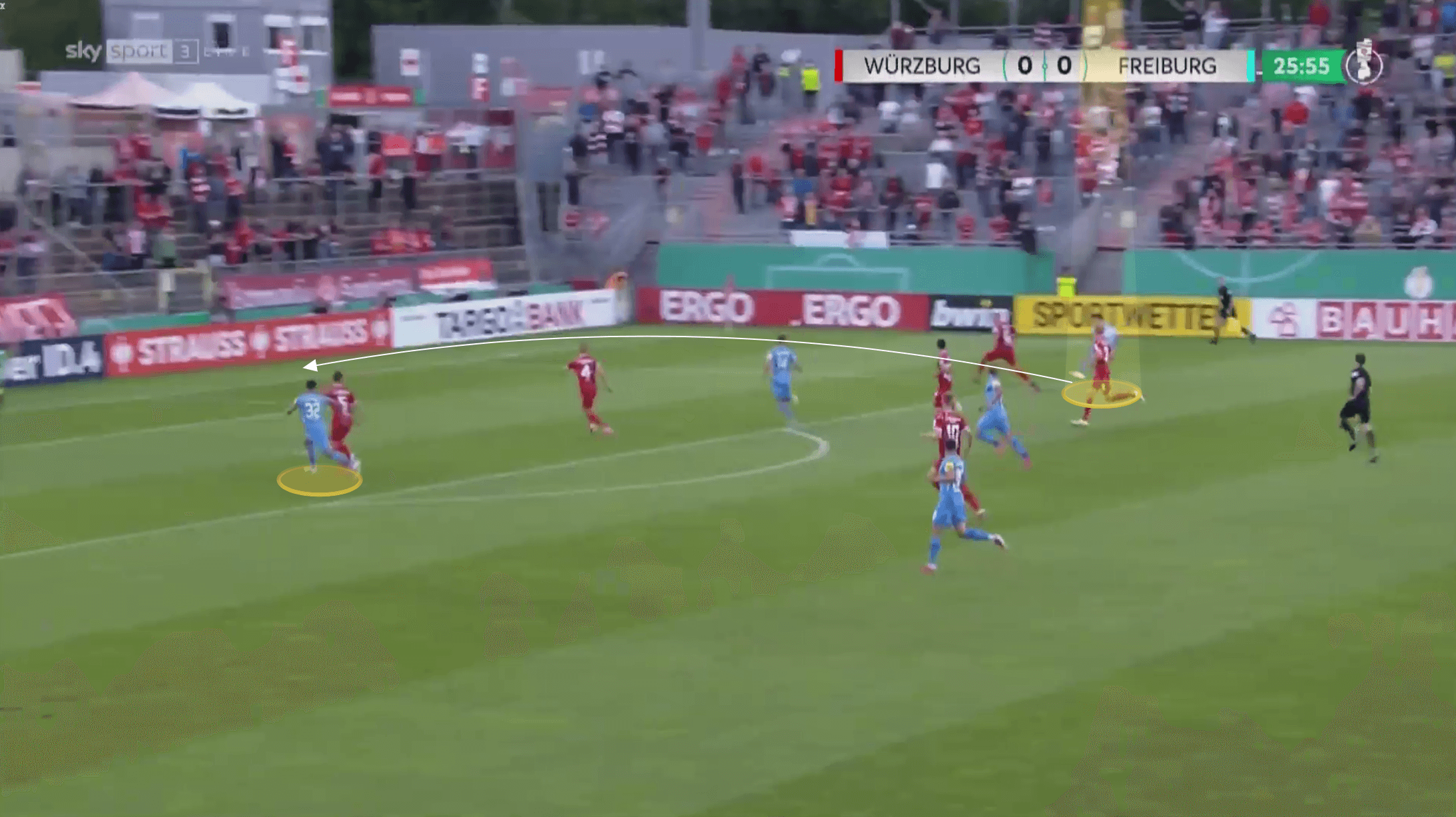 Equally he can get himself into positions to fire pulled back crosses into the area too. We can see such an example against Beyern from earlier this season, where a quick combination from his half-space starting position allows him to get played in behind before whipping the ball back across goal into his centre-forward with pace and accuracy. 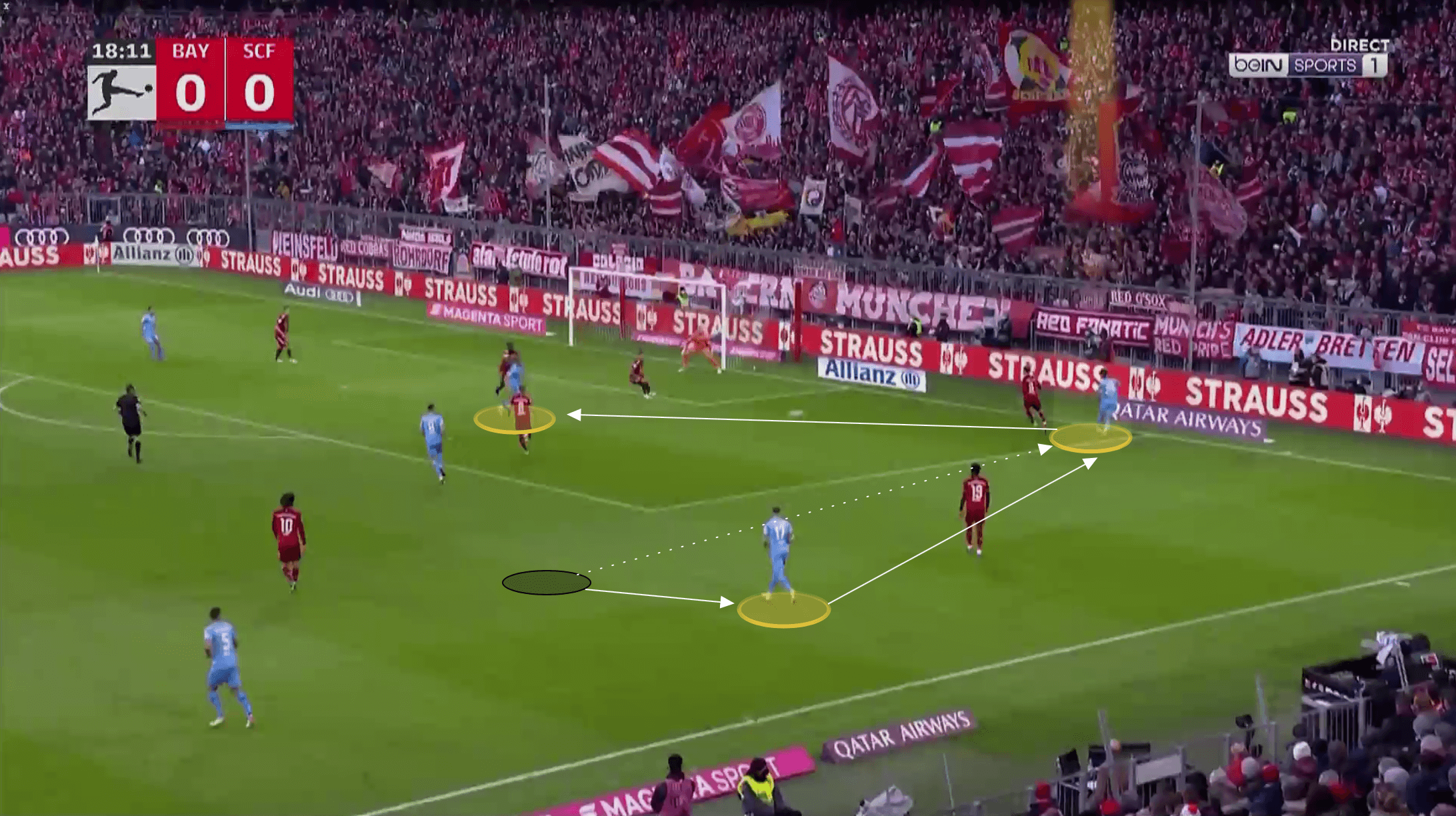 Yeong-Jeong has pace, stamina and above all a desire to get forward and contribute to quick breaks. He drops back well inside his half and is a committed defender. He shows a knack for being able to cut out passes or nick the ball away from an attacker in order to start a counter.

He can drive forward if there is space to do so, but generally he is sensible in attacking transition and will look for the nearby pass option before pushing forward to provide an attacking option.

The image below shows him dispossessing a Leipzig attacker and laying the ball of to his teammate before immediately looking to stretch the attack. 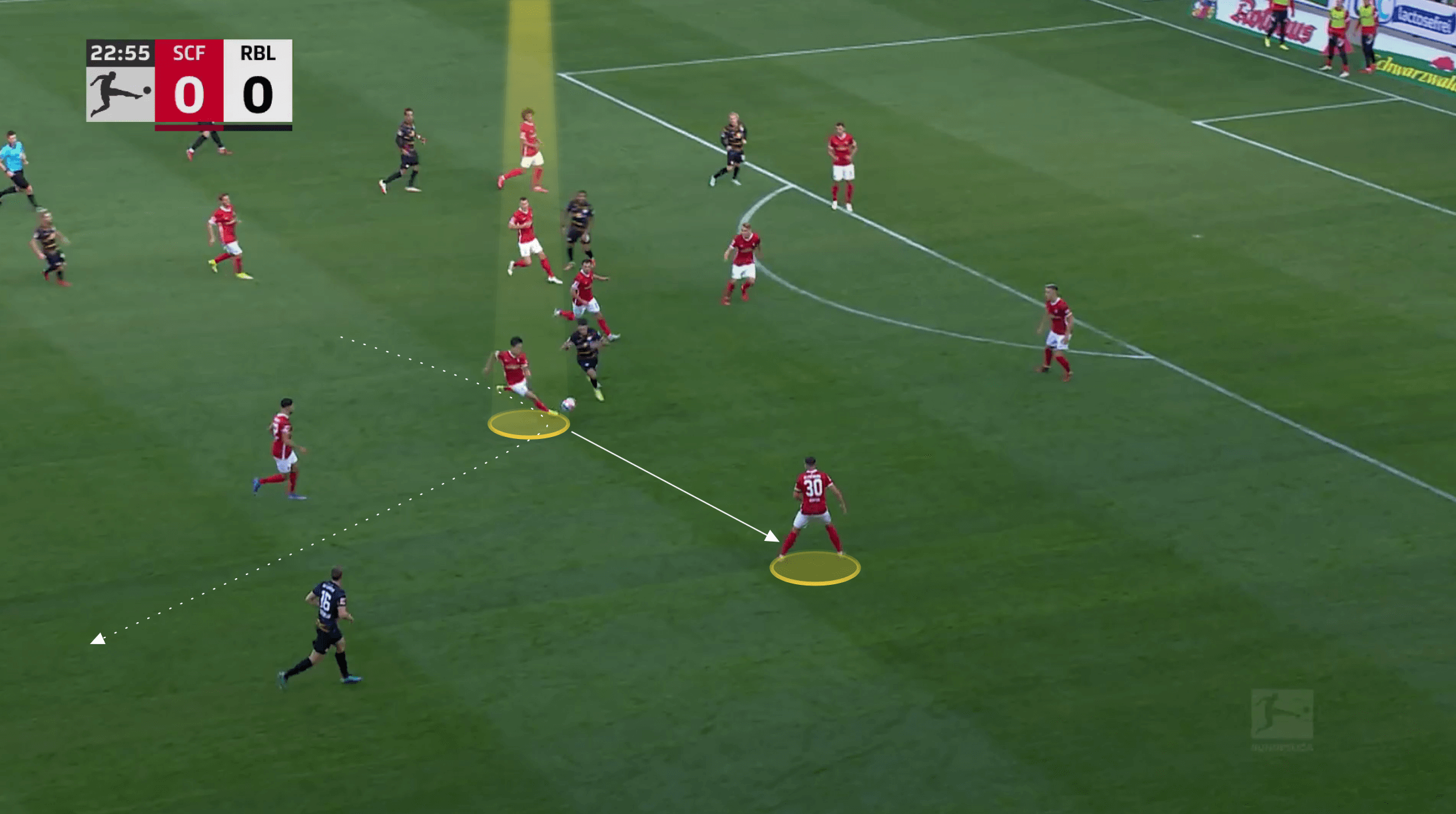 He frequently sees spaces opening in the opposition back line, and once more his timing of runs comes into play. He avoids hitting the space too early and allowing the defence to see the run early or step across to mark him. His impressive acceleration allows him to move late on and burst through into the gap just as his teammate gets his head up to look for a forward pass option.

The image below shows him bursting forward from the midfield in between two Stuttgart defenders to latch onto a through pass. 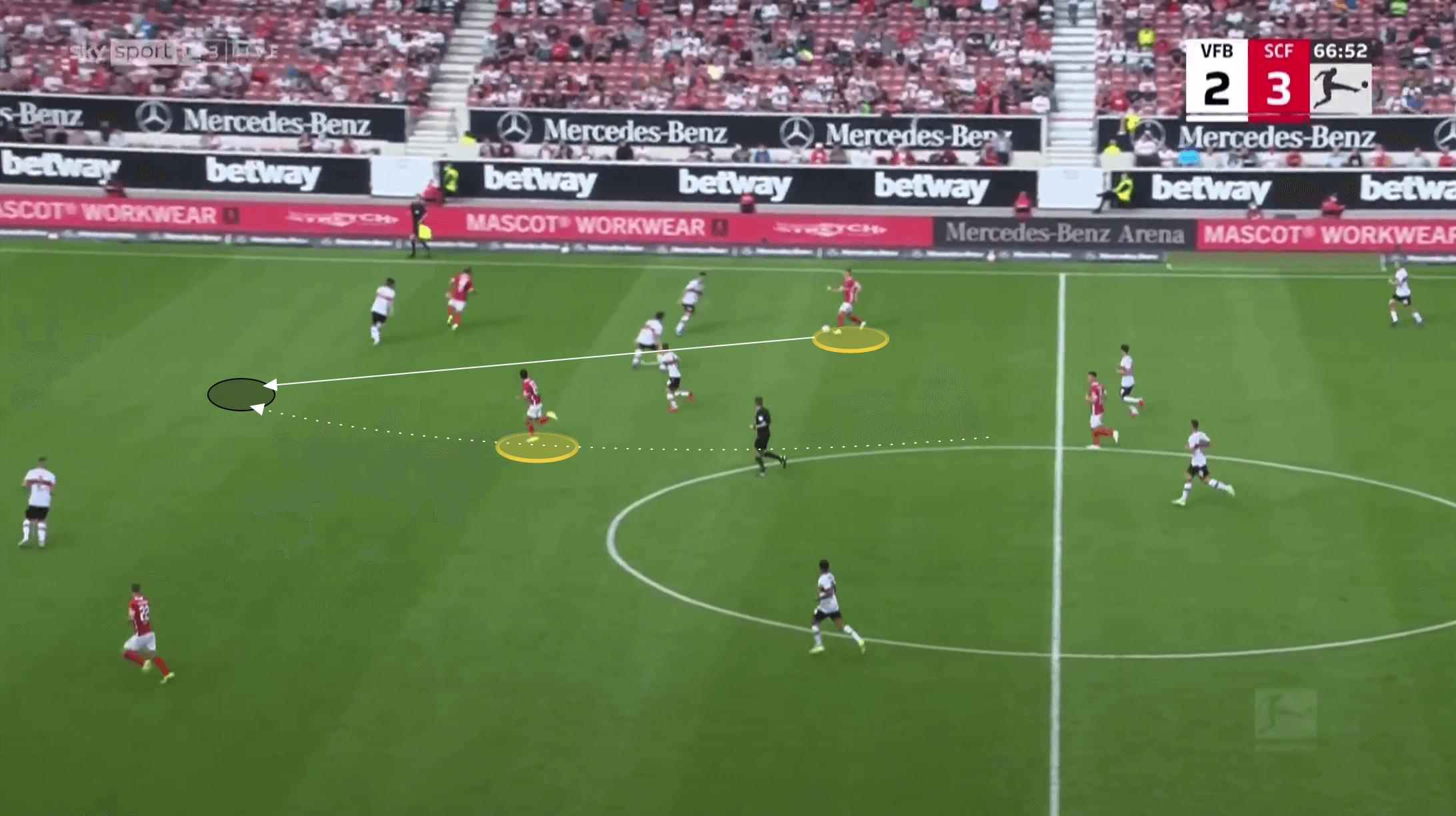 His anticipation of pressing triggers like the loose pass in the image below, allows him to win the ball further up the pitch too. He regularly displays impressive game-reading when working in the first or second line of the press and when winning the ball in such an area he shows a directness, but also an intelligence to open up space for teammates to attack in support. 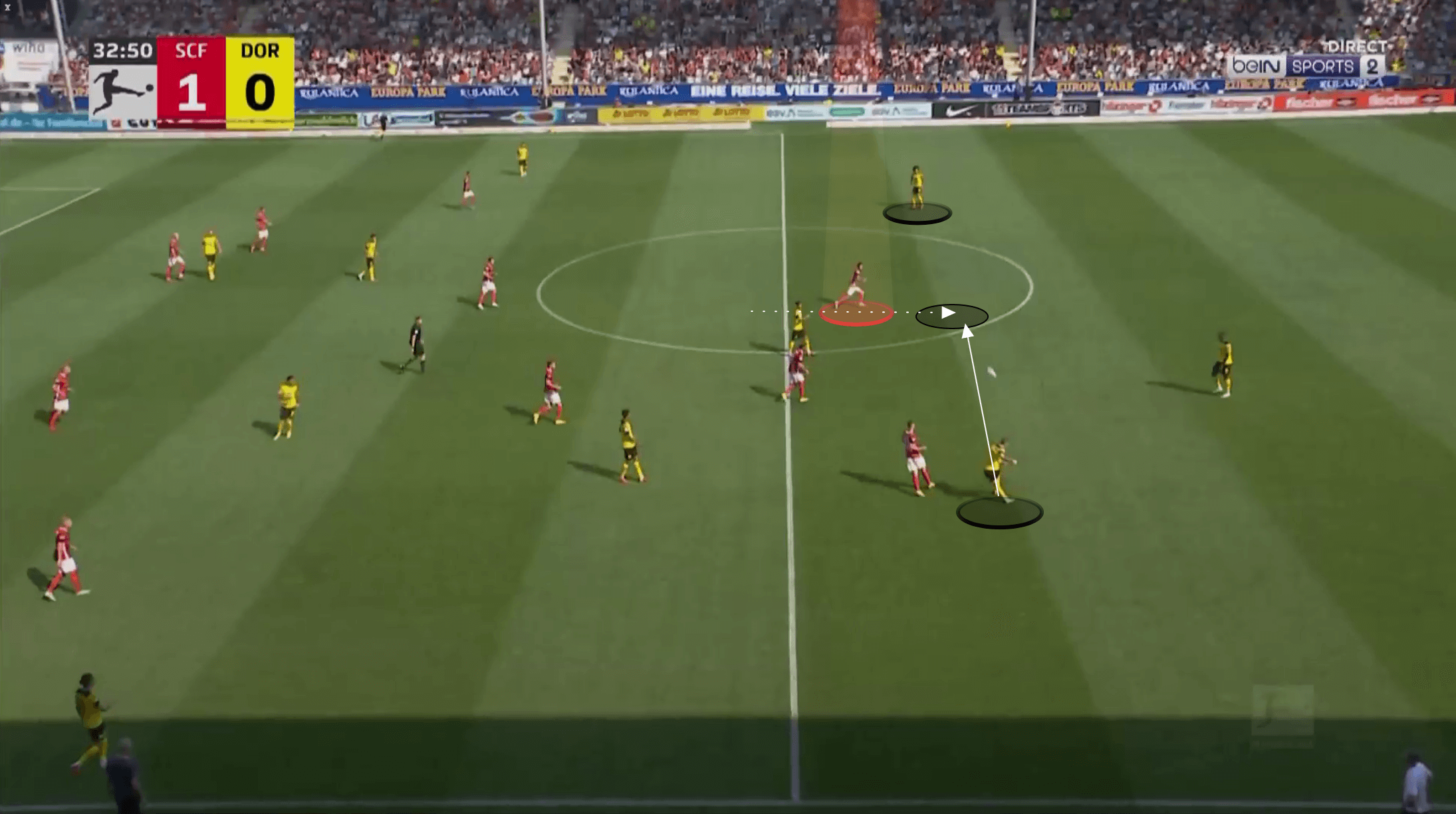 Below he instinctively drives at the Dortmund centre-back, creating space to Yeong-Jeong’s left. He looks to thread a through pass in behind as he does this which is cut out in this instance, however, it shows vision and an excellent understanding of how to create space on a counter-attack. 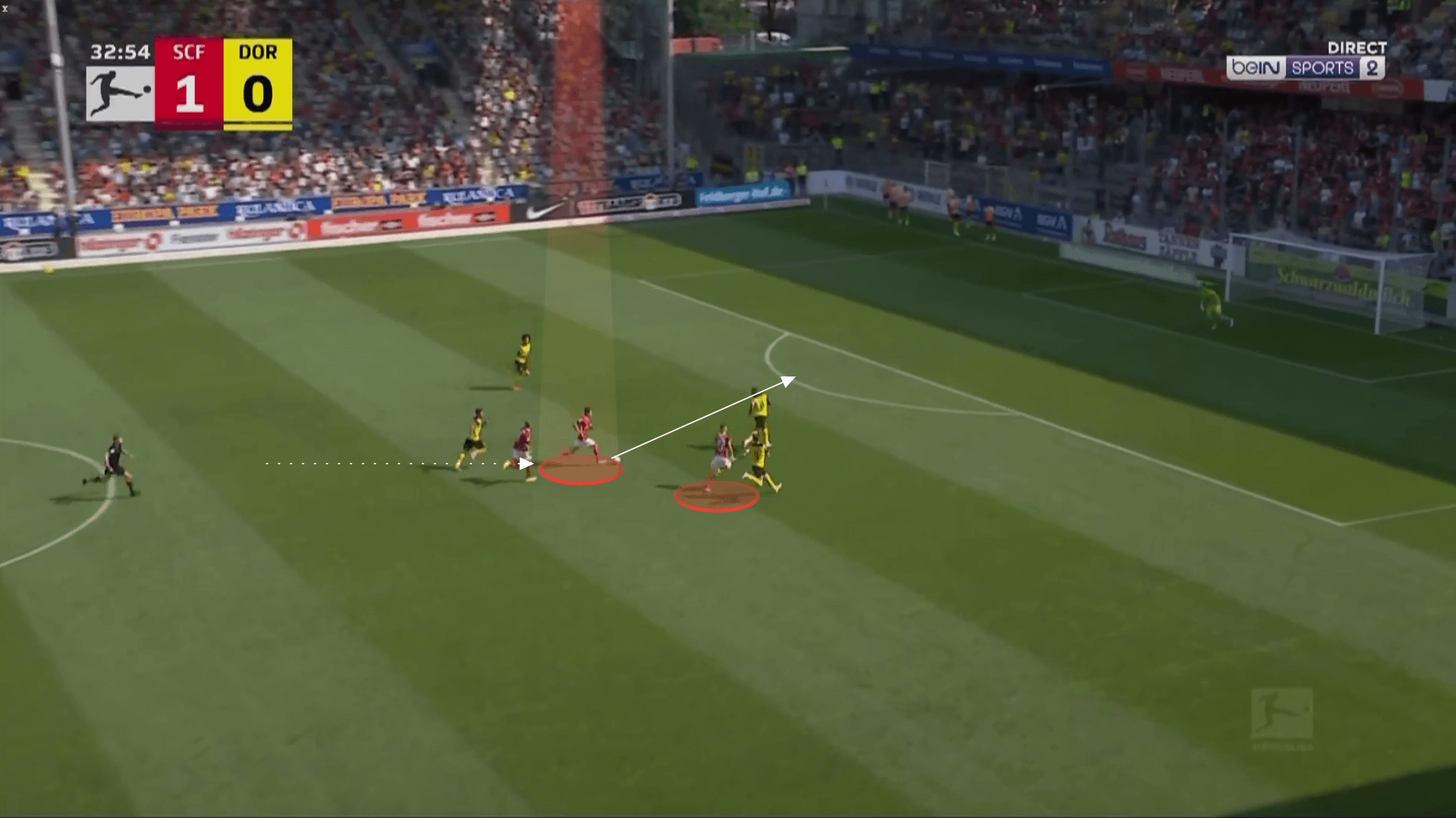 Yeong-Jeong is not the finished article just yet, and any teams looking at him would be wise to allow him to continue to develop in a side he has only just truly broken into to become a regular starter. However, all of the signs are good so far. He has been a versatile and potent attacking threat in one of the Bundesliga’s best sides this season, and if he can add more accuracy to his finishing and a greater volume of creative passing, he could grow into an elite level attacking talent. With rumours abound of Liverpool monitoring Jarrod Bowen at £40 million, perhaps they would be wise to save their money and wait to see how Yeong-Jeong develops this season. He is an equally versatile player, like Bowen, who is direct and highly useful in counter-attacks. He may not be ready just yet, but he is a similar type of player and fits the mould for teams looking for a winger who can fill in at other positions and offer the same quality regardless of his positioning. He is quick, skilful, and has excellent game-reading both in and out of possession. Transfermarkt value him at just £4.05 million right now, but if Freiburg were to continue in their vein of form and clinch Champions League football, this price tag is likely to soar. 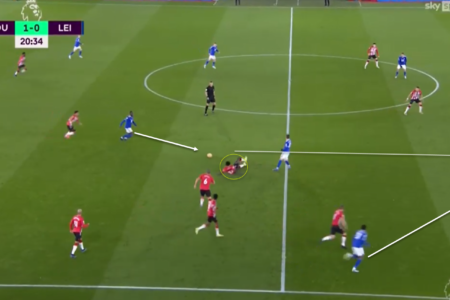 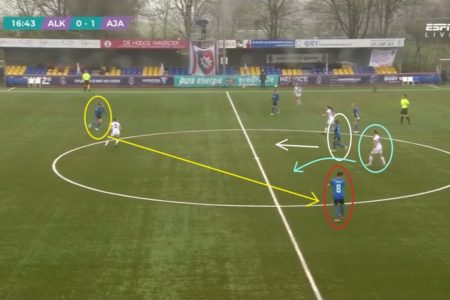 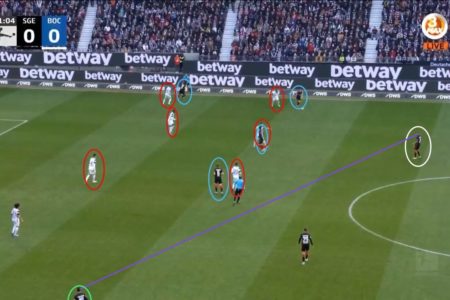