Reece Oxford is well-known to fans of the Premier League. Oxford first broke through at West Ham all the way back in July of 2015, first appearing for the Hammers in a Europa League qualifying game. However, it was the opening game of the season, in a 2-0 win over Arsenal where the 16-year-old Oxford played exceptionally well, anchoring midfield and getting the better of Mesut Ozil on the afternoon. Oxford hasn’t since developed into a central midfielder, rather as a centre-back, and has quietly gone about progressing away from the spotlight of the British media by plying his trade in the Bundesliga. Whilst initially spending time on loan with Borussia Monchengladbach, Oxford then spent a period of time with Augsburg, initially on loan, before signing permanently in the summer of 2019.

This tactical analysis and scout report will look to provide an objective analysis on Oxford’s strengths and areas for development, whilst looking at where he fits in with Augbsurg’s tactics.

Oxford has been deployed this season as a left-sided centre-back, generally in a back four, however, Augsburg have experimented with a back three and again Oxford has found himself on the left side. He is right-footed, but it is a testament to his comfort with either foot that he is able to effectively play here. When it comes to more expansive passing he is likely to rely on his right foot, but in general build-up play and ball circulation, he is confident and has good execution when passing with his left.

His heat map from this season can be seen below, and it shows how wide Oxford can get. There is some action within the opposition half but not an overly high amount and we can ascertain that he generally prefers to stay in a deeper position, even in more advanced attacks. 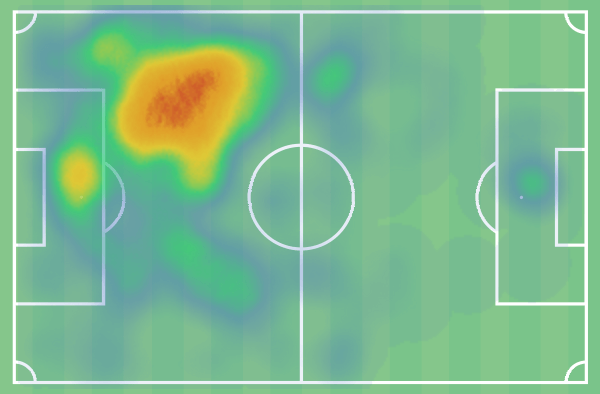 He is an active participant in all possession phases though, and with the ball further afield he will sit deep, as you’d expect from a centre-back, but nevertheless still be in a position, and ready for the ball to be dropped back to him, where he can then make a switch of play from if necessary. He can also keep pressure on the opponent by stepping forward quickly from this position to intercept.

Oxford isn’t a prolific dribbler by any means, with most of his dribbles coming in moments where he has just secured possession and has to evade a challenge. However, the example below shows how Oxford can step forward quickly from his position in defence to make these interceptions and keep the pressure on the opponent. 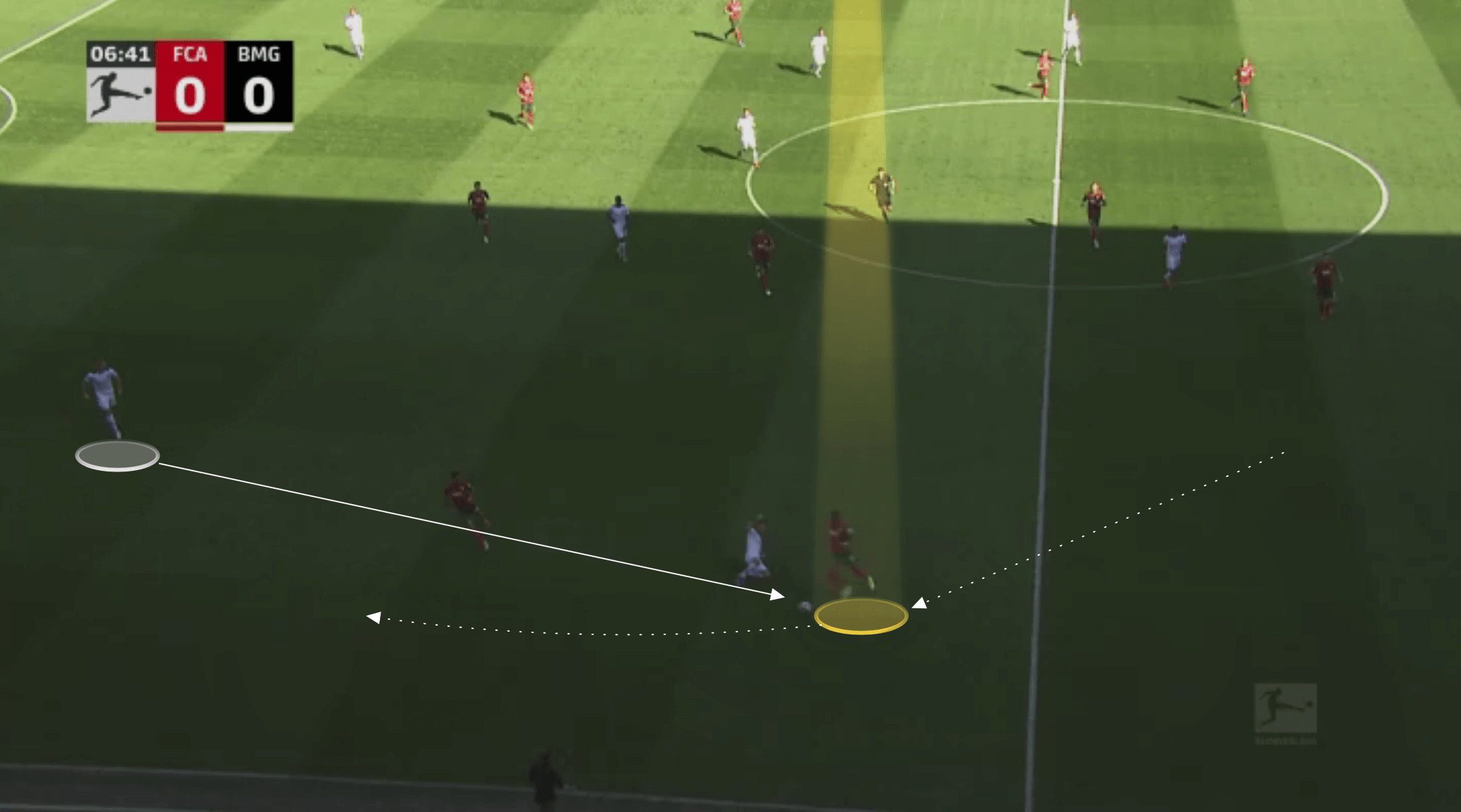 When the ball is deeper he doesn’t shy away from possession and is confident receiving the ball even against a high press. He drops off after making a pass himself, and when the ball is on the opposite flank he will position himself where he can be found with a pass across goal if this option is needed. 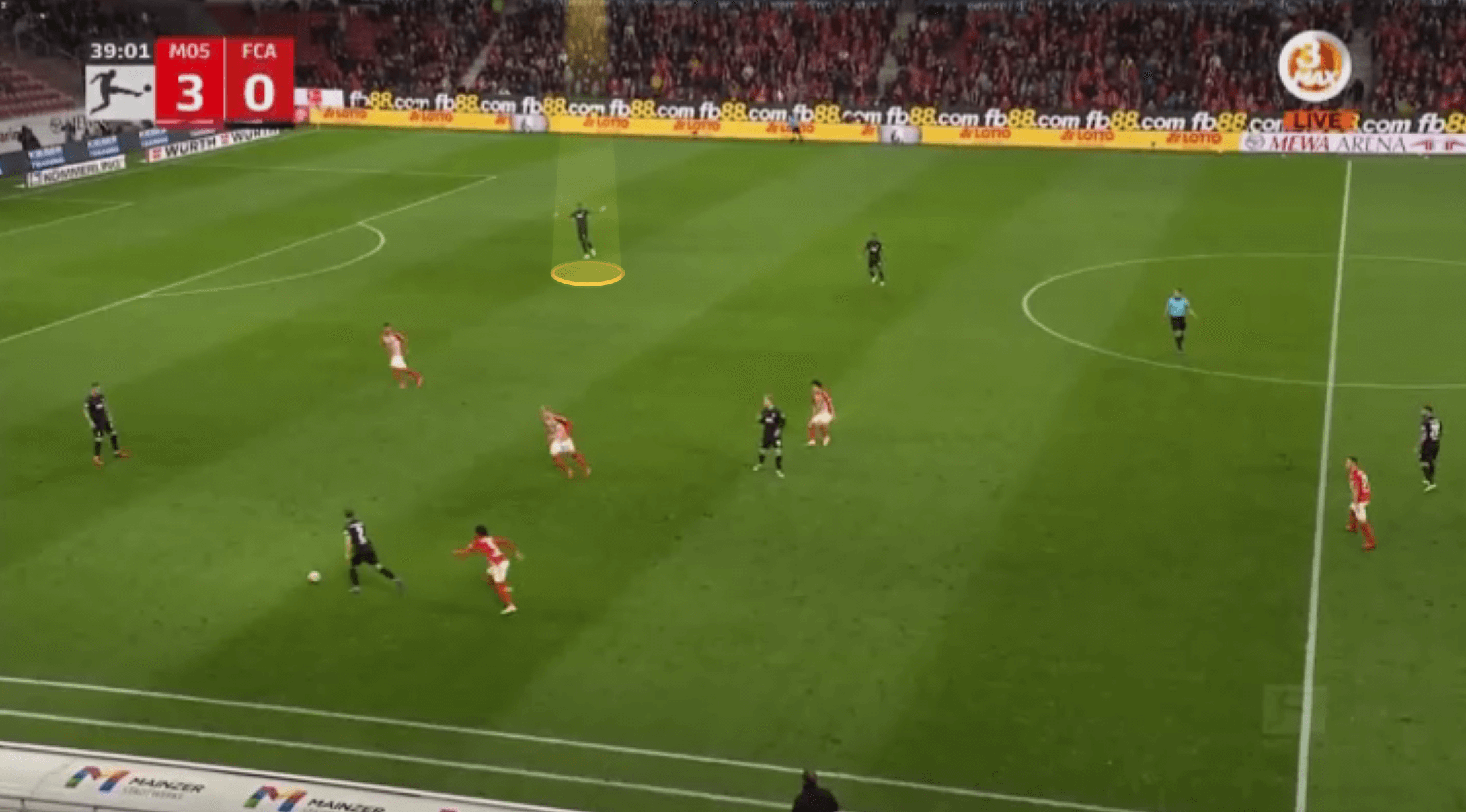 As a passer, Oxford doesn’t stand out in terms of output or overall completion. He certainly isn’t weak in this aspect of his game by any means, but performs at a moderate level, both with volume of passing and with completion.

When looking at Oxford’s data, we compared him with the other centre-backs in the league to have played more than 300 minutes of league football in the Bundesliga this season. We can see when we look at his ball progression statistics that he plays a minimally below-average volume of progressive passes, whilst his completion is minimally above the league average. 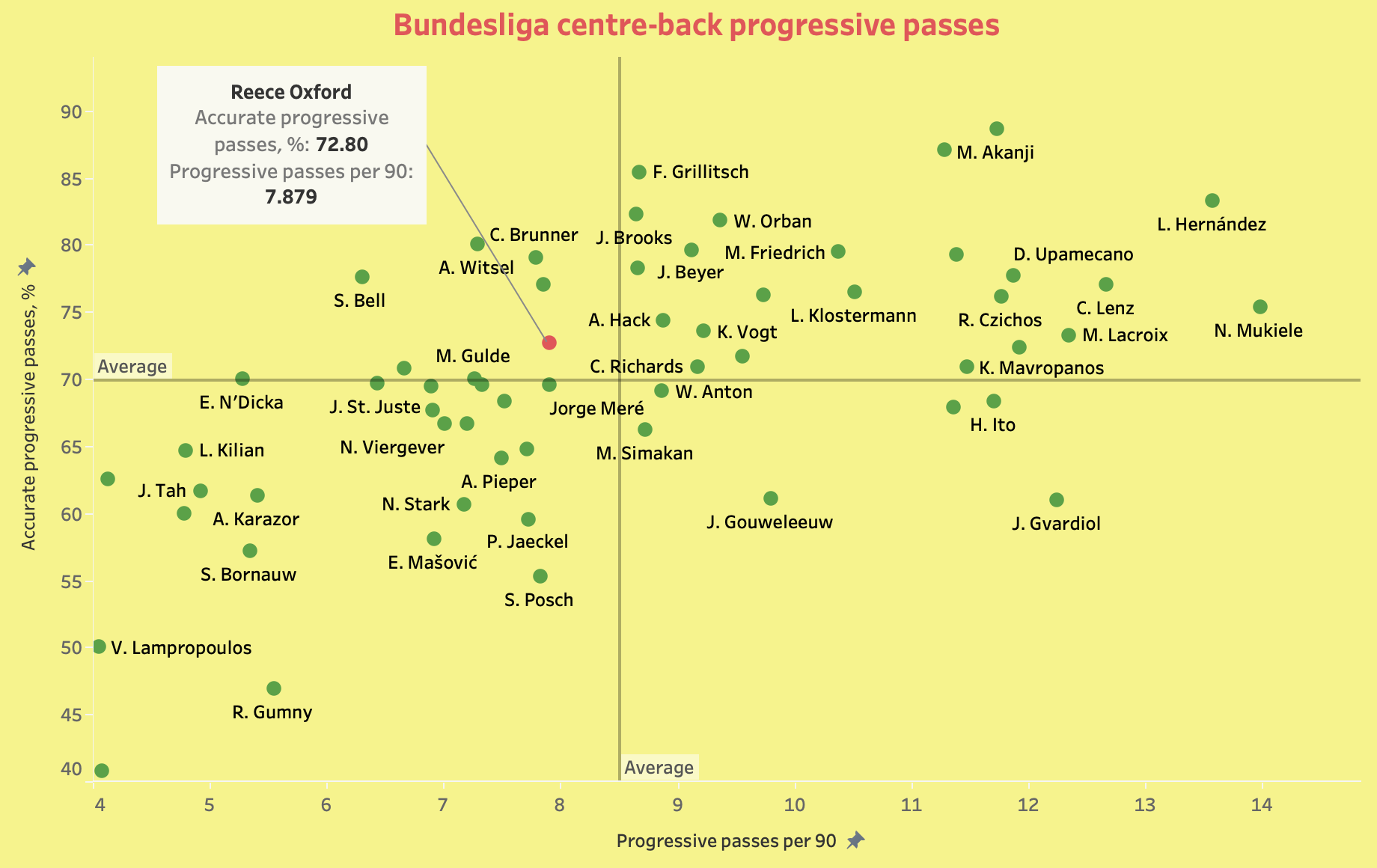 Oxford can break lines in possession, but most of his forward passes that are ground passes, tend to move directly down the half-space. He will look for a forward or winger to make a movement into a deeper area from an initially high starting position, and will then look to punch the ball through the gap, like in the image below. 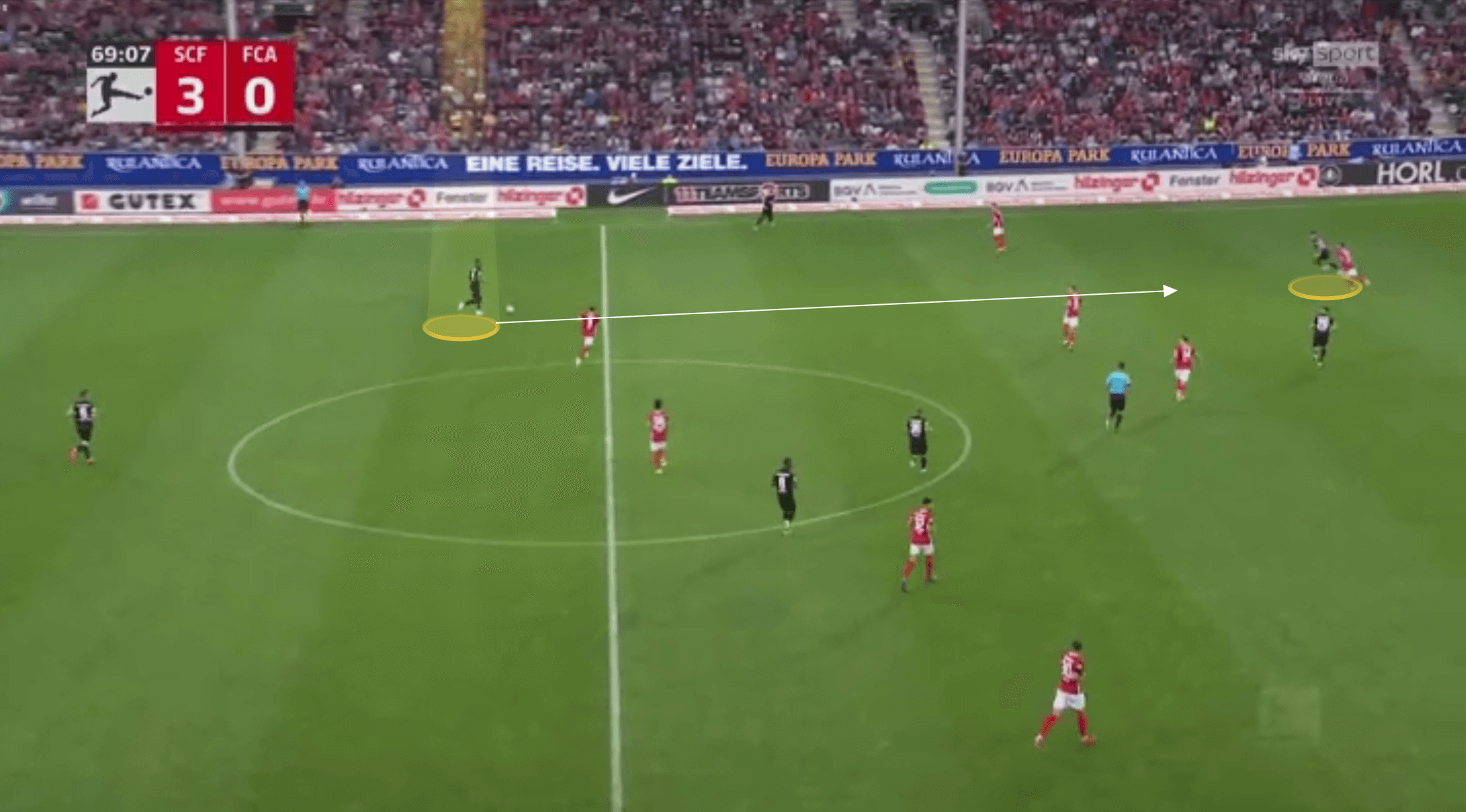 With these kinds of forward passes there is often enough space to successfully find the teammate, rather than looking to break a compact pressing shape when in possession 20 yards from his own goal. Oxford is far less likely to attempt progressive passes in a deeper position, or at least passes that remain on the ground.

The vast majority of Oxford’s forward passes come from longer balls or diagonal switches of play.

He has an impressive range of passing, quality technique, and a composure when seeking to hit these balls. He recognises the opportunity to do so quickly and is generally accurate with them. 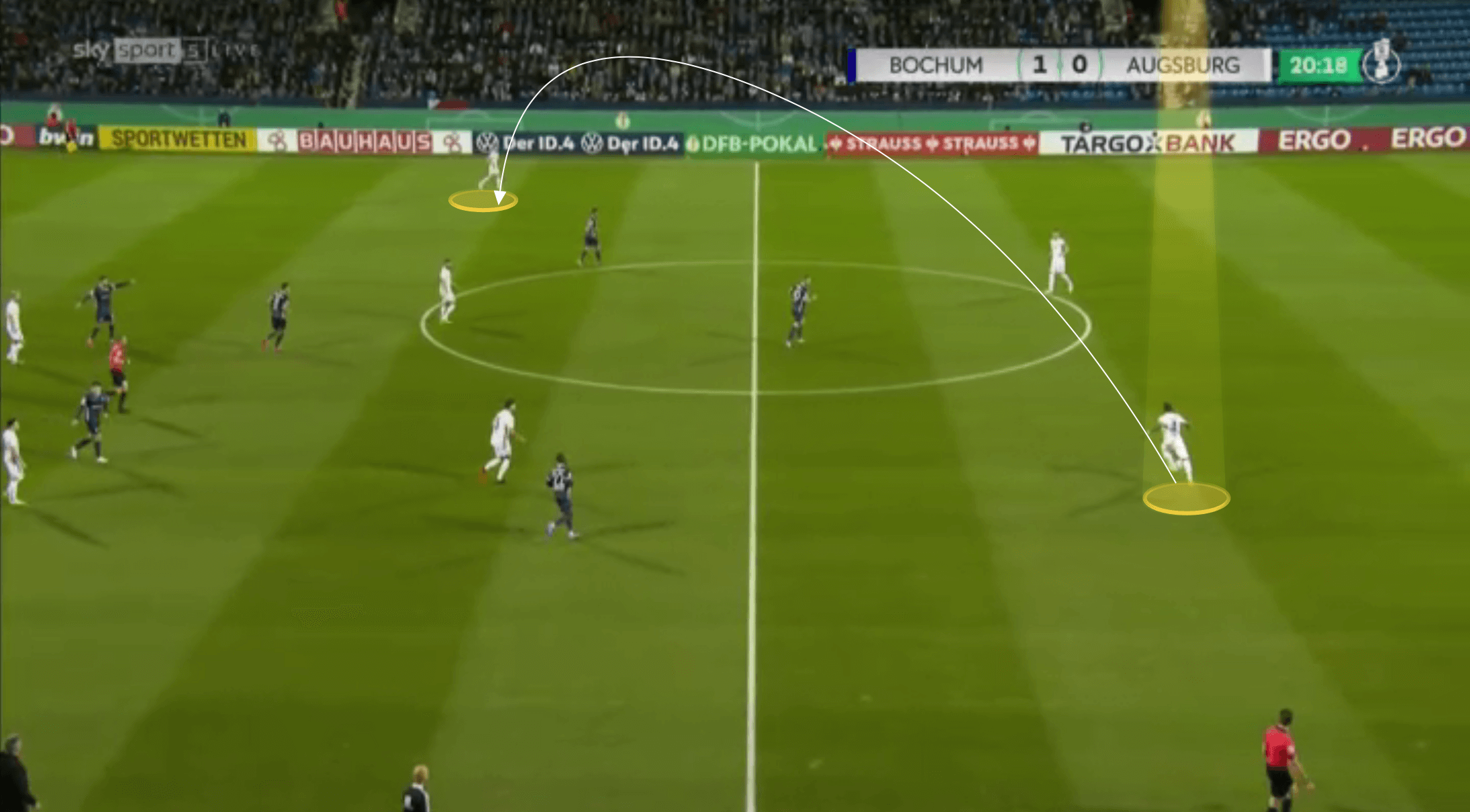 He can pick out the feet of a teammate from distance, but equally both he and his full-back/wing-back may recognise the opportunity to hit space behind the opposition backline, and if Oxford has the ball in space with few short passing options ahead of him, he may look for the more searching long ball. 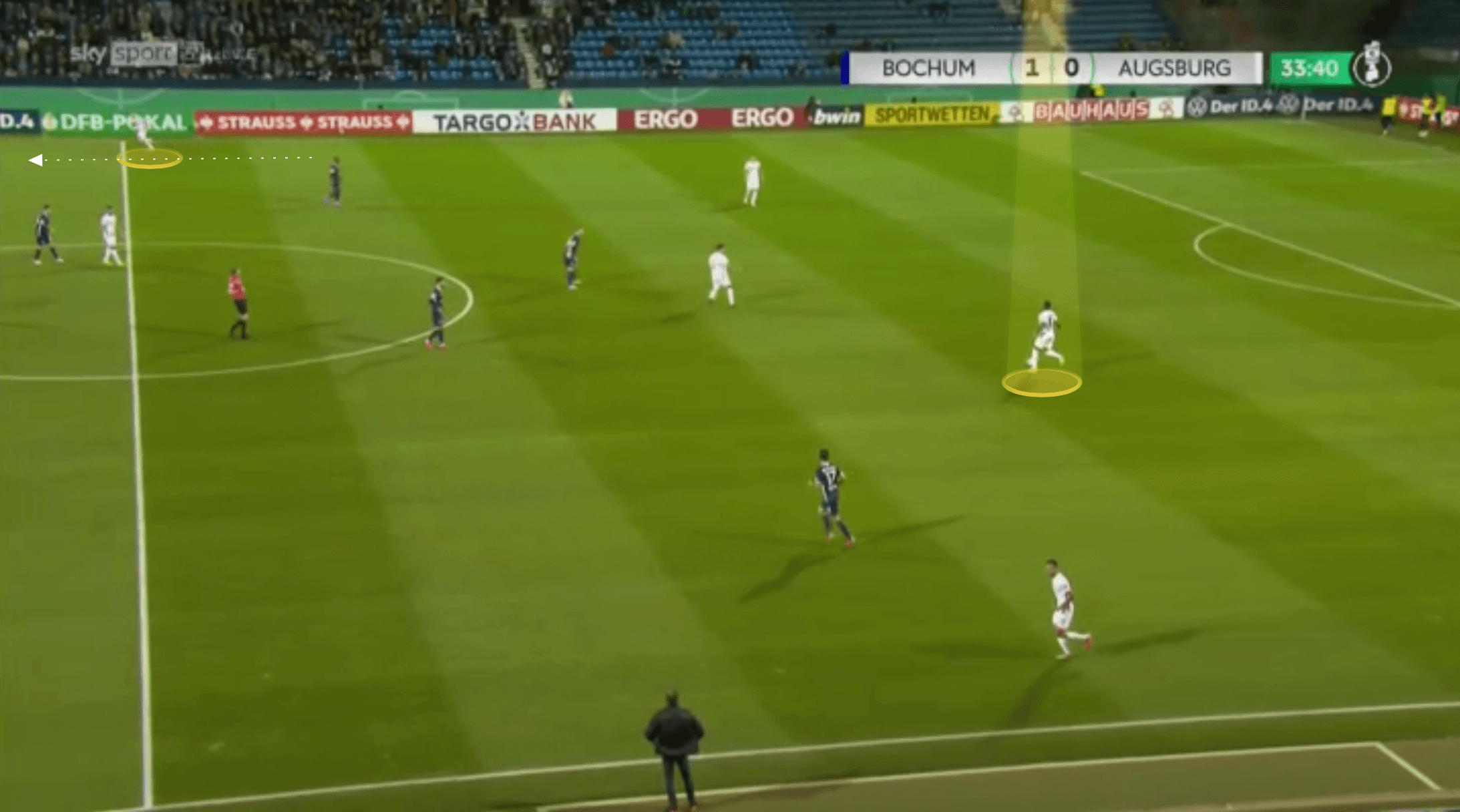 In the image above the wing-back recognises that Oxford has the space to potentially hit this pass and makes a quick run in behind the Bochum backline.

Below we can see how Oxford is able to find this player with a slightly lower, drilled long ball into the space. 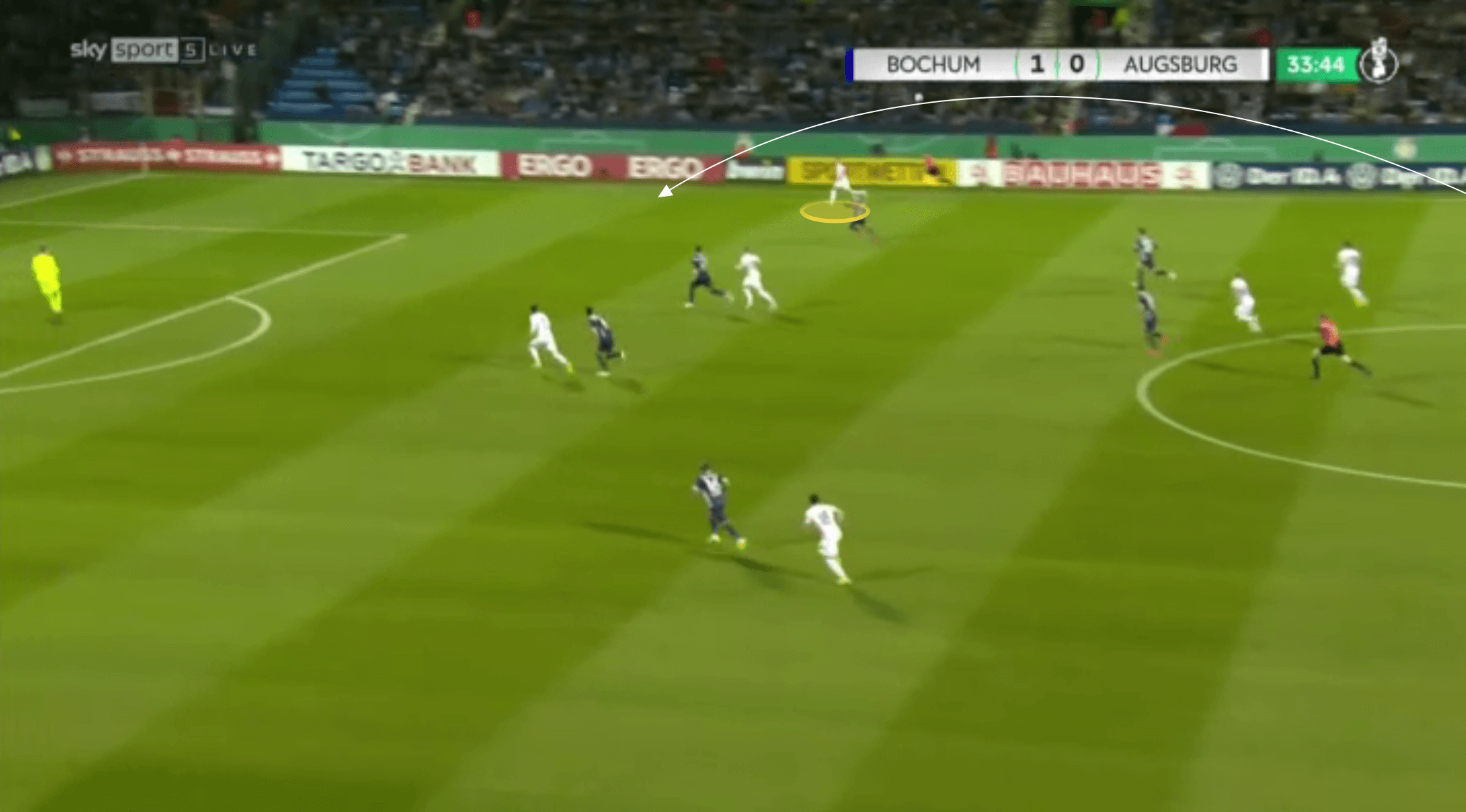 Looking at Oxford’s defensive data gives us an overview of some key details before we look at in-game examples. Firstly, aerially he is performing slightly below the league average. Even though he is involved in few aerial duels, his 55.87% win rate isn’t overly impressive, and this is an area he will need to develop. 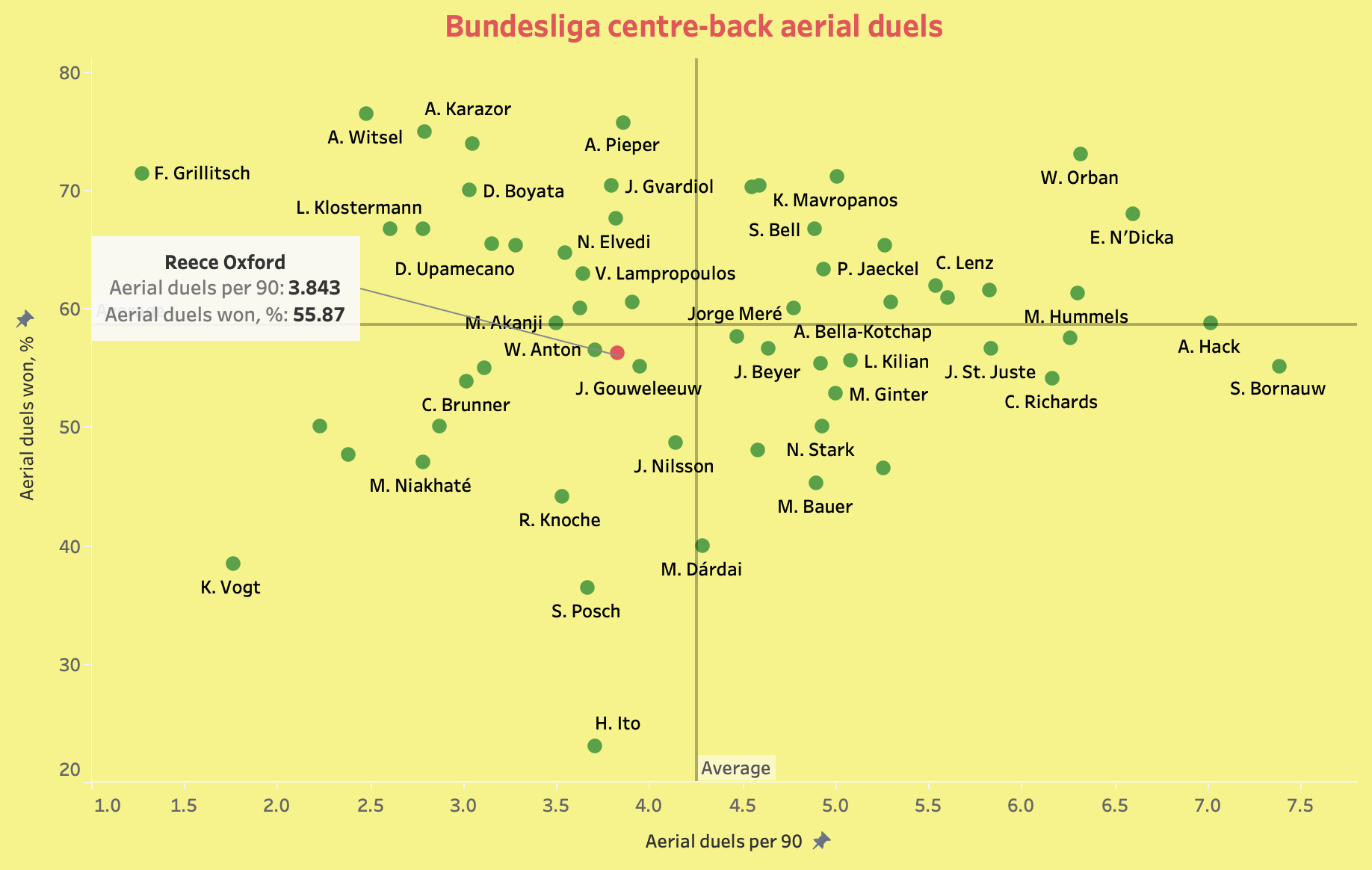 He has a slight habit for turning onto his side or slightly showing his back as he competes with an opponent, almost giving the impression of pulling out of the duel. Whilst this is unlikely to be his intention, if he can face forward more consistently he is obviously going to improve his win rate from this small adjustment. Oxford has good height, standing at 1.9m, and this is an aspect of his game he will need to work on.

As for ground duels, Oxford is more impressive. Once again he isn’t involved in a particularly high number of duels, ranking just above the league average with 6.93, but his 76.01% win rate on these duels is much more impressive. 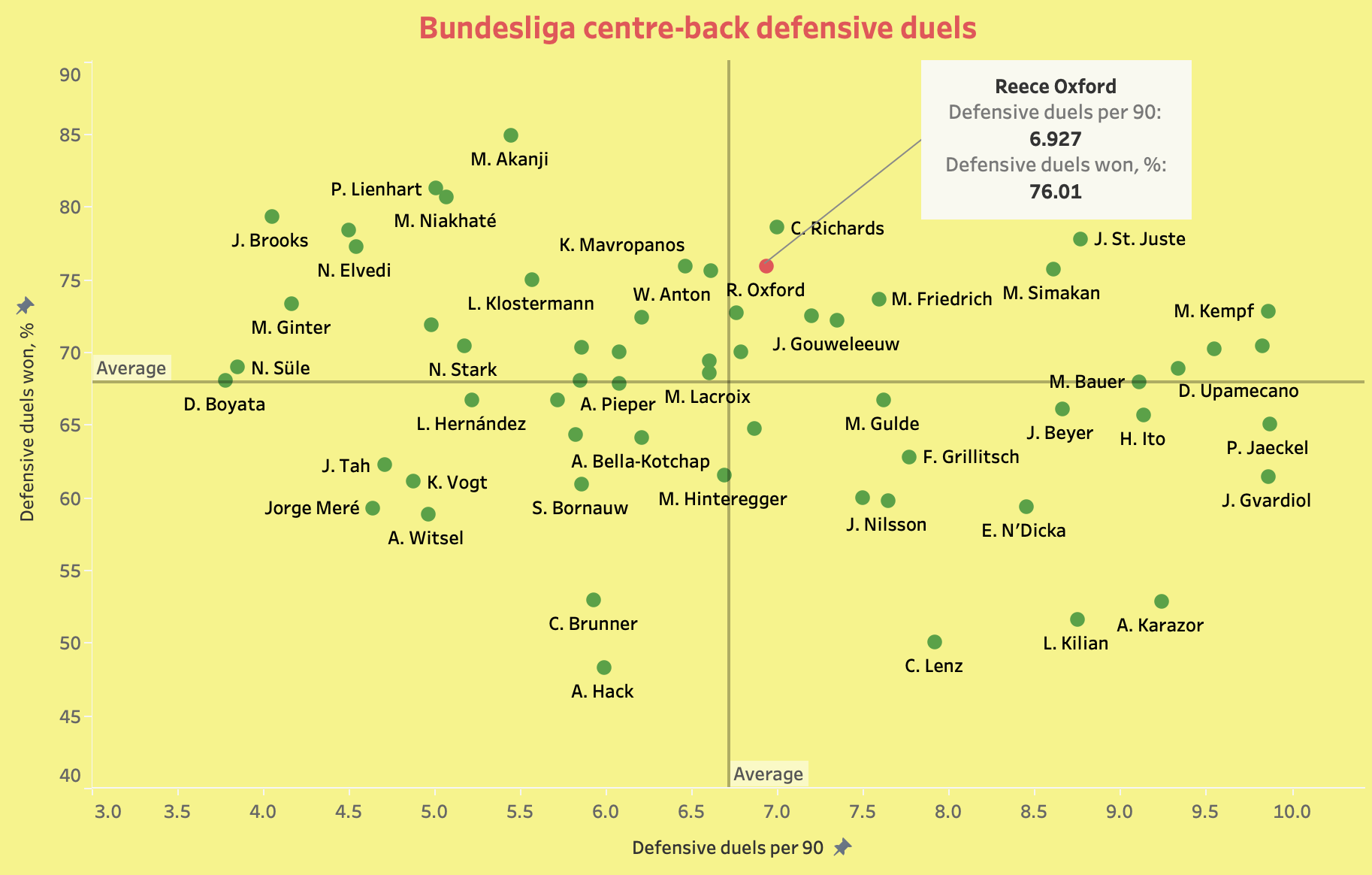 If a team has an aerially dominant centre-back who can break lines consistently with medium length passes into the midfield, Oxford could potentially be the perfect foil, given his defensive ability and penchant for a long pass.

Finally, looking at Oxford’s shots blocked per 90 and possession adjusted interceptions per 90, we can see that he ranks above the average for both of these metrics. In fact, his ability to make interceptions on a consistent basis is a key strength of Oxford’s defensive game and will be highlighted in more detail momentarily. 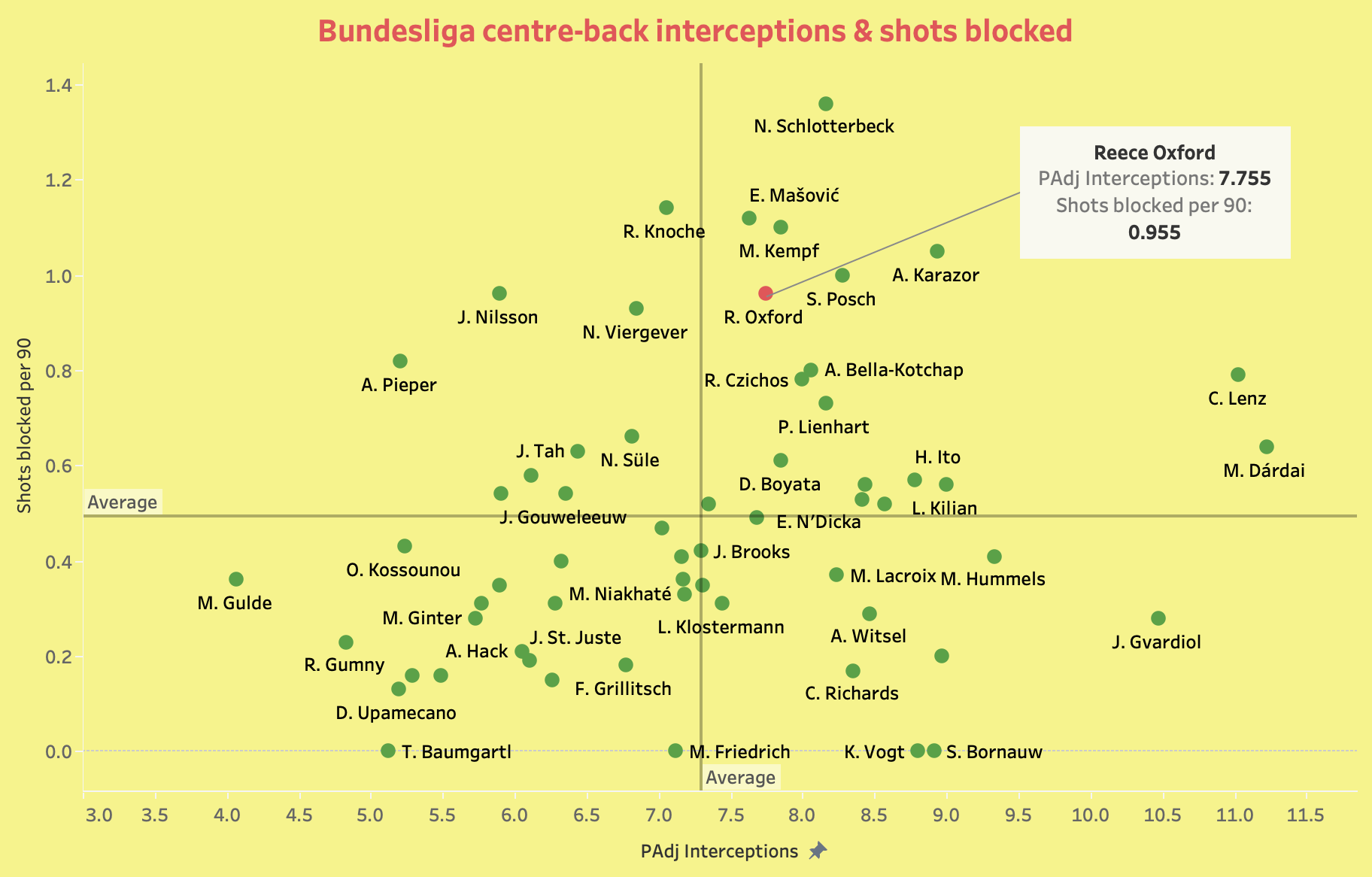 Whilst Oxford has exceptional timing when making many of his tackles, he can take risks with some challenges, like in the following image. This slide tackle inside the area came as both players raced towards the ball at the same moment, with Oxford timing the challenge well, but admittedly taking a fair amount of the player with the ball too. He got away with this due to the aforementioned timing, but it is an example of Oxford’s habit of potentially switching off or making a rash decision in odd moments, and even though he has talent in defensive duels, he is capable of an error in judgement. 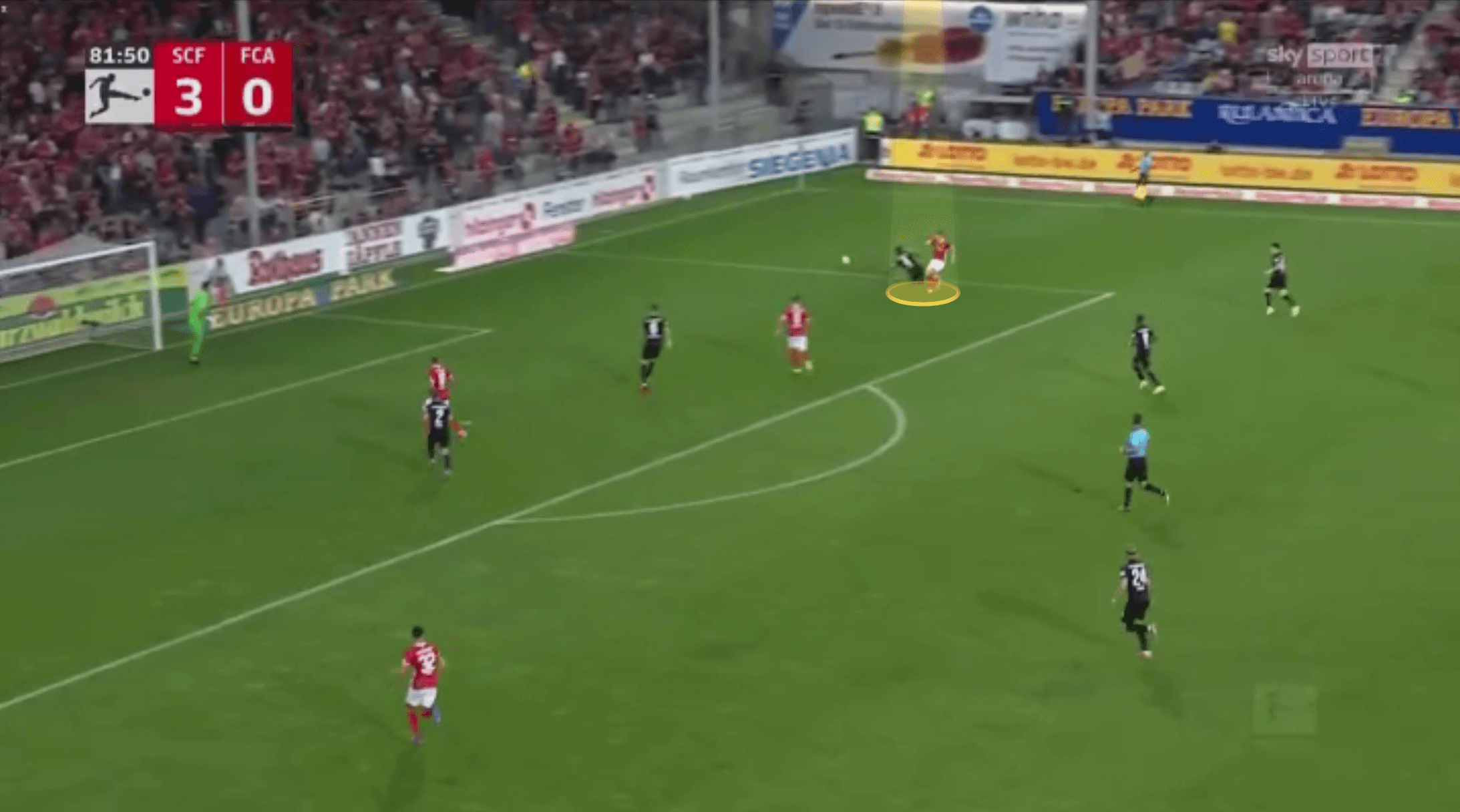 Oxford’s positioning is of the highest quality. When presented with an opponent driving forward towards the defence, he keeps his eye on the player but shows awareness of runs being made by other opponents around him. He gets into a side-on position, ready to cover the space behind, but may still step forward in this moment if the ball-carrier takes a heavy touch. He has good acceleration over shorter distances and maintains a consistently good top speed over longer distances too. As a result, Oxford is effective when dealing with a team looking to regularly play through passes to a quick striker in behind. He has the pace to deal with the striker, but also the game-reading to make interceptions before the ball even gets in behind. 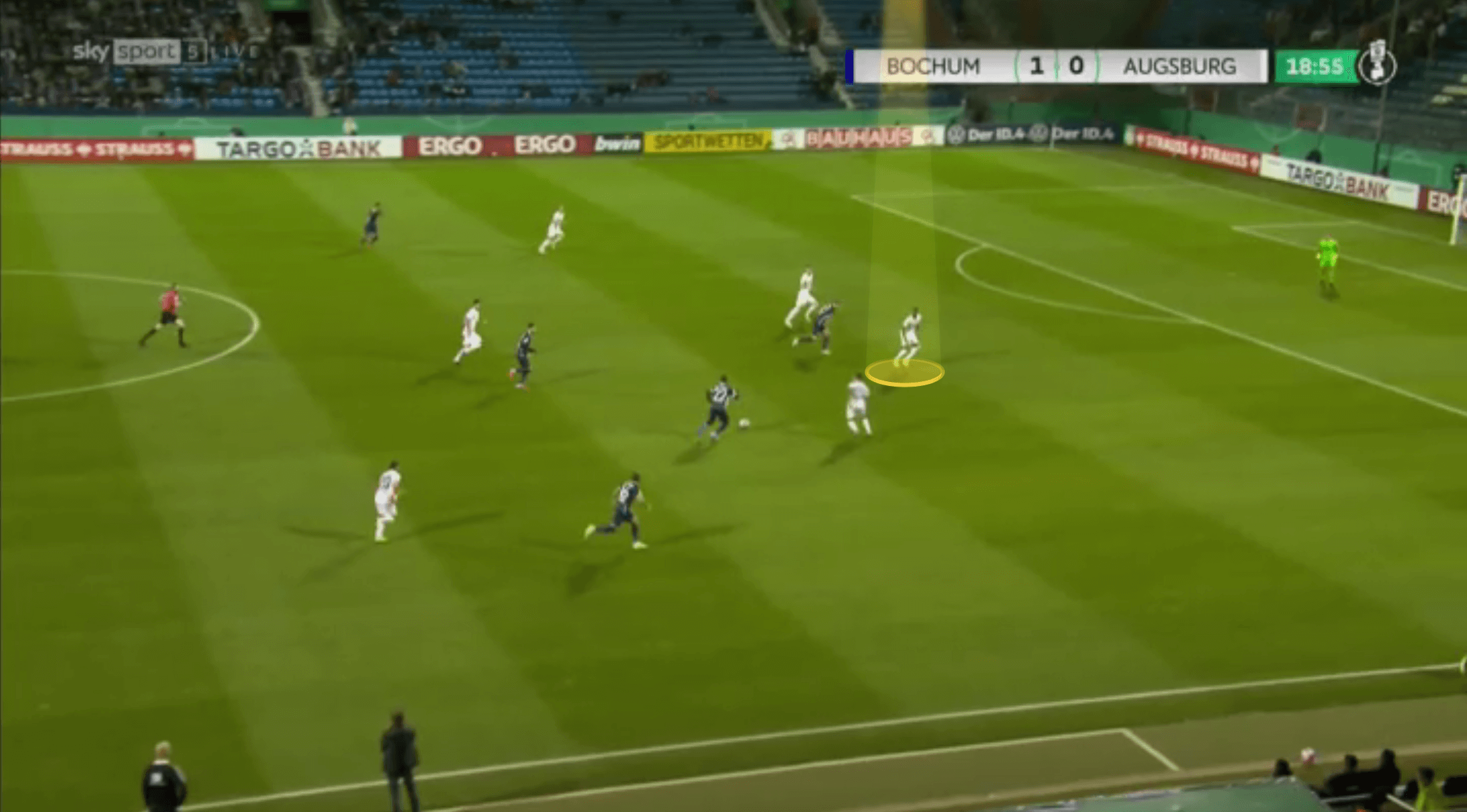 Oxford will adjust his positioning as the ball is played forward, with the next four images showing two similar examples of this pattern from the centre-back. Firstly against Bayer Leverkusen, Oxford is initially in this side-on position, ready to cover the space behind him, and is still five yards away from the closest forward. 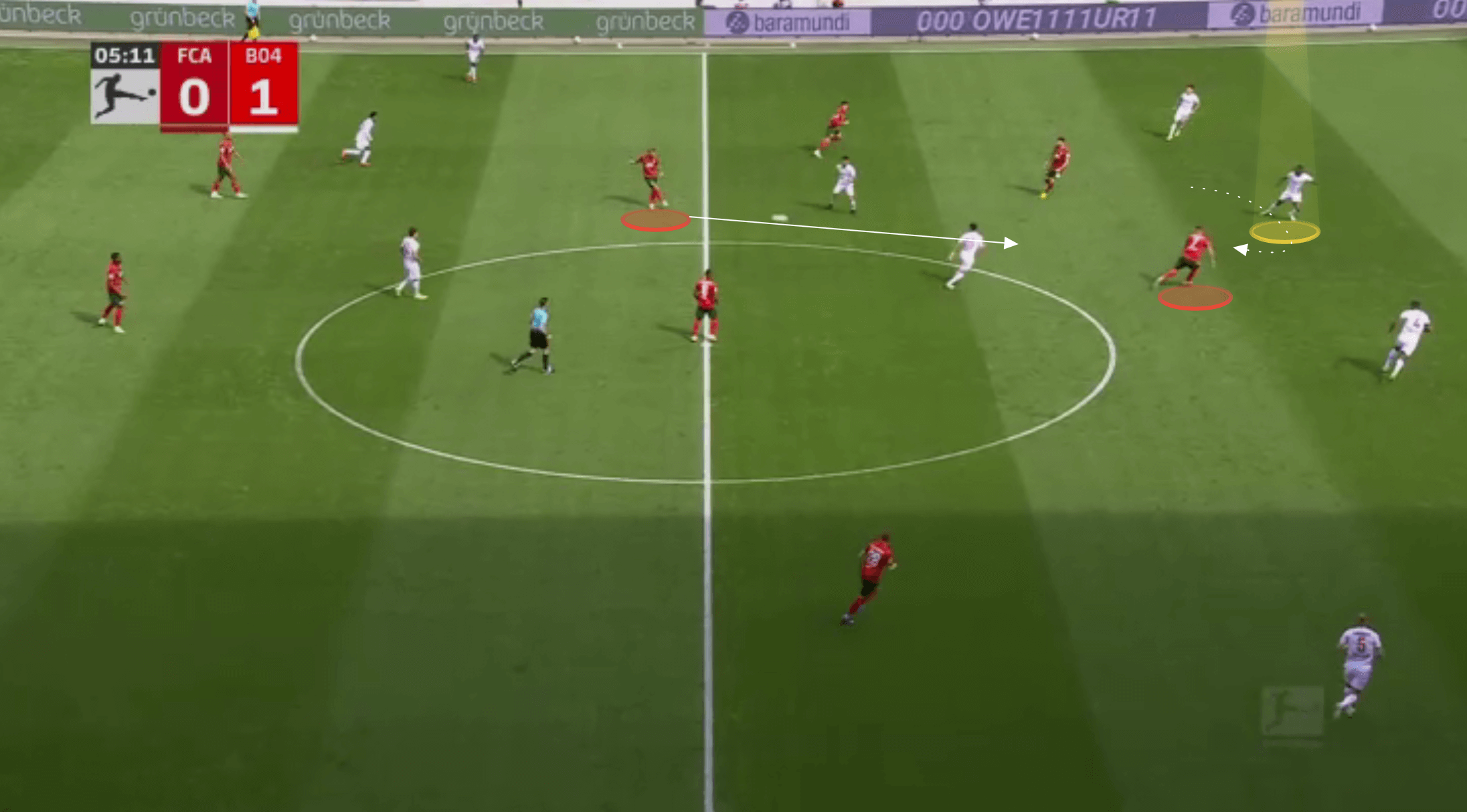 As the ball is played forward he recognises quickly that the pass is slightly under-hit and he adjusts his run by stepping forward, in front of the attacker to make the interception. 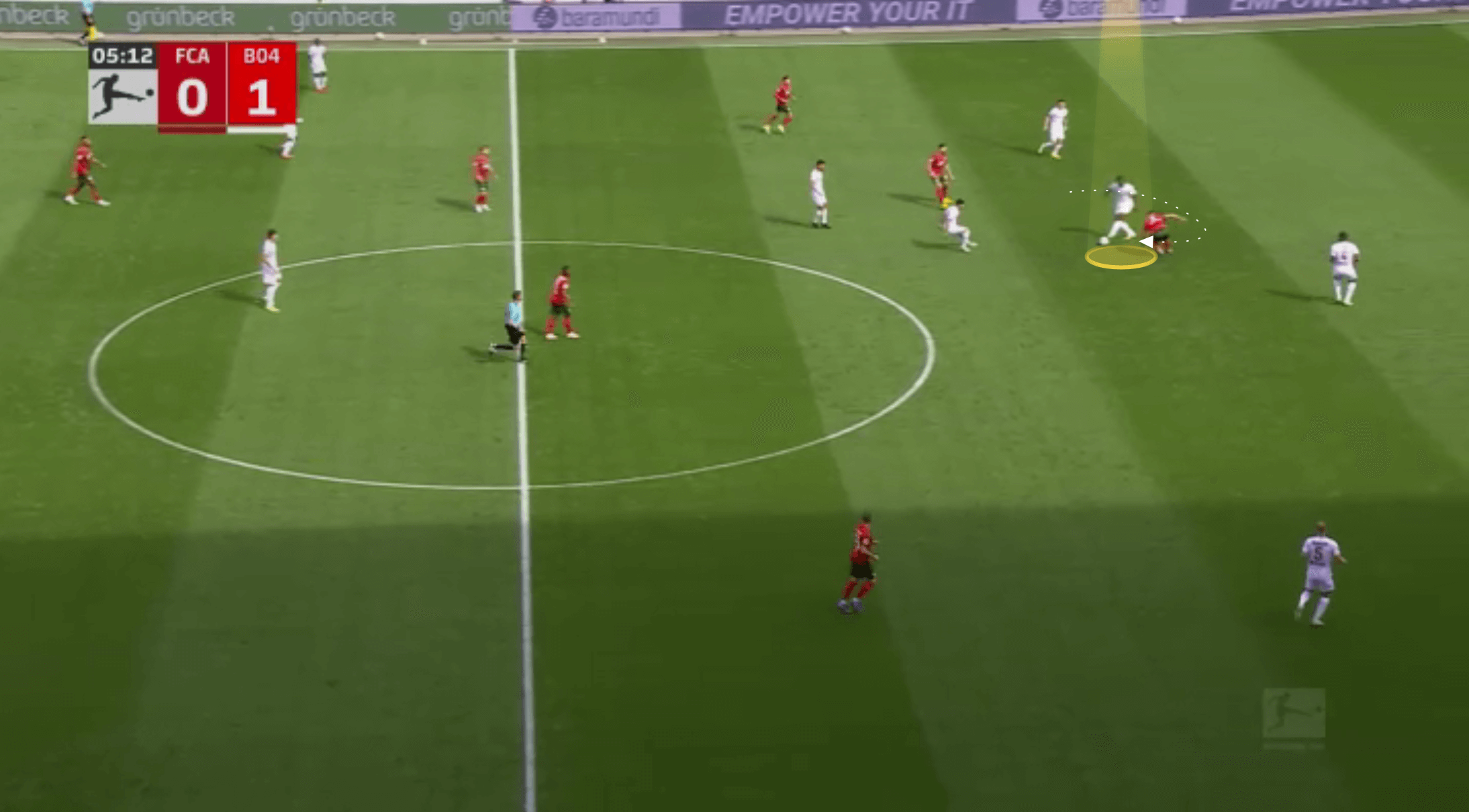 He can do this even if the pass is played at a good weight, and if closer to the forward he will be ready to step in front, showing an anticipation of the pass being played before the forward does. This time against Eintracht Frankfurt we can see that he initially tracks the run of the centre-forward. 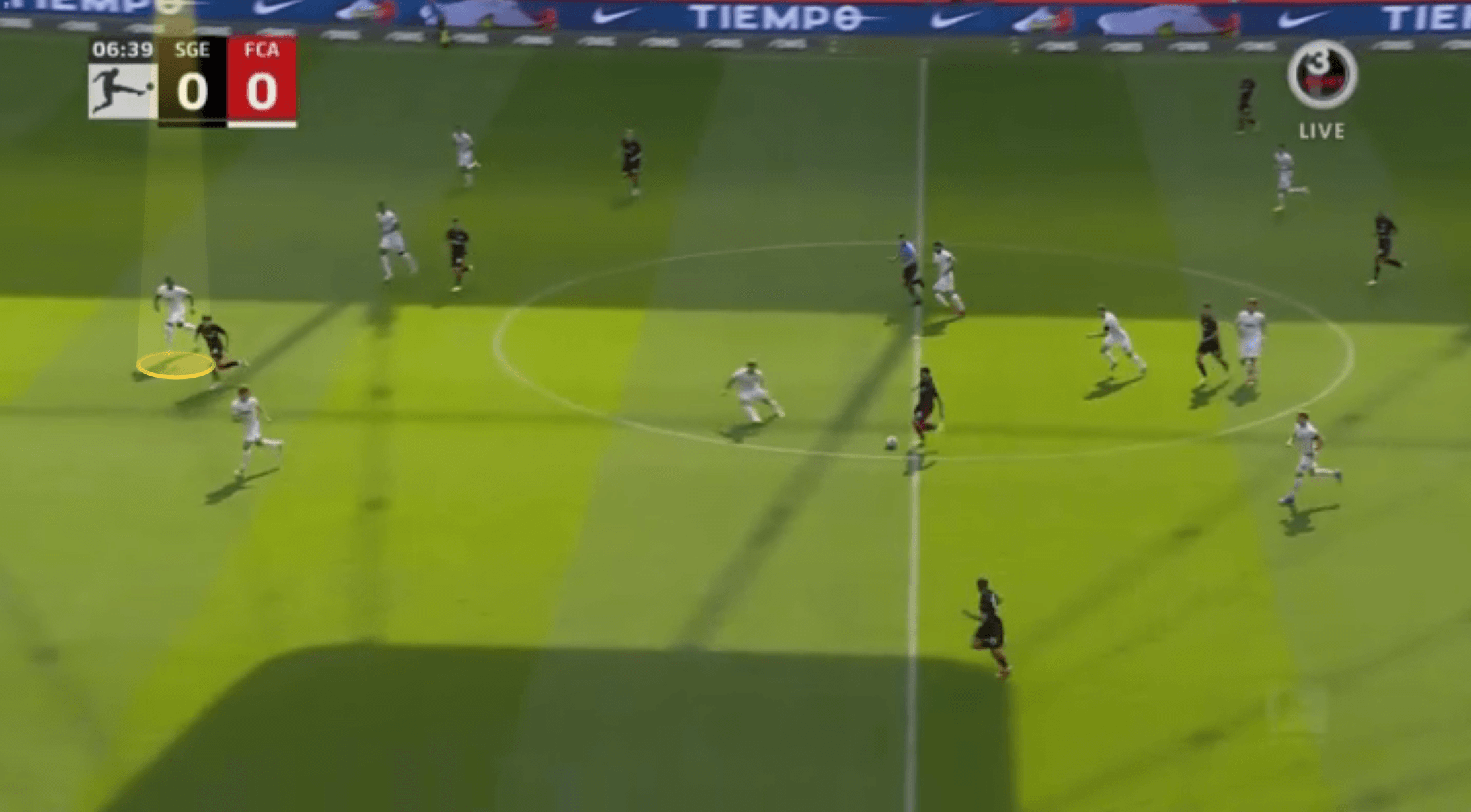 However, once again he is able to react quicker than the striker, and if the ball is played close enough to him, as it is in this example, he is aggressive at checking his run and stepping in front of the forward to make the interception. 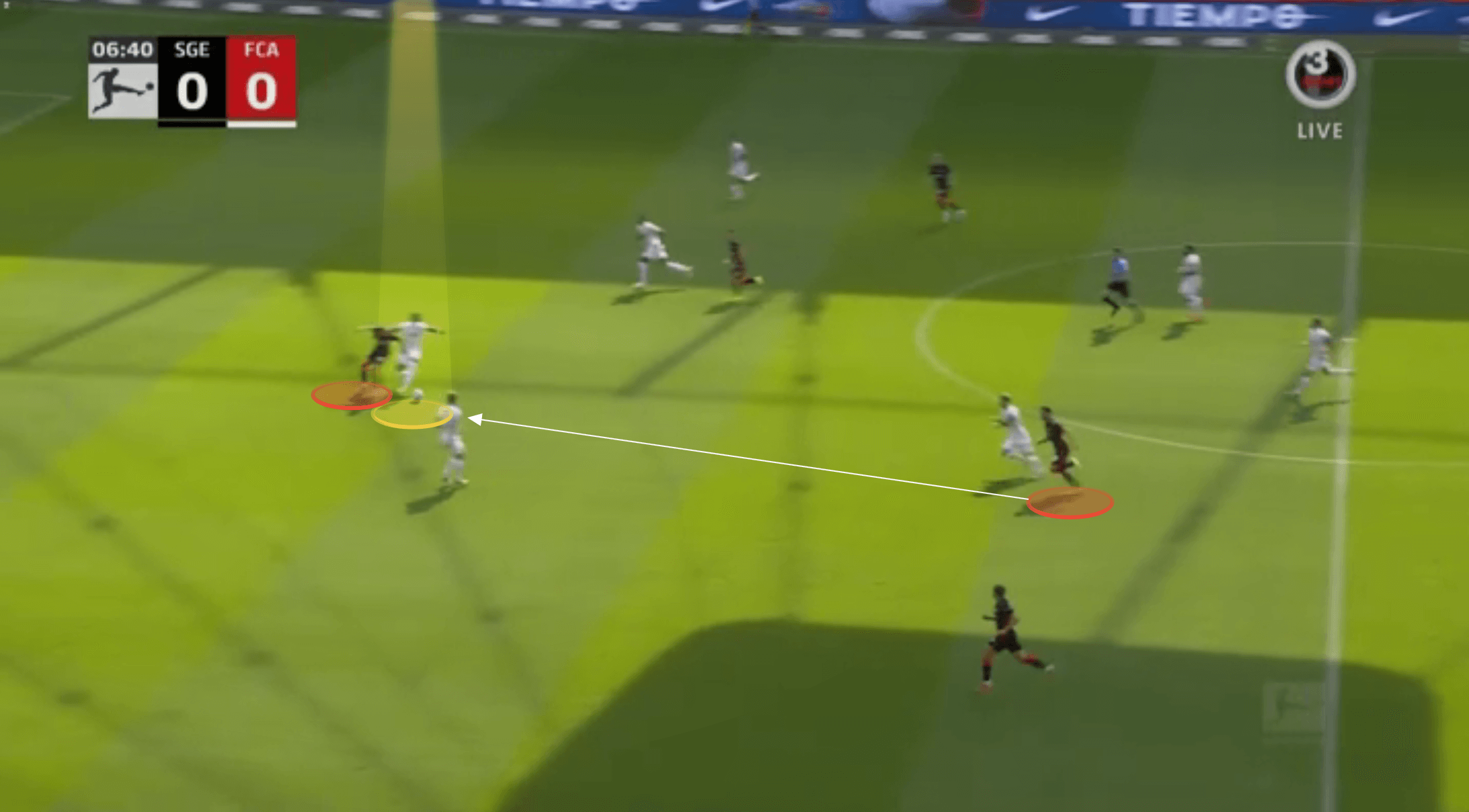 Oxford is still some way from being the player the press believed he would be at just 16 years of age, however, he is quietly building a solid career, turning himself into a reliable ball-playing centre-back who has plenty of quality as a defender, and still with room to grow too. Oxford is still only 22 and given the price tag on English players domestically it is surprising that he hasn’t been linked with a move back to the Premier League. If he continues to develop as he is doing with Augsburg then we may well see him back in England within the next few years.