In the DFB Pokal final, Bayer Leverkusen and Bayern Munich battle for the trophy. Whereas Bayern could win the double as they were already crowned Bundesliga champions, Leverkusen have the opportunity to win a title again (their last title win was back in 1993 winning the DFB Pokal) after they missed the qualification for the UEFA Champions League in the Bundesliga.

In the following match preview, we will provide tactical analysis of their last meet-up and explain what we can expect from the DFB Pokal final from a tactical perspective.

Why Bayern will be the clear favourite

Bayern did not just win the Bundesliga title, but they are also in excellent form under head coach Hansi Flick. They’ve won their last 16 games and have won a total of 28 of 31 matches under Flick. There was a clear improvement in terms of their positional play as well as their counter-pressing structure using Flick’s favoured 4-2-3-1 system. Moreover, they press higher up the pitch and with a higher intensity. These are all things that lend Bayern more dominance. Something which Leverkusen, a side that usually like to have the ball for themselves might not like.

Furthermore, Leverkusen’s last game against Bayern spoke a clear language. Bosz’s team lost the game 2-4 and conceded further high-value chances. The fifth of the Bundesliga set up in a 3-4-3 system that allowed to put pressure on Bayern’s back line and especially full-backs as the ball near wing-back would move up the line during the press. That way, Leverkusen could press left-back Alphonso Davies and prevent the Canadian from dominating the flank.

Within their own half, Leverkusen created a back five that allowed one of their centre-backs to step out of the back line if a Bayern attacker received the ball between the lines.

Leverkusen’s biggest issue was to defend Bayern’s forward runs. Both, on an individual level and on a group tactical level, Bosz’s side failed to defend the space behind their back line. Sometimes more than just one centre-back left the back line which led to a huge gap. In addition to that, their wing-backs did not adjust their positioning to the height of the centre-backs. And last but not least, the body shape of the central defenders was poor as it disabled them to quickly turn and follow a forward run of a Bayern player.

But although Bayern have only lost two games under their new manager so far, there is one thing that can give Leverkusen hope – one of Flick’s two defeats was the 1-2 against Leverkusen. Leverkusen were efficiently used their chances created through quick counter-attacks and Leon Bailey scored both goals.

When playing against Bayern, there are several things which need to be done throughout the whole game in order to have a chance of winning the match.

The biggest weapon that Bayern have are their crosses into a flooded penalty area. Once having progressed up the pitch, they take in positions from which they can run into the penalty area to receive crosses from various positions. Their flexibility in terms of crossing positions makes Flick’s side extremely unpredictable and therewith threatening. While their full-backs often put in crosses from out wide, midfielder Kimmich likes to put in crosses from the half-space towards the far post, often when the opposition back line are moving away from the goal.

Kimmich’s pivot partner Leon Goretzka is a good header and often sneaks into the box from a deeper area as well. His runs are difficult to defend as the defensive midfielders would need to follow Goretzka because the defenders are already marking the likes of Lewandowski and Gnabry in the box. Therefore, Leverkusen coach Bosz will need to make sure that Bayern do not have much possession around their penalty area.

Under Hansi Flick, Bayern regained their dominance and some players are flourishing again. Thomas Müller, for instance, plays one of the key roles as a fluid “Raumdeuter” within Bayern’s attacking department. In Leverkusen’s last game against Bayern, we could see Müller often drifting towards the wing. Either to create an overload or to create space for the winger such as Serge Gnabry or Kingsley Coman to drift into.

Bosz will need to prepare his side to be capable of preventing Bayern from playing into areas where Müller can receive and turn. And at the same time, the defenders need to be aware of the threatening forward runs of Bayern’s wingers.

Only if Leverkusen are capable of shutting these Bayern players down, as well as avoiding Bayern to enjoy much possession around the penalty area, Bosz’s team have a chance to succeed against Flick’s side.

Despite their improved attacking structure and counter-pressing, Bayern still possess some weaker spots that Leverkusen will need to exploit. Especially on the counter, Bayern are still vulnerable, especially behind the full-backs that like to move up the pitch during the attacking phase.

Moreover, centre-back Jerome Boateng does not possess as much pace as his partner David Alaba. In terms of defending deep forward runs, this can become an issue. Therefore, especially left wide forward Moussa Diaby was given the most opportunities on the break in their last game against Bayern. Once regaining possession, Diaby would look to attack the gap between Boateng and right-back Benjamin Pavard. Receiving in space, he could utilise his advantage in pace.

Moreover, Bayern’s 4-2-3-1 defensive system requires defensive contribution of their wingers. Especially after an unsuccessful press up front, they have a long way to go in order to support the full-backs out wide. As they sometimes miss to get back in time, there can appear space for Leverkusen when Bayern shift through and Leverkusen quickly switch sides.

However, Leverkusen will need to overcome Bayern’s pressing first. Again, the distance between Bayern’s winger and full-back can become big when pressing high up the pitch. Unlike Liverpool during the press, Bayern’s full-backs rather stay within the back line. Therefore, it would be possible to progress up the pitch by getting behind Bayern’s pressing winger. In the centre of the pitch, Bayern are usually well protected with their 4-2-3-1 setup. But the open space between winger and full-back can be Leverkusen’s chance to successfully play out of their own half.

And this might not only be an offensive tool but also a defensive one as retaining possession against Bayern is important to reduce the pressure off their own defence.

As explained in our analysis, in Bayer Leverkusen and Bayern Munich two dominant sides meet each other in the cup final. It is likely that we will see similar tactics as in their last meet-up. Leverkusen will need to bank on their offensive transitions, but at the same time make sure that Bayern are not allowed too much possession high up the pitch. Bayern, on the other hand, will probably attempt to improve their rest defence.

It will be interesting to see whether the DFB Pokal final can fulfil the high expectations. 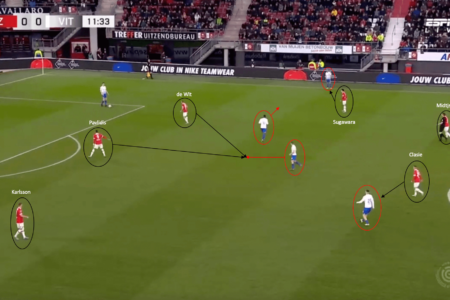 When Pascal Jansen was installed as interim boss at AZ Alkmaar in December 2020 after the dismissal of Arne Slot, […]