In this tactical analysis, we shall examine Beijing Guoan’s offensive tactics. In this scout report, we shall delve into how Beijing Guoan dominate in the positional attack in the league.

Beijing Guoan utilise a 1-4-3-1-2 offensive system. Usually, they keep a narrow four in the midfield, forming a boxed shape, which will be detailed in the next section in this analysis.

However, different players might bring a bit of different tactics on the pitch. For example, former Leverkusen player Renato Augusto could use his mobility to occupy the width in the midfield/ front-line.

The frequent starting-eleven is manifested below: 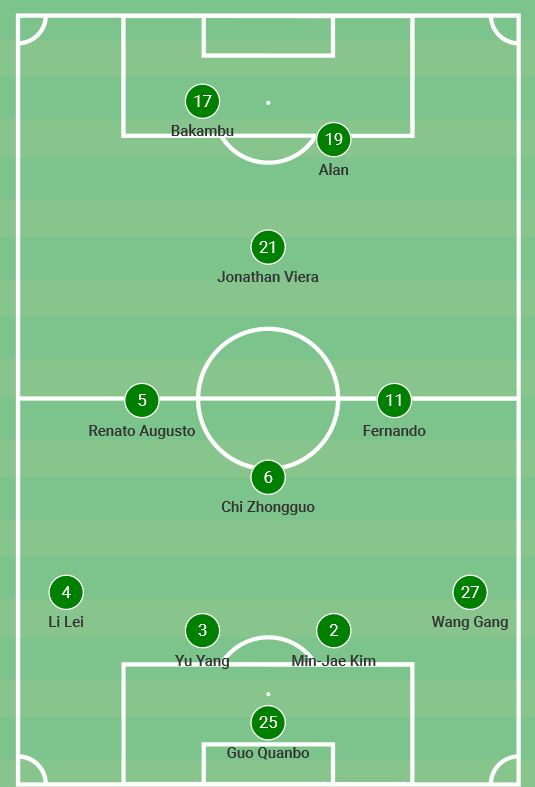 Bakambu and Alan would pair up as the front-two, while Zhang Yuning would replace Alan from time to time. Former La Liga player Jonathan Viera is deployed as the number ten. Three midfielders would be Renato Augusto, Fernando and Chi Zhongguo. Zhang Xizhe and Nico Yennaris would also play in the midfield in the match. The back four are rather stable: Li Lei, Yu Yang, Min Jae Kim and Wang Gang. Guo Quanbo is the goalkeeper.

For Guoan, they intend to develop the play through the centre. Thus, one of their principles of play is to create density in the central spaces, which leads to the boxed shape of their midfielders. They would have two pivots to support the defensive line and two in front as options to develop central plays.

In the building-up stage, Beijing Guoan’s main objective is to find the two pivots in the centre, who can face forwards and link the play to the next stage.

As most of the teams in Chinese Super League don’t apply much pressure in the high block, and their pressings are not very well-structured, it is sometimes not hard to find pivots who can face forwards in the centre. The pivot could be picked with an easy forward pass from the centre-backs and turns to face forwards. Nevertheless, some big teams like Shanghai SIPG and Guangzhou Evergrande would apply structural pressing in the front and easy pass to find the pivots is not available. On this occasion, Guoan would use the third man to activate the status of pivot receiving the ball facing forwards. This third man could come from two sources: 1. The midfielders in front (mostly Viera) would drop to play one touch pass to pivot, letting the pivot receive facing forwards; 2. Two pivots would occupy different horizontal and vertical zones. The one that stays relatively higher would face backwards and serve as an activator to the other pivot receiving facing forwards. The pivot who stays higher could potentially pin the opponent’s midfield line and create more space for the other pivot to operate.

This kind of approach was built upon the passing and press-resistant ability of the players.  Guoan’s players’ passing ability are quite fine, though sometimes their pivot Chi Zhongguo might have some meaningless errant passes without pressure. But speaking of the passing ability, the Korean centre-back Kim Min-Jae’s ball-playing ability is excellent. Apart from the classic finding the central pivots approach, Guoan could also directly pick the former LaLiga striker Bakambu from the centre-back, Kim, due to his passing ability, and their connection would result in a direct finishing opportunity. As Bakambu is a well-timed in-behind runner/ line-stretcher, and Kim could directly release through passes into the space behind the opponent’s defensive line to set up Bakambu to finish. 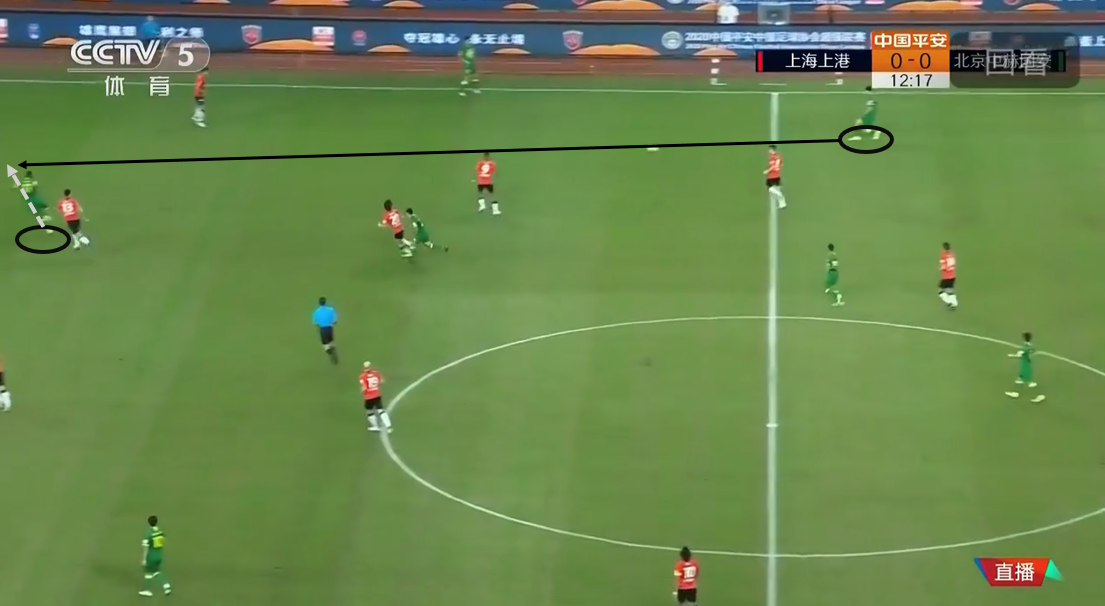 Above is a manifestation of the link between Kim and Bakambu. Kim was picked and he had a good habit of opening his body without touching the ball in open spaces. This enabled him to face forwards quicker. Then he touched his first touch as an accurate penetrative pass to Bakambu who ran in behind the space. Though Bakambu didn’t have a direct finishing chance on this occasion but he could create chances later.

Apart from using the centre to start the attack, if the central spaces are closed and restricted, a simple pass from the centre-backs to side-backs would take place. On this occasion, the side-back would pick the striker (especially Zhang Yuning and Alan) who is moving to the flank to receive, whilst the following actions will vary according to the personnel deployed on the pitch. We will discuss more this pattern in the coming section.

As we’ve mentioned in the above section, Guoan tended to utilise the centre of the pitch. Thus, in this phase, the main objective is to create opportunities for final passes in the centre. To achieve this, Guoan replied on finding their skilful playmaker Viera to utilise his techniques to bring the play into the final passes stage.

Viera is a skilful player with great techniques in turning to escape the opponent and facing forwards and dribbling with physical contact to take on the opponent and progress the play. He could dribble into a final pass position and then release the final pass in the centre.

As you can see from the above image, Guoan utilised a boxed shape to control the centre. The pivot Renato Augusto possessing the ball facing forwards served as the trigger to find the midfielders in the next line. Viera positioned himself in the half-space in an opening with a close body shape. However, as the former Leverkusen player Augusto released the ball to find him, he still managed to turn and escaped his marker with his first touch. Then he dribbled at the defence and reached a position that was suitable for giving the final passes.

Thus, the main way to create final passes for Guoan was Viera carrying himself to get into a final passes spot, which is supported by Viera’s dribbling (5.43 per 90, 59.09% in success rate) and turning skills. Apart from taking advantage of the individuality of Viera, Viera could also dictate the play to pick full-backs on the flank to cross, or if he is between lines, he might directly give the final pass like a modern number 10 (key passes 0.81 per 90, the highest in Guoan).

On top of this, other midfield players have their scintillating points and bring variation in this phase of play. For instance, if Augusto is deployed as the left/right midfielder in this 1-4-3-1-2 system, his mobility will be of great use to get himself ready in a final passes position. Normally, he would seize the right time to run in behind the defensive line from deep on the flank/ half-space. This is hard to defend as it would lead to the confusion of the marking responsibility between the opponent’s winger and full-back. 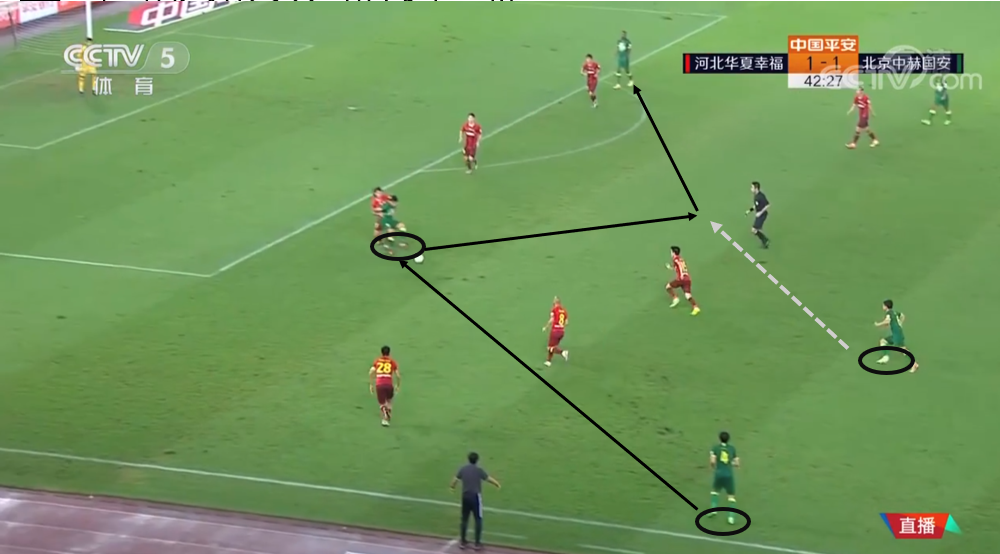 As you can see from above, Viera was dictating the play in front of the opponent’s midfield line. He faced forwards and ready to play forwards. That was when Augusto ran from deep on the half-space to attack the space behind. It was hard for the opponent to defend as the left-back was pinned by Bakambu and the left-winger was slow in deciding to track or not. Thus, Viera picked Augusto who got himself in a crossing position, ready to give the final cross on the opening right flank.

The mobility of Augusto supports this kind of runs which can catch the opponents in surprise. This kind of run offers an additional option to bring the play into the final stages. Apart from Augusto’s mobile runs, his Brazilian fellow Fernando also affects this stage with his vision and accurate long pass (6.33 per 90, accuracy 74.09%, both the highest in Guoan) to switch the play. He would usually receive the ball in this stage facing forwards near one side, and then played the ball to the weak side, finding the full-back/ striker who moves out wide (Zhang Yuning). This kind of long passes to the weak side could create some 1v1 scenarios or unmarked to cross scenarios. As the weak side has more openings, normally the crosser would have more time and space to deliver crosses of higher quality.

While the above patterns are more related to the use of the centre, let’s not forget there are also attacks developed in the flank from the back. After the centre-back picking the side-back, the next move is to find Zhang Yuning who is holding up the defender and receiving with his back to the goal. He is strong in physique and possesses decent strength to hold up the defender, waiting for his teammates to show up between the lines in central spaces. Then he will activate the final-passer with his next pass, where the final passer could face forwards and available to give the final pass. This pattern doesn’t occur very often but very effective in finding the attacking midfielder Viera in the centre. And this pattern could save Viera some stamina as he doesn’t need to carry the ball in an exhaustive way, but focus on giving final passes of great quality.

The above image is an example of this pattern. Li Lei, the left-back had the ball on the left flank. He then passed diagonally to Zhang Yuning who was holding up his matchup in the half-space. Then, on this occasion, the final passer rotated and Chi Zhongguo was the receiver for Zhang. Then Zhang held the ball, waiting for Chi to join the attack and picked his right foot. Chi then passed to the in-behind runner Bakambu who could finish, though Chi’s pass was not of high quality: bouncy and to the back foot of Bakambu.

As Guoan’s midfielders and attackers possess various traits, there are other patterns like Kim the centre-back picking Zhang in the centre, who later held up the play and activated the final passer Viera. We couldn’t cover it all in this section due to the word limitation. However, the patterns we manifest above are the most common ones.

Final stages encompass the final pass and finishing. As we mentioned in the above sections, Guoan desired to develop the play in the centre. And they want to create chances via key passes in the centre, though crosses are also implemented but as a suboptimal option. Viera is the key player in the centre to give final passes, and Bakambu would be his pick. During the regular season, Bakambu’s xG was 8 and he scored 11, which means that he scored more than expected. Furthermore, his goal conversion was 34.375% and shot on target rate was 56.25%. Together these metrics make him a reasonably effective finisher.

Apart from giving final passes, Viera’s dribble could also force the opponents to commit fouls in some dangerous area.

There are also crosses on the flank to create chances. However, these crosses are not very effective as you can see from the below image. 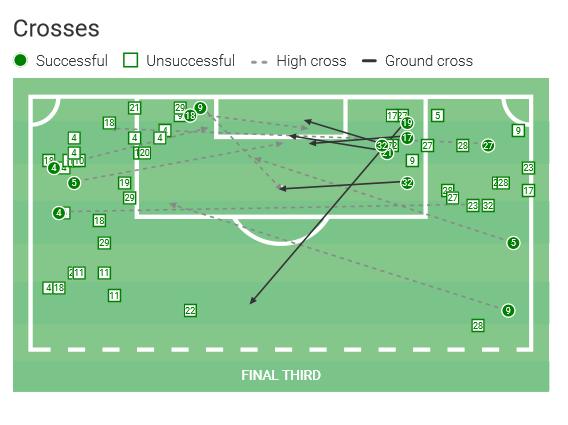 Wang Gang, the right-back, his accuracy of crosses is poor with only 12%. The left-back Li Lei’s is better (28.89%). But the crosses from the flank are not effective enough to create chances in general.

Though Beijing Guoan didn’t make it into the league final, their positional attack is stunning in Chinese Super League. As the league almost comes to an end, we shall expect their performance in the next season.