Before we show you Harshal’s solution, let’s remind ourselves of the challenge he was posed.

It is January 2021, and your club is set to play against Jurgen Klopp’s Liverpool. The Reds are still the talented counter-pressing side that they are today, and your side needs a win.

January 2021 sees my team face the challenge of facing Liverpool, who have by now established themselves as the best side in the world, heading for another Premier League title and in the latter stages of the Champions League as well. With the tie set to occur towards the end of the month, my club has been able to splurge and bring in some of the best young talent in the world, along with the experienced hands already at the club, to give us the best chance of getting past the Reds. After hours of analysis, this is the side and tactics I have come up with to beat Liverpool and secure a famous win for our nascent club.

Liverpool are expected to line up in their standard 4-3-3, with the same core of players who have helped them dominate English and European football over the last couple of years.

I would send out my side in a 3-4-1-2 shape, with the notable inclusions being that of Hannes Wolf as the attacking midfielder, Jadon Sancho and Marcus Rashford as twin split strikers. Kevin De Bruyne in a free midfield role where he would be encouraged to get into space between the lines on either flank, as we will show later in this piece. The aim would be to employ a direct, quick counter-attacking system to exploit Liverpool’s high defensive line, and their tendency to push both full-backs forward when in possession.

As stated earlier, my team will aim to play on the counter-attack, hence Liverpool are expected to dominate possession. This would need my players to be extremely disciplined and carry out their roles to perfection in order to deny Liverpool’s fantastic attackers any chances on goal. We will not attempt to press high, settling into a mid-to-low block, and only pressing specific players when certain scenarios arise.

My side’s main aim will be to match Liverpool numerically across the pitch, as the image shows. The Reds tend to push both Robertson and Alexander-Arnold high up the pitch, with Salah and Mane coming inside to facilitate this and combine with Firmino. My back three, plus my wing-backs, will look to create 1v1s with the Liverpool front five, while the two central midfielders, Valverde and De Bruyne, will pick up Liverpool’s midfield two. Wolf will drop deep and mark Fabinho to try and prevent Liverpool from building through him, while Sancho and Rashford will stay relatively high and wide to allow us to create counter-attacking opportunities when we win back possession. This is a risky strategy, one which will need the remaining members of the side to perform their defensive duties perfectly, but the players I have selected have shown that they are up to this task.

One of Liverpool’s favoured methods of build-up is to get Alexander-Arnold on the ball and have him play passes out to Robertson on the opposite flank, or even to Salah or Firmino to create quick attacks –

In such a scenario, Rashford will look to press the Liverpool right-back, while Wolf will once again drop in on Fabinho to cut out the simple pass. Hakimi, on the near side, will look to cover any passes to Salah, while Varane, the central defender in my trio, will get tight to Firmino. Bastoni, the left-sided centre-back, will have to drop deeper to cover for Varane, while De Ligt will look to cover Mane. On the far side, Sancho is expected to track Robertson, with James’ also staying in position to cut out passes towards the left-back. Valverde will cover the potential passing lane from Salah to Firmino, while also picking up Henderson. De Bruyne has a dual role – if the pass is played to Firmino, he will look to get back and provide defensive cover, while if Alexander-Arnold shapes to play the ball to Wijnaldum, who is deeper and unmarked, the Belgian is expected to charge upfield and challenge him for possession. 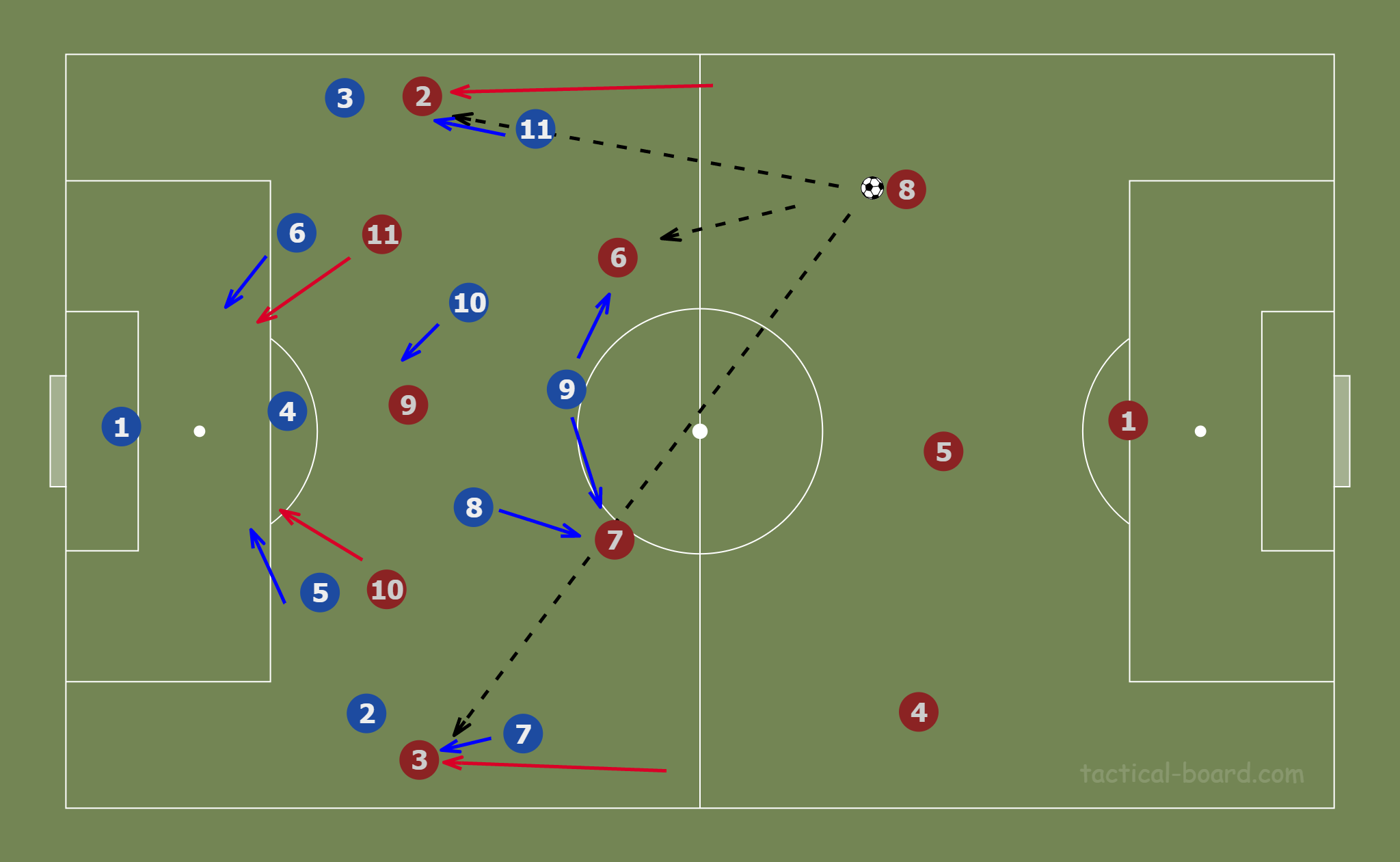 Here, we see that Henderson has moved into a right-sided position deep in Liverpool’s half, creating a back three and allowing the full-backs to push on. In such a scenario, both of my split strikers would retreat, tracking the Liverpool full-backs. Wolf and De Bruyne will pick up the Liverpool central midfielders, with Valverde sweeping up between the midfield and defensive lines and covering any space that Firmino might look to play in. Bastoni and De Ligt will track Salah and Mane respectively, while Varane can either step out to tackle Firmino, or stay deep and deny the Liverpool wingers space in the box.

Liverpool will try to work the ball down the flanks, due to our strategy of denying them space centrally – 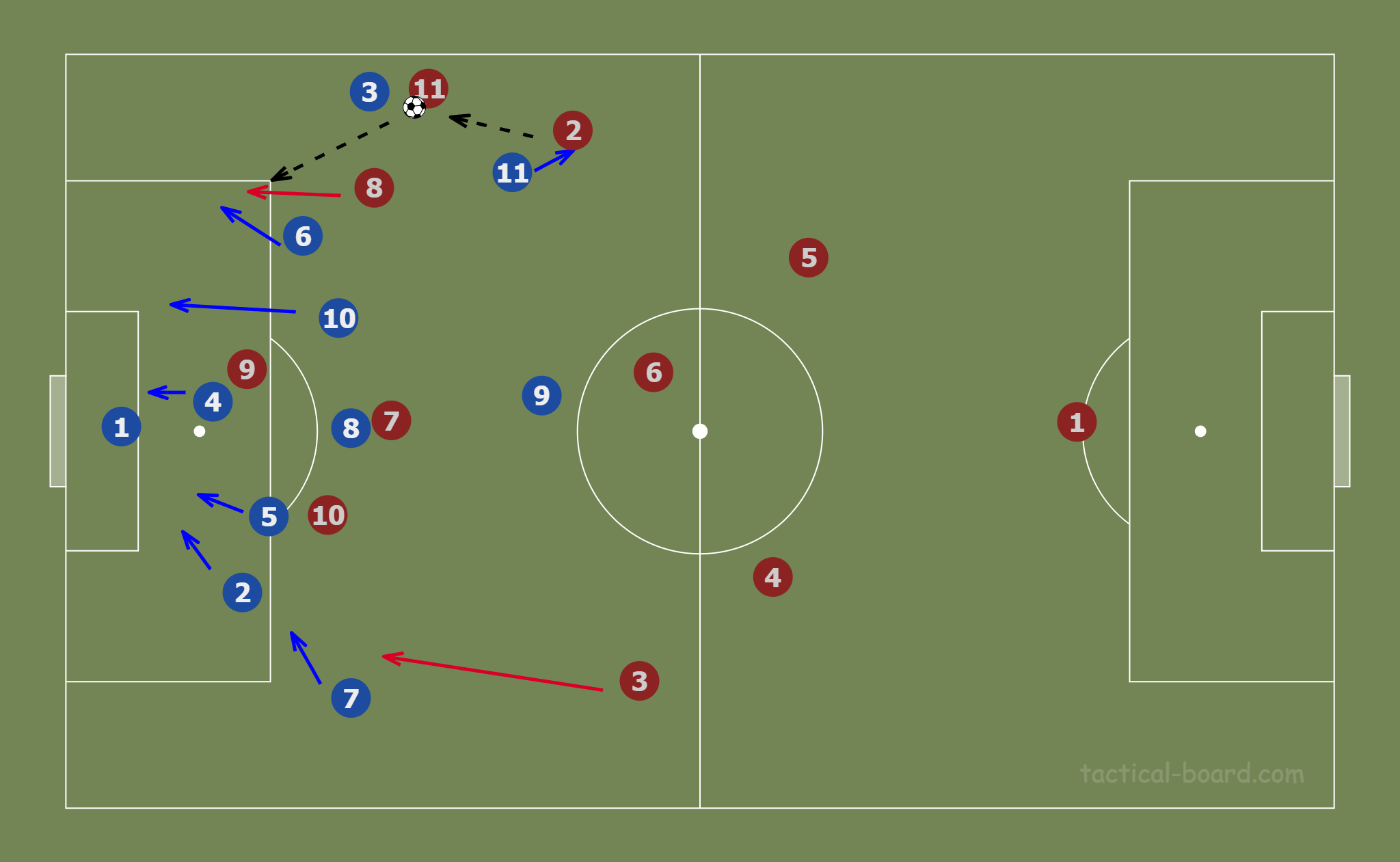 Here, Salah is wide on the right, with Alexander-Arnold in support and Henderson looking to make a run into the box. Rashford will press Alexander-Arnold, while Hakimi attempts to win the ball from Salah, and Bastoni will pick up the run by Henderson. Valverde will drop into the box to cover Bastoni’s position, while also looking to guard against low crosses and cut-backs if Henderson does manage to get into a crossing position. Varane, De Ligt, and James all drop into the box, with Sancho also dropping deep in case Robertson makes a late run. This would be mirrored and replicated on the opposite flank if Liverpool try to attack down their left.

Upon winning the ball back, my team will immediately look to get Rashford and Sancho on the outside of the Liverpool centre-backs to draw them out into wider areas where they are uncomfortable defending one-on-one, while also looking to get De Bruyne into space to allow him to play quick, direct passes towards my pacey front two – 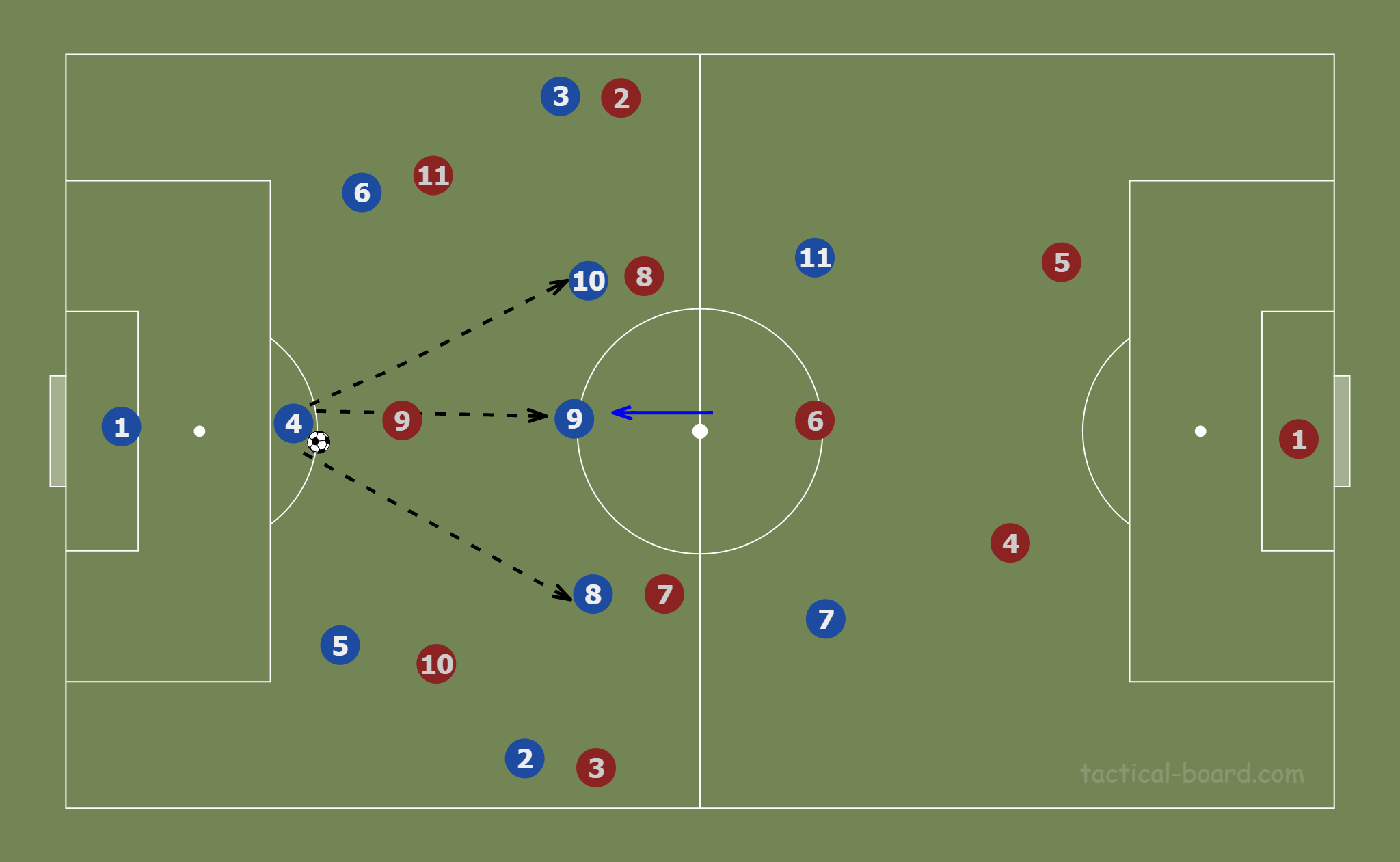 Here, as Liverpool begin to press high up the pitch, De Bruyne and Valverde will try to find space away from the Liverpool central midfielders. Wolf, who is playing as a ‘false nine’ of sorts, will also drop deep, to give the centre-backs the option of playing a pass over Firmino to him. 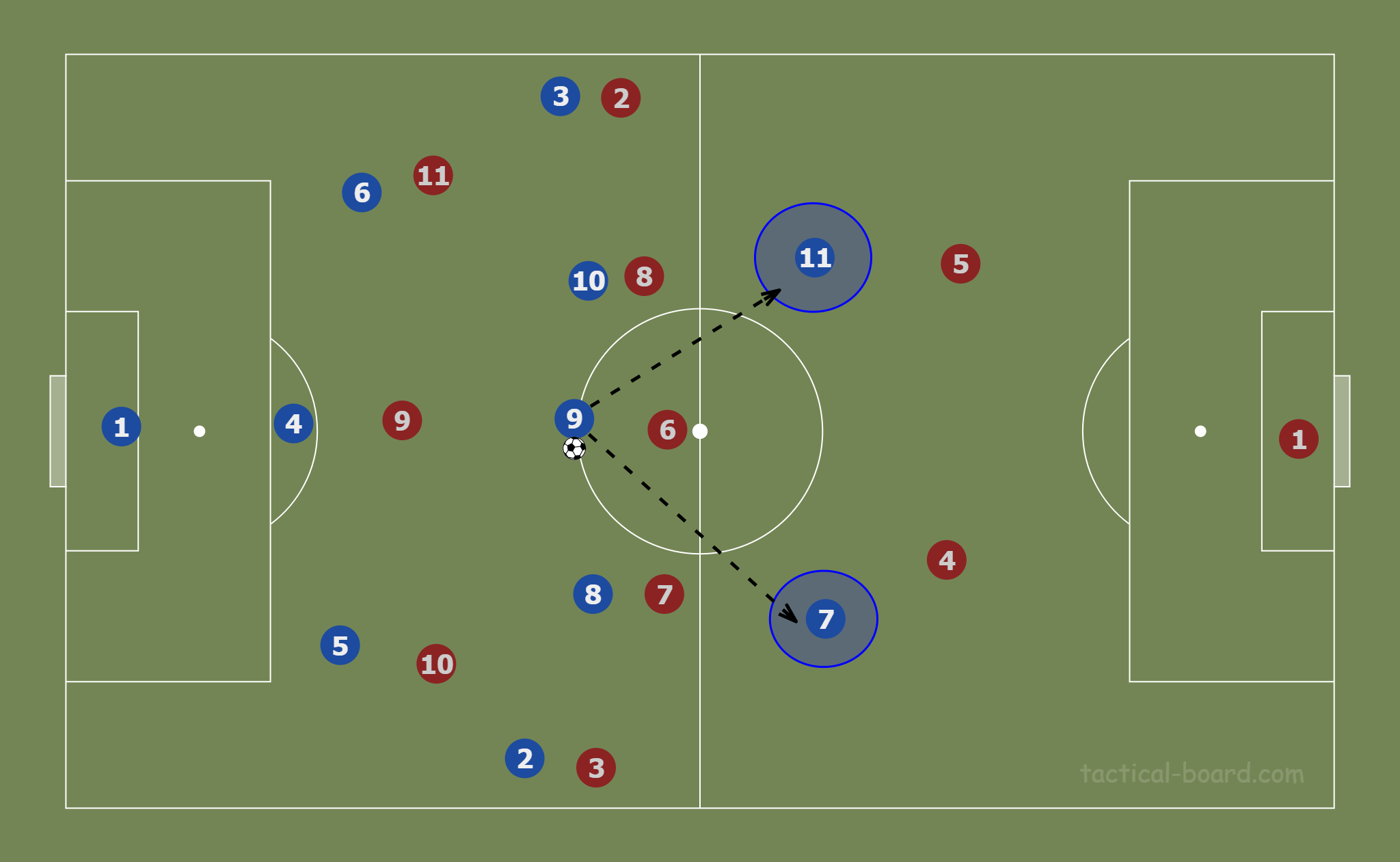 If Wolf does manage to pick the ball up in midfield, Sancho and Rashford will look to get Van Dijk and Gomes isolated and 1v1 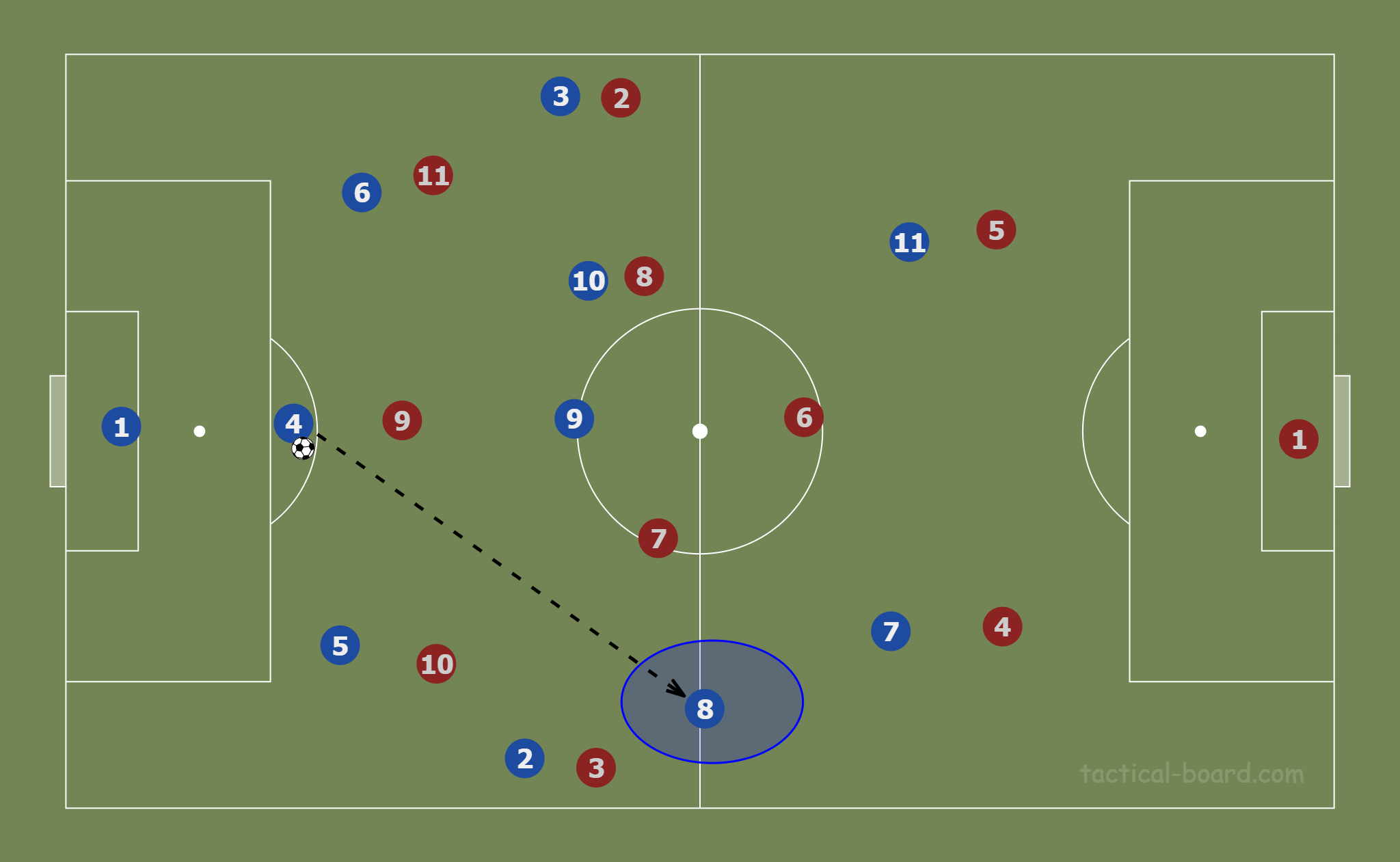 Of course, another important move is to try and get De Bruyne into space on the right flank, like the above scenario. Of course, Liverpool will be aware of his quality, and so may get Wijnaldum to move out and mark him – 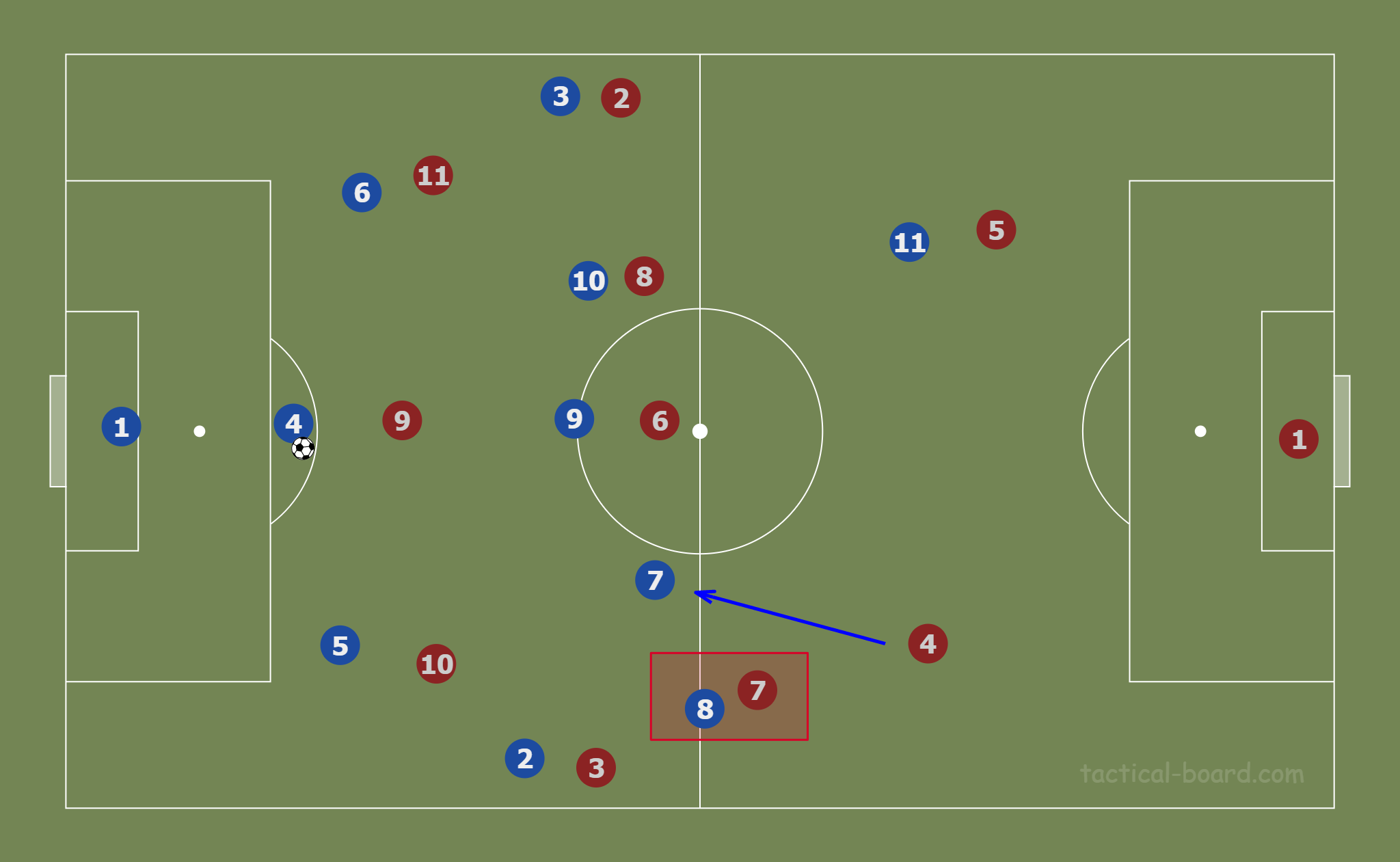 In such a scenario, Sancho will come extremely short, into the space opened up by De Bruyne and Wijnaldum’s movement out wide. This will either force Van Dijk to follow him and leave a lot space in behind for Rashford, or let him go and thus give him the space to turn and run at the defence or combine with Wolf and De Bruyne before releasing Rashford.

If my side is unable to break quickly, and Liverpool are able to reset and settle into their defensive shape, we possess enough quality on the ball to attempt to break Liverpool down with quick combination play down the flanks – 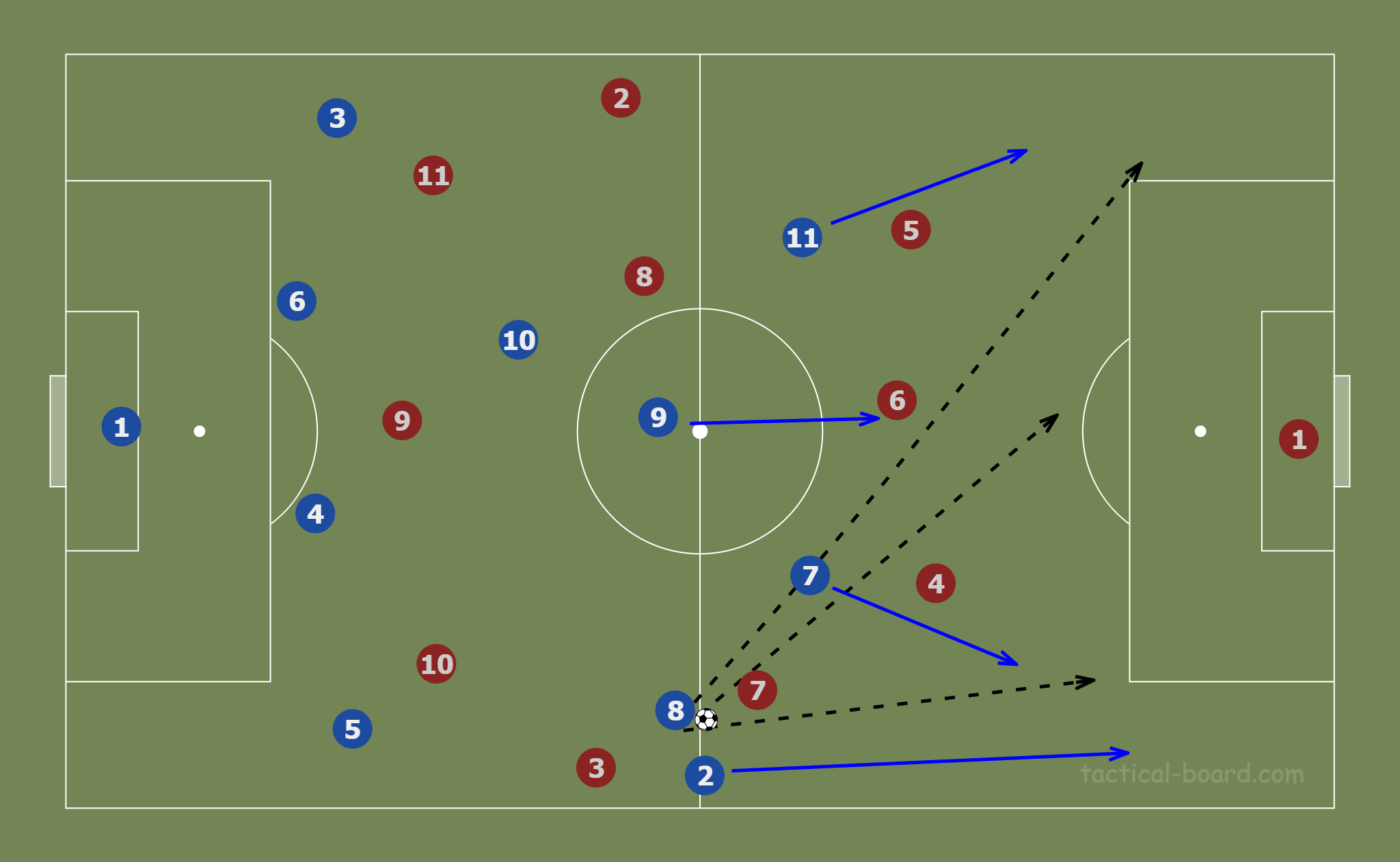 Once again, the primary aim will be to try and get De Bruyne on the ball on the right flank. Valverde will stay deep and operate as the single pivot, while Wolf will make a run from his deeper position to try and catch out Fabinho. James will look to get upfield on the overlap, with Sancho and Rashford looking to get on the outside of their respective centre-backs. All of these runs will give De Bruyne plenty of options to play accurate, direct passes towards his teammates. 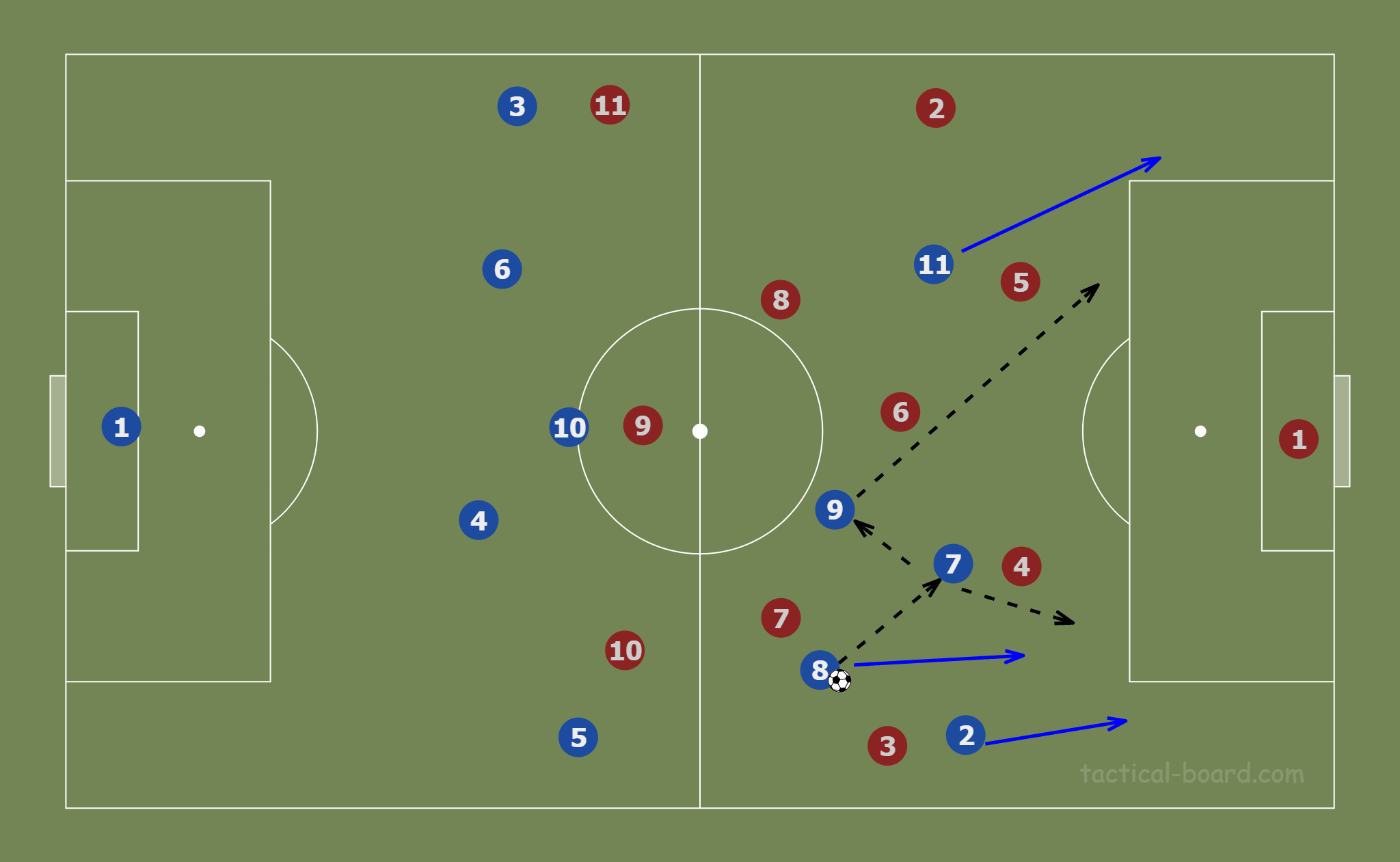 Another option for my side when De Bruyne has the ball is to have Sancho come short to create space for James on the overlap, while also giving the Belgian the option to play a quick one-two with the Englishman and charge into the box himself. Alternatively, Sancho can play the ball back to Wolf, who could spread the play out to Rashford on the left, with De Bruyne and Sancho making runs into the box to get on the end of any crosses.

De Bruyne has been given a free role in attack, with the freedom to go out to the left flank too if he is marked out of the game on the right, or to keep Liverpool’s midfielders guessing – 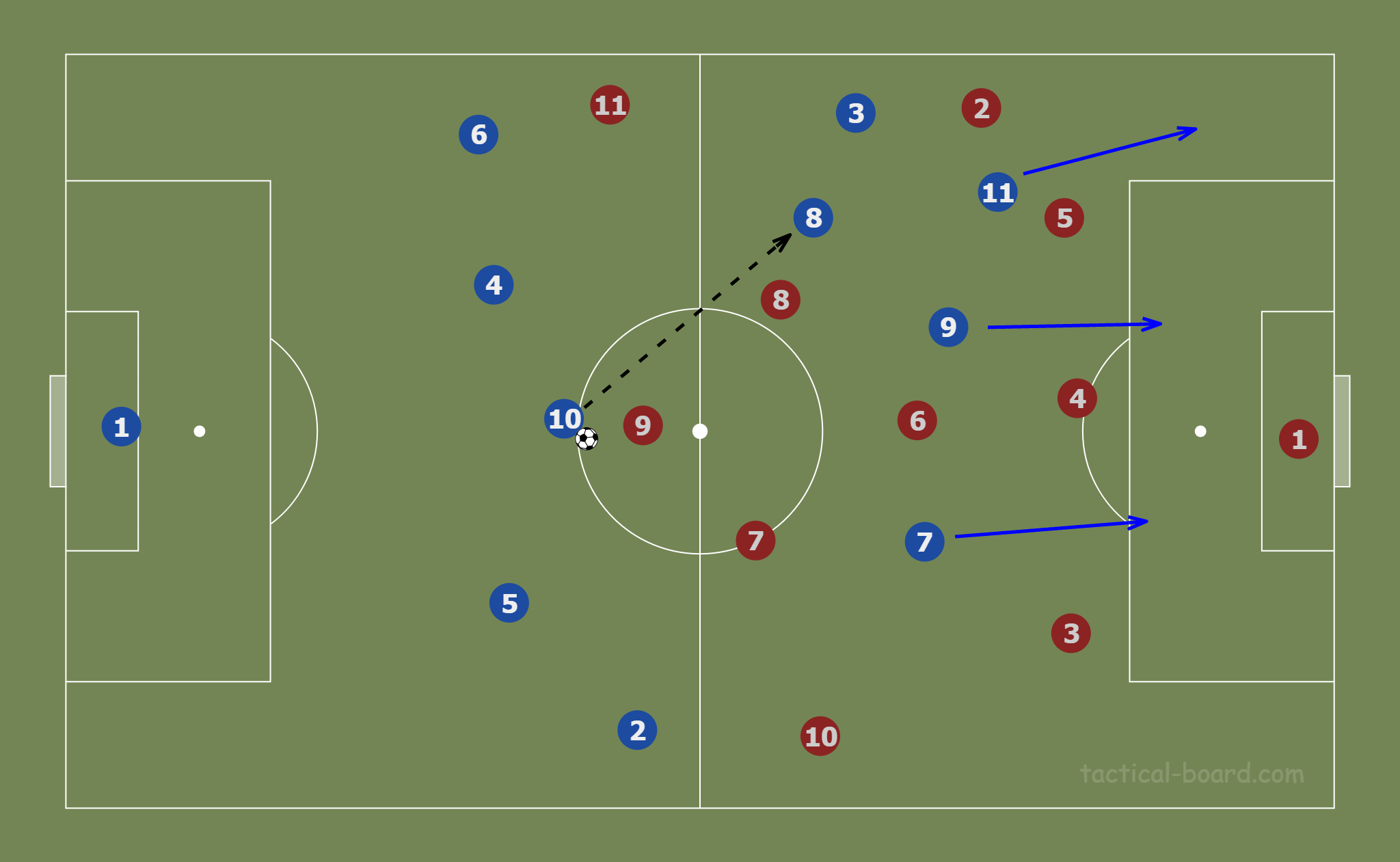 Valverde can pick the ball up in a deep position and try and find De Bruyne on the left. With Wolf, Sancho and Rashford all looking to make runs into the box, and Hakimi offering support on the left-wing, De Bruyne once again has a plethora of options to pick out a teammate in a dangerous position.

So there you have it, this is my solution to beating Liverpool with a team of U-21 players. While this system will need a lot of defensive diligence and concentration, the squad I have picked has shown itself to be mentally strong, with their ability on the counter-attack sure to cause Liverpool problems at the back as well.