Before we show you Harshal’s solution, let’s remind ourselves of the challenge he was posed.

Check out the thread below to find out what challenge our analysts face this week!

With a bumper UEFA Champions League tie against French heavyweights Paris Saint-Germain (PSG) coming up, my team has been hamstrung by having most of the first-team squad being sold during the January window. We have been only allowed to sign players over the age of 32 as replacements, to aid and reinforce the remaining first-team players at the club. Having brought in some quality replacements, we go into this tie having honed our tactics on the training field, and with our analysis having given us the optimal tactical system to get past Thomas Tuchel’s PSG side.

We’re assuming that PSG line up in their standard 4-3-3, with Mauro Icardi as the central striker over Edinson Cavani.

My setup would be in a 4-4-1-1 shape, with James Milner being tasked with playing a defensive winger role on the left, while Kevin De Bruyne is given a lot more license on the opposite flank. David Silva plays as the number 10, looking to link up with De Bruyne and Luka Modric, with Cristiano Ronaldo leading the line. 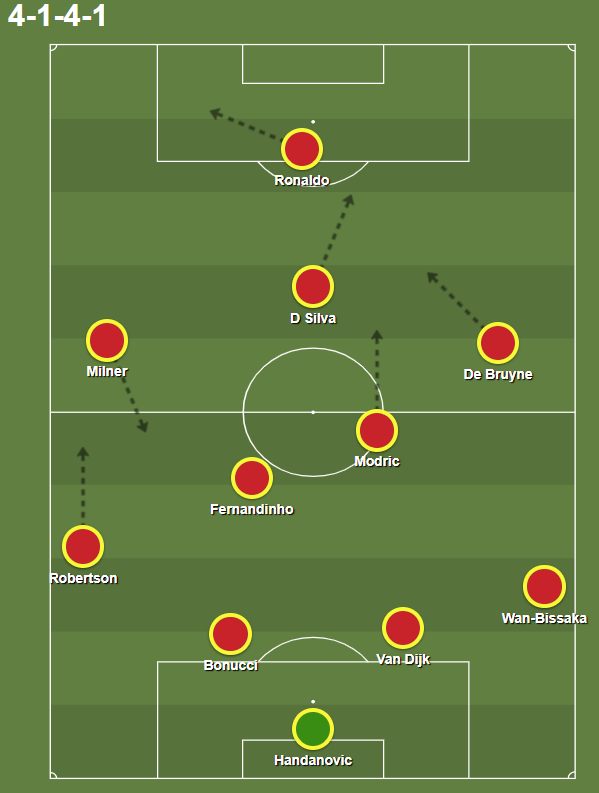 The aim of this shape is to try and deny Kylian Mbappe and Neymar space and time on the ball. With Neymar’s tendency to come inside from the left, along with Mbappe’s blistering speed in behind, the full-backs’ roles will be extremely important. They have been asked to mark the wide players tightly, thus making the back four quite narrow. De Bruyne and James Milner are expected to shuttle out and pick up the PSG full-backs when they advance up the field, with Milner also being asked to press the PSG right-sided midfielder (most likely Idrissa Gueye) depending on where the ball is and Andy Robertson’s positioning. 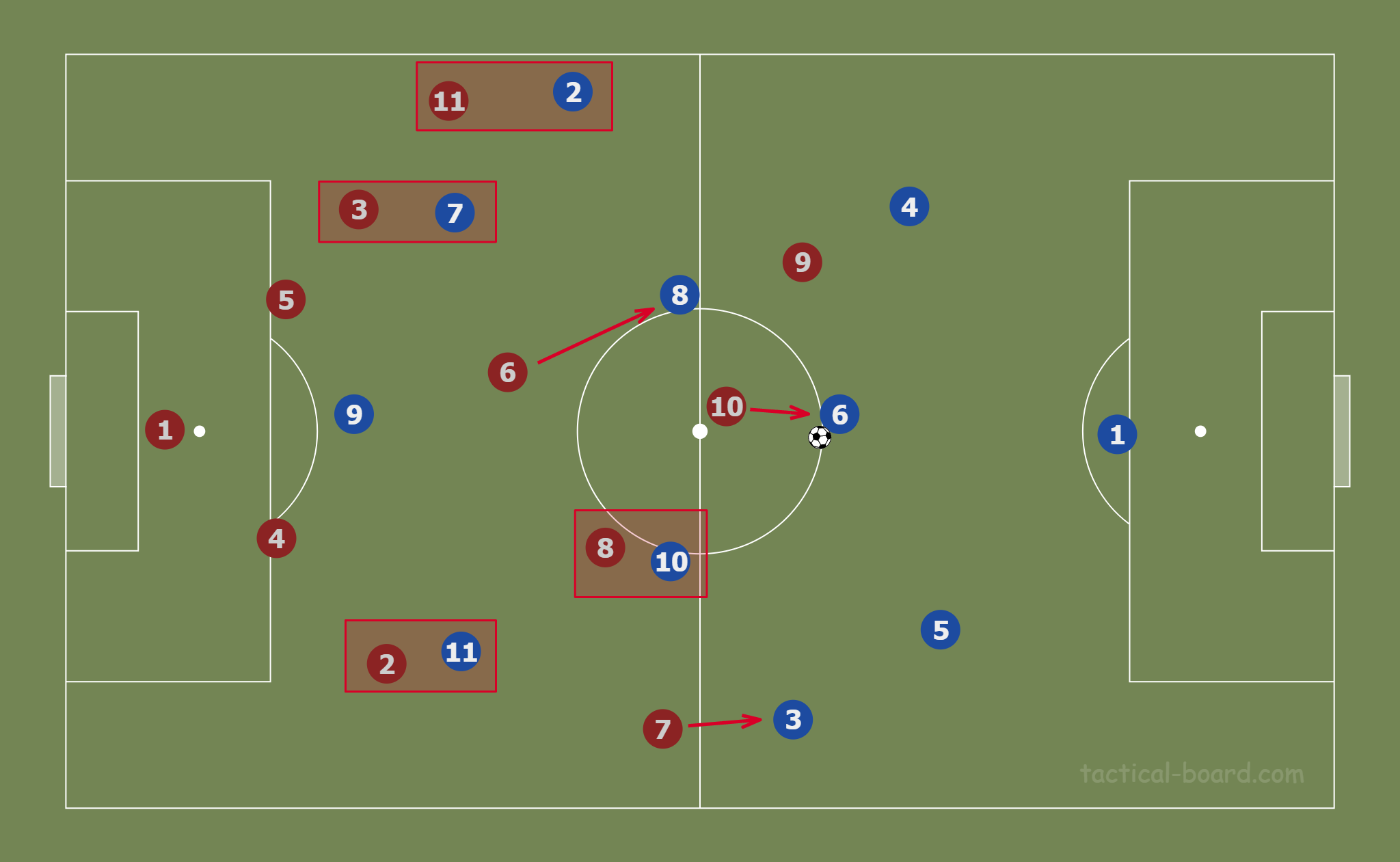 PSG often look to their full-backs to provide width, with both wide forwards coming inside. They usually do so down their right flank, where Thomas Meunier acts as an ersatz winger, while Juan Bernat tucks in to maintain numbers at the back. In such a scenario, with PSG building up through Marquinhos, Robertson will mark Mbappe tightly, while Aaron Wan-Bissaka does the same job on Neymar on the opposite flank. Milner’s job is to pick up Meunier, to prevent an easy pass out to the flank, while De Bruyne will advance on Bernat if he looks to burst upfield. Modric has to keep a close watch on Marco Verratti, as he is the creative fulcrum of the PSG midfield, while Silva presses Marquinhos and Fernandinho will press Gueye if the ball is played towards him. Ronaldo is exempt from pressing duties, but he will be asked to take up positions in the left-hand channel, to be able to capitalize on counter-attacking opportunities. 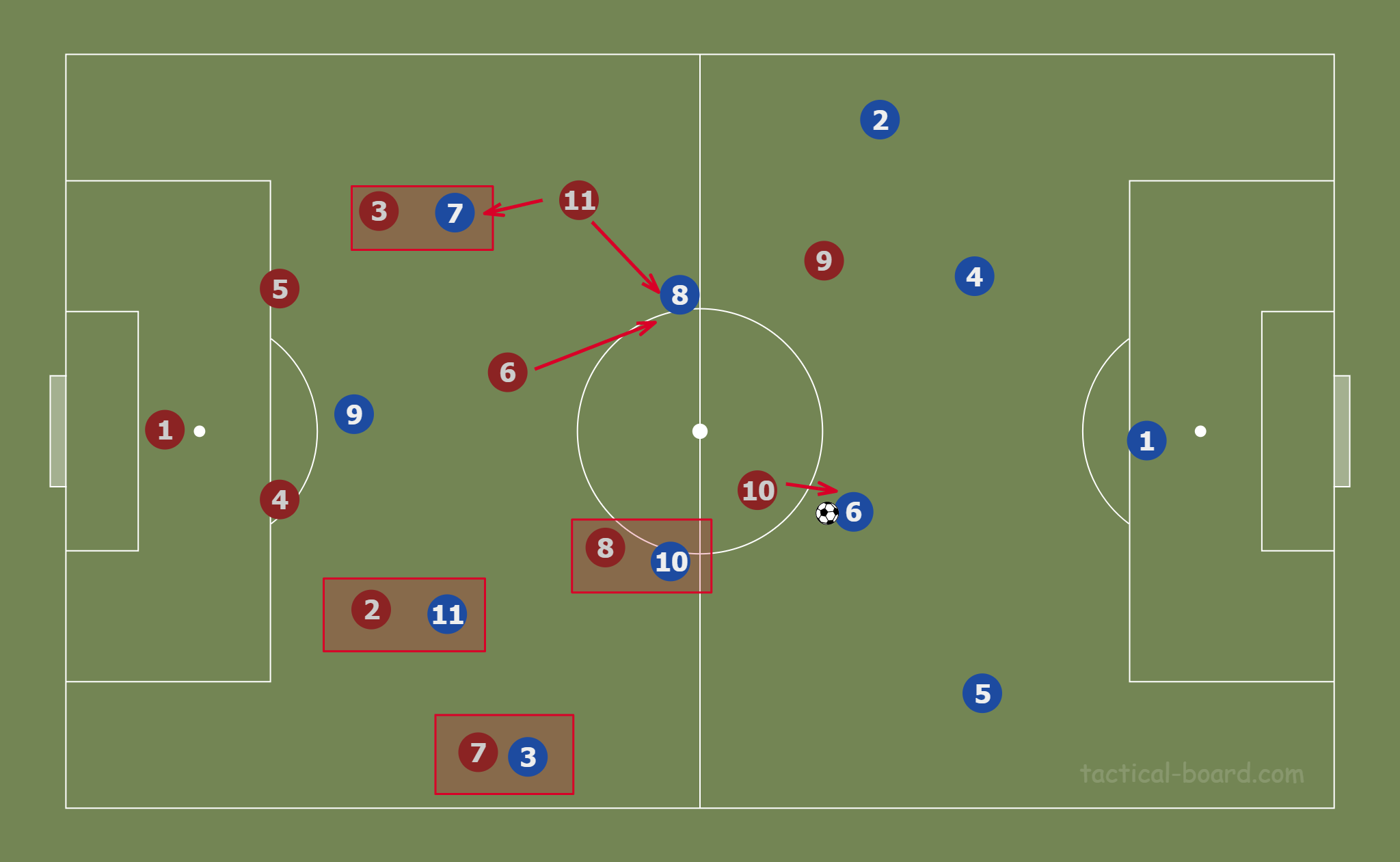 On the occasion that PSG have Bernat advancing down the left with Meunier staying back, the roles stay mostly the same. This time, De Bruyne tracks the full-back’s run, while Milner stays in an inside-left position of sorts, looking to press Gueye if needed, but also ready to track back and double up on Mbappe with Robertson. 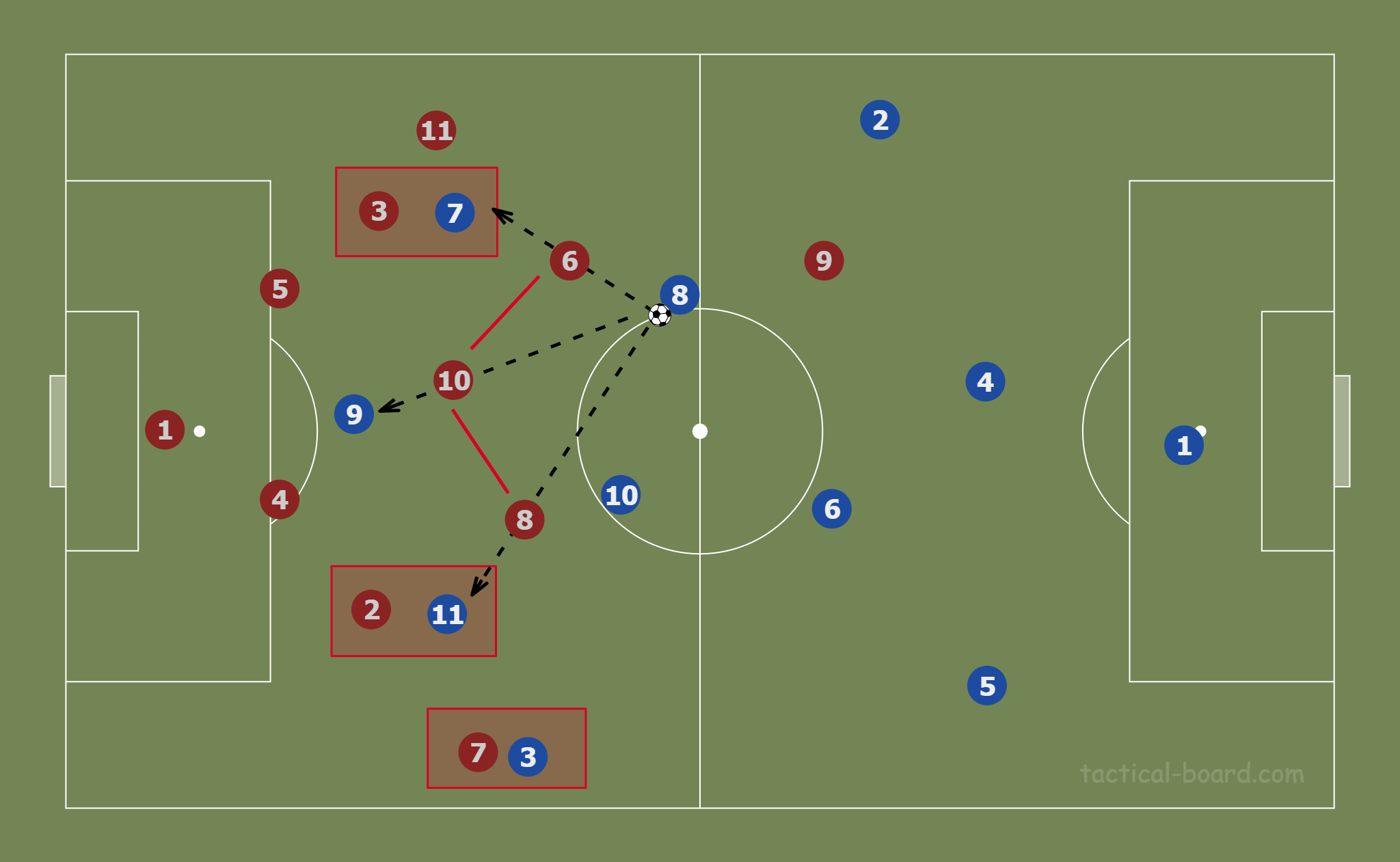 When PSG’s midfielders do get the ball, the job of my midfield will be to drop off and cut off the passing lanes to the forwards. Fernandinho, Silva, and Modric will position themselves in a way such that there are no simple passes available to Mbappe, Icardi, or Neymar in advanced areas. Leonardo Bonucci and Virgil van Dijk will also step up and intercept if passes are played into the space between the midfield and defence.

Upon winning the ball back, the main aim will be to hit the flanks as quickly as possible, to exploit the space behind the PSG full-backs. At the same time, Silva, Modric and De Bruyne will look to get into space between the lines, to allow for quick combinations and thus be able to release one of them, or Ronaldo, in behind PSG’s defensive line. 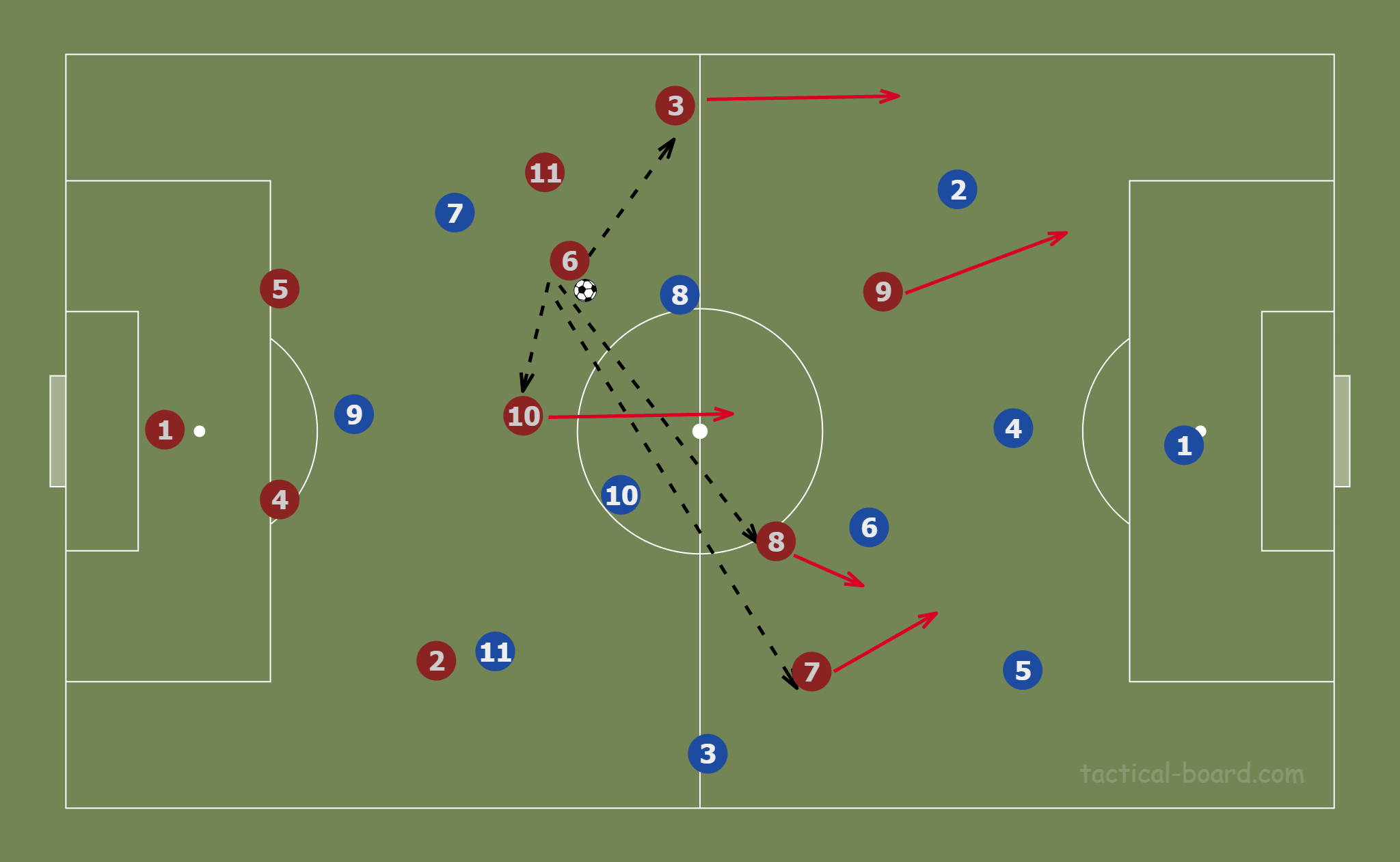 Here, with the ball being won back in midfield, Modric will look to make a run into the inside-right channel with the ball, while if passed to De Bruyne, he will come inside and run directly on goal. Silva will also try and move upfield, with or without the ball, while Robertson will bomb up the flank. Wan-Bissaka will stay back, while Ronaldo will make his trademark run into the left-hand channel. 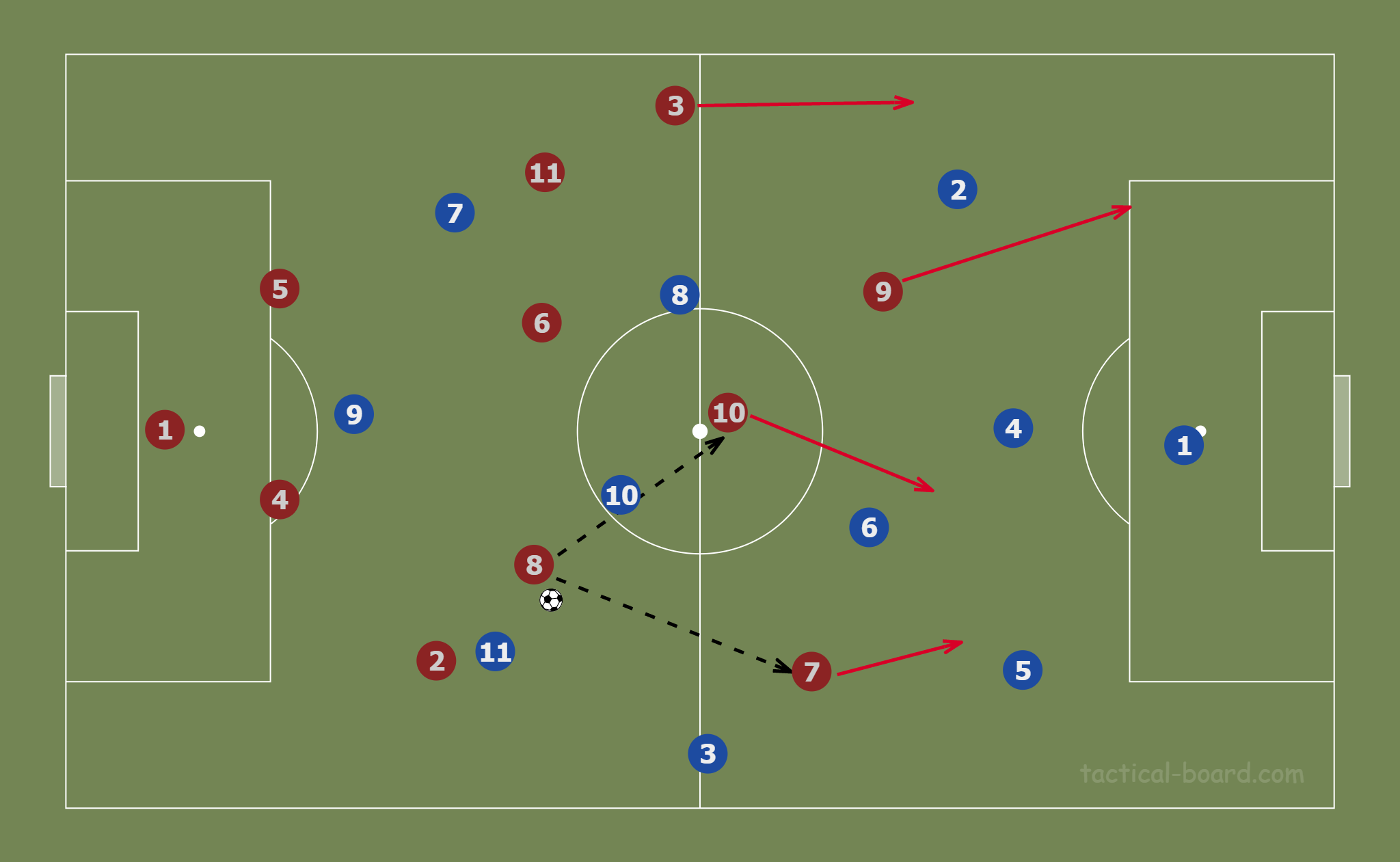 Another option, if the ball is won back by Modric, is to have Silva move into the number 10 space, with De Bruyne in close proximity so that the two of them can play off each other. 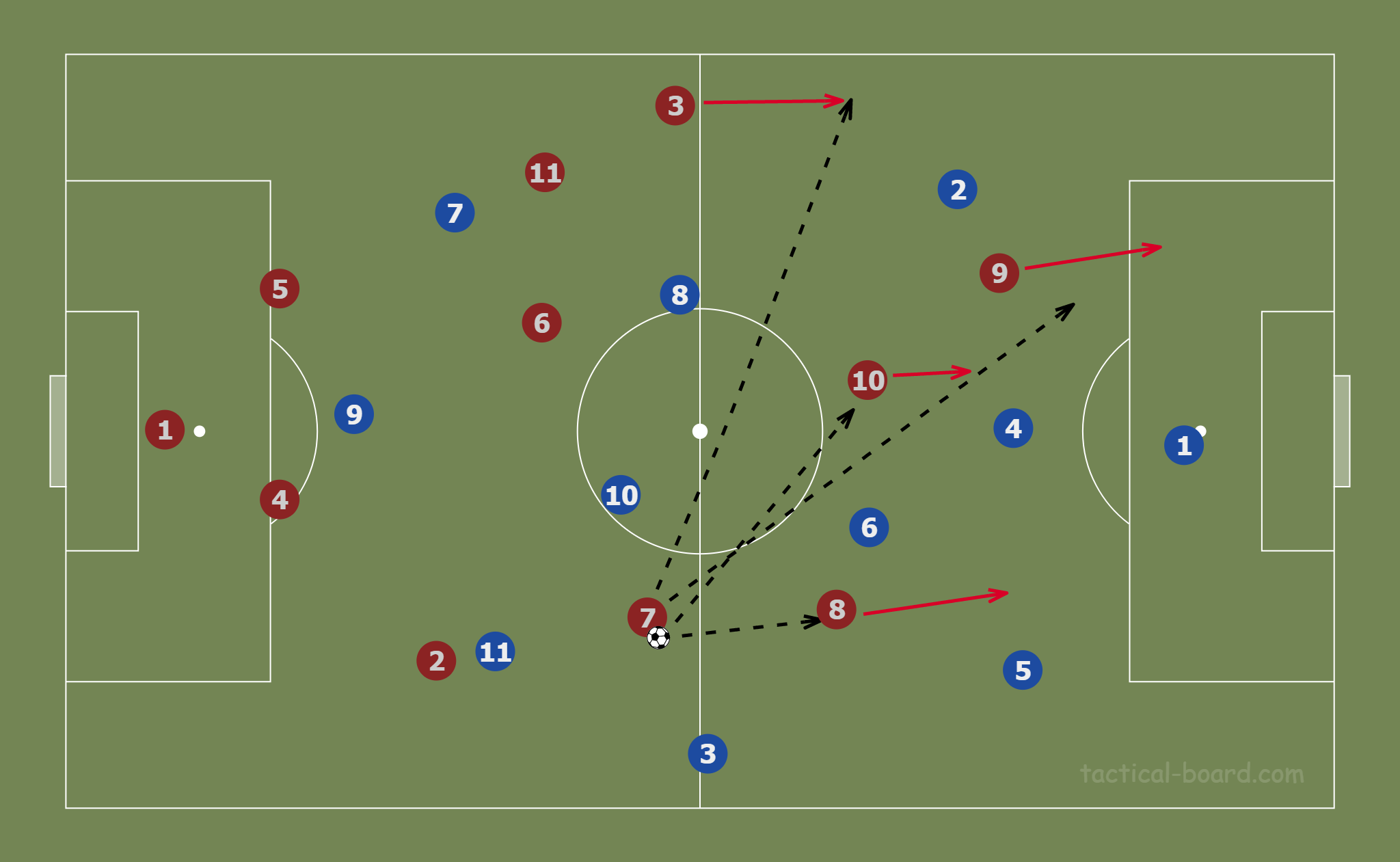 De Bruyne can also drop into a central position on the right, freeing up Modric to go upfield, while almost acting as a quarterback and looking to find Robertson and Ronaldo on the far side. His ability on the ball will make it possible for such passes to be played, while he can also find Silva between the lines, who would then have Modric and Ronaldo on either side to play in on goal.

My team in possession

If our attempts to counter-attack rapidly fail and PSG are able to settle into a solid defensive shape, we will rely on the playmaking ability and close control of Modric, Silva, and De Bruyne to break open the PSG defence. Fernandinho will drop into the defence, with Bonucci moving out to the left, freeing Milner up to go upfield centrally and provide a passing option. However, he will have to be on his toes to race back if possession is lost. 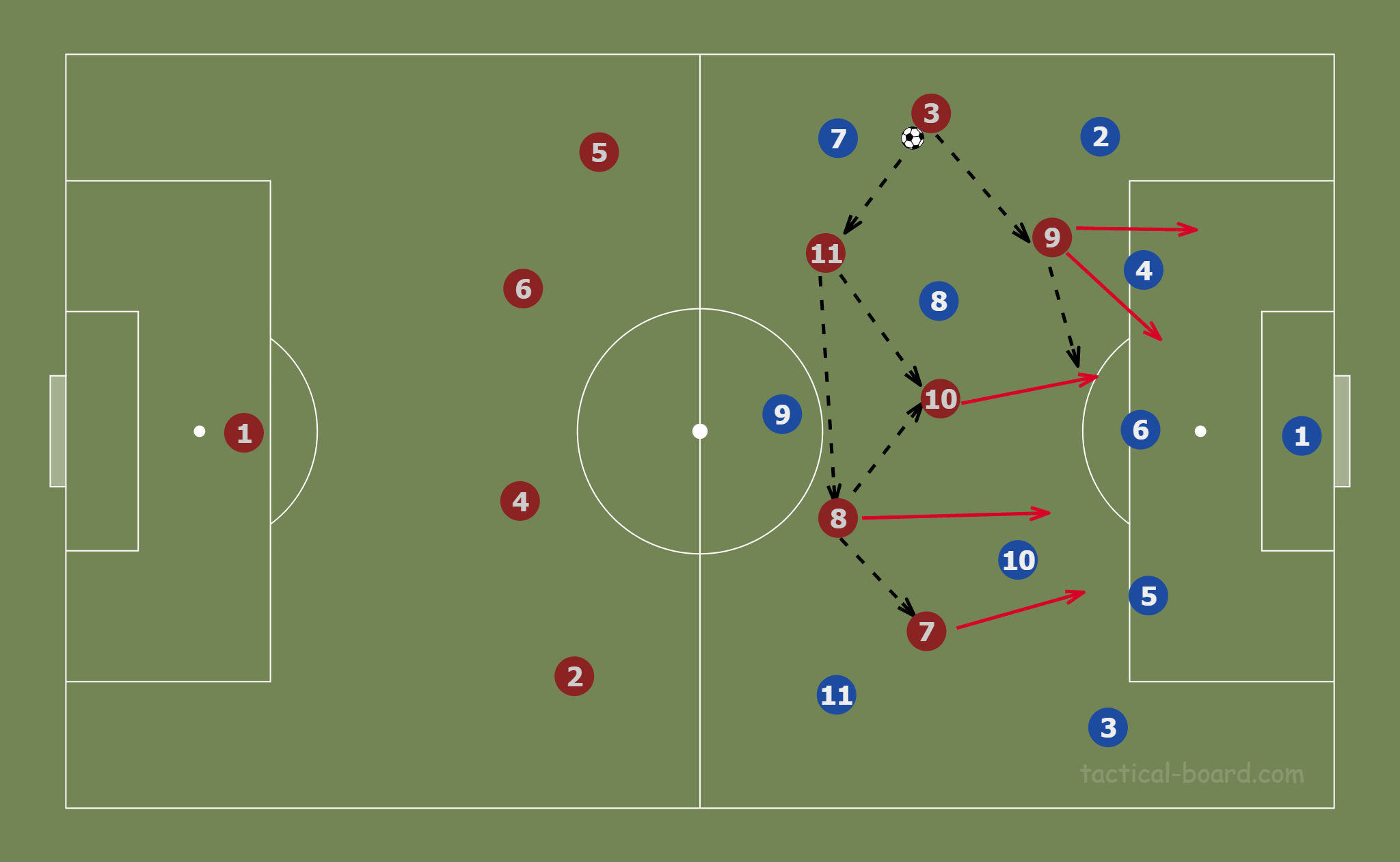 Working the ball to the left, with Robertson having advanced upfield, the team will try to have quick interchanges between the midfielders to release one of them into space. Alternatively, Ronaldo can be used to get in behind PSG, either as a wall-passing option for Modric or Robertson or through his own dribbling ability and pace. 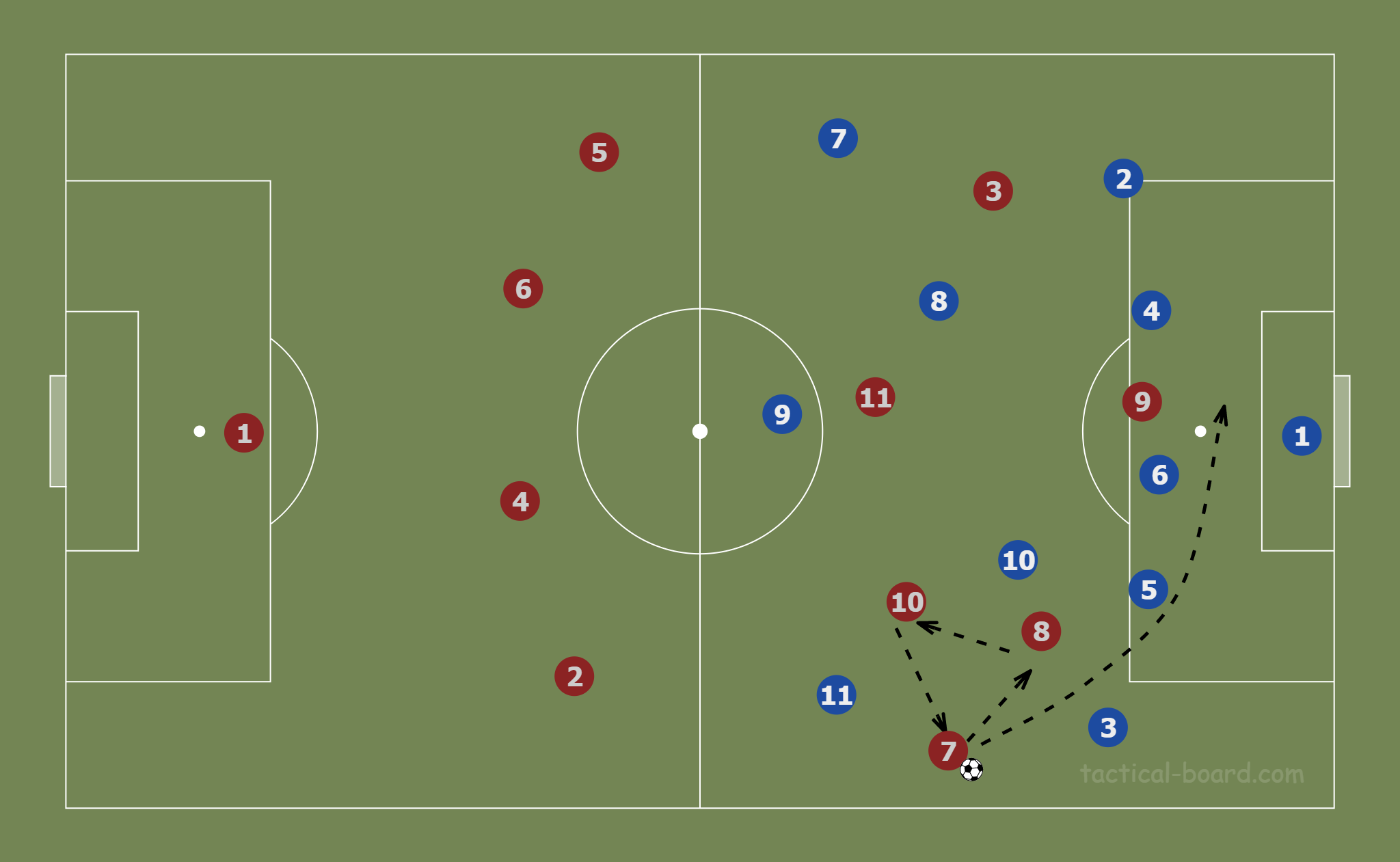 Alternatively, we will work the ball onto the right flank, where De Bruyne can attempt to get into space and swing a cross in towards Ronaldo. Again, Modric and Silva will be in close proximity, allowing the trio to play quick interchanges and create space for each other to burst into the box.

When we do lose the ball high up the pitch, we will employ a hybrid press, of sorts. The focus will be on making PSG pass to their weakest passers, while the rest of the team gets back to defend against quick balls to the rapid front trio. 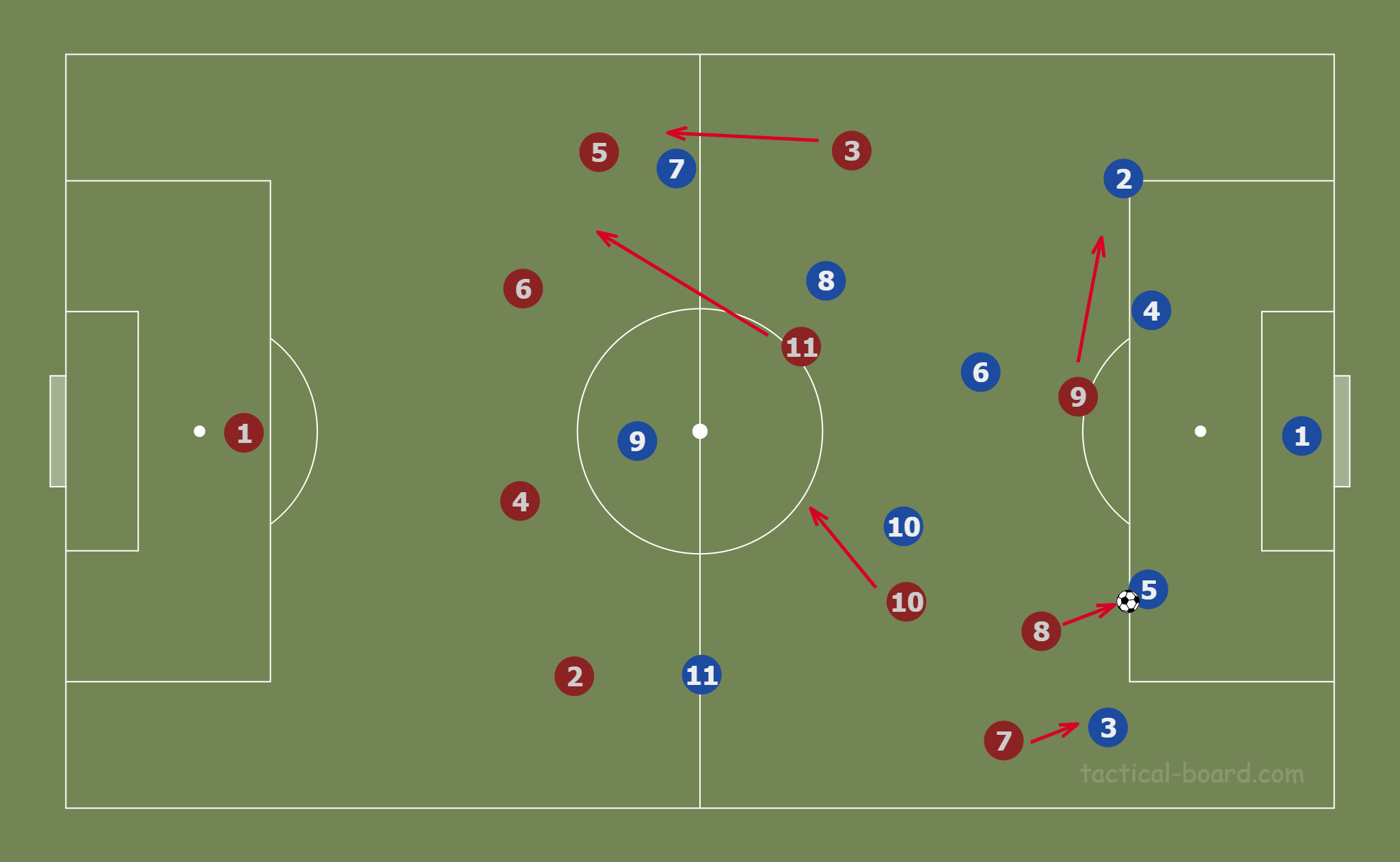 One scenario is where Modric and De Bruyne press the near-side defenders on the ball, while Milner and Robertson scurry back to cover the flank against Mbappe. Bonucci will attempt to jostle and deny Mbappe a clear run at goal, while up front, Ronaldo will be asked to move across and deny an easy pass out to Meunier. 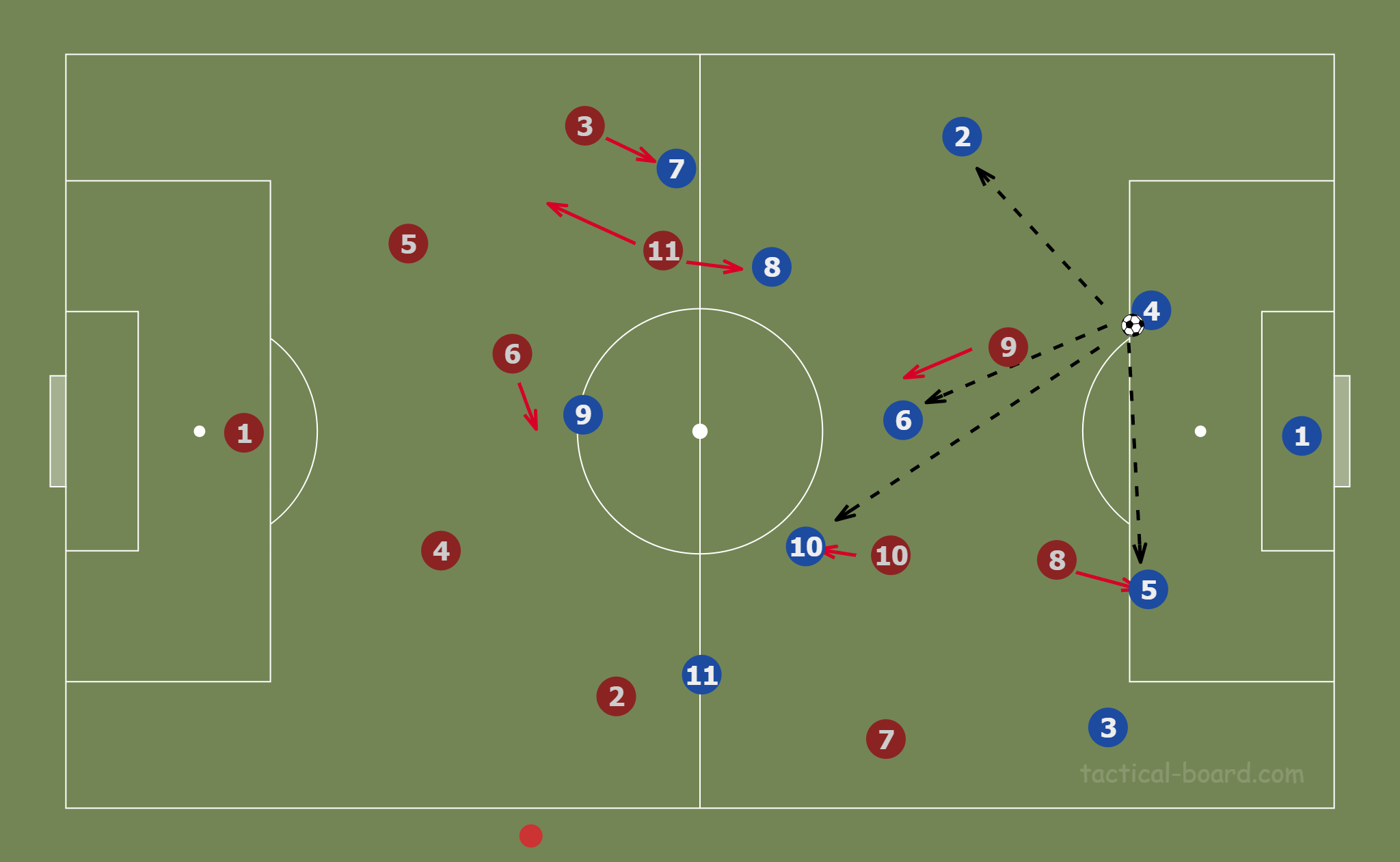 In the event that the ball is played across and PSG have the opportunity to break quickly, De Bruyne will snap back and look to prevent Dernat from charging upfield, while Modric stays up front with Ronaldo and prevents a simple pass to Presnel Kimpembe. Ronaldo will be asked to cover the passing lane to Marquinhos, while Silva will cover Verratti. At this time, Milner will once again have a dual role, of pressing Gueye if needed but also covering against Mbappe, while Robertson gets back into position. The team will be happy to have Meunier pick up the ball in a deep position, as this will give them time to set themselves in their defensive structure.

Thus, this is my solution for getting the better of PSG with a lineup consisting mainly of some oldies. With the likes of Ronaldo, Silva, Modric and Milner available, not to mention the defensive ability of Bonucci, and a top-class keeper in Samir Handanovic, augmented by some of the best players in the world in their positions, this is a team that can get past the Parisian giants if the cards are played right.