The end of the year, and indeed the decade, saw Manchester City travel to the Midlands, as Wolverhampton Wanderers played host to the defending champions. This season, it is almost certain that City will lose their crown to Liverpool; however, Pep Guardiola would still want to finish as high and with as many points as possible. Wolves put a huge dent in those plans at Molineux though, running out 3-2 winners and thus completing the double over City, having beaten them at the Etihad earlier this season. City went down to ten men very early in the game, with goalkeeper Ederson getting sent off in the 12th minute, but despite this they had a 2-0 lead through a Raheem Sterling brace. However, Wolves came storming back, and managed to get the win through goals from Adama Traoré, Raúl Jiménez and Matt Doherty. The performance of Traoré was especially bewitching to watch, as he terrorised the City defence from his right-sided position, and assisted Jiménez’s equalising goal along with scoring Wolves’ opener. This is the second time this season that Traoré has been decisive against City, having played a crucial role in Wolves’ win at the Etihad as well.

This tactical analysis scout report will look at the former Barcelona and Aston Villa winger’s performance, and highlight just why City were unable to cope with him.

Traoré’s numbers from this match make for interesting reading. The Wolves winger did better on most counts than his seasonal average for this campaign, showing how much of an impact he had on the match. Offensively, Traoré attempted an astonishing 13 dribbles, with 10 successful ones, giving him a 77% success rate, higher than his average for the season which stands at 70%. This will be seen further on in this analysis, as the winger was often able to isolate himself one-on-one with a City defender and then burst past by using his trickery and pace. He also had five shots with two of them on target, one of which was obviously the goal, and sent in ten crosses with a 50% success rate, much higher than his average of 36.2% this season.

These numbers highlight just how important Traoré was for Wolves in this match, and the following analysis will show how Nuno’s tactics worked perfectly for the winger.

Adama started the match on the right of Wolves’ three-man attack, with Jiménez as the central striker and Diogo Jota on the left. The heatmap below shows his positioning during the match –

You can see how he primarily took up wider positions on the right flank, but also came inside into more central areas, often playing as an ‘inside-right’ and taking up positions in the right half-space. This positional variance was crucial, as it kept City guessing and forced the likes of Benjamin Mendy and Bernardo Silva to move out of position to pick him up, leaving space for his teammates. One example can be seen here –

Of course, the fact that City were down to ten men did play a big part in this, as they had one fewer player to plug these gaps. Nevertheless, Adama took full advantage, and his positioning was a constant menace for City, especially in conjunction with Matt Doherty, the right-sided wing-back.

Doherty and Traoré were superb all throughout the match, and most of Wolves’ attacking threat came down their right-hand side. The fact that Traoré scored one and assisted another, with Doherty scoring the third, tells you just how dominant the home side were down their right flank. Crucial to this was the understanding between the pair – their movement was perfectly complementary and served to pull City’s players out of their defensive shape, or to create space for each other –

One of the two would stay wide, while the other would either come inside or ‘underlap’, or provide support on the flank –

This partnership worked wonders for Wolves, as City were constantly putting out fires in this zone of the pitch. Once again, this tactic’s effectiveness is borne out from the fact that all three of Wolves’ goals came from that side of the pitch. Traoré’s positioning in central areas played a big part in this –

This played a direct role in his goal in the second half, as we will see.

Doherty’s wide positioning on the right meant that Traoré could move into central areas and be relatively unmarked, as Mendy would have to stay wide to pick up the wing-back, usually leaving him in Bernardo Silva’s zone.

Thus, his positioning and partnership with Doherty on the right bore fruit for Wolves on the night, as they managed to beat the defending champions for the second time in the Premier League this season.

Adama Traoré has come on in leaps and bounds this season; he has gone from being an impact substitute for Nuno to throw on late in games against tiring defences, to being a genuine threat for the full duration of a match. This game against Manchester City was a great example of the danger he poses to opposition defences, as well as his own evolution. He is now intelligent enough to vary his positioning and not just play as a head-down, old-fashioned winger, and his contribution to this Wolves’ win was immense, with a goal and assist to his name. Adama Traoré is quickly becoming one of the hottest players in the league, and performances like this one will only serve to increase the spotlight on the former Barcelona man. 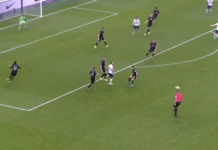 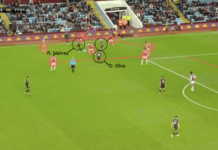 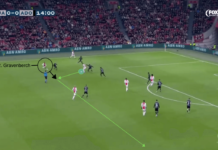 Toulouse 2019/20: Analysing why they are struggling this season – scout...