Set pieces are no longer a luxury. This season, we have witnessed the growth of many teams in this aspect across the top leagues. Nicolas Jover with Arsenal, Bernardo Cueva with Brentford, Gianni Vio with Tottenham and others, became a prominent piece of the team’s personality with their set-piece tactical routines.

The key components of successful set pieces are the delivery of the ball and the positioning of players.

In this tactical analysis, we will dive into some good routine tactics used by teams in English Premier League and La Liga in the two rounds, with an analysis of how they have created so many high-quality chances from them. This set-piece analysis will look at the different techniques they’ve utilised and how they have been useful.

A key tool for Newcastle in their new era with Eddie Howe is set-pieces routines. It seems that the coaching team is working a lot in this crucial and modern aspect.

While The Magpies were facing Palace in EPL week 21, Newcastle tried to execute a decent routine through a free-kick.

Here, While Kieran Trippier is taking a central free-kick, there are three players positioning themselves on the left, one central and two players on the right. Meanwhile, Palace are in a man-oriented approach and have four players in the wall.

Furthermore, two players alongside Trippier in the rebound zone are ready for the second ball and acting as a part of the rest defence, ready to prevent any transition. 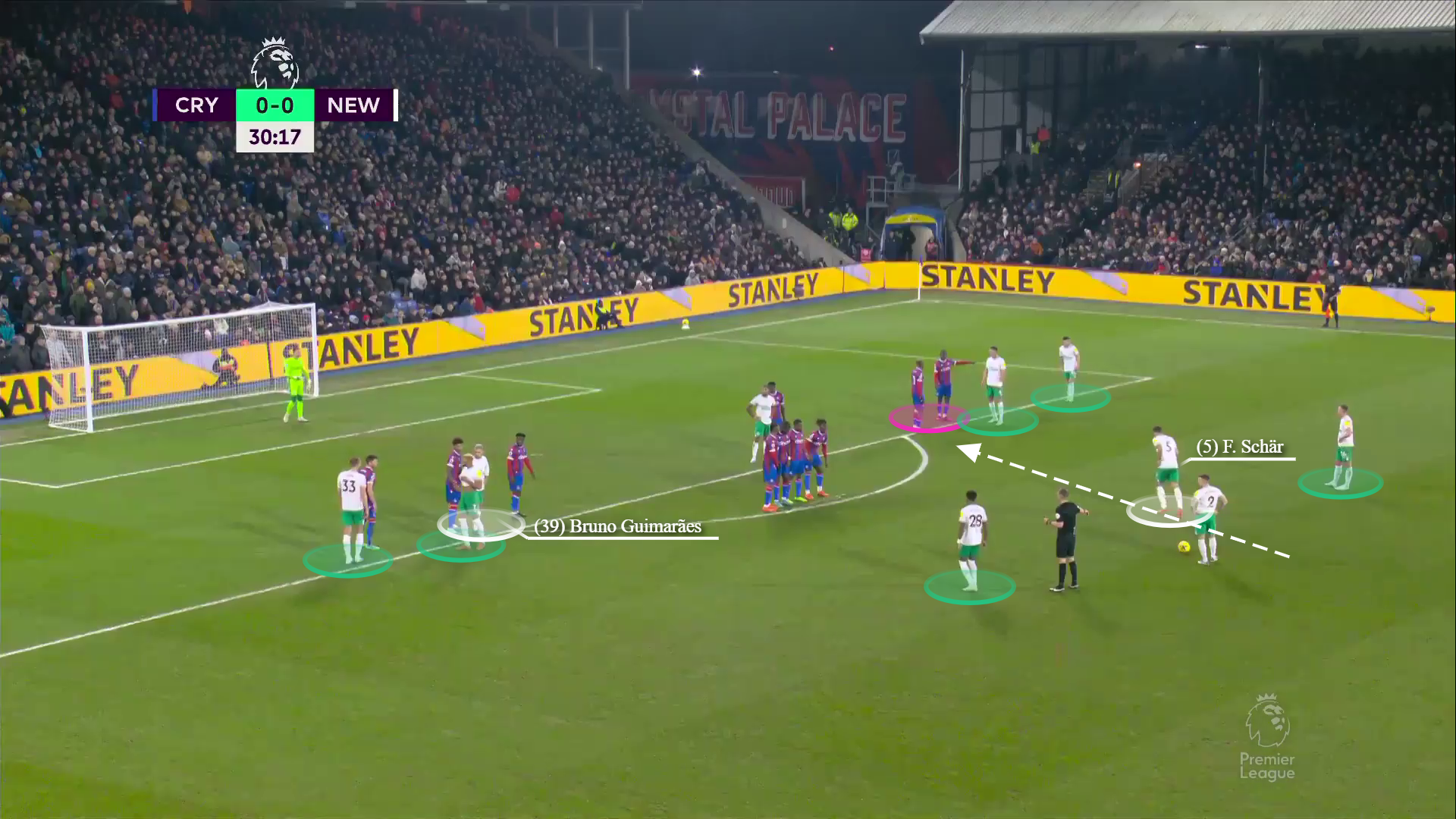 The routine would depend on manipulation. Instantly before the play, Fabian Schär starts the routine with a late run to the right-hand side, creating an overload of 3v2 while Trippier looks left waiting for a move from Bruno Guimarães. 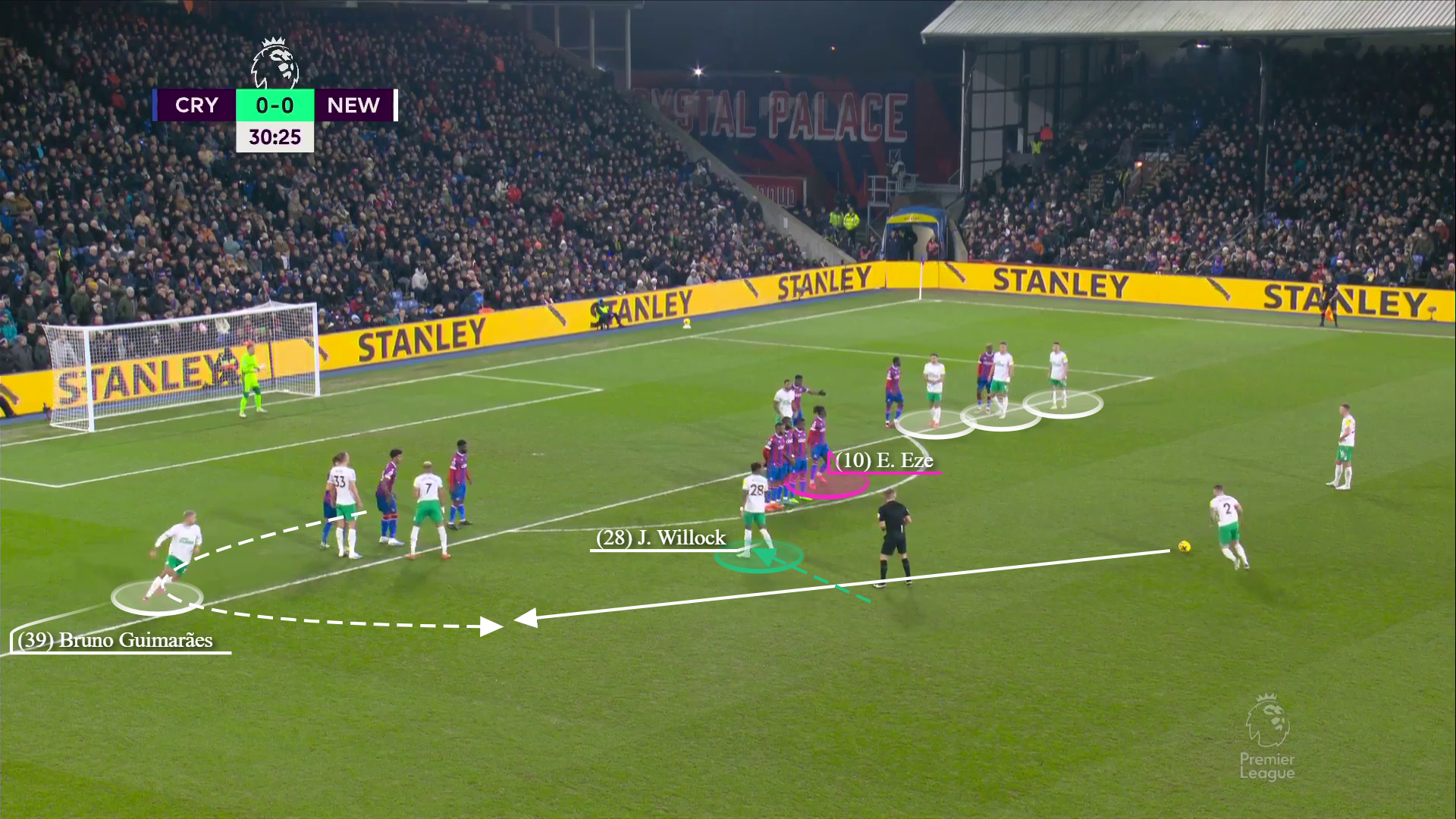 Immediately, Mitchell signals to Eze to leave the wall and move to deal with this 3v2 numerical advantage on the right. On the left, Guimarães had started his run around the markers to receive the pass from the kicker, meanwhile, Willock had also moved above a little to open the lane. 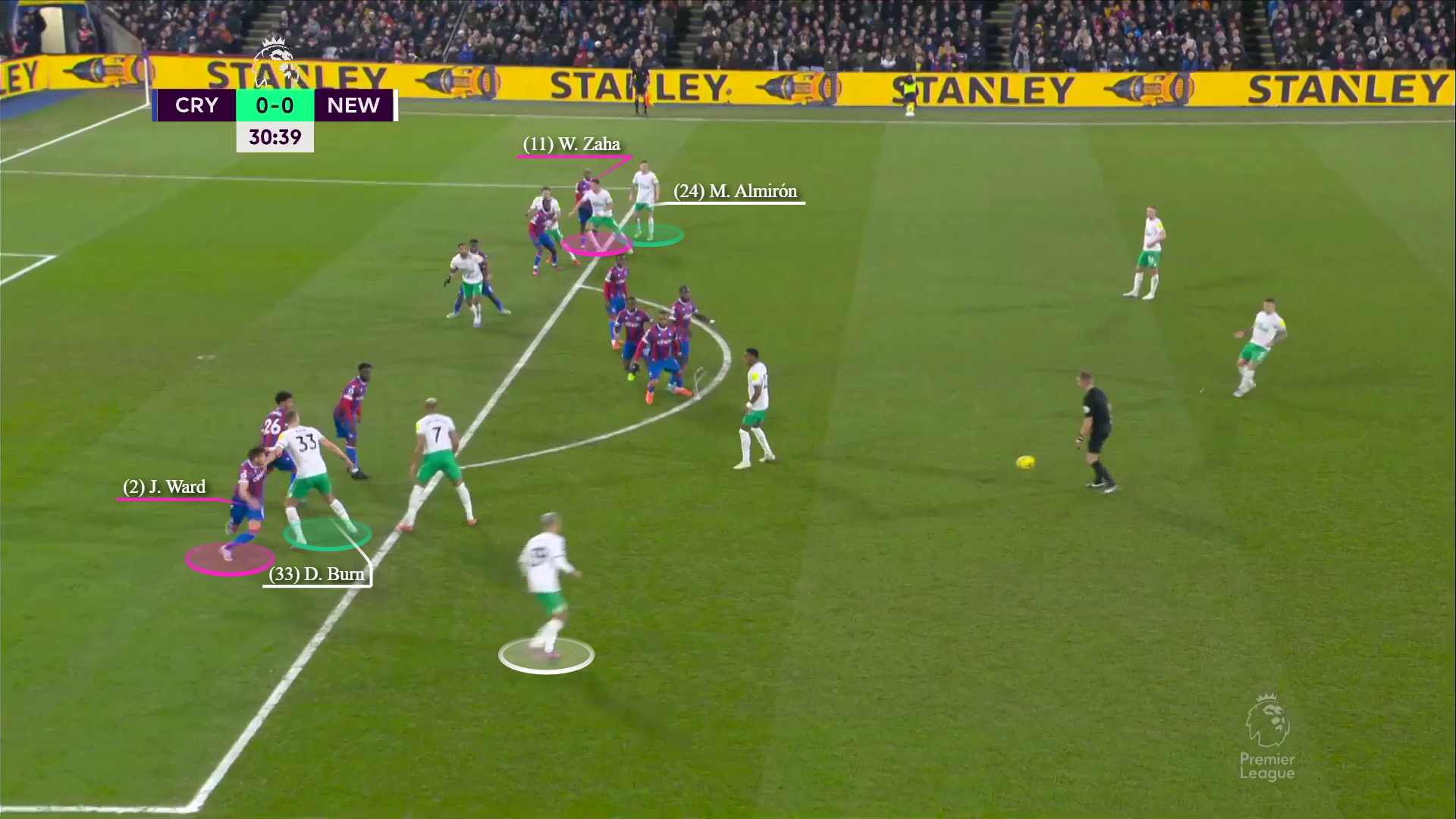 At the same time, Burn is using his arm to prevent Ward from tracking Guimarães while Newcastle’s two players are starting their diagonal runs.

On the other hand, Miguel Almirón purposely does not run which confuses Zaha and delays him in following the runners, creating a mismatch by confusing the oppositional cover with their movement. 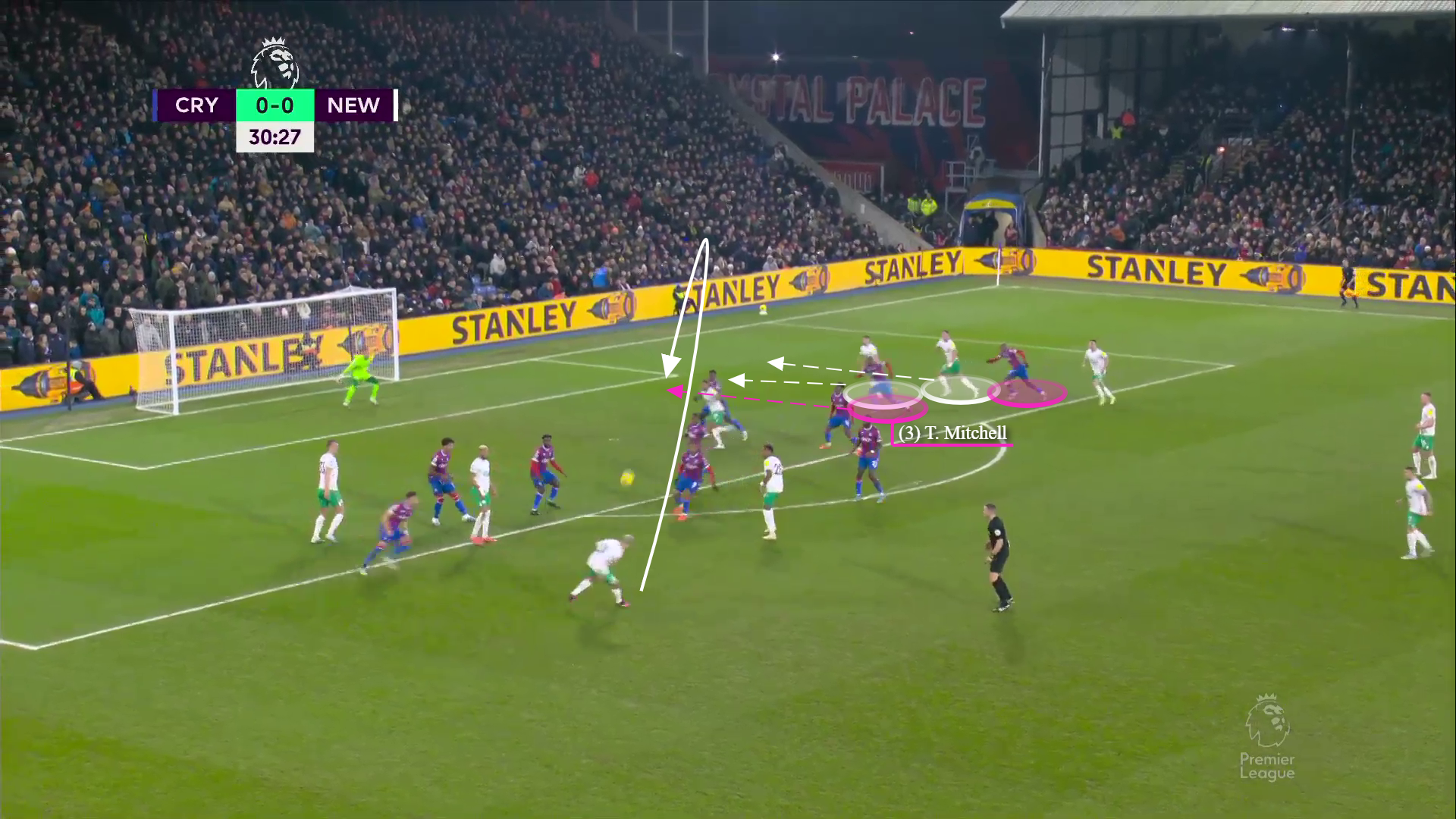 Above, Guimarães played the cross near the six yards waiting for Sven Botman and Fabian Schär but Mitchell did an excellent cover and reached the ball first to push it away. 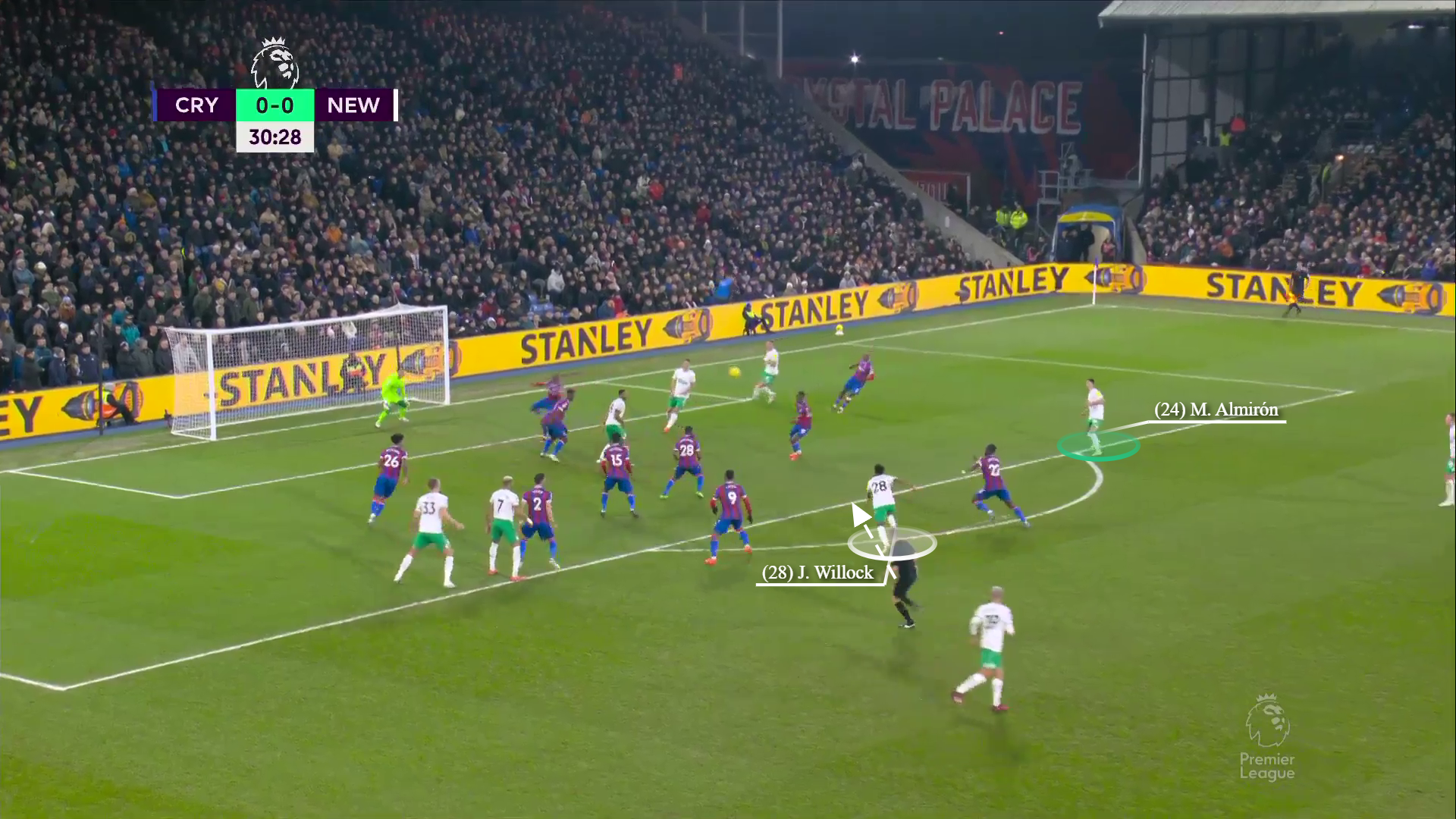 Almirón and Willock’s inside and forward movements respectively weren’t random. There were movements to the rebound zone to collect the second ball. Willock succeeded in reaching the ball and then threw it away from the goal because of the bad time shooting. It was brilliance from both teams.

In La Liga Round 18, Real Sociedad, under the command of Imanol Alguacil Barrenetxea, faced the ninth-placed Rayo Vallecano. The 37th minute came with a goal from a brilliant corner routine for Sociedad.

Rayo are using a hybrid defensive system a combination of zonal and man-marking approaches. Sociedad’s players in the box are marked while positioning themselves with three central, one player in front of the six-yard box and another one on the far post meanwhile having two players in the rebound zone and one player ready for the short corner. 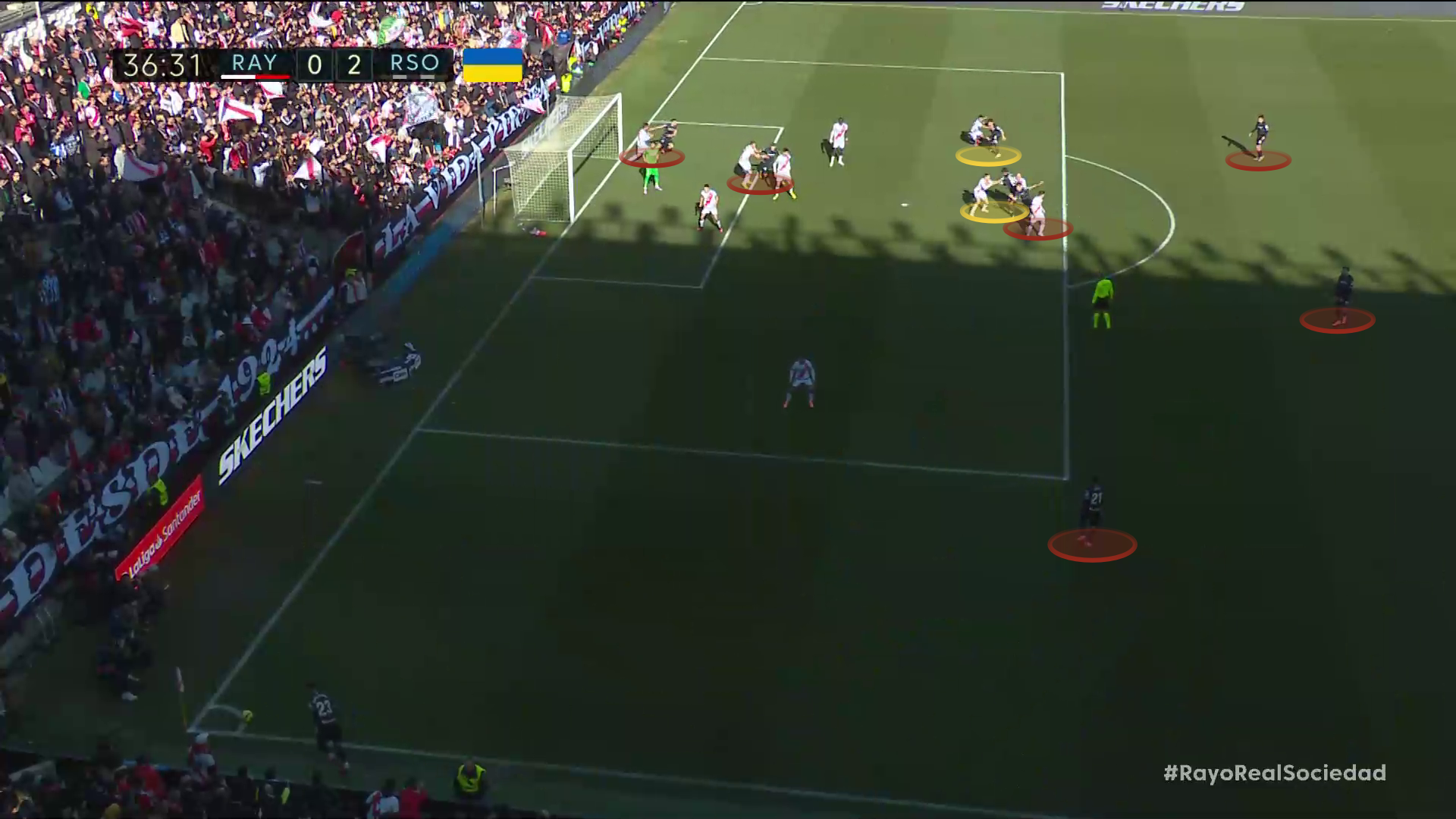 The outswing delivery from David Silva will target the near post or the flicking zone and then he will deliver to the far post. The main targeted players are Aritz Elustondo and Ander Barrenetxea in yellow colour.

Using the run for flick-ons. the ball near delivery can manipulate the first line to make movements towards the ball, which can open ball far areas for the 2nd ball.

After Aritz Elustondo had used his arm to separate from the marking, Le Normand is grabbing his marker meanwhile doing an excellent side-block to Elustondo’s marker, preventing him from following. 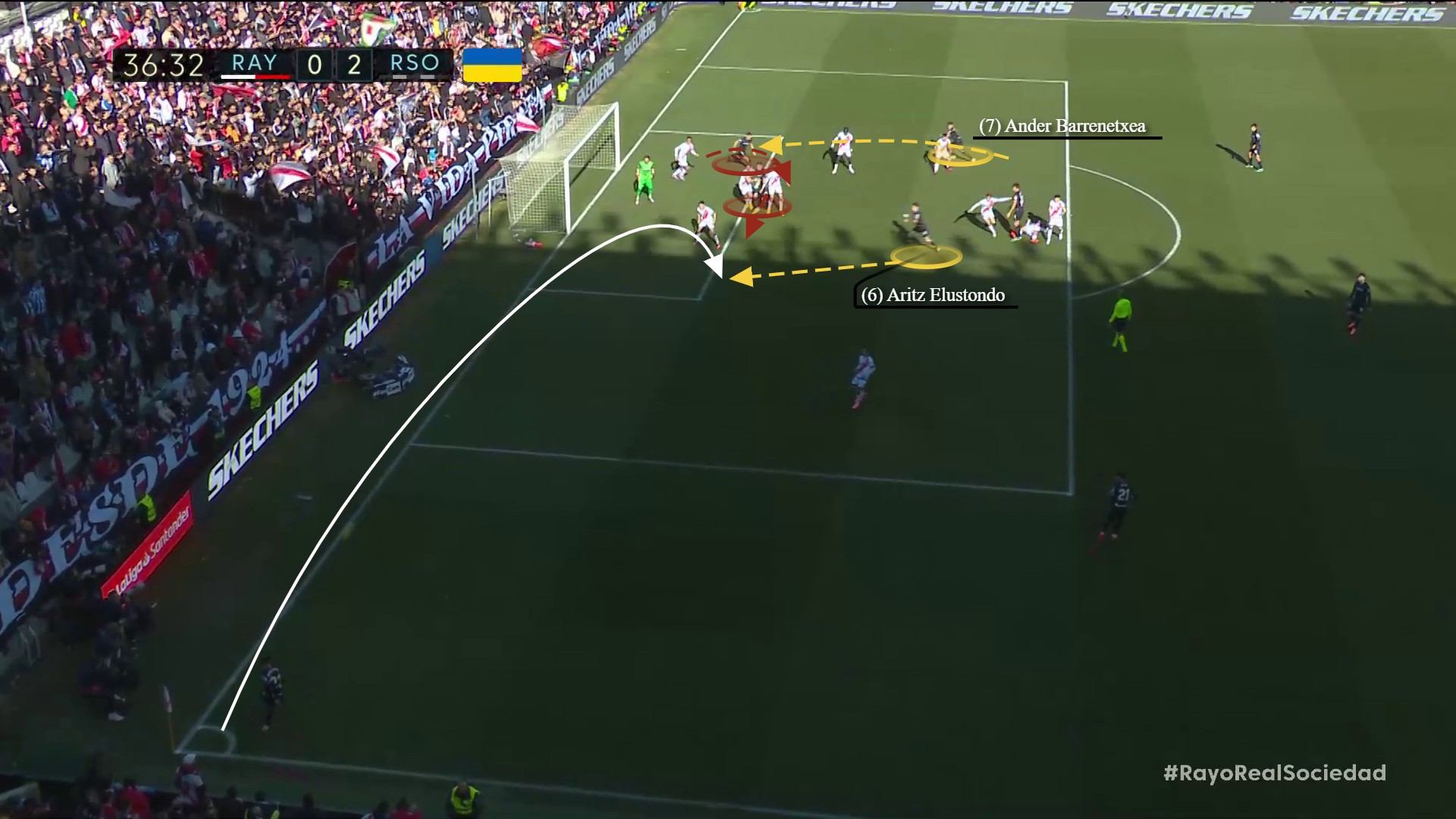 Above, while Elustondo had succeeded to dismark well and then is running to the flicking zone, Sociedad’s two six-yard players are moving to drag their markers away from this area.

Ander Barrenetxea also did a double movement and successfully escaped from the defender and then intended to move toward the far post.

In the below scene, Aritz Elustondo succeeds in flicking the ball above the defenders toward the far post. 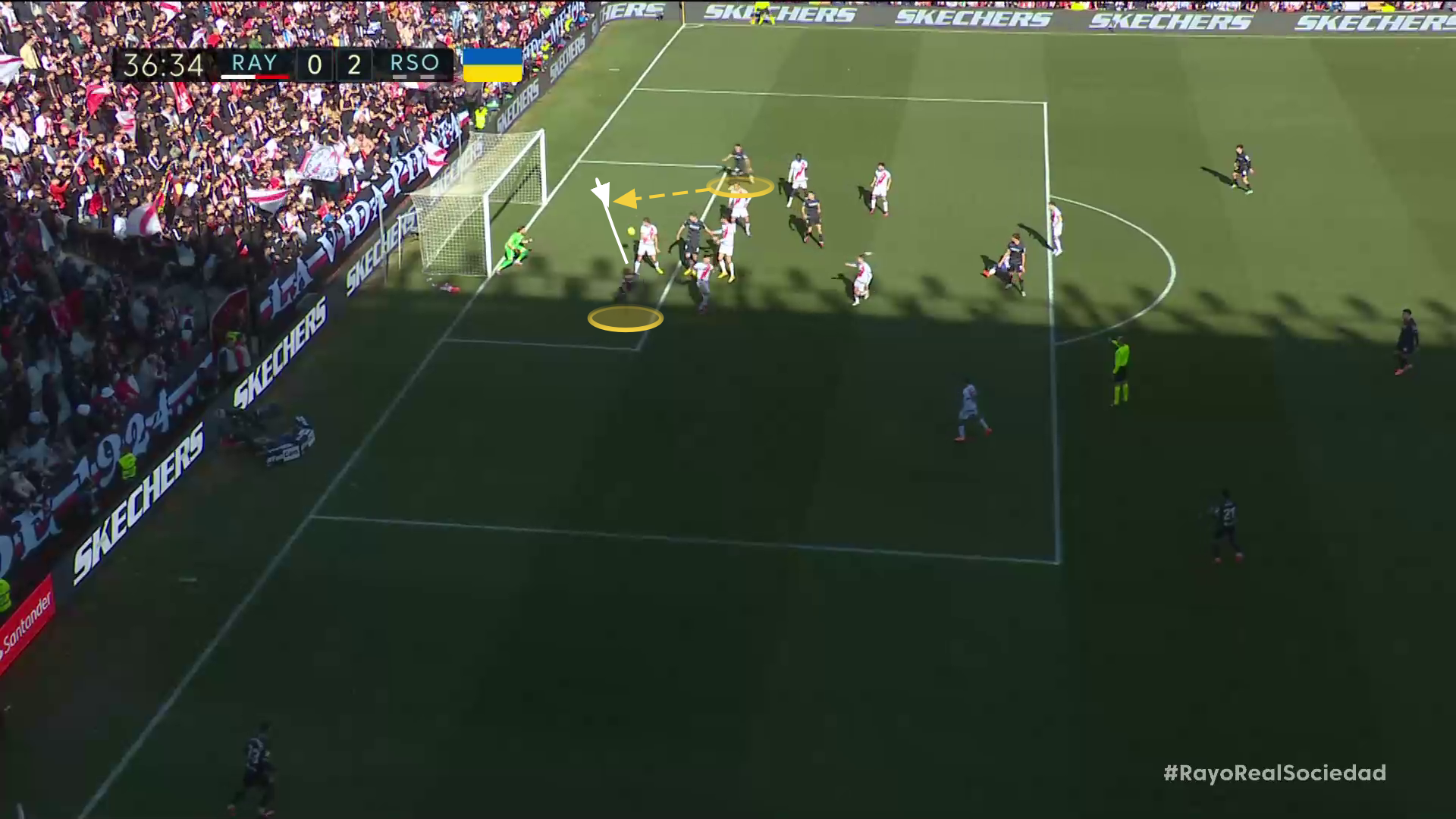 The ball successfully came to its destination to Ander Barrenetxea who scored without any noise.

At one of the biggest EPL battles this season between the historical rivals Arsenal and Manchester United, the Gunners had a decent corner routine that needs to be explained. This season, the London club have become very sophisticated in this field under the command of Brendford’s former set-pieces coach Nicolas Jover.

Manchester United are using their regular mixed approach to defend the corners.

Bukayo Saka would play the inswing corner to the targeted area which the other players would attempt to create for Gabriel Martinelli for the shot at the near post.

Below, Christian Eriksen has been confused about who he should track, Gabriel Martinelli or Oleksandr Zinchenko, which created a 3v2 overloading central. 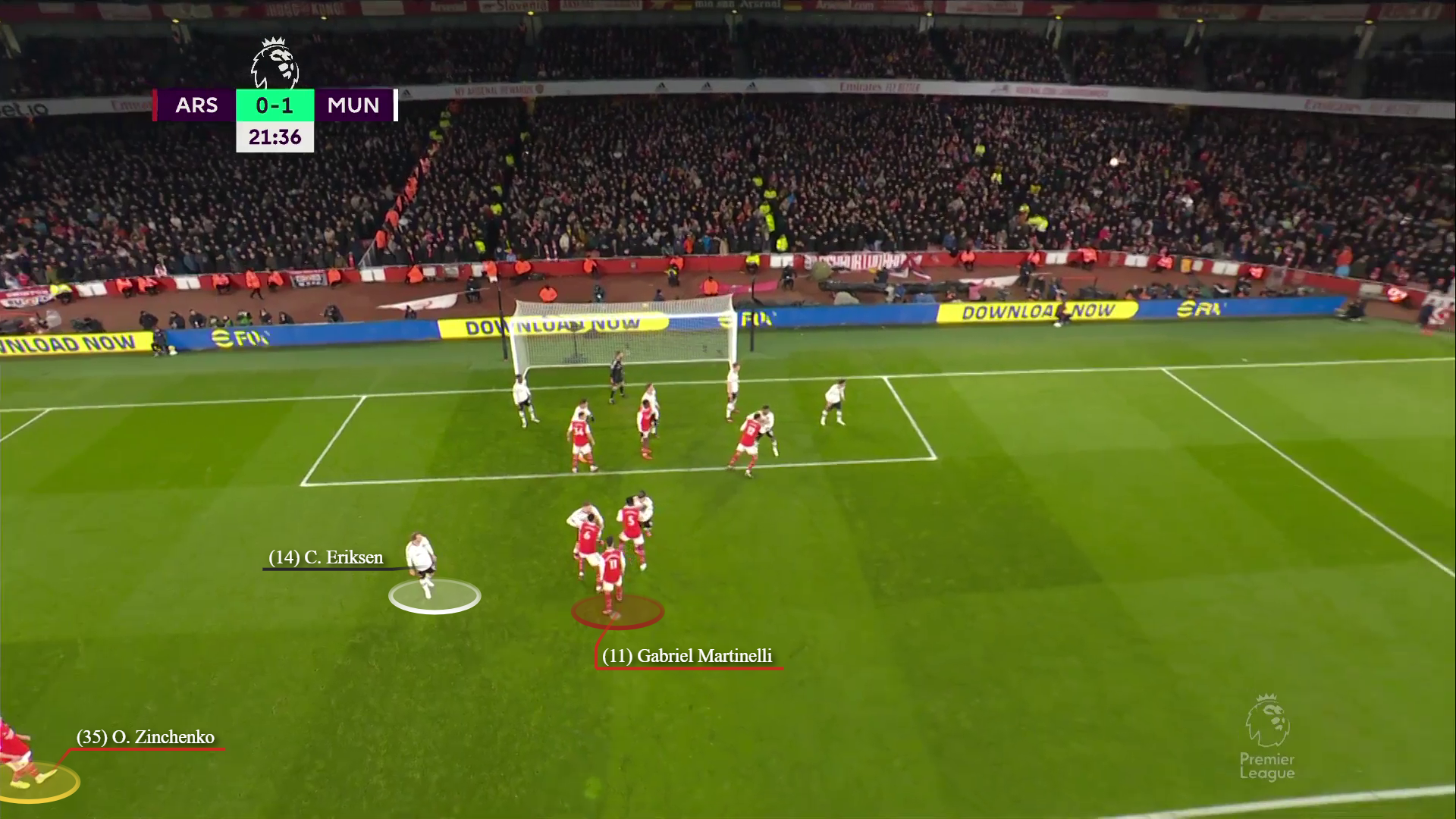 On the other side, Man United’s organization logically should have Antony on the same line as Eriksen but he has been manipulated well to defend against the short corner. Which is opening up the passing lane to the targeted area.

It’s easier to manipulate the man-marking scheme than the zonal approach because there is a smaller probability to find an open shooting lane. 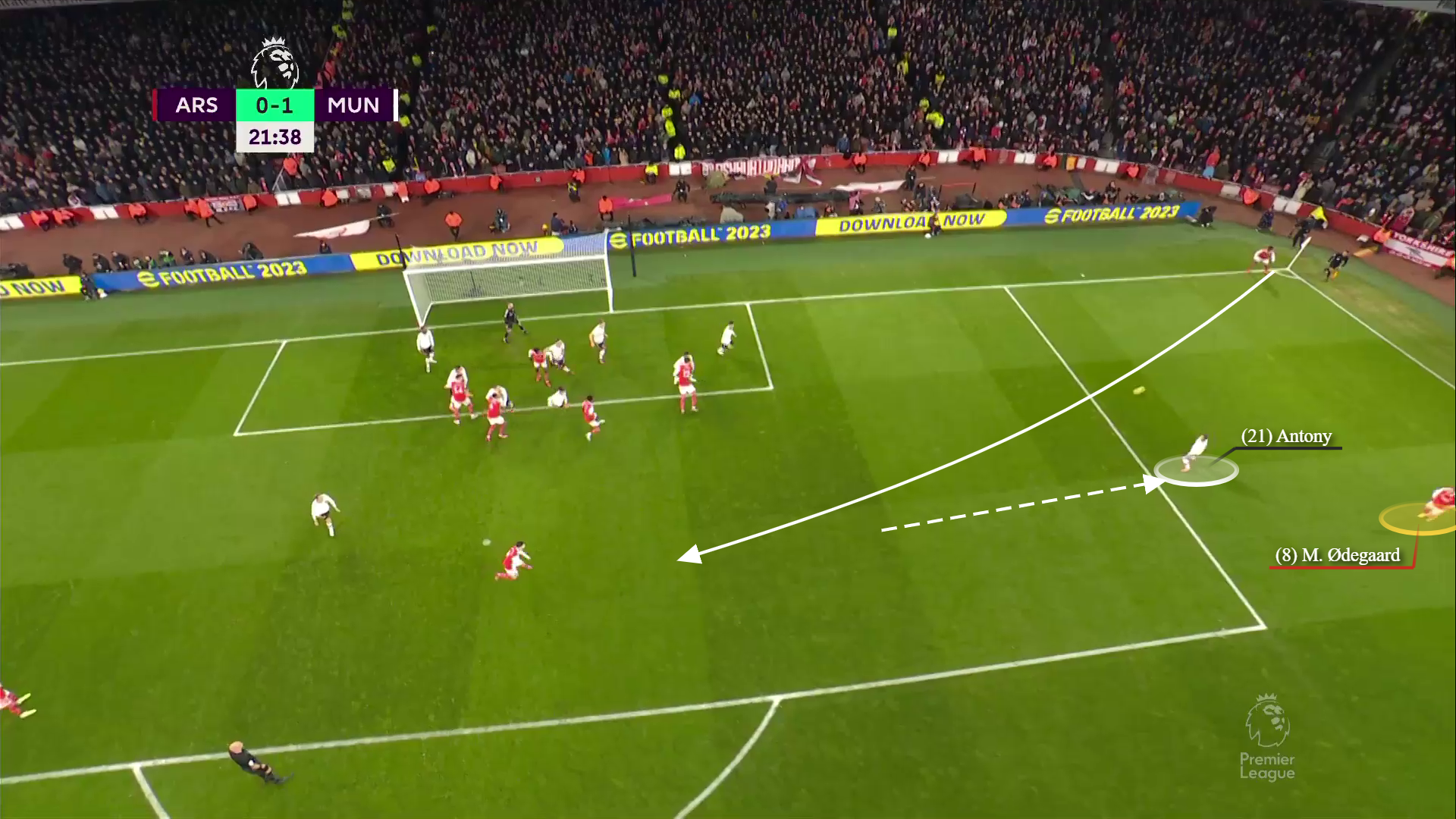 Below, Gabriel and Partey moved forward, dragging their markers and then blocking them away. Likewise, Saliba and Xhaka are attempting to do the same thing. Gabriel Martinelli is moving horizontally to the space to shoot. 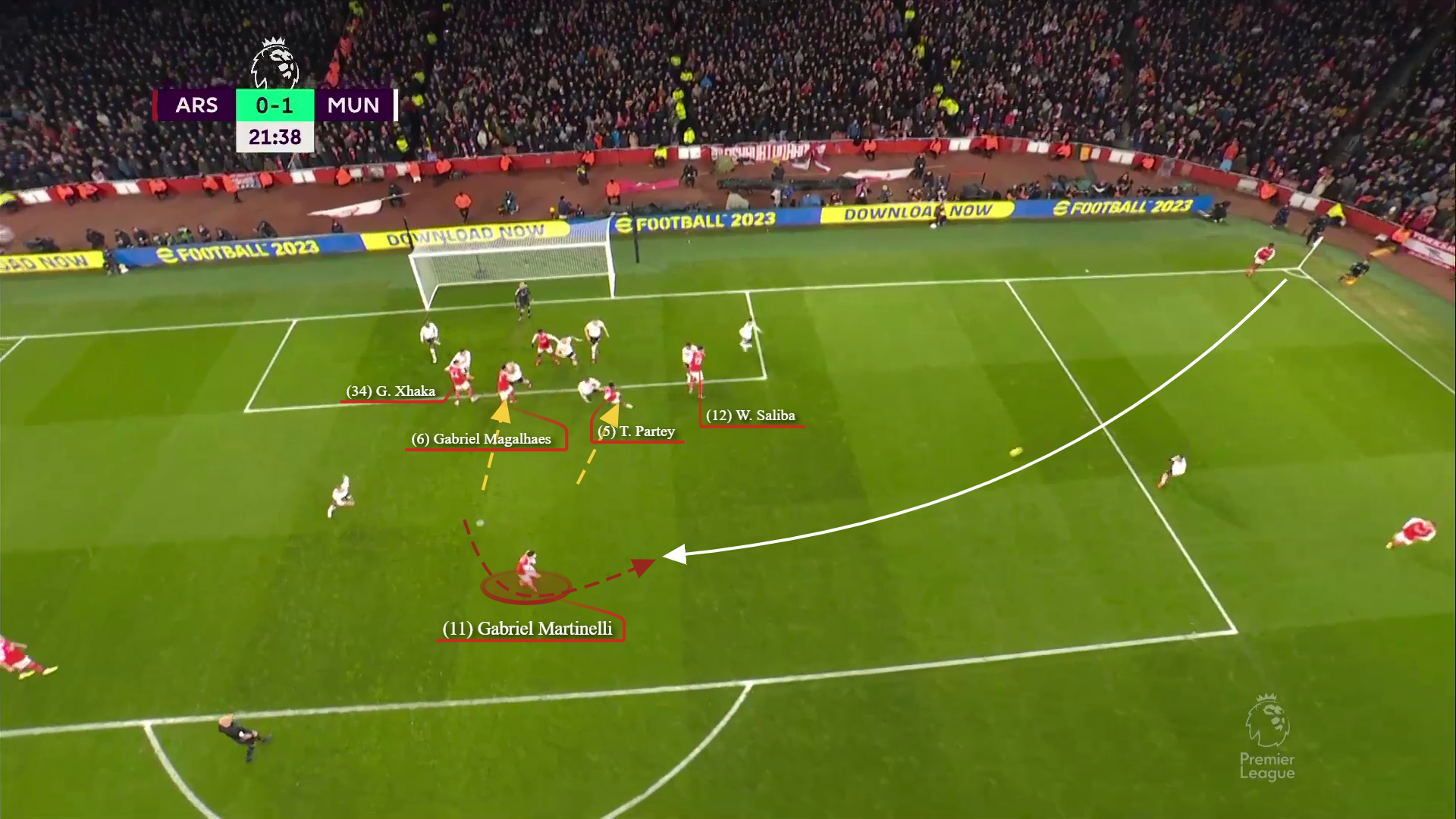 And even despite Martinelli’s bad curved shoot, Martinez and Weghorst escaped well to meet him.

After Gerard Moreno missed a penalty in the 93rd minute against Girona, Villarreal took advantage by winning another penalty, scored by Parejo in the 99th minute through a corner routine which confused the opposition and forced them to make errors.

ِGirona are using a man-marking defensive scheme, marking five attacking players who positioned themselves centrally. Meanwhile, Mamadou Fall was at the edge of the box, ready to attack a specific area. 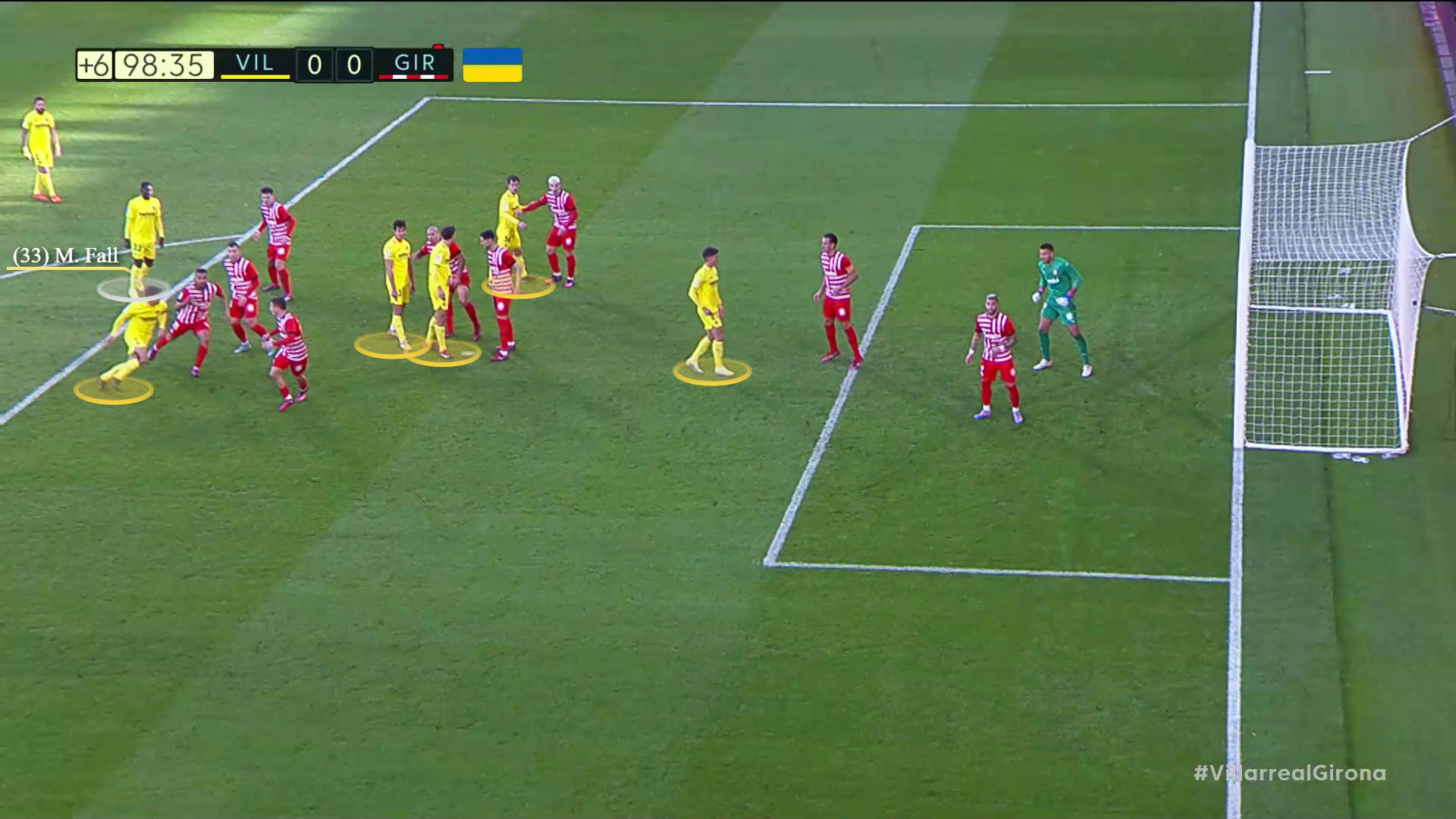 Below, Moreno is joining Torres and Mandi, forming a line against three markers. Moreno and Torres are blocking the defenders from marking Mandi. Furthermore, Mamadou Fall is breaking through the box.

The routine is to initialise the situation for Mandi and Fall who would move in an X-motion, targeting the far and near posts respectively. 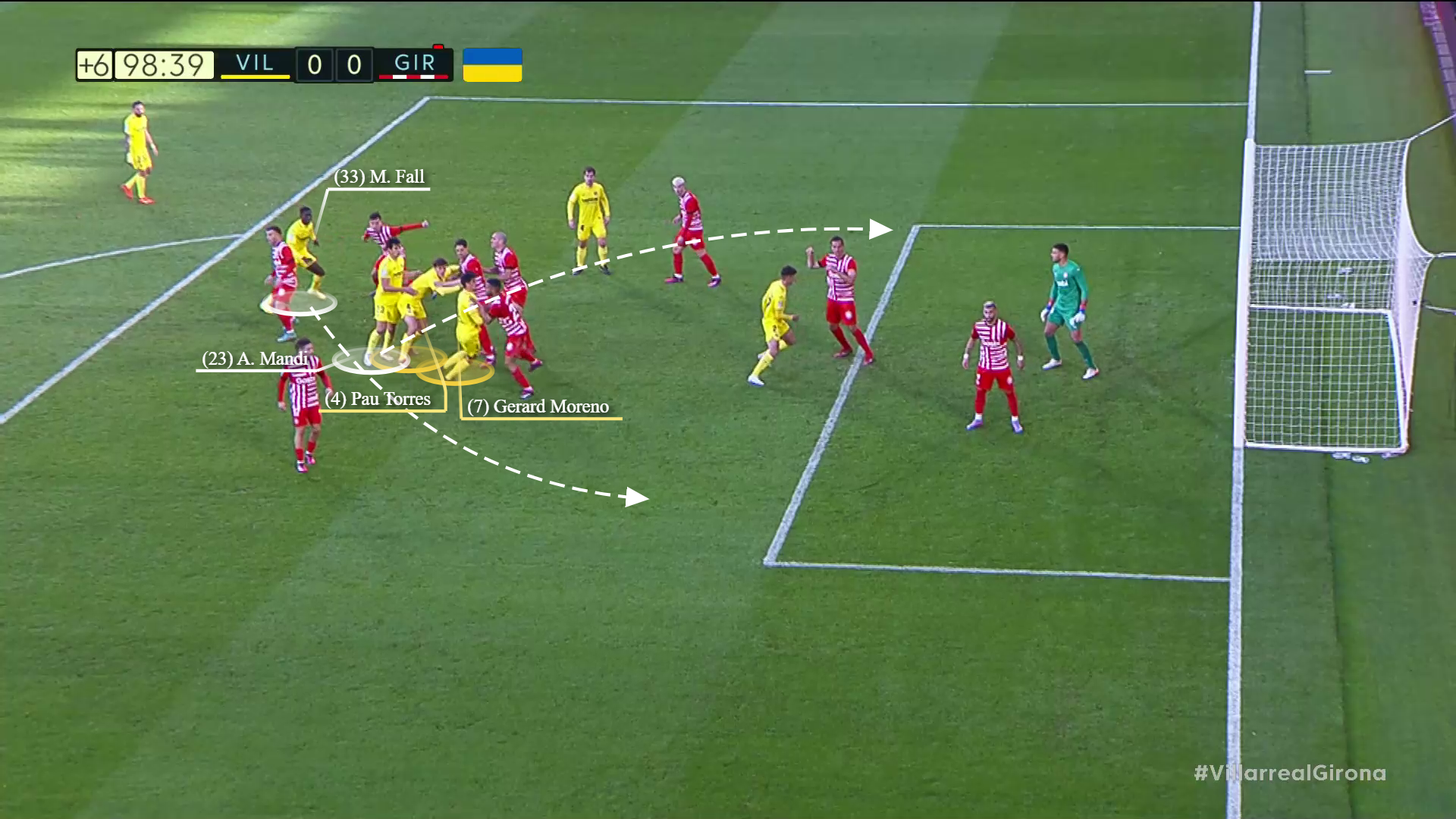 Below, Mamadou Fall is attempting to reach the ball to flick it while three players are blocking the defenders from joining him. Furthermore, Mandi is succeeding to reach the far post. 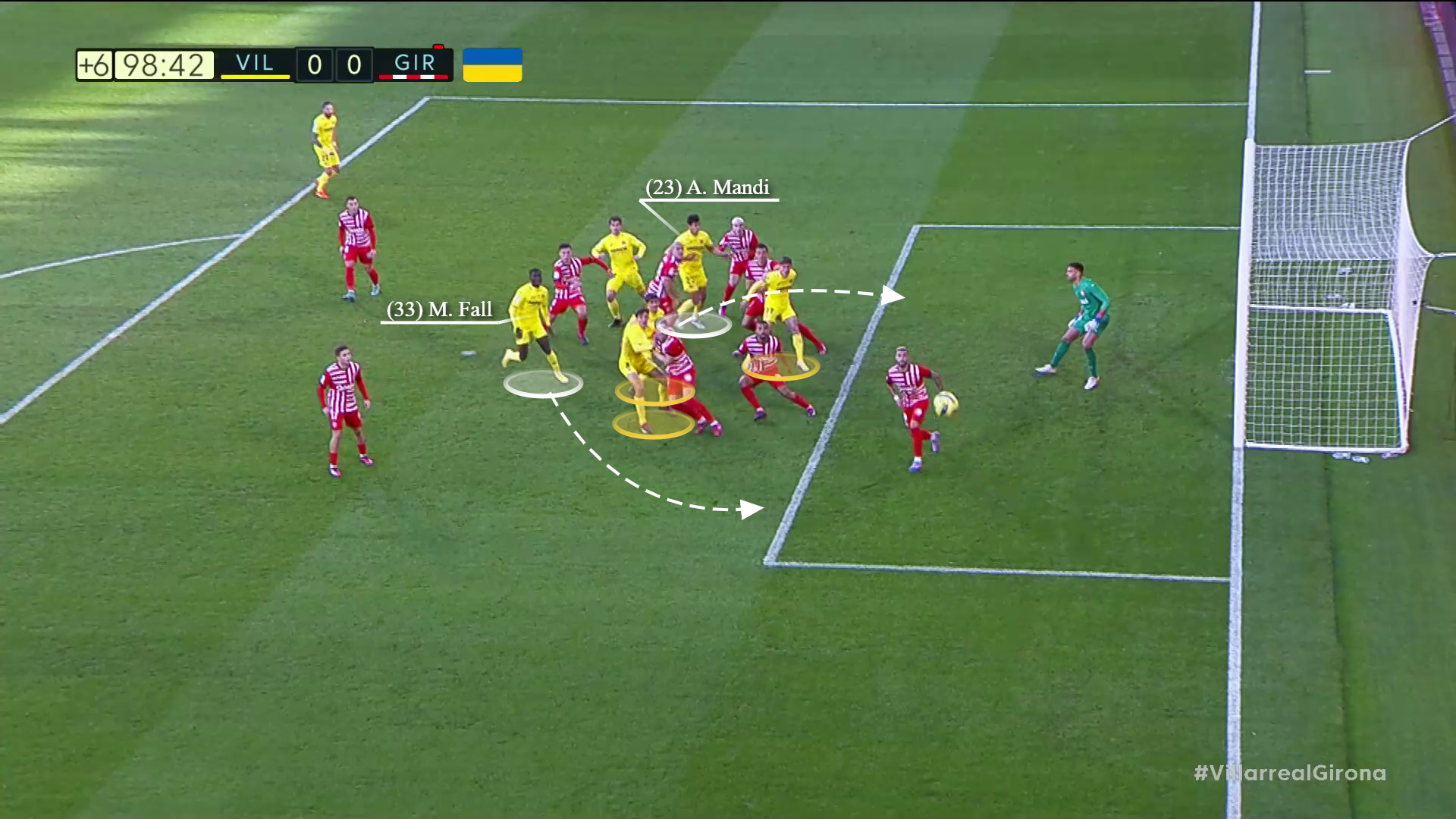 Once Mamadou Fall flicked the ball, Mandi (23) is on the far post. But the most decisive factor was something else. Before Mamadou Fall reached the ball, the defender aggressively pulled Torres down for a long time which caused a penalty.

In their 0-0 draw, Chelsea had a fine free-kick routine against Liverpool. In order to manipulate Liverpool’s line and zonal-marking approach, Chelsea are using overload and early fake runs.

Below, while Gallagher and Ziyech are taking the free-kick to bewilder the opposition as to whether it would be an inswinging or outswinging kick, Badiashile, Chalobah and Silva are overloading the blind side of the line. Furthermore, Hall and Havertez are ready to make early runs that can manipulate the line and take the attention. Also, Mount and Jorginho are ready for any second ball or counterattack from Liverpool. 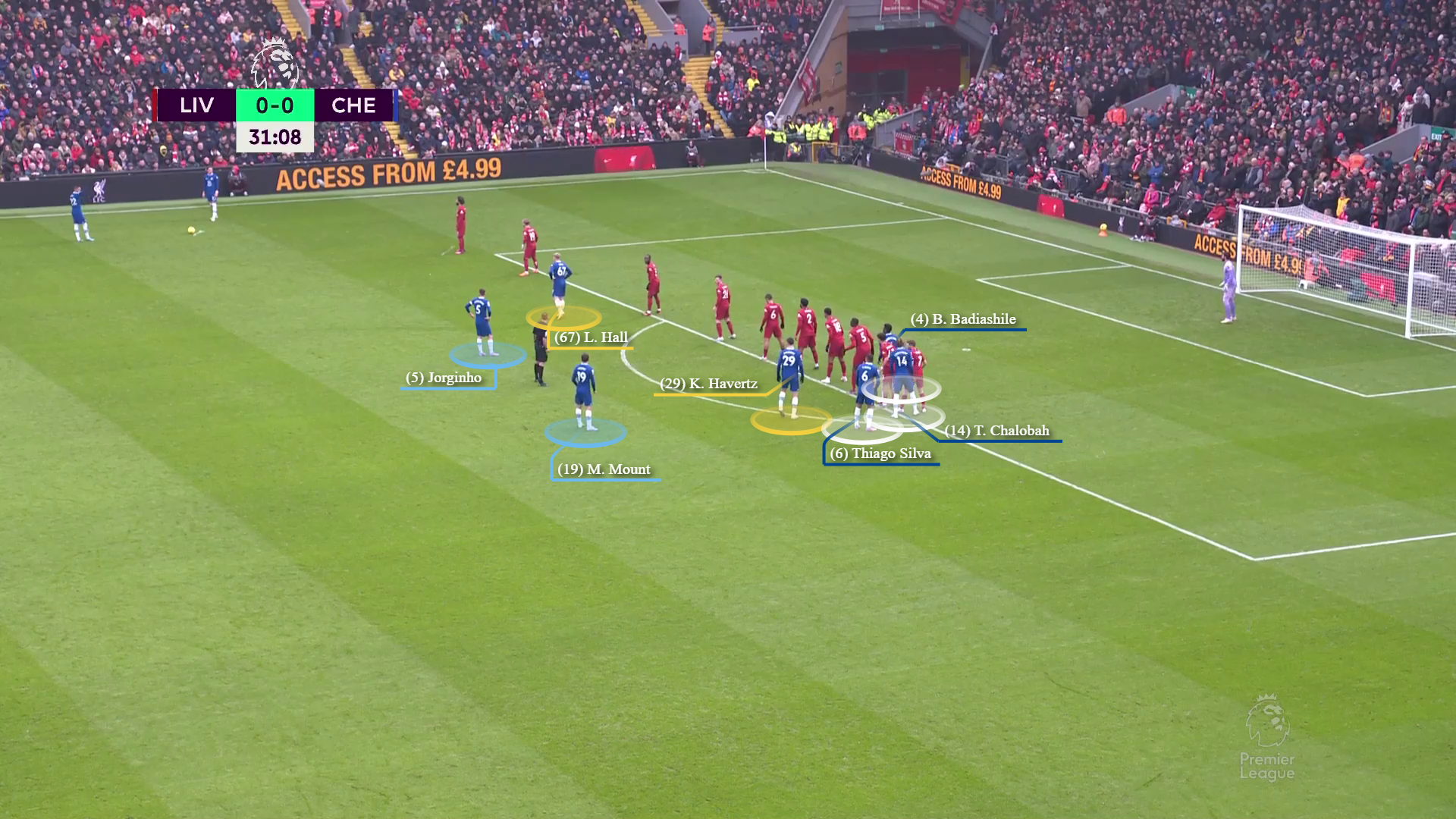 Ziyech is taking the outswinging kick which is seeking to reach the far side to the players who run in the blind side. Hall and Havertez are moving to cause issues. 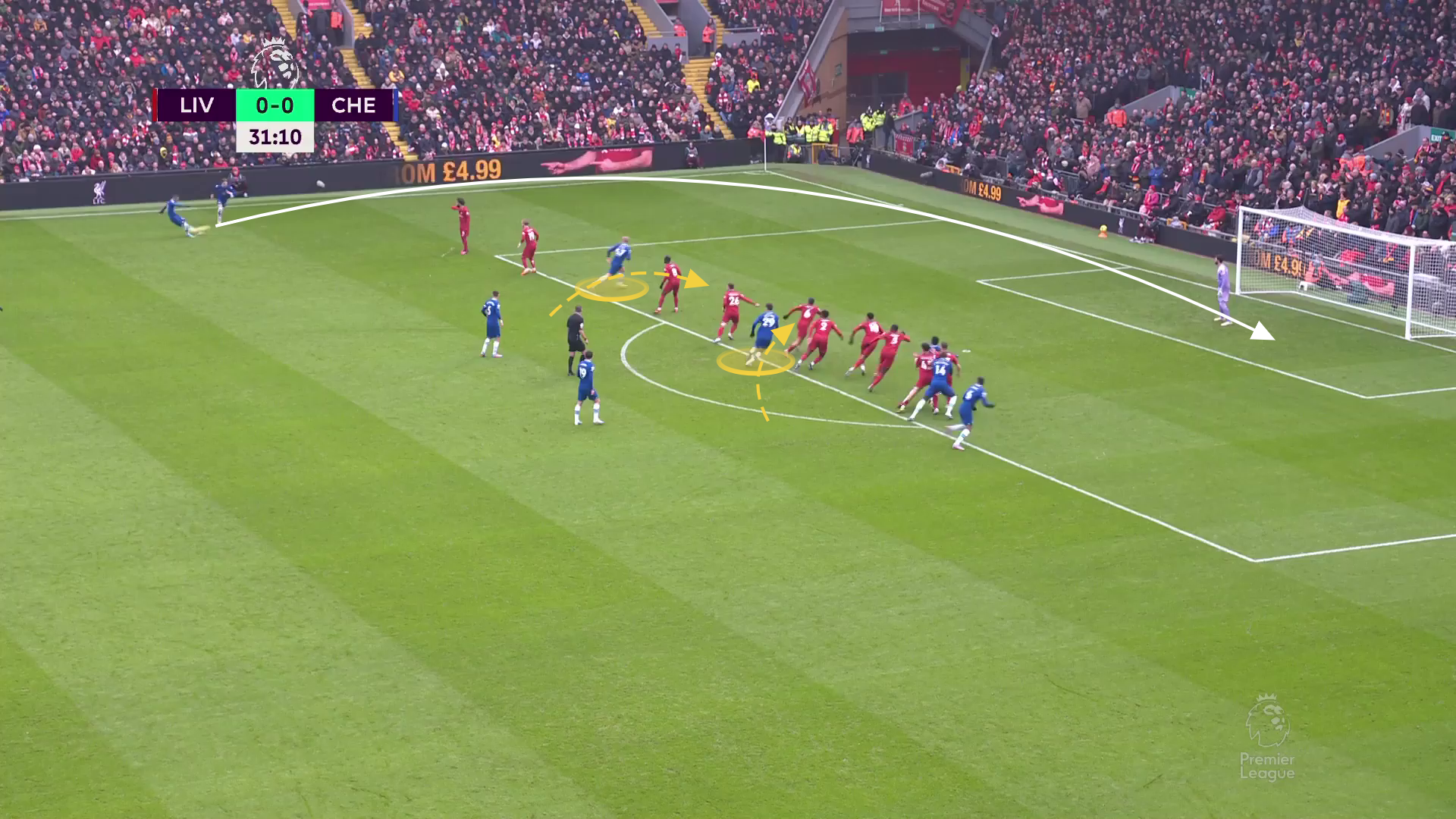 It is important for the excellent ball from Ziyech also hit the ground before reaching the targeted area, which made it difficult for the defenders and Alisson. 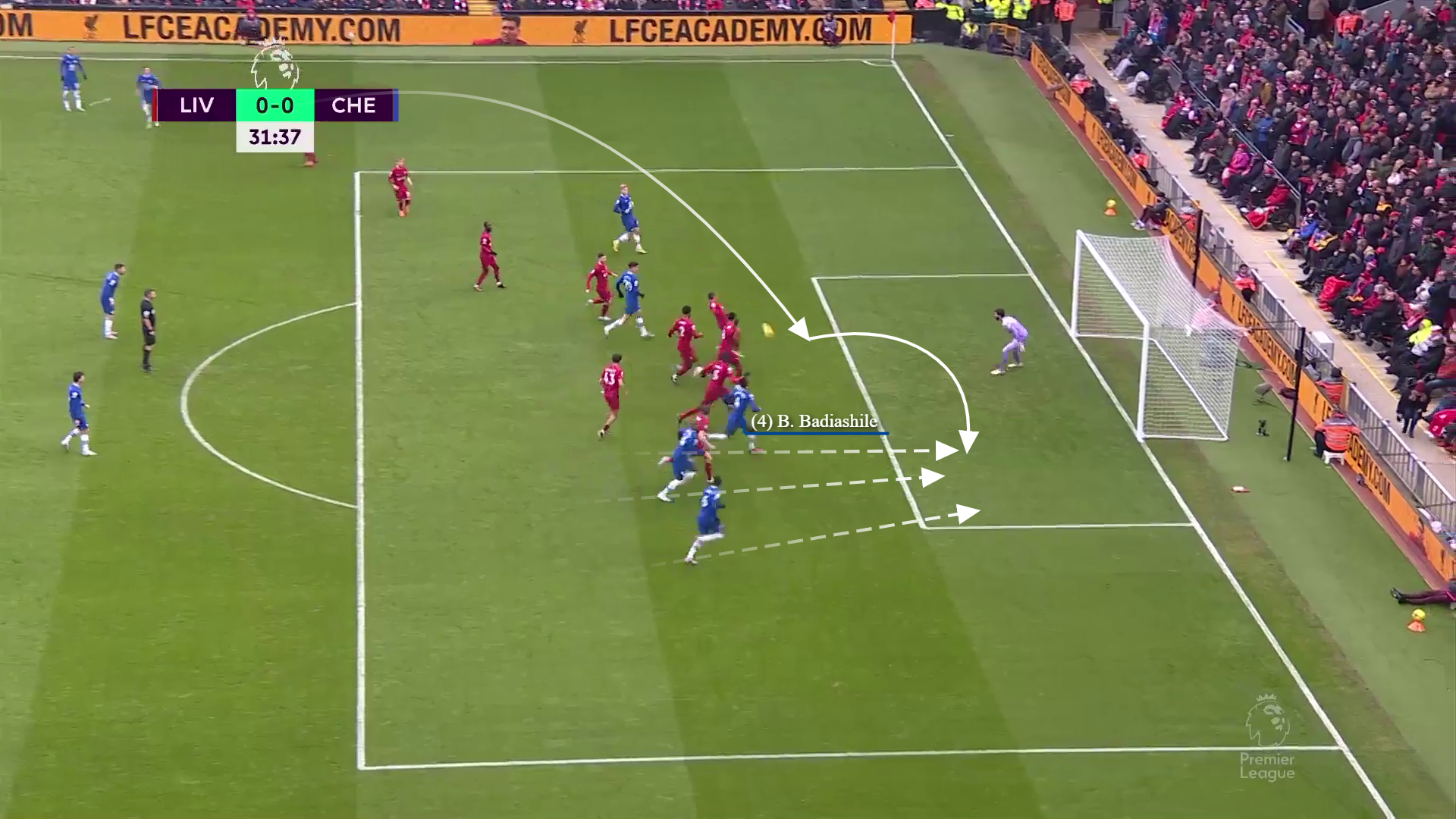 In conclusion, set pieces are a vital aspect of football that can often determine the outcome of a match. A well-executed set-piece strategy can provide a team with a significant advantage over their opponents, both offensively and defensively. The ability to deliver the ball accurately and with pace, combined with proper player positioning, are key components of a successful set-piece strategy.

Teams that invest time and resources into practising and perfecting their set piece executions will have a distinct advantage on the field. In the end, set pieces are a fundamental part of the game that should not be overlooked by coaches, players, and teams. 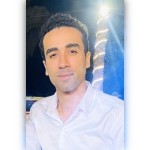 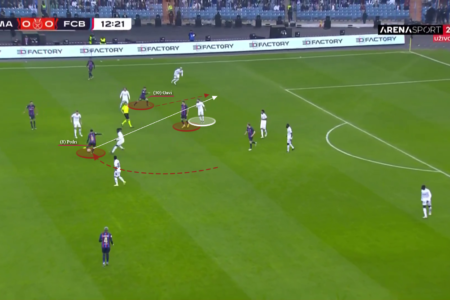 Even at a tough moment in the history of Barcelona, one of the most successful and popular football clubs in […] 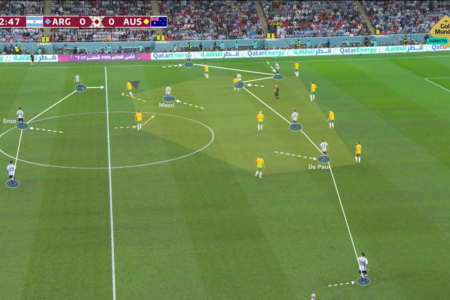 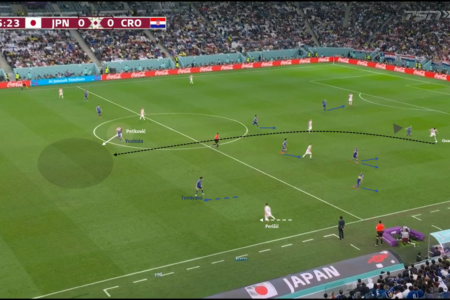