To say Zeno Debast‘s rise has been astronomic would be an understatement. After being a product of Anderlecht’s famed youth academy, Debast was handed his first team debut in the May of 2021, at the age of 17. Now, in a new system under Felice Mazzu, Debast has started every single league game for Anderlecht so far this season, playing as one of the three centre-backs in Mazzu’s preferred 3-5-2 system.

His performances have also attracted the attention of Belgian national team boss and former Everton manager Roberto Martinez, who has seen enough from Debast to give the 18-year-old his first caps at senior international level, with the centre-back starting in Belgium’s last two UEFA Nations League games against Wales and the Netherlands.

This tactical analysis and scout report will take a look at some strengths that are developing in Debast’s game so far, and take a glance into why the future looks bright for the young Belgian international centre-back.

When Debast was handed his Anderlecht senior debut at the back half of last season, the Belgian was under the management of former Manchester City defender Vincent Kompany. This meant that Debast was part of a back-four system. Now under Felice Mazzu, Debast has been playing as the right-sided centre-back in a 3-5-2 system. 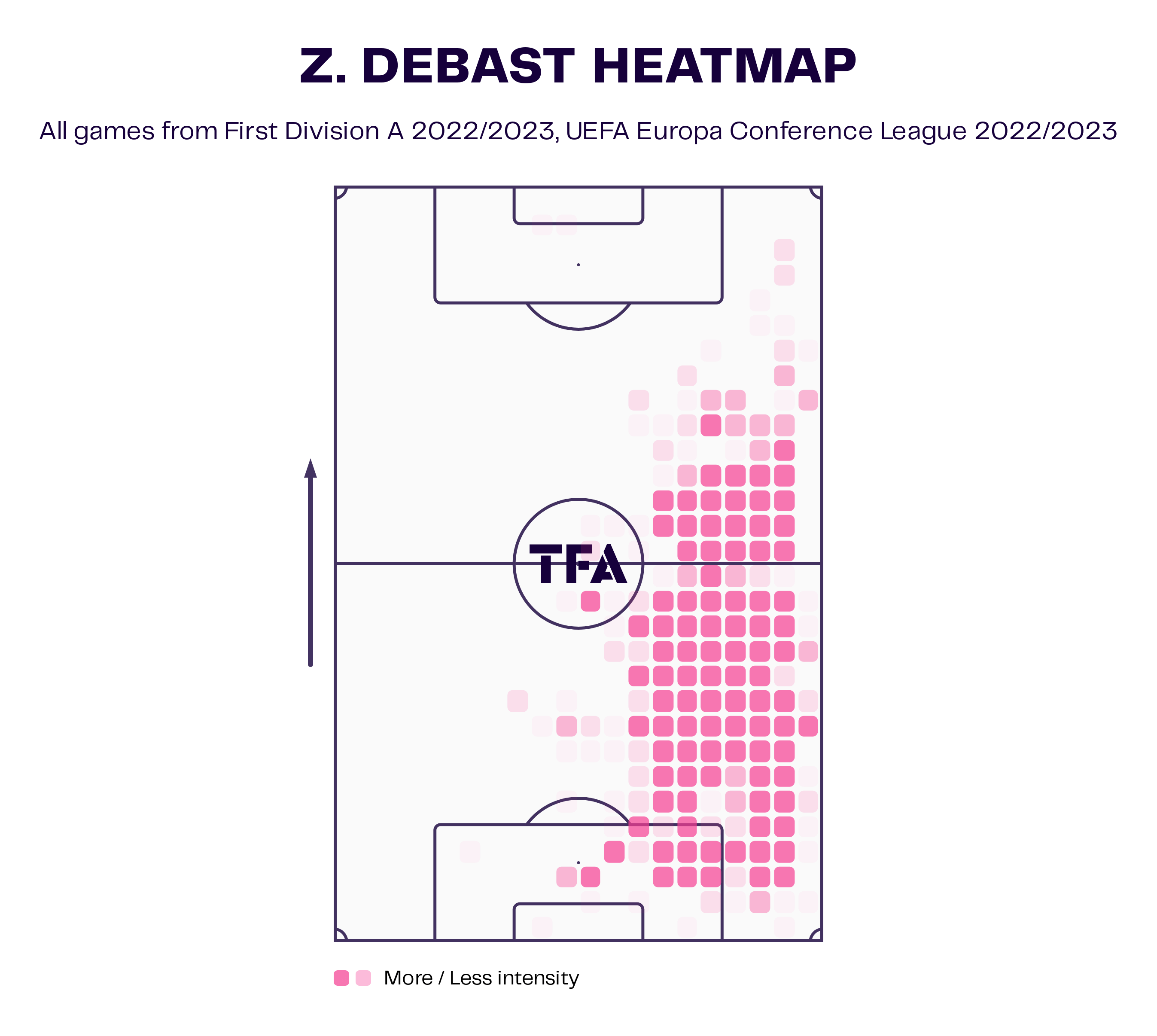 The heat map above shows the areas that Zeno Debast has been more prominently involved in this season under new manager Felice Mazzu. In Mazzu’s 3-5-2 system, Debast has more freedom as the right-sided centre-back to go forward, which is able to explain why he has plenty of involvement moving closer to the halfway line and even into the attacking third at some points this season.

These more forward runs are illustrated in some of the attacking metrics for Debast so far this season, with the young Belgian centre-back averaging 2.36 progressive runs per 90 minutes. This metric shows that Debast is given some freedom to get forward and drive into the opposition’s half with the ball at his feet, with him being arguably Anderlecht’s best defender when it comes to pass completion rates, especially into the final third to the attacker’s feet, or even in behind.

When it comes to taking a look at Zeno Debast’s strengths, his most prominent one is without a doubt his range of passing. In today’s game, most sides want to have centre-backs who are very good with the ball at their feet, and Debast is one of those. When glancing at Debast’s passing stats so far this season, the numbers are impressive. The young Belgian centre-back is averaging 52.25 passes per 90 minutes with a success rate of 89.2%. He also averages 8.86 long passes per 90 with an impressive 68.9% success rate. Finally, when it comes to Debast’s tendency to drive forward and pass into the final third, he averages 6.83 passes into the final third per 90, completing 75% of them. 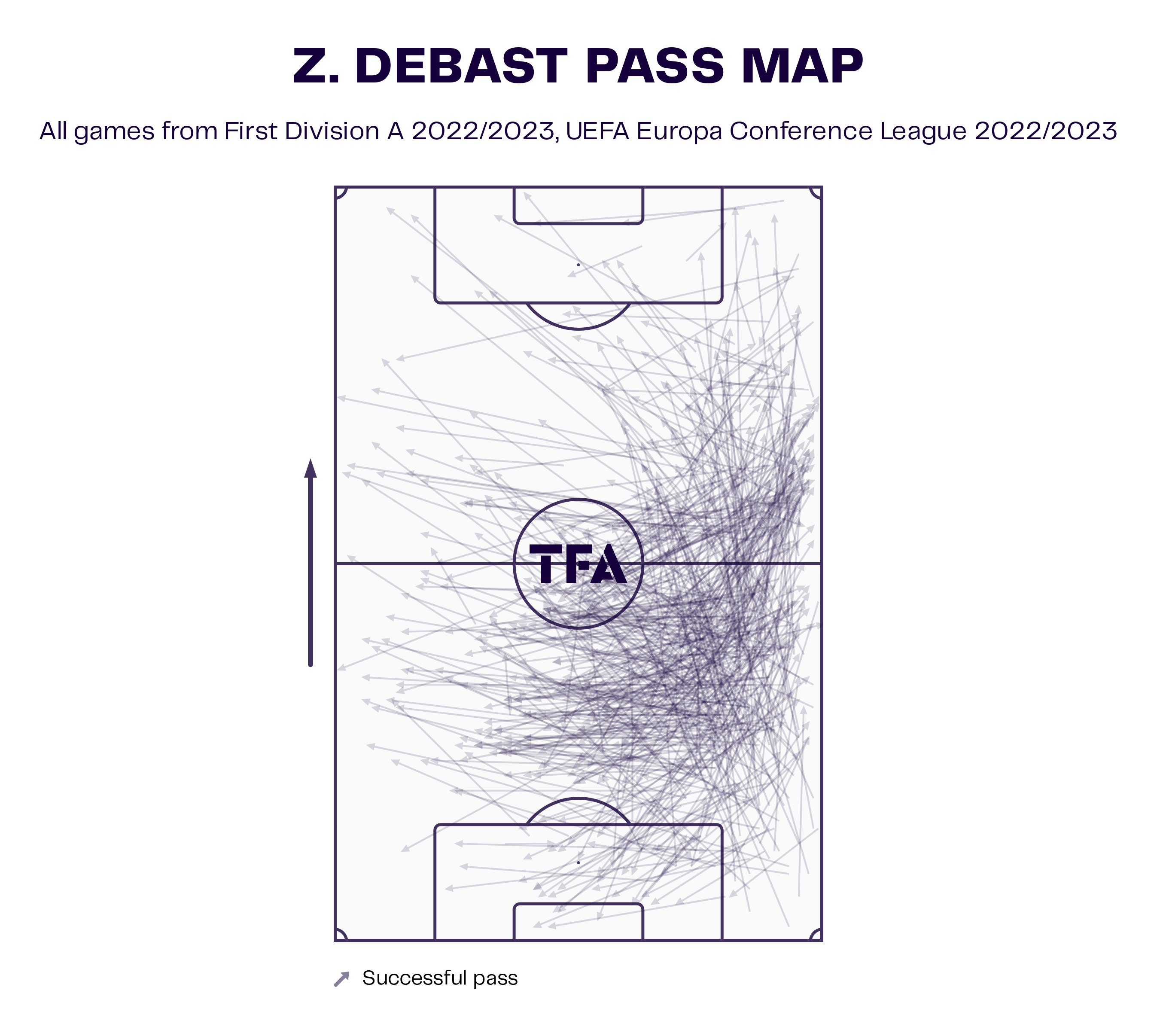 Above shows Zeno Debast’s passing map from this season, illustrating the areas of the pitch where the Belgian centre-back normally finds himself on the ball. Though a lot of his completed passes occur in the defensive to the middle third of the pitch, we can see that he also tends to play long passes into the final third, something that, as we mentioned, he is quite strong at. The following are some examples of Debast’s range of passing, and why it is so crucial to progressing the ball for this Anderlecht side. 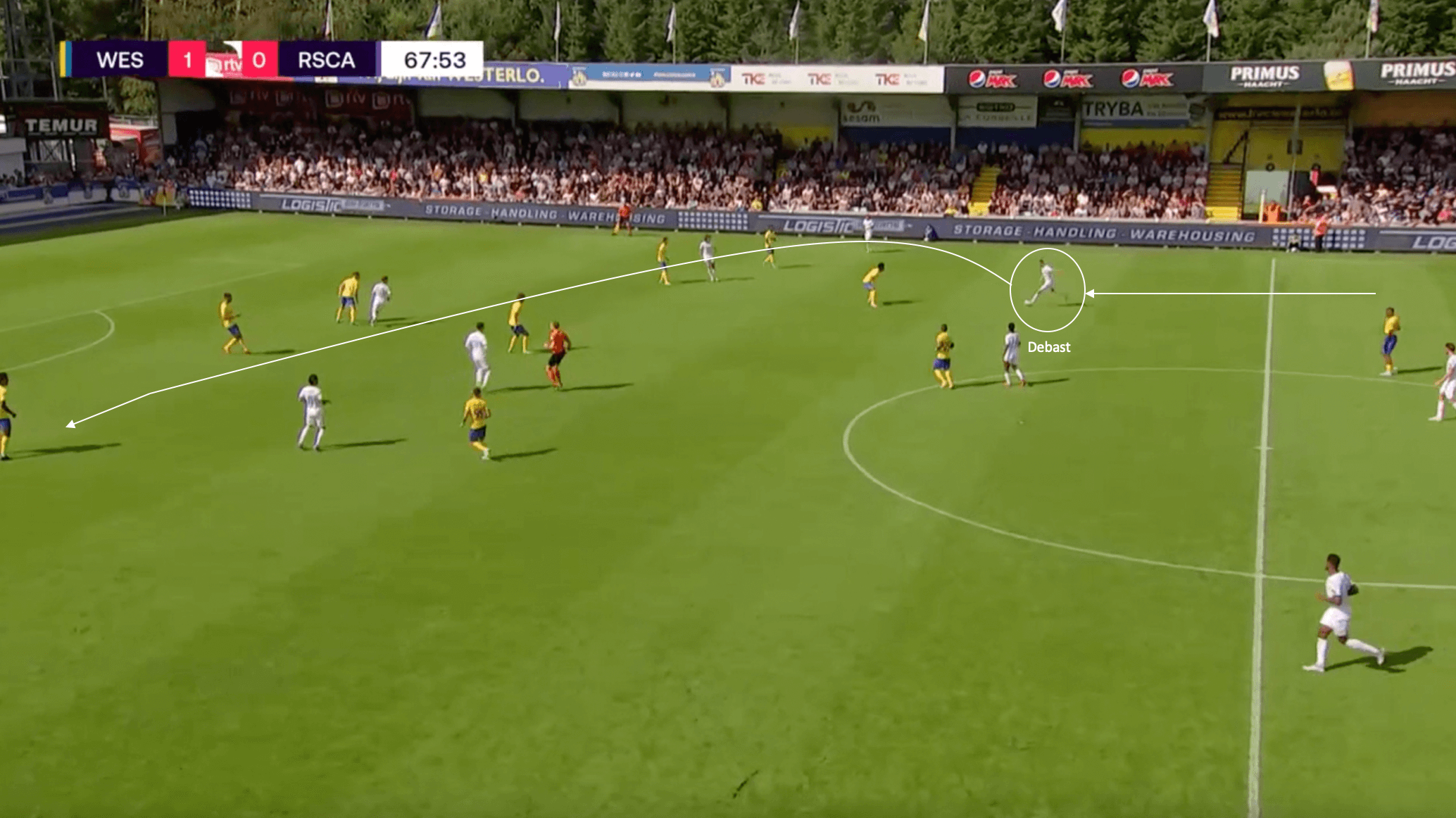 The image above shows an example of Debast’s long-range passing ability, along with his tendency to drive forward into the attacking half of the pitch. In this phase of play above against Westerlo, Debast has driven forward from his defensive position into the opposition’s half with the ball at his feet.

The young Belgian centre-back is then able to play a cross-field ball behind the Westerlo left-back and into the feet of the winger. This demonstrates what makes Debast such a threat for Anderlecht when in possession, with him able to break the opponent’s lines with ease as well as making these progressive runs into the attacking third. 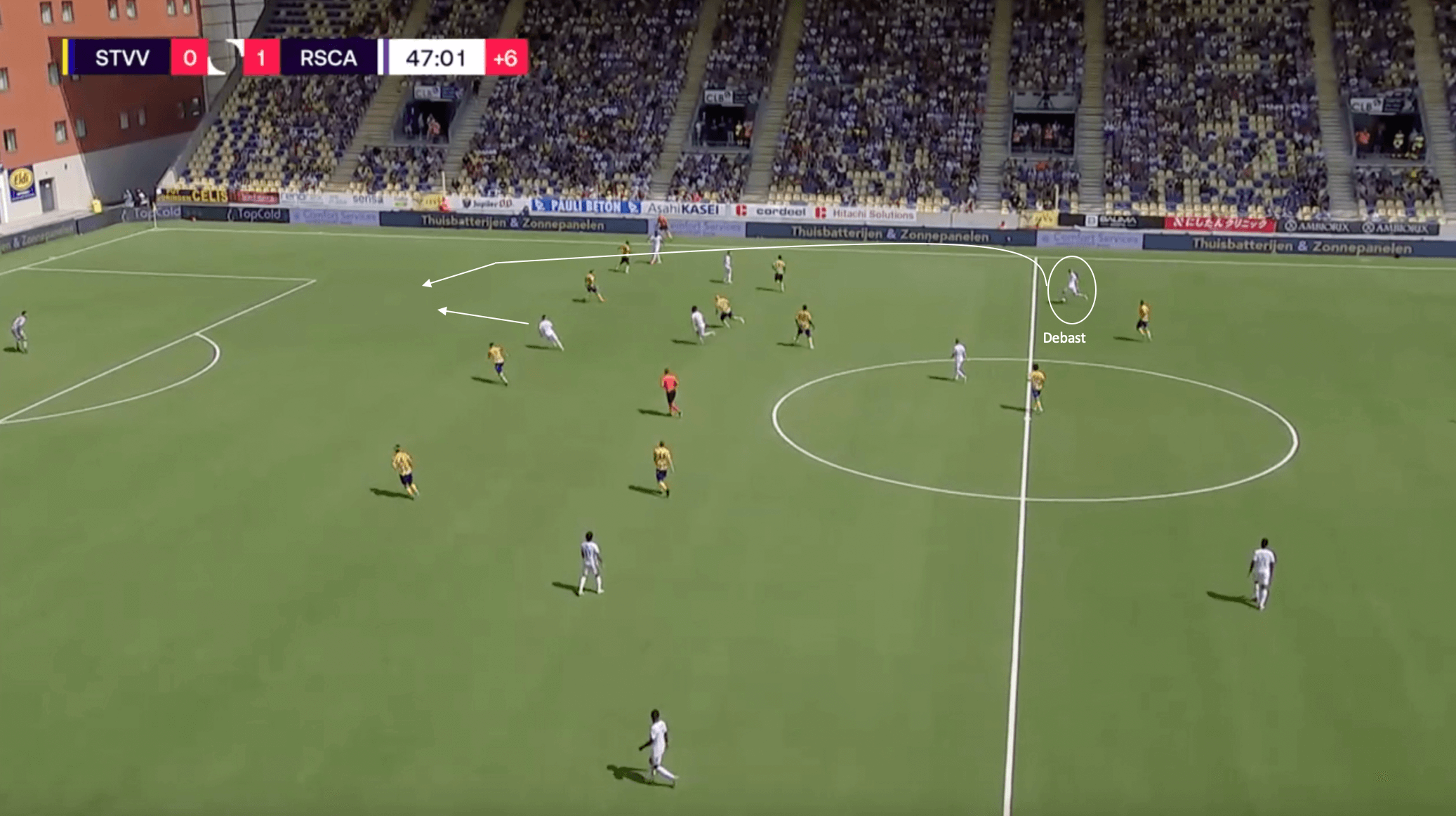 The image above shows another example of the line-breaking capabilities of Debast, as well as his ability to exploit a high defensive line. In the phase of play above, the young centre-back is in possession just inside his own half. He is able to scan and notice the forward making a run into the space behind the Sint-Truiden defensive line.

After spotting the run, Debast is able to bypass the Sint-Truiden midfield and defensive lines, playing the pass into the space behind for the striker to run onto. This pass causes a defensive breakdown for Sint-Truiden, with Anderlecht creating a goal-scoring chance as a result of Debast’s long passing ability. 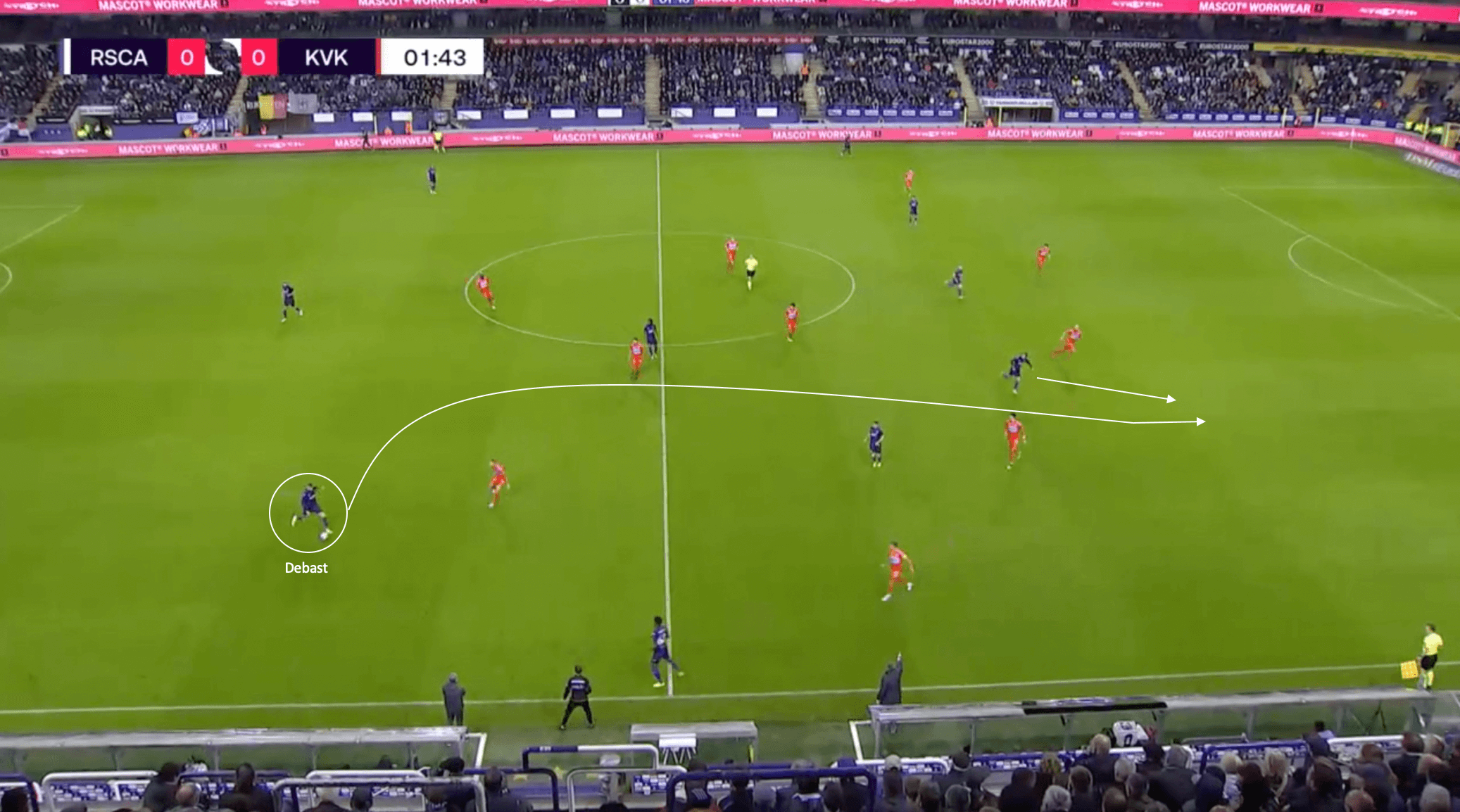 The above shows another example of the range of passing that Zeno Debast possesses. After receiving possession, the Belgian centre-back looks up and scans the field, looking for possible forward passing options. Wolves loanee Fabio Silva notices the space behind the opposition backline and runs into it, which Debast is able to spot. His ensuing pass is able to bypass every single opposition line, leaving Silva in a 1v1 against the Kortrijk centre-back. The forward is able to get past the defender, creating a chance for Anderlecht.

As this section has shown, Zeno Debast is arguably Anderlecht’s best ball-playing centre-half. When it comes to letting him play with the ball at his feet and making progressive runs forward, it would be a mistake for opposition defences to let him do that freely with the quality he possesses on the ball.

When it comes to his quality in defensive duels, Zeno Debast is a very capable defender in either 1v1 defensive moments, or transitional defending. So far this season in all competitions, the young centre-back is averaging 5.91 defensive duels per 90 minutes, with a success rate of 74.4%. These are impressive numbers for an 18-year-old central defender who only made his debut in the back half of last season. 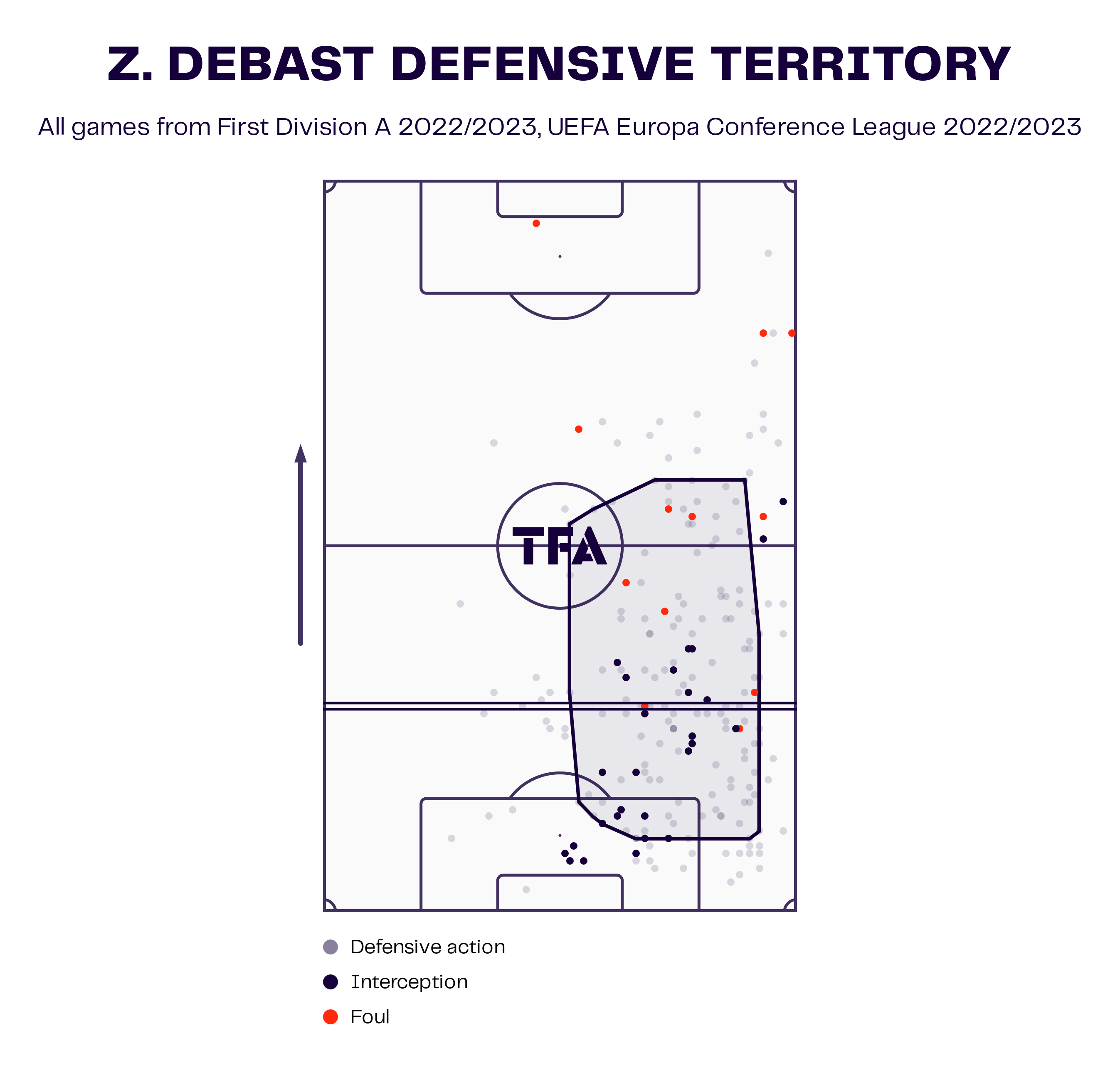 The above shows the defensive territory that the Belgian centre-back tends to find himself in during defensive moments. Notice how he is not a high fouler, with only seven red dots in his typical positions during defensive moments for Anderlecht. He also is big when it comes to defending inside the penalty box, with Debast making multiple interceptions and defensive actions in these high-danger areas. 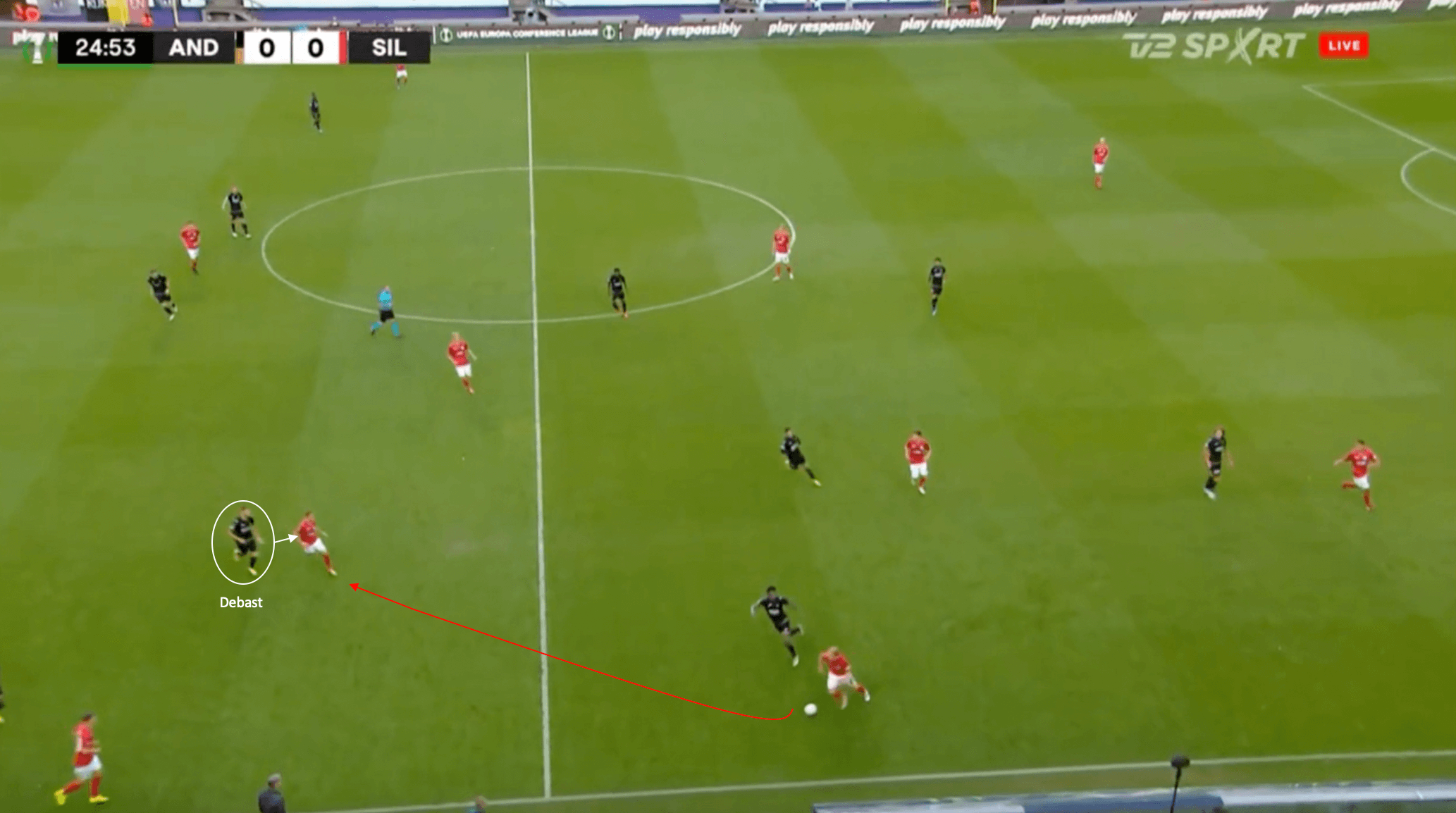 The image above shows an example of one reason why Debast is strong in defensive duels, his anticipation. In the phase of play above, Debast steps out of the back five to put pressure on the opposition forward who has dropped into the half-space to become an option to receive the pass from his teammate. This turns out to be great anticipation from the Belgian international centre-back, as his presence and closing down forces the forwards touch to be an errant one, which sends the ball out of play for an Anderlecht throw-in.

Though this example does not demonstrate a bone-crunching, aggressive tackle from the centre-back, it is able to show that his anticipation and quick reaction time makes him tough to beat at times from a defensive standpoint. 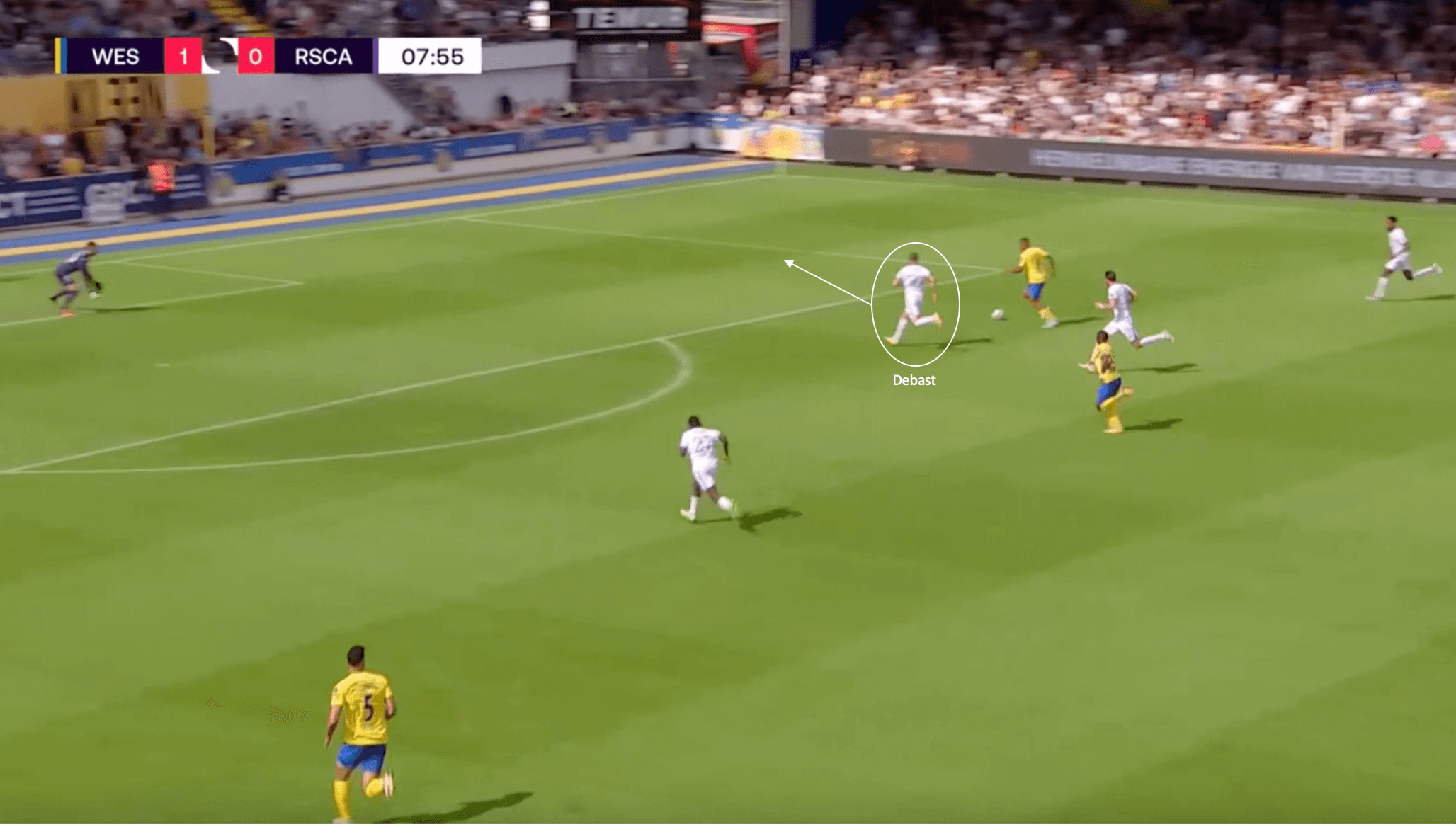 The image above shows another example of Zeno Debast in the defensive phase, this time making a recovery to stop a shot on goal. In this phase of play against Westerlo, the Anderlecht defence was broken down, allowing the attacker to get a free run onto goal. However, Debast is able to get back quick enough to get into the forward’s path, blocking the shot and preventing a probable goal for Westerlo. 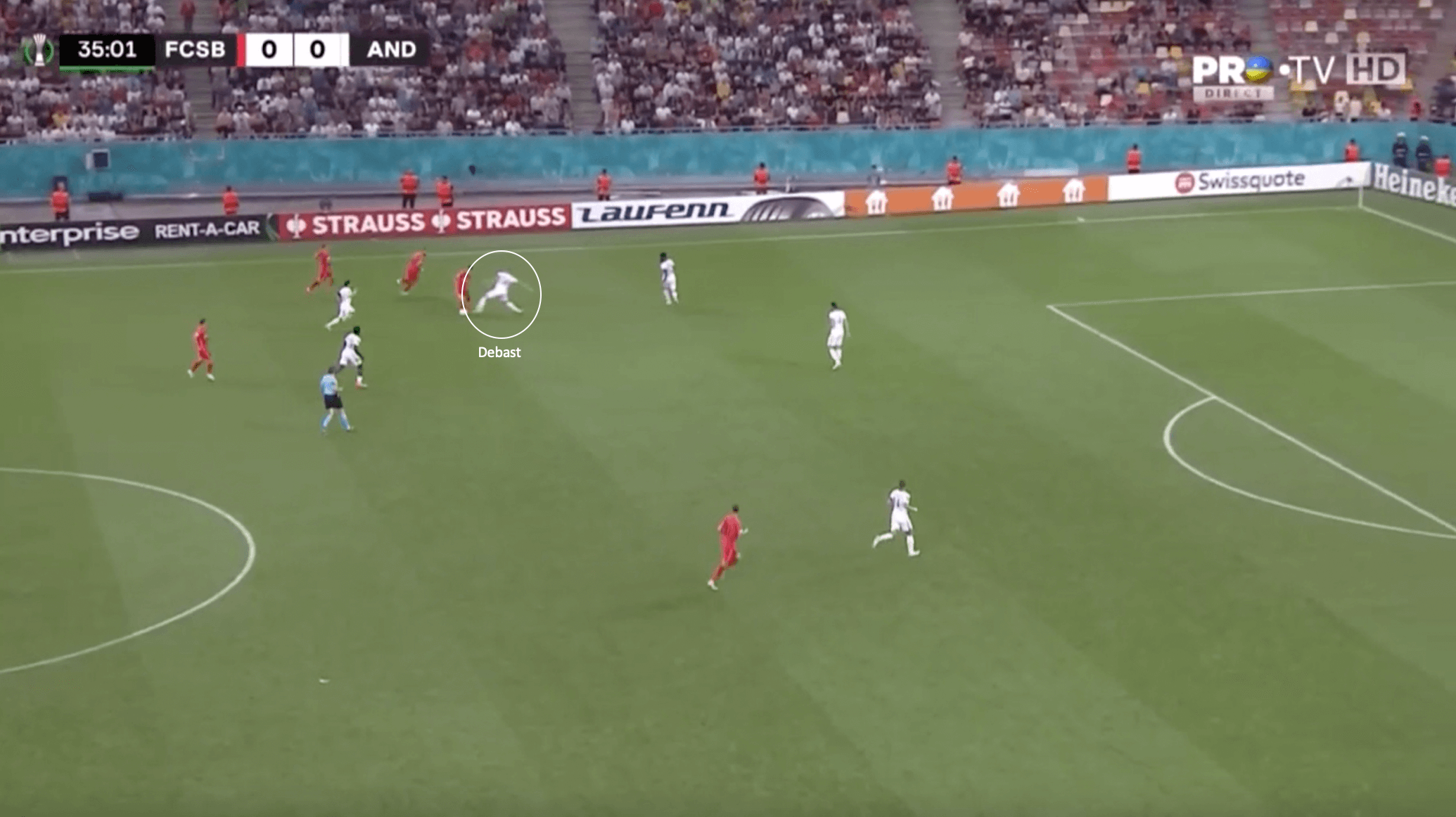 Another defensive aspect of Debast’s game is that he is strong in his ability to 1v1 defend in space. In the phase of play above, Debast stepped out of the backline to engage with the ball carrier in a 1v1 situation. In this defensive phase, Debast was able to stand his ground and make himself bigger, making it hard for the attacking player to be able to get past him. He then was able to stick his long leg out to win possession of the ball back, eliminating any possible attacking danger.

Zeno Debast has a great defensive skill set to excel in Felice Mazzu’s tactics. With a back three system, the Belgian centre-back is able to step out of the backline if he needs to and still have the defensive cover going back. While there is still some refining that could be done with the defensive side of his game, it is still very strong for an 18-year-old.

As this tactical analysis and scout report piece has shown, the meteoric rise of Zeno Debast has been for good reason. The young Belgian centre-back is a very big talent inside of Belgian football right now, and it would not be surprising to start and see bigger European clubs start to circle. While this is not to say that a club the stature of Liverpool would come in for him next summer, the future is definitely bright for Zeno Debast both at club and international level. 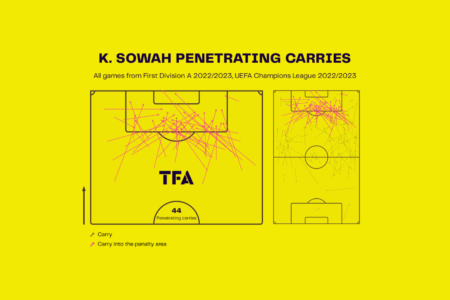 As the greatest tournament in world sporting competitions has begun, now would be a great time to have a quick […] 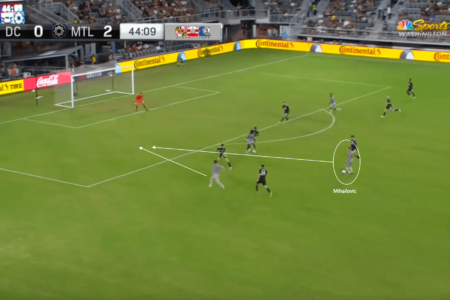 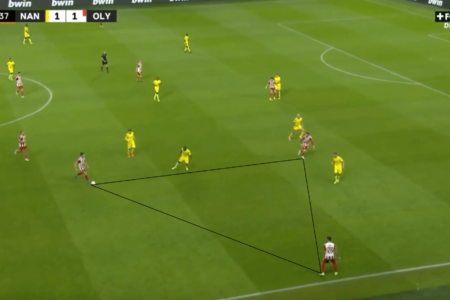