Yan Couto is the latest Manchester City signing! €6m might not be a high transfer fee to many clubs, especially the City Football Group. However, not many 17-year-old youngsters carry that price tag either (€6m, potentially rising to €12m).

Thanks to his sharp performances in the FIFA U17 World Cup, Yan Couto was wanted by many clubs – Chelsea, Barcelona, and of course, City.

“I had a good conversation with Barcelona and I thought I would go there, but then Manchester City appeared and showed me how things would be there.” – Couto

After meeting Pep Guardiola, the current City manager, Couto was guaranteed a place in the preseason squad to impress the coach. So, why is he such a hot prospect, regarded as the ‘new Dani Alves’?

In this tactical analysis, we will cover the strengths of Couto, and why he is a perfect fit for City’s tactics and footballing philosophy.

Born in Curitiba, Brazil in 2002, Couto turned 18  last week. He has been growing at Coritiba academy system. In the new calendar year, the Brazilian was promoted to the first team, playing his only two professional games in the Campeonato Paranaense.

Couto is a right-back. The below heat map summarises his action zones on the field – mainly operating on the right flank. It is very clear that Couto has an offensive mindset, as his actions were evenly split between both halves.

Apart from deploying as a right-back, Couto’s attacking ability and energetic displays also helped him to survive in a back three system – as a right wing-back. Or, when a pivot dropped aside from the centre-backs, Couto was often pushed forward.

Couto has good ball-passing technique, therefore, he always tries to play an in-ball to find players at the centre. This was conducive to the sustainability of an attack, as the receiver would have a positional superiority, it means having more options and angles for a pass.

In this example, average right-backs would play the vertical pass or a long ball, as these options were visible and easy. However, Couto was different, despite under pressure, he still passed to the centre. As I have mentioned, the receiver has the positional superiority to further progress. On the contrary, if he chose the normal route, then the ball was trapped in the wide areas and the Brazil U17 team would find it harder to progress up the pitch.

This trait is important in a team that looks to play out from the back. Usually, teams attacking from positional plays were trying to generate superiorities. Couto’s in-ball plays would make any team he features in better at breaking the press. 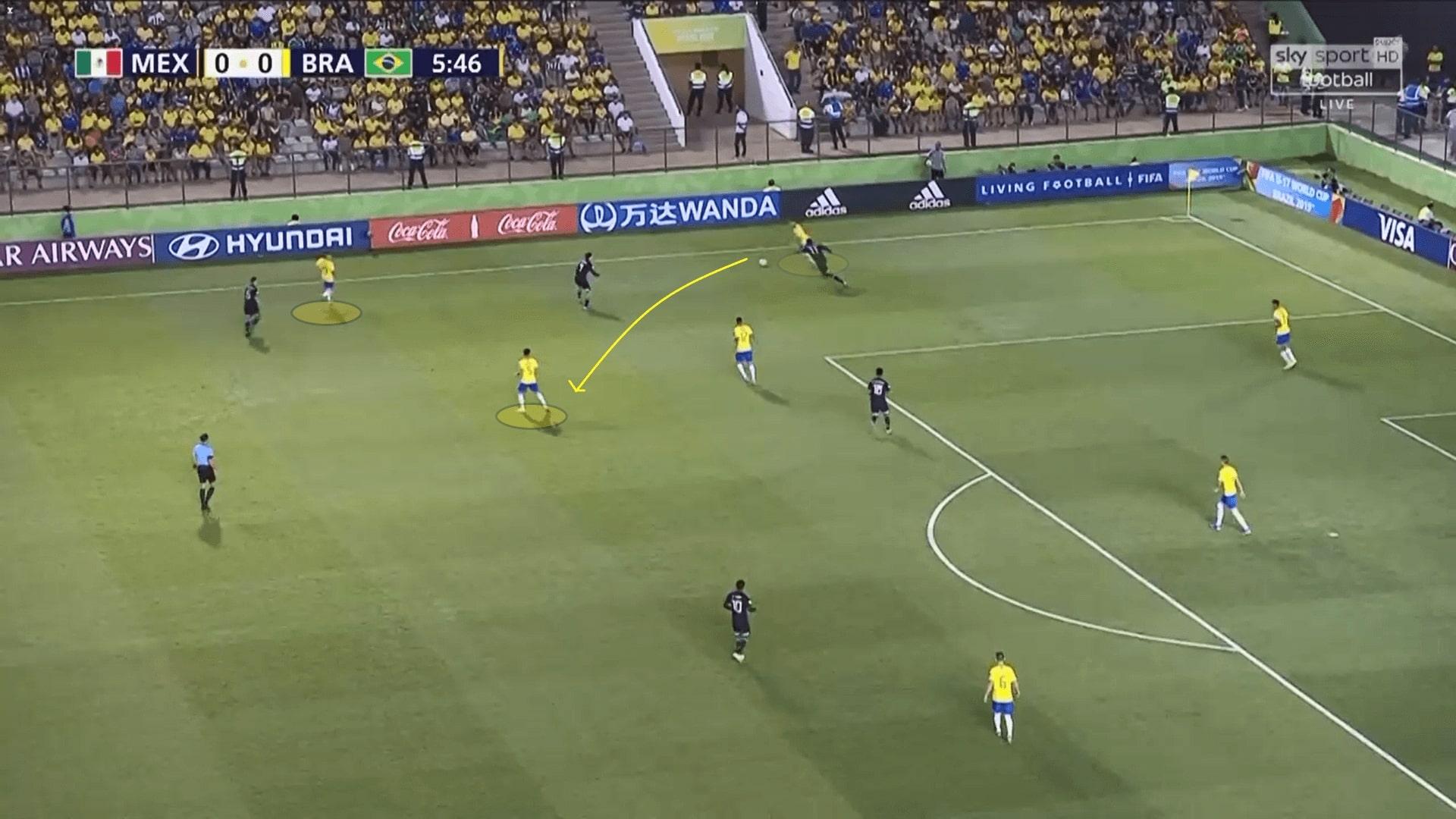 In the final third, Couto is keen to run behind the defence. Since the Brazilian is a very pacey player, he begins his runs from deep, and this is very likely to get rid of the marker.

A good way to find Couto’s run is a through pass, as illustrated in the image below. Although it appears that the ball was going to drop too far away from him, Couto was quick enough to get to it..

After reaching zone 18, Couto tends to cross or find a teammate in the half-spaces. In the FIFA U17 World Cup, Couto had 4.08 crosses per 90, ranked fifth in the competition and it shows how he contribute offensively. 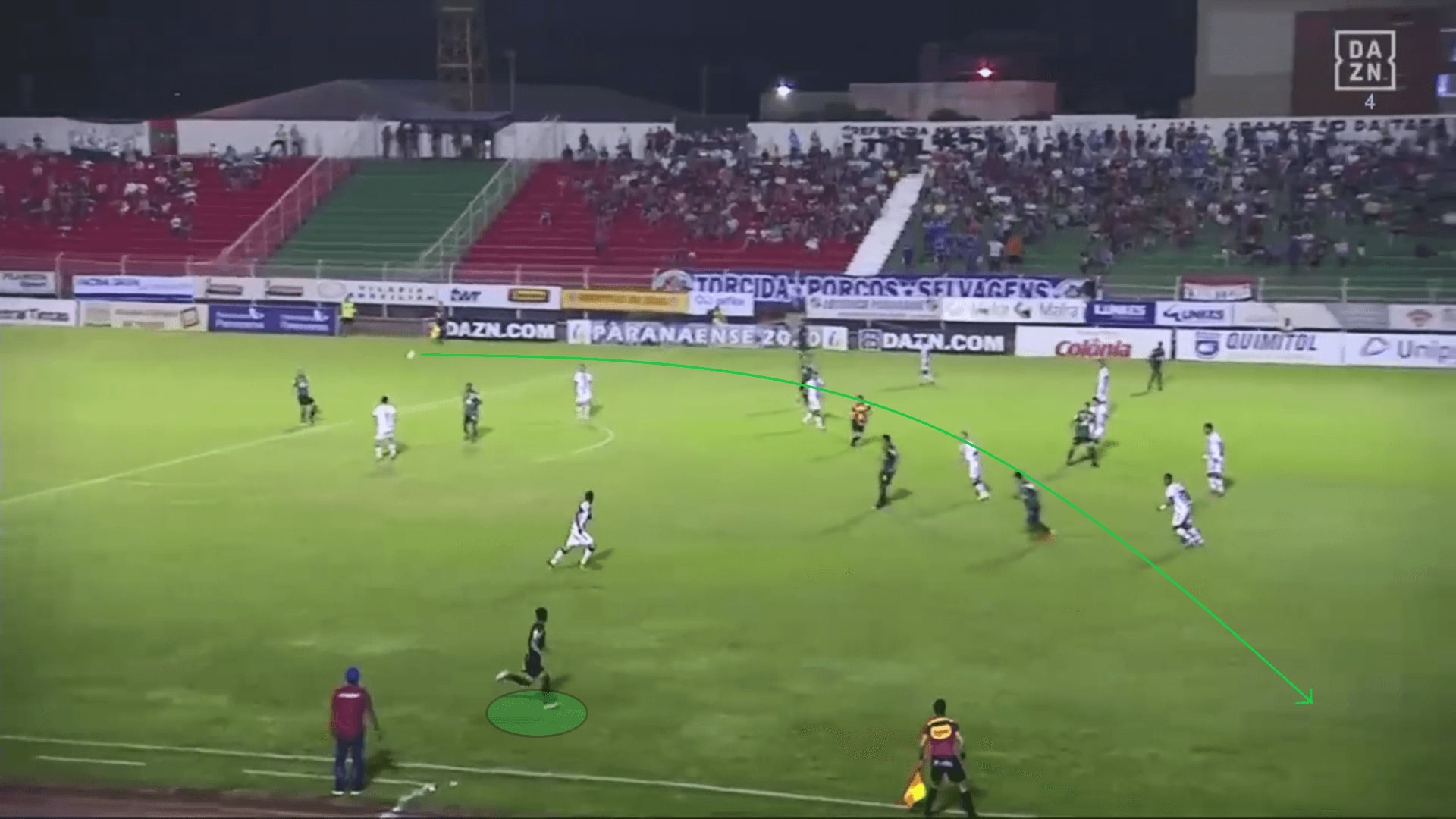 Crossing is the strongest trait of Couto and he uses it wisely. His crosses are not gambles, he often crosses after perceiving and anticipating the runs of teammates. Therefore, his career crossing success is 40% according to Wyscout, which is rather high.

The below example shows his understanding of the game and it relates to crossing. In this crossing opportunity, two runners are potentially available. Instead of playing to the nearer player, Couto whipped his cross to the space behind the first option – where the second runner was totally free to shoot, an intelligent cross. We believe Couto anticipated how the first run took the defender away and created space to exploit, and the technique allowed him to execute this idea. 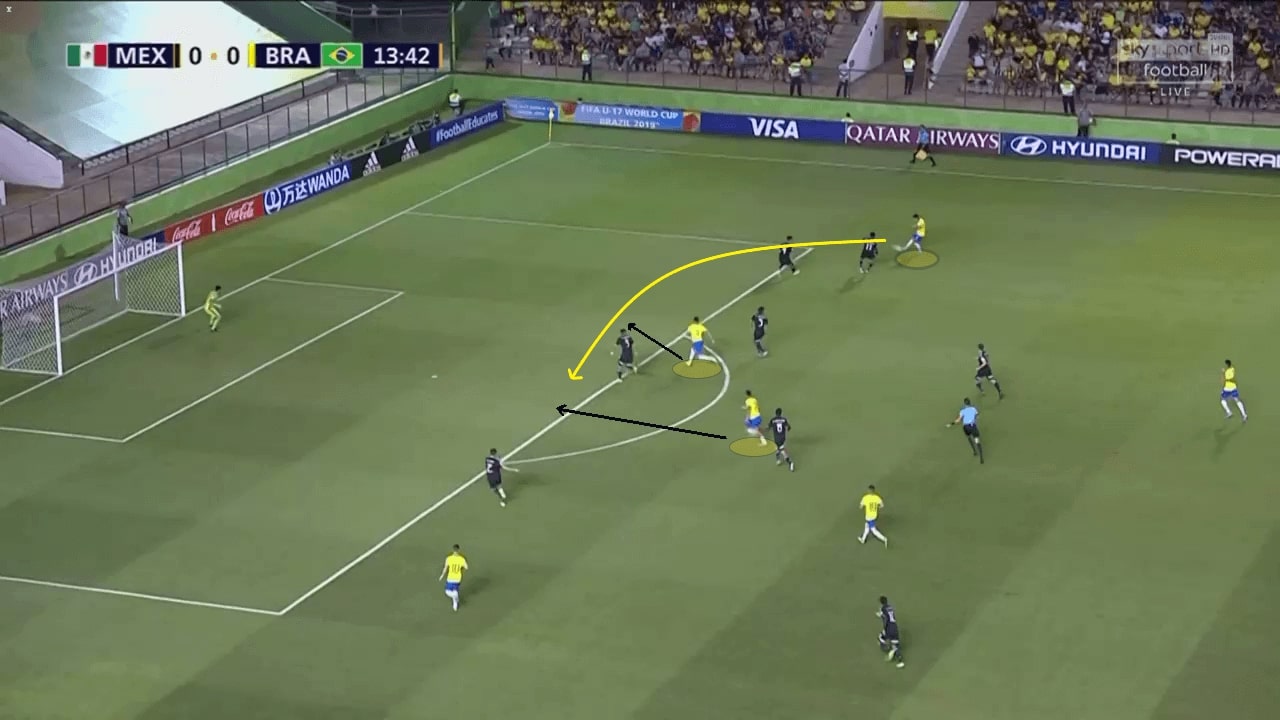 Couto has demonstrated that he is an excellent crosser, which reminds us of Kevin De Bruyne. His crosses spin so much that he always avoids a block when opposition come to stop him.

As a reference, the opponent was very close to him in the images above and below. However, none of the crosses were blocked since the spin of the crosses kept the ball away from the approaching player initially, but dropping to the target at the end.

The below cross was impressive – not only did the defender fail to block it, but the cross also surpassed four players and was only cleared by the last defender. 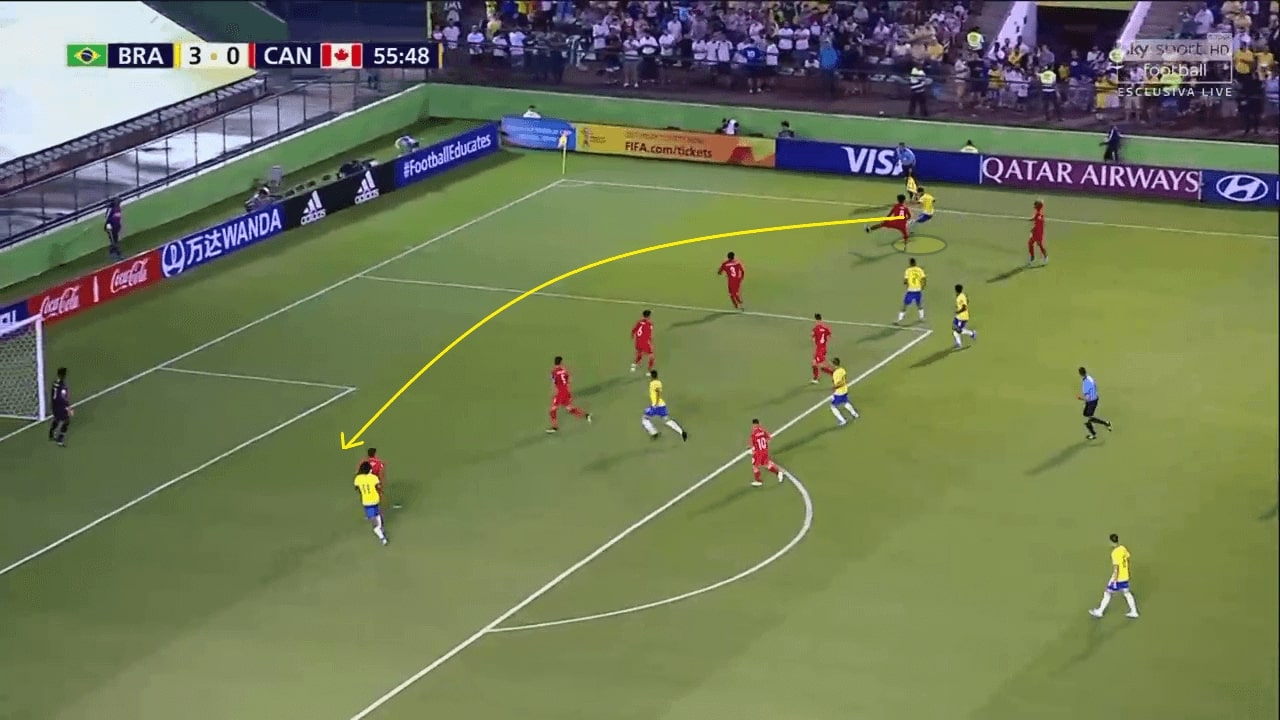 At City, the offensive requirements of the full-backs vary under the coach. But, assuming they continue to play attacking football, having such an offensive right-back is always conducive. Since Couto could also operate in the half-spaces, the winger could flexibly rotate with him or roam his position, hence, the attacking movements are unpredictable.

Couto is also keen to collaborate with his teammates in the wide areas – playing a one-two, in-balls and trying all sorts of combinations to progress.

Apart from the offensive outputs in positional plays as explained above, Couto is also an excellent ball progressor in the transition phases. Remember, he is very quick, hence, carrying the ball forward is a big strength of him.

His all-rounded ball progressing ability is illustrated in this ball progression graph from Wyscout. As you can see, not only did Couto provide progressive passes (9.18 per 90), he also had quite a lot of progressive runs (3.42 per 90).

Also, you could look at the distance he travelled when carrying the ball. As we have highlighted, almost half of the progressive runs occur at the half-spaces, and the runs in this zone are the largest distance.

Firstly, we look at how his passes contributed to the offensive transitions. In the below image, Coritiba had two players on the right and most of the Toledo players were on the ball side. These options were clearly visible for a pass.

However, Couto tried something better, by finding the player on the far side, he created a 1 v 1 opportunity for his teammate. All of these could be attributed to his bold action – passing to the weak side even though the passing lane was narrow. 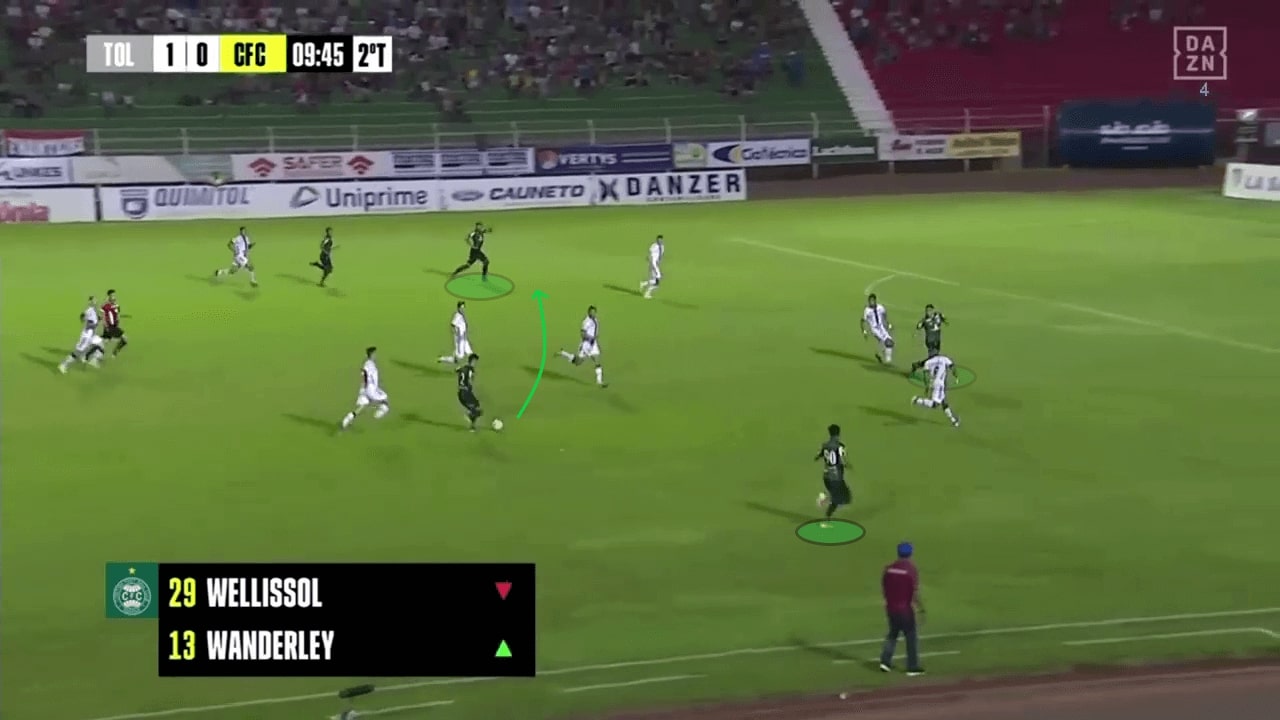 Couto utilised his pace when dribbling. He could dribble diagonally to open passing lanes and absorb pressure, freeing the wide corridor for a wide player. Even carrying the ball in a high speed, Couto seldom kept his head down. Instead, he often looked for a passing option.

You could see Couto was receiving a layoff from his teammate in an offensive transition. Couto’s good first touch helped him to escape from the player behind the passer.

Note that there were two white shirts in the central circle. 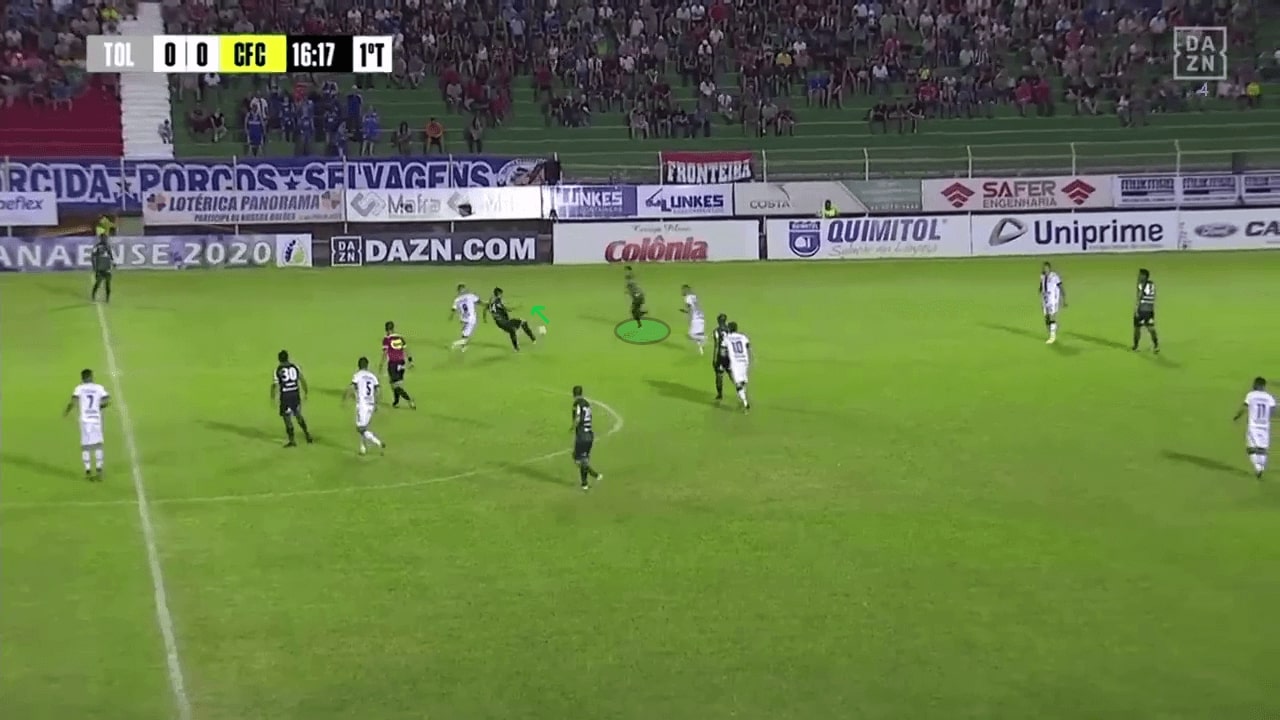 The pace of Couto was incredible. By carrying the ball through the half-spaces, he put seven opponents behind him. Furthermore, his speed meant a defender had to come out and stop him, this opened the passing lane and made the player on the right free. 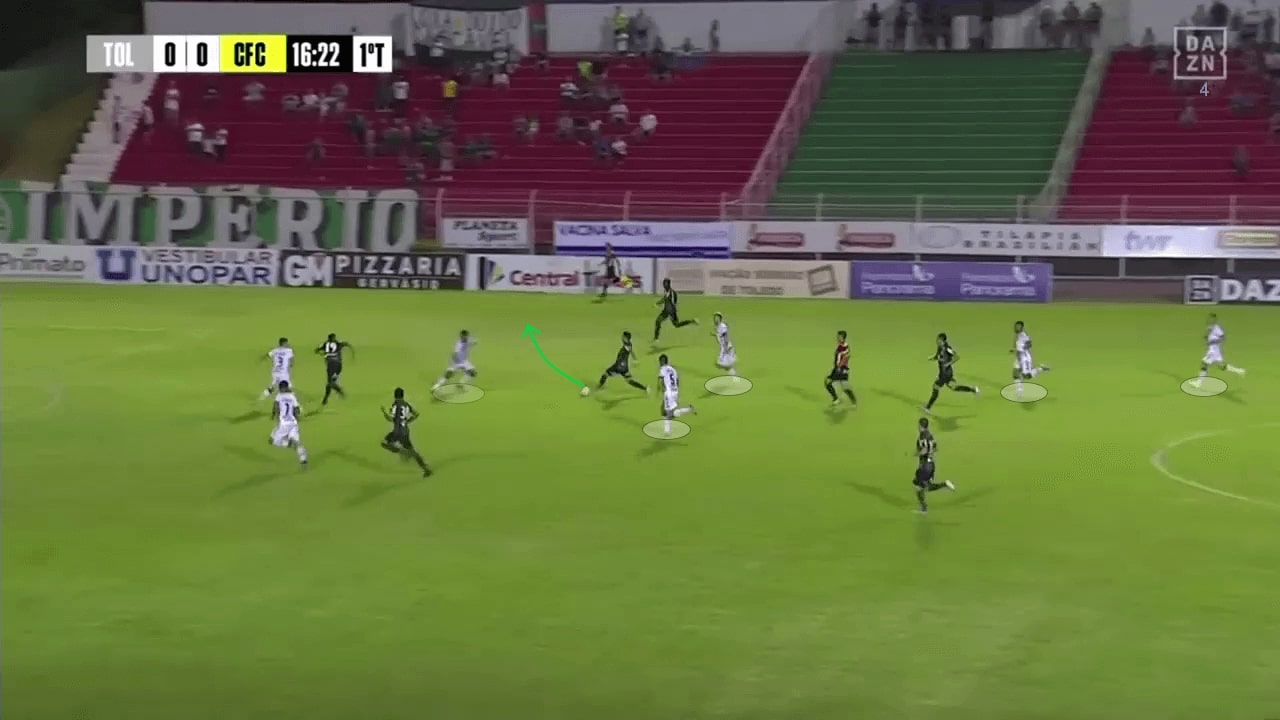 In the defensive transitions, Couto utilises his pace to track runs and cover spaces behind him. What has impressed me was his defensive skills, which we will explain below.

Couto physical qualities are not muscular or body strength, but exceptional coordination, balance, agility and softness. Also, the 18-year-old has a strong mentality which helps him to stay calm in 1 v 1 situation even when he is isolated. Combining all these elements makes Couto a great asset to a team that plays with a high line.

We choose a set of examples that has demonstrated all his above strengths. In the FIFA U17 World Cup Final, Couto had to deal with the Mexican winger at times, and he handled the ball carrier excellently and always regained possession.

In the first image, you could see the opponent was charging forward, Couto stepped up without defensive cover. As we circled, he was defending a large area. However, you could see the body orientation of Couto, which limited the options of the winger and forced him to take the ball to his weak side.

Couto did very well in terms of closing the ball carriers space, therefore, in the second image, you could see the winger was forced to drift forward.

This was not an easy case though– here comes another challenge: the winger used his body and his right foot to separate the ball and Couto. Therefore, reckless challenge will unoubtedly result in a foul.

In this scenario, Couto is calm and did not make any defensive action. He continued sticking to the winger tightly, utilising his only advantage: the ball was on the winger’s weak side. 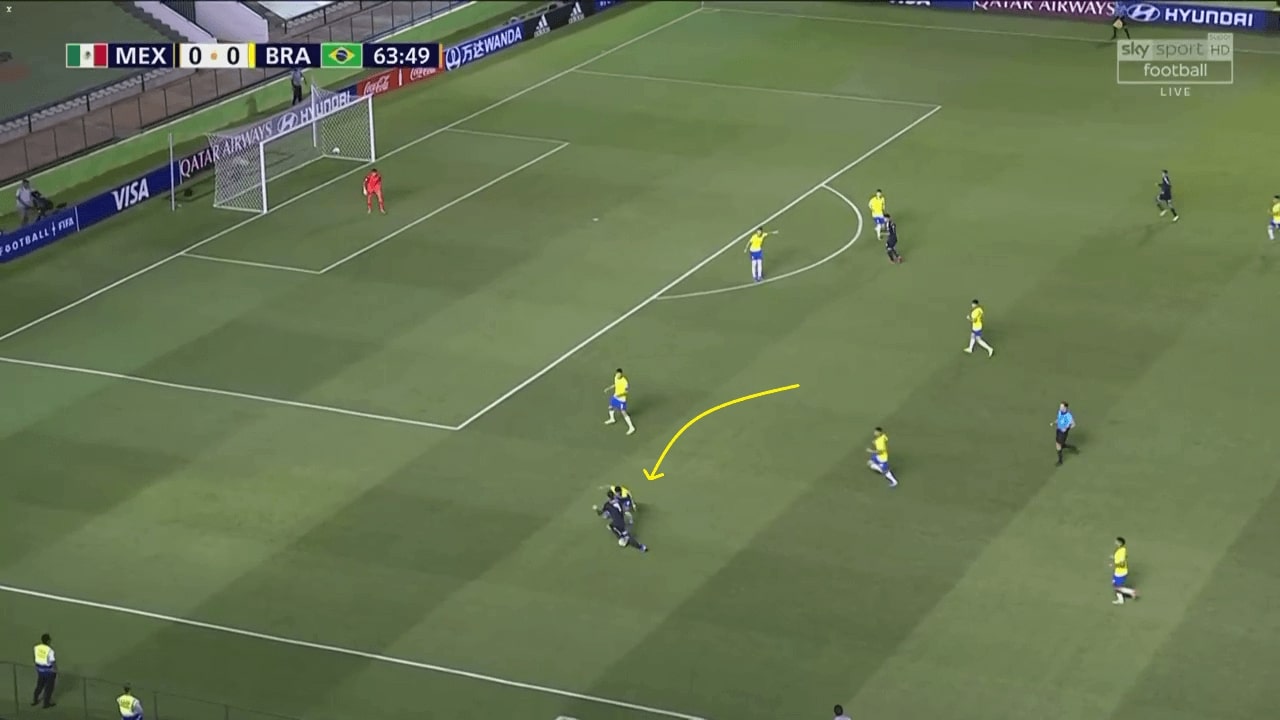 At last, the winger tried to take the initiative by shifting the ball back to his right-foot – a move that made him lose balance. This was the time to take the ball!

You could see the ball was no longer separated by the winger’s foot and body, he placed it right in front of Couto. Also, note how quickly the right-back has switched his direction and adjusted his body angle. When the opportunity came, Couto did not hesitate and put in a strong challenge to win the ball.

This was an impressive case as the winger has tried to use different methods to dribble past Couto – but all of them were nullified by the right-back’s defensive action. Thanks to the physical superiority and strong mentality as mentioned, Couto could do the above set of defensive actions well. 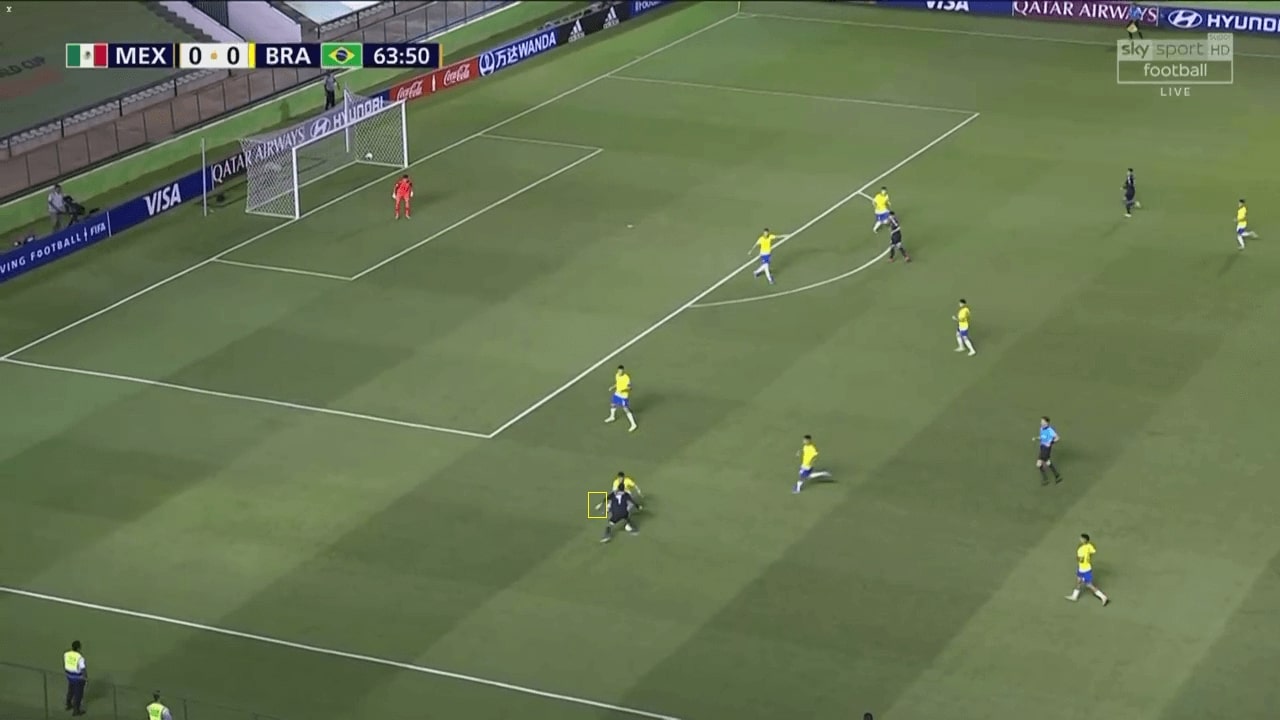 Another feature of Couto’s defensive abilities is his tackles. Since is not that tall at the moment (169 cm according to Transfermarkt), he has to stick his legs out to reach the ball. With his pace, he usually gets  the ball but sometimes the timing is not right and the attacking player can escape from Couto. This is a flaw of his individual defence.

After going through all the strengths of Couto in this analysis, it was intriguing to see how the right-back could develop in the future. Firstly, Couto has to improve his physical strengths – especially the upper part of his body to adapt to the professional level. Playing in the Premier League would be intense and possibly involving a lot of duels, Couto has to be ready for it.

We would also focus on his excellent passing skills. Since the Brazilian is technically gifted to play spinning balls, mingling this strength when playing through passes and long passes would make it difficult for opposing defenders to anticipate. This could be useful when breaking the press or finding runners high up the field.

And lastly, remember the excellence of Trent Alexander-Arnold, who executes freekicks and corners brilliantly. Couto has the potential to be a set-piece taker, as long as he keeps delivering these excellent balls, the team would gain an even bigger advantage when rewarded a set-piece.

As we have shown in this scout report, Couto and City’s philosophy matched perfectly – an offensive mindset, strong at crossing, excellent in 1 v 1 defence. No wonder Guardiola met with him to make sure he signed on the dotted line to become a City player. It will be exciting to see how Couto performs in the preseason games!