As the European seasons draw to a close, the summer transfer window looms into view once again. One player who looks destined to make a move this year is Deportivo Cali’s Nicolas Benedetti, who has arguably been the best young player in Colombia for the last 18 months.

A youth product from the excellent Cali academy, Benedetti recently turned 21 but has already clocked up well over 100 games for his hometown club, scoring 21 goals in the process. The classy, dynamic playmaker helped Los Verdiblancos to the 2015 Apertura and since then has developed in the creative hub of his side.

But it could have all been different had it not been for a sliding doors moment when he was just a child. An extremely keen cyclist, Benedetti suffered an accident when he was four years old while out riding his bike. He collided with a traffic control policeman and went face first into the pavement, losing three teeth. As a result, his father, a former professional in the ’70s, enrolled him into a football school and Benedetti Jnr never looked back.

Benedetti impressed with his speed, technique and vision and began gaining recognition, winning the Rey Pele and being named the revelation of the 2009 Copa Disney in Brazil. He went on to make his first team debut for Cali in July 2015 , making an immediate impact to come off the bench to the net the winner against La Equidad.

Nicknamed ‘The Poet’ for his style of play and the fact he shares a surname with celebrated Uruguayan literary figure Mario Benedetti, Nicolas looks to be the next off the Cali production line that has unearthed the likes of Oscar Cordoba, Luis Muriel and Jeison Murillo to name but a few.

In true number 10 fashion, Benedetti excels at slipping eye-of-the-needle passes through the smallest of gaps in the defence. Not only does he possess the creativity and vision to weigh up improbable angles, he also then has the technique, ability and confidence to execute the killer pass and set-up goal-scoring opportunities for his teammates.

Here we see a classic example of Benedetti breaking the lines of play with his defence splitting passes. 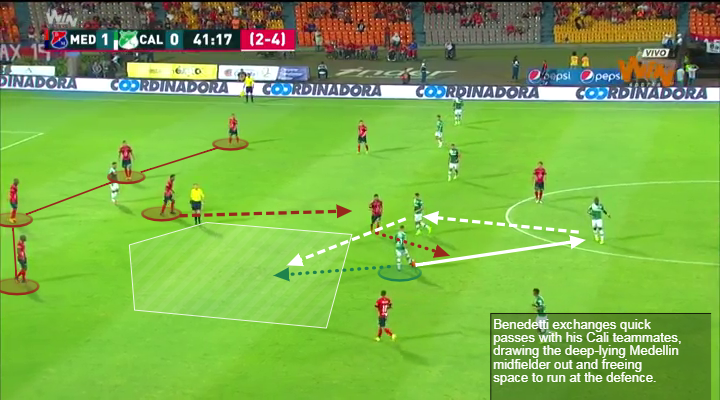 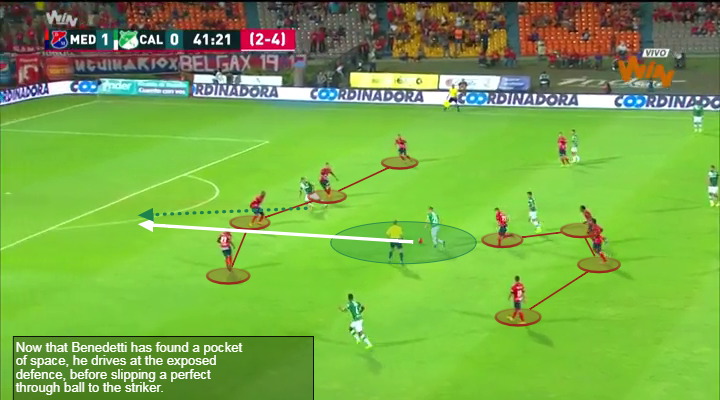 It’s not just his ability to find space between the lines and then assist teammates, but also the sheer range of through balls Benedetti is able to execute. Whether it be from deep or with his back to goal he can still find a way through the most organised of defences. 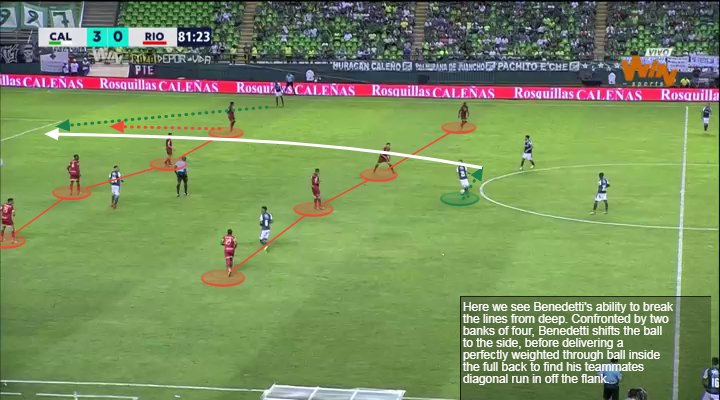 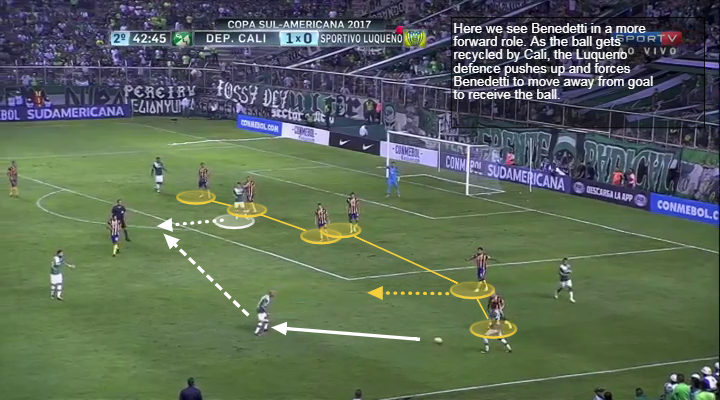 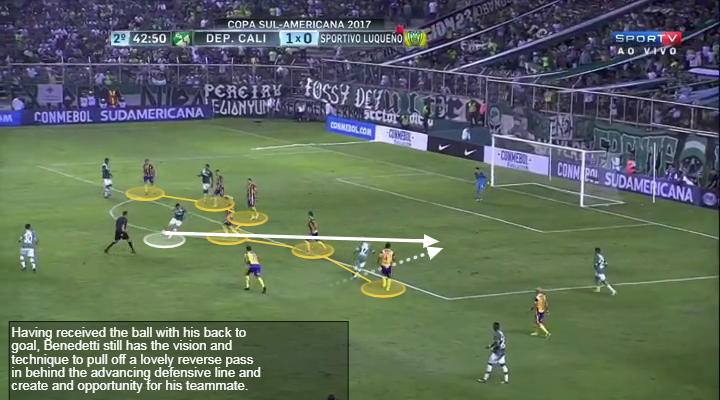 As well as laying on assists for others, Benedetti is also a goal threat himself. His great technique and his tendency to find pockets of space on the edge of the area mean that he likes to try his luck from range and has scored some spectacular efforts in his time. 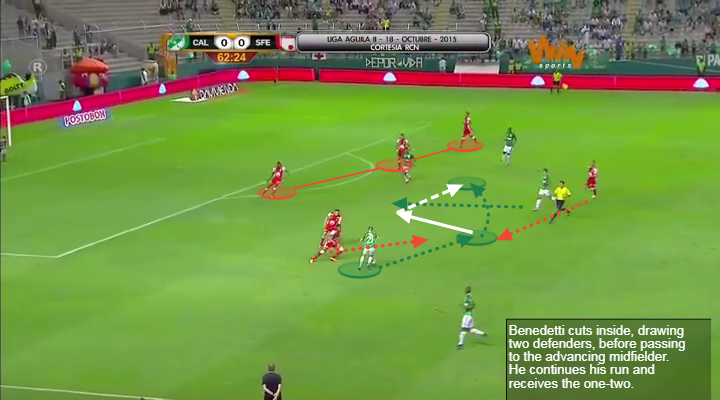 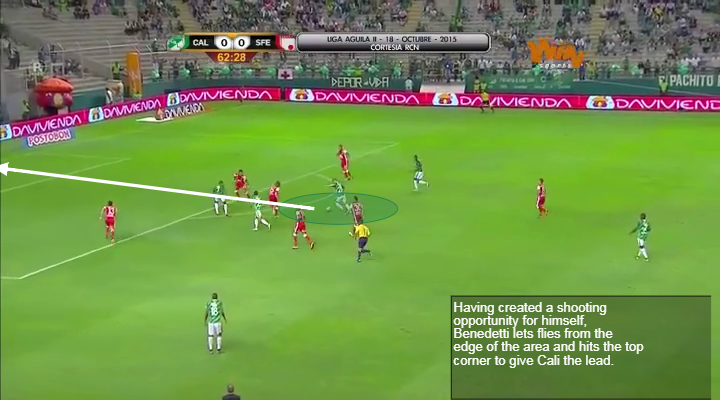 This long-range shooting also means he is dangerous from set piece attempts, whether they be direct or in-direct, such as the example below. 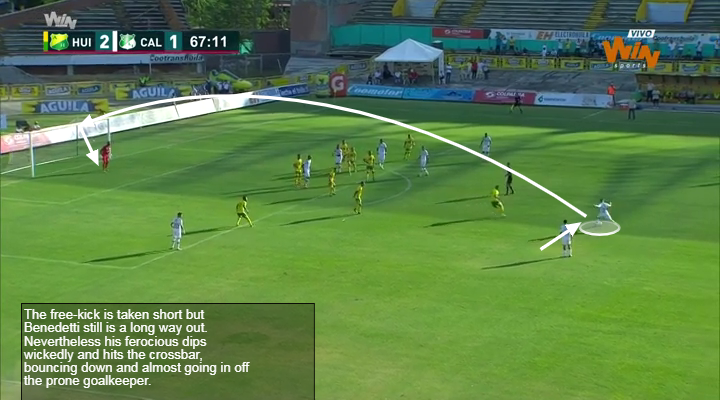 Benedetti is also able to operate just off a target man in a support striker role, thanks to his mobility, link up play and ability to time his runs into the box. 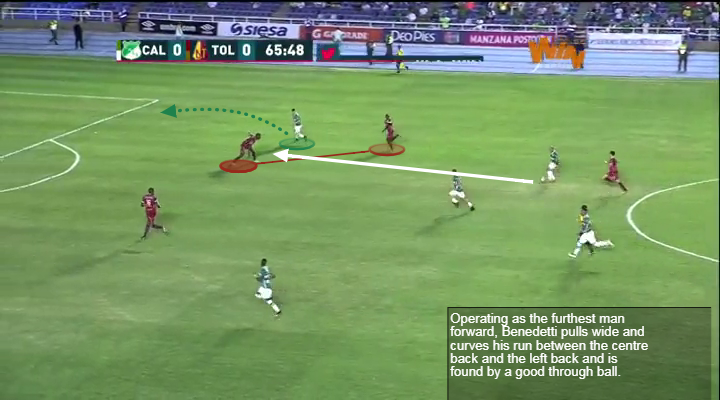 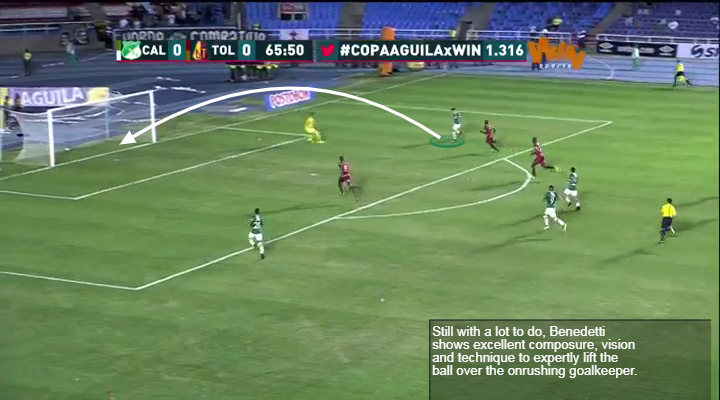 A ratio of 1 goal every 5 games is a decent record from midfield but there’s the feeling that Benedetti could still add more goals to his game. If he could break into double figures then he would really be an all-round attacking threat.

There is a rich seam of playmakers running through Colombia’s football history and great value is placed on the enganche. Whereas the likes of Carlos Valderrama, Macnelly Torres and Juan Fernando Quintero are more foot-on-the-ball playmakers, Benedetti’s dynamism and mobility is more akin to that of James Rodriguez.

In that respect Benedetti seems more of a modern attacking midfielder, capable of running with the ball, going past players with his pace and trickery and drifting all over the pitch. 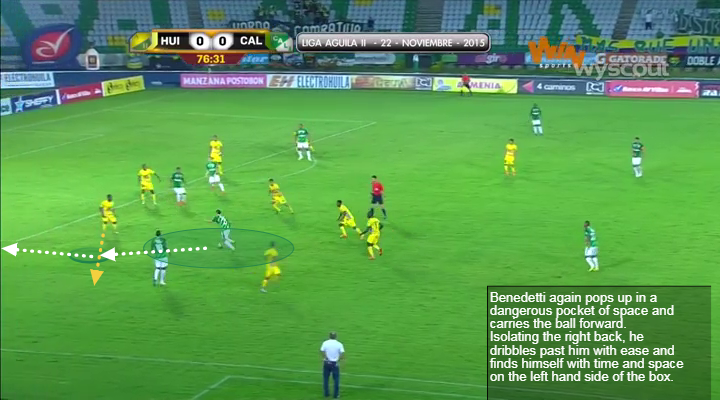 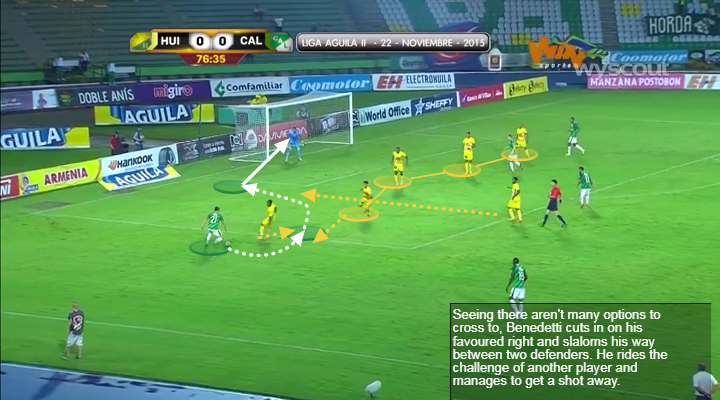 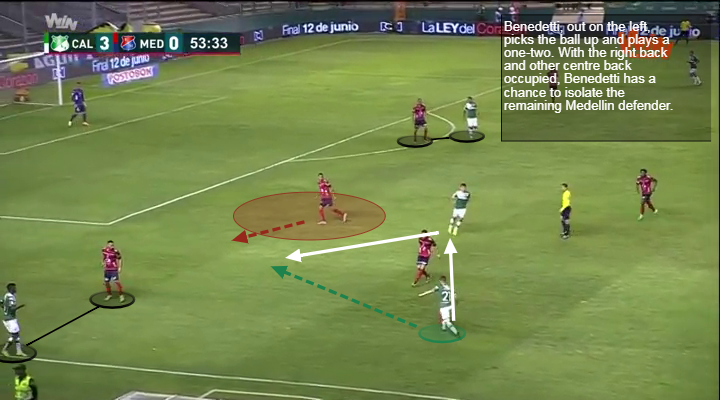 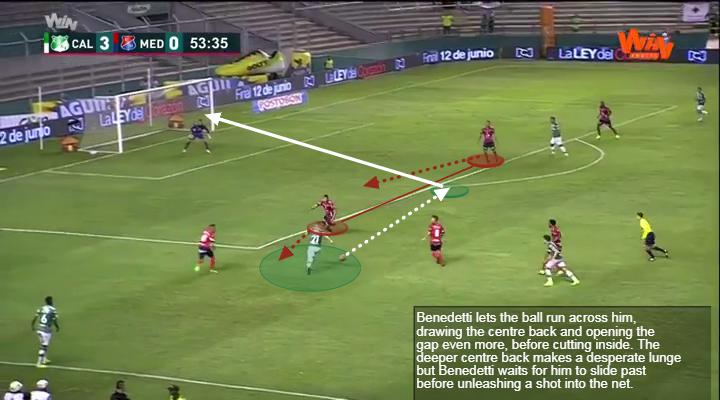 Though at his most effective in central positions behind the strikers, Benedetti’s mobility sees him drift all over the pitch and into wide areas. What’s more, his excellent crossing ability means he can make telling contributions in these positions too. 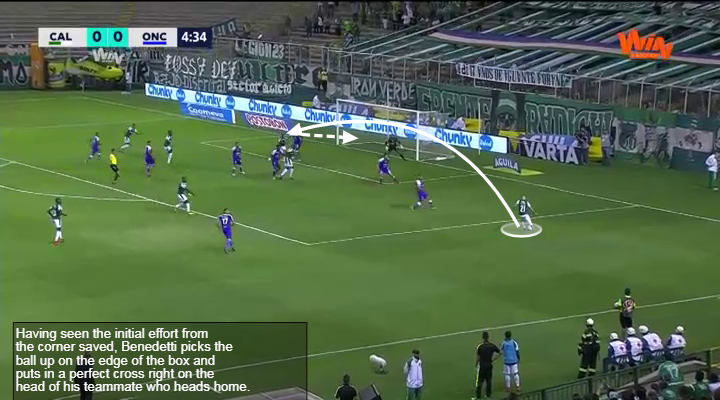 This quality delivery also makes him a good set piece taker, whether it be crossing the ball from corners or wide free-kicks or trying his luck from range due to his aforementioned shooting prowess. 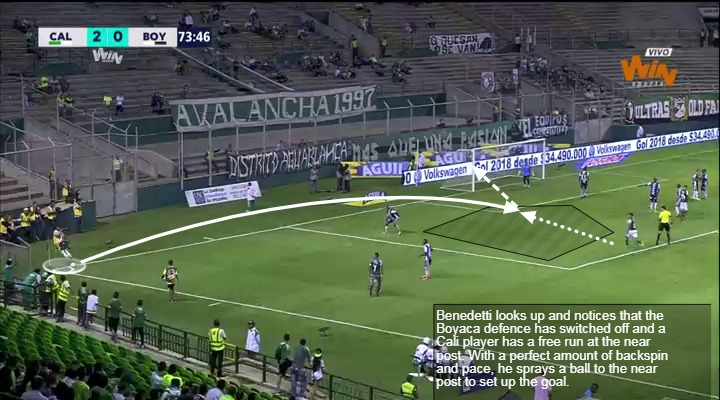 A smart, grounded individual, Benedetti has had to handle the mantle of orchestrating Cali’s attacks from a young age. Nevertheless, he’s had to overcome some sizeable set-backs already in his career.

Benedetti was forced to withdraw from the preliminary Colombia squad for the Copa America Centenario in 2016 due to injury and also missed the U20 Sudamericano the following year, again through injury. Both would have been massive disappointments but he’s come back from them strongly.

However, there is still some naivety and inexperience to his game, as demonstrated by an incident in the league semi-final last year. Benedetti scored the winning goal to put Cali into the final but then removed his shirt, receiving a second booking and ruling himself out of the final. Cali went on to lose to Atletico Nacional in the final, something which Benedetti took very badly and even had to checked in to hospital due to the emotional distress.

Hopefully he’ll be able to learn from these tough experiences and become a better player for it.

A move abroad appears imminent and it seems the right step to continue his development. Ajax have been strongly linked and it looks like a plausible link given their recent focus on Colombian talent and the fact they have done business with Cali recently, bringing Luis Orejuela and Mateo Casierra to Amsterdam. Sevilla were also rumoured to be interested last summer and perhaps Monchi might fancy him at Roma.

However, the most concrete bid has come out of left field in the form of Minnesota United, who had an $8.5million bid rejected in February. Given the massive influx of young South American talent into MLS, it may not be such a bad place to go for a year or two and would certainly offer guaranteed playing time and increased visibility.

At international level, there is a plethora of competition for the creative midfielder spots for the Colombia national team, so it may be a little while before we see him represent the Cafateros.