Marina Hegering has been one of the most solid centre-backs in Europe lately and has contributed extensively to Germany’s successful Women’s Euro 2022 journey by helping a lot in securing the team’s defence and in conceding a very minimal number of goals. Reaching the final of the tournament was not really expected from Germany since their team was said to be lacking experience and in a phase of rejuvenation.

Nevertheless, the team succeeded in proving everyone wrong and in showing some excellent performances from the group stage right up to the last game of the competition. Germany’s path to the final did not lack complications as they had to face Spain, Denmark and Finland in the group stage before having to beat Austria and France in the knockouts phase. Hegering was one of the key players who helped Germany in achieving this great result by leading the defensive line and keeping a clean sheet until the final in which they conceded two goals.

In addition to her performances with Germany, Hegering has been important to Bayern Munich Women in the last few seasons despite having suffered some tedious and long injuries throughout these years. The 32-year-old has just joined Wolfsburg Women and she is yet to start playing with her new team but she is expected to excel and use her experience in the best of ways for the benefit of her new team exactly as she did with Germany in the Women’s Euro 2022.

In fact, Hegering’s footballing journey started in 2007 at FCR 2001 Duisburg, then she had three distinct experiences at Bayer 04 Leverkusen, SGS Essen and Bayern Munich. Despite not being able to play consistently due to injuries, Hegering proved in the Women’s Euro 2022 that she still got the skills needed to help Wolfsburg and to continue playing at the highest level for the upcoming seasons.

In this tactical analysis scout report, we will be looking extensively at Hegering’s position, roles, key abilities and skills as well as how she can continue being useful to Germany’s defence and suit Wolfsburg’s tactics in the future. The analysis will therefore consist of exploring her defensive and playmaking skills, relying on some of her best actions and on data.

Hegering is a central defender who usually plays on the left as a left centre-back and who also plays as a right centre-back when needed but with less frequency. She is used to playing in formations that necessitate a back-four defensive line and she is also accustomed to forming a back-three in the 3-5-2 formation alongside her teammates, especially at Bayern Munich.

Her roles include participating in the build-up phase and providing passes to midfielders/wingers, leading the defensive line, marking strikers and covering for her teammates on the left flank when needed. She is also a leader on the pitch and usually guides her teammates in terms of positioning and marking. Hegering is a defender who calculates her movements very well and who reads the games accurately during the 90 minutes in order to execute well-timed anticipations and win some precious time in defensive duels. She wins 73,6% of total defensive duels and that’s an excellent rate that can be enhanced even further if Hegering succeeds in being consistent in terms of presences with Wolfsburg and especially in avoiding long injuries. 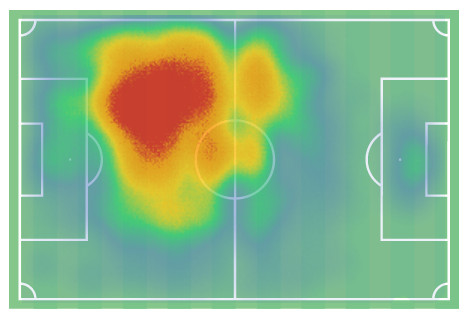 As we mentioned earlier, Hegering wins 73,6% of her defensive duels and she also succeeds in winning 67,5% of the aerial duels. These rates are very positive and can explain why Hegering is actually considered one of the best in her position especially following the Women’s Euro 2022. In reality, the German international was even selected for the team of the tournament by numerous renowned media outlets.

In order to get an idea of Hegering’s defensive abilities, it is necessary to look at the footage and not just rely on statistics. When looking at the Women’s Euro 2022 final against England, we saw how Hegering was marking Manchester City striker Ellen White tightly throughout the game, making sure that she doesn’t get the ball inside the box and aiming at limiting her touches inside the final third.

Her tactical awareness allows her to anticipate passes and use her physical strength in order to intercept passes going in the direction of White, just as the following example shows. She puts her body in front of White and gets slightly in front of her in an intelligent way to clear the ball despite the fact that White is also trying to block Hegering and pass the ball to Arsenal forward Beth Mead. 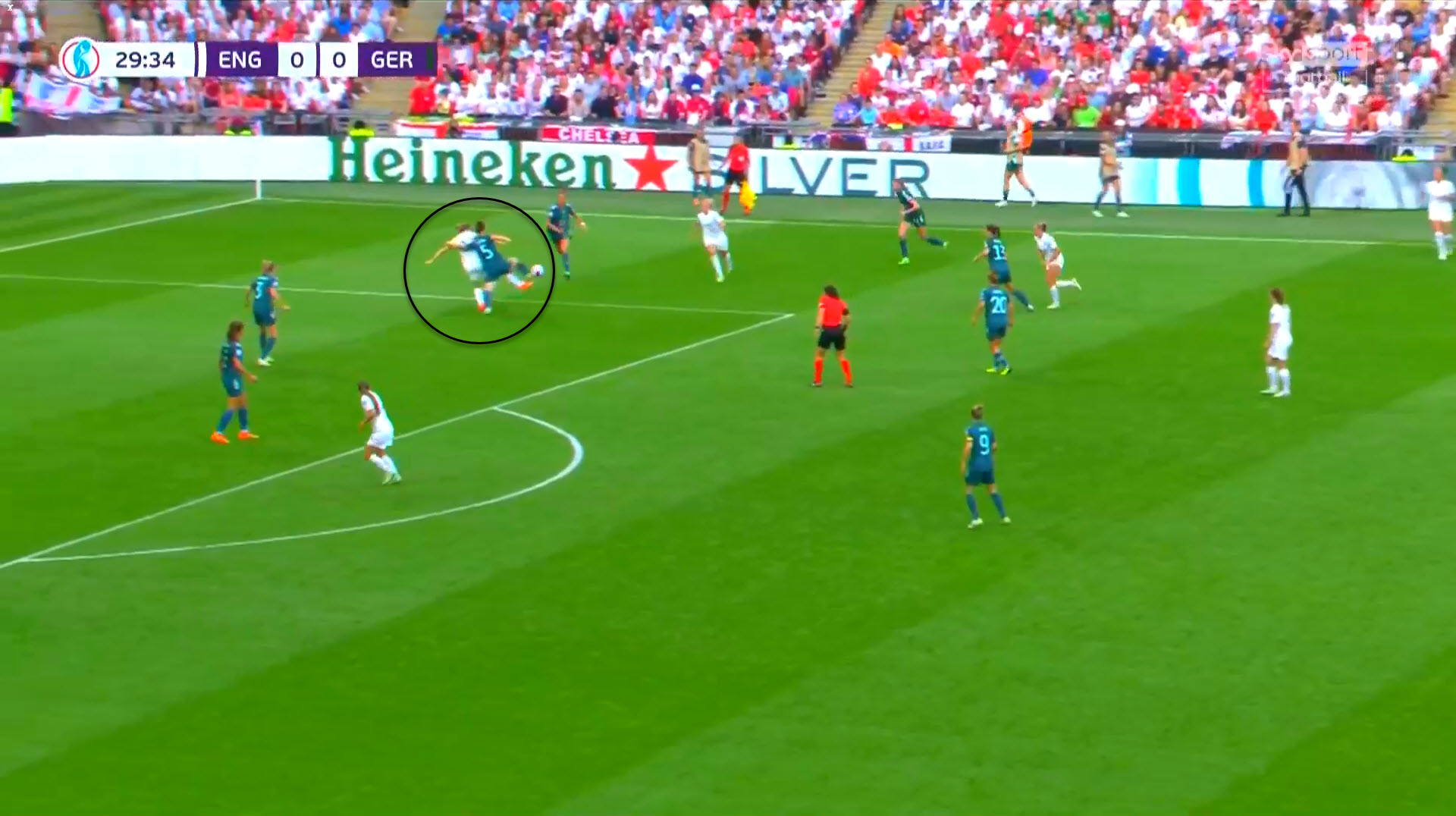 Moreover, Hegering’s interventions are often well-timed and for defenders. That’s an extremely important thing and at the same time is very complicated to do. Succeeding in executing accurate interventions to save the team in complex situations is something that differentiates excellent defenders from average defenders who succeed in being accurate on these occasions at times and commit mistakes that cost precious points on occasions that are similar to the one shown below.

In this picture, Hegering was successful in anticipating Kadidiatou Diani’s action after she was marking her without the ball. When Diani received a pass, she controlled the ball and turned towards the goal with the intention to shoot. Hegering was following Diani and did not rush her defensive action and waited until Diani turned towards the goal and aimed at shooting before intercepting the ball cleanly without committing a foul in a dangerous area. That consolidates the fact that this player’s experience and tactical awareness are excellent and that they help her a lot in decision-making. 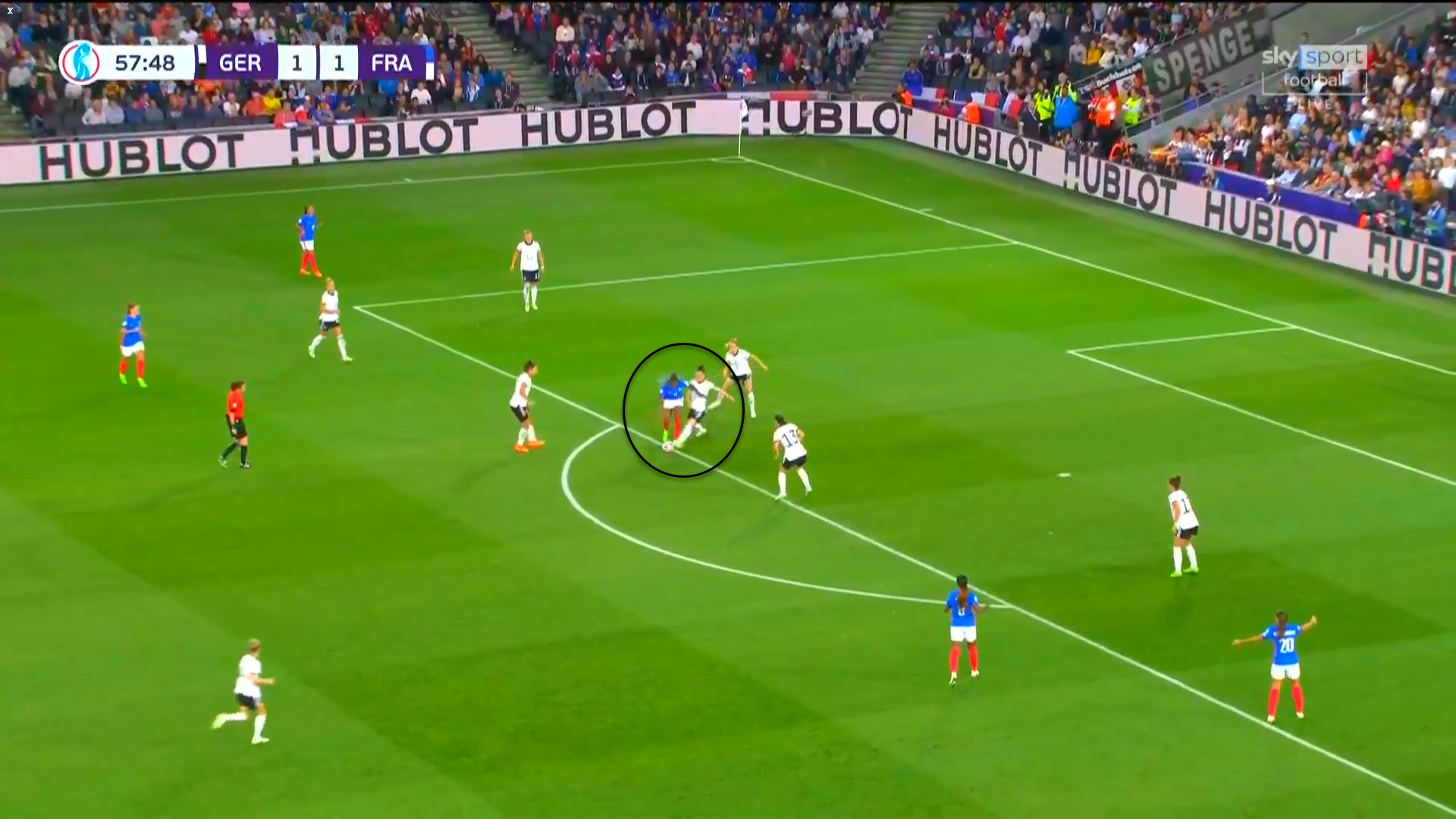 Hegering is also a very good tackler who often resorts to sliding tackles in order to save her team from certain complicated situations. Defenders are always required to use sliding tackles especially when they sense that the danger is big enough and that a sliding tackle is an adequate way to clear the ball away. It is true that these tackles are always risky, but the difference with excellent defenders is that they make the risk minimal when executing these tackles.

Hegering is one of those excellent defenders and based on the footage, she usually coordinates her body very well when making sliding tackles and knows exactly when to use them. As it is shown in this example, Hegering saved her team from a clear dangerous counterattack when she executed an accurate sliding tackle to intercept the ball after she was behind her direct opponent. She thought that the only possible way to do it was to make a sliding tackle and timing it well helped her in intercepting the ball with success without touching the opponent. 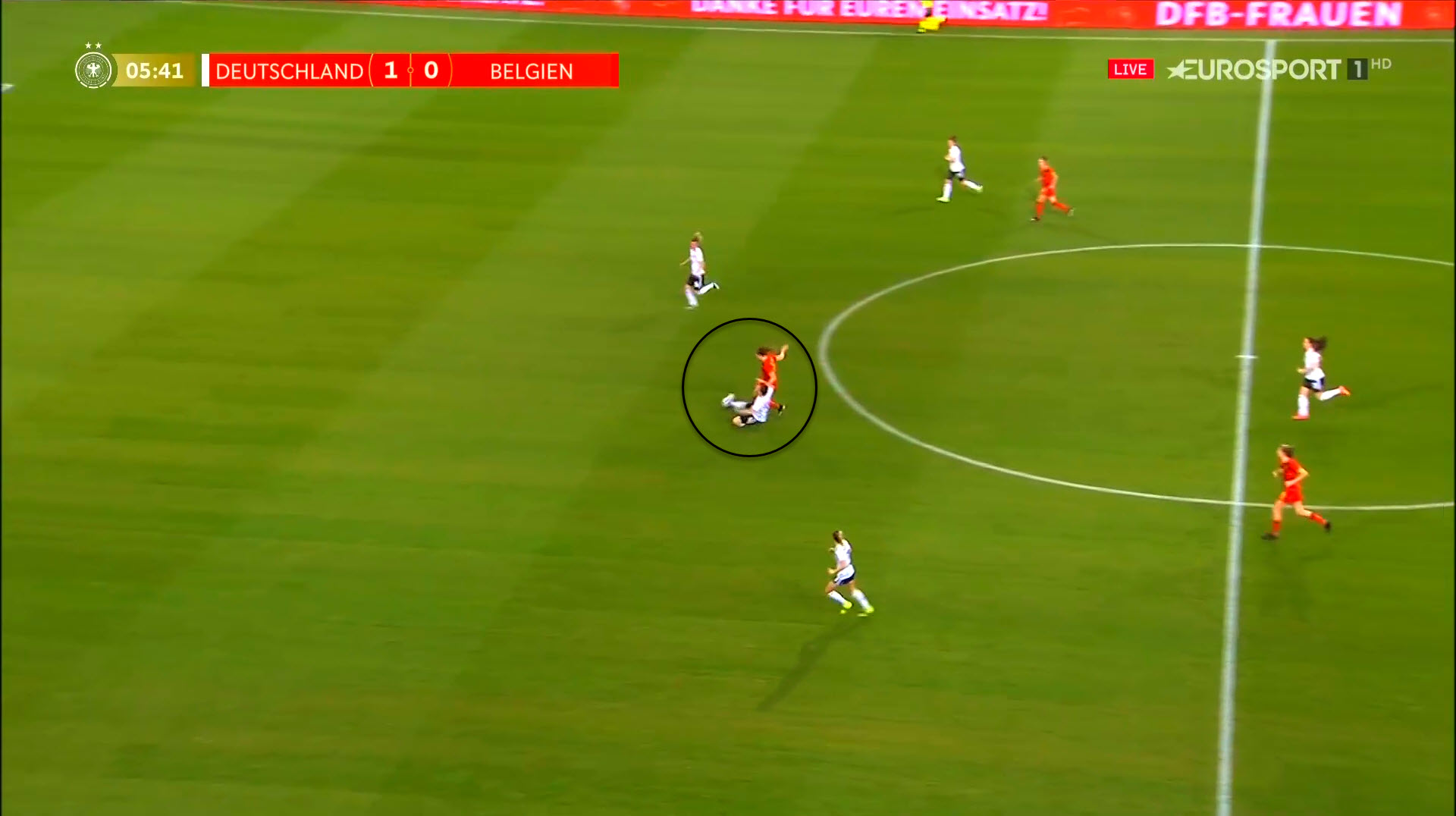 Hegering participates in the build-up regularly as it is one of her duties to start moving the ball in defence and look for passing options. Therefore, defenders’ passing abilities and accuracy need to be nearly as good as midfielders nowadays since the build-up often starts from the back and head coaches usually instruct centre-backs to provide accurate passes or long passes and not just throw the ball away without too much thinking.

Hegering’s passing accuracy equals 95,3% which is a huge rate that says a lot about the players passing quality and vision. It is true that most of Hegering’s passes are in the team’s own half, yet, the German international often advances and provides long passes to both wings or to the final third.

As you can see below, she spotted an unmarked player on the right wing at this moment and therefore she decided to provide an accurate long pass toward her. She was successful not only in getting the ball to her teammate but also in creating numerical superiority and a goalscoring situation out of nothing. This makes Hegering an additional playmaker on certain occasions and that can be fruitful, especially when playing against teams that mark midfielders tightly or apply continuous pressing on them. 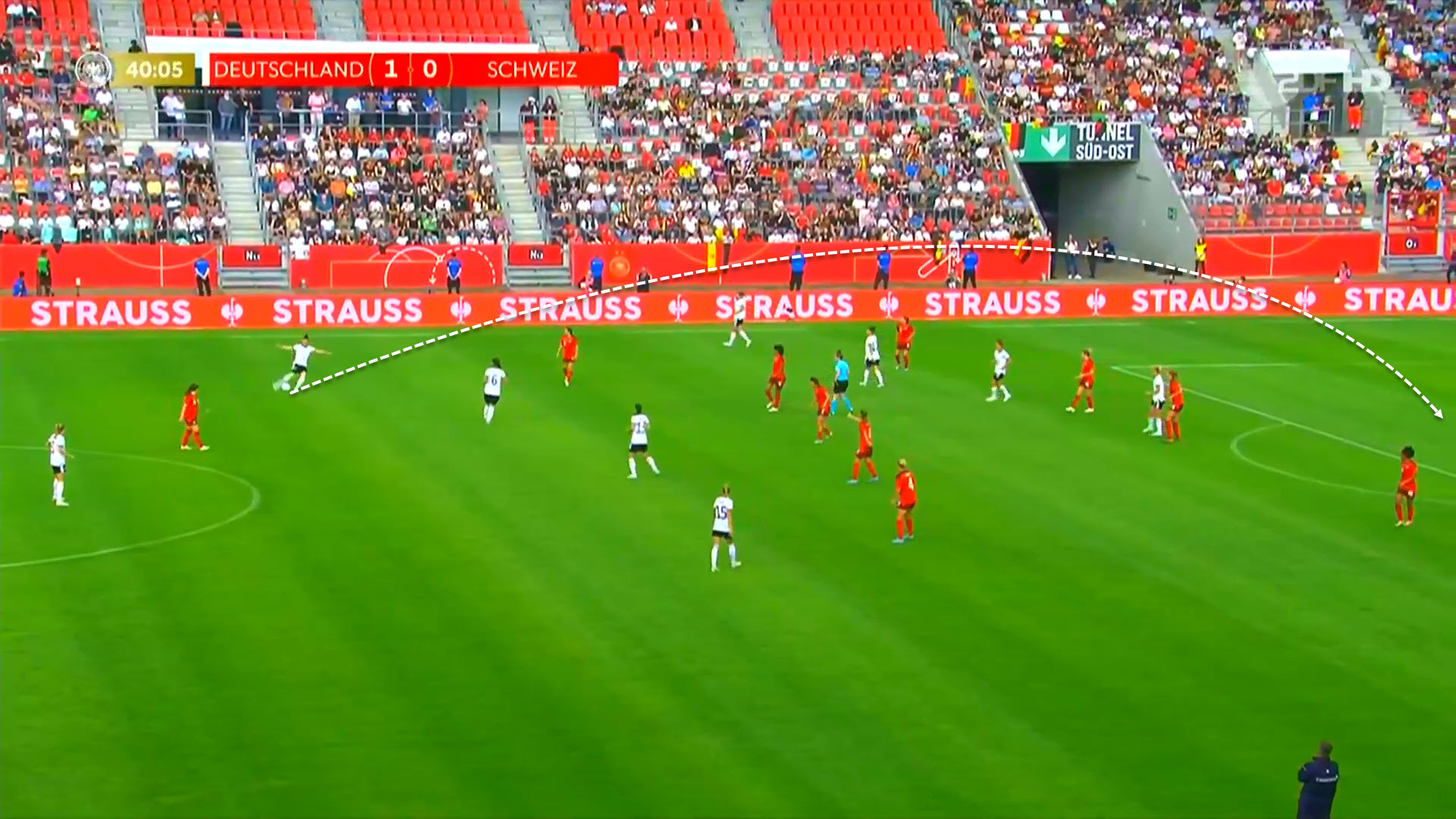 When the team is in possession, Hegering advances with the whole defensive bloc and acts like a midfielder. She showed on some occasions that she can also be impactful when using her left foot when providing crosses. In the next example, she gave an assist to her teammate with an excellent cross towards the box using her left foot. This accuracy and variety of solutions make Hegerberg a very versatile player despite being a defender and automatically a player who apparently has limited attacking roles. Nevertheless, she can be extremely dangerous whenever she advances. Her passes to the final third accuracy stands at 61,7%. 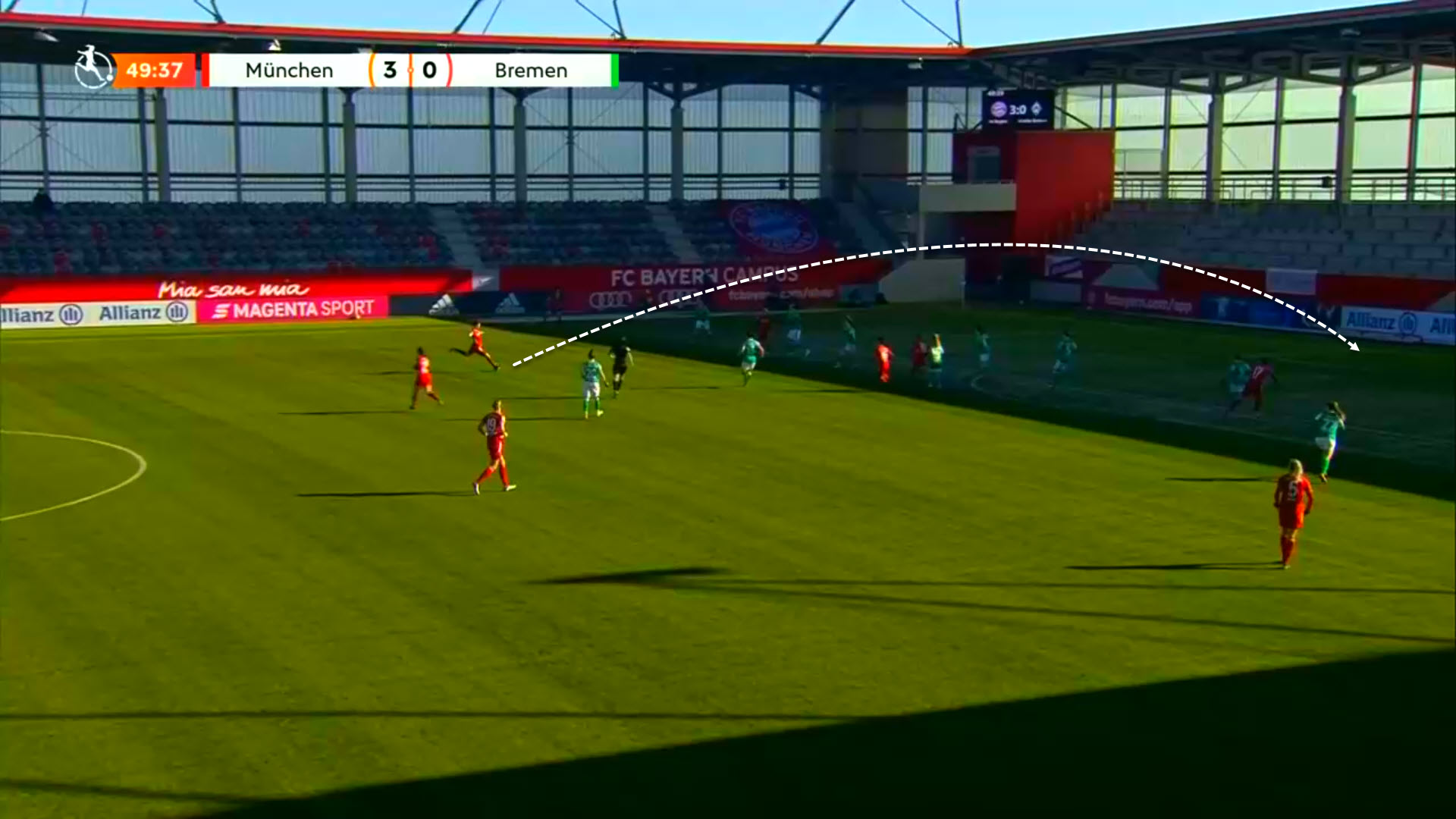 In terms of goalscoring, Hegering is mainly important in this aspect during set-pieces. She is excellent in the air and can score headers whenever she receives accurate crosses. Moreover, she is good enough in offensive duels and often anticipates her markers to score. She did that multiple times at Bayern Munich and she will most probably continue in exploiting her goalscoring abilities during set-pieces, such as she did in the following example when she received a cross from a free-kick and kicked the ball with determination despite being disturbed by her marker. 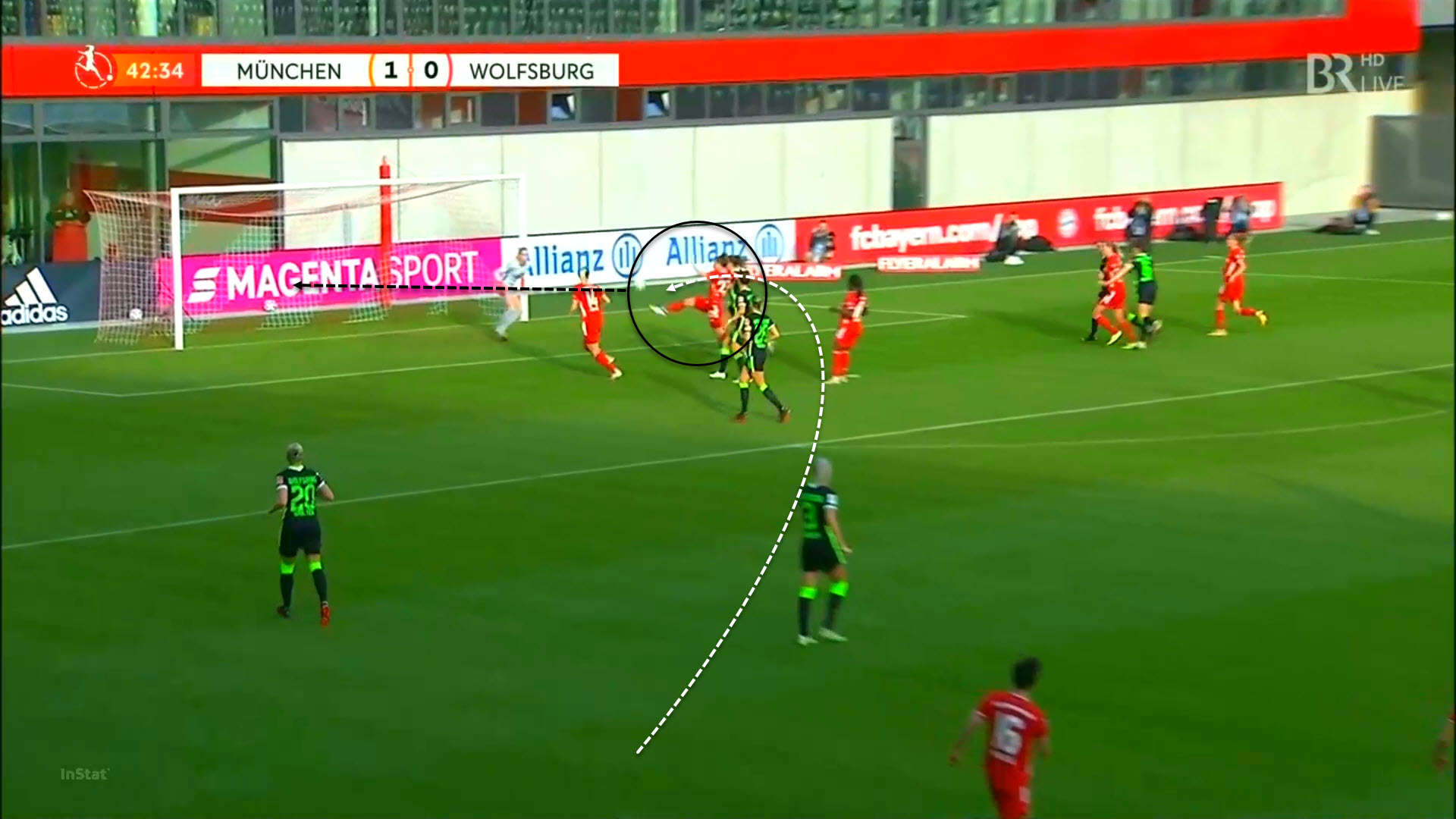 Marina Hegerberg has been one of the best centre-backs during the Women’s Euro 2022 and this can be a source of motivation for her to start her new Wolfsburg journey in the best of ways. Why not excel during this season and help her team reach advanced stages in the UEFA Women’s Champions League as well as in the Frauen Bundesliga? In addition, she will have to keep playing at her best in order to participate in the 2023 Women’s World Cup and eventually help Germany reach their goals.