While Bayern Munich’s first team had a rocky start to their season, seeing them fall as low as eight in the Bundesliga, they’ve managed to right their ship and are now in first place, four points ahead of Borussia Dortmund. Similarly, Bayern’s U19 squad faced a similar path, with their consistency ultimately bringing them to the top of their respective youth Bundesliga table. The analysis shows that one of the key contributors to their success is 17-year-old Malik Tillman.

The 6’1 forward has contributed 13 goals and seven assists, leading the team in both categories. Tillman’s primary position in the squad is at centre-forward, where most of his offensive output has come from, but he has also featured as an attacking midfielder, which he admitted is his preferred position. This scout report will provide a tactical analysis of Malik Tillman, examining how he fits into Danny Schwarz’s tactics with the U19 Bayern side.

Tillman’s ability to defend space successfully is a requirement for him to progress within Bayern’s youth system, especially if he wants to play as a midfielder. Against Tottenham in the UEFA Youth League, his ability to do so helped prevent Tottenham from playing through Bayern, and ultimately it helped Bayern secure a 4-1 victory. For much of the match, he was alternating with Joshua Zirkzee when it came to either pressing the centre-back in possession or marking Spurs’ defensive midfielder. When Zirkzee would go to press the centre-back, Tillman would drop on the defensive midfielder and vice versa. However, there were moments when there was too much space for Tillman to cover if he were to press. 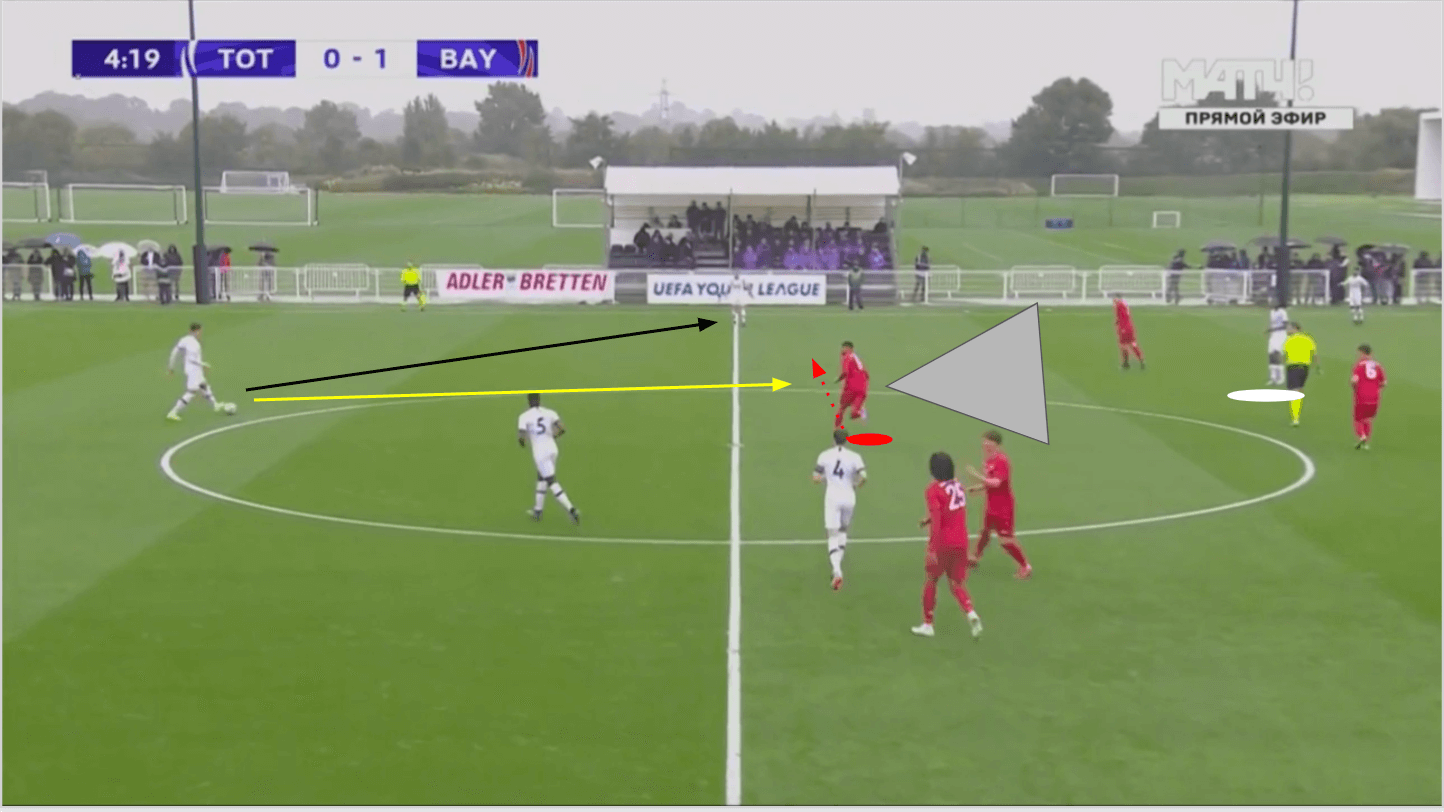 This image is one of those examples. Instead of pressing the centre-back in possession, Tillman shifted over to his right, using his cover shadow to prevent the yellow pass from occurring. Just by properly positioning himself, he was able to still dictate the defender’s pass. The ball progressed to the left-back for Tottenham, which was quite predictable, as Tottenham was playing out of pressure on the right side. This predictability becomes invaluable when defending, as it allows the team to set traps for their opponents to play into.

While able to organise himself properly within the context of his teammates, Tillman’s ability to read a situation and successfully take advantage of it demonstrates both his game intelligence as well as his high work rate. Against Spurs, Bayern were coasting to a 4-1 victory in injury time. While still working towards scoring, they lost possession in Spurs’ penalty area. 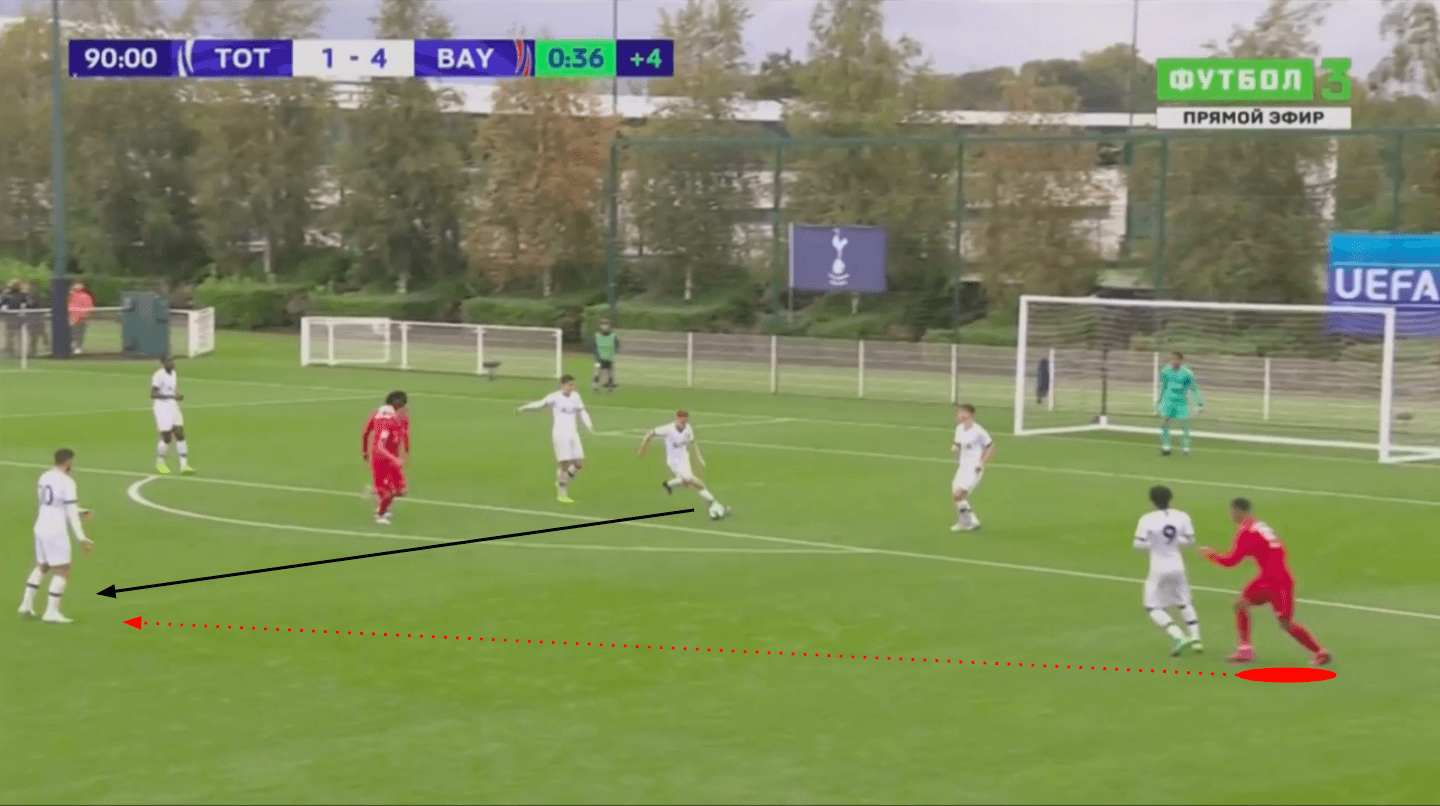 As Spurs regained possession, they looked to play out of the back. Despite the game essentially finished, Tillman saw the pass developing and moved to counter-press his opponent. As the ball left the defender’s foot, Tillman used his speed to close down the opposing midfielder. While the midfielder checked his shoulder, he didn’t see what was coming directly in front of him. As the ball arrived, so did Tillman, using his first touch to simultaneously dispossess his opponent and play the ball to a teammate behind him.

While his defensive work rate is quite high, his ability to see the pitch and distribute accordingly play a large role in why Bayern fans are so excited about his potential. He is able to both find teammates in space with a pass and maintain possession in order to give teammates time to find that open space. The first example demonstrates his patience on the ball. 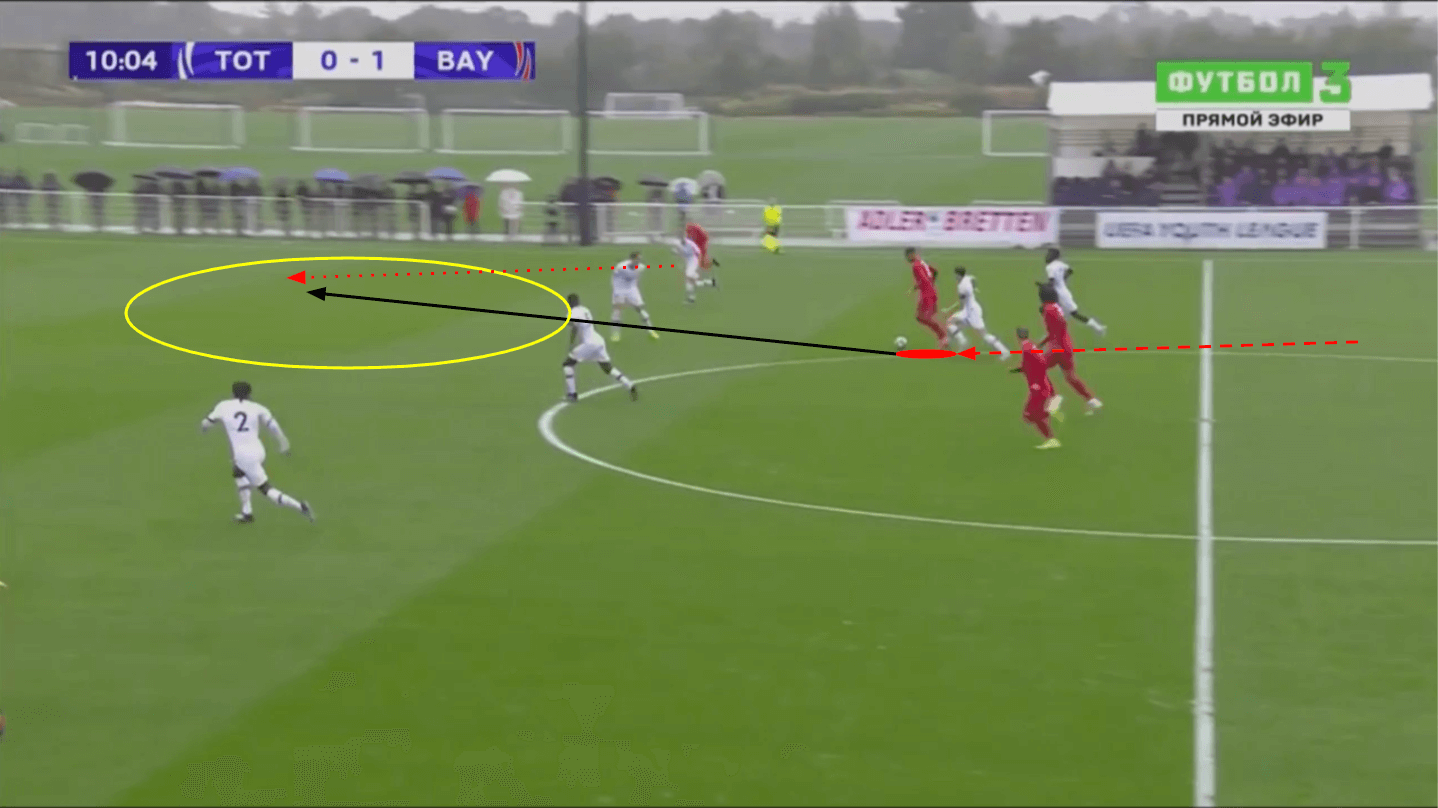 Tillman picked up the ball in his own half under pressure. After holding off his first defender, a second came to pressure. Tillman feigned dribbling to his left, freezing his defender and allowing him to progress forward up the pitch. As he dribbled, followed closely by the two defenders he had just beaten, Tillman held on to the ball, allowing his teammate, Lasse Günther, to get even with the backline before making a diagonal run into the open space. Tillman released the ball at the perfect time, and Günther was in on goal, where he buried his chance.

Later in the match, Tillman was able to scan and recognise which teammate had more space on a counterattack that Bayern was building. As the ball fell to him in the centre of the pitch, Tillman checked both his options on the right-wing and left-wing. 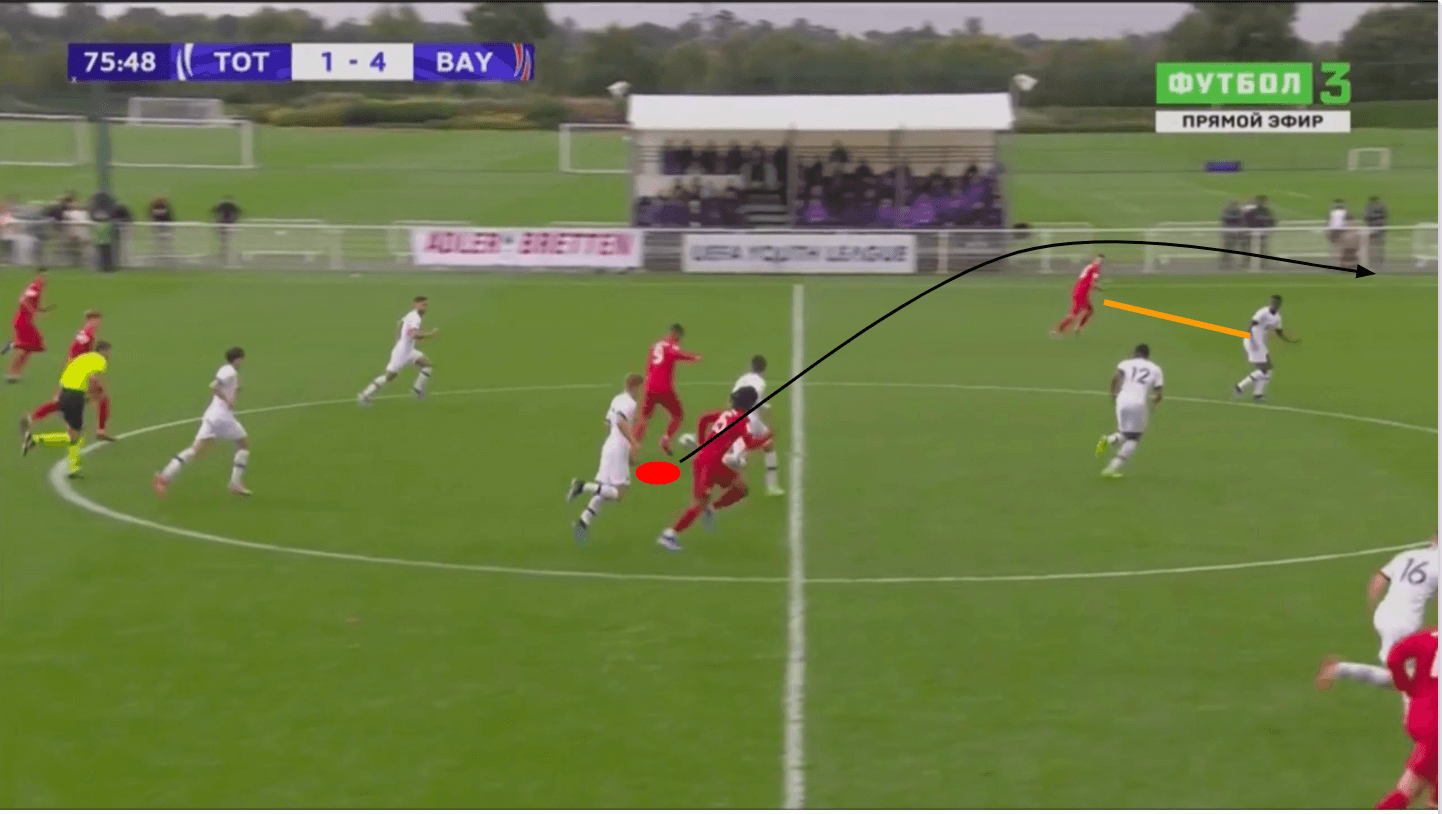 On the right-wing, at the bottom of the image, Tillman recognised that Dennis Cirkin, the left-back for Tottenham, was closely marking Günther, who had already scored two goals at this point. He then recognised, on the left side, the amount of space between Marvin Cuni, who was the left-winger, and his defender. Tillman played an aerial pass into the space behind the defence, allowing Cuni to run onto the ball and take on his defender, who he dribbled past and then crossed the ball to Zirkzee, who was unable to finish the chance.

Tillman’s ability to distribute the ball has certainly made him a strong candidate to progress through Bayern’s youth system. How he gets into the position to distribute the ball is even more impressive and will help solidify his future career. His focus on his body shape and how it allows him to receive a pass make it more likely for him to distribute properly, consequently improving Bayern’s play.

The first example highlights his ability to position himself between a defender and the ball in order to hold off the defender. 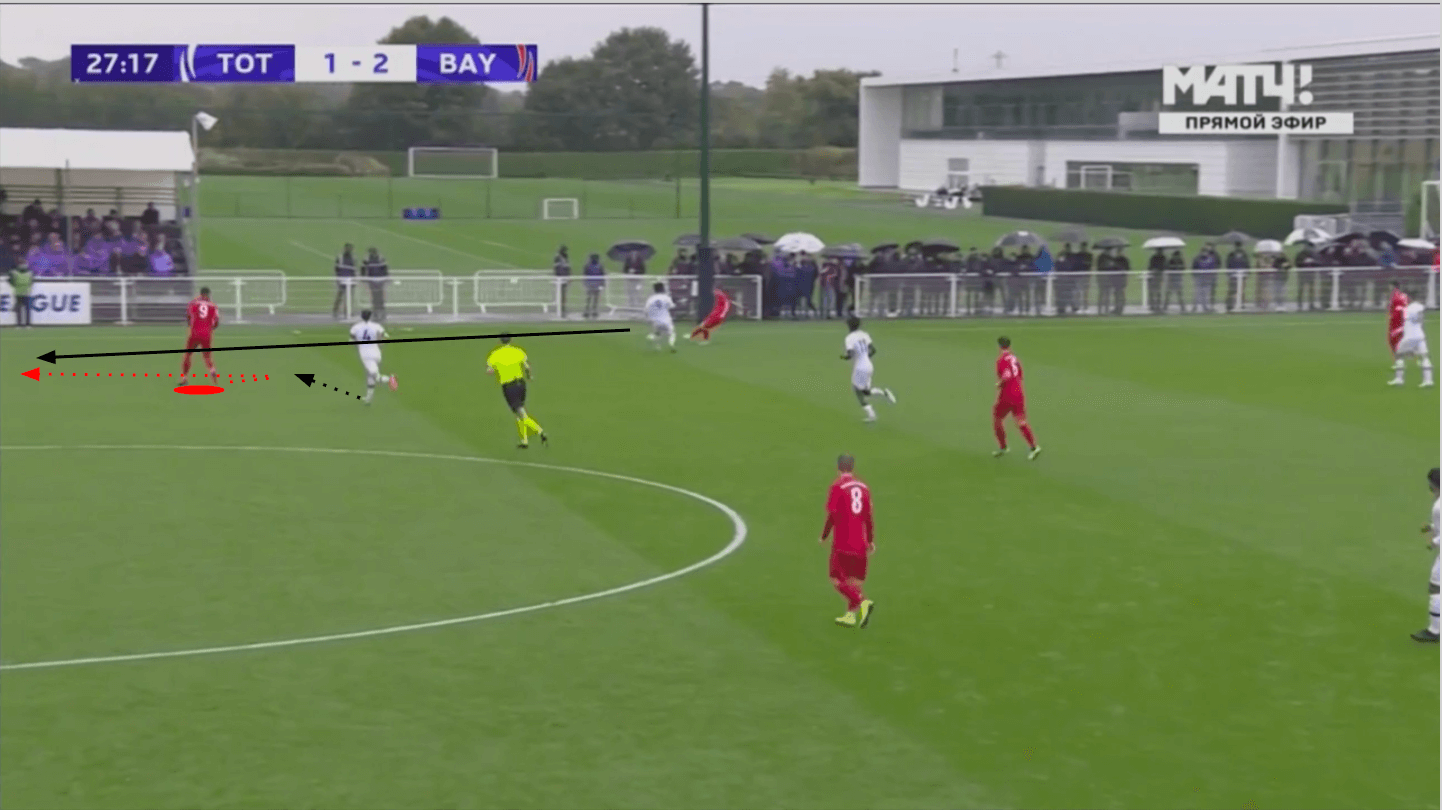 Tillman checked back to receive a pass from his right-back. As the pass was played, the Spurs’ defender shifted over to defend. Tillman’s first step was back towards the defender, which caused the defender to change direction, thinking Tillman would receive the pass facing his own goal. As the defender bit on the fake move, Tillman progressed up the field, receiving the ball facing the goal he was attacking without ever having to touch the ball. Tillman was able to successfully manipulate a defender out of the play without even touching the football.

Similarly, Tillman’s body shape when taking his first touch with a pass also eliminates defenders. After just winning possession for his team following some good counter-pressing, Tillman was about to receive a pass from his teammate. 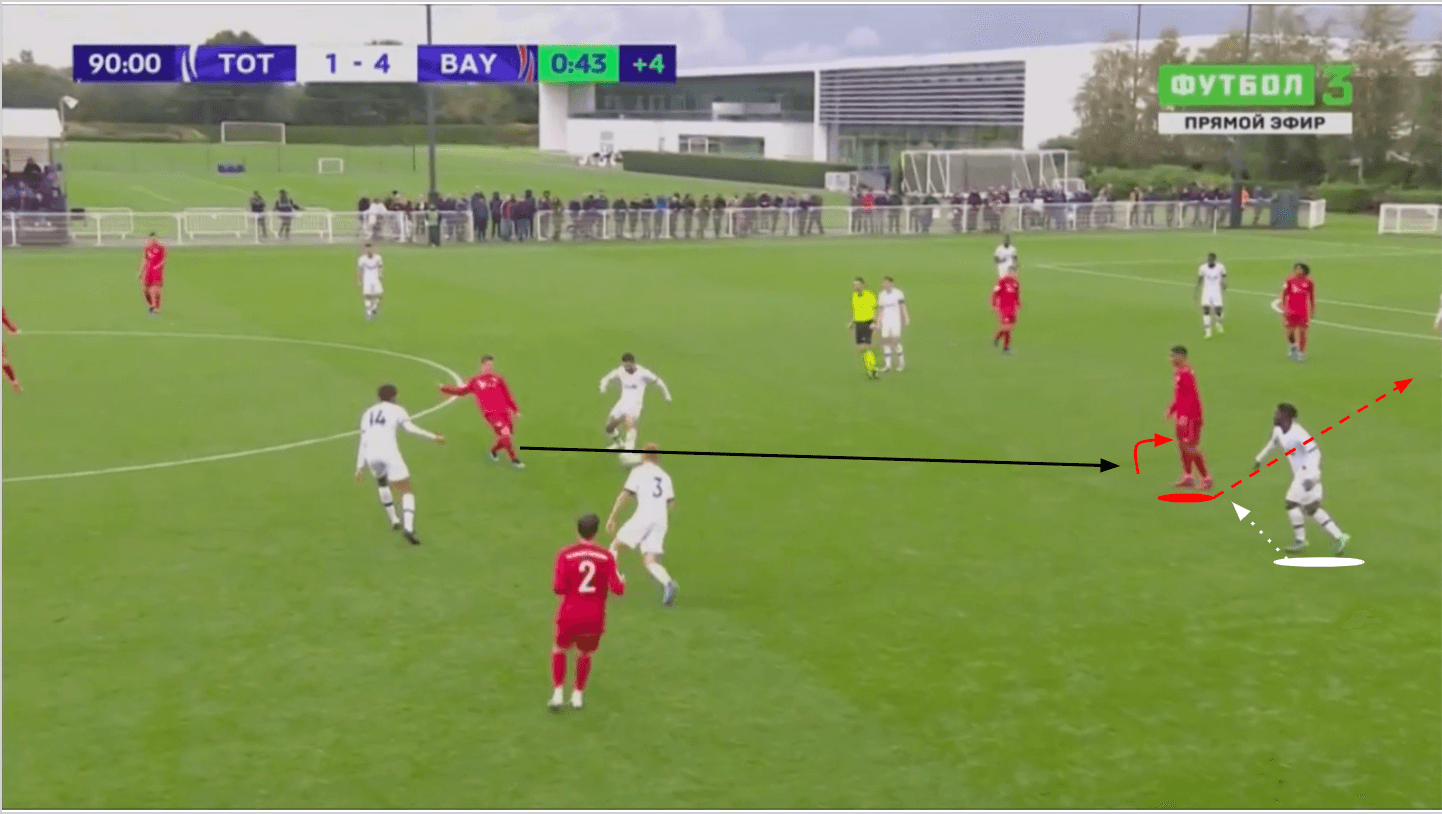 As the ball was whipped into his feet, Tillman knew that he had a defender on his left side, so it became essential that he received the ball with his right foot. Accordingly, Tillman opened up his hips, turning his back to the defender in white in the process. This effectively eliminated the defender, as his only option to stop Tillman was to foul him, which he did not. Instead, Tillman was able to dribble up the pitch in the half-space and find an open teammate. This ability to position himself properly allows Malik Tillman to create even more chances for his team, and it has certainly led to some of his seven assists. While he still has the occasional opportunity where he didn’t check his shoulder or wasn’t able to properly receive a pass, those will likely begin to happen less frequently as he develops, making him a more complete and consistent player.

The final topic that is essential to analyse is Tillman’s ability to score. His team-leading 13 goals come from a variety of opportunities, including him using his head on multiple occasions to beat goalkeepers. What stands out most with his goalscoring is his recognition of space and his ability to arrive in that space at the correct moment in order to give himself an opportunity to score.

The first example demonstrates Tillman’s ability to recognise space, and it is one of the more common goals scored in football. A driven ball on the ground coming from within the penalty area to a forward who ‘simply’ needs to tap the ball in.

However, Tillman’s work on this goal was more complex than that. First, he was able to lose his marker. He achieved this by beginning the move between the two centre-backs, who were desperate to recover and protect their goal. As he was about to be picked up by a midfielder, Tillman made a quick 1-metre sprint towards the ball, eliminating the midfielder from possibly defending and getting himself into space to tap the ball in. Despite seeming easy, the goal happened due to Tillman’s intelligent recognition of where he needed to be at the right time.

Similarly, Tillman took advantage of a large amount of space in order to score, demonstrating his ability to manipulate defenders along the way.

As Tillman checked to the ball, the centre-back who was marking him followed. His teammate at the top of the image has pinned the other defender, allowing for Tillman to exploit the space. Tillman’s first touch sent the ball out wide. As soon as he played that pass, Tillman curled towards the goal, simultaneously getting in front of his opponent. His teammate played the ball into the space, and Tillman was alone on goal. Despite not having the best first touch, he had created so much space for himself that he was able to control the ball with his second touch, dribble around the goalkeeper, and score.

While still young at the age of 17, Malik Tillman has clearly demonstrated his scoring capabilities along with many other talents. His abilities both on and off the ball make him one of the more highly-rated prospects that Bayern Munich have in their system. Tillman will look to follow in the footsteps of Joshua Zirkzee and Oliver Batista Meier, who have spent time this season at the U19 level, Bayern Munich II, and the first team. He’ll certainly still need time to develop within their system but expect to see Tillman on a Bundesliga pitch sooner rather than later.