In response to the somewhat underwhelming careers of Andrey Arshavin and Alan Dzagoev, many Russian fans are looking to the next generation with cautious optimism. Aleksandr Golovin‘s stock has risen in recent years and he’s seen as the nation’s great hope.

However, the next star emerging from CSKA’s youth ranks may have even more potential. This analysis will take a look at their intelligent young striker, Fyodor Chalov.

Having joined CSKA Moscow at the age of eight, Chalov made his senior debut for the club in 2016. His chance came following impressive performances in the Uefa Youth League, where he scored four goals in one game against Monaco.

Still just 20, he has scored an impressive 21 goals in his 32 starts as a professional. He has also represented his country at every level from under-16 to under-21, with a full international bow expected during the next round of fixtures in March.

He remains a relative unknown to most football fans, but goals against Arsenal and Real Madrid have helped to attract interest from a host of big clubs.

One of the most impressive aspects of Chalov’s game is his ability to create and exploit space. His movement to receive is excellent but equally notable are his decoy runs to create openings for teammates. Overall, he’s quite an unselfish player, making his goal record all the more outstanding.

In the first image below, he makes a diagonal run to drag his marker away from space. This creates a channel for his teammate to continue progressing with the ball. 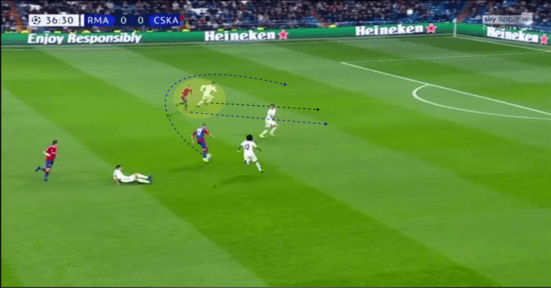 Following his teammate’s dribble to the edge of the box, Real Madrid’s defenders all move towards the man on the ball. Chalov again recognises where the space is and moves into it on the blind-side. His intelligent manipulation of space results in him becoming the free man in this attack. 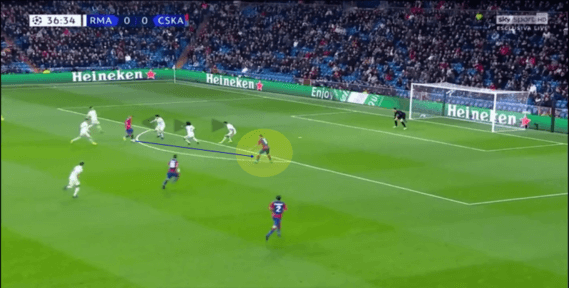 He receives possession and takes a touch out of his feet before lining up a shot. The Madrid backline scrambles, shifting back across in an attempt to block his effort on goal. He fakes to shoot, opening up a new channel through which he calmly finds the top left corner. 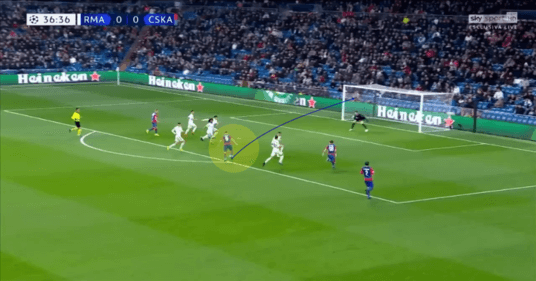 The above sequence highlights his ability to recognise, create, and exploit space. He consistently shows the intelligence to react to changes in the positional landscape of both the opposition and his teammates. These quick thinking and problem-solving abilities are a central part of his game.

As mentioned, his tally of 21 goals in 32 starts for CSKA has been remarkable for such a young player. This season, he leads the way as top scorer in the Russian Premier League with nine goals in 17 games. His xG is 9.21, meaning he takes most of the quality chances that come his way. Below is Chalov’s xG map for the league campaign so far. 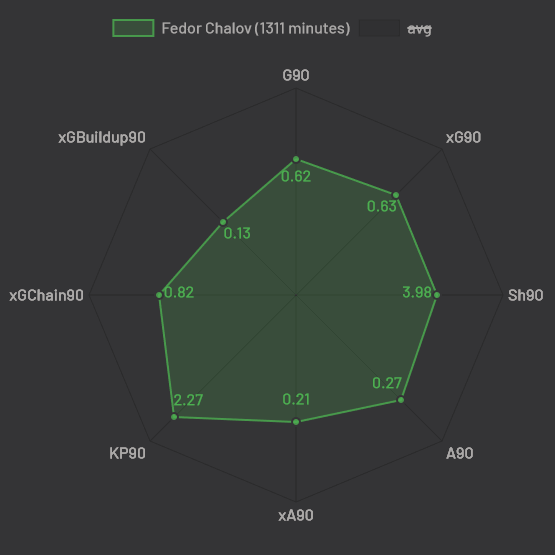 His composure in front of goal is noteworthy, and his calmly taken strike at the Bernabeu represents the perfect example of his confidence. Most of his goals come from inside the box, getting on the end of crosses, through balls and rebounds. He has scored once this season from outside the area.

Aside from being clinical with his chances, Chalov also has an element of subtlety to his finishing. He often waits intelligently for the goalkeeper to dive before passing into the opposite corner of the net. The goal illustrated below highlights an occasion where the youngster did just that.

With the route to progress with the ball blocked off by the opponent’s defenders, Chalov plays a one-two with a teammate on the edge of the box. The defenders follow the ball, allowing him to get behind their line and receive again. 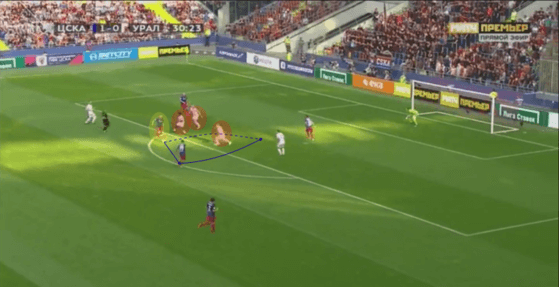 Now through on goal with just the goalkeeper to beat, the striker eyes up the left side of the goal before waiting for the keeper to make the first action. 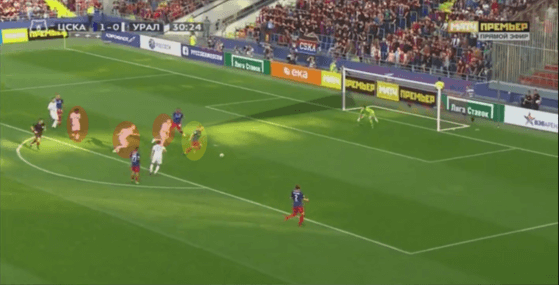 The keeper obliges by diving to his right before Chalov calmly passes into the opposite side of the net. 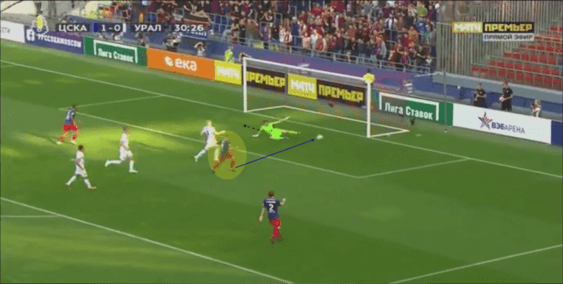 This play once again shines a light on his ability to think quickly, manipulate opponents, and respond to their actions. It’s these qualities that mark him out as one of the most intelligent young strikers in Europe.

Given Chalov’s close control and creativity, he is equally adept at coming short to receive the ball as he is at running in behind. His ability to recognise where the space is often sees him drop into the false nine position to link the play and help create chances for his teammates. He also drifts into wide areas on occasion, before cutting infield and combining.

“I want to score, but if my goal is only that, my game will get worse.”

He has recorded four assists in the league this term, making him joint-third in the rankings. Furthermore, he has made an average of 2.27 key passes leading to a shot on goal per 90 minutes. The combination of intelligence and technique is present in every aspect of his game, and it makes him an exceptionally well-rounded young striker.

He regularly engages effectively in combinations with teammates around the edge of the box, as we’ve seen already. With the game becoming more fluid from a positional sense in recent years, Chalov is well placed to succeed at an elite club.

The images below show him dropping off the front line to take on the role of creator. He receives to feet while a teammate runs beyond him. Chalov then picks out the runner with a well-timed ball in behind the opponent’s defence. After playing the pass, he holds his position to allow his teammate to exploit the space on his own. The winger runs through on goal before chipping over the goalkeeper to score. 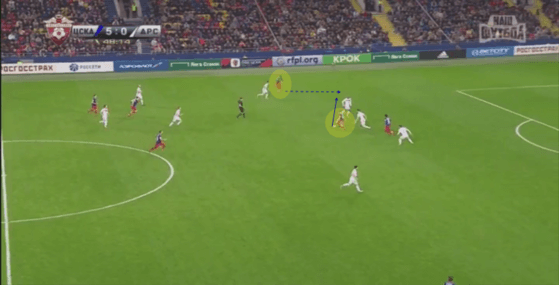 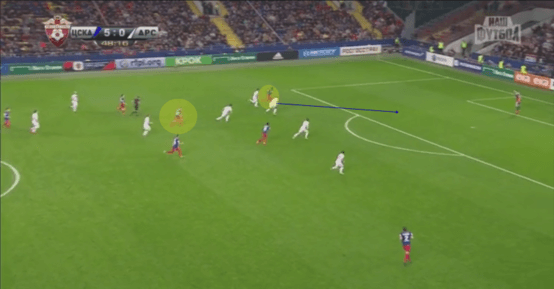 His ability to come short, run in behind, or act as a reference point for his midfielders to play off, has helped make CSKA unpredictable this season.

This year is likely to be a significant one in the career of Fyodor Chalov. With an upcoming international debut, and the chance to finish as RPL top scorer, interest from abroad is inevitable. The likes of Watford and Everton have been heavily linked in recent months, while Dortmund are also reportedly keeping tabs. Given Chalov’s talent and confidence, there’s every reason to believe that he could make the step-up this summer.