Over the past few seasons, German clubs have cornered the market of American youth prospects. As the current leaders on the Bundesliga table, Bayern Munich has long wanted to take part in this movement. Bayern Munich II centre-back Chris Richards may be their best opportunity at doing so.

Like a number of the United States’ intriguing youth products, Alabama native Richards began his playing career in Texas. He eventually earned a 10-day trial at Bayern Munich after academy stints at Houston Texans and FC Dallas. A permanent contract with the German giant quickly followed, and since then Richards has shown promise throughout his young career. This tactical analysis will dissect Chris Richards’ playing style.

Now at 20 years old, Richards has become a staple in the Bayern Munich II backline. He has started 22 of Bayern II’s 27 matches so far, and while doing so has shown a rare versatility. His heat map below displays just how positionally flexible he has been, with considerable evidence in both the half-spaces and the wide areas. 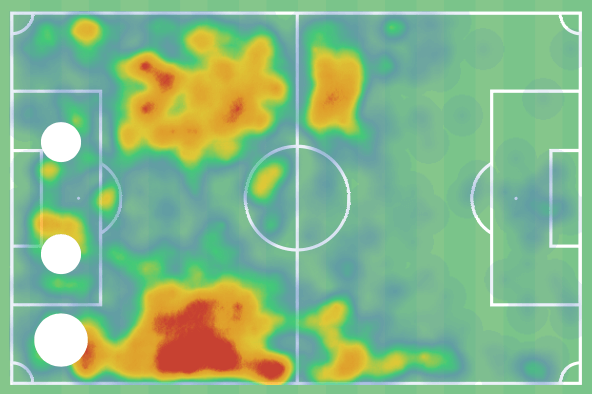 Bayern II play similarly to their Bundesliga counterpart in that they maintain mostly possession-dominant tactics and currently lead 3. Liga in goals with 52. This style often implies a high backline, which plays to Richards’ strengths. In a high defensive line below, Richards plays an important role in preventing comfortable opposing possession by cutting off a passing lane on the opposing counter-attack.

There are few positional moments when Richards’ lack of experience shows, as seen below. His centre-back partner pushes forward on a pressing attempt. Richards fails to cut off the passing lane between himself and the left-back, and an opposing line-breaking pass is completed. Fortunately in this specific case, Richards recovered and tackled the ball away farther back on the pitch. 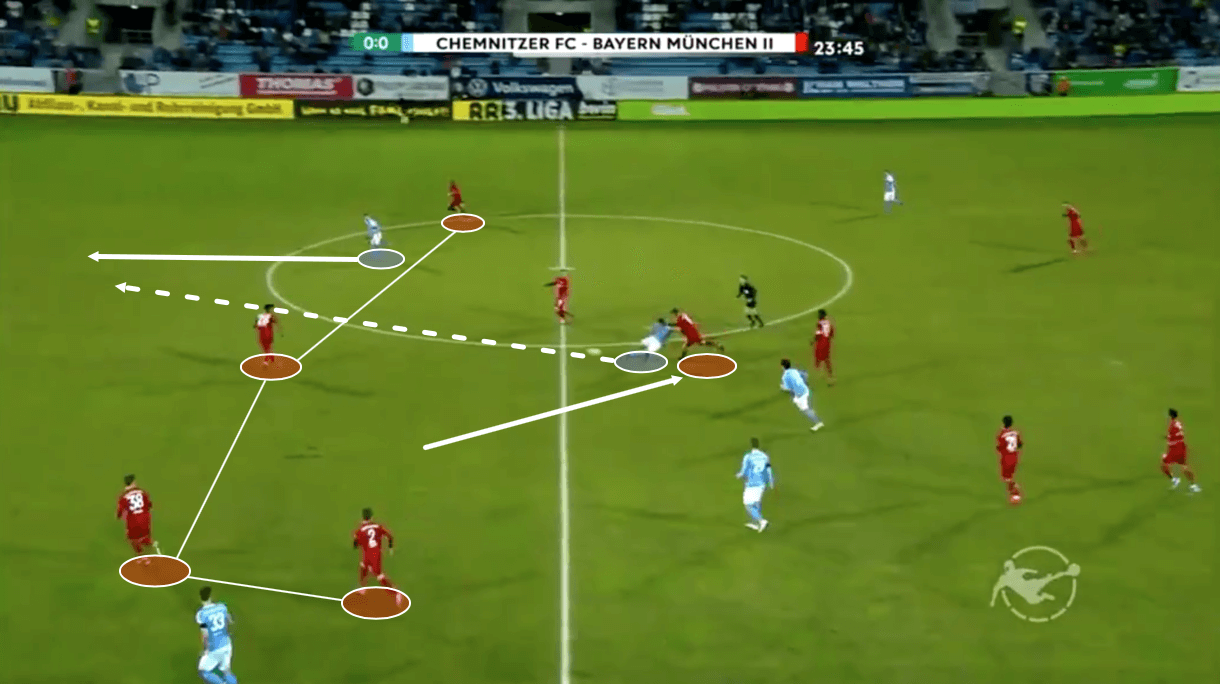 While the scenario above demonstrates a lack of spatial awareness, it was not completely Richards’ fault as his centre-back partner’s press failed; Richards typically uses his mix of athleticism and intelligence well.

One trait that has been rather unjustly tagged on Richards is his lack of physical strength. Despite his relatively lanky frame, Richards has proven abundantly that he has the strength to outmuscle opponents and complete physical defensive actions. This 3. Liga season, he has recorded the fifth-most recoveries per 90 minutes with 11.34. Additionally, he ranks 10th in counterpressing recoveries per 90 minutes at 4.71. His recoveries map below emphasises his counterpressing ability. 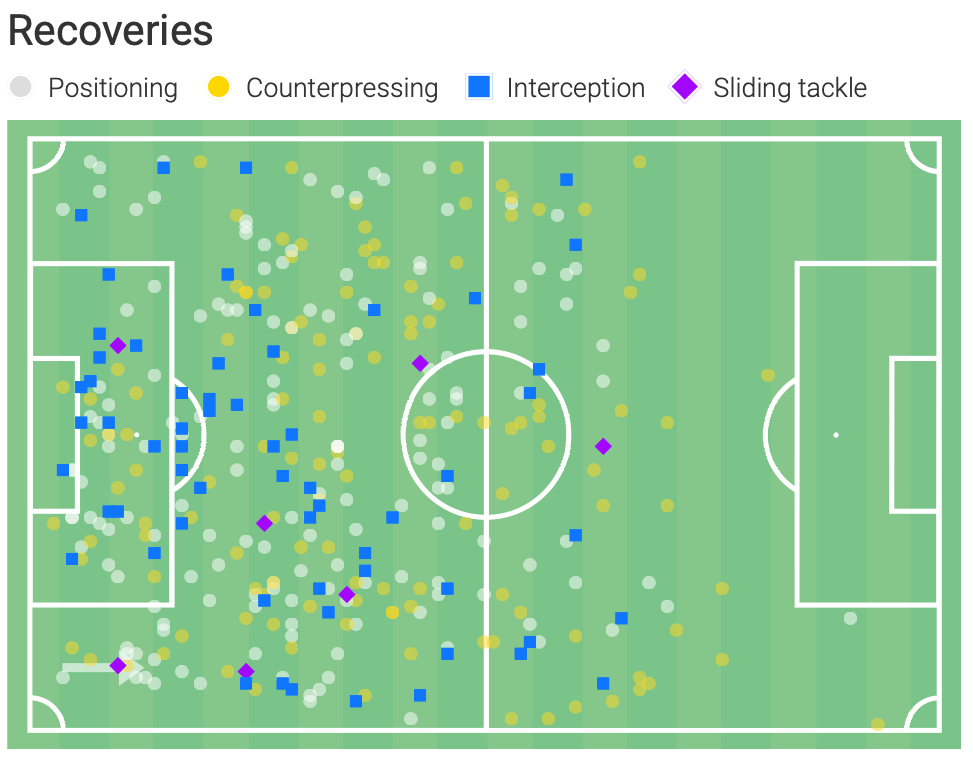 Richards is a resilient, aggressive defender. He continues to show the ability to read opposing actions before they happen as well as the reaction time to affect them. Below, the Bayern II backline is dropping back to defend a quick attack by the opposition. Richards, the ball-near defender, notices an opposing passing lane and takes advantage by stepping forward and cutting off that lane. He intercepts the pass and has regained possession for Bayern II.

Below is another example of Richards’ aggression and vision in defence. The ball has been hit away from the box by the opposition, and instead of Richards dropping back to defend a counterattack, he initiates a counterpress in the anticipated direction the attacker is turning. Richards blocks the space in front of the attacker and successfully dispossesses him before completing a forward pass in a quick transition.

In deeper defending, Richards again displays the strong anticipation and intuitiveness to both outsmart and outmanoeuvre the opposition. Here, we get a good example of Richards’ reaction. In the wide area, the opposing attacker as shielded the ball from two defenders. Richards not only sees his teammate coming in to contribute pressure on the ball, but is also visibly one step ahead of his opponent in his balance. With his left foot planted, Richards can push off that foot and beat the attacker to his own feint, successfully overtaking possession. Knowing how to control your balance and vision are two invaluable traits for a high-playing defender.

On-the-ball ability is an increasingly popular trait among modern centre-backs, and Richards is no exception. He shows an outstanding level of comfort on the ball, even in more attacking areas. In the scene below, Bayern II are receiving little pressure in possession in the opposing half, with Richards in the right-back position. He receives the ball from the centre-back and dribbles past a wide defender, thus luring players towards the right touchline. Richards knows this movement and completes a difficult through pass from the wide area into zone 14, one of the most dangerous areas on the pitch, where his attacking teammate has appeared through the widening of the opposing centre-back gap.

As a centre-back, let alone one that plays in a possession-dominant system such as Bayern Munich, Richards’ basic passing statistics are strong. Centre-backs receive less pressure than their midfield and forward teammates and also have more potential passing options, so basic statistics such as passing frequency and percentage aren’t strong metrics to utilise in support of Richards. That said, Richards’ aggression also can be seen in his passing. Below, the length and colour of his passing radars indicate he prefers to pass progressively and does so accurately. 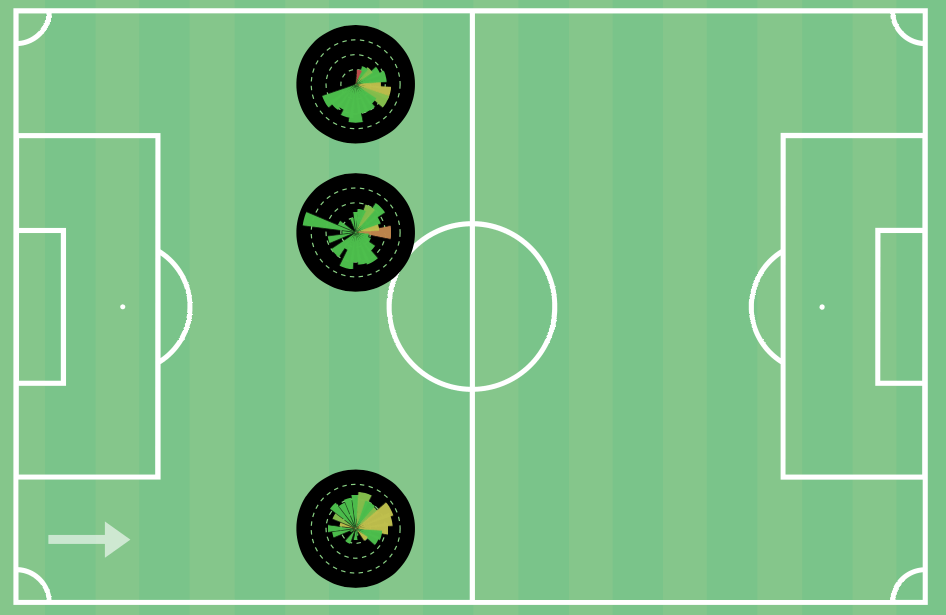 In fact, his most accurate progressive passes are those between 30-40m of distance (86.8% accuracy). The effectiveness of his passing is also observable through advanced statistics; his 0.36 xGBuildup per 90 minutes is among the best in 3. Liga. It is however almost inevitable that along with this combination of high-volume and aggression comes a less-than-stellar amount of possession losses (3.36 losses in own third per 90 minutes), but picking the right moments to attempt these passes is something that can be taught over time.

The figure below is a good example of Richards opting for higher attacking outlets over nearer possession outlets. Despite there being a number of visible passing options available here, Richards uses the time he has on the ball to find the attacker making a run in behind the opposing backline. In this specific scenario, his attacking teammate Joshua Zirkzee unknowingly cuts off the pass before it can reach the space behind the backline, but the fact that Richards attempted the pass and nearly completed it is eye-catching for managers wishing to use an aggressive centre-back in their attack. It’s this level of skill, vision, and willingness that has drawn interest from clubs such as Chelsea, Arsenal, and Barcelona.

Richards does struggle to generate crosses, which would further the argument that he should be utilised in the future as a centre-back and not a full-back. Additionally, Richards became a key contributor as a centre-back in the United States U-20’s 2019 World Cup campaign and is on track to become a core component of his national team.

To conclude this scout report, it is evident Chris Richards has his best years ahead of him. His versatility, timing, and composure on the ball are highly coveted traits alongside his physicality. Upon analysis, his time in Bayern Munich II not only gave him ample experience to build off of but also provided him with familiarity and knowledge of an advanced, first-rate system. Playing alongside other highly-touted youth prospects such as Jann-Fiete Arp, Sarpreet Singh, Joshua Zirkzee, and Michaël Cuisance, Richards has recently stated he feels he deserves minutes with the Bayern Munich first team. With the Bundesliga planning to get back underway shortly, his opportunity could be here before long.