Alan Virginius: Why the 18-year-old is being closely monitored by Bundesliga clubs – scout report

Alan Virginius’ debut season for FC Sochaux in Ligue 2 showed us flashes of his potential since he played a small number of minutes. Even with limited minutes on the field, the youngster caught the attention of Ligue 1 side Stade Rennais and Bundesliga clubs Wolfsburg and Borussia Moenchengladbach. Since last season participants in the Champions League are monitoring him it means he is already showing high potential.

This scout report will contain a tactical analysis of Virginius’ attributes and his playing style. Through the analysis, we will try to mention what are his strengths and weaknesses.

Alan Virginius is 18-year-old and Transfermarkt values him at € 300k. Virginius is listed at 175 cm and he is predominantly right-footed. In the Sochaux tactics, he was mostly used on the right-wing in a 4-2-3-1 formation. He collected 565 minutes in 15 appearances and managed to score three goals and assist twice. Virginius is leanly built and he possesses an electric pace which helps him beat the opponents especially on wide areas. 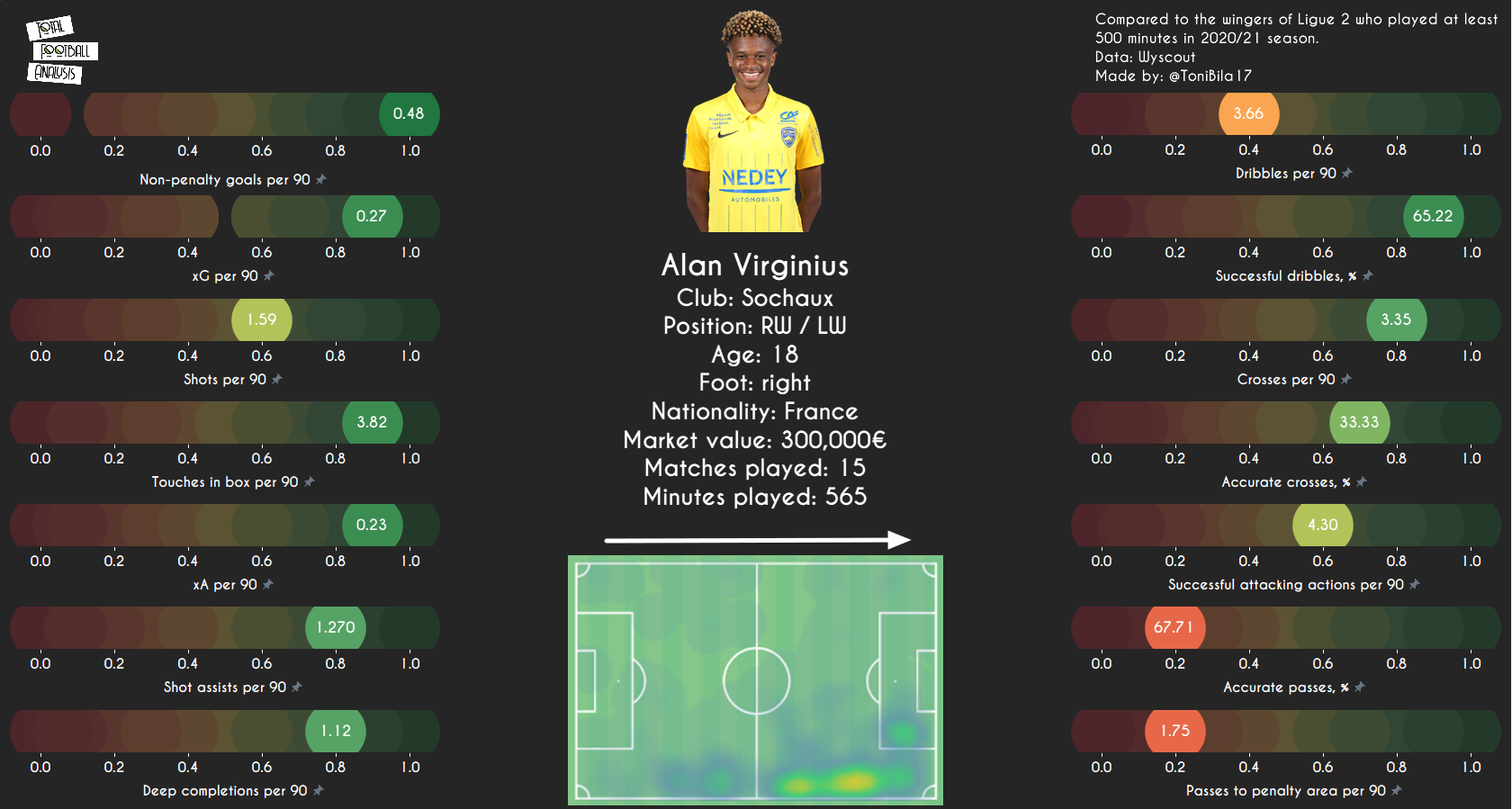 In the image above we can see how Virginius looks compared to the other wingers in Ligue 2 who played at least 500 minutes in the 2020/21 season. We can see on his heatmap that he is ordinating on the right side of the pitch most of the time. This visual shows us his per 90 metrics and his numbers are pretty impressive especially when it comes to his ability to threaten the opponents’ goal.

Virginius averages 3.82 touches in the box per 90 which shows us why he is getting 0.27 xG per 90 given the fact he knows how to get into opportunities in the penalty area. He is best amongst the wingers when it comes to non-penalty goals with an average of 0.48 per 90. Virginius is also a good creator for his team showing quality numbers in expected assists, shot assists and deep completions. His dribbling skills and flair are often the reason why he is so successful in 1v1 situations and one of the most effective dribblers in Ligue 2 with a 65.22% success rate. He likes to dribble on his outside before attempting a cross into the penalty area, even though he is quite a good crosser he still needs to improve his decision-making on crosses which will be evaluated further in the analysis.

In this section, we will see Virginius’ most common off-the-ball movements and also what he does when he receives the ball in certain areas of the pitch. 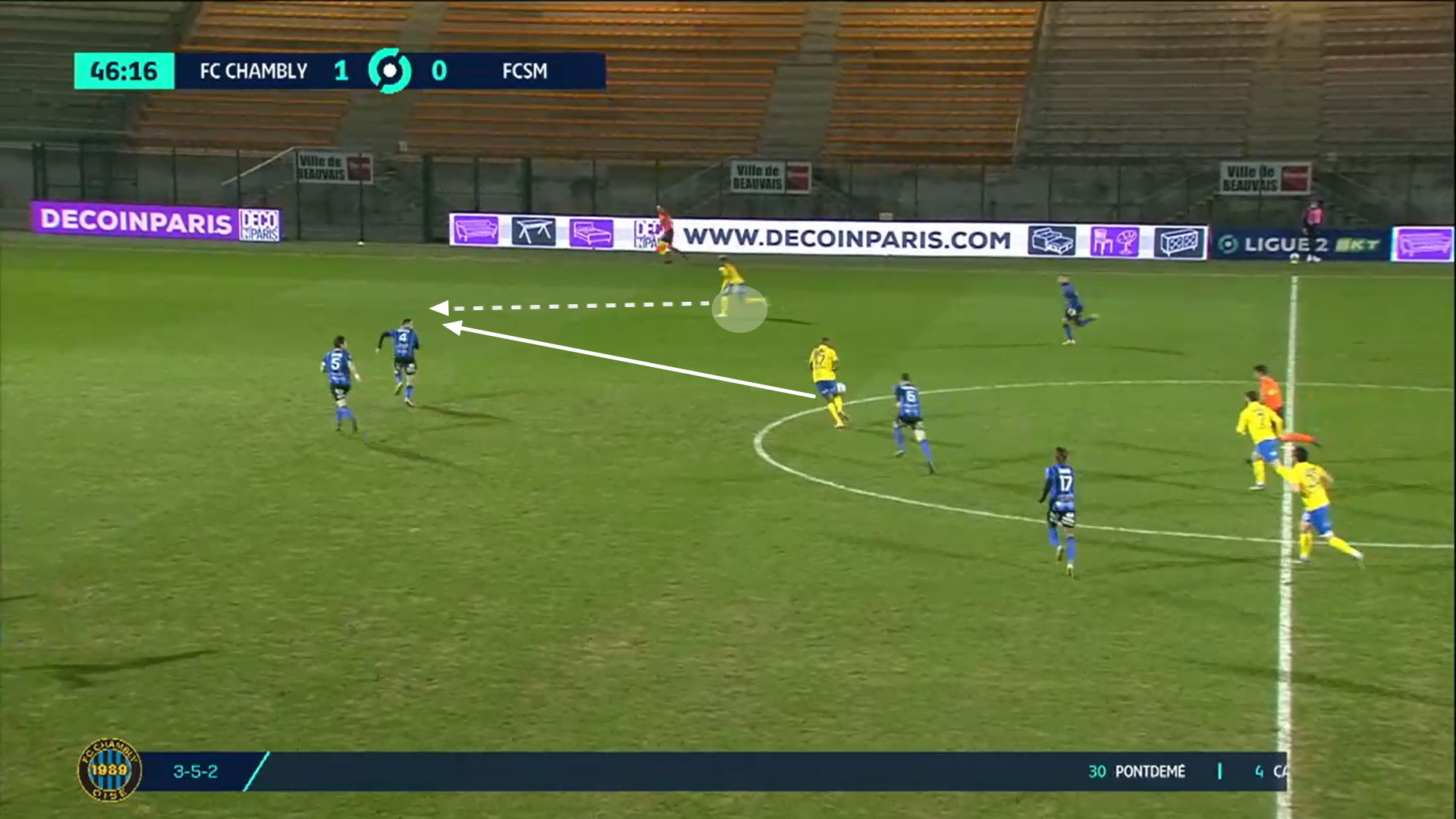 First, we will mention his ability to make quick reactions in offensive transitions and that he thrives in those situations. Virginius pace and awareness are the reason why he can make a big impact in the counterattack. He is always waiting for his team to be close to recovering the ball and already starts moving forwards which gains him a few extra steps over the opponent and when the team regains possession he accelerates into the open space to receive the ball. These situations suit him very well because he isn’t physically strong and getting the ball in a wider area makes it hard for the defenders to get close to him because of his pace. Virginius, when getting close to the penalty area, chooses to go for a shot or to try getting into position to create a tap-in situation for the forward in the 6-yard box.

The next example will show us how Virginius spreads the defence and then makes runs in behind. 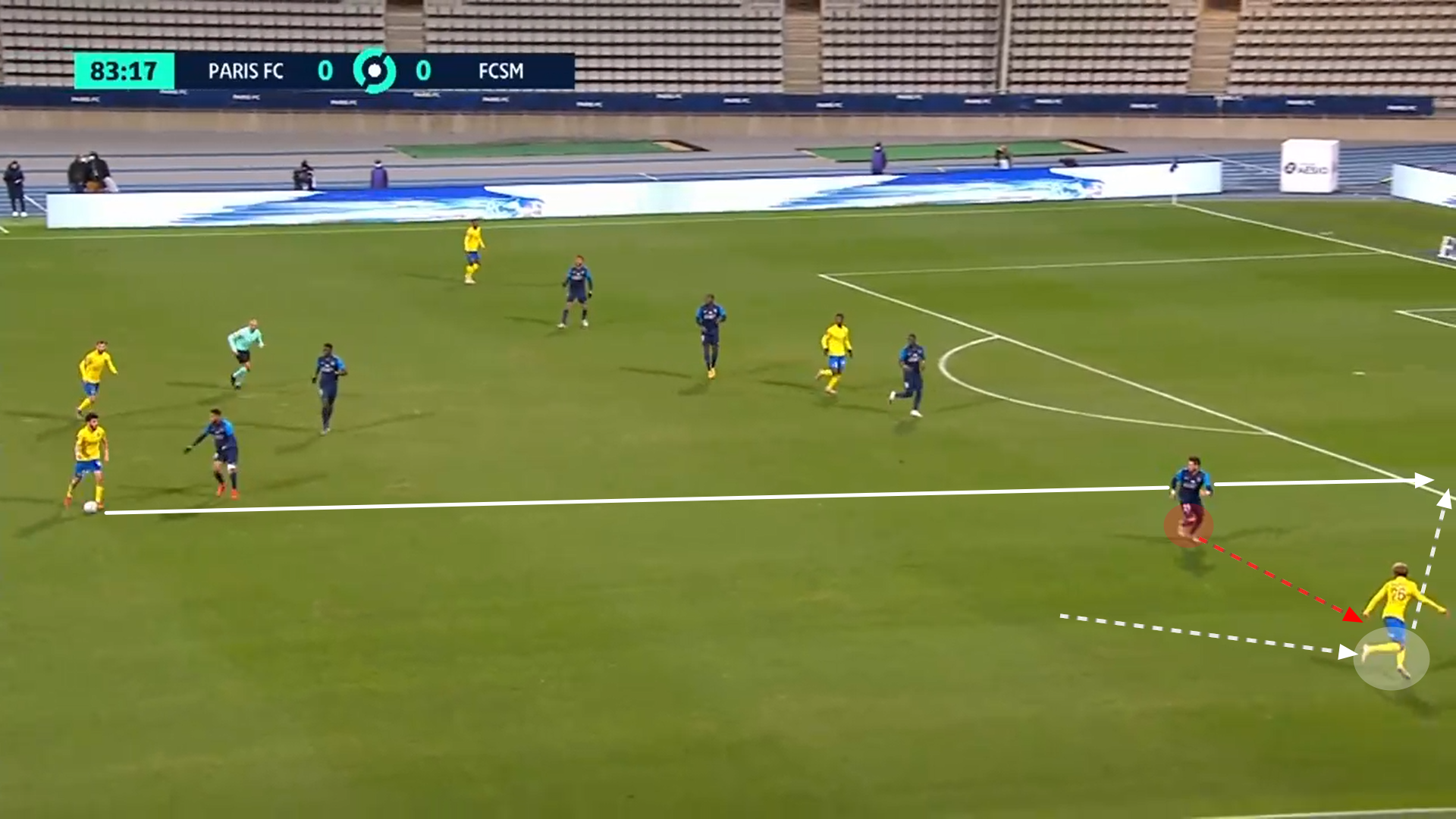 Full-backs often try to close the distance between them and Virginius because he is a skilled dribbler. In those attempts to close space close to Virginius it opens the gap between them and centre-back which can be exploited with through ball. Given his abilities, it is hard for a full-back to single-handedly deal with these kinds of situations and centre-backs need to be closer if they want to stop him. Allowing him space to receive the ball wide into his feet without pressing him instantly gives him an advantage over the defender in 1v1 situations because he drives with pace to beat the player. 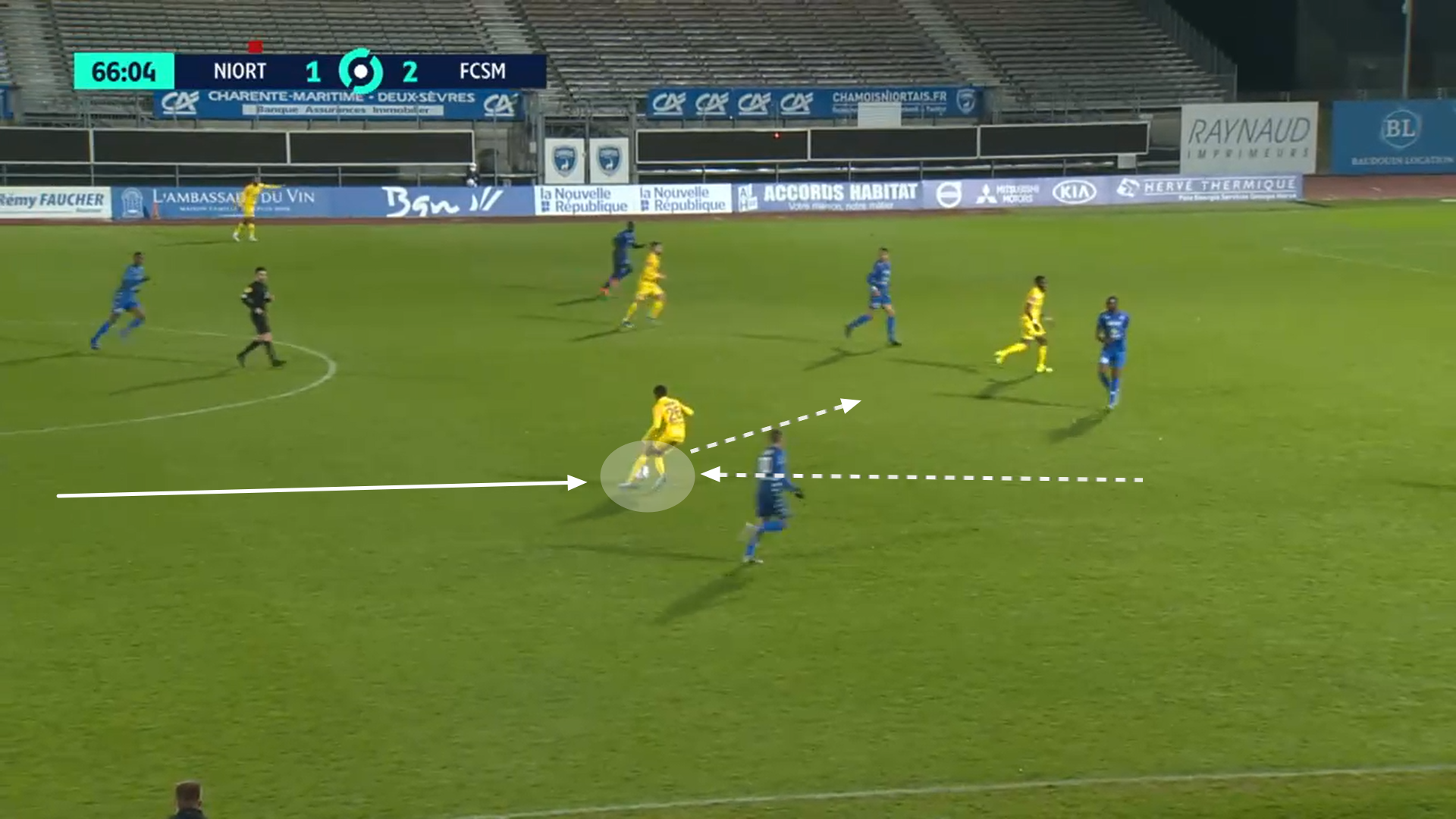 Virginius is capable of receiving the ball in the halfspace as well by moving inside separating from his marker. When receiving the ball in that area and turning with his face towards the goal he can make chaos with his run directly towards the goal. He has the vision to make decisive passes in those situations even though he is still raw and could improve his pass weighting. The other solution for him is to try and finish the action by himself if his teammates open enough space for him to make a run with the ball into the penalty area. This is something we could probably see more from him when playing as a left-winger because of his tendency to cut inside on his stronger right foot.

Virginius showed the ability to cross, dribble and score goals, but he needs to improve his decision-making. Just like all the youth players, he is adjusting to the pace of senior football and through the adjustment, we can assume that he will improve his decision-making as well. His crossing is the ability with which he can create a lot of goal-scoring opportunities for his teammates when he improves his awareness of the situation inside the penalty area rather than just targeting the centre-forward.  Of course, he created a lot of chances with crosses this season as well, but when we talk about improving to play at a higher level this is the area where he has high potential when playing on the right-wing.

Defensively Virginius is very active and tries to help his team in the defensive phase. He shows a desire to track back full-back and prevent the opponent from getting into 2v1 situations with full-back on his side. Virginius has the ability to react quickly and contribute to pressing actions, but the situation below will show us his reaction in pressing which needs improving. 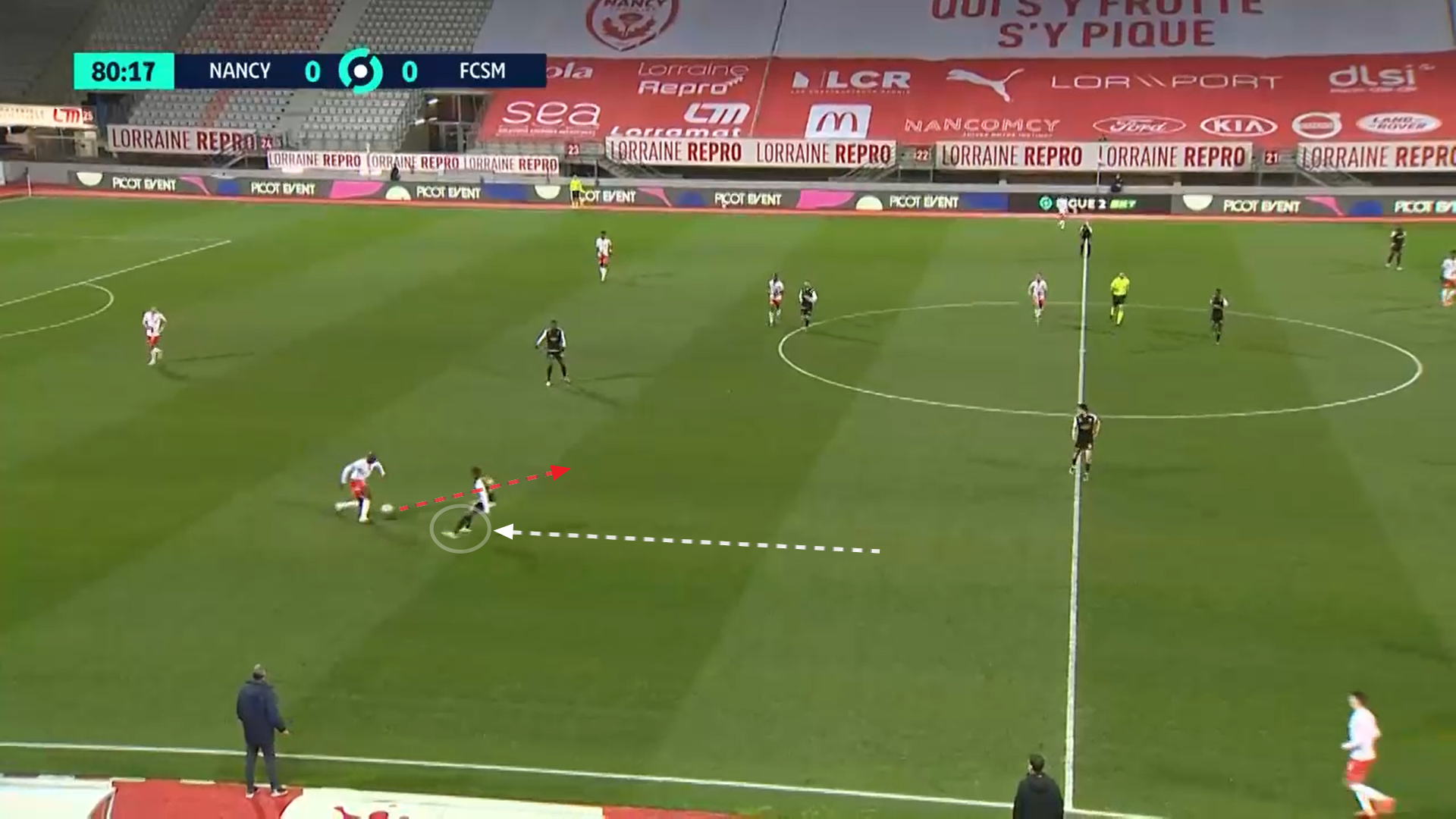 Because of his pace, he often tries putting pressure with top speed which can be exploited easily especially by experienced players and those with good awareness and ball control. In this image, we can see him getting close to the opponent and just by his body posture it is clear that he has low chances of dispossessing him. He is flat-footed on the ground with his legs in front of the body because he stopped after running at a full pace which makes the job easier for the opponent to get past him since his body prevents him from moving sideways to close space. It is also important to cover the central area and not allow the opponent to progress through the middle, which is much more dangerous than letting him progress on the flanks.

Virginius surely has the ability and desire to make an impact on the defensive end as well. He played at most 71 minutes of the match this season and it would be good to see how much intensity in both directions he can offer through the course of the whole match. This raises a question over his stamina and conditioning even though it could just be that Sochaux is trying to slowly introduce him into senior football.

This analysis gave us information on Virginius abilities and how he makes an impact on the pitch. It isn’t surprising that he is already wanted by bigger clubs even after only 565 minutes on senior level. Virginius can make a difference on both wings and he showed the ability to both create and score which is a good sign in his debut season. We are looking forward to his progress next season whether it will be in Sochaux or in some better club and league. 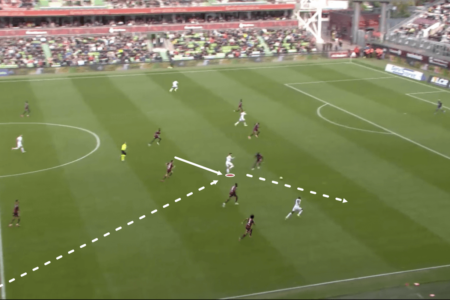 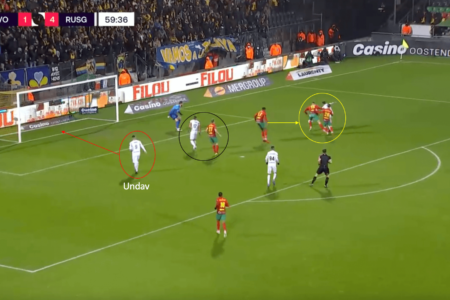