Sir Alex Ferguson vs Marcelo Bielsa! In the 2011/12 campaign, Manchester United were knocked out in the UEFA Champions League group stages as the third of the group. When many predicted the Red Devils would be a strong contender in the UEFA Europa League, instead, they drew Athletic Bilbao and lost both legs.

Almost a decade ago, Real Madrid and Barcelona were still the best in Spain, but Bielsa’s team should never be underestimated. With the Argentine coach’s philosophy, they were a strong force and gave United a difficult cup tie.

In this tactical analysis, we will show you how Athletic Bilbao beat Manchester United 3-2 at Old Trafford. In this analysis, we will focus on showing how the team from Basque exploited the structural issues of Ferguson’s men particularly.

Sir Alex Ferguson played many regular starters for the match, especially reliable forces like Rooney and Evra. Intriguingly, Jones was the partner of Giggs at the midfield, both of whom were not in their most comfortable positions. These two players shared a tremendous workload and it was a little bit too much for them.

Bielsa’s Bilbao had a pretty young squad and the players were full of potential. Many of them became famous players to play at the big clubs, for example, Martínez who is at Bayern right now and Herrera at Paris Saint-Germain. In that 2011/12 campaign, Llorente was in excellent form and his performance for the game was decisive.

Unlike many teams nowadays, we could hardly divide United’s offensive tactics into build-up phases and the others. The key element of their attacks was the rotations, as players were encouraged to roam their position. Through continuously exchanging positions, spaces were generated, and the players were more likely to get rid of the markers.

Since Jones and Giggs were playing at the centre, United did not have a deep-lying playmaker or a pivot to start the attack or circulate the ball from very deep. In fact, they relied on the centre-backs to carry the ball forward, deep into the oppositions’ half. If Rooney was free, finding the No. 10 was favourable, but if he was not, they then had to look for the wide options. Usually, they were the wingers and if they left their positions, spaces were opened for Rafael and Evra at the wide corridor, who pushed forward to provide the width in the attack.

A benefit of rotating the positions was to confuse the opponent, and because of the tight marking of Bilbao, they created space through the positional interchange. Chicharito was the man to provide the height of the attack, while Rooney dropped deeper as an option for the ball progression more often. Late runs and the third-man runs into the box from Giggs were difficult to track as well for the opponents.

However, even when the Red Devils were given 1 v 1 opportunities with space, the threat was limited as the physical quality and challenge intensity of Bilbao was high. Therefore, the impacts of the crossing tactic and release of full-backs were largely limited.

The below image shows the flexibility of United’s attack because of the positional interchange. Young dropped from the right-winger position to form a double pivot with Jones. His marker (LB: Aurtenetxe) was reluctant to leave his defensive zone to follow the winger so he was free to receive the ball.

Also, Young’s presence dragged the marker of Giggs out – as Herrera stepped out to stop him, the Welsh national became the free man between the lines.

After exchanging the passes, the ball eventually fell to Chicharito’s feet. When the attack was developing via Giggs and Rooney, Young already moved from his original position to the edge of the box. Since he began his run very deep, none of the Bilbao players were able to track him and he was totally free.

However, United also made too many suboptimal offensive decisions, such as picking the wrong options or missing the timings for a pass in this game. This example was not an exceptional case as Chicharito took too many touches, he missed the moment to release Young to face the keeper 1 v 1. 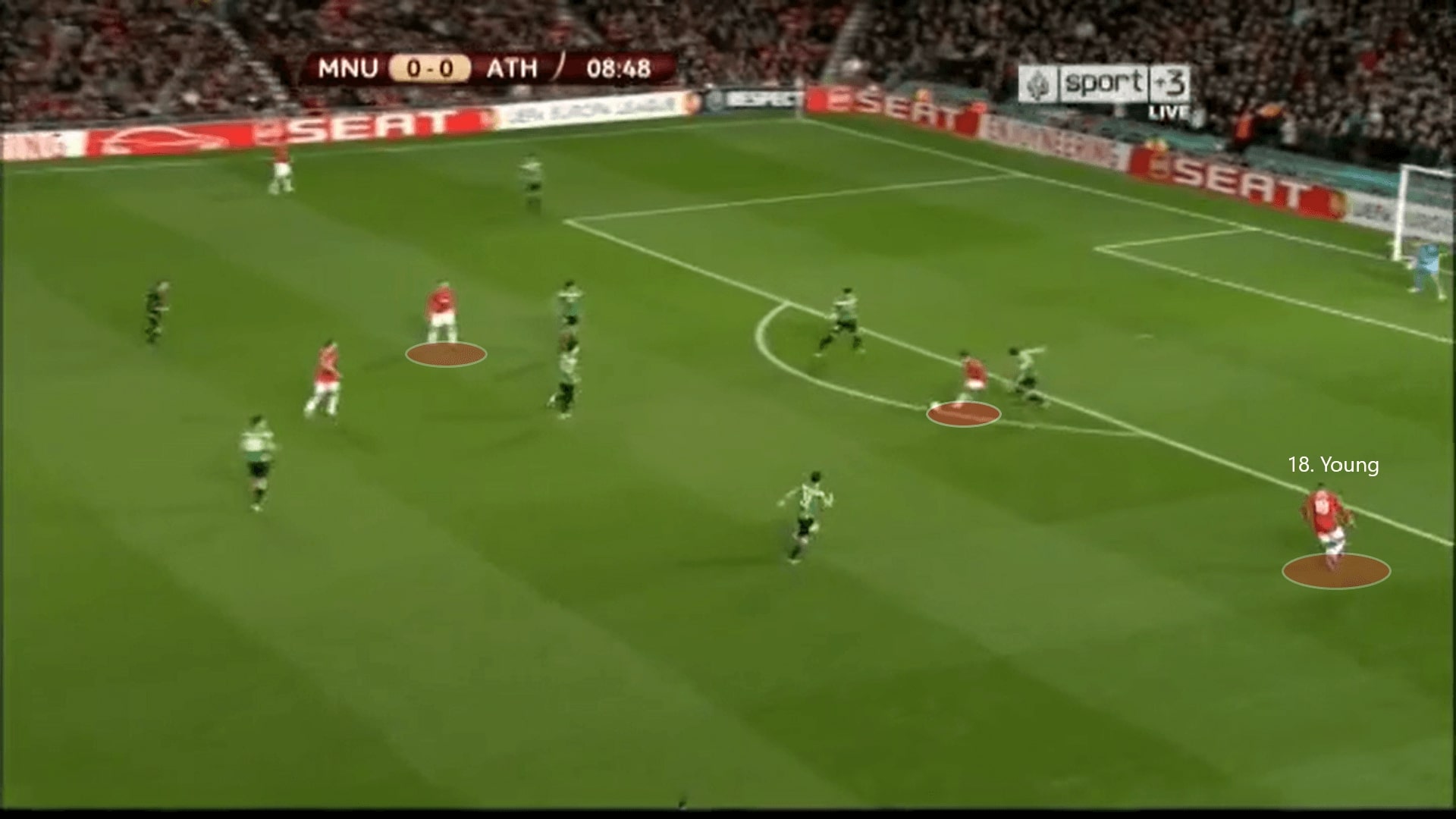 Although Bielsa’s defensive tactic was famous for its pressing intensity, the crazy pressure was not the theme of the team at Old Trafford. Instead, they were a bit conservative as they defended more in their own half. The marking on the targets was tight, so the players left the original position quite a lot. There was also a bit of an issue as the left-back Aurtenetxe’s most comfortable position was the centre-back. His positionings were a bit off in this game and the right half-spaces were exploited by United.

In this section, we are focusing on the pressing trap set by Bilbao. As mentioned, a large part of United’s attack relied on the progressive run of the centre-backs. Also, when Giggs and Jones stayed centrally, they were man-marked by the opposing midfielders tightly. Their dropping-offs were merely providing with wall passes to circulate the ball, without meaningful progressions.

In such a case, with the clever curved-run of Llorente, Bilbao set a pressing trap by luring either centre-back out. The objective was to shut half of the pitch with the Spanish forward’s body orientation and approaching angle, then to allow the ball to be progressed to the player-abundant, strong side and compress space. This was especially useful as Evans and Smalling were still young at that time, and when they were bringing the ball, they could hardly observe the pitch to find an optimal option.

As illustrated in this image, the shaded region was the half which cut by Llorente’s approaching angle. Including Llorente, it was a 6 v 4 situation on the ball side. When Evans carried the ball within the Bilbao players, he was facing pressure from almost all angles around him.

When considering the options of Evans, he had to move the ball wide because the central access was denied. By keeping the triangular midfield, Bilbao always won a 3 v 2 numerical advantage to cover the centre. From the above image, you could see De Marcos and Iturraspe were shutting the passing lane to the centre.

In this scenario, we showed the numerical advantage (8 v 5) created as United entered the pressing trap. Despite swapping his position with Park and freeing himself out wide, Giggs couldn’t find any options around him and he had to return the ball.

Offensively, Bilbao were exploiting the defensive structure with numerical advantages. In general, United defended in a 4-4-1-1 or a 4-4-2, with Rooney staying behind Chicharito on occasions. However, the coverage for the midfield two was insufficient, especially since Giggs was 37 already. The intensity and speed of the challenge in the centre were insufficient to stop the progression of Bilbao.

Bielsa’s men cleverly invited pressure by utilising the numerical superiority at the back. When United players were drawn high, the Spanish team would not hesitate to play long and find Llorente directly. Given the physical dominance of the target man, he could always lay the ball off to players around him such as De Marcos and Muniain – the third men. These third men often received the ball behind the midfield line of United and facing De Gea’s goal, producing an instant threat with pace before the recovery runs of the players. 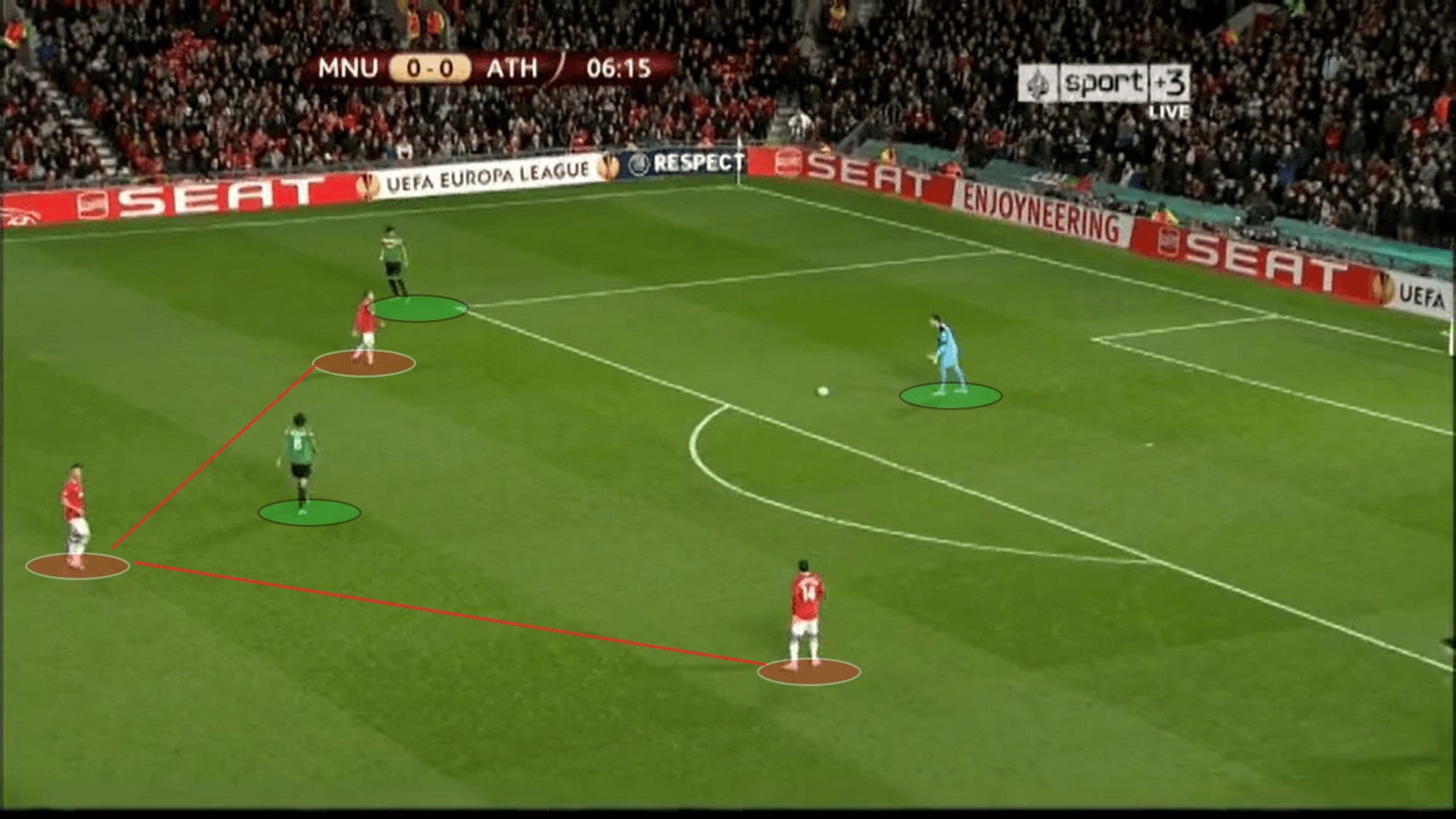 However, sticking to the dogmas to play out from the back was not the style of Bilbao. When the ball was played long as you could see, the four-man midfield was stretched out of shape. Bilbao already had players to occupy the space behind Giggs.

Higher up the pitch, Llorente was the player to control the ball from the air with his physical dominance. Meanwhile, Muniain quickly moved into spaces between the lines to look for the pass from the striker, and then continued to progress the ball with pace.

This example was the most typical event that summarised Bilbao’s attack in this game, how they combined the structural advantage and physical superiority to create shooting opportunities. 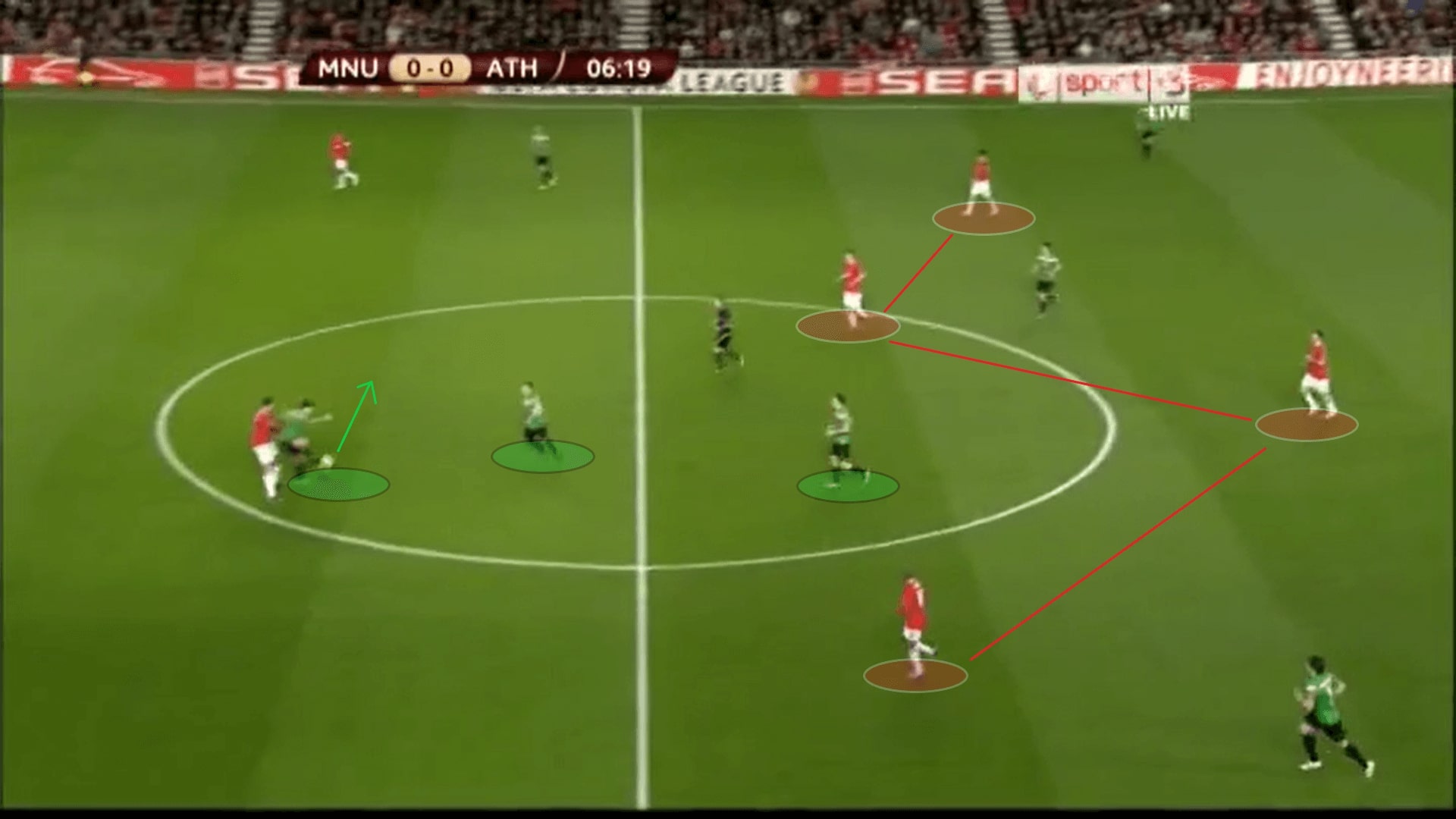 Because of the numerical deficit, United’s man-marking approach proved to be largely ineffective. Since it was always a 3 v 2 situation, Bilbao could unmask the passing lanes by rotations or movements to bring away the markers.

In the below image, you could see Michael Carrick was taken away by a player. The English international followed Herrera to the half-spaces, while the left-winger of Bilbao (Muniain) moved reversely to the centre and receive the penetrating pass which broke two layers of defence. 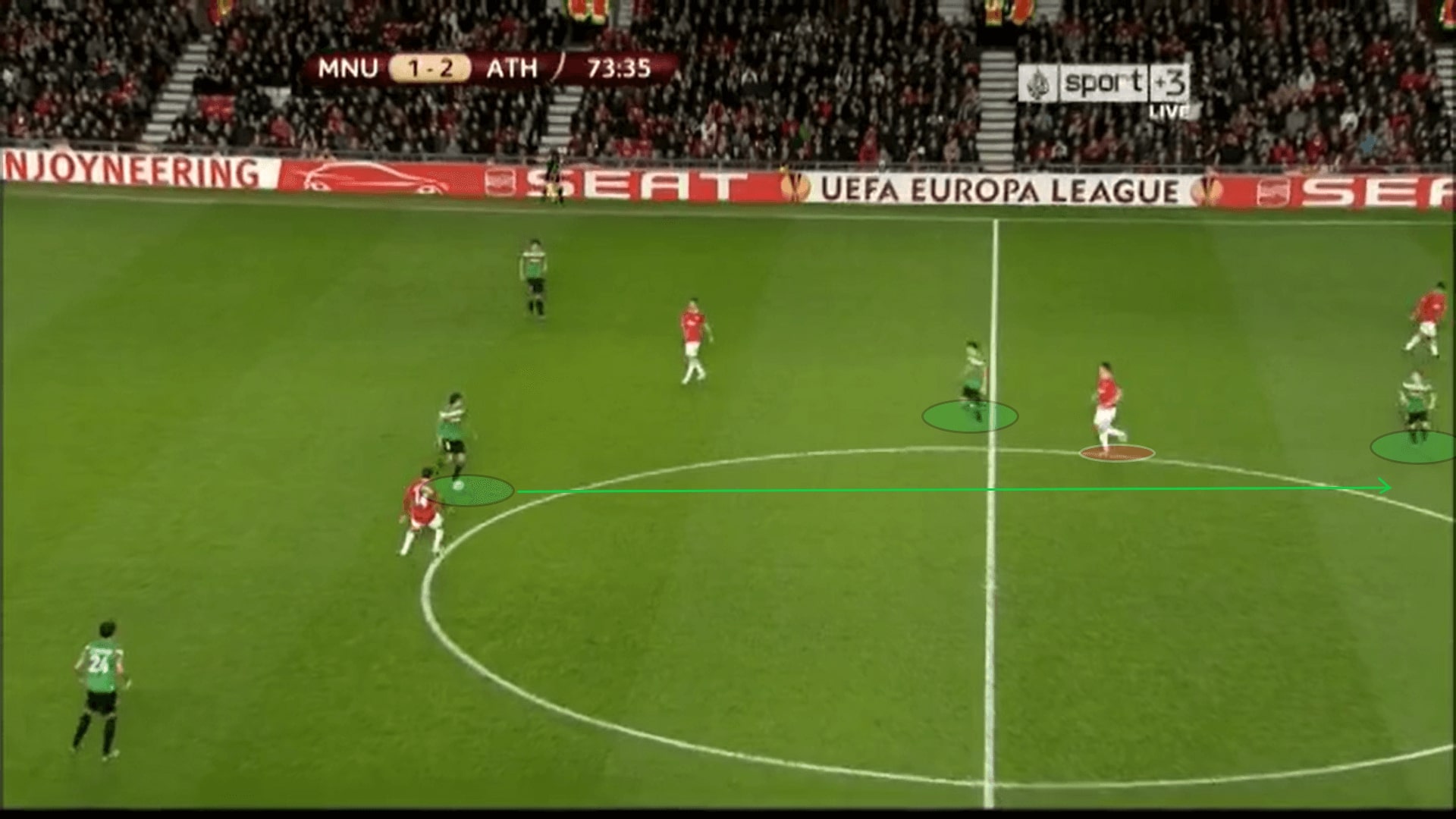 Bilbao also circulated the ball by exploiting the man-marking scheme of United. By moving the pair of Red Devils central midfielders, they opened the passing lanes to find the free players.

The below image is an example. Jones and Giggs were taken wide, hence why this opened space in the centre and a passing lane. The receiver could progress the ball further by exploiting central spaces uncovered by the United midfielders. 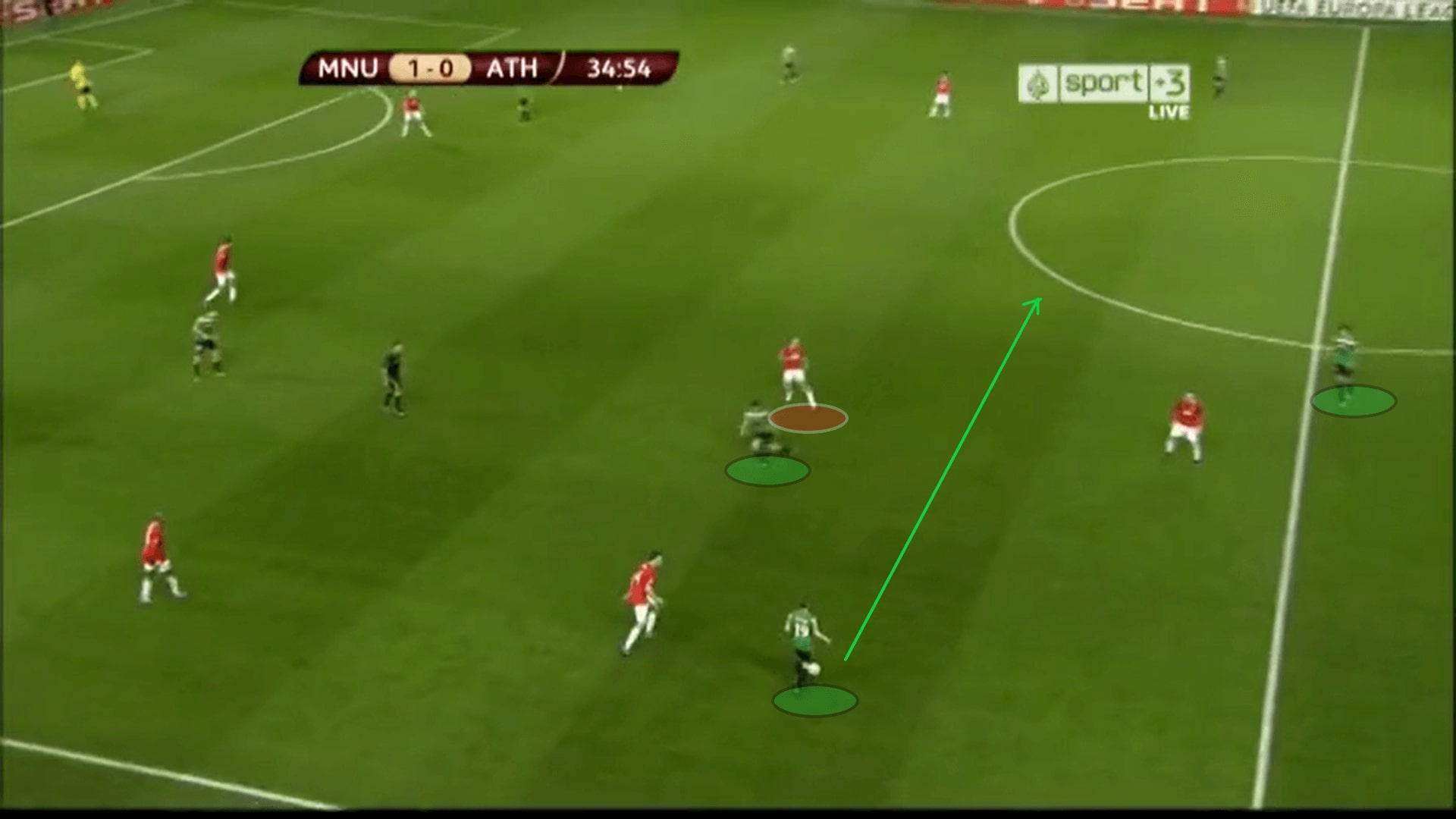 Another strong tool of Bielsa’s troops was the reversed movements to exploit the high lines. Since Llorente had the duty to find his teammates between the lines, he dropped behind the United midfield on occasions. This would trigger either centre-back of Ferguson’s team to leave their position.

In these cases, another option of Bilbao was to release the player who ran behind the defensive line. This was Susaeta in this image, as Llorente’s movement drew Evans’ and Smalling’s attention, Bilbao looked to release Susaeta. This allowed the Spaniard to attempt a 1 v 1 against De Gea. 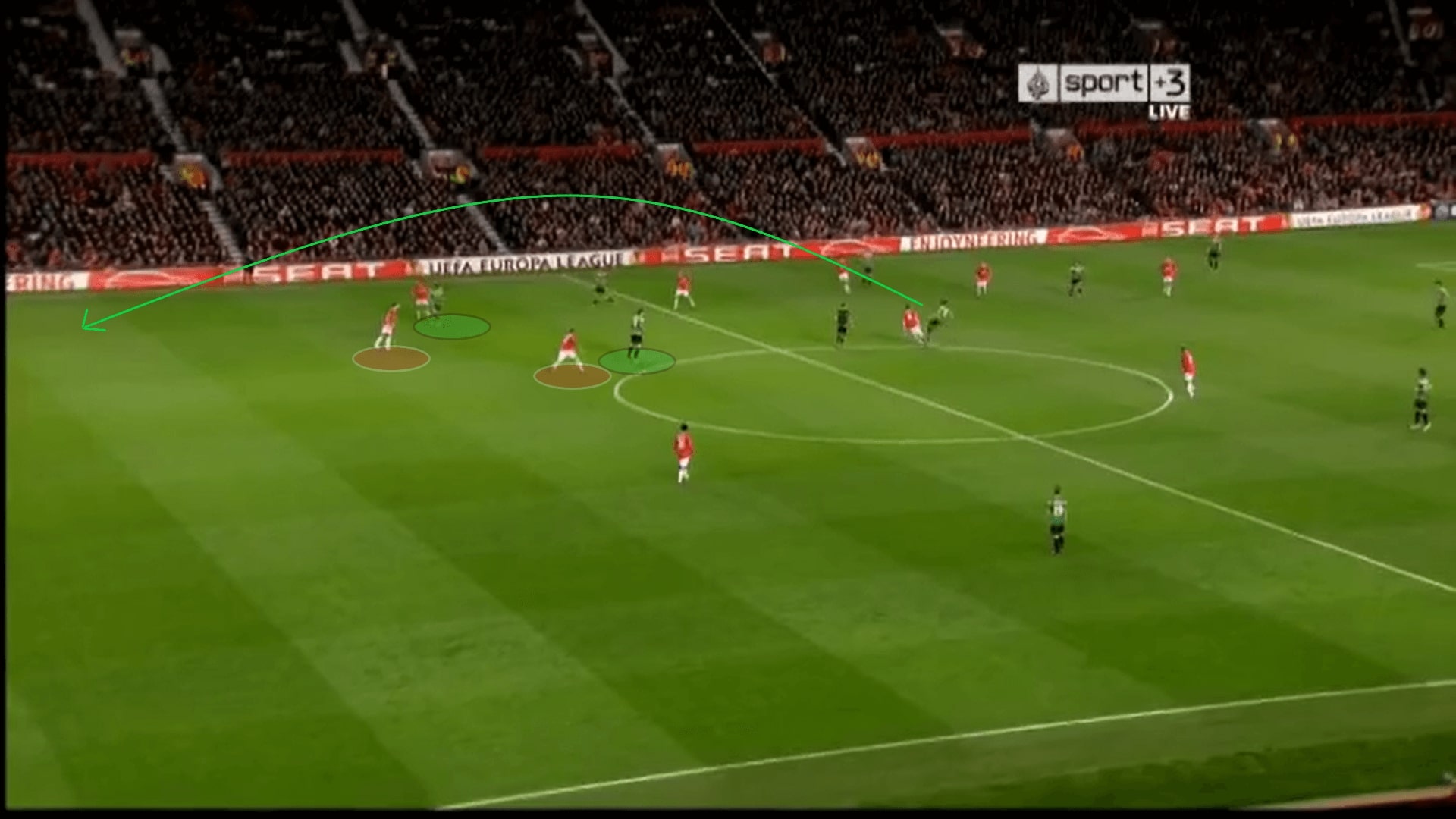 It was a very difficult game for United while Bilbao earned a well-deserved victory. Apart from their strategical press and offensive approach, this Basque team also ran a lot on the pitch. This was the reason why they were able to limit the impacts of United’s rotation.

In this game, they had plenty of chances as Llorente was unstoppable when he went for a header. Bilbao also exploited the left half-spaces and created good chances with runs between Rafael and the right centre-back, and if they were more clinical, United could have been losing by four or five in this game. However, Rooney’s late penalty kept the team alive and we will analyse the tactical battle for the second leg between these two teams later on this week.