European champions Chelsea faced off against the Italian giants Juventus on Tuesday night at Stamford in a crucial clash. Both teams were already through to the knockout phases of the prestigious competition, but the top spot was up for grabs.

This game was a clash of the titans in terms of two huge clubs locking horns but the idea of Thomas Tuchel going head-to-head against Massimiliano Allegri was mouth-watering for tactics lovers around the world.

The Premier League leaders were the favourites coming into this bout but the Bianconeri had won their last two matches and so were high in confidence too.

Nonetheless, it was Chelsea who got the better of Juventus in this game with the two sides locked on 12 points at the top of Group H. A very dominant 4-0 win for the Blues saw Trevor Chalobah, Callum Hudson-Odoi, Reece James, and Timo Werner all get on the scoresheet.

This article will be a tactical analysis of the game between the two European giants. It will be an analysis of what worked and didn’t work for each side that led to Chelsea taking all three points on game-week five. 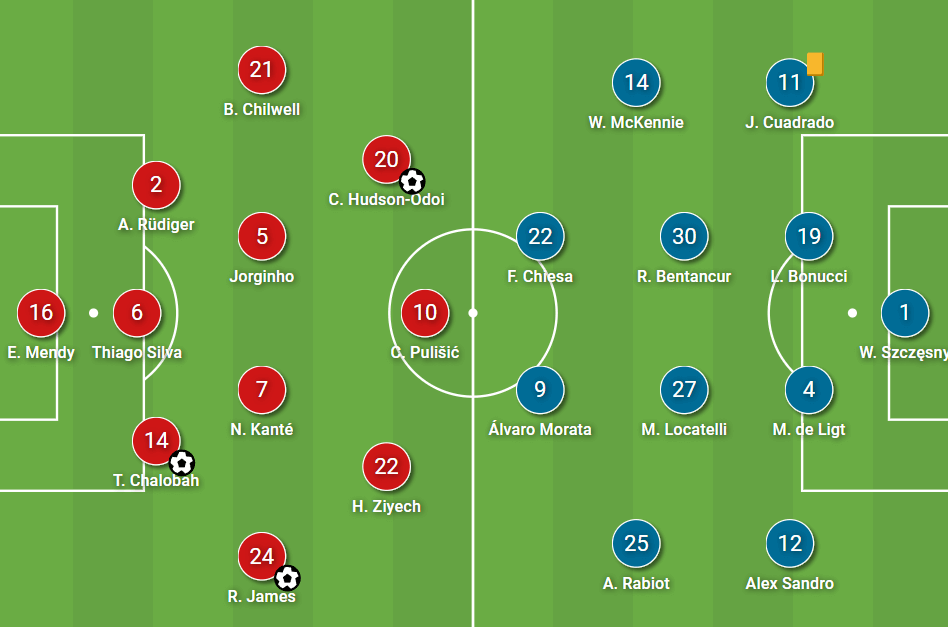 There were no surprises regarding the tactical systems which the two managers chose to start the game. Chelsea lined up in their usual 3-4-2-1 with the goalkeeper, the back three, and the midfield line all remaining the exact same from Saturday’s sumptuous performance against Leicester City.

The only personnel changes made by Tuchel were to bench Kai Havertz and Mason Mount who were replaced by Hakim Ziyech and Christian Pulisic. The latter led the line in what was a very fluid front three.

Juventus, on the other hand, switched to their typical 4-4-2 formation. In the previous game against Maurizio Sarri’s Lazio, the Italian team used a 3-5-2 with Danilo as a right centre-back alongside Leonardo Bonucci and Matthijs de Ligt.

On Tuesday, Alex Sandro came back into the starting lineup with Juan Cuadrado dropping to right-back in place of Danilo. Luca Pellegrini was also benched by the experienced tactician with Rodrigo Bentancur coming back into the team to create a four-man midfield comprised of four central midfielders.

Allegri knew that Tuchel’s side would be the protagonists in this match and so the head coach instructed his side to sit deep in a compact and narrow 4-4-2 low block at the edge of the box. 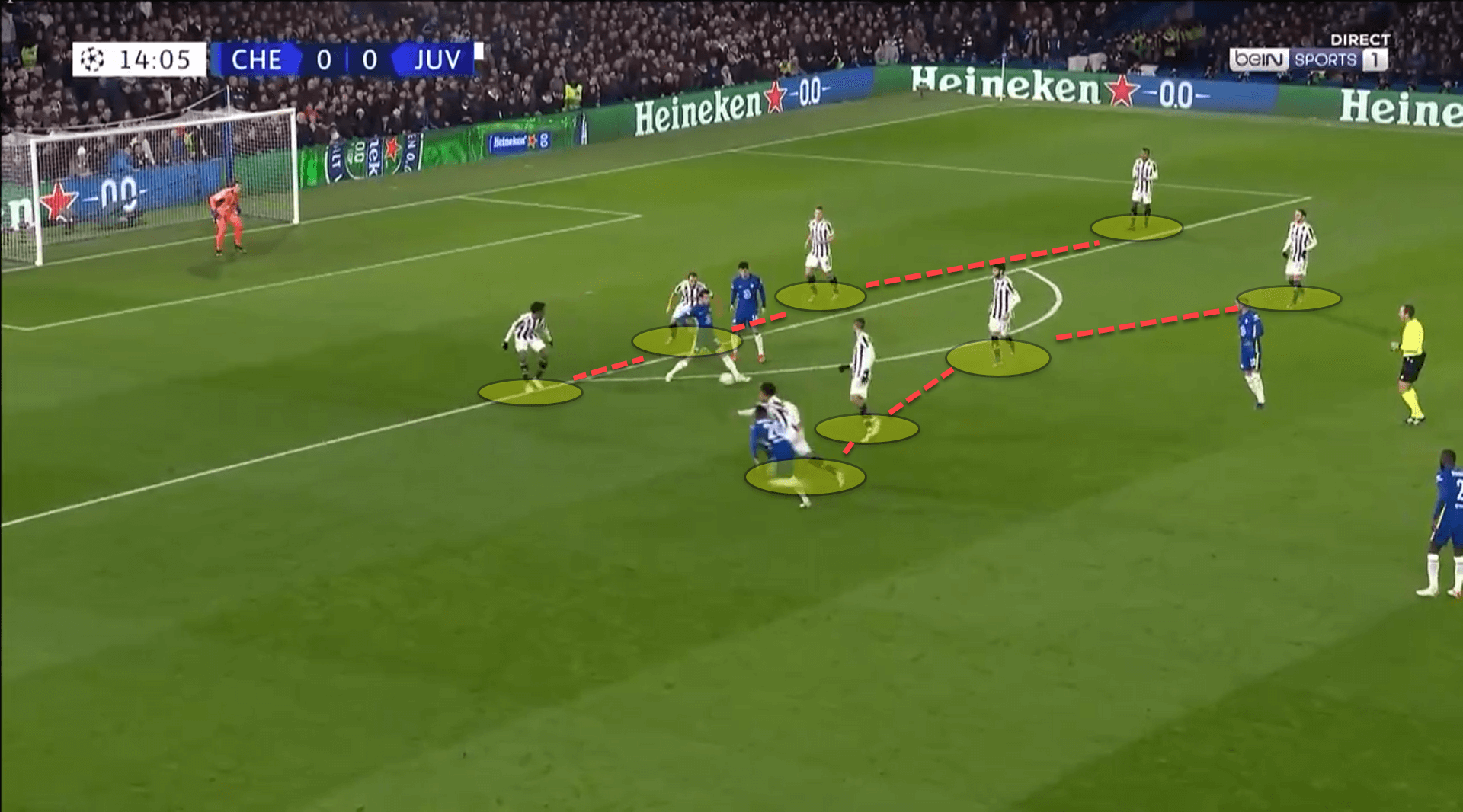 The idea out of possession was to soak up Chelsea’s intense pressure and subsequently hit the home side on the break. To do this, the centre-forwards generally positioned themselves quite high on the pitch.

However, Chiesa was pinned back for the most part by the positioning of Chalobah. Chelsea use their wide centre-backs quite a lot when circulating the ball in the middle and final third. It was Chiesa’s job to press Chalobah and cut off his passing lane in the low block phase. 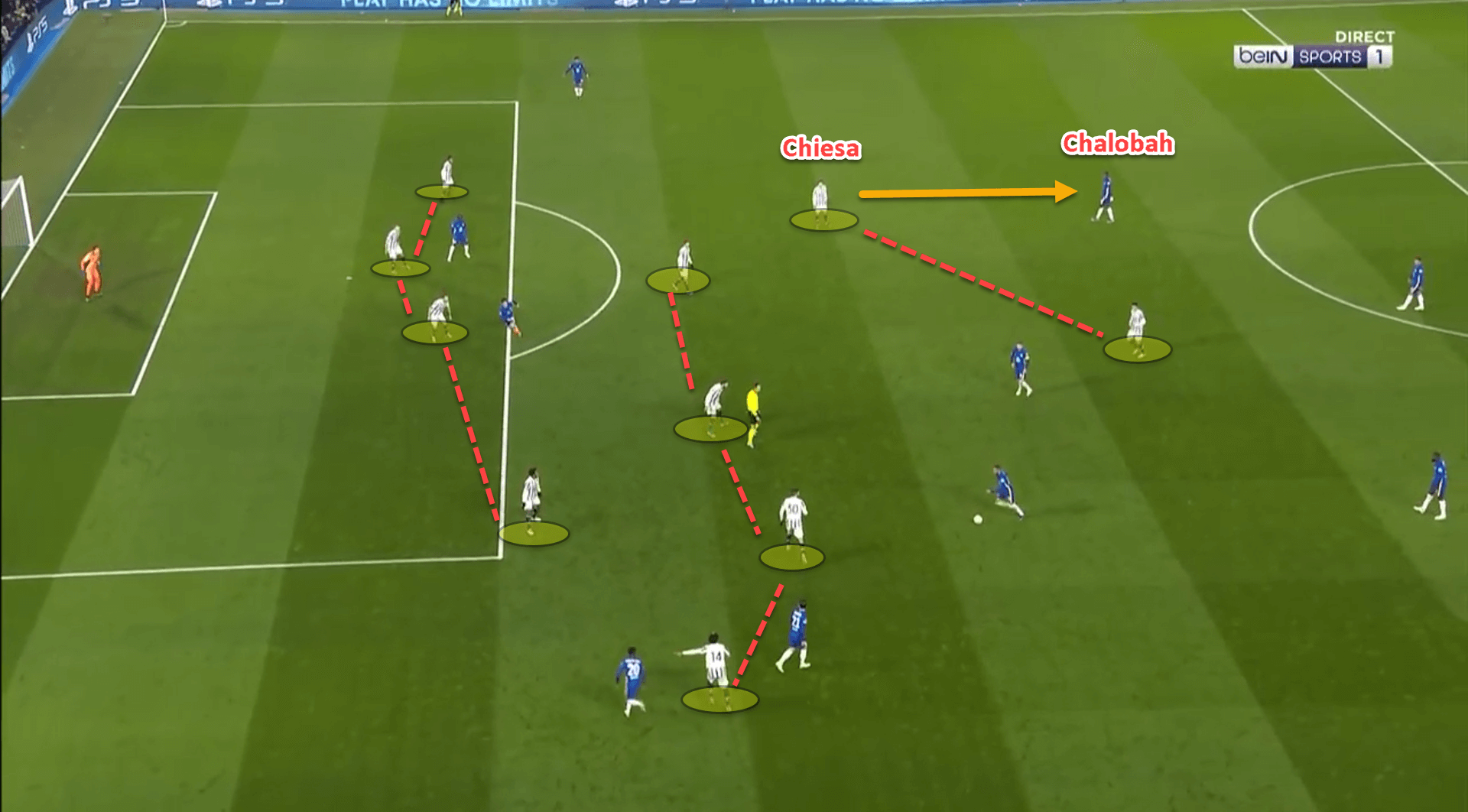 This made the shape look like a 4-5-1 when Juventus were defending in a low block, but it was simply just a rather lopsided 4-4-2 with Chiesa and Alvaro Morata positioning themselves wider in order to defend against Chelsea’s back three.

Chiesa’s wider positioning made it more difficult for any rhythm to occur on the counterattack when Allegri’s team did manage to turn over possession. This was because Morata was the only real outlet for the Old Lady. Direct passes to him on the break were predictable and too easy to defend against.

As Juventus were so deep too, the Spanish international would be forced to drop deep to receive the ball to feet on the break but with no support around him, Chelsea could regain possession easily. 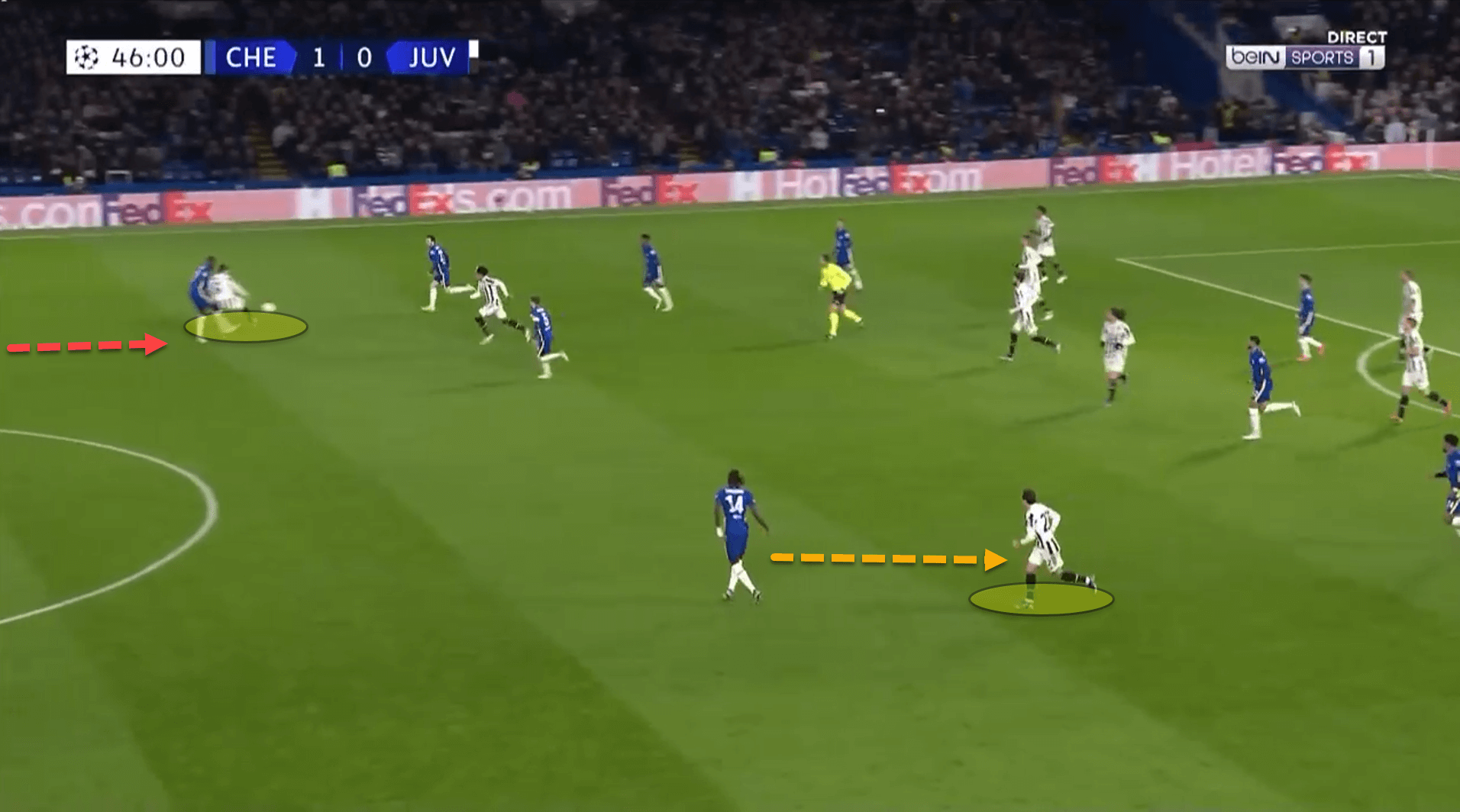 Here, Juventus are breaking out from their 4-4-2 lopsided low block and are looking to hit Chelsea in transition. The out-ball is to Morata’s feet with the ex-Real Madrid man dropping deep to receive.

Chiesa’s low positioning to mark Chalobah is detrimental to Juventus’ ability to hit the Blues on the break and there is no dangerous and realistic option for Morata. Antonio Rudiger simply gives away a foul and the threat is eased.

Chelsea’s structure in possession makes them close to bulletproof anyway due to the high positioning and aggressiveness of the three centre-backs, but Juventus shot themselves in the foot with their own defensive structure.

Quite often, the wide centre-backs of Chelsea would push up into the final third to overload the flanks and so would be in an optimal position to counterpress once possession was lost. 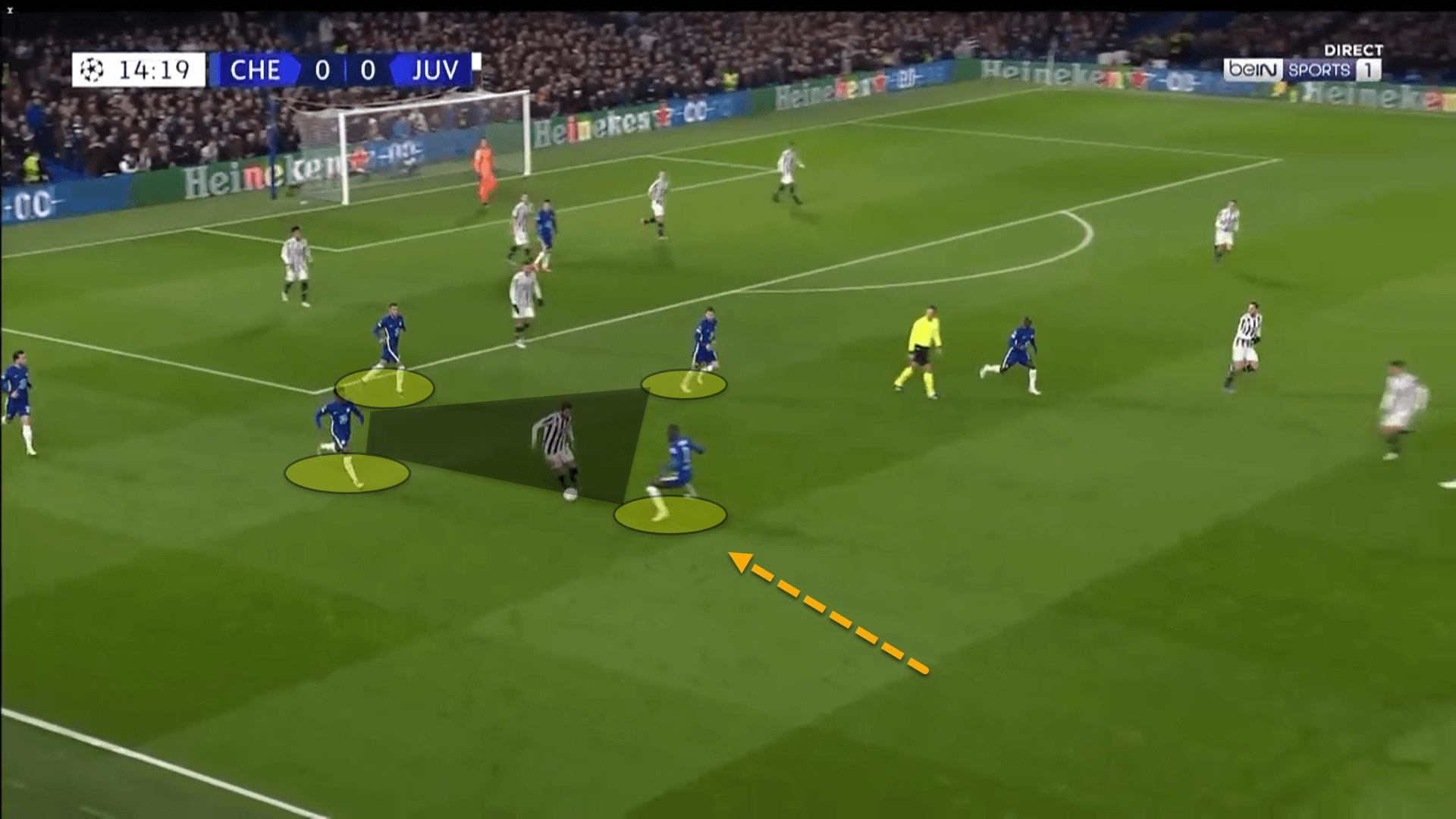 Chelsea’s counterpressing was ruthless as ever and Juventus could barely get out of their own half whilst transitioning from defence to attack. At Stamford Bridge on Tuesday, Allegri’s side did not complete a single counterattack, an indictment on the team’s tactical set-up. Defend as you mean to attack and attack as you mean to defend.

Juventus defended with no real attacking purpose and Chelsea kept them pinned back for large sums of the game.

Playing between the lines and to James

In true positional play fashion, Tuchel wants his side to be able to find the forward players between the lines of the opposition, particularly the two wingers and lone centre-forward who are constantly creating angles behind the opposition’s backline.

Generally, in the attacking phases, Chelsea’s structure resembles as a 3-2-4-1 or a flat 3-2-5. However, recently, one of the pivot players have been positioning themselves between the lines too in the right halfspace which switches the formation into more of a 3-1-6 or 3-1-5-1 depending on the positioning of the striker.

Kante was performing this role before he was brought off through an injury towards the end of the first half and Ruben Loftus-Cheek took over. 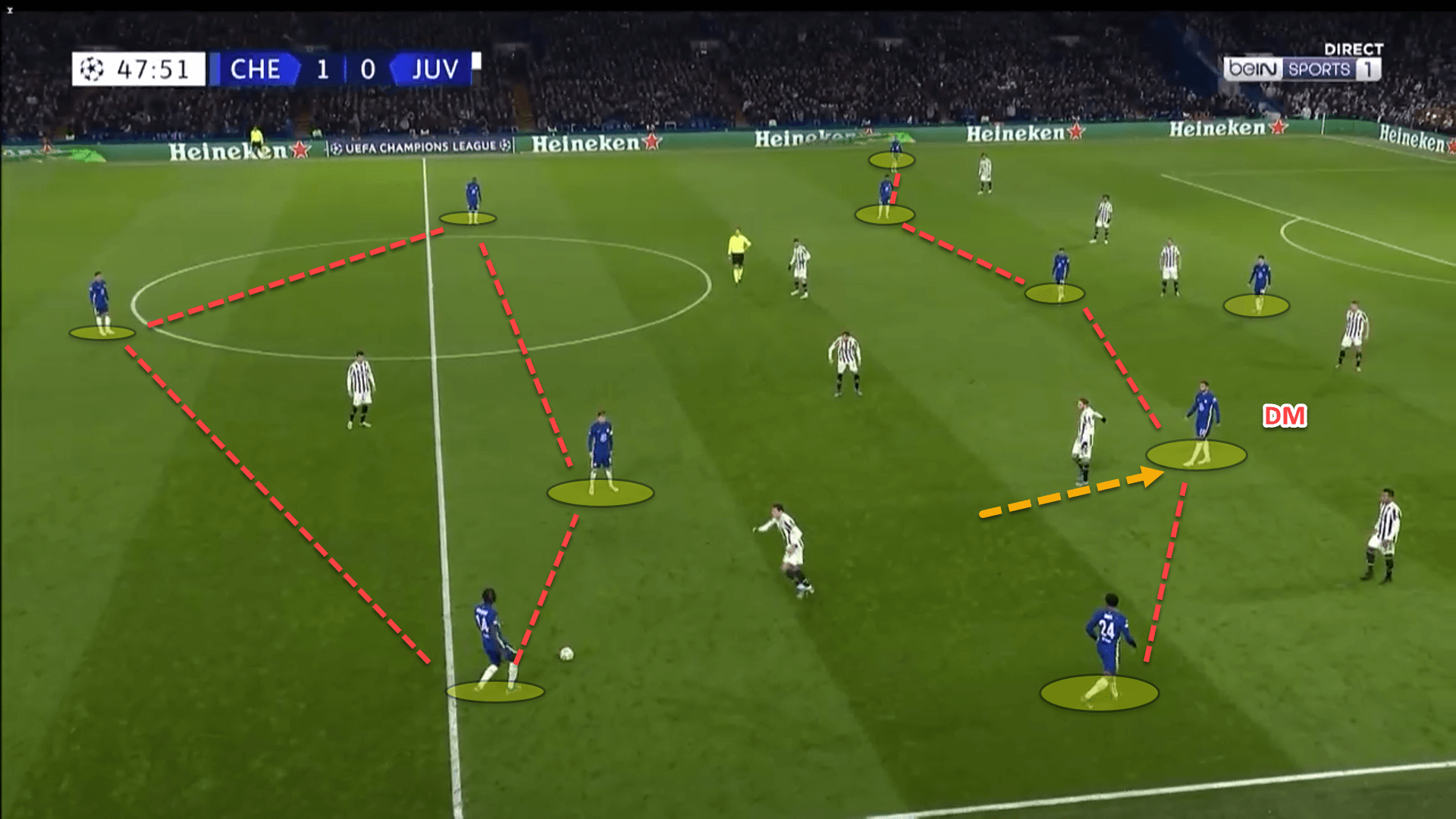 Here is the 3-1-5-1 structure that Chelsea were using in possession against Juventus on Tuesday night in this huge European bout.

By Loftus-Cheek pushing up into the right halfspace, it essentially leaves Jorginho alone as the lone pivot to find passes between the lines alongside the three centre-backs.

The reason this addition between the lines was extremely effective against the Italian giants was that it occupied Sandro at left-back and allowed Reece James to be free on the right flank. 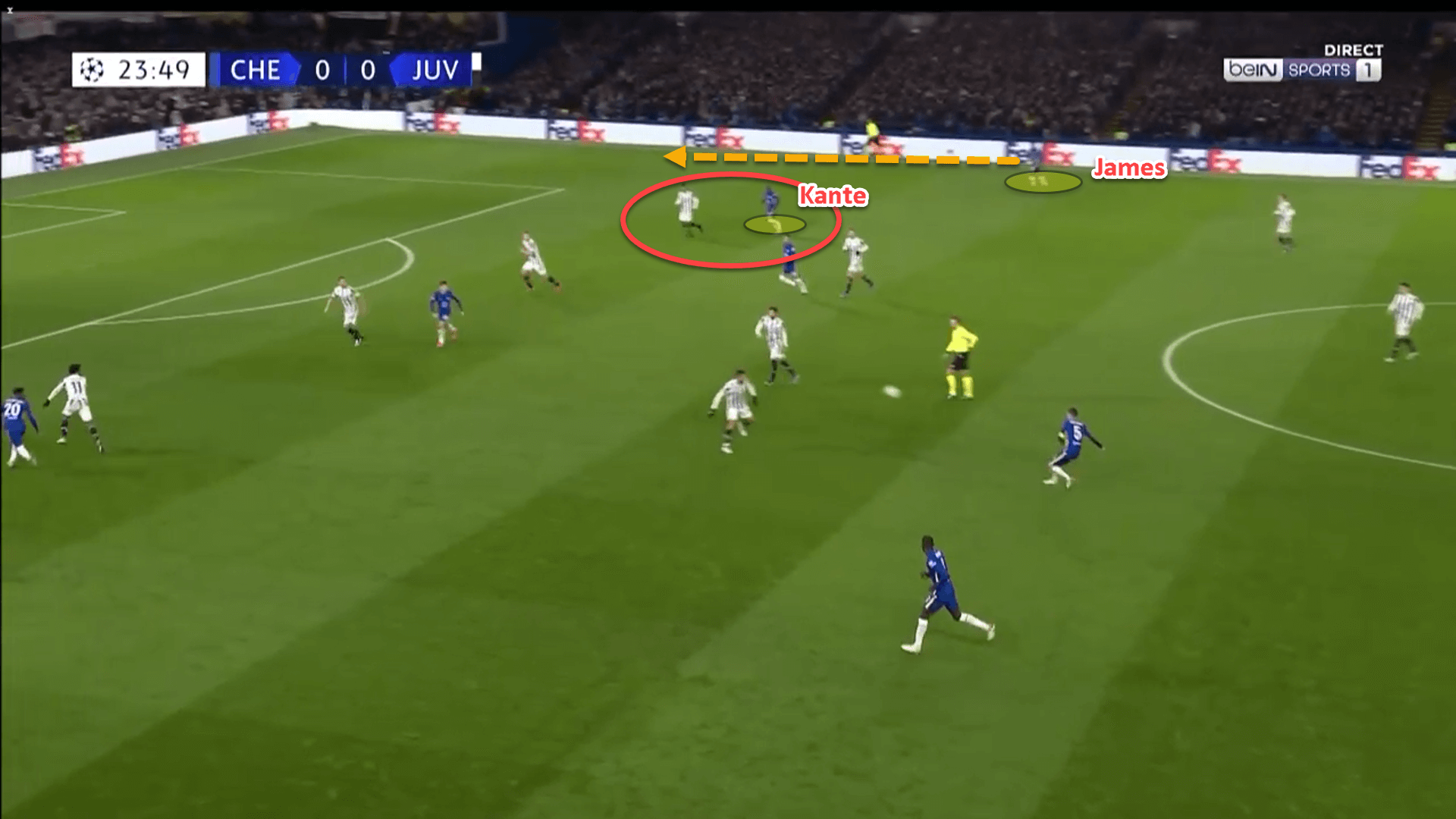 Due to the English fullback’s efficiency, having him receive the ball in space is a great attacking weapon. In this instance, Kante has pushed up into the right halfspace, occupying Sandro which has left James free on the right-wing in an abundance of space to receive from a switch of play. 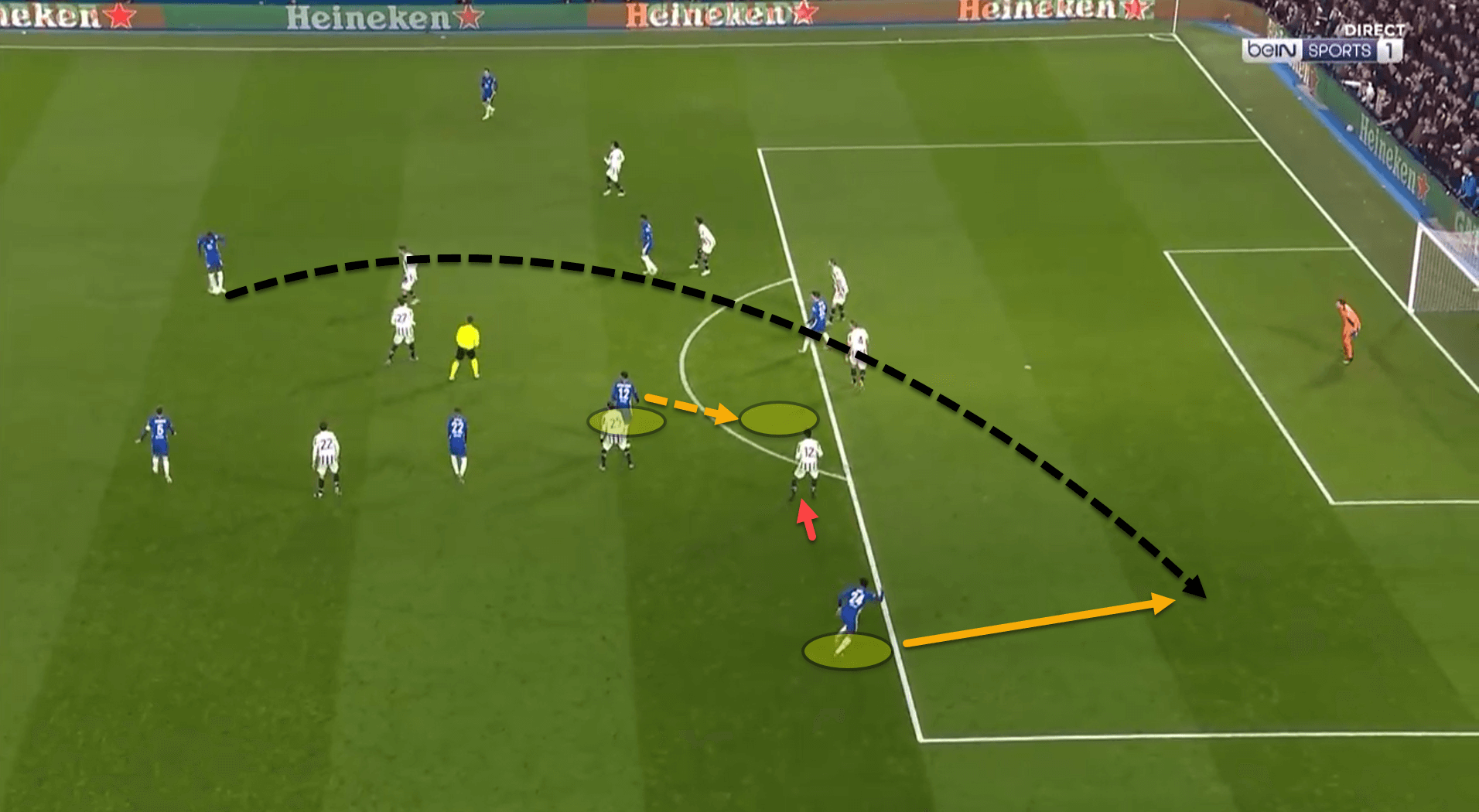 This is the move right before Chelsea’s third goal against Allegri’s team on Tuesday. Loftus-Cheek has pushed up between the lines, which has forced Sandro to come narrower, leaving James free on his blindside to make a run in behind.

Rudiger finds James with a wonderful ball over the top into the penalty area and the ball eventually finds its way to Hudson-Odoi who taps home another wonderfully worked positional play goal for the home team.

Allegri could have combatted this by switching to a back five which would have allowed Juventus to have one man over to track the run of James, but the Italian coach stuck with his principles and reverted to more of a 4-3-1-2.

Chelsea were excellent at reaching the space between the lines too which was helped by Juventus’ poor defensive set-up.

When Rudiger would receive the ball, Bentancur was tasked with pushing up to press him but the other three midfielders were not closing the space well enough and so Chelsea were able to play the ball into the area vacated by the Uruguayan midfielder when pressing. 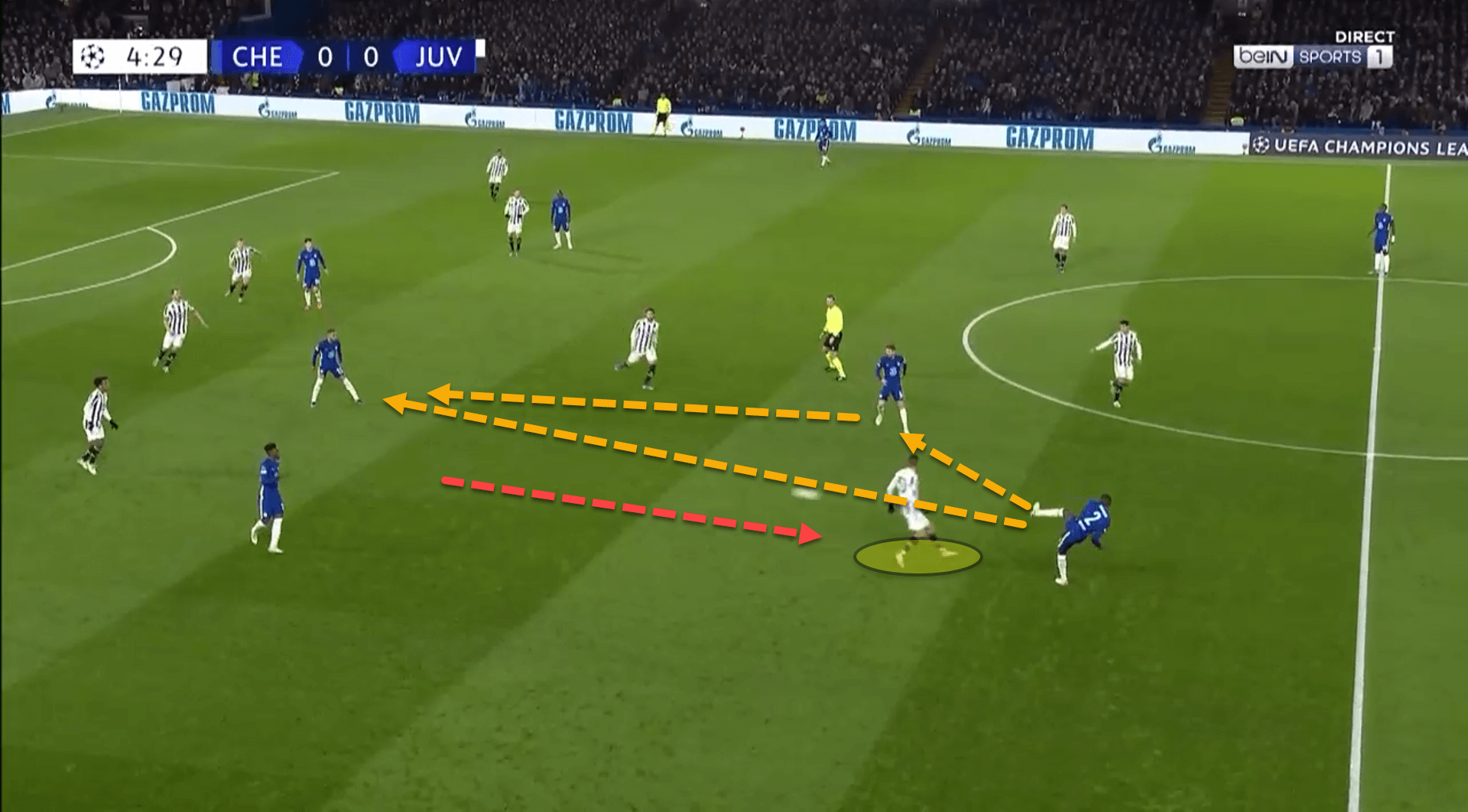 Here, Rudiger has possession of the ball. Bentancur leaves the midfield line to push out to put pressure on the German defender. However, the angle of his pressure is poor and Rudiger can easily slip it in behind.

The ex-Roma centre-back could have also used a short pass into Jorginho to reach the player between the lines as well which is how Chelsea mainly looked to get the ball to this area when the situation arose. 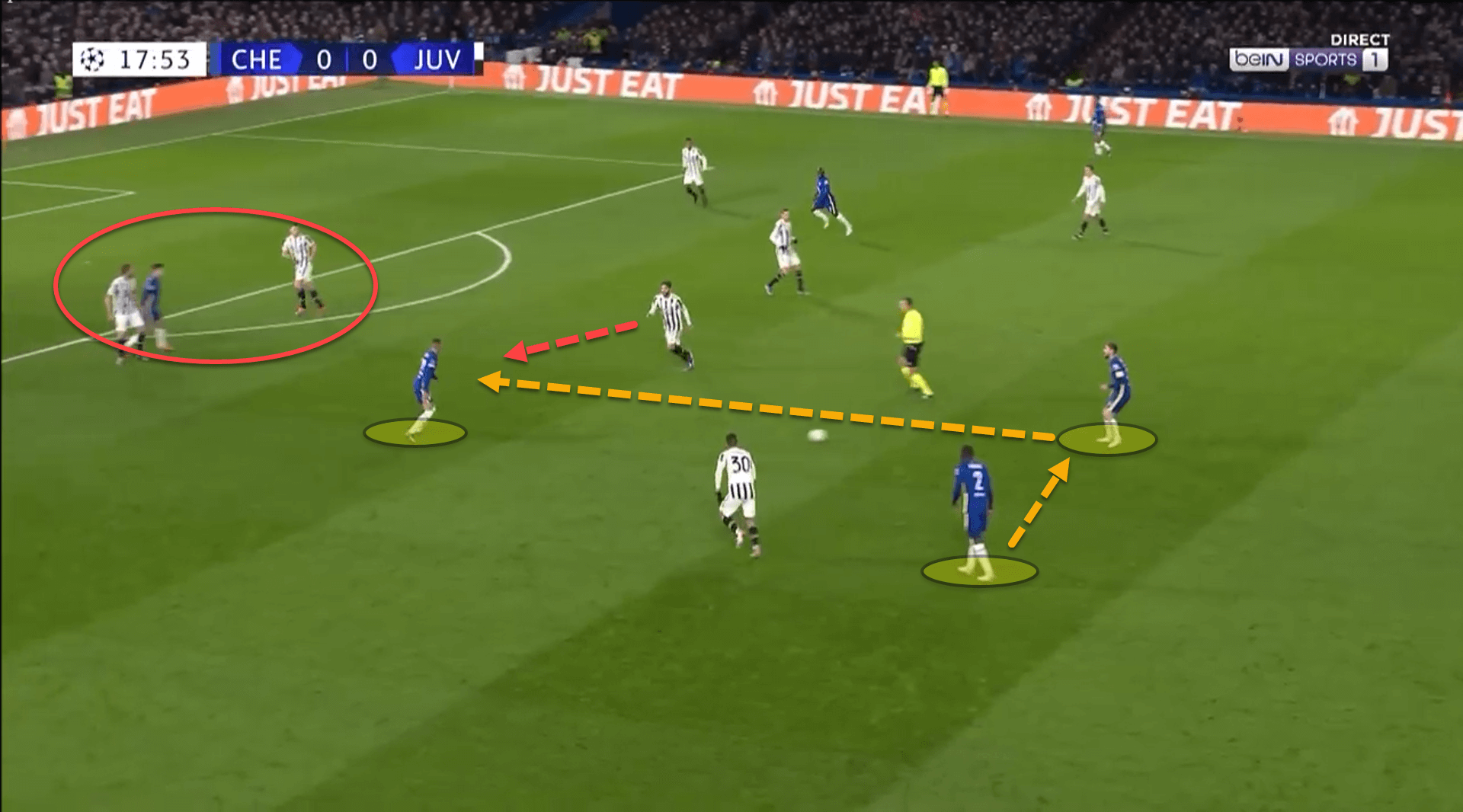 In this example, Bentancur has put pressure on Rudiger, successfully applying a cover shadow that has blocked the passing lane to Ziyech. Rudiger simply squares it to Jorginho who then found the Moroccan international.

Manuel Locatelli has not closed the space, which he should have done and Pulisic has also pinned the two central defenders of Juventus meaning they were unable to come out to close down Ziyech. This is excellent work by Chelsea to notice lapses in the Bianconeri’s defensive block and exploit them.

By Juventus switching to the 4-3-1-2, it rectified this as the front three pressed Chelsea’s backline while the three central midfielders stayed compact, but the damage had already been done.

Chelsea sat in a mid-block for the most part and went man-to-man with their midfield and forward line against Juventus’ midfield and backline.

Pulisic led the press and the objective from Tuchel’s side was to cut off access to one side of the pitch and stay tight to their markers in order to turn over possession of the ball or else force the Old Lady to go direct to the centre-forwards.

Once Pulisic had cut off access to one of the central defenders and the ball was played out to the flanks, Chelsea would be aggressive and use it as a trap to win back the ball. 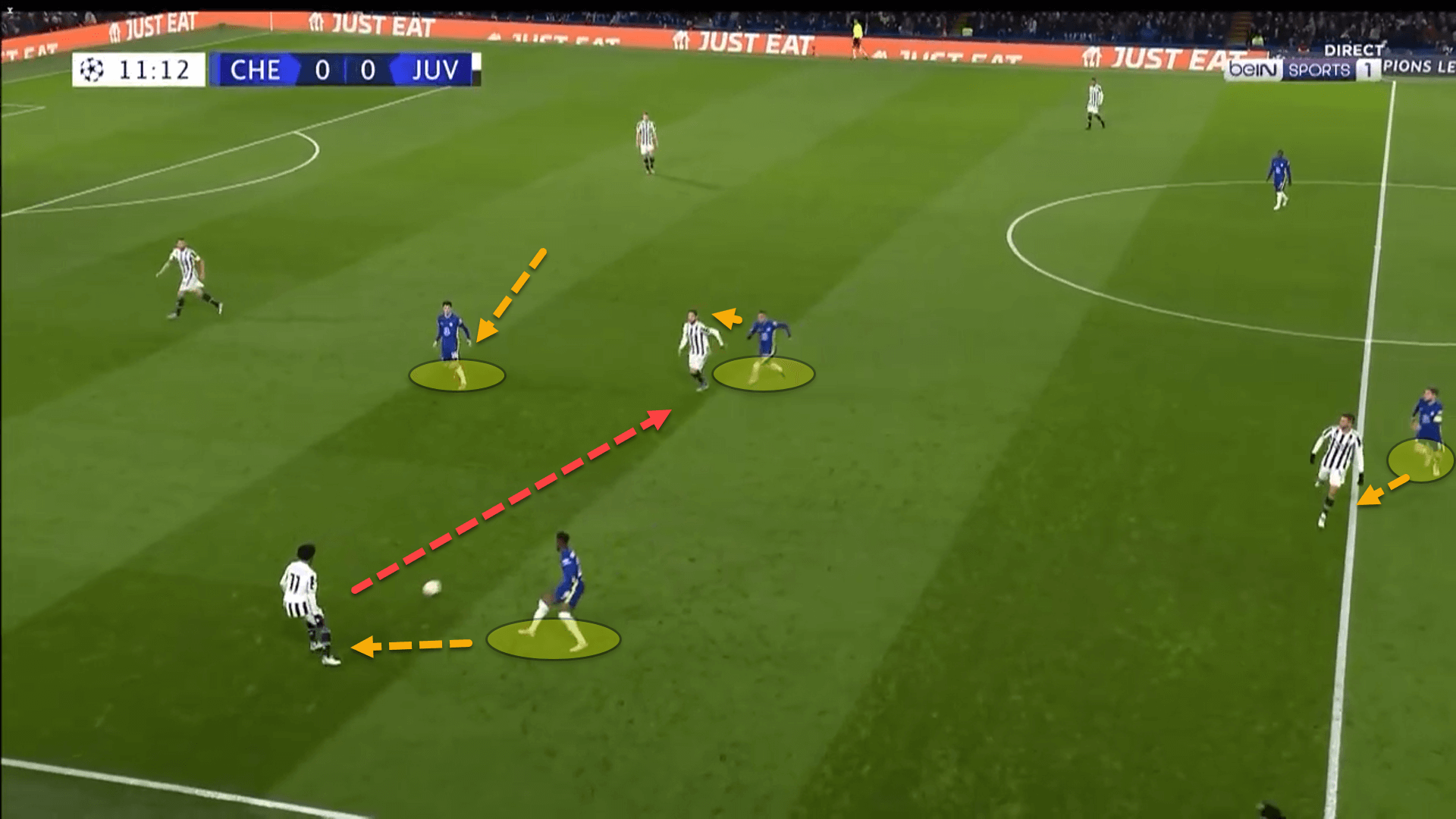 In possession, Locatelli was always the deepest midfielder for the visitors with Bentancur pushing higher. Ziyech was tasked with staying tight to Locatelli as Juventus looked to use him as the focal point in order to reach higher areas of the pitch with their play.

Ziyech performed this role really well while Jorginho would then stick to Bentancur in order to prevent him from receiving the ball. Finally, Hudson-Odoi would press Cuadrado, angling his run to force him to play inside to Locatelli where the Italian midfielder was met by Ziyech. 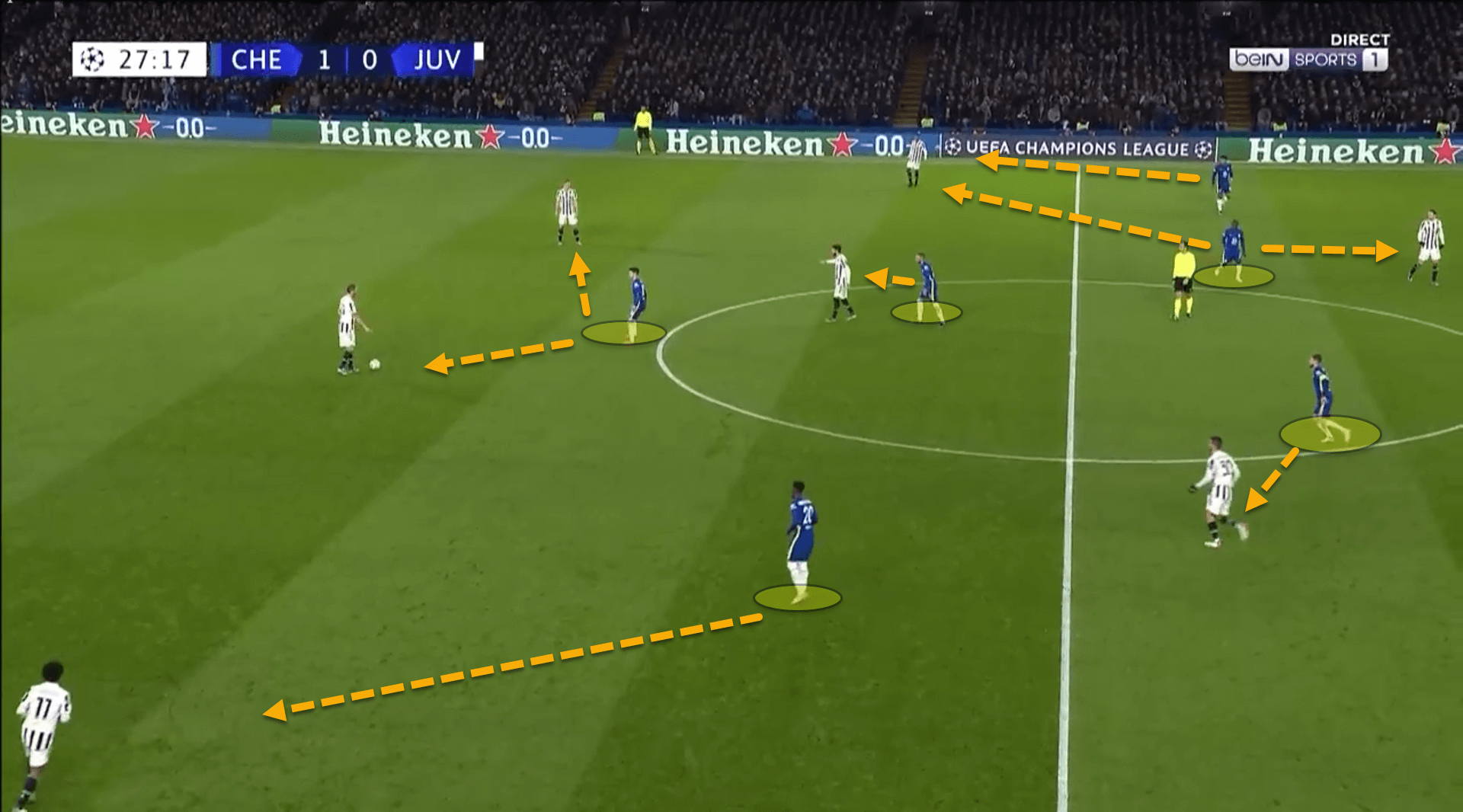 Kante, and later Loftus-Cheek, were given quite a hybrid role in this phase. If James was pinned back by a Juventus forward, the pair were tasked with pressing Sandro at left-back.

However, if James was free to mark Sandro, they would mark Rabiot who generally pushed up between the lines. The defensive shape from the European champions was a slightly lopsided 5-2-3 or 5-2-2-1 but was effective nonetheless in preventing Juventus from getting any rhythm to their play.

If Juventus did play long and try to reach the centre-forwards, Chelsea’s centre-backs were extremely aggressive in closing them down before they could receive the ball and turn. 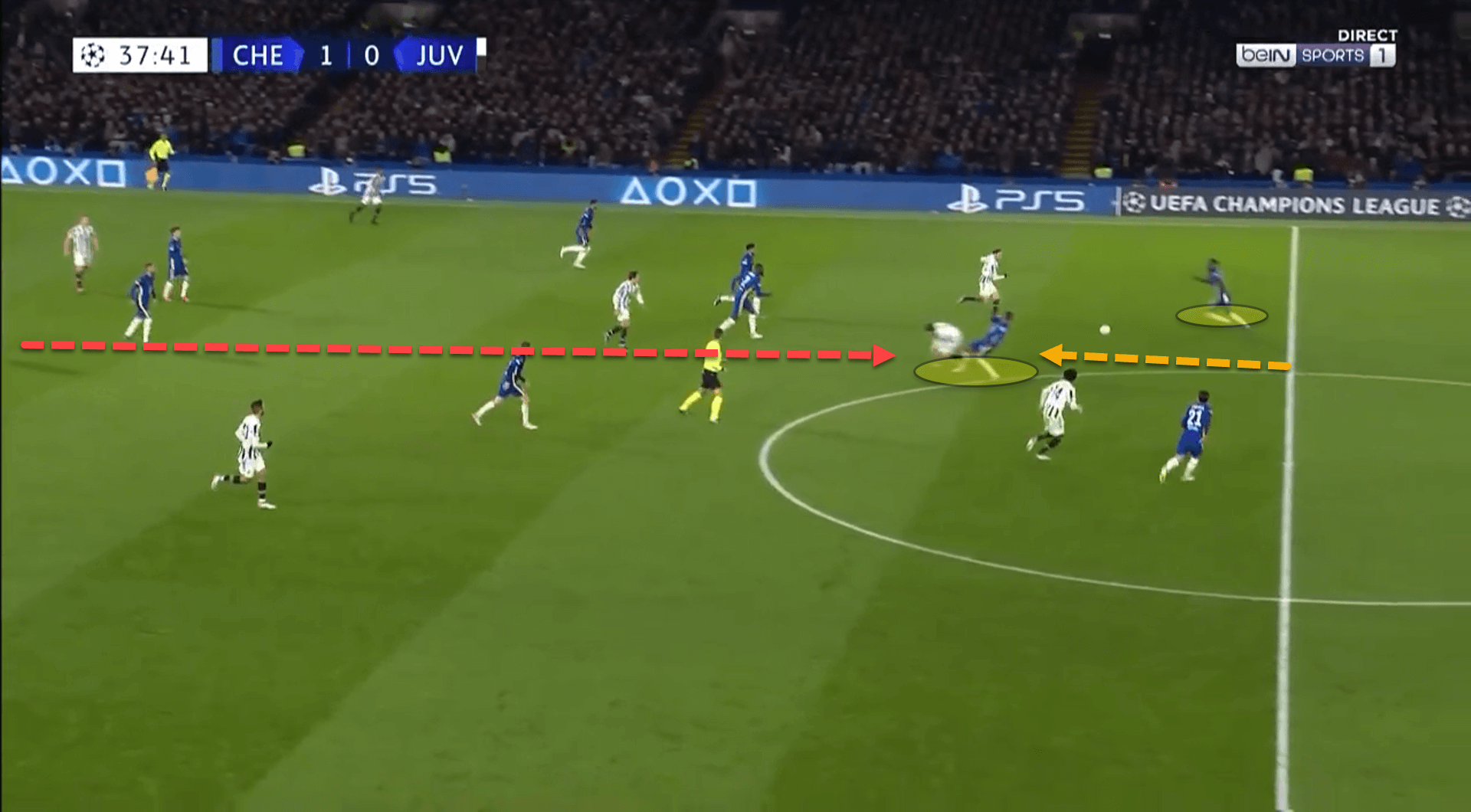 For example, here, the centre-back played long to Morata who dropped to receive. Thiago Silva followed his man and aggressively challenged him in a deeper area, winning back possession for Chelsea.

Chelsea were so effective in almost every phase. Juventus created very few chances and finished with an xG of 0.42. While Allegri’s men were below-average through their own individual faults and a flawed tactical set-up, nothing should be taken away from Tuchel and his side.

The German coach masterminded arguably what was one of the greatest European performances for the London club and Chelsea walked away in style with a 4-0 victory.